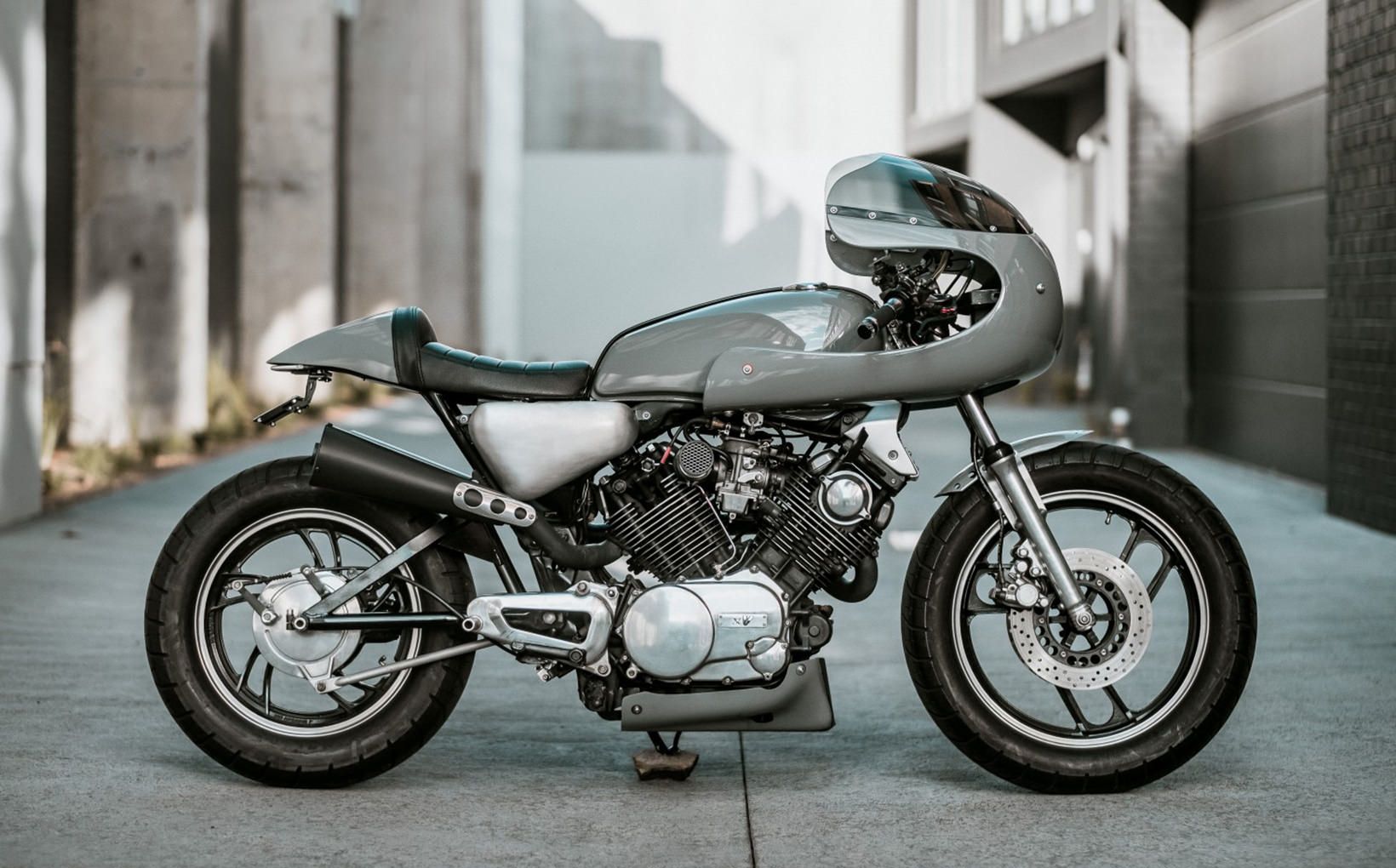 The Yamaha Virago was one of the most important new Japanese motorcycles of the 1980s, but you may have to look several times at the images accompanying this story to identify Michael Capraro’s sensational bike as an early model XZ750 Virago!

In 1980 Yamaha revealed a completely new style of Japanese motorcycle for model year 1981. By 1980 Japanese machines generally used four-stroke four-cylinder engines and were sports-oriented. But Yamaha’s product planners had identified strong demand, especially in the US, for the chopper style of cruiser – raised pull-back handlebars, stepped seat, copious chrome –favoured by customisers. Essentially, they decided to combine this look with a V-twin engine just like a Harley-Davidson and a budget price. The Yamaha XV750 Virago also boasted shaft drive, single rear damper and alloy wheels. By suspending the engine from the stamped-steel backbone frame as a stressed member, the engineers gave the handsome V-twin an ‘open-air’, Harley-style appearance. This unique Japanese motorcycle succeeded immediately in the US and elsewhere. It endured in production with a range of different engine capacities through until 2007.

Has any Virago owner in the world gone to such lengths to give this classic Japanese machine an authentic café racer look? Indeed, the upward-angled fuel tank was such a key element in the Virago’s visuals that Michael’s beautiful, fully-faired cruiser is extremely hard to identify by make and model. 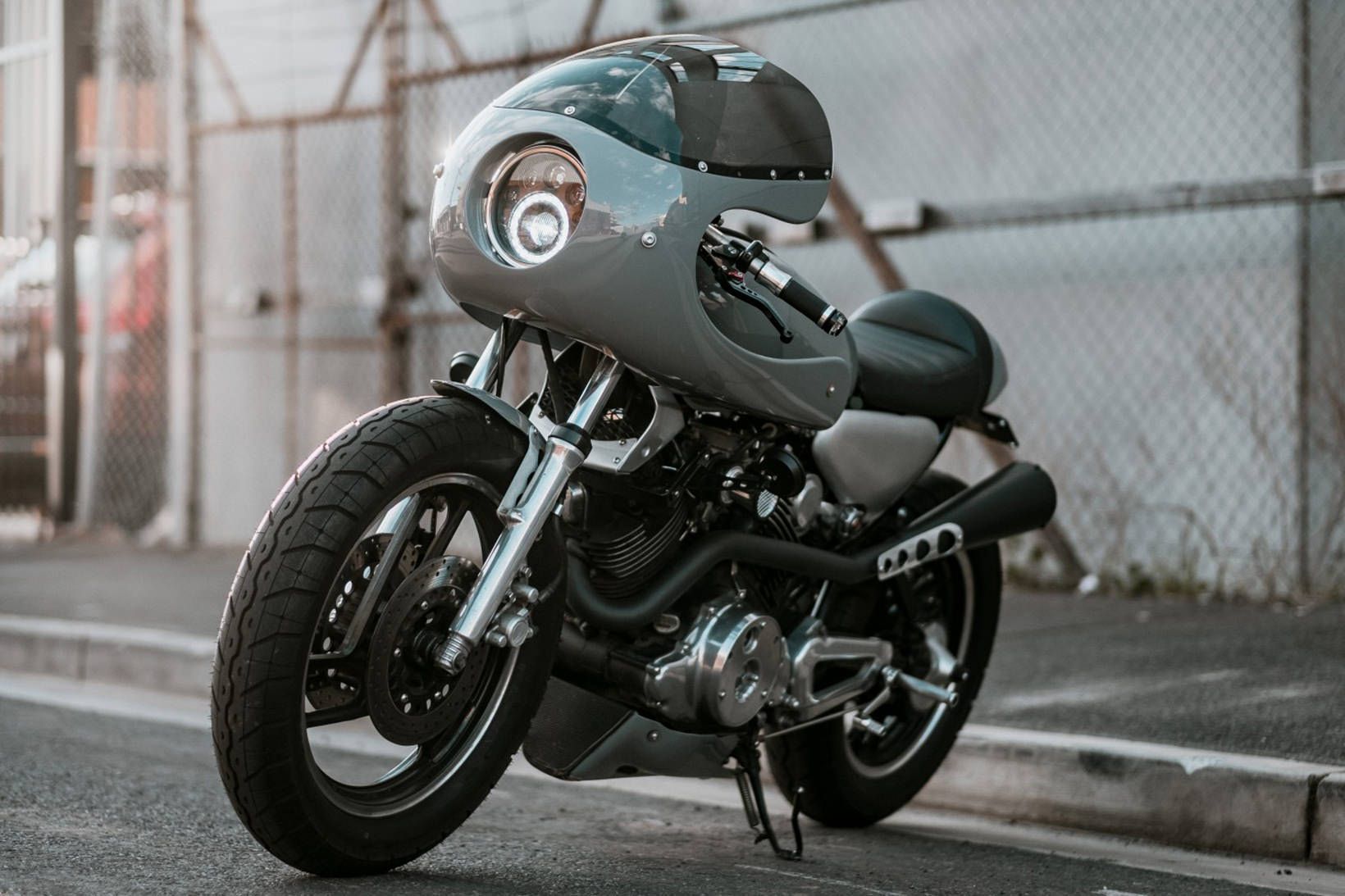 For many years Michael had wanted a café racer in the Ducati style and when a friend of his acquired a 2008 Ducati Sport Classic 1000S with full fairings, his dream acquired a more definitive shape. He saw this Virago advertised and caught the train from Melbourne to Hamilton with his helmet gloves and a bundle of cash. Hamilton in Victoria’s Western District is not far from the South Australian border. Michael duly purchased the bike and rode it five hours home. The ride home was uneventful except for the fact that the engine was running rich and consumed an excessive amount of petrol but Michael was very happy with his purchase.

Much of the attraction for Michael was that the previous owner had already started the Virago on the café racer road, by modifying the look so that the tank and the seat were horizontally aligned, a key trademark of the genus. At the time it was metallic orange and although in good mechanical condition was not, says Michael, a machine you would necessarily garage.

Striking as the metallic orange paintwork undoubtedly was, it didn’t accord with Michael Capraro’s vision. One of the first things he decided to do after riding the Virago around for a few weeks was to change the colour. While many of us would be trying to choose from among a range of choices, it was different for Michael who settled immediately on the very cool modern Porsche/Volkswagen/Skoda colour Nardo Grey. Ashley McGrath of Seaford repainted the Yamaha in this colour with plenty of coats of clear coat to finish the job to perfection. 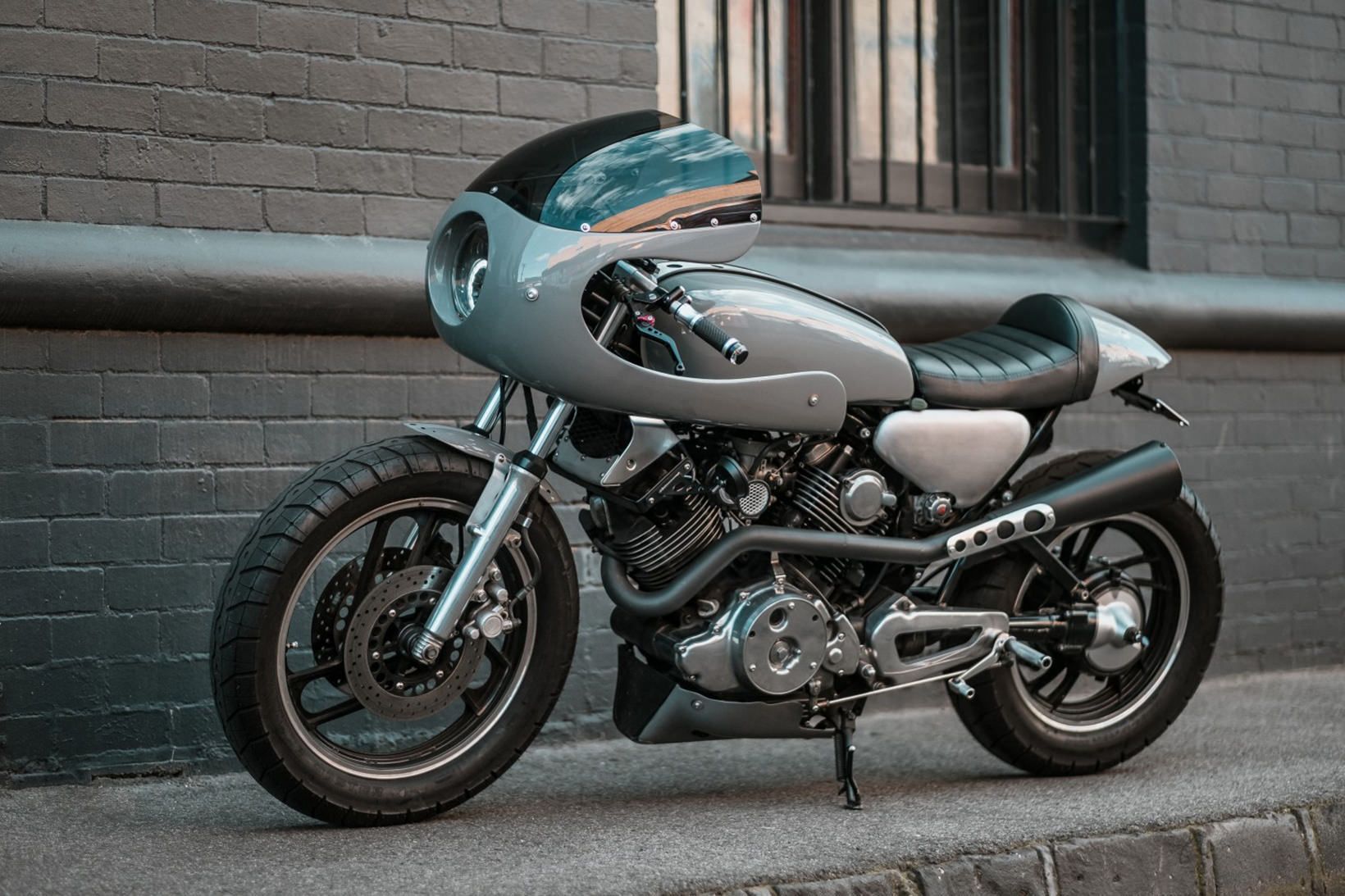 Michael took the opportunity provided by COVID-19 to complete the long process of reimagining this motorcycle – manufactured in 1980, which means it is one of the earliest Viragos – as an ultra-contemporary café racer. This work took some 18 months and while most jobs were handled by others Michael did the fine-tuning, cleaning up and some of the mild modifications himself.

While it may not have been Michael’s plan to modify the bike to such an extent, he acknowledges that ‘I ended up changing everything!’ His original thought had been that he just wanted ‘something that looked like a café racer’, but he soon realised that he wanted to create something unique.

He wanted to transform his Virago into a fully-faired café racer. ‘When you want to convert a naked bike into one with a full fairing, it’s quite involved,’ he says. ‘You don’t just stick on a fairing and hope for the best! There is no point in building a custom bike if it’s not done properly; you can’t leave things half done.

‘A 1980s bike needs a 1980s fairing, so I went online and started looking.’ He found a US-based company called Airtech Streamlining who offered a Ducati 900SS fairing. Even though Michael was sure modifications would be needed, he went ahead and imported it. It was painted white and, amazingly, was neither too wide nor too fat for the Virago. But he did have to get a brace made to sit underneath the petrol tank and Matt McLeod of Krank Engineering in Albion, a specialist builder of custom motorcycles handed this challenge. ‘The way he did it was amazing,’ says Michael. McLeod also made the side covers and the mirrors.

The headlight brace came with the fairing. Michael explains that because everything turns with the steering it is quite a complicated process to ensure the headlight mount doesn’t get caught by the brake and clutch cables. The fairing also includes wiring for the horn.

Once the fairing had been successfully matched to the bike, it was pulled off again and everything got painted including the belly pan. 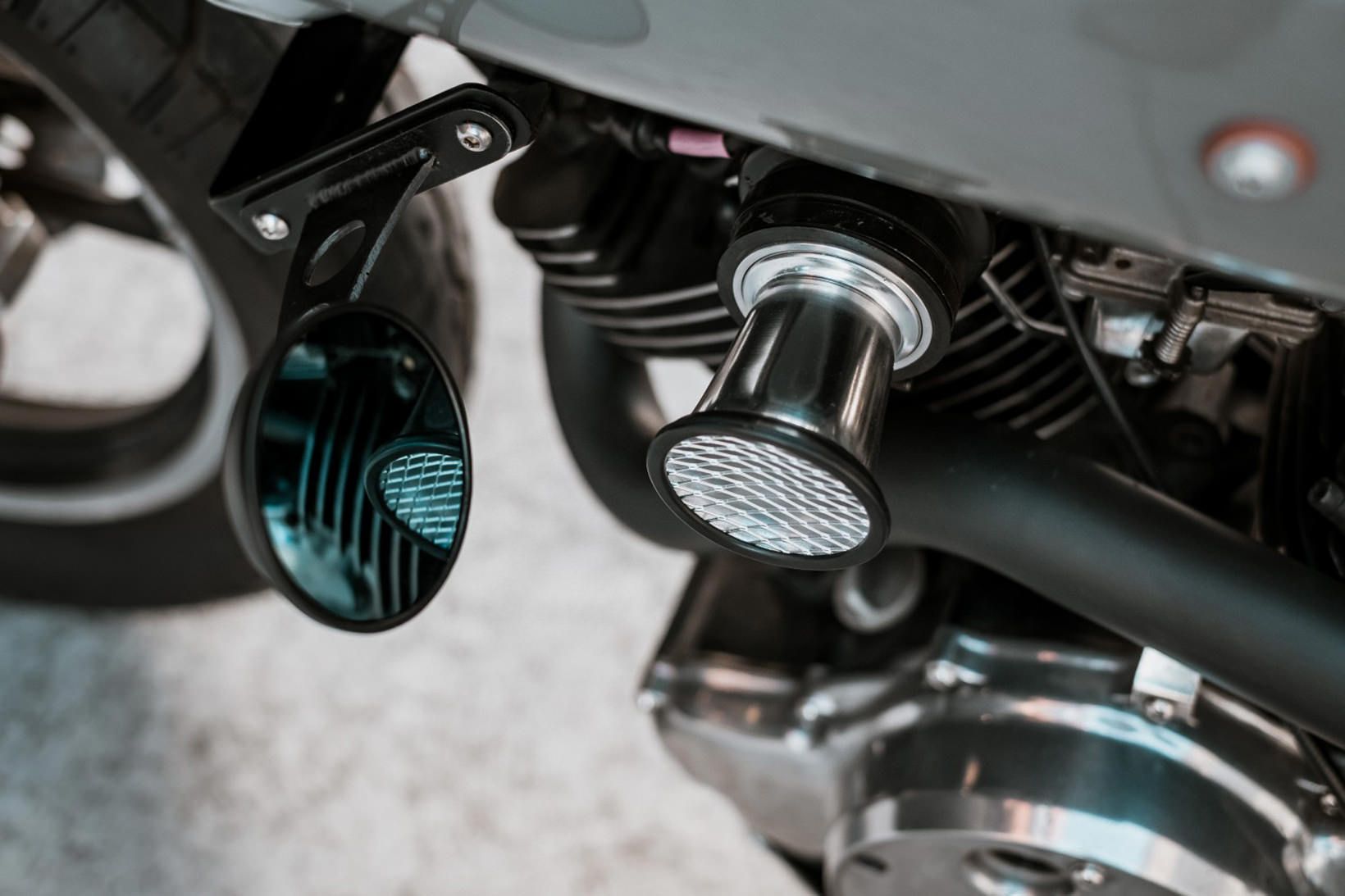 Because the V-twin motor had been rebuilt and upgraded internally by the previous custodian, Michael saw no need to pull it down. But he asked Keith West to rebuild the carburettors with bigger jets and custom-made chrome velocity stacks to admit a greater volume of air. West then took it to Mick Hone Motorcycles in Ferntree Gully for dynamometer tuning.

The brake reservoir and hand-made braided hose was done by Benzina Garage in Preston.

A mate of the previous owner had made the exhaust and when the Virago was ready to get sprayed, Michael took it off and got it ceramic coated.

The bike has a great exhaust note, he says. The motor itself is very smooth and has great lowdown torque. ‘It’s fantastic to ride,’ he says.

Those wheels were so cool in 1980 that they still look great on Michael’s Virago. They are shod with (slightly wider than the original tyres) Shinko Tour Masters. 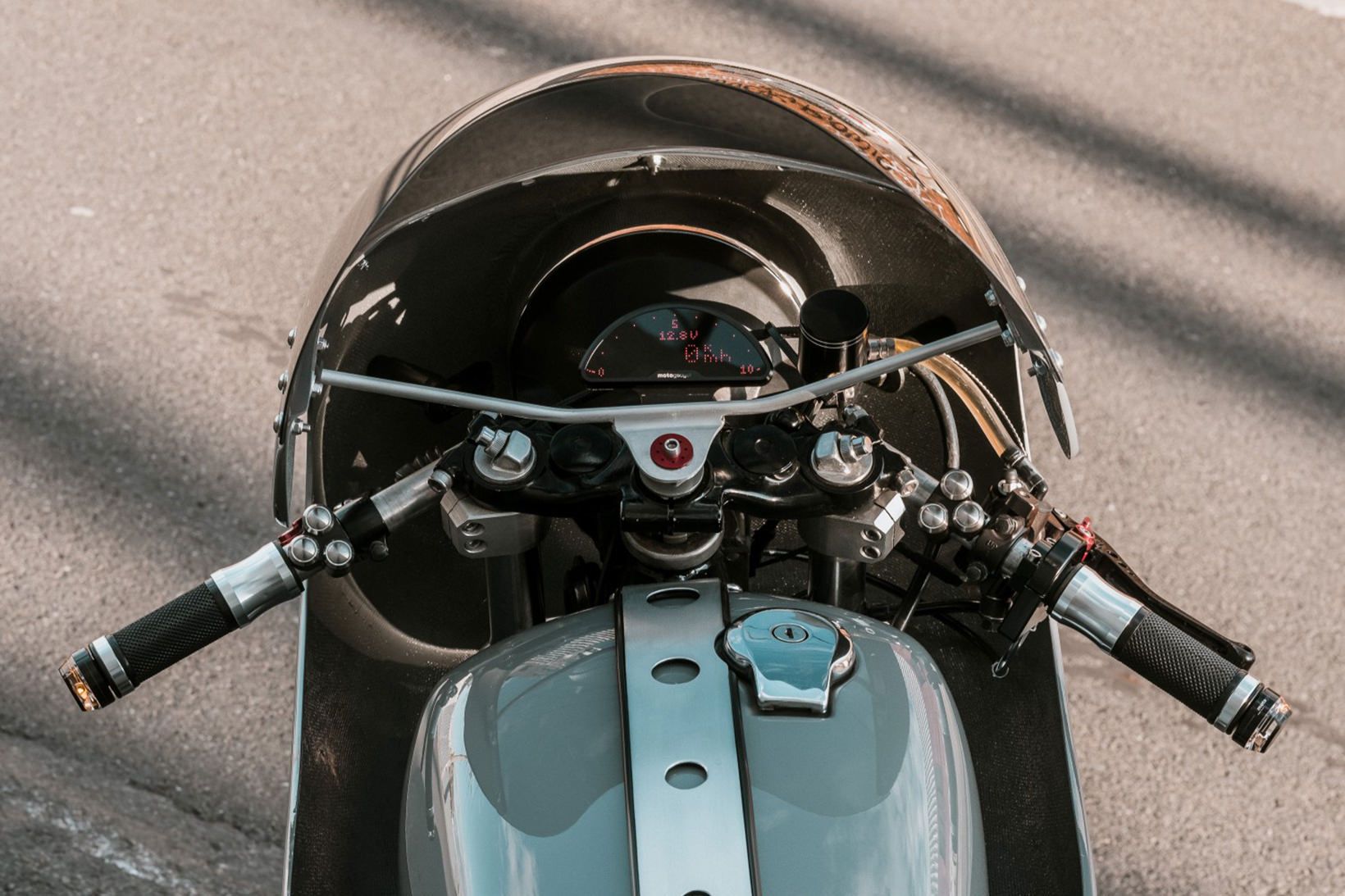 A magnificent Motogadget instrument display – great value at just $800! – is one of the standout elements of a first-class modern custom job. Michael has also incorporated a trip computer with a range of readouts including average fuel consumption, voltage, rpm and more. Aluminium switches on the bars operate the indicators and horn. The motorcycle has keyless start via a fob. It even has Bluetooth for Michael’s phone which features an App with which he can start the bike from a distance. To look down from a height at the bars and the instrument display is to see immediately just how exhaustively Michael Capraro has gone about the job of reimagining the Virago to suit his unique vision. So different does this custom café racer look that it is difficult to believe that it retains the original fuel tank – that’s how much difference the alignment in combination with the paintwork makes!

There are LEDs for the number plate and tail lights were sourced from Revival Cycles in the US. 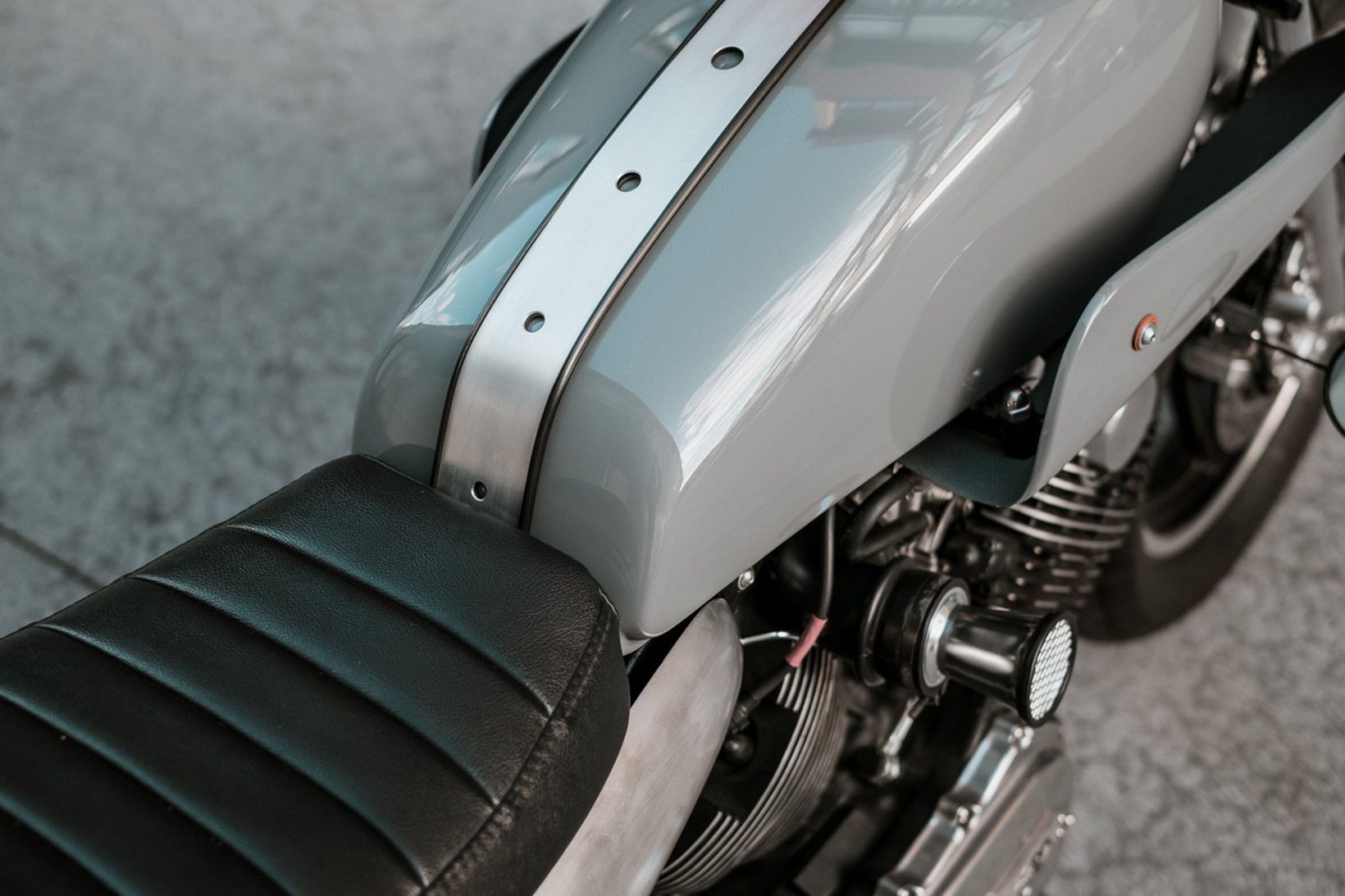 For a very few hundred dollars, Savvas Upholstery in Mt Waverley retrimmed the seat and packed in high quality foam to suit longer spells in the saddle, although so far the longest ride Michael has undertaken was the initial trip home from Hamilton.

One of the most disappointing experiences of the rebuild came with the new windscreen to suit the fairing. Michael found a US company called Airtec who actually stocked what he wanted. He ordered one of these for $400 plus shipping and it came supplied with a special drill to make tiny holes. Michael cracked the screen during this drilling process. Not (too) deterred, he ordered a second screen and, unbelievably, the same thing happened again when he was drilling the final hole. So he approached Peter’s Screens in Reservoir, who custom-made one, low, tinted and very affordable at $300 fitted. 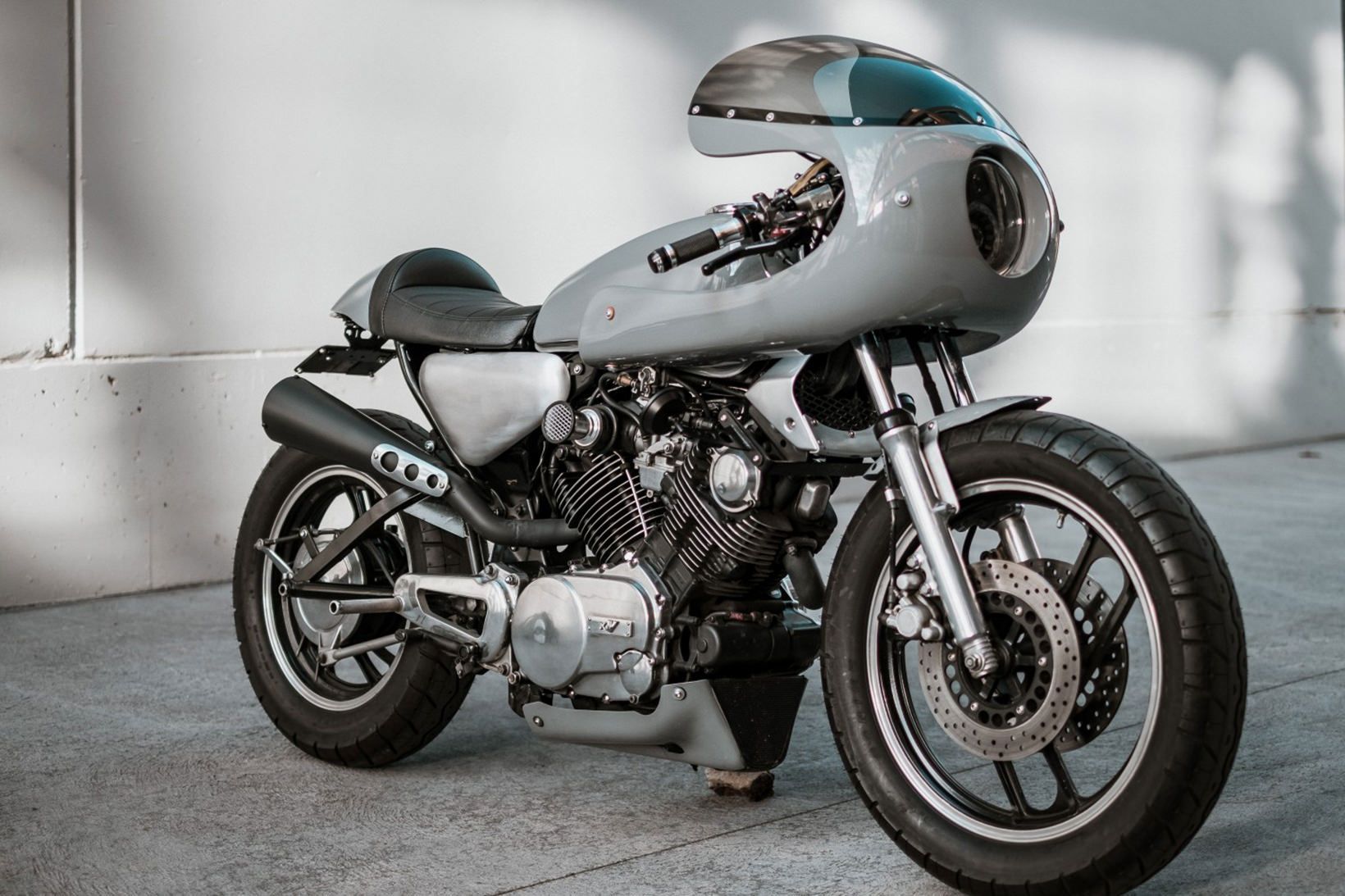 This café racer is perfect from every angle!
(Image: Jason Lau Photography)

Michael has two other motorcycles, a 2013 Royal Enfield 500 Classic and the aforementioned 2008 Ducati Sport Classic 1000S, which he acquired from his friend. Even though this very Ducati provided the inspiration for his Virago rebuild, it is the Yamaha that has pride of place in his shed and is the one he usually opts to grab when he fancies a ride.