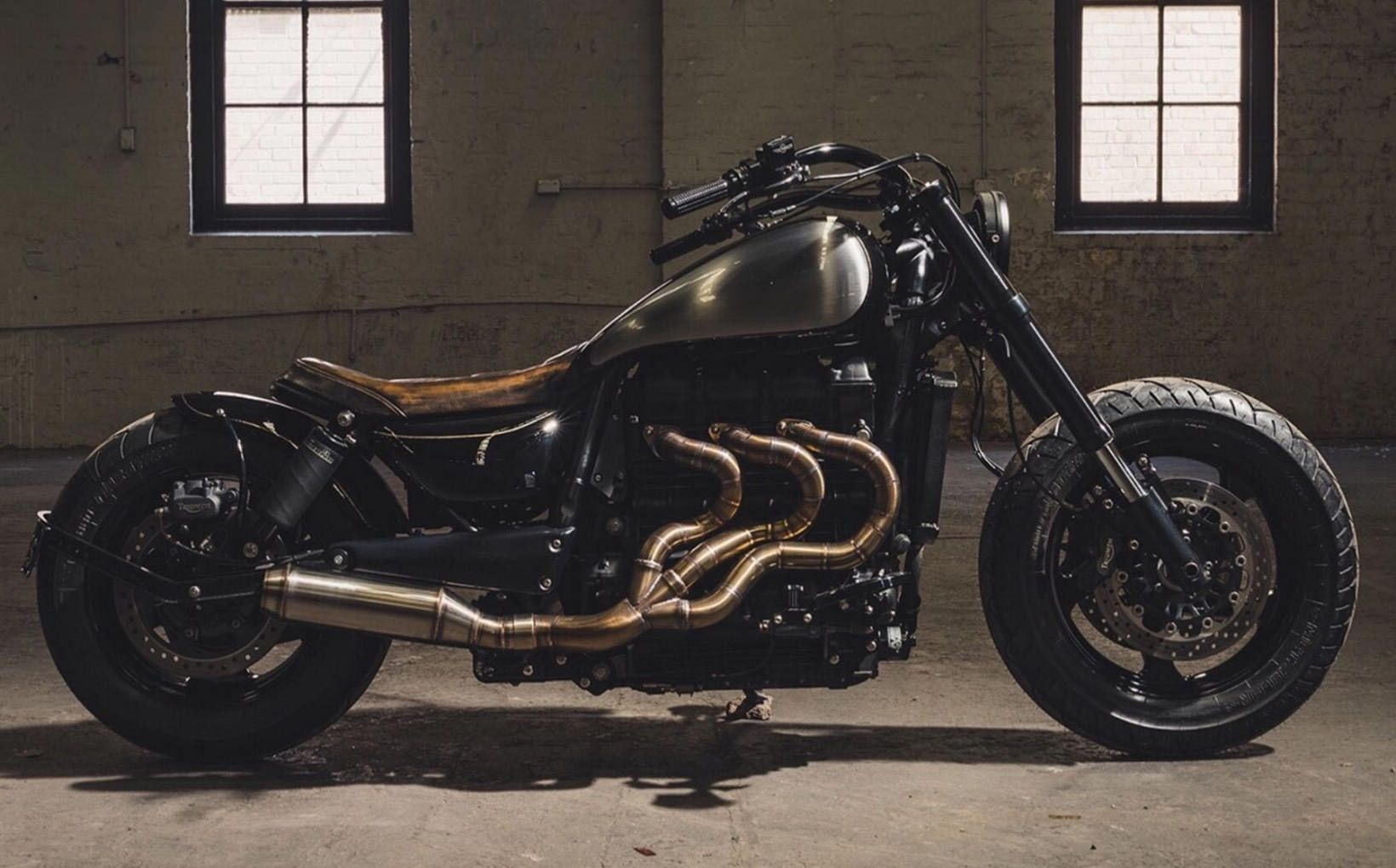 Even the stock standard Triumph Rocket 3 is an utterly charismatic motorcycle. American Motor Cycle News raved about it when it was released in the noughties: ‘The Triumph Rocket III is an incredible experience and bravo to Triumph for making it. Compared to a Harley, the Rocket III is a steal. It’s better braked, faster, handles better and it’s British.’ The name comes from the BSA Rocket 3 of the early 1970s, a badge-engineered variant of the legendary Triumph Trident. The Trident was perhaps the standout British motorcycle in the years when the Japanese industry was coming of age and Triumph’s market research revealed strong nostalgia for the three-cylinder superbike. The new-generation Rocket 3 was perfectly conceived to appeal to baby boomers who were coming of age when the Trident was new. You can even buy a special Bobber edition of the Rocket 3.

But no factory machine can come close to the unique Black Bess creation you see here.

Black Bess started life as a 2010 Rocket 3 roadster. But owners Maris and Leanne Caune decided to call it a 2018 model because that’s when the 18-month rebuild by the Gasoline Motor Company of Sydney was finished. Essentially, it’s a whole new motorcycle. 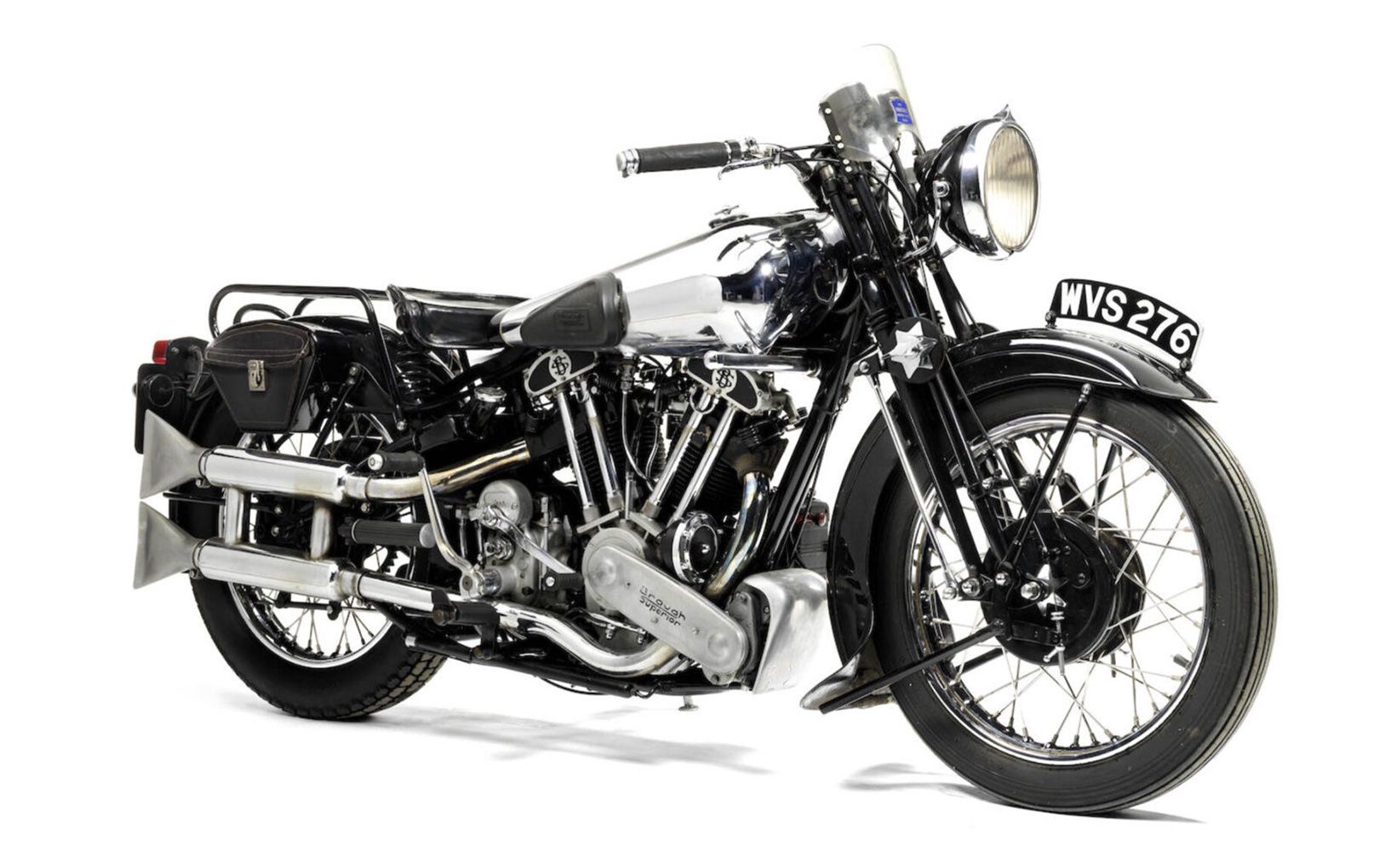 The Brough Superior launched 103 years ago inspired this Rocket 3 bobber.

Black Bess was eighteenth century London highwayman Dick Turpin’s legendary horse in Harrison Ainsworth’s 1834 romantic novel Rookwood. There is plenty of myth-making about Turpin (1705-39) but who cares: sometimes the story is what matters! Whether the real-life Turpin actually rode 320 kilometres from London to York in one night (on a succession of horses) or not hardly matters. Perhaps more to the point and inspirational for Maris and Leanne was a Brough Superior S80 motorcycle sold at a Bonhams auction in 2012 which rejoiced under the name of Black Bess. Maris acknowledges that his Rocket 3 bobber represents a homage to this example of the renowned Brough Superior. The model was launched in 1919 and was more expensive than a typical London home of the day. T.E. Lawrence (of Arabia) had his fatal crash on one on 16 May 1935.

The black/gold livery and distressed steel look was inspired by the Bonhams Brough. As for the logo on the tank, it’s a re-creation from the 1901 Triumph original. 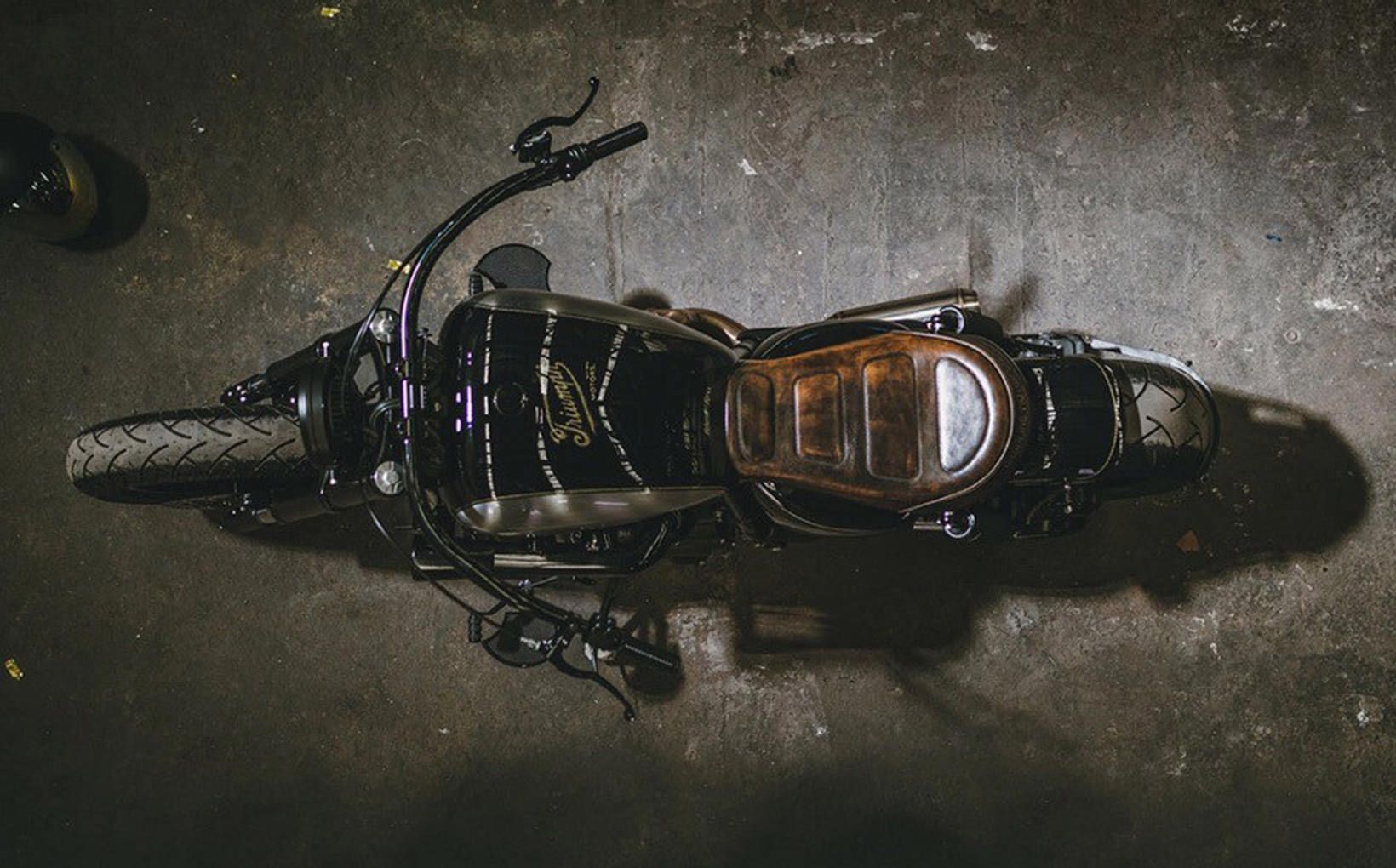 From above, the superb spare streamline theme of Black Bess is evident.

Maris and Leanne Caune love motorcycles, but sadly at the moment neither of them is able to ride one. Both were involved in road accidents. His was off one of his motorcycles in January this year. He broke his leg in four places and is still recovering but hopes to be back on the bike by year’s end. Leanne’s almost killed her a decade ago. She was taken out by a driver who crossed onto the wrong side of the road. She spent seven and a half months in hospital, three and a half of them in traction. ‘We wanted to do something together,’ says Maris, ‘using some of her insurance payout. We are both creative and we wanted to develop a unique investment that we could share. Bess only happened because Leanne nearly died. Think about it: if you’re driving home from work one Thursday afternoon and this happens, what is there to lose and why hold back? Also, if you can add some wow to the world, why not. There is nothing else around like it. Some may ask why, but we say why not.’

‘Some wow to the world’ is surely an understatement when it comes to evaluating this superb one-off bobber. Perhaps the initial inspiration was supplied by Wenley Andrews’ custom 2008 Rocket 3 café racer. ‘I thought, well, that’s pretty funky, I like that but I like the Bobber thing even more.’ And there was the Bonhams Brough Superior.

It is easy to see that Maris loves British bikes. His Latvian father Janis, now 91 and living with Maris and Leanne, rode either British bikes or BMWs for the British army in Germany in the early postwar years and the love of big British bikes began with the stories his father told.

The exhaust is one of the standout features of a first-class custom motorcycle.

Black Bess is an apt name because it conjures a mare in full flight. Maris talks about how when you look at a galloping horse it is slick and beautiful from any angle. When his bobber was completed after an 18-month build, the proud owner sat in a range of positions around it for up to 15 minutes each time and from every vantage point it just looked right. ‘Your eye slides off it from one element to the next and it looks fast even when it is stationary.’ The first thing to strike the astonished viewer is probably the magnificent sinuous gold exhaust system which tones in perfectly with the single seat, along with the superb curvature right through from the tank, seat and over the rear wheel: this motorcycle looks like a living creature, crouched and ready to leap. 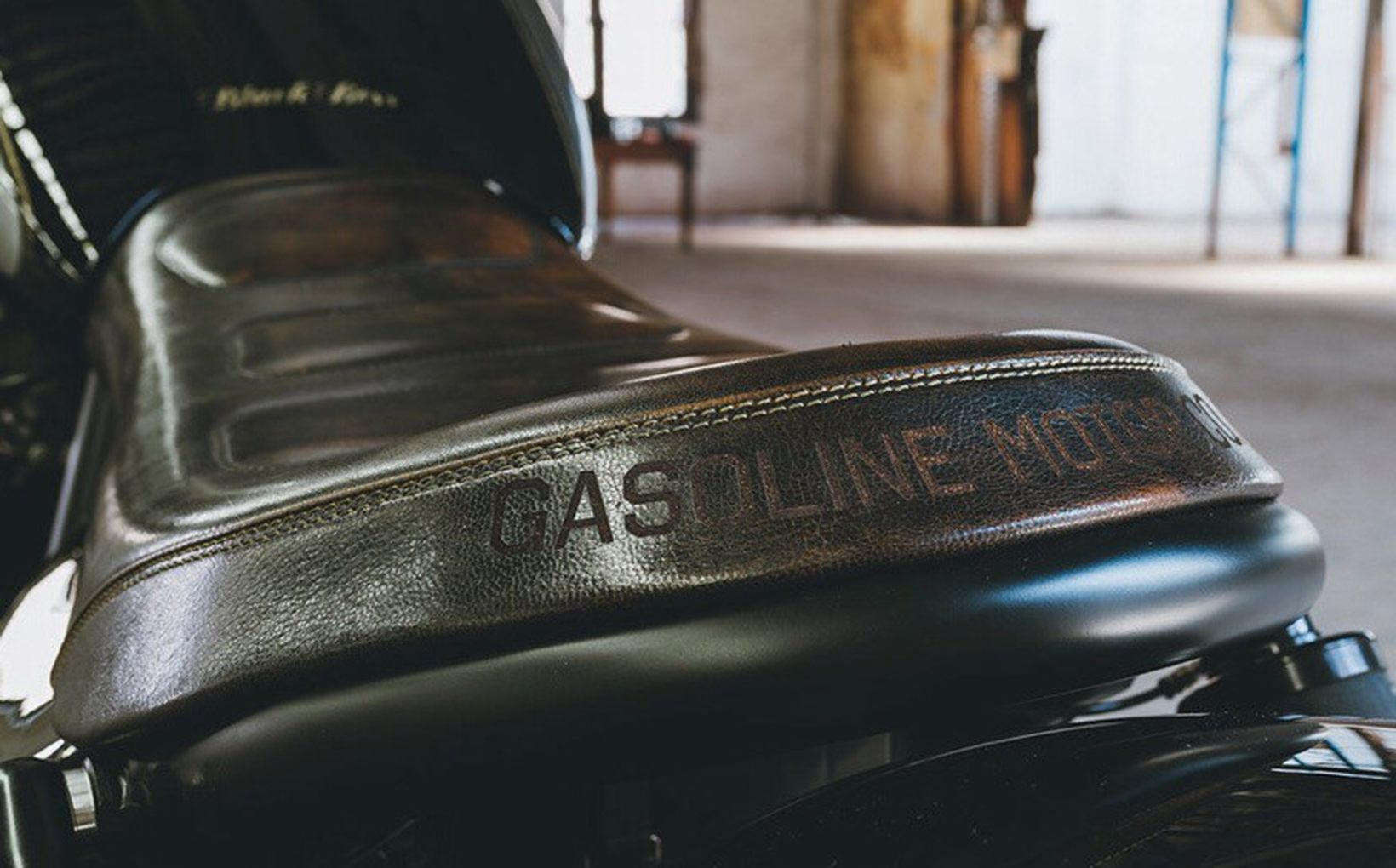 Credit where it’s due.

Bobbers like café racers are very much in vogue but the former is more extreme. Café racers are pretty much linear from front to back with an enclosed front fairing and narrow bars. In essence, the bobber is a single-seat café racer stripped down to a minimum weight and with maximal power to weight ratio. Virtually everything that can be stripped off is and you have almost a naked bike. Maris says it’s about ‘what you take off and how you take it off and what you do with what you have left’. Legislation insists, for example, on a front mudguard but there is no ruling on the size, shape and weight of that item. A factory 2018 Triumph Rocket 3 hits the scales just a couple of kilos shy of 400 but Bess weighs just 186kg and almost precisely half of this (92kg) is the 2.3-litre engine! The Rocket 3’s engine is an integral part of the frame. This was the largest engine on any motorcycle until Triumph came out with a 2.5-litre unit for the new Rocket in 2019 to meet more stringent European emission standards. It is a remarkable achievement to save so much weight! 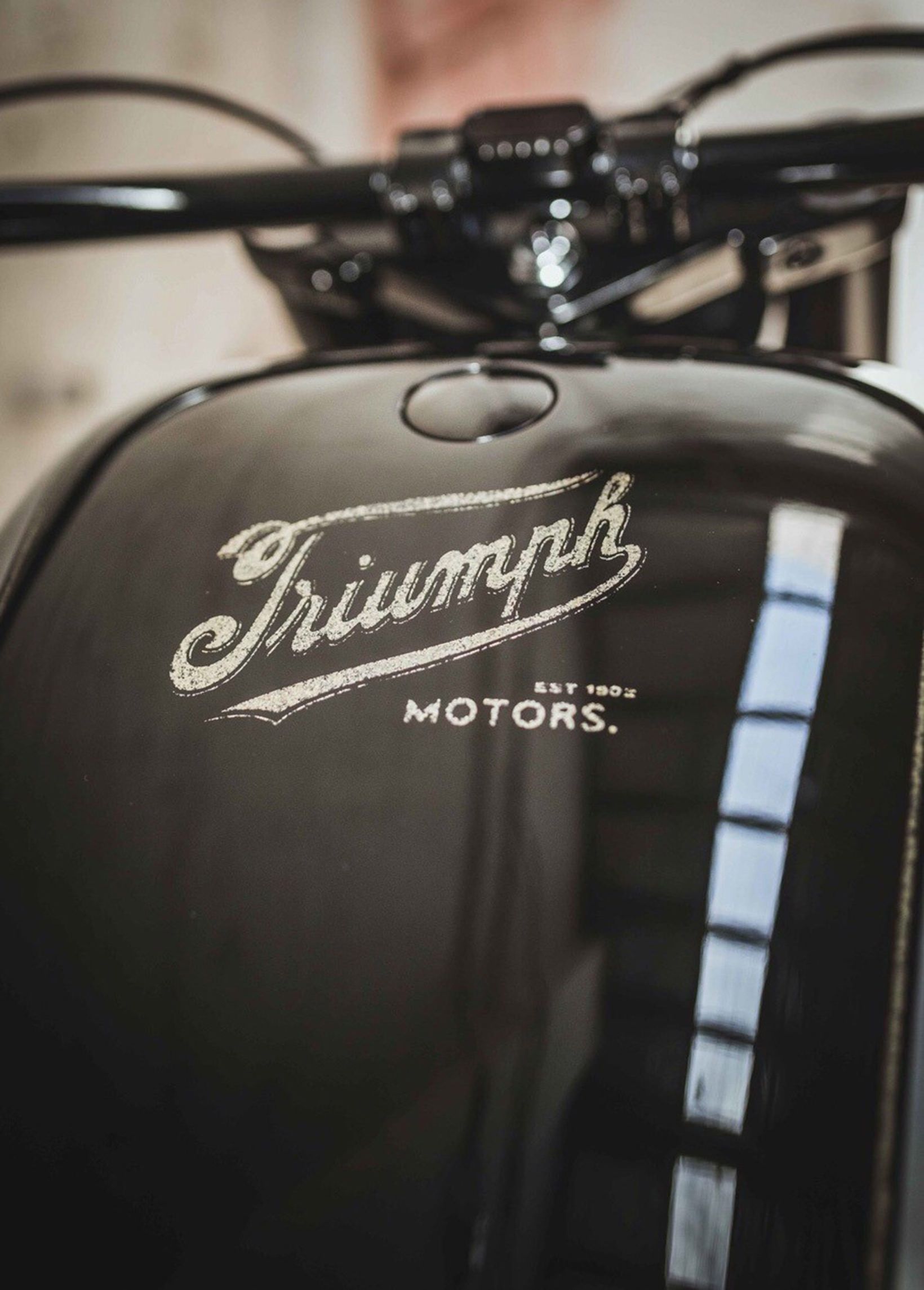 Black Bess was down to the vision not only of its owners but also the Gasoline Motor Company.

The wheels are stock but black/chrome powder-coated. Forks are standard. The tank was reduced to about half its size with the pan original but the top section was customised. Born in 1968, Maris was a 1970s kid who loved the cowhorn handlebars of the dragster bikes and these provided the theme here. 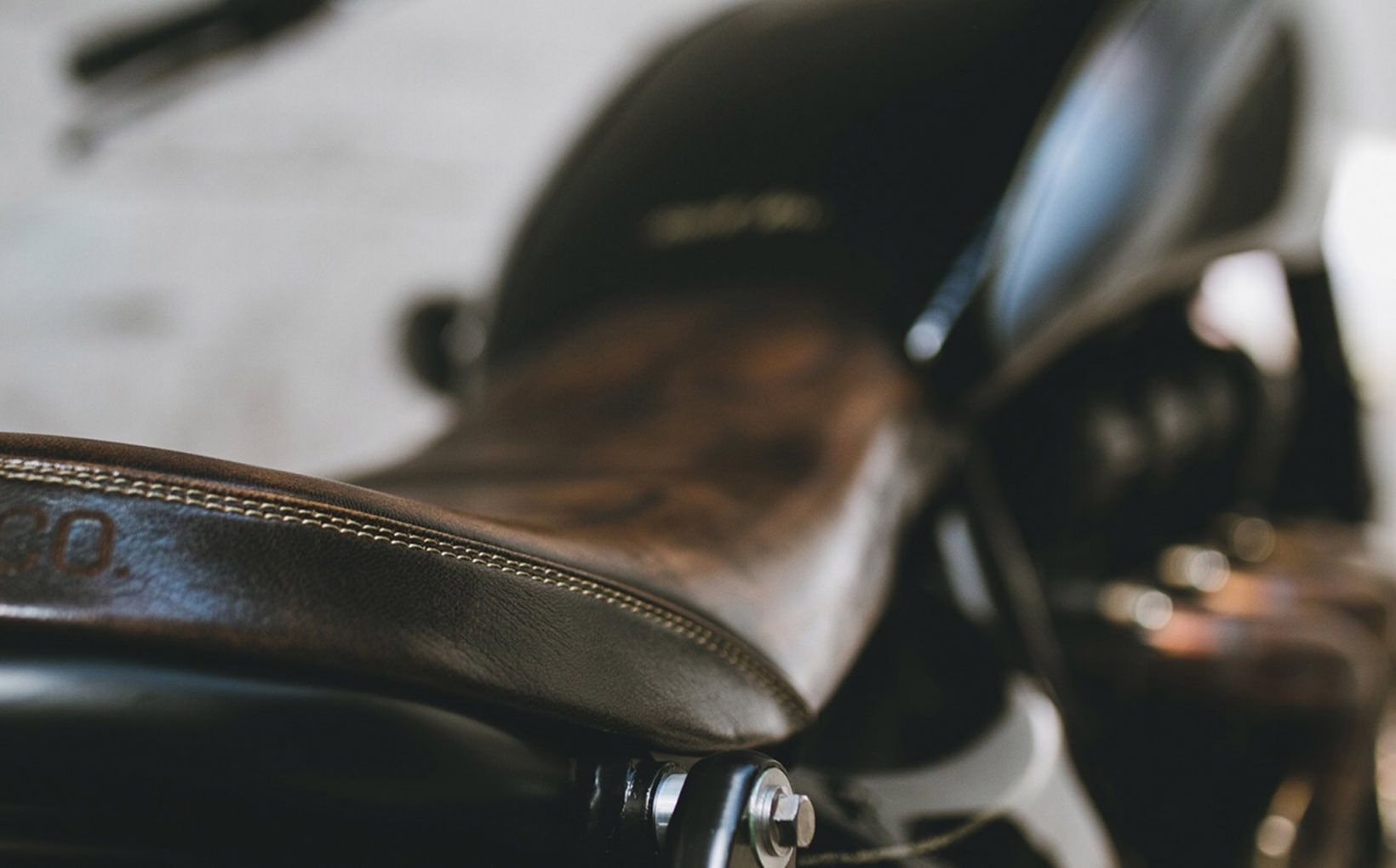 Many details of this build pay homage to Brough Superior.

As with so many of us, it is what we love in childhood that inspires us later. A child of new refugees, he grew up with the habit of never throwing anything away. ‘I was always forced to think outside the square,’ he reflects. ‘I’ll give it a go myself before I pay someone else. I have multi-skilled myself and have a plethora of information in my head!’ His Bouncer Upcycles YouTube channel is worth a look. Maris reimagines McLaren wine barrels as bar furniture. 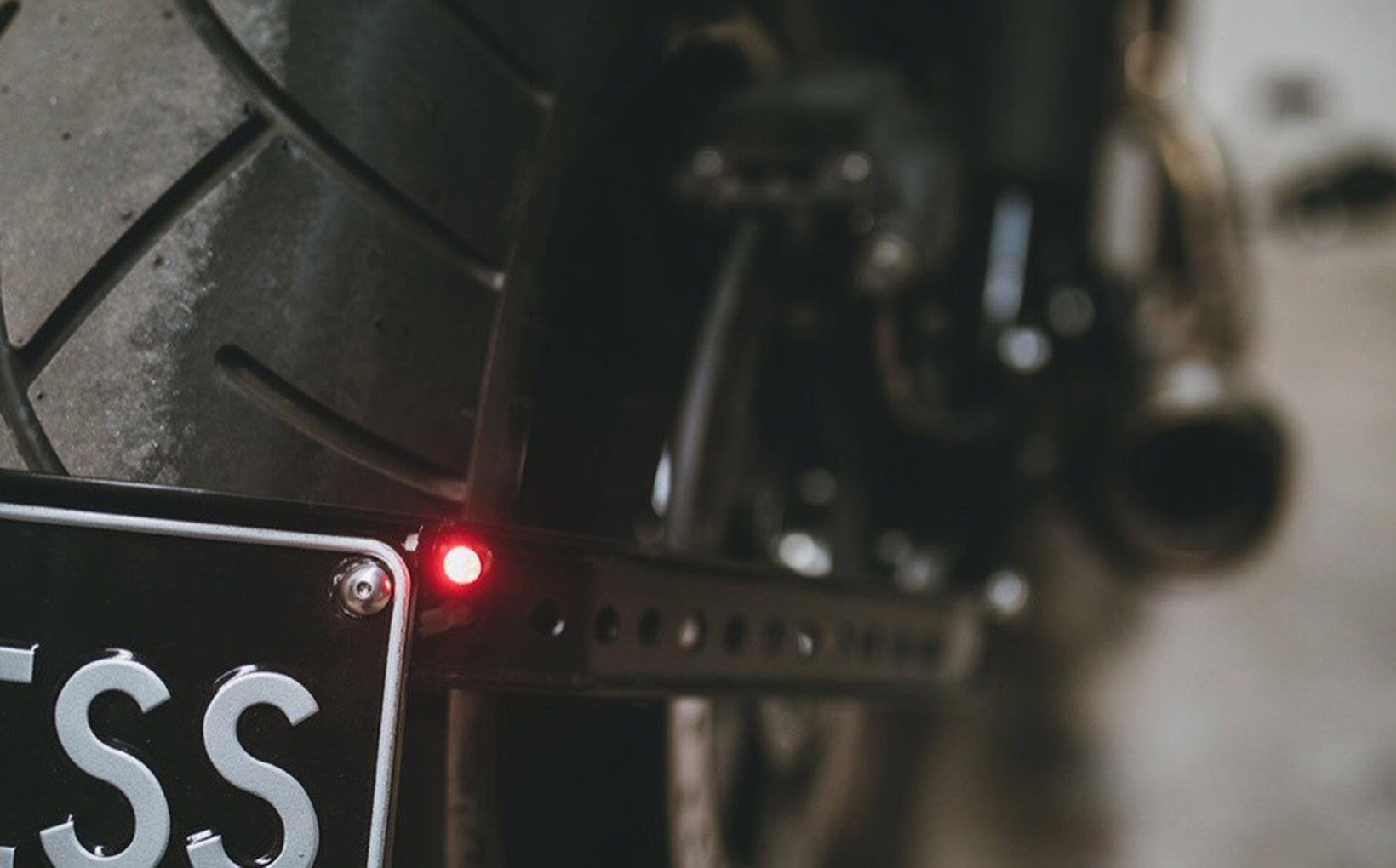 Black Bess down to the last detail.

He is a freelance who works in film and television as a safety officer or assistant director. Leanne is a Special Education teacher who has consulted with the South Australian government. 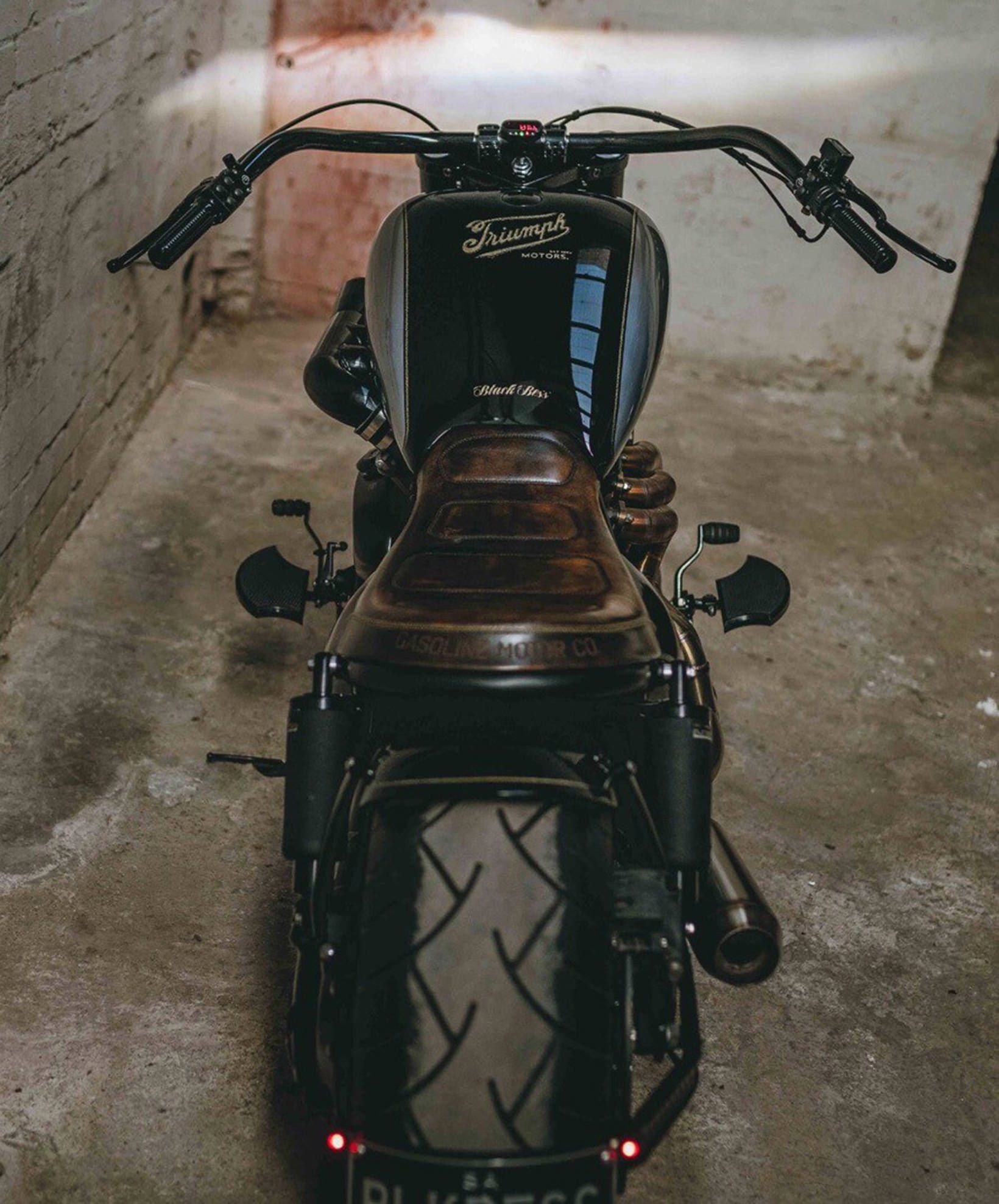 For all Black Bess’s beauty, the minimalist theme asserts itself.

Maris is also a registered supplier to the funeral industry and White Lady Funerals is among his clients. He has a black 2010 Rocket 3 roadster has been converted with a coffin sidecar. He developed a unique undercarriage to mount a sidecar – secured at four points.

The Caunes own a Camtrike (an Australian trike powered by a Holden Cruze four-cylinder engine), which has come in very handy while neither of them is able to ride a two-wheeled machine. But they may sell this in order to finance further work on the funeral bike – a fully integrated sidecar seat mounted on the existing deck, making it dual-purpose. 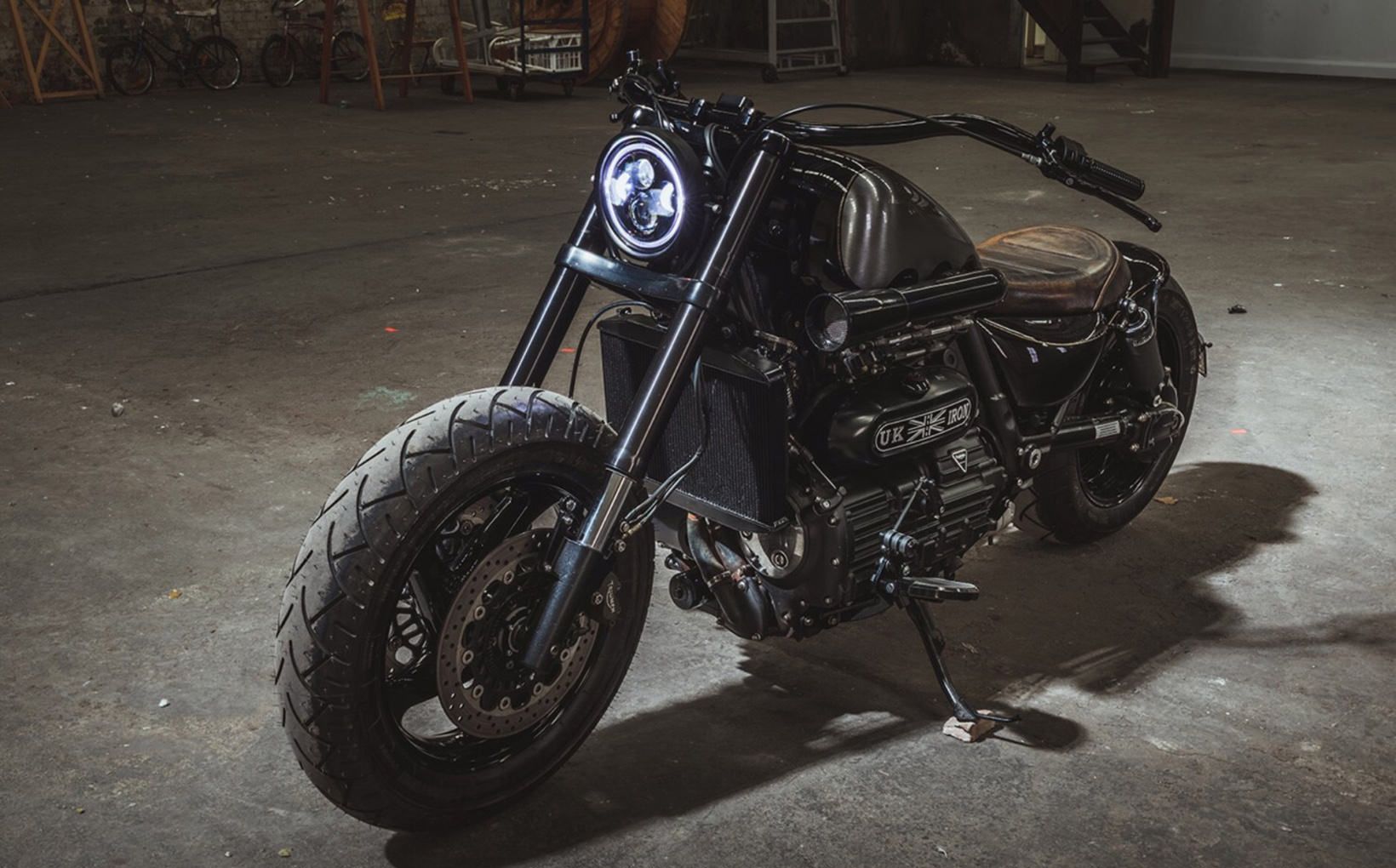 Black Bess is unique in Australia and probably the world. But there is such a strong creative drive in both Maris and Leanne Caune that it is easy to imagine them conjuring another magic motorcycle to keep Black Bess company!