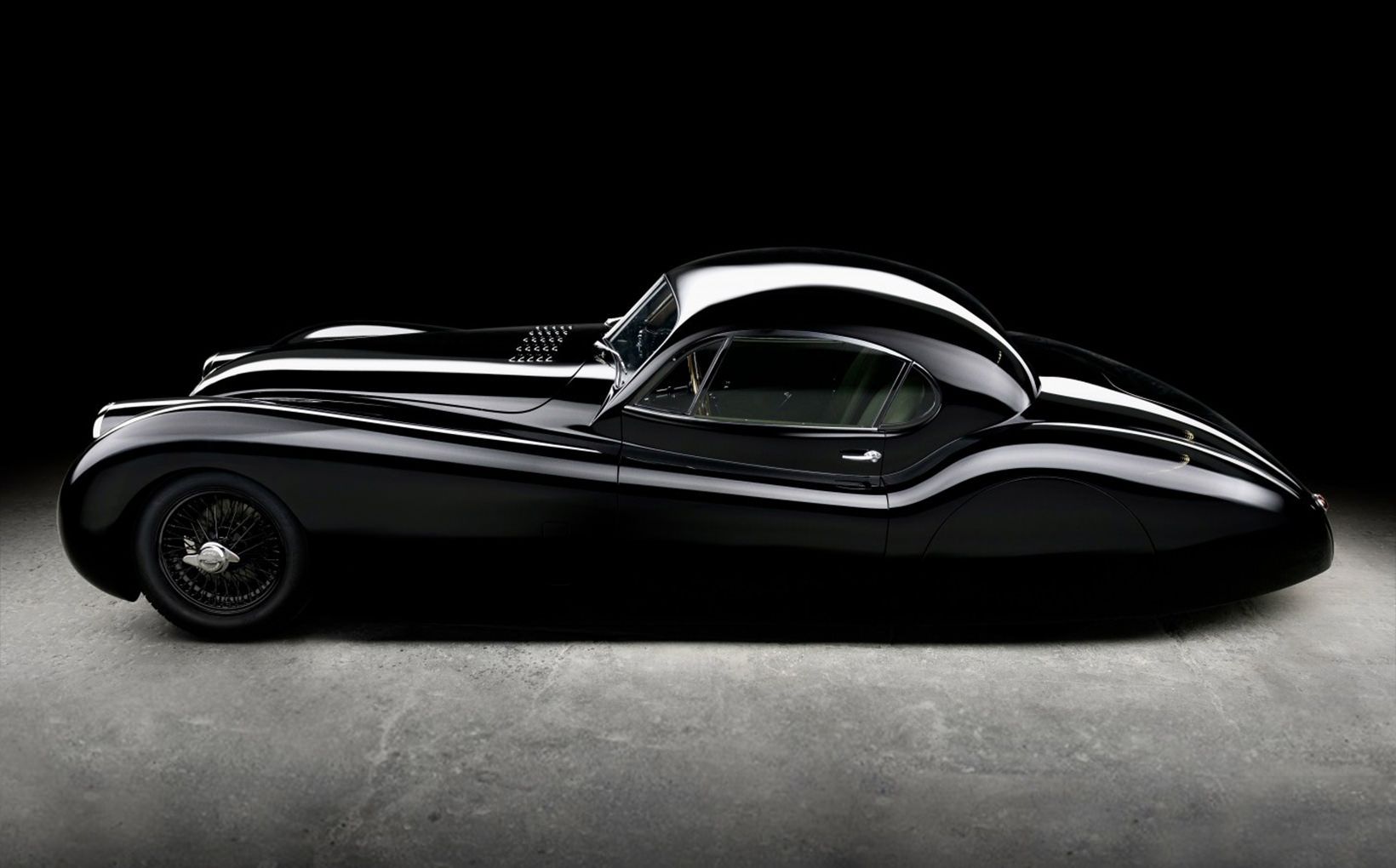 It takes passion, skill and a fair dose of courage to enhance a piece of automotive sculpture as classically beautiful as the Jaguar XK120. For most of us, those lines and proportions are so exquisite and iconic that trying to improve on them would be fanciful. Adding V12 power, even more so.

However, Shannons Club member and master car crafter Justin Hills is, obviously, not like most of us. He did have a serious crack at enhancing the XK120 and the finished result was so stunning it earned a written endorsement from eminent Jaguar designer Ian Callum.

It was also displayed at the company’s UK design studio to provide inspiration for future Jaguar designers. And it’s won numerous international car show awards, including no less than the Custom Coachwork award at California’s prestigious Pebble Beach concours (aka The Quail). 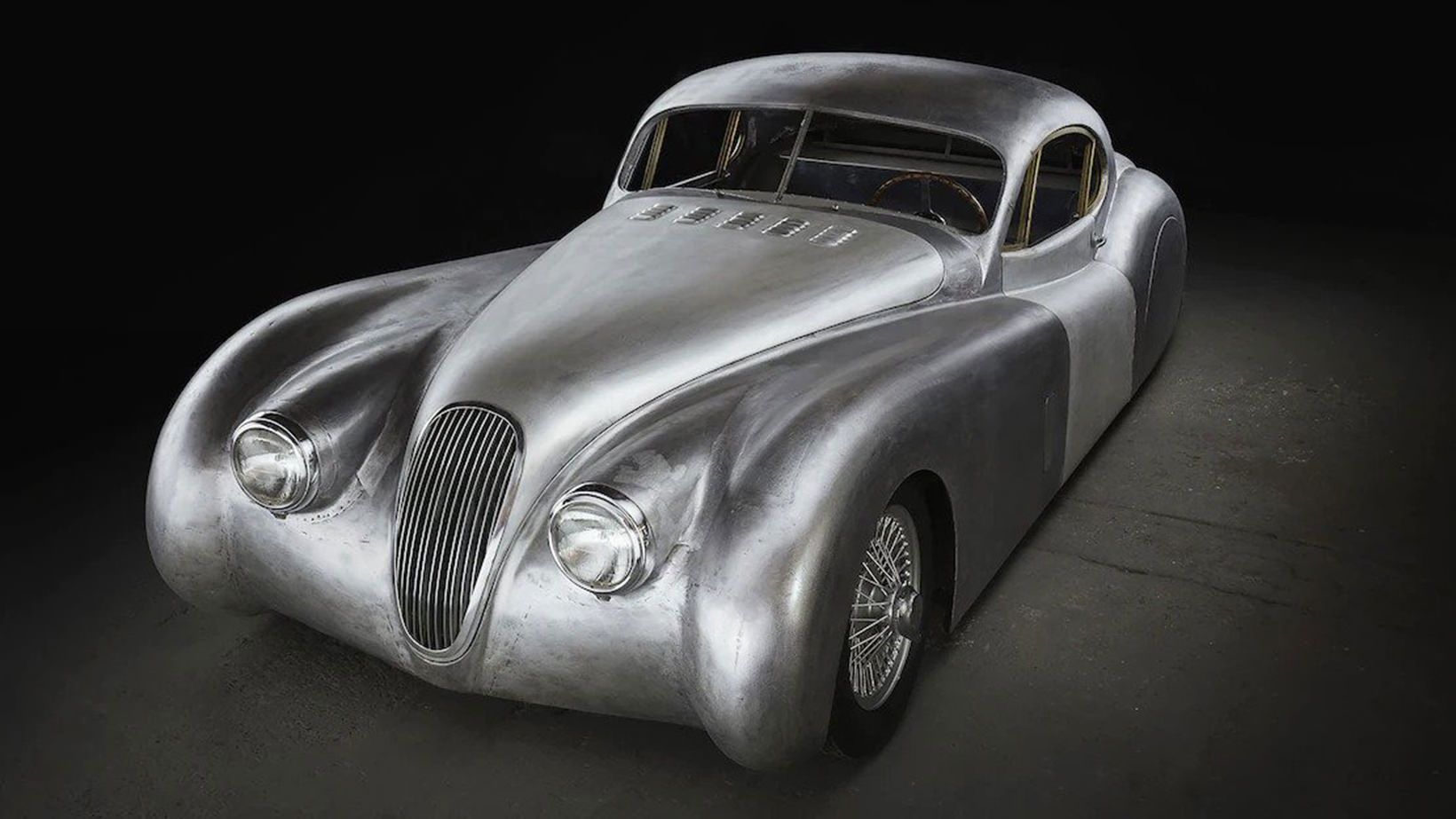 British-born Justin Hills is based at Taree on the NSW mid-north coast, specialising in custom car-building and restoring classic cars (Justin Hills Classic Auto Restoration). The peerless quality of his work speaks for itself. He’s also a Jaguar fanatic, so it’s perhaps not surprising that an artisan with such a formidable skills-set would tackle such an audacious project.

It had been in the planning for years before Justin found a suitable starting point in the USA. It was a 1953 fixed head coupe, left-hand drive if course, which had been delivered new to California and later modified for competition use.

Its original DOHC six-cylinder drivetrain was long gone and it was basically a rolling shell by the time Justin acquired it. That made it an ideal donor, given his plans for a project that would take him and his talented team five years to complete, consuming more than 2000 hours just on coachwork and paint alone. 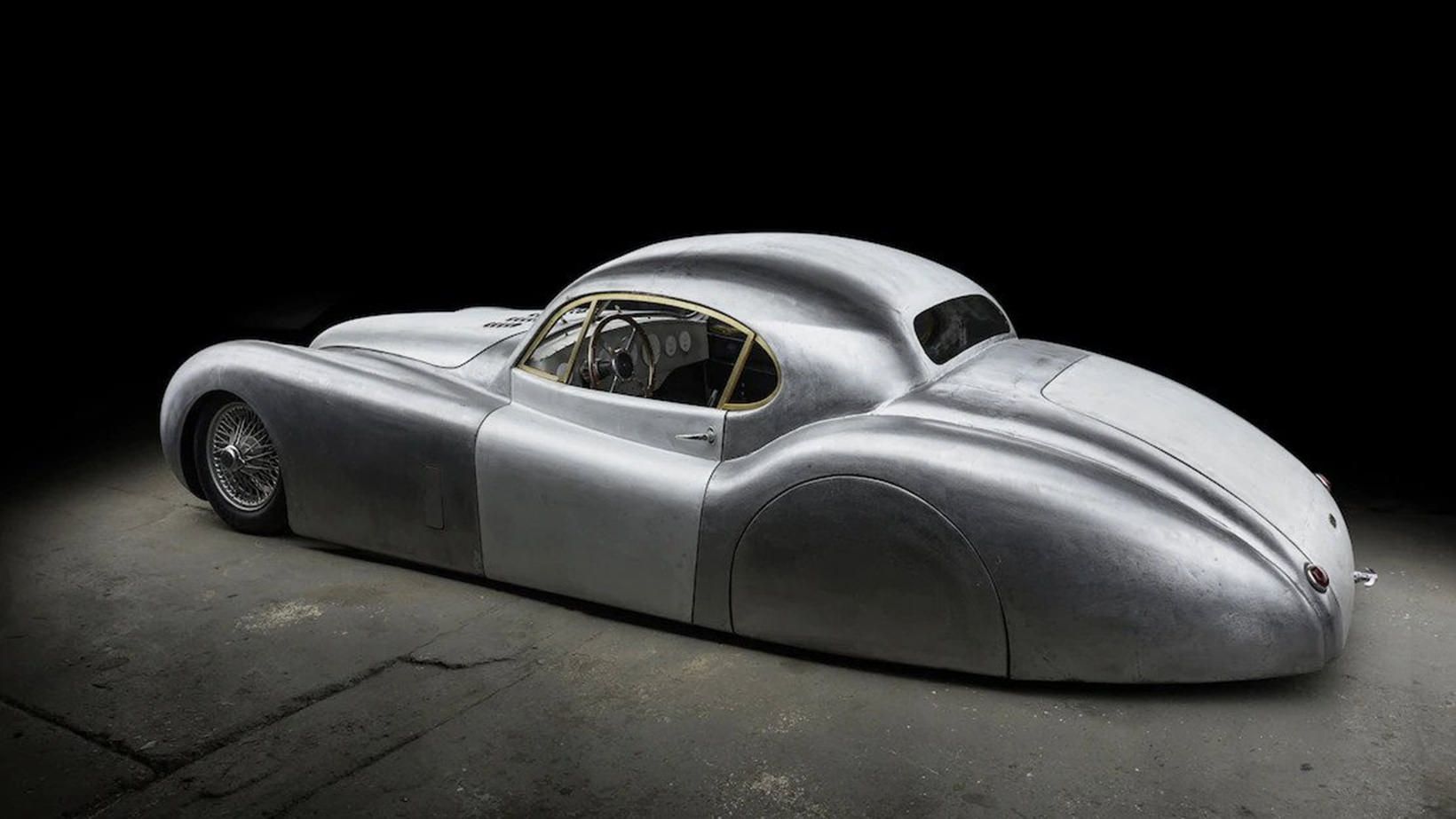 Justin drew inspiration from multiple themes. Primarily, he felt that styling enhancements could be made that were entirely respectful of the original design, yet free of the inevitable practicality and cost constraints inherent in the production version produced from 1948 to 1954.

He could also visualise how the XK120 fixed head coupe drew inspiration from the 1930s Art Deco era of industrial design, when exotic marques like Bugatti and Delahaye were revered for their elaborate hand-formed coachwork that flowed elegantly along low-slung chassis.

He was also enamoured by the streamlined shapes that emerged at Le Mans in the late 1930s, before the race went into a decade-long hiatus due to the war in Europe. Justin often thought what might have been possible if Jaguar had a V12 engine at the time and developed an XK120 coupe for Le Mans. Hence his self-named Le Mans Coupe. 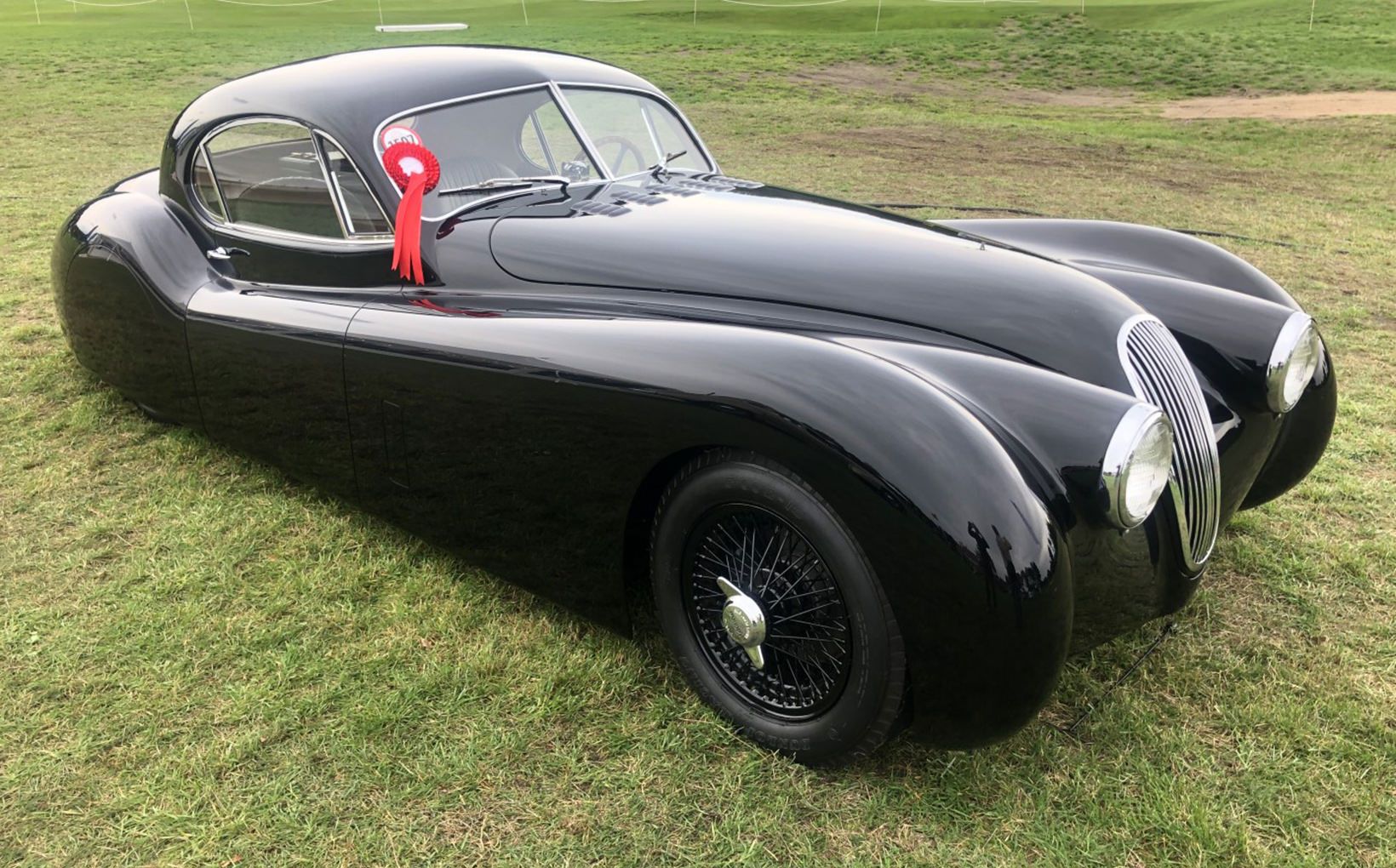 “The name was me being a bit tongue-in-cheek really, but it was inspired by that race. The Le Mans cars were low and aerodynamic and although this is what you might call a resto-mod I wanted to keep it in period; I wanted to make it look as if Jaguar could have done something similar back then.

The lowered roof line is most obvious, “but there are many smaller and more subtle changes elsewhere. If you don’t know Jaguars, you’re not going to notice them, which is the aim of the game. If people look at it and love it, even though they may not know what’s been changed, then I’ve achieved something really cool.”

Justin cut about three inches (75mm) out of the roof height to get the low, sleek look he wanted. And no doubt reduce aerodynamic drag on his imaginary Mulsanne Straight. However, this exacting surgery also required the roof panel to be lengthened by cutting across its width and adding a filler piece, to maintain the desired distance between the rear of the roof and the leading edge of the boot-lid. 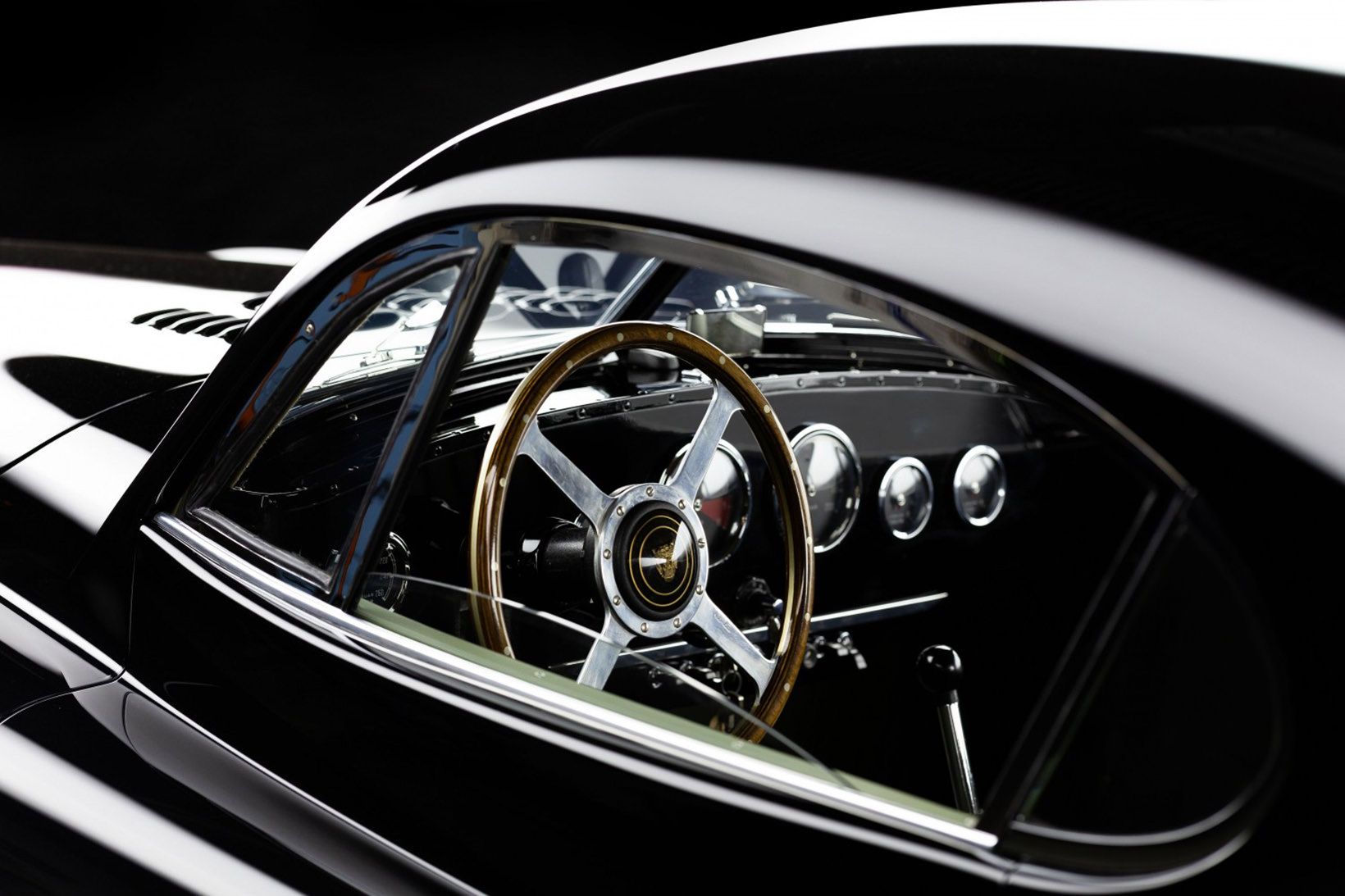 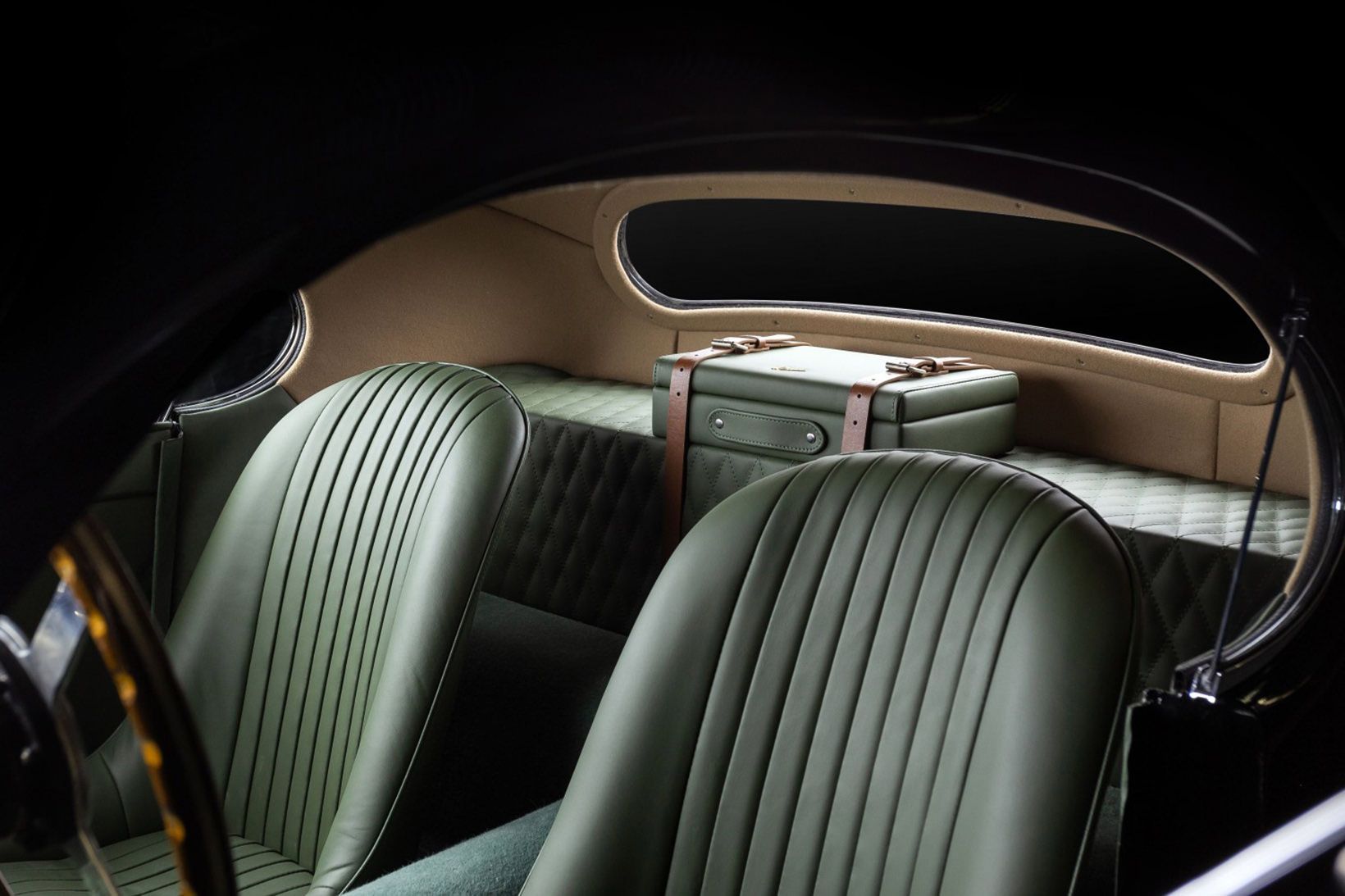 The doors, boot-lid and fluted bonnet are all crafted from aluminium, to reduce weight in true racing tradition. There are no bumper bars. The front guards and nose have been cut and reformed. The skirted rear guards are welded to the body, with traditional lead-wiping creating seamless joins.

The way the lower lip of the bonnet curves neatly around the base of the grille and blends into the reshaped nose is another of many changes your eyes must go searching for - and don’t think you’re alone if you can’t see them.

Many observers think it’s longer and wider, but that’s also a masterful illusion. Although it’s so low it appears to be melting into the ground, the Le Mans Coupe maintains the standard width and is only 12mm longer. Four coats of black topped with five coats of clear highlight every confounding curve. 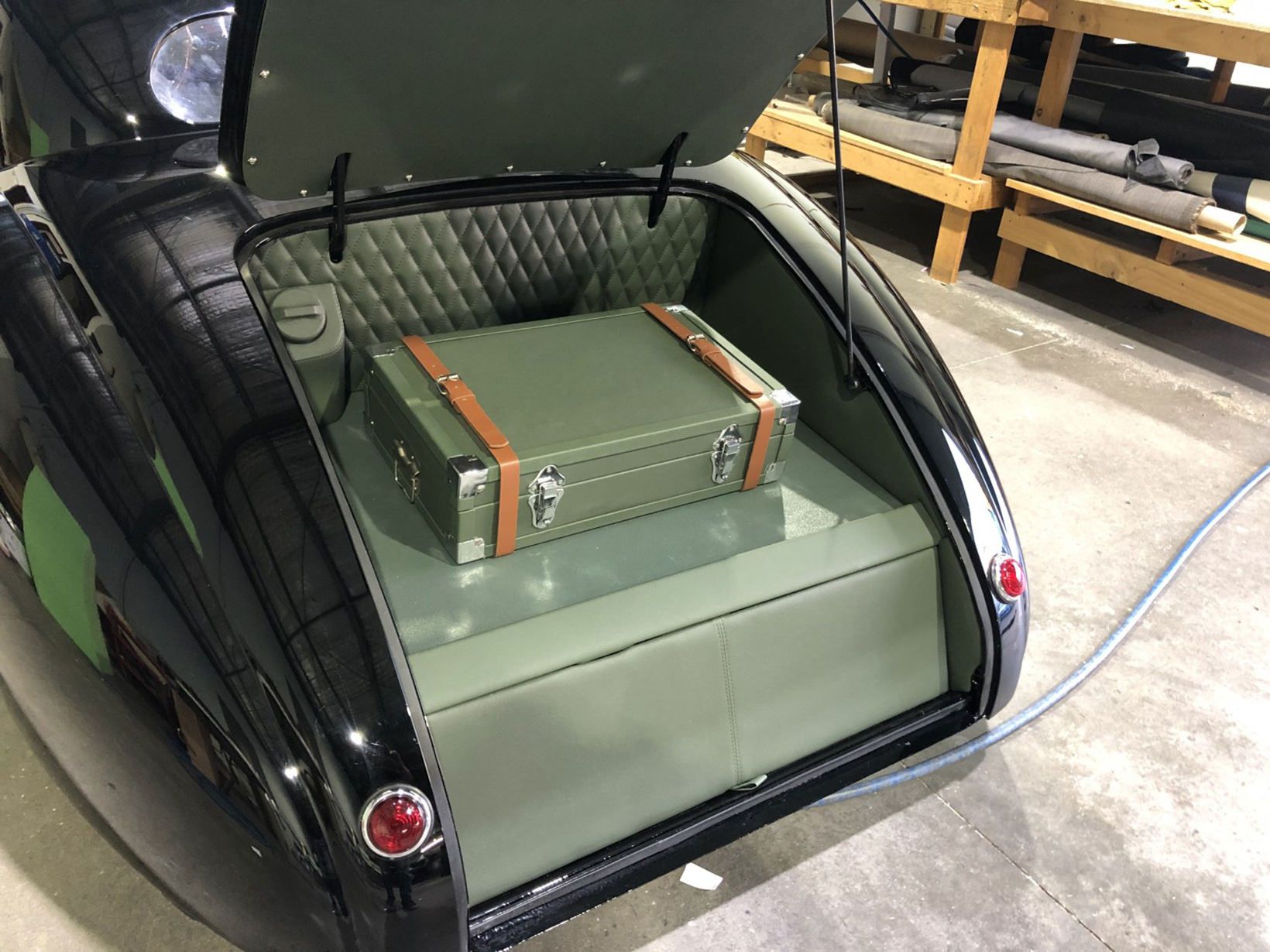 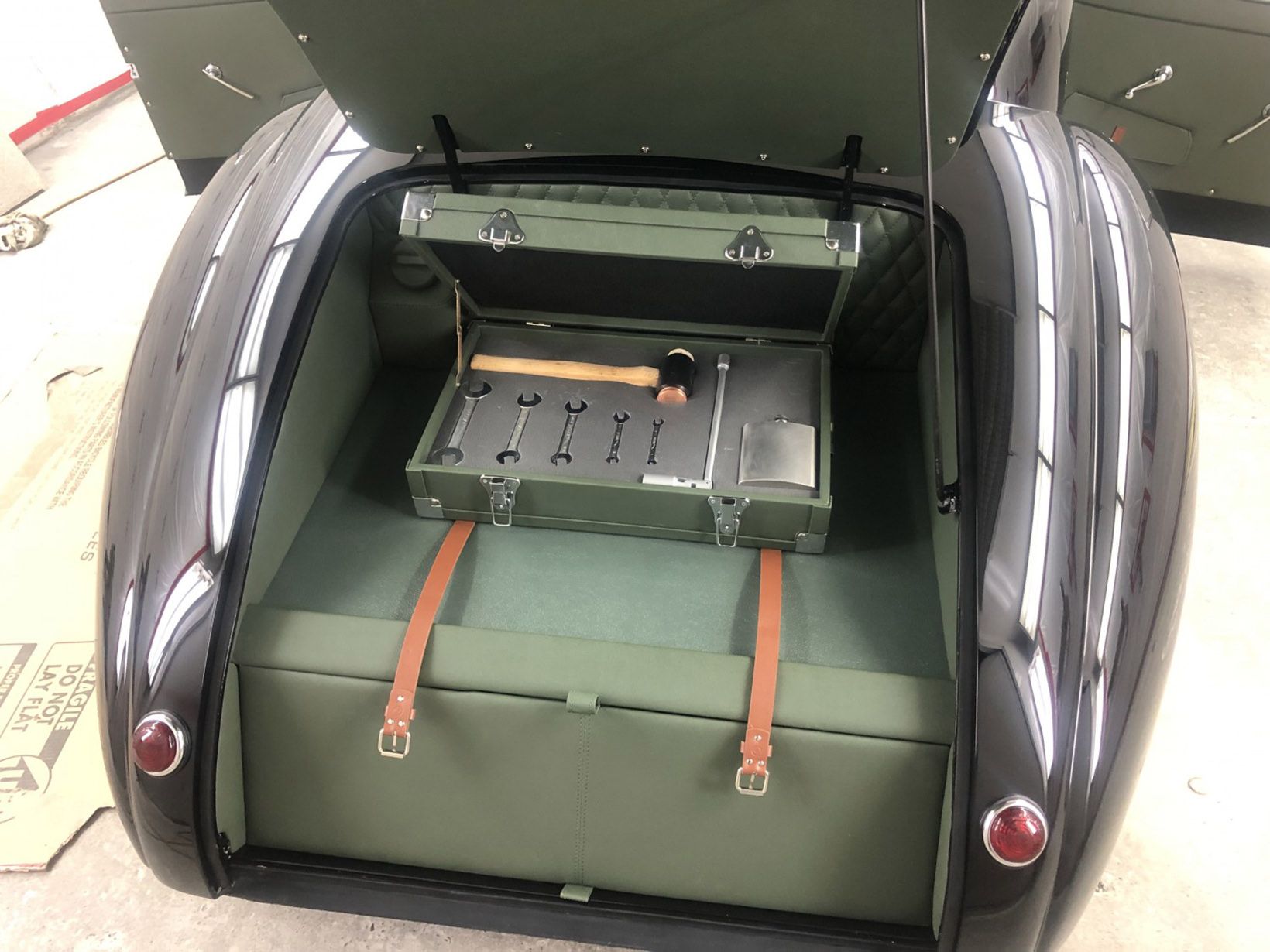 The boot with bespoke tool kit is a masterclass in attention to detail.

The interior, designed by Justin and stitched to perfection by Trik Trim, features pure wool carpet like the original and the classic racing-style bucket seats and bespoke luggage are finished in a period-perfect shade of sumptuous Connolly leather. The boot lining, with bespoke tool kit, continues the interior theme. Justin also created his own dashboard from scratch (he kept it LHD in respecting its USA heritage) using a Mota-Lita steering wheel, exposed rivet heads and custom-made digital instruments that cleverly have the look and feel of old Jaguar gauges.

Under that long bonnet sits a majestic V12 sourced from a 1980s XJ-S coupe. Twelve exposed inlet trumpets are part of Justin’s hand-made fuel-injection system and the engine’s been slightly de-stroked from its original 5.3 to just over 5.0 litres in displacement, using made-to-order rods and pistons.

A smaller diameter flywheel with twin-plate clutch further reduce the rotating masses, which combined with the shorter stroke and lighter rods and pistons create the sharp throttle response and free-revving character Justin craved. Although it produces more than 400bhp (300kW) he insists that chasing optimum power wasn’t the priority. 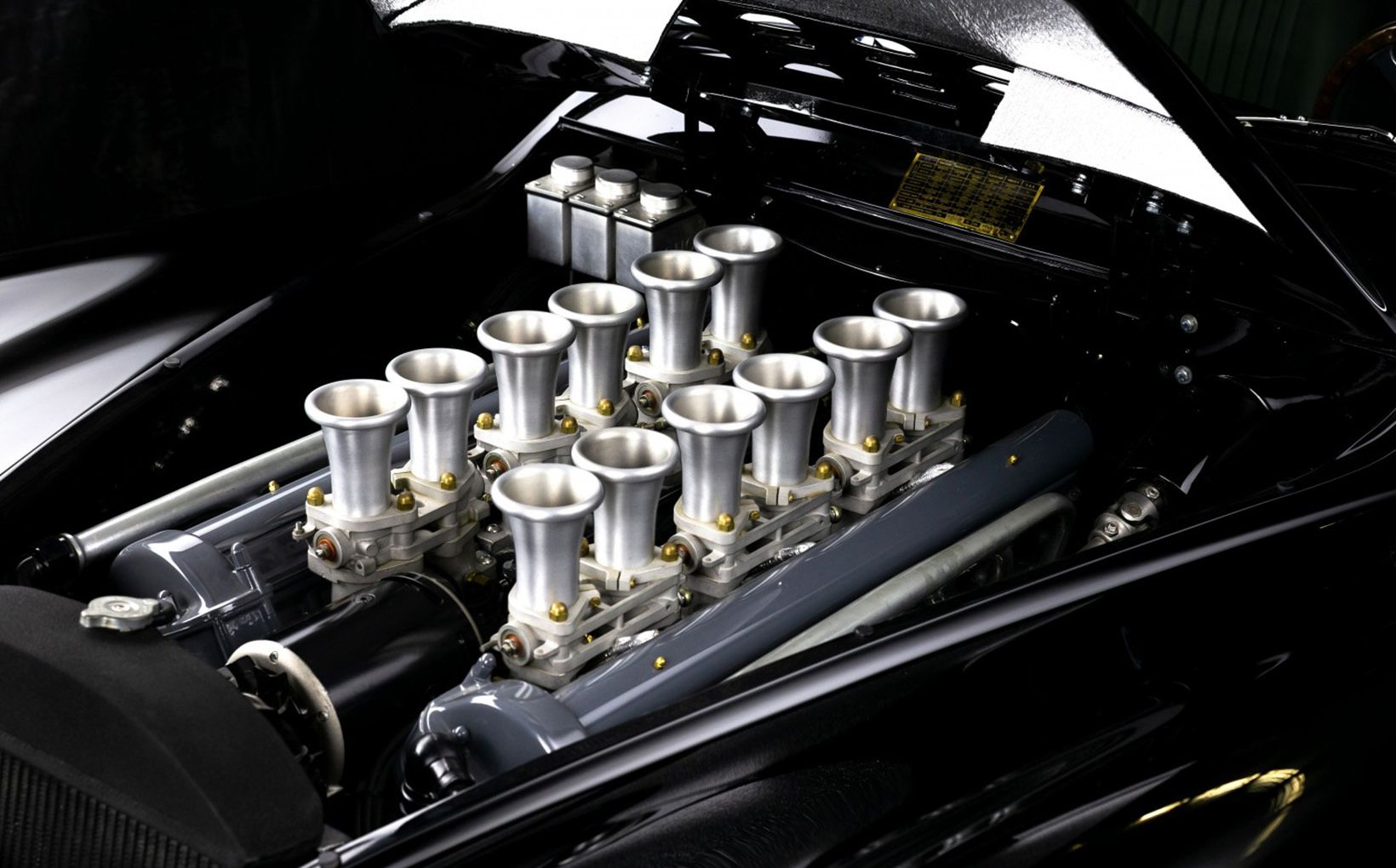 Jaguar V12 is a sight to behold – and has a sound to revere! Fuel-injection, cooling and exhaust systems were all custom-made and work superbly.

“What I most wanted was the high revs and sound of a Le Mans car of that era,” he says proudly. “It really revs now. We put big cams in it from an old race boat. On the dyno we took it up to 8600rpm and it’s supposed to be safe to 9000rpm, but I’ve never dared to take it that far!”

Gearbox is a robust R154 five-speeder adapted from a Toyota Supra Turbo, with tougher internals. It’s also fitted with a short-throw shift kit which, along with a competition-style pedal box and floor-pivoting pedals, enhances the retro racing feel.

It still rides on its original steel chassis frame, now equipped with a multi-link live rear axle sourced from an XK150 with stronger 31-spline axles and Tru-Trac LSD. There’s also uprated XK150 front suspension and a quartet of large disc brakes, inside elegant 15-inch Jaguar wires with authentic centre-lock hubs. Rim and tyre widths are relatively narrow in keeping with the period. 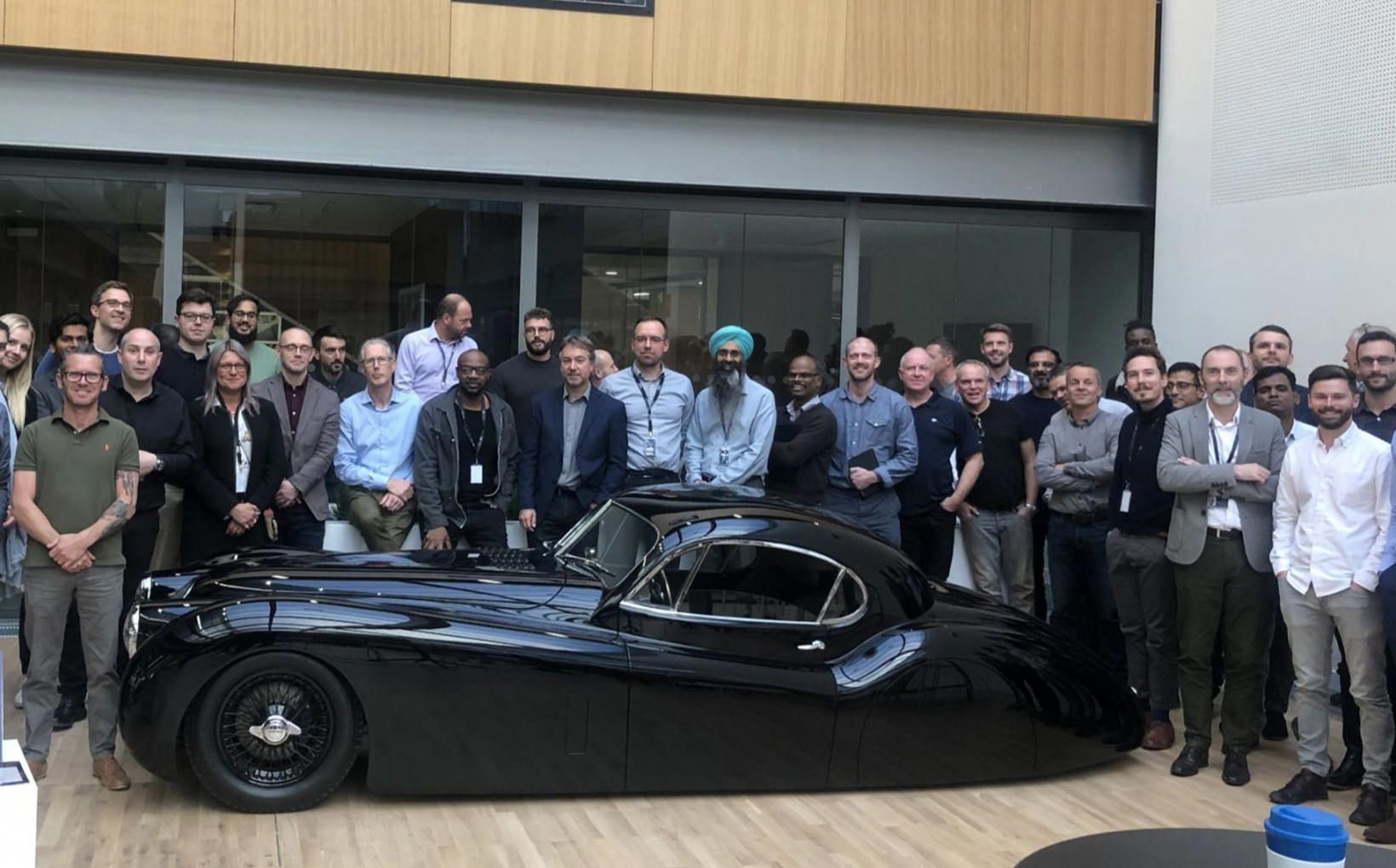 Justin (at front of car) with Jaguar staff during the Le Mans Coupe’s UK tour.

There’s also an air-adjustable spring/shock absorber unit in each corner which allows the coupe to be lowered to a belly-scraping ride height for static display purposes, or raised by up to four inches (100mm) when it needs to be driven.

It’s very responsive to drive,” Justin reveals. “The steering is very direct and it has strong acceleration and braking. Given that the build of this car was primarily a styling exercise for me, I was amazed to discover how nice it was behind the wheel.

“I drove it on some Belgian roads after the Zoute Grand Prix (car show). I had to drive it for several kilometres through a township, which involved going through numerous busy roundabouts ‘the wrong way’ (LHD) when it was pissing down with rain. I must admit, that was a bit stressful!” 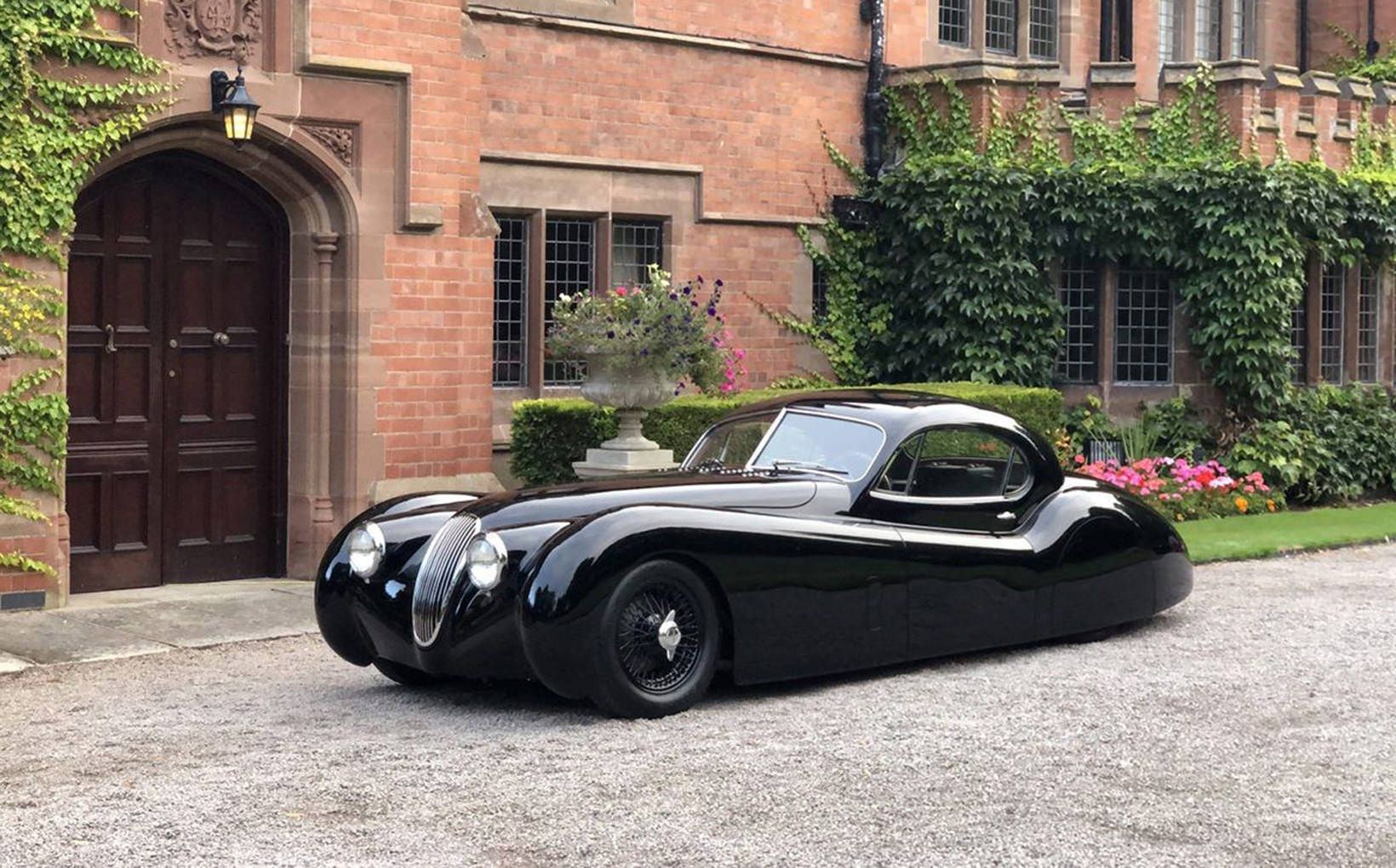 The former home of Sir William Lyons was a special setting for a unique Jaguar.

Although Justin sold the car to a passionate Melbourne collector soon after its completion, he will always cherish memories of its international tour, which included staying several nights as guests at Wappenbury Hall, the former home of Jaguar founder Sir William Lyons. Many Jaguars have been photographed at this famous estate, so Justin was happy to add his Le Mans Coupe to the list.

“Winning the Custom Coachwork award (at Pebble Beach) was also quite a celebration, because I was joined there by the previous owner and its current owner. I’m also pleased that it’s staying in Australia, because I thought it would have ended up overseas.” Proof that, contrary to folklore, black cats can also bring good luck.