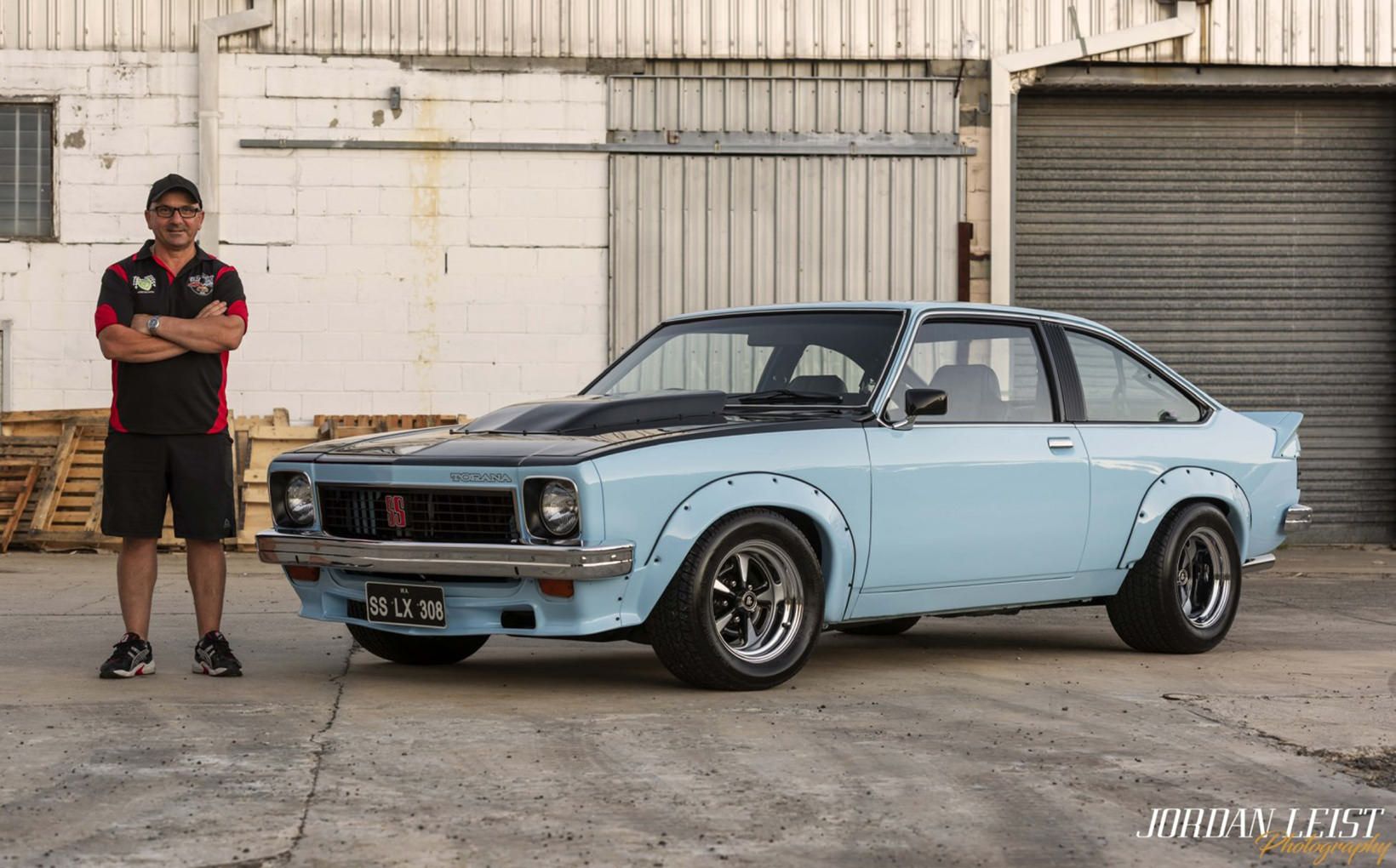 It is perhaps the most triumphant image in Australian motorsport: Peter Brock coasting to victory – arm on the window sill of his A9X Torana – two-wheeling through the Dipper on the final record-breaking lap of the 1979 Bathurst 1000. Channel 7 broadcaster Mike Raymond was almost apopleptic with excitement as he predicted that this would be a record lap. ‘Brock First, Daylight Second’ was the late great Bill Tuckey’s heading for the 1979 chapter of his classic history, Australia’s Greatest Motor Race, 1960-1989. Just how many young (and not-so-young enthusiasts) were initiated into a lifelong love of A9X Torana hatchbacks from this moment cannot be calculated, but the joyous owner of this beautiful blue car counts himself among them. 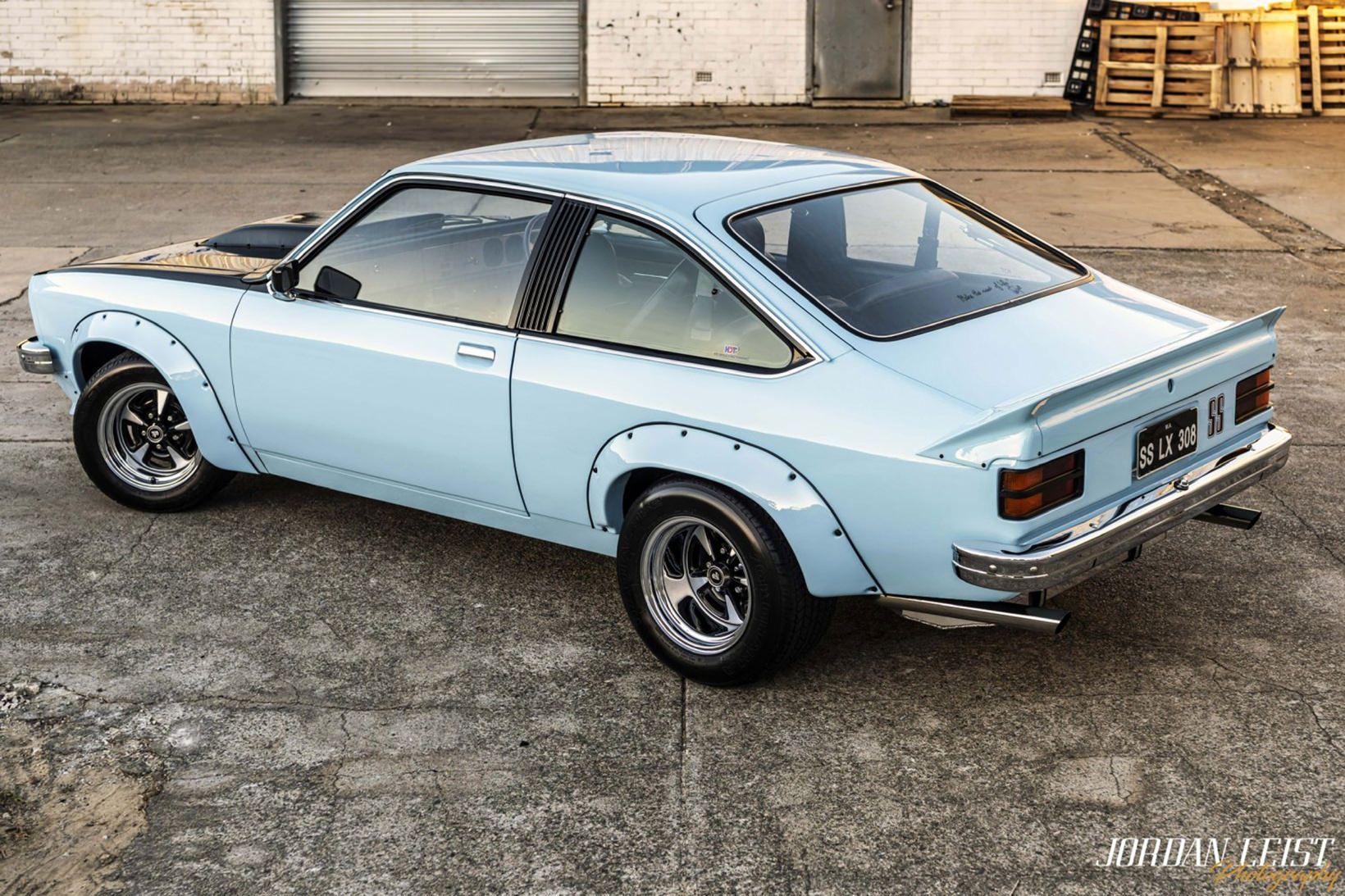 “I was 14,” says Angelo Roberto, “when I watched that 1979 race. And don’t forget Brock won by six and a half laps!” Of course, Brock had also been victorious the previous year in a similar car! So, young Angelo was embarked on his love affair with Holdens and now owns three of his favourites. There’s no disputing that number one spot goes to the Torana A9X Tribute you see here, worthy winner – from more than 1200 entries – of the 2021 Shannons Club Show & Shine. Number two is his 1975 HJ Monaro GTS coupe, and he has plenty of affection for the 2005 Devil Yellow 6-speed VZ Monaro CV8-Z which rounds out his trifecta of Holden.

Angelo is happy to call himself a Holden man. Does he covet any Fords? Not really, he says, “although I quite like the XB Hardtop, which would be my favourite Ford.” 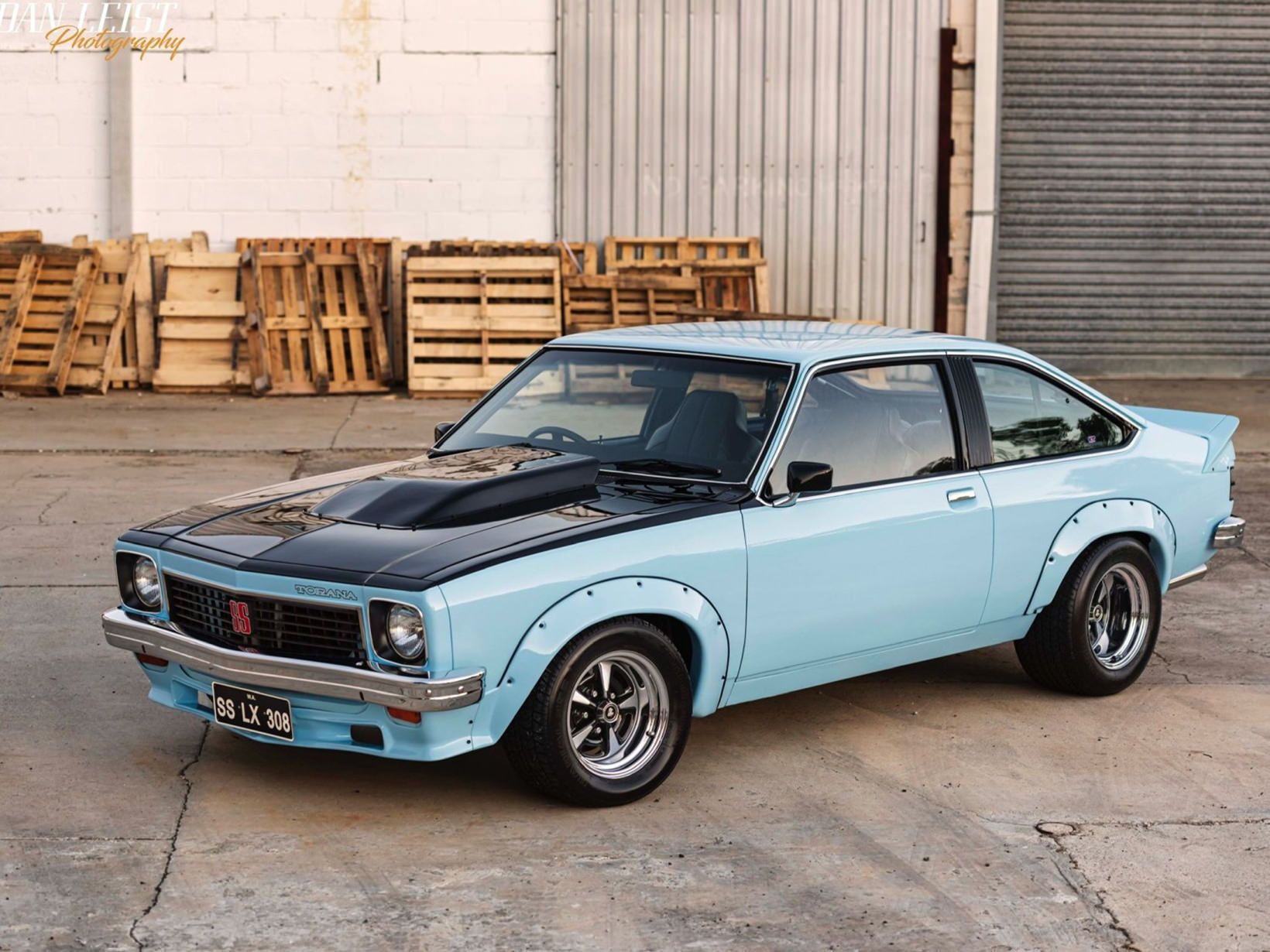 The contrast between blue and black, chrome and the red SS badge highlights the visual balance of the shape.

Now 56, Angelo has owned the Torana coming up 13 years. Even the tale of how he acquired it is interesting. Emerging from the factory in April 1976 as a six-cylinder SS, the car lived its early years in Melbourne where it was restored, says Angelo, in about 2003.

Most significantly, the 3.3-litre six-cylinder engine was replaced by a 308 stroked to 336 cubic inches. And a 9-inch diff was installed.

Then the car went to Adelaide and it was from the South Australian capital that a mate of Angelo’s purchased it and brought across to Fremantle. “But he wasn’t really into hatchbacks,” says Angelo, “and one day after just two weeks of owning the car he rang and asked if I’d like to buy it.” 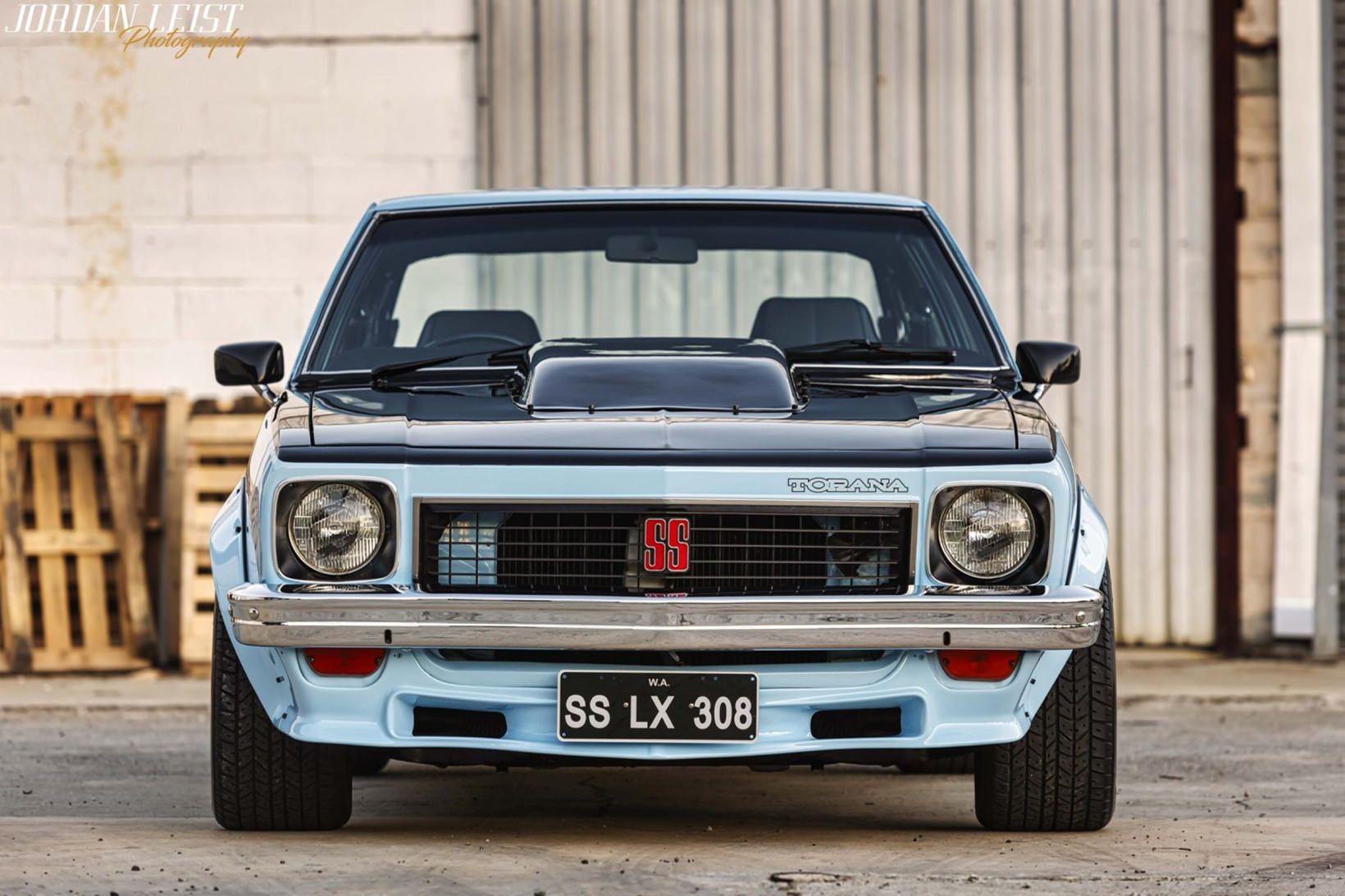 Low, mean, wide-wheeled, this Torana evokes memories of Brock at Mount Panorama for the 1979 Bathurst 1000.

Although the Torana had essentially been rebuilt in Melbourne, Angelo felt the need to make several major improvements with the work being done over a period of several years as he accumulated the necessary funds. He had virtually the entire driveline rebuilt. The 9-inch was 32mm out of centre. “The mechanic said it would be simpler just to buy a new one and while I wasn’t all that keen I saw that it was probably the best solution.” The work was done by Final Drive in O’Connor, Perth.

Out came the Supra 5-speed gearbox and a reconditioned M21 ‘Aussie’ 4-speed was dropped into place, having been beefed up with a stronger layshaft. All new bushes were fitted to the steering rack, and the rest of the front end was updated with new ball joints and bushes. 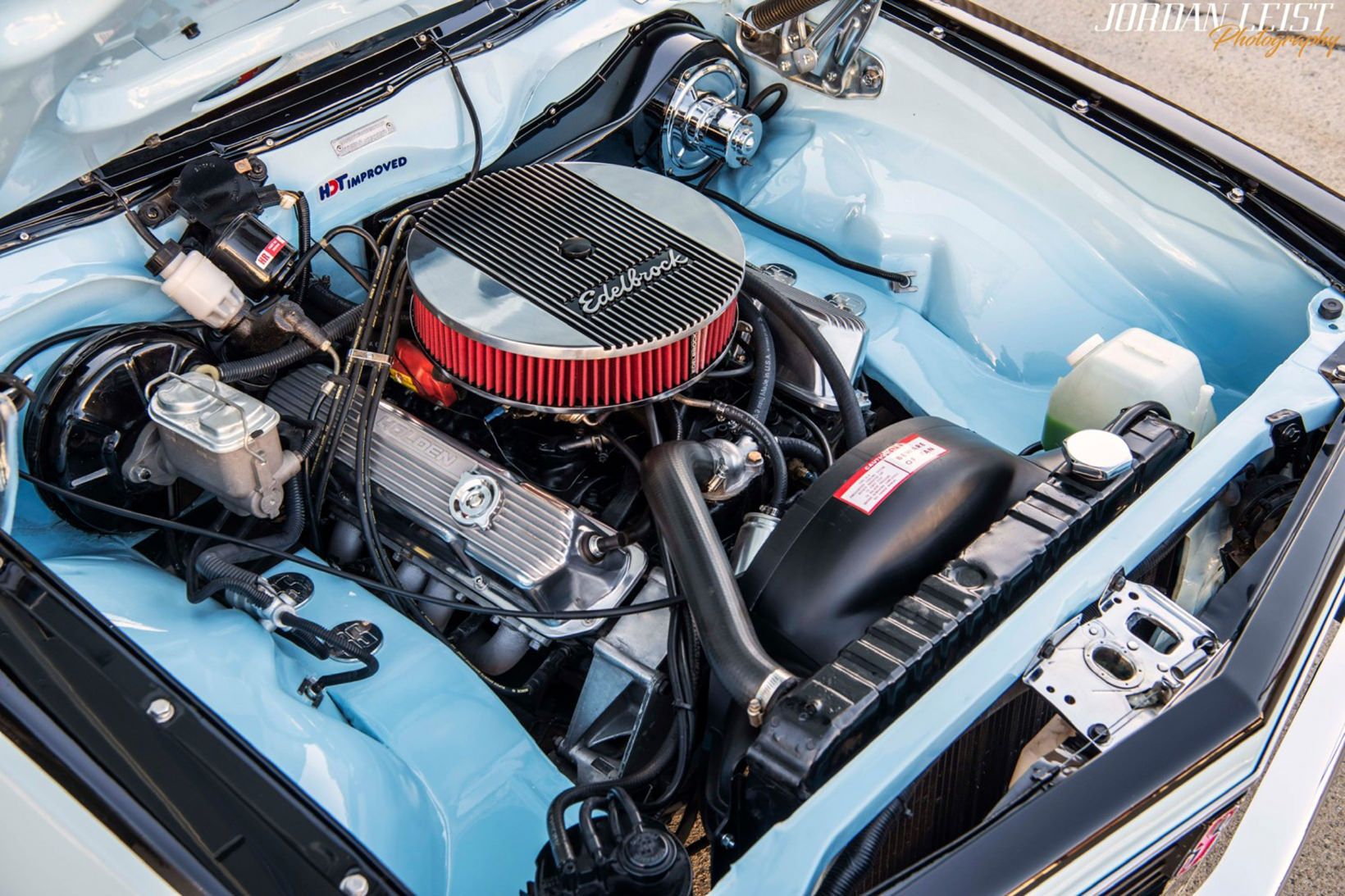 Angelo replaced the Holley carburettor – he’s no fan – with a blueprinted edition of the original 4-barrel Rochester and says the car is much smoother, more tractable and runs leaner than before. It’s beautiful to drive, he says, with no flat spots or bogging down coming out of slower corners (as it did with the Holley). He notes that the unassisted rack and pinion steering is not too heavy.

Angelo added polished alloy valve covers and an Edelbrock air-cleaner to finish off the engine bay “to my satisfaction”. 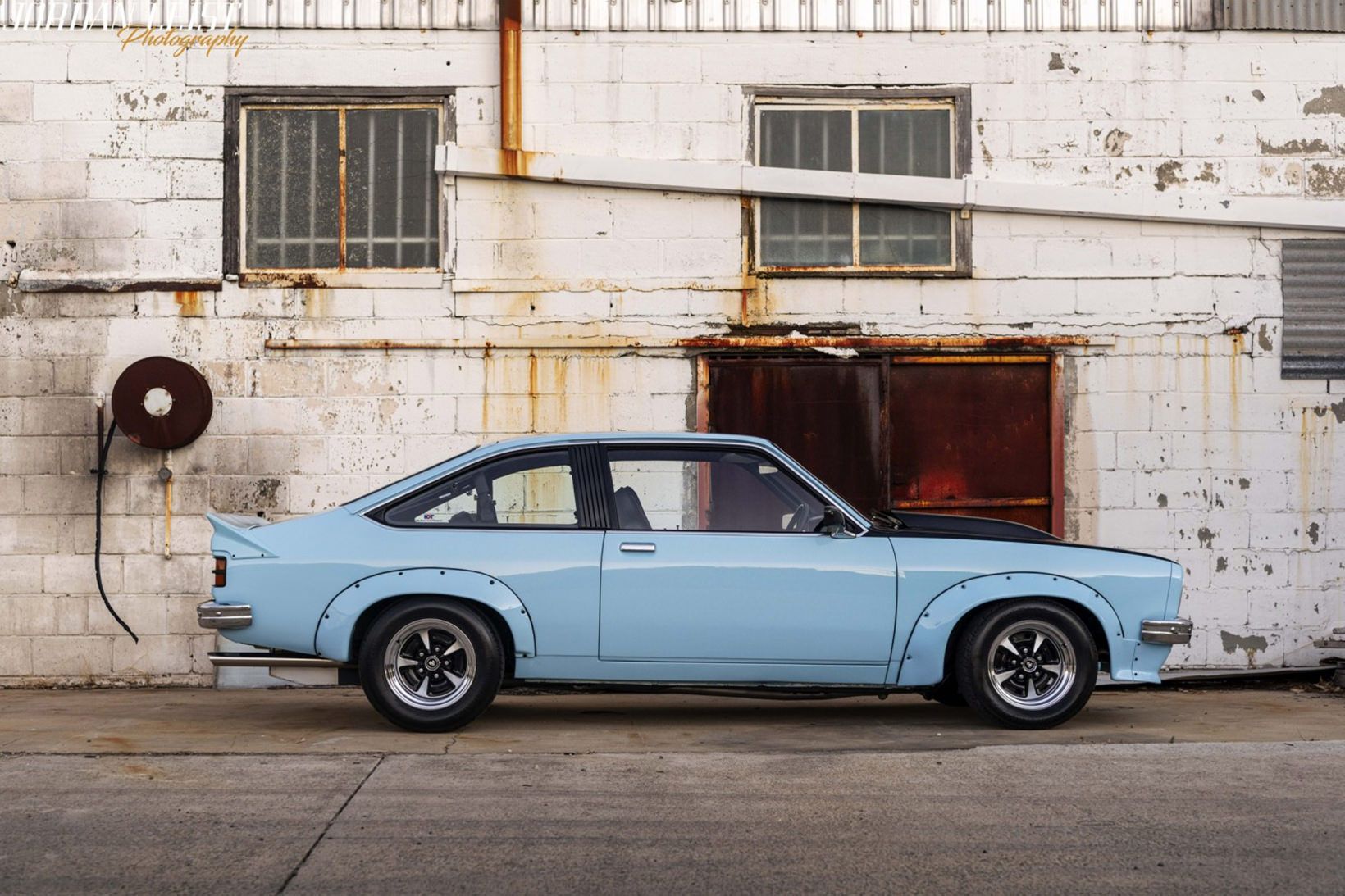 Profile shot reveals importance of the flares to the overall demeanour of this car.

Then there was the exterior. Angelo was happy with the paintwork but says the panel gaps were inconsistent and that the bonnet scoop was “pretty average with ripples in it”. So he bought a new one and had the entire bonnet repainted in the correct blue and black. He also swapped the painted bumpers for chrome, in a move that puts Angelo’s own stamp on how an A9X Tribute should look: the move away from chrome was just beginning when the LX was new and all A9Xs had chromed bumpers (not painted as on the race cars). 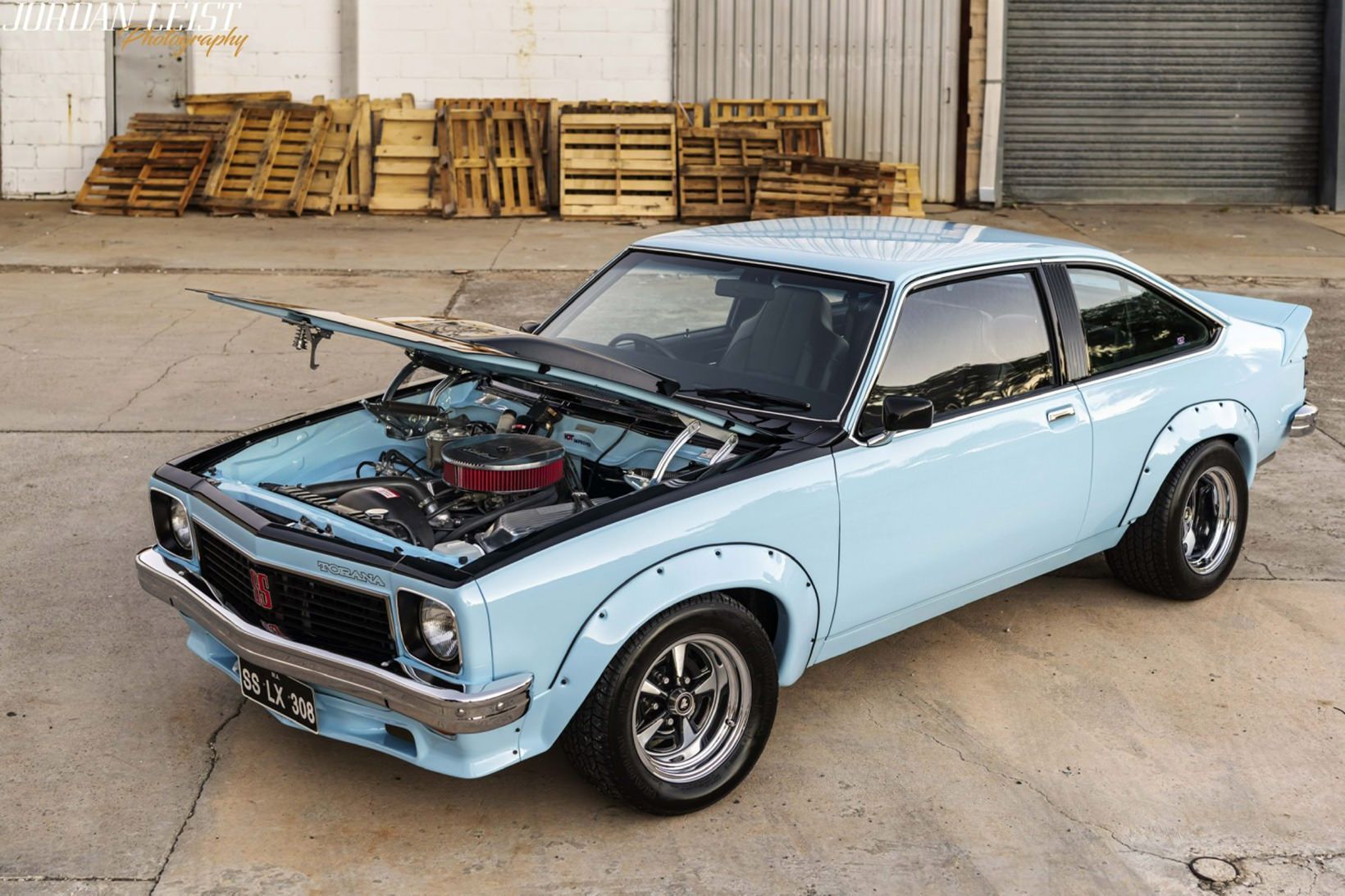 Anywhere you look the details are superb!

His panel beater Rowe and Sons fixed all the gaps and refitted the front flares and spoiler.

This fetching colour – Opaline Blue – was not popular when LX Toranas were current, but it suits the car superbly and is certainly on the rare side: to the best of Angelo’s knowledge just one A9X hatch and one sedan came in this livery. “When it’s parked in a show,” he says, “the Opaline Blue really stands out and draws people to the car.” Angelo says that Holden offered no fewer than 32 colours choices, “which is pretty impressive when you think that today you only get a few.” (Incidentally, one of his friends owns one of only three Valencia Orange A9X hatches produced, has had it for 33 years, and is in the process of selling it.) 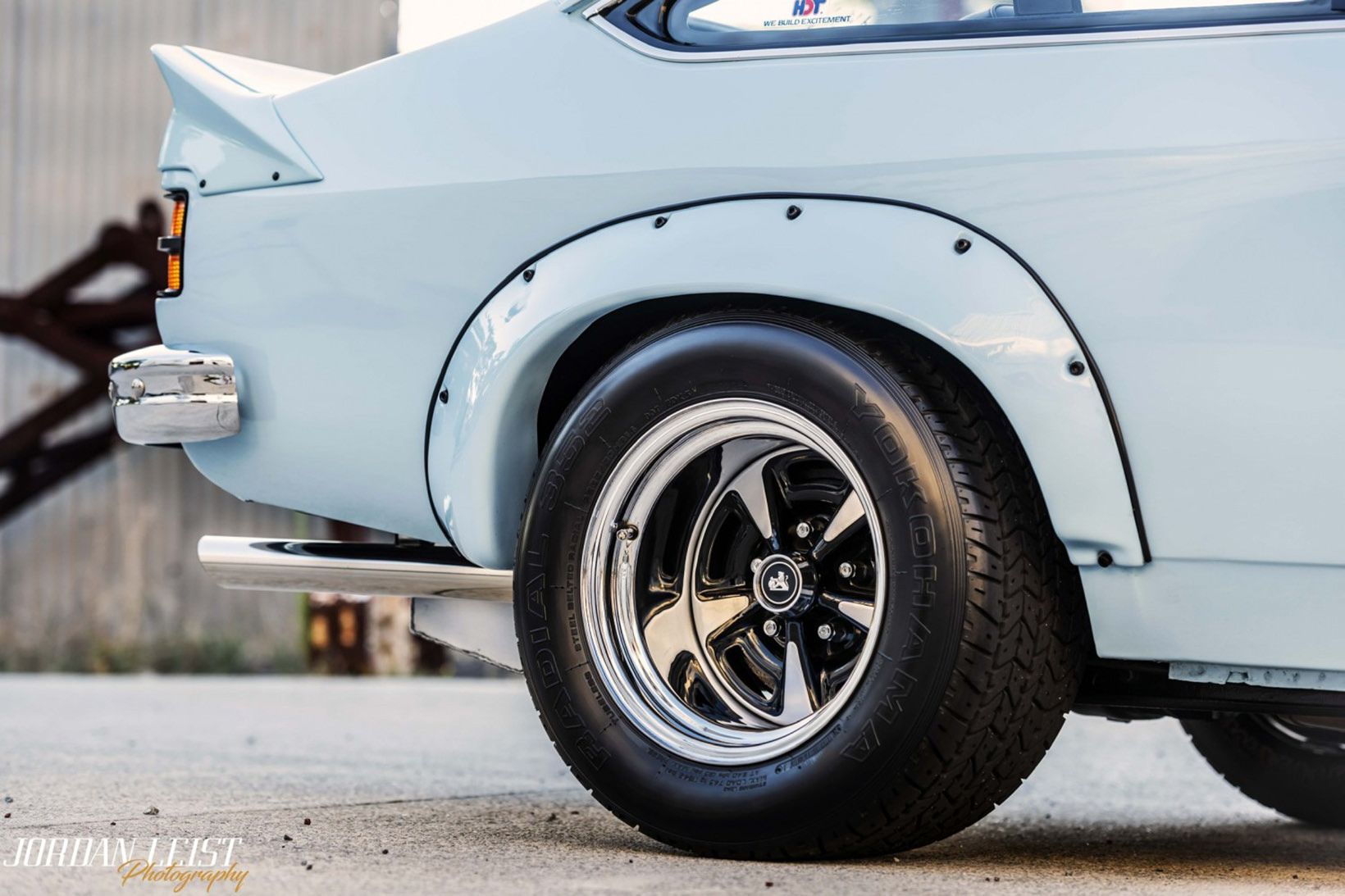 Angelo wanted his Tribute to be equipped with the trademark A9X rear spoiler and was also keen to fit a set of wheels that would do justice to those majestic flared guards. The A9X was equipped with Holden GTS-style black and grey steel rims. In the day, 7-inch rims were standard (and considered wide). But Angelo has gone for the same style of wheel, albeit chromed and widened to eight inches for the front and 10 for the rear, shod with Yokohama 352 245/50/14 and 265/50/14 tyres respectively. They suit the Torana shape perfectly, giving the hatch a really planted stance. 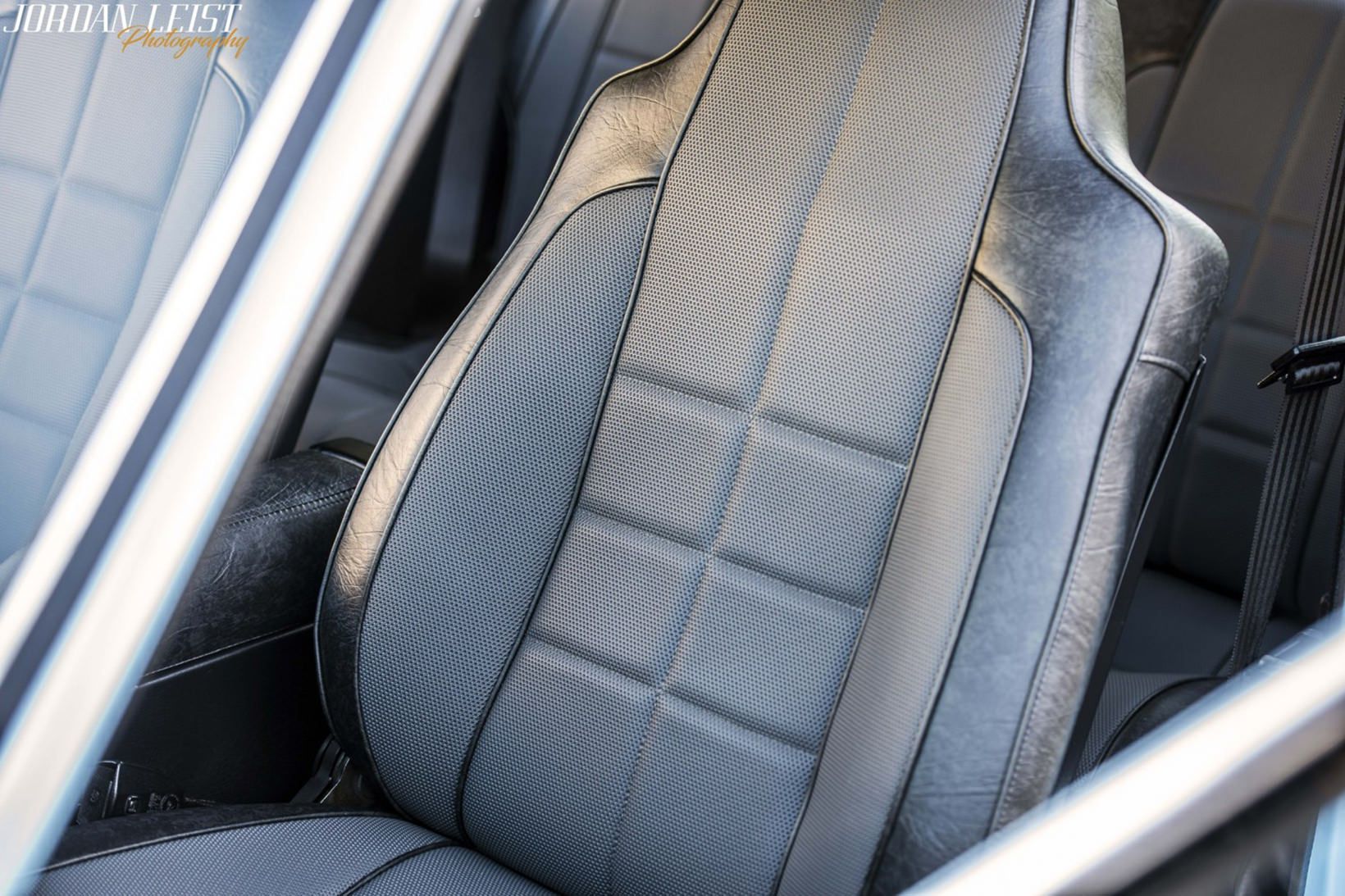 He particularly objected to the far-from-standard velour interior and went to some lengths to obtain the original ‘golf ball’ Slate 18V trim (per the compliance plate and named for the pattern of the grey central section of the seats; 19V signifies plain black vinyl without the perforated grey vinyl inserts). The interior upgrade was handled by Tim Trimmers. All the work was done at Angelo’s place because, he says, the trimmer didn’t like having to store valuable cars. Only the seats were taken away to be re-upholstered.

The 120-litre polished alloy drop tank was another important addition. Now, Angelo says, “it’s pretty well how I want it”. The ‘golf ball’ Slate interior contrasts well with the Opaline Blue paintwork, as do the wider GTS wheels and alloy drop tank. Simply, this is a stunning Torana A9X Tribute, an absolute beauty meticulously presented. 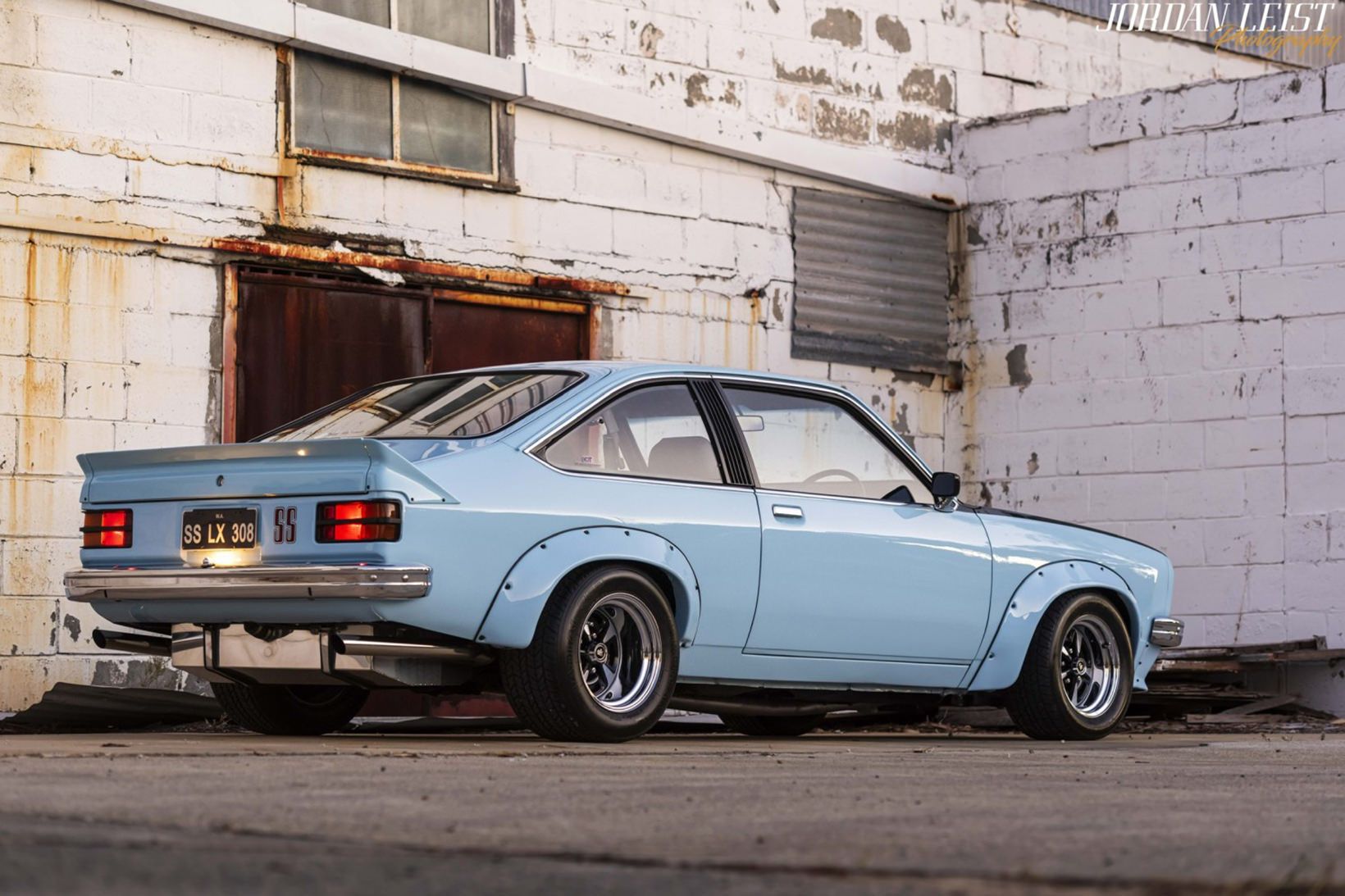 And, of course, you gotta have the alloy drop tank!

Angelo belongs to the Combined Torana Club and takes his car out once or twice a month on club runs. He has turned down generous offers and has no plans to part with it.