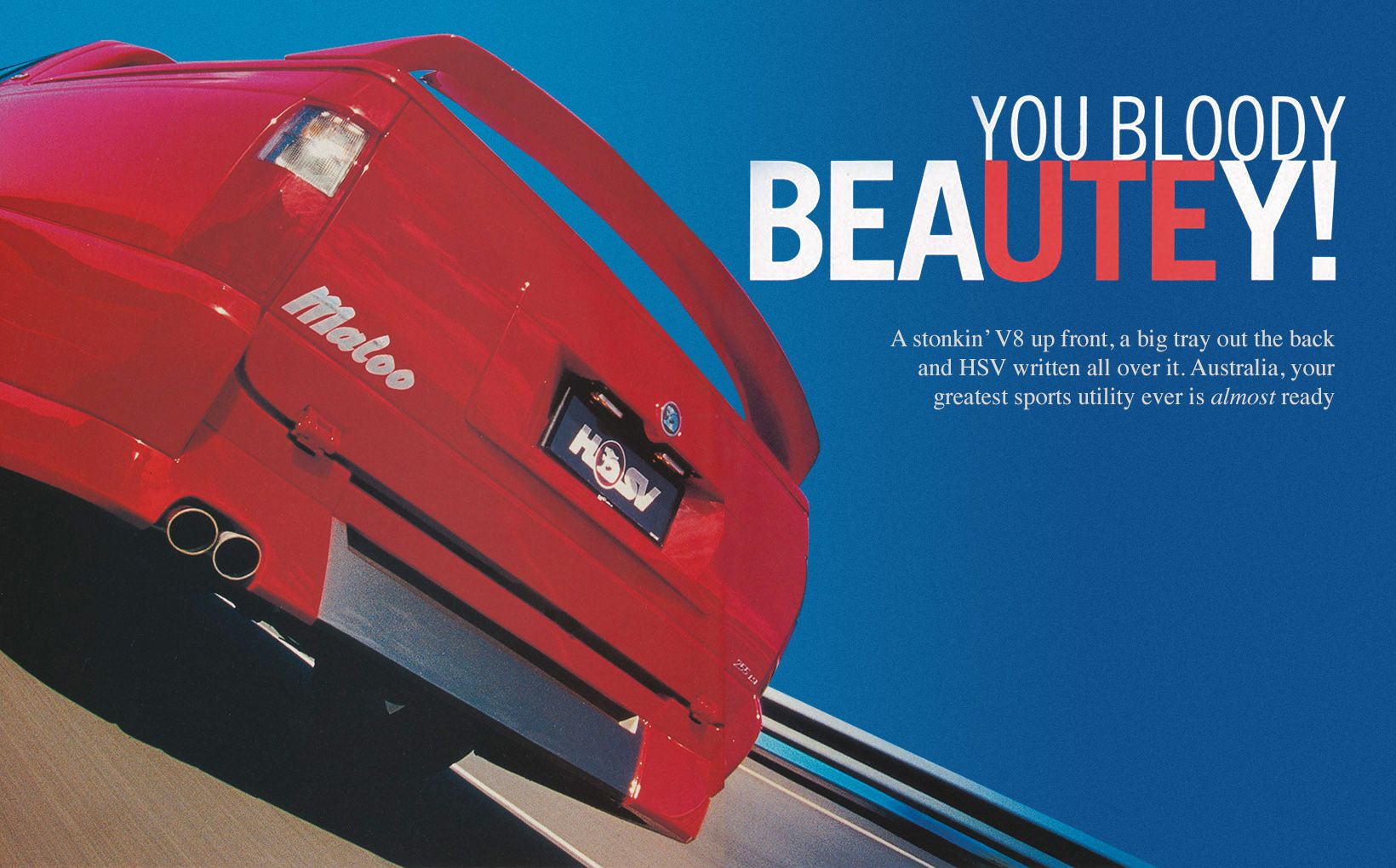 A stonkin’ V8 up front, a big tray out the back and HSV written all over it. Australia, your greatest sports utility ever is almost ready.

Tough utes. They’re as Australian as burgers with beetroot. From Broom to Bondi, the Aussie ute has a following larger than a politician’s telephone bill. And the sort of reputation they would kill for. With such strong iconography, it makes you wonder why a herd of bellowing WB V8 utes didn’t perform a synchronised circle work routine at the Olympic opening ceremony. Picture it; five utes making five bug, dusty rings…

Obviously, the people at HSV and Holden think big, too. The new Maloo is a milestone in the development of the sports utility. For the first time in HSV history, it successfully bridges the gap between its commercial vehicle origins and performance car aspirations. There might be a huge tray out the back, but that’s about as dirty as the Maloo gets. Think of it more as a two-do0r sports coupe with the world’s biggest boot. And that’s precisely what HSV wants. 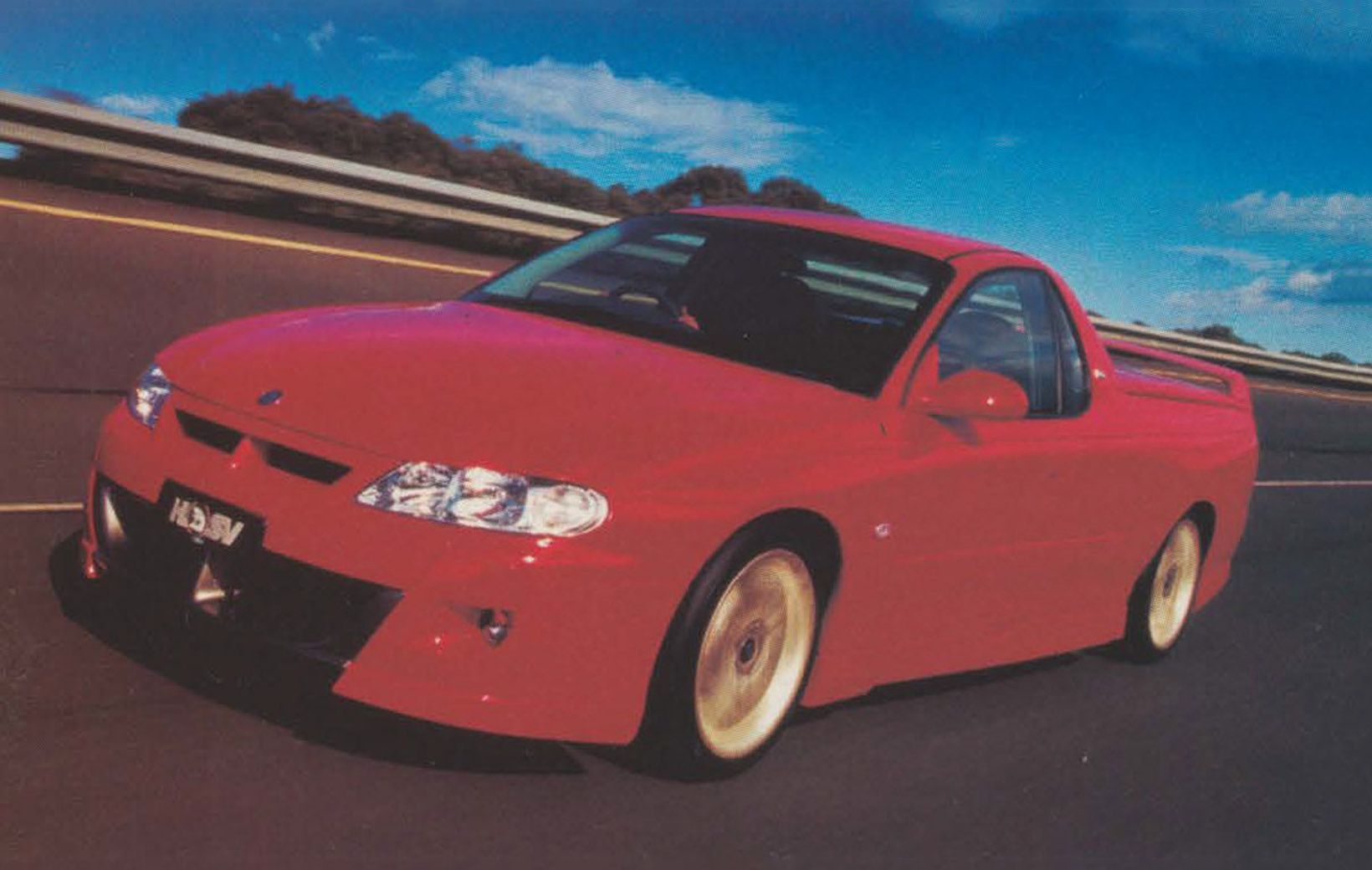 From the outset, Holden intended to incorporate the semi-trailing arm independent rear that became standard in bot VT sedan and wagon in 1997. Ans so the VU Commodore ute is Holden’s first ever without a live rear axle. Comparisons with VX Clubsport are interesting. The Maloo is considerably stretched in both length and wheelbase (like all Commodore utes, the VU is built on the same basic hardwar as the wagon). Tracks are similar and overall width likewise, but it’s the weight difference (and subsequent power-to-weight benefit) that most people want to know about.

After all, both the Clubsport and Maloo share the 5.7 litre 255kW LS1 V8, the six-speed manual or four-speed auto transmission options, and basic suspension design. The only major differences are rear suspension lune and that the Maloo isn't available with traction control. 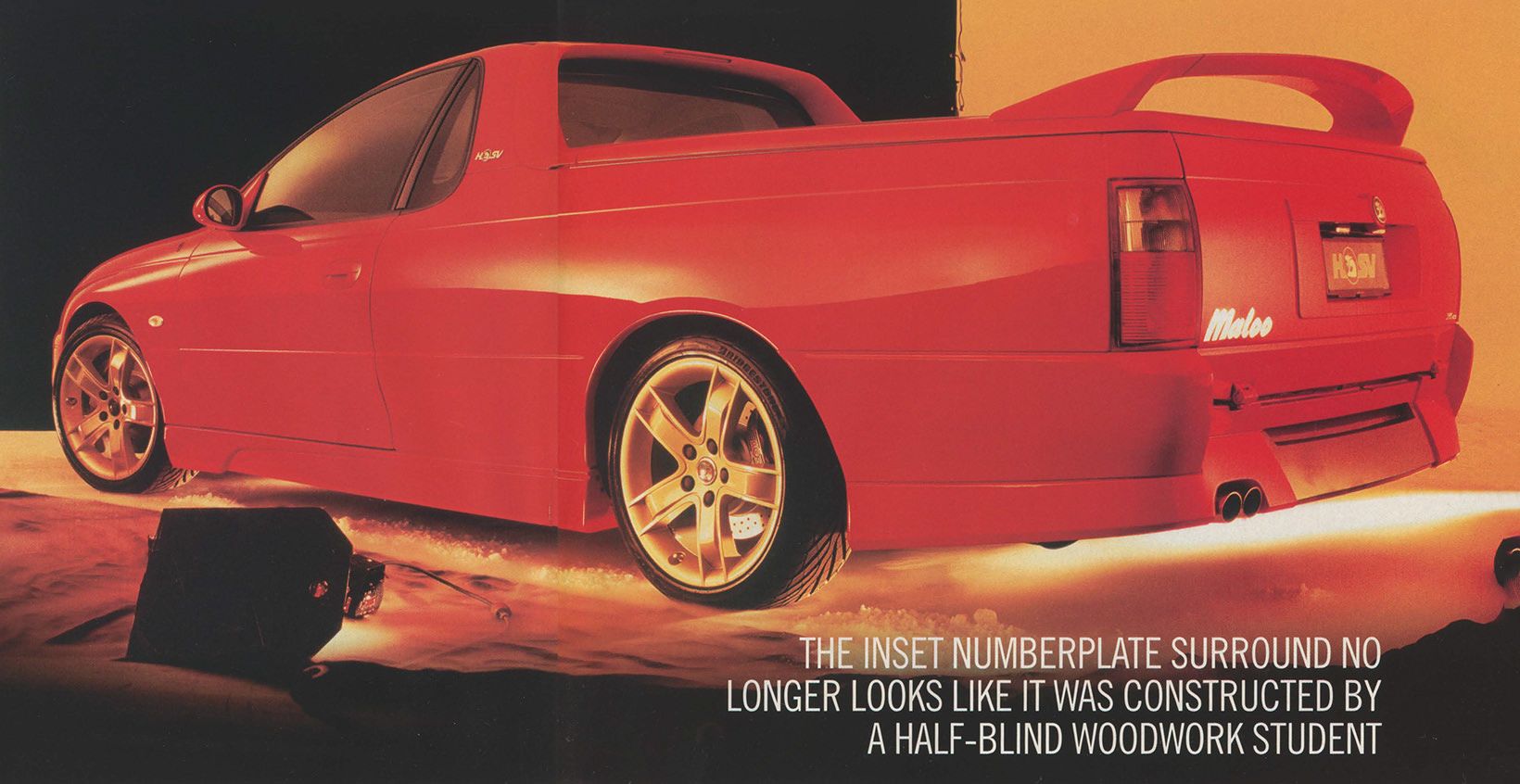 Given sufficient rear-end purchase, the Maloo should theoretically be able to outrun a Clubsport because it weighs 66kg less. Which means 0-100km/h in less than 6.0sec and the standing 400m in around 14sec. Without doubt, the VU Maloo is potentially the craziest, most outrageous package this side of a Gemini packing a 454 cubic inch V8.

The overriding first impression is that not only should the new Maloo perform like no other ute, but that it looks unlike anything that has gone before. Compared with the new VU Commodore SS ute on which it's based, the major changes centre around the front and rear facias, the side skirts, the adornment surrounding the rear window (which incorporates the high-mount stop light), the tray tonneau, its spoiler, and the tailgate. But, this time, modifying the ute to HSV specification has been made considerably easier. For starters, the Holden version now includes a hoop behind the cab (albeit a smaller one than the Maloo's). This means HSV no longer has to remove much of the interior and drill holes through the rear bulkhead to mount the piece. As a consequence, the Maloo can now be built on the main production line alongside Granges and Clubsports, instead of being a labour-intensive off­line operation.

The Maloo's edgy front end is identical to that of the Ian Callum­designed VX Clubsport, but the remainder of the vehicle was styled by TWR's Neil Simpson (who previously worked under Callum at TWR Design). According to HSV's Chris Payne, styling is the most important aspect for the 22-to-30-year-olds who make up the bulk of Maloo owners. 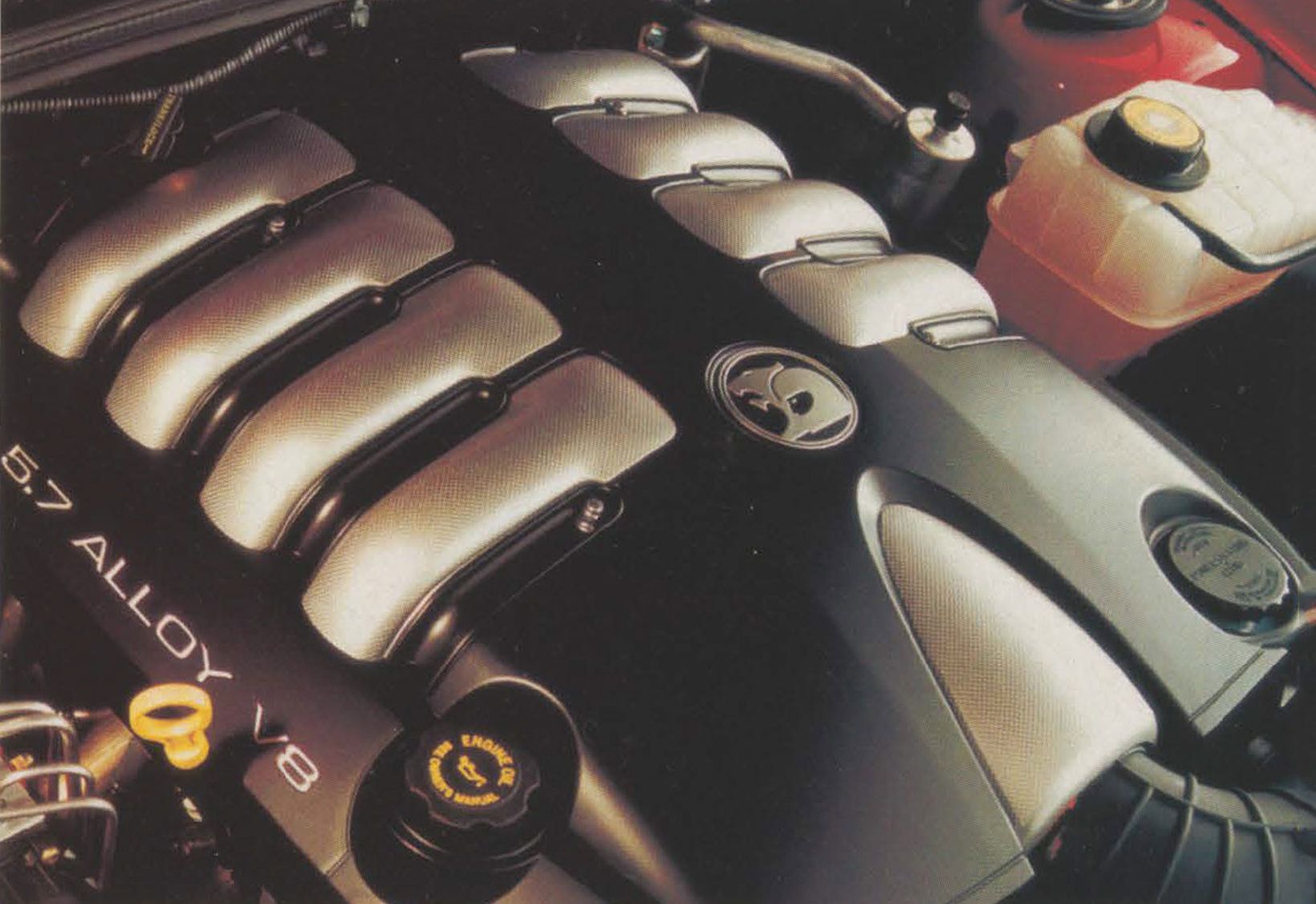 For the first time, the Maloo features a three-piece rear facia (i.e. bumper bar) which has the VX family look, but shares no common parts.

Simpson also had to differentiate between what is now a two-tier model range - a regular Maloo and a premium Maloo R8. With VTII, the Clubsport R8 was HSV's most popular model, so an upmarket version of the VU Maloo made sense. Both models share the basic body kit, but the R8 adds a hard tonneau cover with spoiler and a tray liner. Instead of the VS Maloo's cartoon-huge optional rear wing, the VU R8 item is a much more subtle and attractive design. And the Maloo's inset numberplate surround no longer looks like it was constructed by a half-blind woodwork student.

However, the standout aspect of the Maloo R8 is the hard tonneau cover. The tonneau, with attached spoiler, can be raised in one piece on a pair of gas struts. And it features three cool aluminium ribs down the centre to break up the huge expanse of rear tray cover (it has to conceal a two metre­plus load bed). At the moment, the standard Maloo is slated to receive a regular soft tonneau cover with concealed attachment points. But a favourable reaction at the Sydney Motor Show might bring its incorporation across the Maloo range. 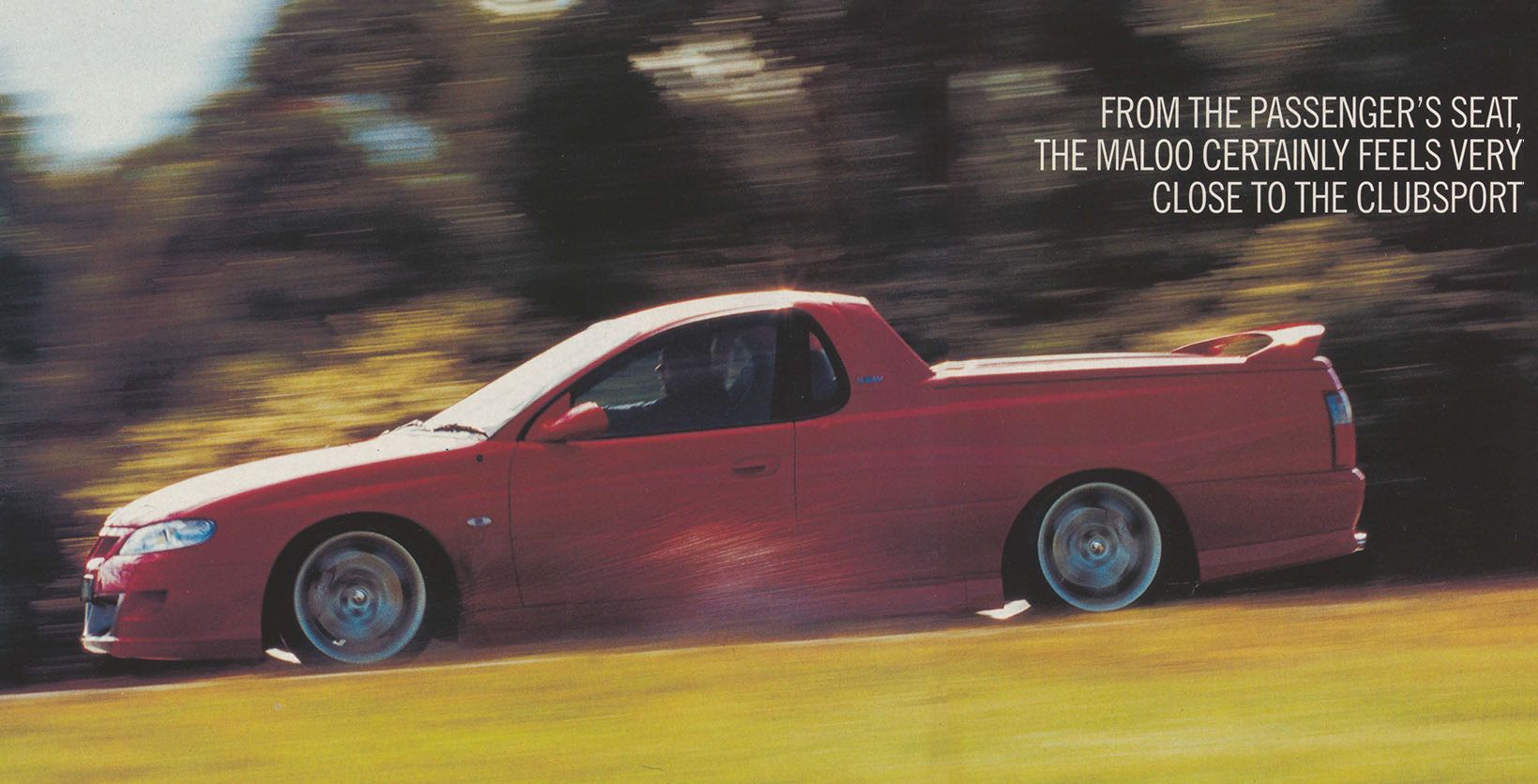 The rest of the Maloo's equipment list reads pretty much the same as for Clubsport. The entry-level Maloo boasts cloth-trimmed Sports seats (leather is an option), the pearlescent instrument surround as fitted to VX Clubsport (although in two colours only - yellow and red), cruise control, twin airbags and the Police-spec ABS brakes from the XU6 and Clubsport.

­­The new braking package is particularly impressive because the old VS Maloo was available with standard Holden brakes only, although the VU retains the VS's load-sensing valve. 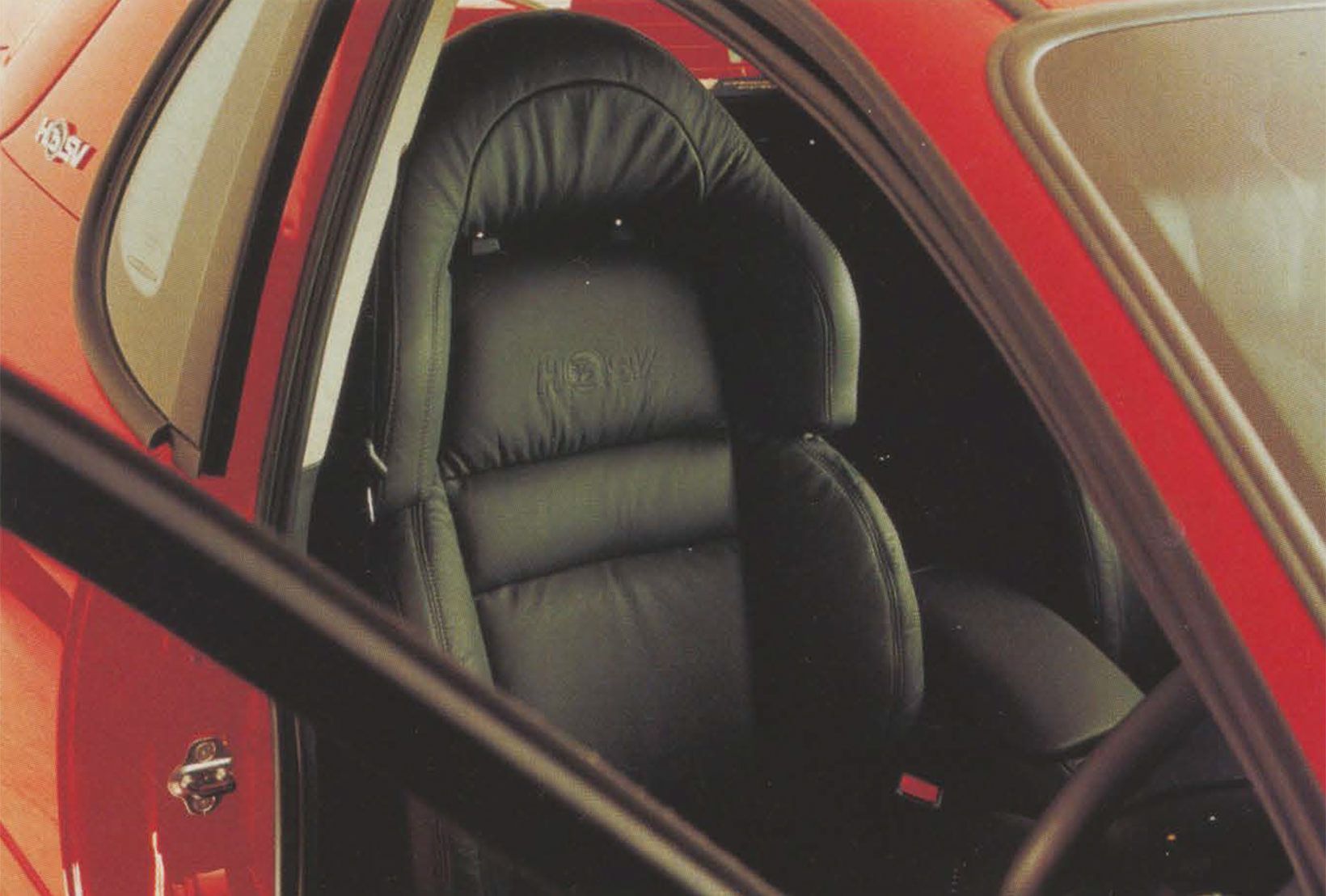 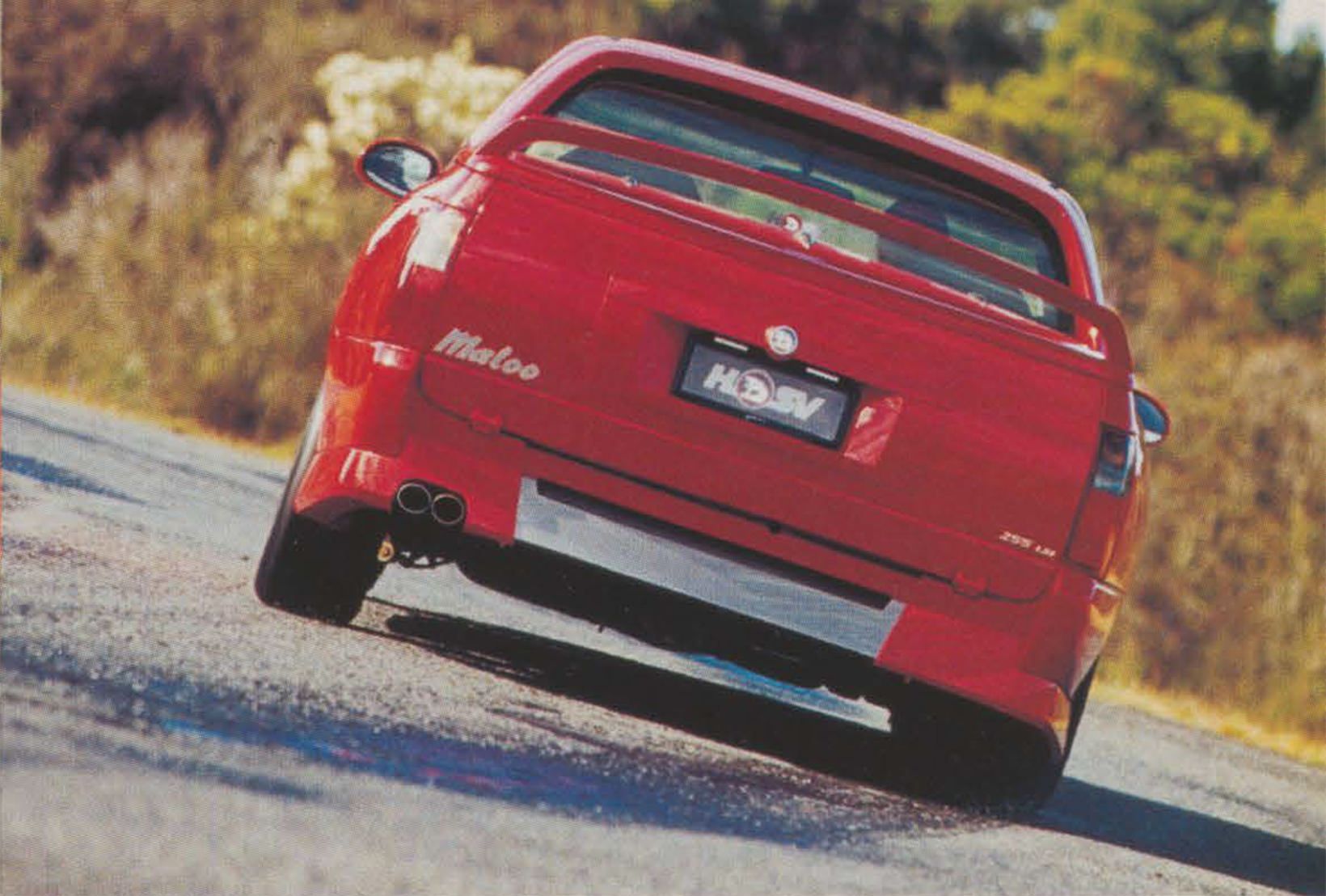 The Maloo R8 adds Performance seats (with leather optional), HSV's Performance brake package (with slotted rotors) and, like we said, the wheel and body kit additions. Premium brakes and an upgraded sound system with a 10 CD stacker are optional across the range, although the side impact airbags fitted to all 1-ISV sedans won't be available.

Surely the most interesting aspect of the new Maloo is the suspension. Ten years ago, motoring writers were frothing over the IRS fitted to the then-new VQ Statesman and Caprice. Now it is standard on even the most basic Commodore ute. The Maloo's suspension tune follows that of the Clubsport, except it has different rear suspension geometry, and is available in Touring specification only (to maintain the load rating). Incidentally, the VU Maloo is certified to carry 356kg in the rear tray, compared with 388kg for the VS. 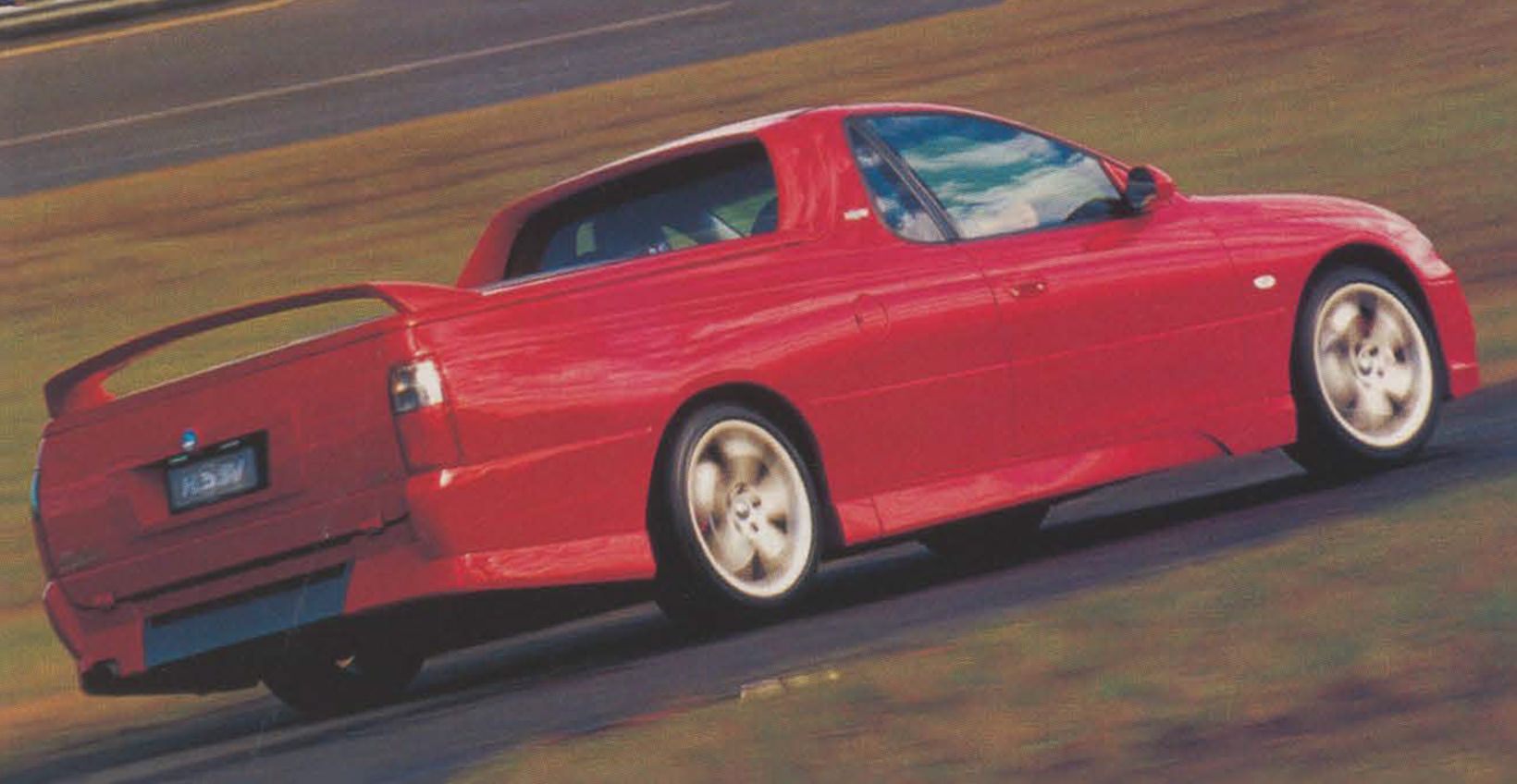 To reduce the level of camber change when a load is on board, the Maloo's rear camber is 0.8 degrees less than on an equivalent sedan. The rear shocks also have a larger bore -35mm versus 30mm - and a larger oil capacity in order to better cope with heat stresses. The new shock absorbers are more expensive, but more durable at the same time. Conversely, the rear sway bar is slightly smaller in diameter, but by how much exactly we can't say. The Maloo is still undergoing final development testing and this is one aspect still to be finalised.

According to Mark Thomas, HSV's chassis engineer, the VU Maloo's dynamics are streets ahead of its predecessor. Not only do the increases in track and wheelbase make the car feel more stable, but the IRS makes it much easier to reach a desirable compromise between ride and handling. At Holden's Lang Lang proving ground, the live axle VS Maloo could occasionally be a handful. Through clips at 100km/h and on corrugations, the VS danced around like a Spice Girl, requiring constant steering correction, where the VU remains totally unfazed. From the passenger's seat, the new Maloo certainly feels very close to the impressive Clubsport. 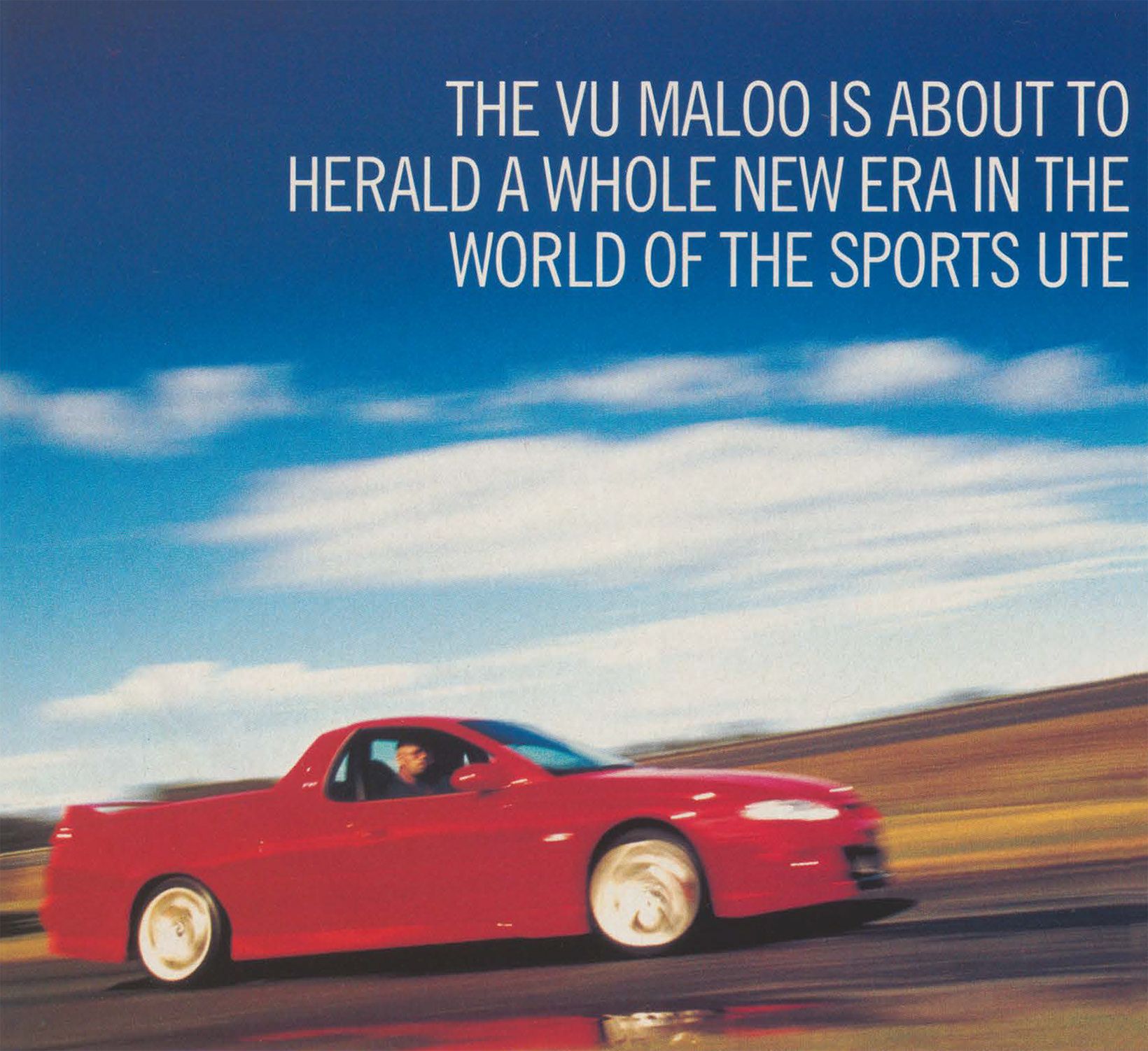 The VU Maloo was at the Sydney Motor Show in November, but it won't be on sale officially until the Melbourne Motor Show in March 2001 (or shortly thereafter), priced in the mid-to-late $40,000s. Even with a launch date towards the encl of the first quarter, HSV expects to sell around 400 Maloos in 2001- with 30-40 being shipped across the Tasman to New Zealand. Compare that with just 40 VS Maloos that left the Clayton plant during 2000, the last of which was built in late September.

The best the old Maloo ever managed was around 300 in a full year, so HSV is certainly confident. But then again, who wouldn't be? The VU Maloo is about to herald a whole new era in the world of the sports ute.