Holden Commodore design to driveway: The V-cars you never saw! 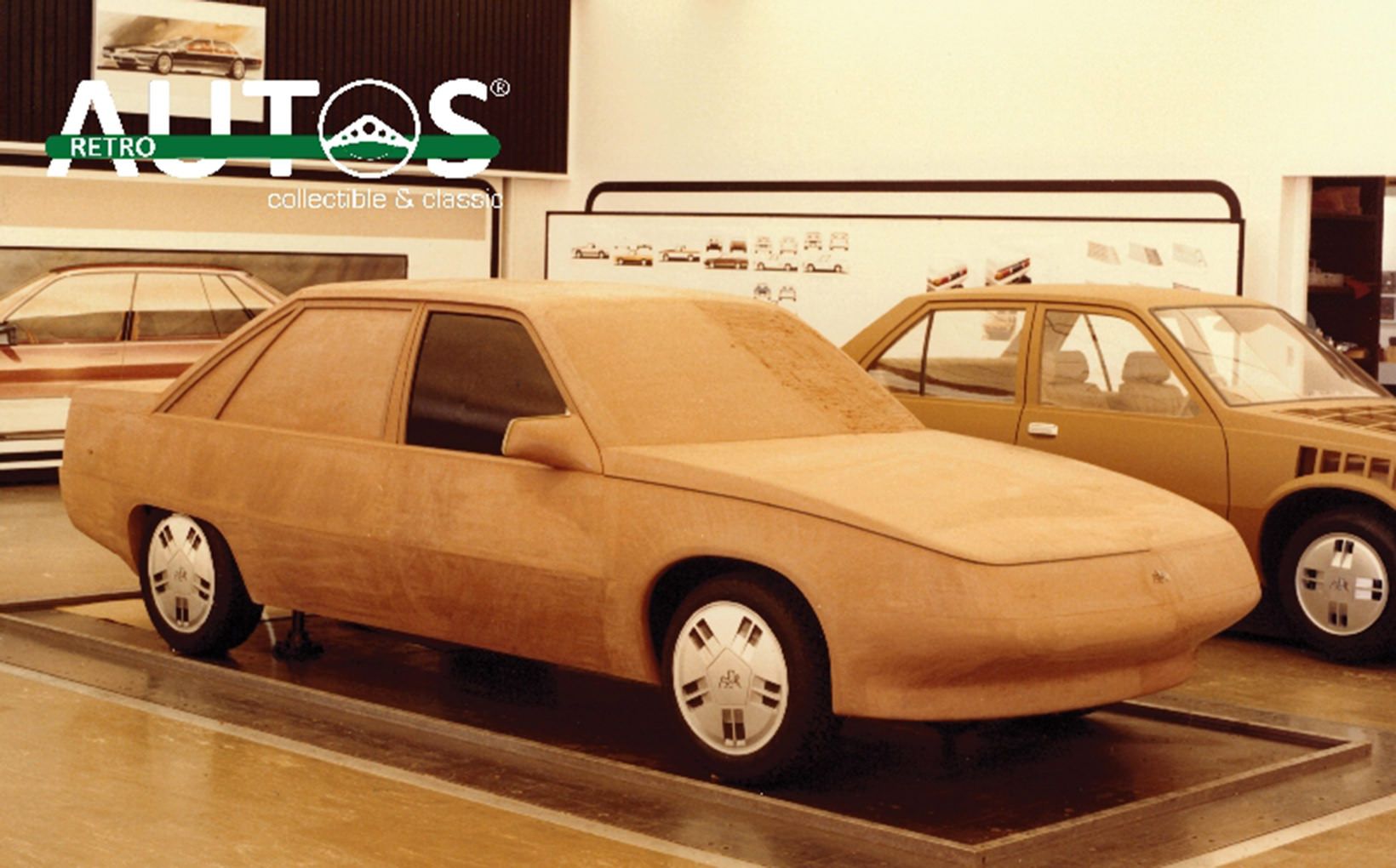 Soon, in upcoming editions of Retroautos magazine, I will be showcasing how the Holden VB-VL Commodore models went from design to driveway.

It is a complicated and fascinating story that it will stretch over multiple issues of the magazine and, as you have come to expect with a Retroautos feature, it will contain many never-before-seen styling proposal photos.

But with Holden’s recent announcement that the Commodore brand will be withdrawn from the market in 2020 I decided to provide Shannons Club members with a pre-Christmas sneak peak of what to expect.

So, here’s the short version of how the Commodore went from design to driveway.

The 1978 VB Commodore, and its VC-VL successors, was the outcome of a number of programs which, for many reasons, merged in to one.

The first program was the VA Torana planned for release in January 1977. It was scheduled to replace the LX model. The VA was to be followed by a VB Torana in January 1980 and the VC in January 1983. Work on this program started in late 1973. 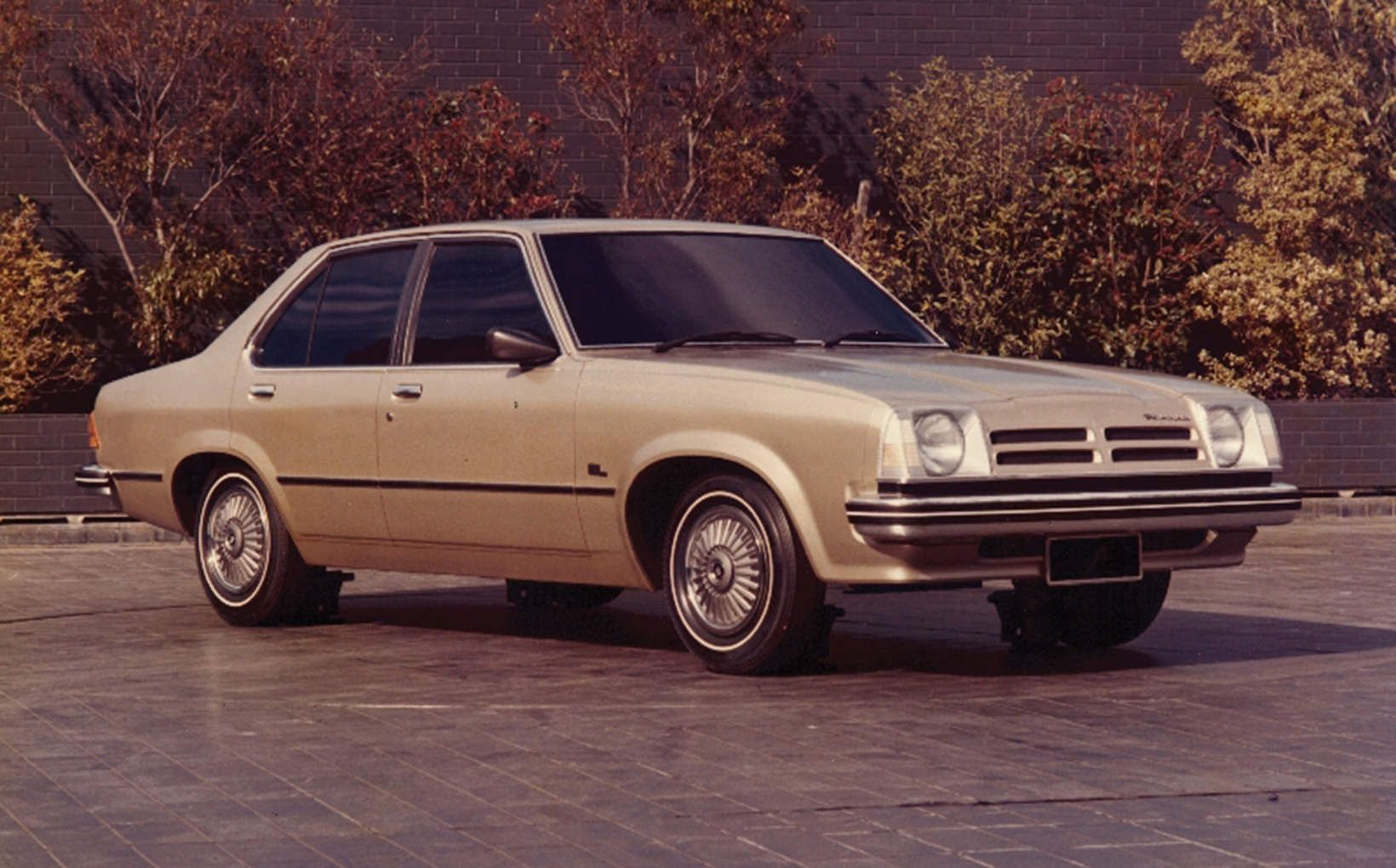 The VA Torana was primarily a slant-nosed version of the LH/LX.

Meanwhile, in February 1973, Holden’s forward plans called for the HQ series to be facelifted into the HJ, which in turn would be replaced by an all new car, the WA, set for release in January 1978.

The WA was to be built on a shortened HQ frame with a wheelbase of 108 inches. The design team, led by Peter Nankervis, shaped a stylish wedged shaped automobile. It was to include a six window sedan, a five door hatch back, commercials and a long wheelbase luxury Statesman/Caprice. But it was not to be.

Financial pressures, shrinking market share (thanks to an aggressive Ford and value for money imports) and an innate conservatism within Holden's top management, caused the accountants and main decision makers to baulk at the $80-100 million cost of developing the WA. They wanted a cheaper solution.

As author Paul Beranger so succinctly wrote in his must-have book Crayon to CAD, Holden’s “business was being driven by bean counters, less interested in product that had customer appeal than concerns over expenditure.” 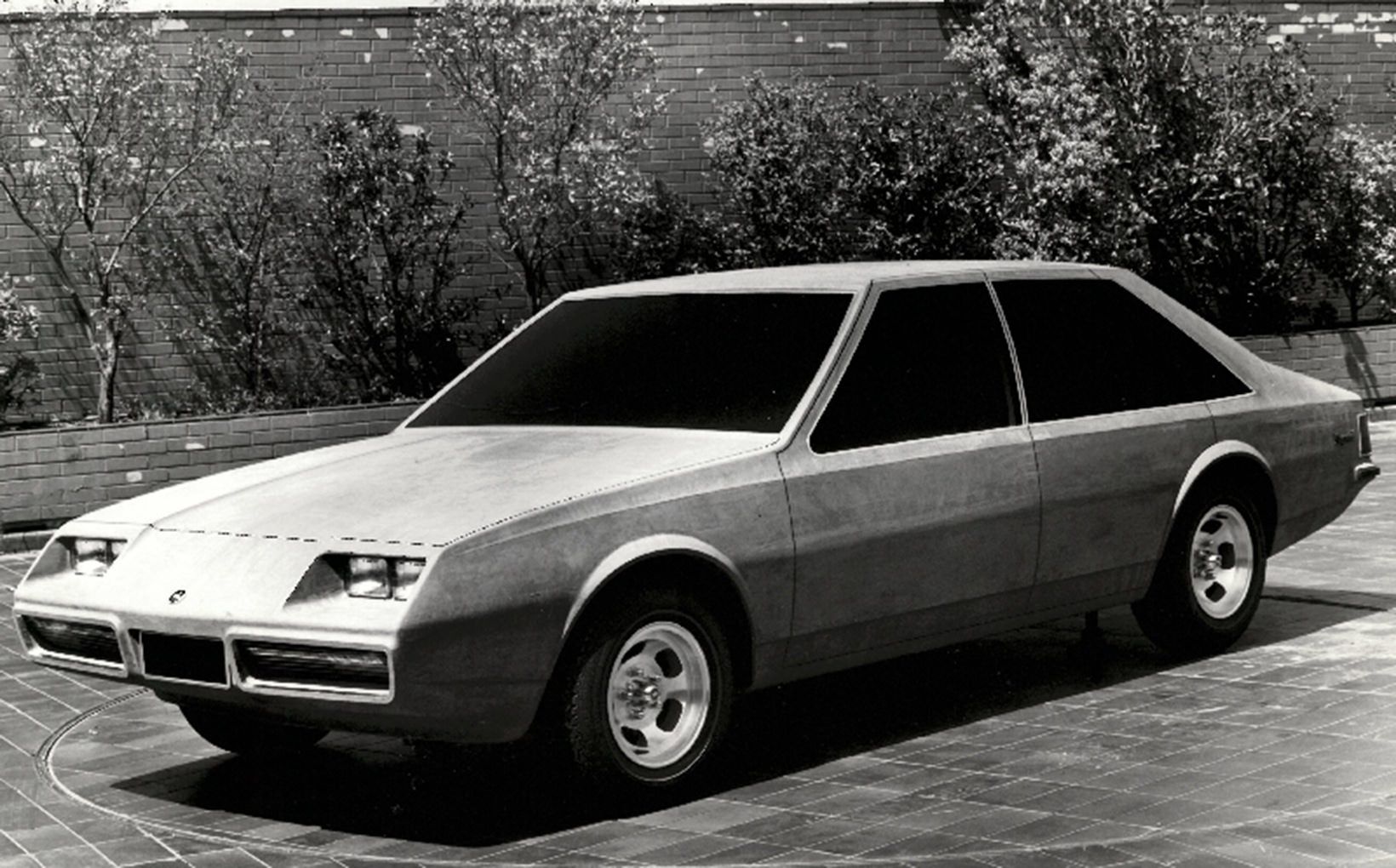 The clean and crisp panels of the WA would have looked good alongside the similarly sharp lines of the XD Falcon.

That cheaper solution involved stretching the life of the HQ into the HJ, HX and HZ models. These were to be followed by a major re-style using as many carryover panels as possible to save money. The restyle was coded WB and would sell as the short wheelbase Kingswood/Premier and long wheelbase commercials and Statesman/Caprice. 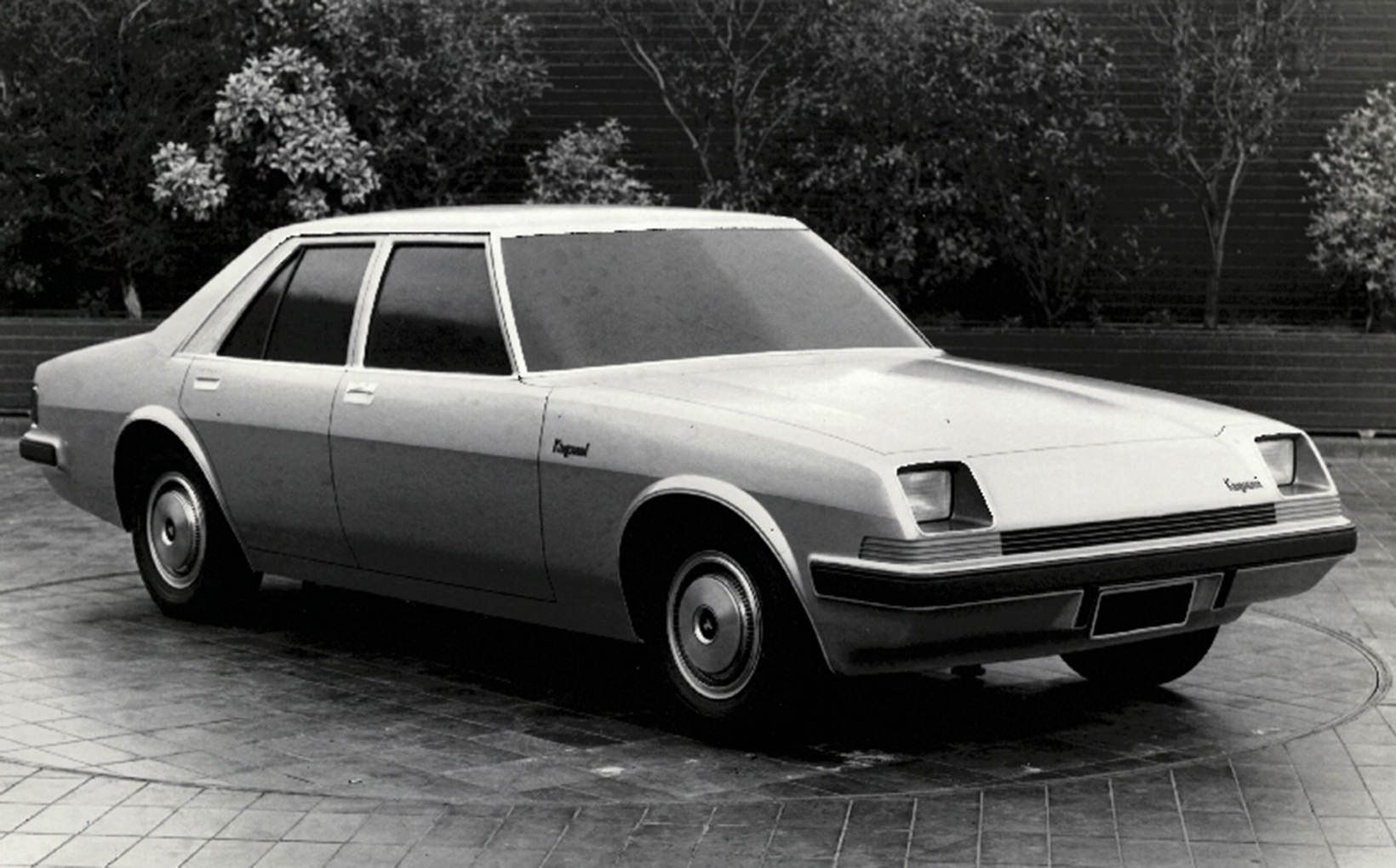 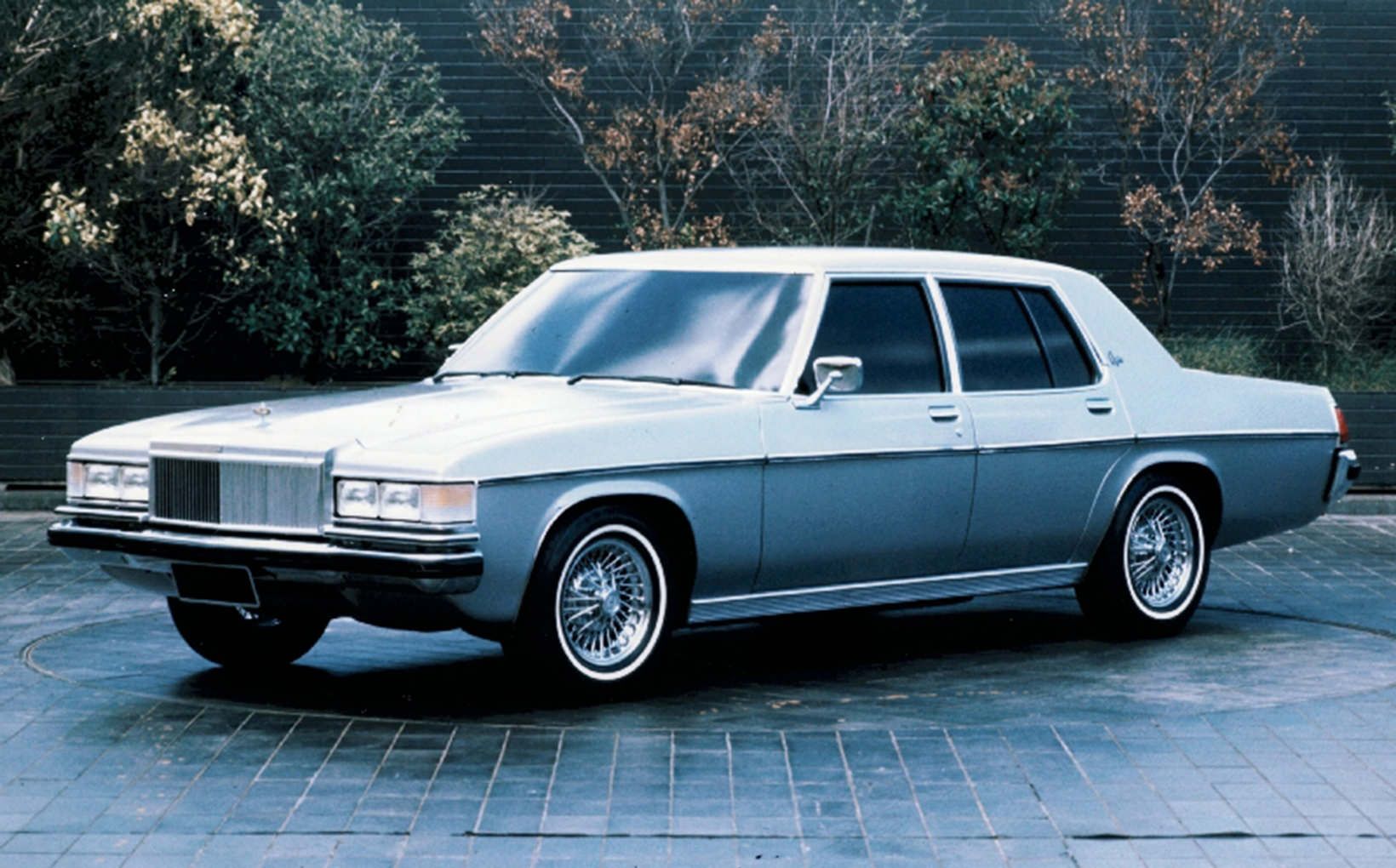 An early proposal for the WB Kingswood sedan. Restricted to re-using the HQ body shell, stylists could not overcome the basics of the model’s design which was shaped in during 1968.The first idea for the WB Statesman/Caprice featured a wide C pillar.

Holden was directed by GM in Detroit to consider using the planned 1977 Opel V-car Rekord/Vauxhall Carlton as a replacement for the VA Torana. A team from Holden went to Opel to investigate the George Castillo and Henry “Hank” Haga designed V-car. The shape and package size was already established by the time the Holden team arrived. 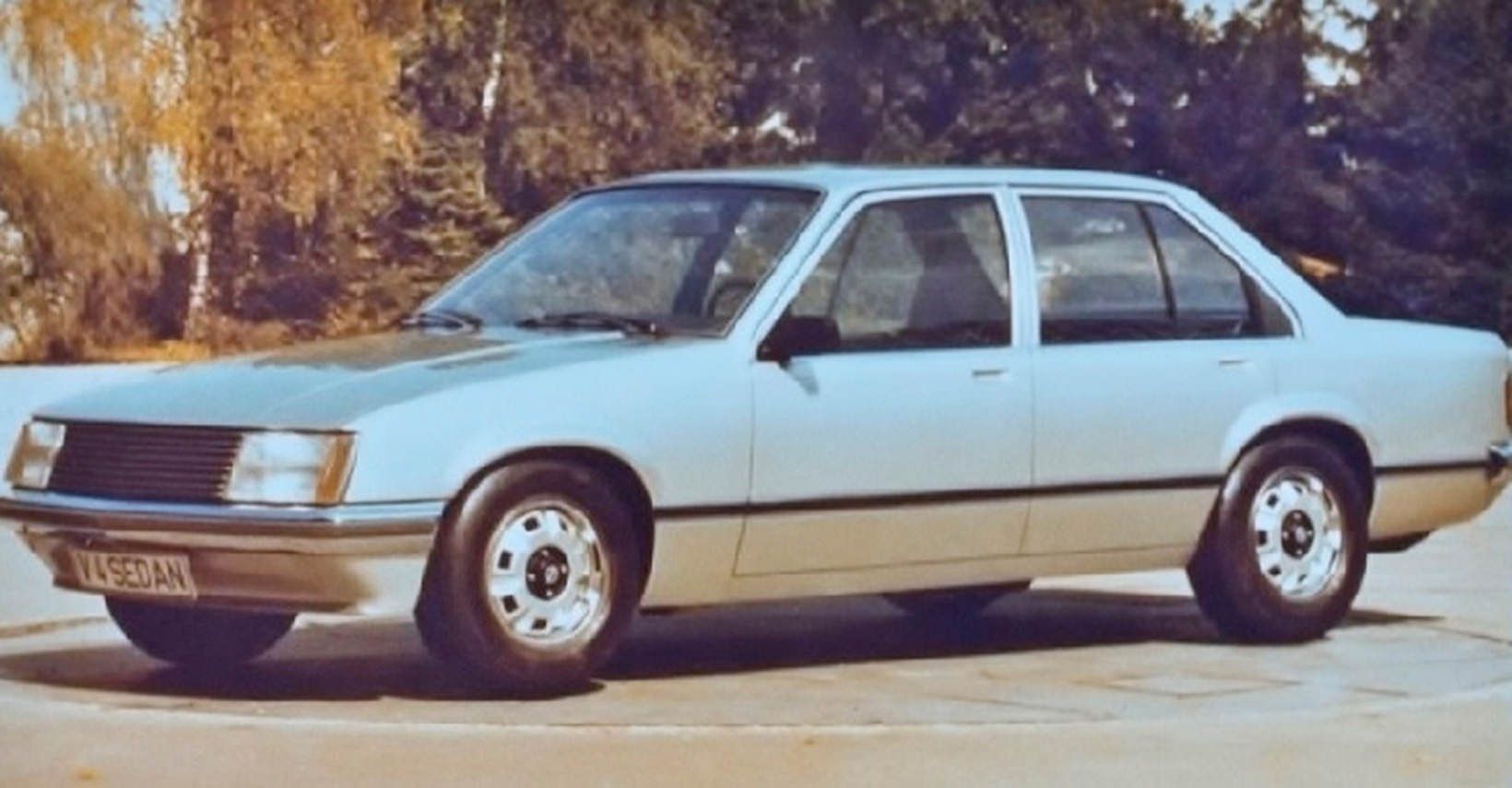 This photo was taken in June 1976 of the final design for the Opel/Vauxhall V-car.

As GM’s chief engineer in Europe, Chapman had been deeply involved in the developing the yet-to-be released V-car. He actively supported it replacing the VA Torana. The HZ would be retained and transition into the WB and sit above the V-Car in the size and pricing hierarchy.

And so the work on Australianising the V-car began. It is a story that has been told and retold.

The Opel was not strong enough for Australian conditions and Holden ended up spending $100 million strengthening the sedan, about the same amount which senior managers had said was too costly for the full range of WA models. That those same senior managers were no longer with the company, after Chapman had decided to replace many of his senior managers, was cold comfort the many who believed the WA had been a viable proposition.

The Opel derived Commodore was released in November 1978. It was coded “VB” as it followed the still-born VA Torana.

At the same time, the increasing cost pressures resulted in the WB range being cut back to just the commercials and the Statesman/Caprice. The HZ sedan was given the task of carrying Holden’s big car sales efforts and then terminated in April 1980. The smaller VC Commodore, released on 31st March, 1980 would thus become Holden’s mainstream sedan offering.

Even before it was released, stylings of the VB’s successors and variants were well underway.

There were plans for a four cylinder VB. It was characterised by a shortener bonnet and front fenders. 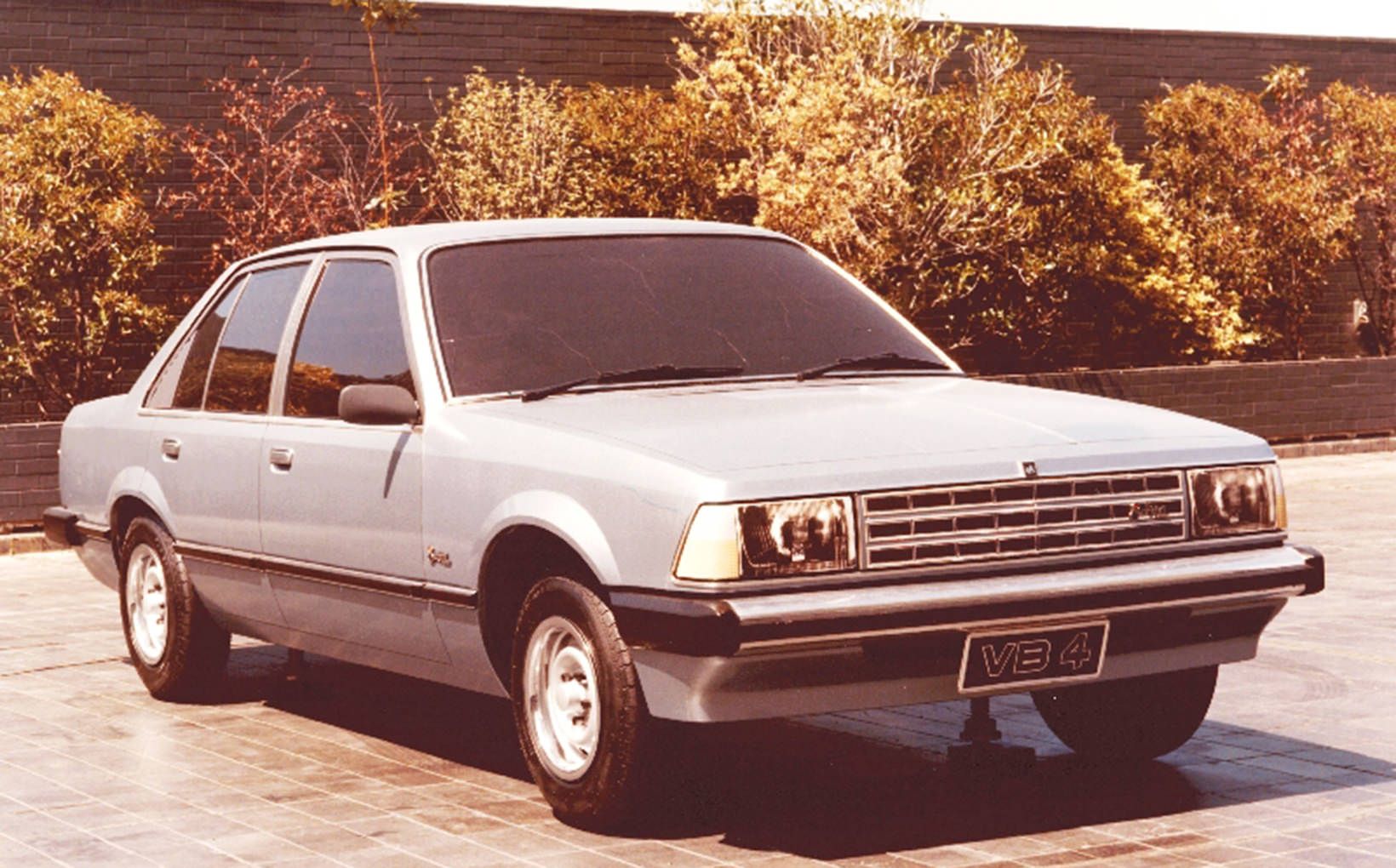 The never released four cylinder design of the VB Commodore. It was to be called the Sunbird.

The six window design was initially planned for the Calais versions of the VH and VK, while the “lesser” models would retain the existing roof line. In the end the six window roof was held over for the entire VK range to give it a more substantial appearance. 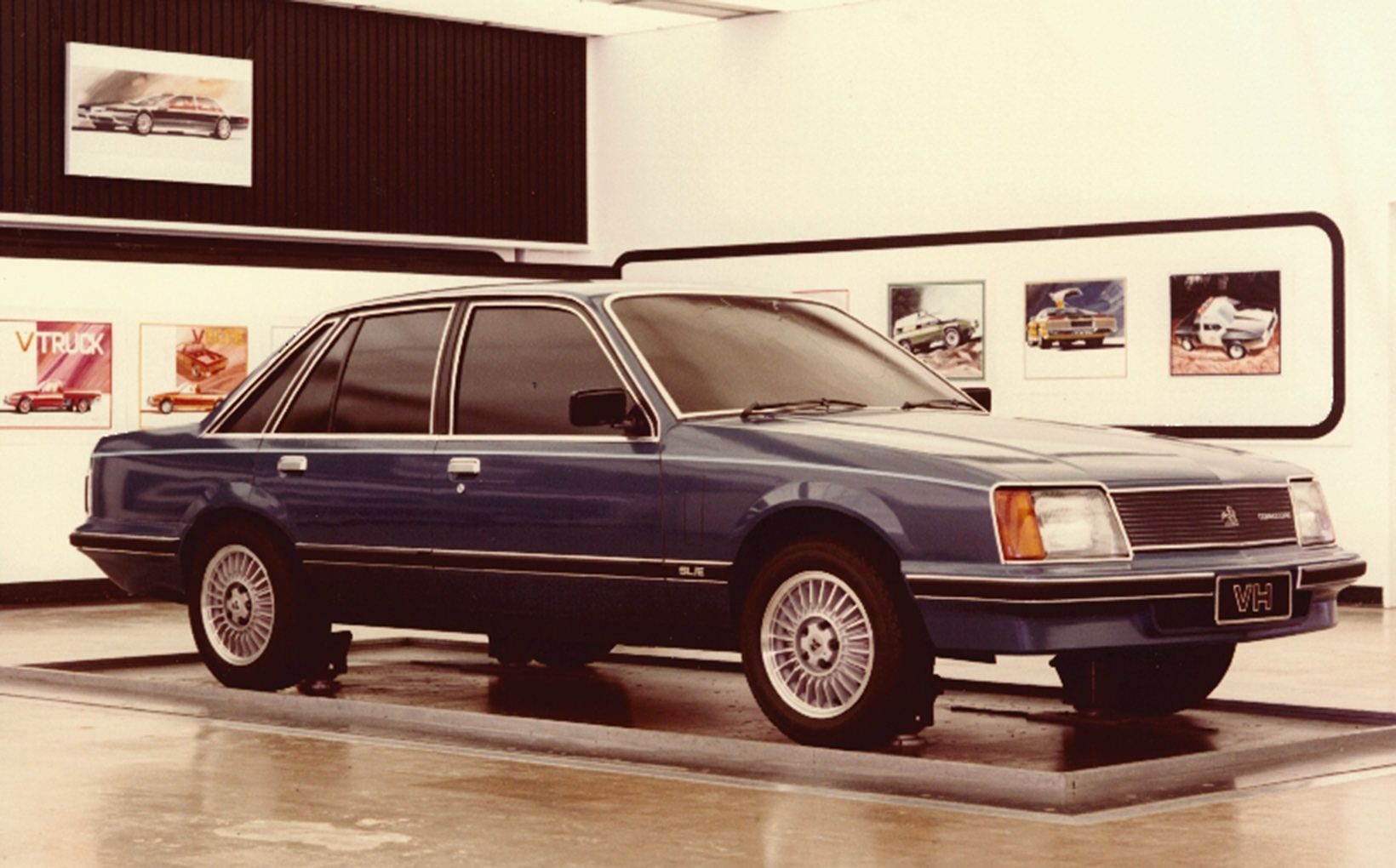 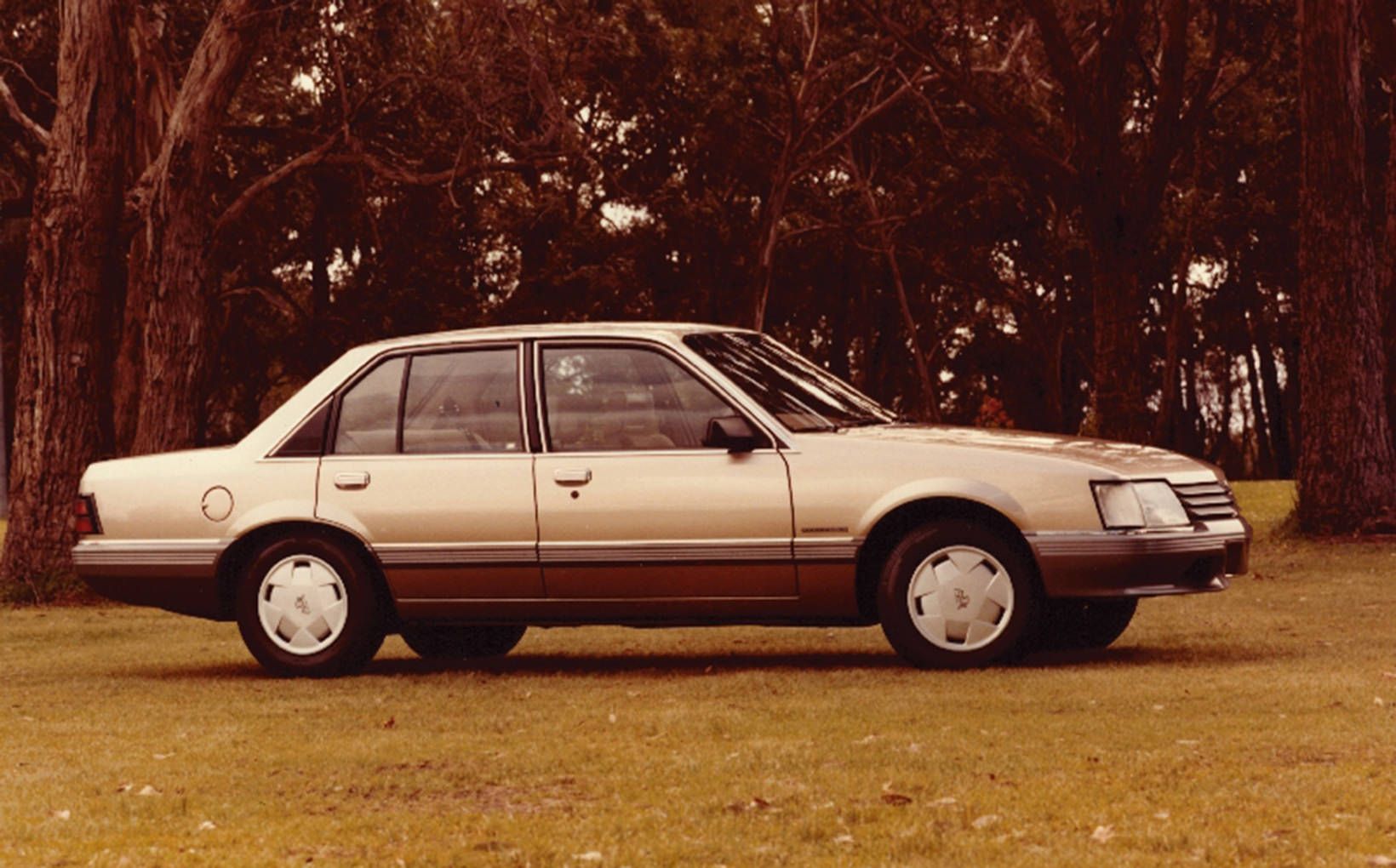 The VH six window proposal and four window VK proposal. Only the Calais was to have the six window roof line.

The six window design is not the same as the Opel Senator’s roof line. Holden’s design team found a way to create the extra window within the existing sheet metal. Opel, on the other hand, had spent millions on a completely different roof and were very embarrassed when they discovered what the Australians had done and how easily it had been accomplished.

The early design proposals for the VL involved major changes, enlarging the car’s appearance and giving it a more rounded shape. This styling direction made it into a clay model but was scrapped as cost pressures, caused in no small way by the success of Ford’s bigger XD-XF Falcon, began to restrict what Holden’s designers were allowed to do. 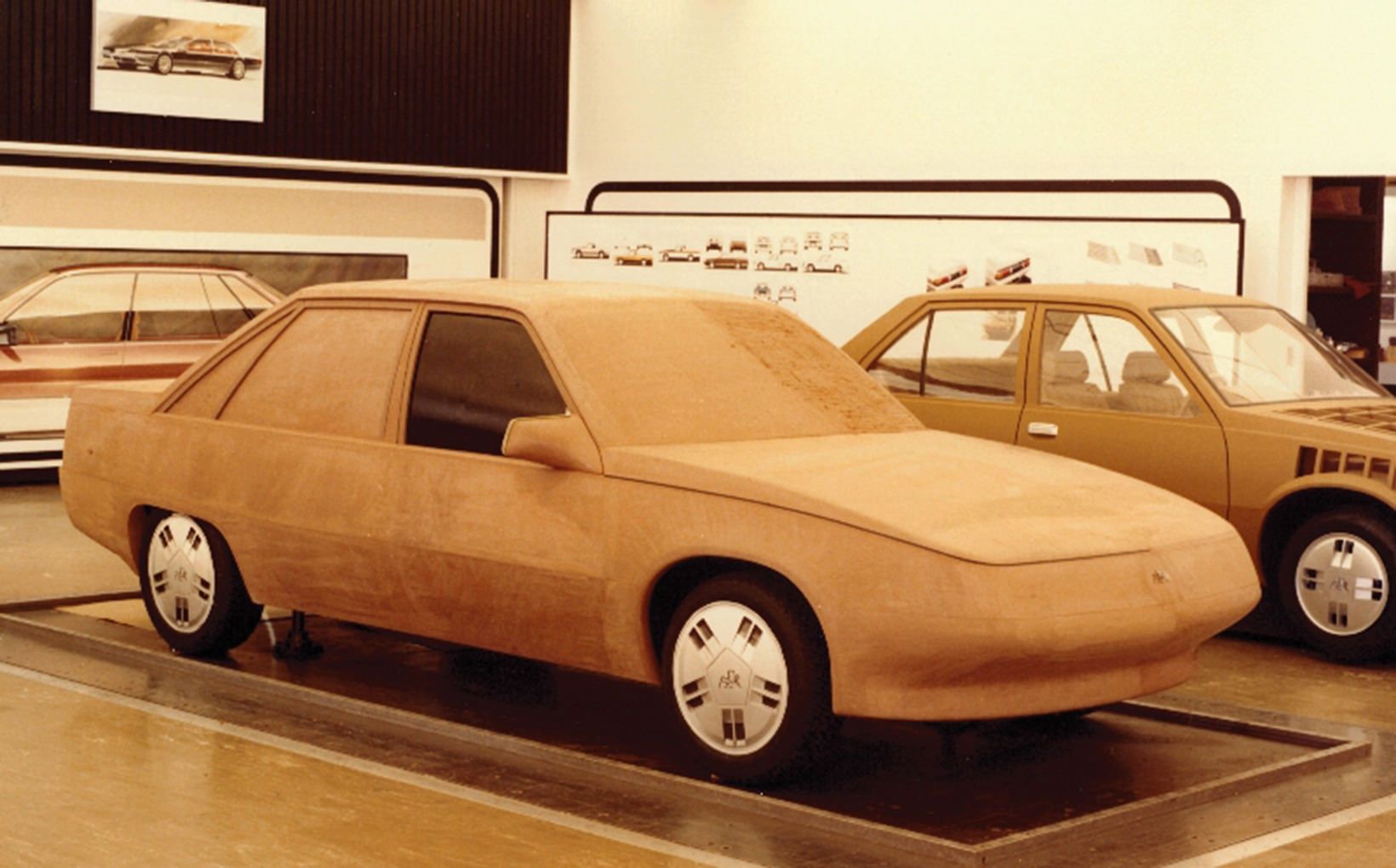 This extensive restyle of the VL, using the old VB-VK centre section, never made it beyond the clay model stage for cost cutting reasons.

By the time the VL was released, Holden had decided to meet Ford’s big car challenge with another Opel derived product. But this time they would widen and lengthen it and call it the VN. 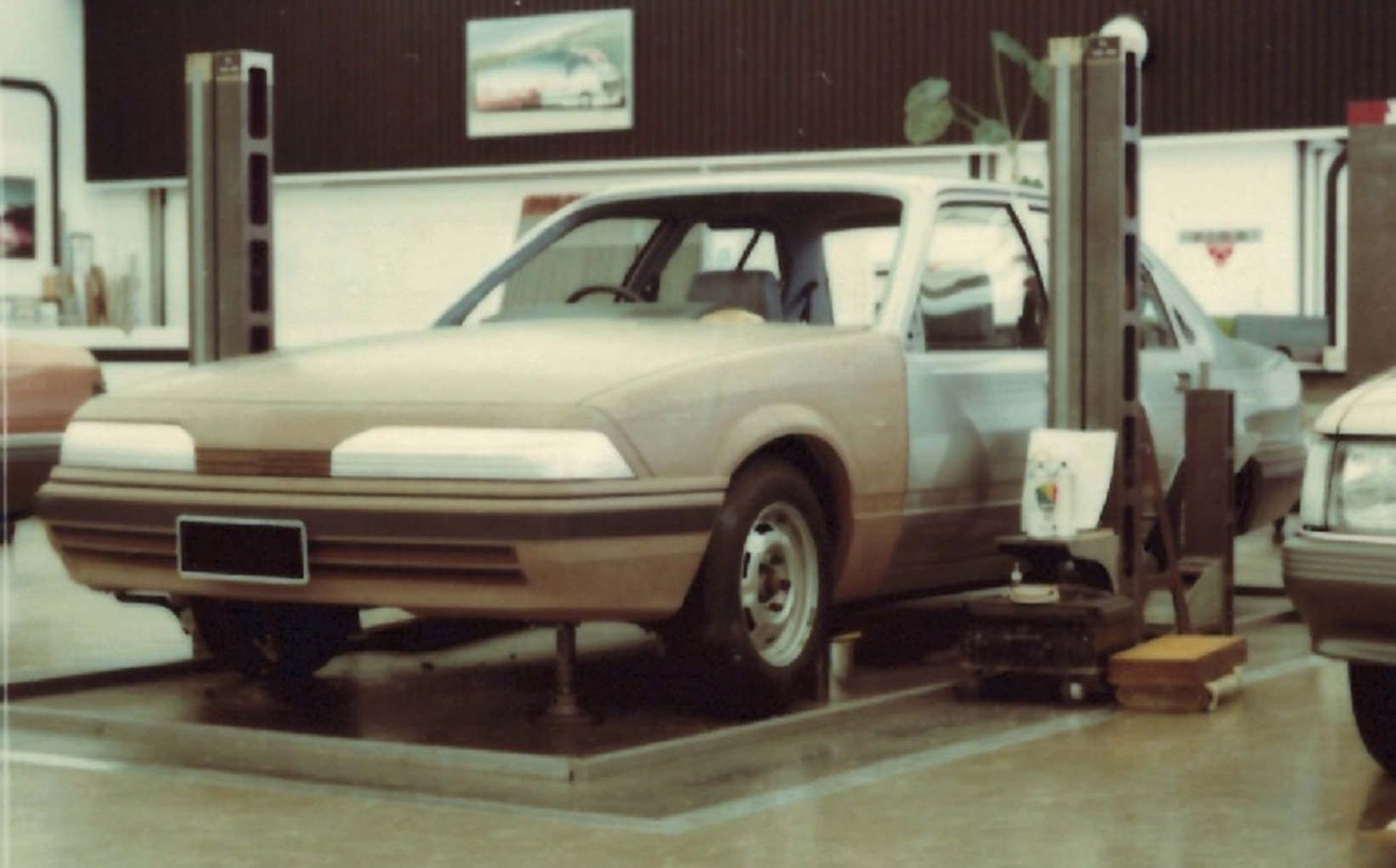 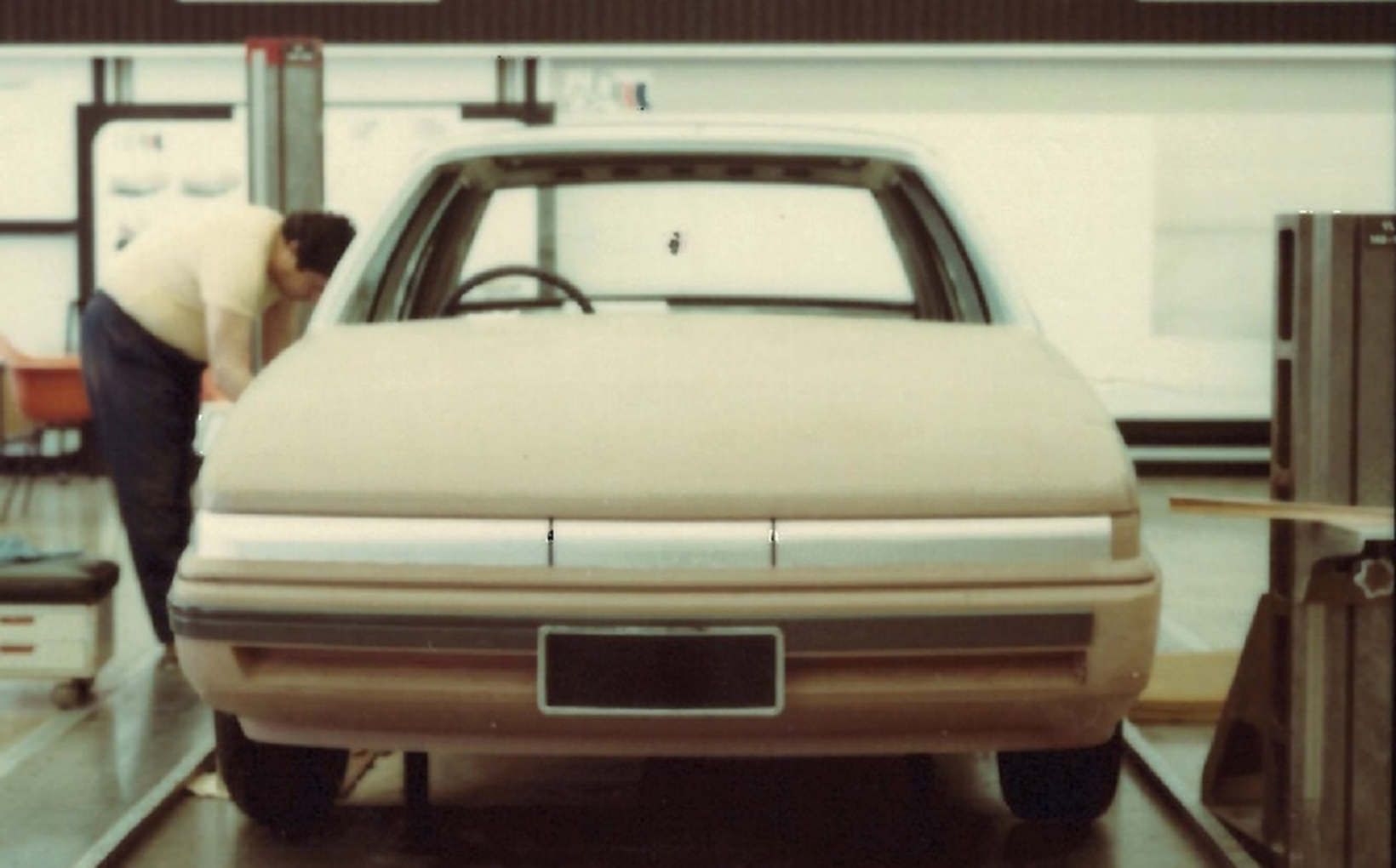 In the early part of next year, Retroautos magazine will be publishing a major feature story series about the development of the Commodore, with more pictures and more behind-the-scenes-insights.