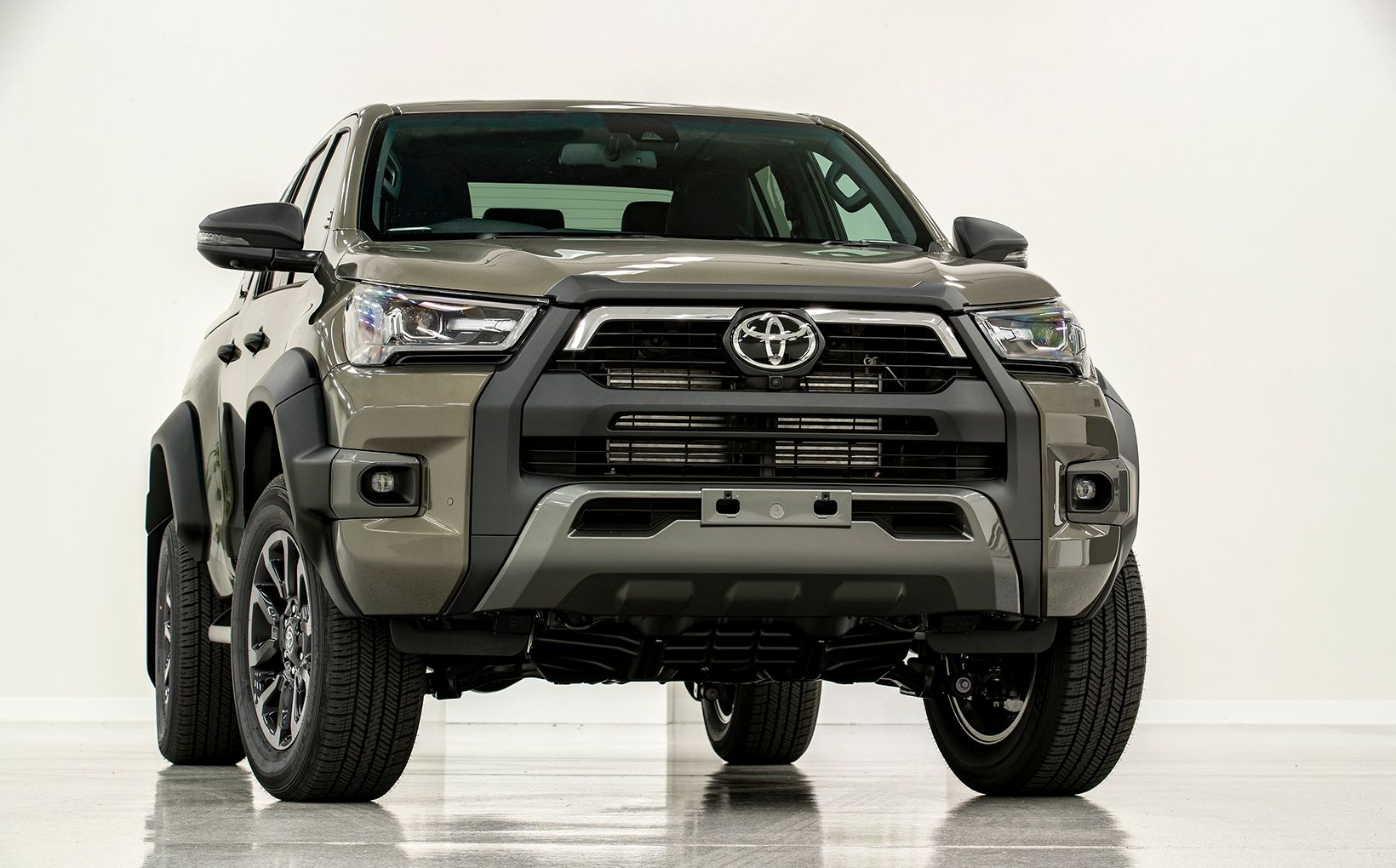 TOYOTA’S iconic 70 Series LandCruiser scored V8 diesel power some time ago with the transplant demanding a wider front track to fit the wider engine. This was achieved by various extensions to front suspension, steering links, body and chassis parts and front differential.

And now, similar widening program has just been announced for the HiLux Rogue which will appear later this year in “Monster Truck” guise.

At the rear, engineers extended axle length – on a rigid differential arrangement – and then set about re-jigging the suspension, including moving the dampers further out towards the wheels. 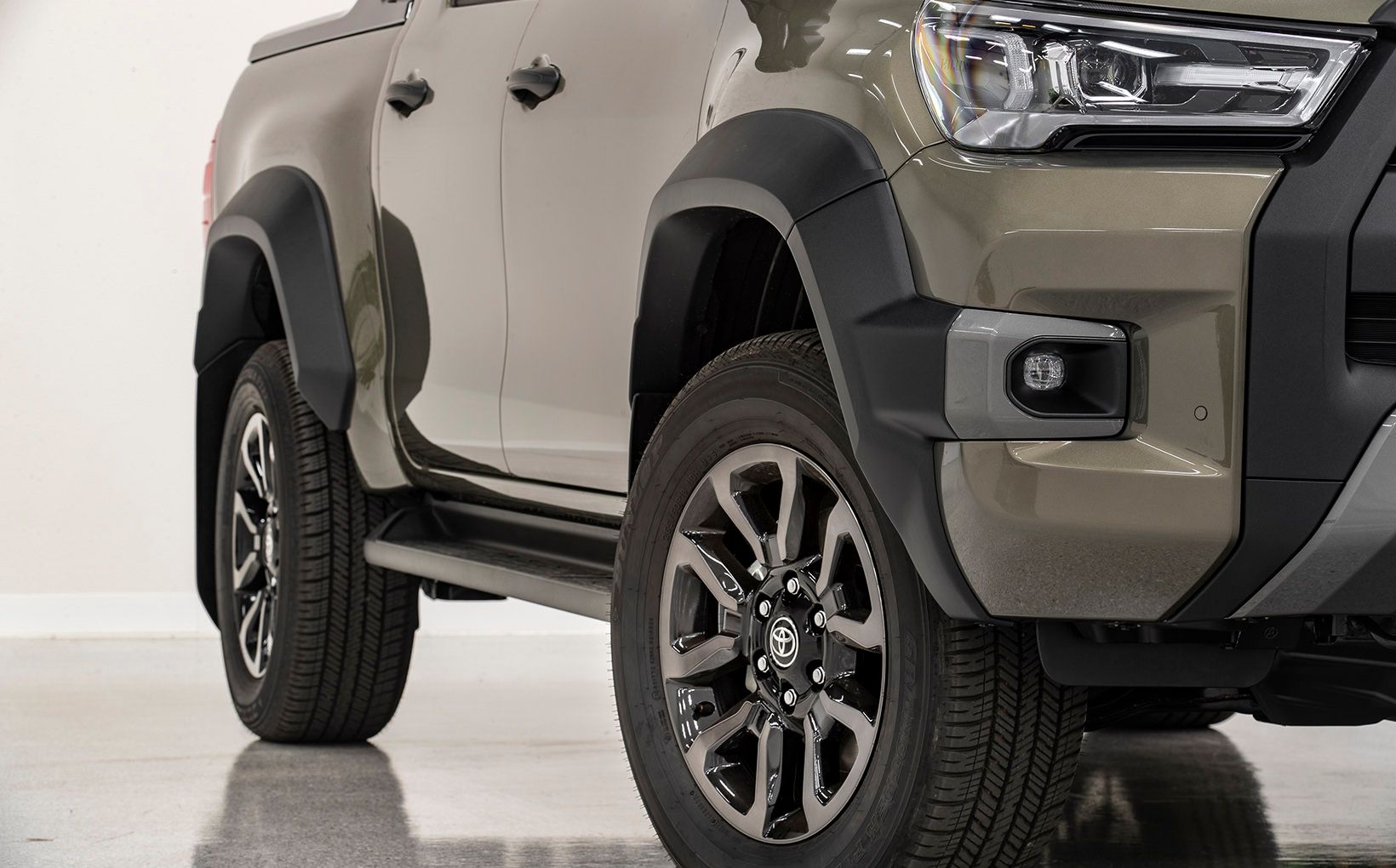 The HiLux Rogue will appear later this year in “Monster Truck” guise.

For the first time on HiLux, a rear stabiliser bar has been installed to enhance cornering stability and ride comfort.

As a result of the suspension changes, roll rigidity has been enhanced by 20 per cent, which is said to improve steering feel when cornering and changing lanes.

The Rogue features improved stopping power with rear ventilated disc brakes replacing the existing drum brakes, while new 17-inch front disc brakes are an inch bigger than they were before.

Due to the increased track width, wide track over-fenders and mudguards have been installed, while the front body extension has been widened to integrate with the front bumper.

The latest developments are a continuation of what some describe as Toyota’s drip-feed “democratisation” of equipment, a policy that starts with the top-of-the-range variants then, over time, filters down to other models.

The wide body Rogue may run a mildly tweaked version of the current 2.8-litre turbo diesel four cylinder to stay in touch with its main competitor, Ford’s new Ranger. 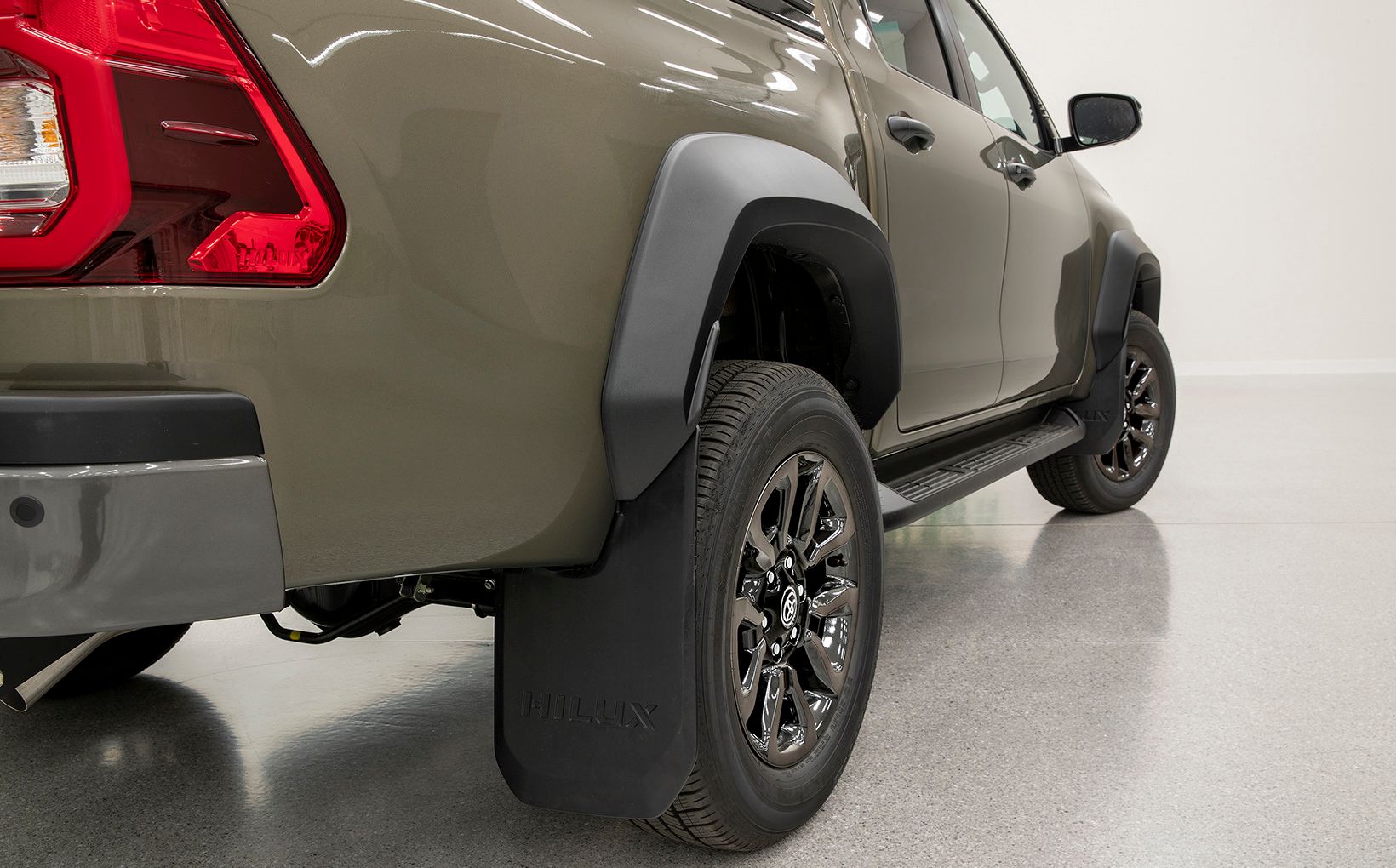 Pumped, wide-track wheel arch extensions and mudguards have been installed.

However, the wide body Rogue will want a lot more grunt under the bonnet if it is to keep Ford’s hot rod Raptor petrol V6 and Ranger diesel V6 in sight.

Enter the giant Japanese car-maker’s “apex” (Predator?) version of the HiLux teased for an appearance sometime late this year or next year.

Which goes part of the way to explaining the real reason behind HiLux’s widening program… potentially in preparation for diesel or petrol V6 power, bringing into the picture the new LandCruiser 300 Series 3.3-litre turbo diesel with 227kW/700Nm on tap.

Such a heart transplant would create an impressive HiLux that would no doubt be seriously coveted by throngs of current and prospective owners.

Powertrain sharing across Toyota’s range is common but shoehorning the 300’s V6 engine into a HiLux would elevate the Japanese ute flagship right up to the main competition. 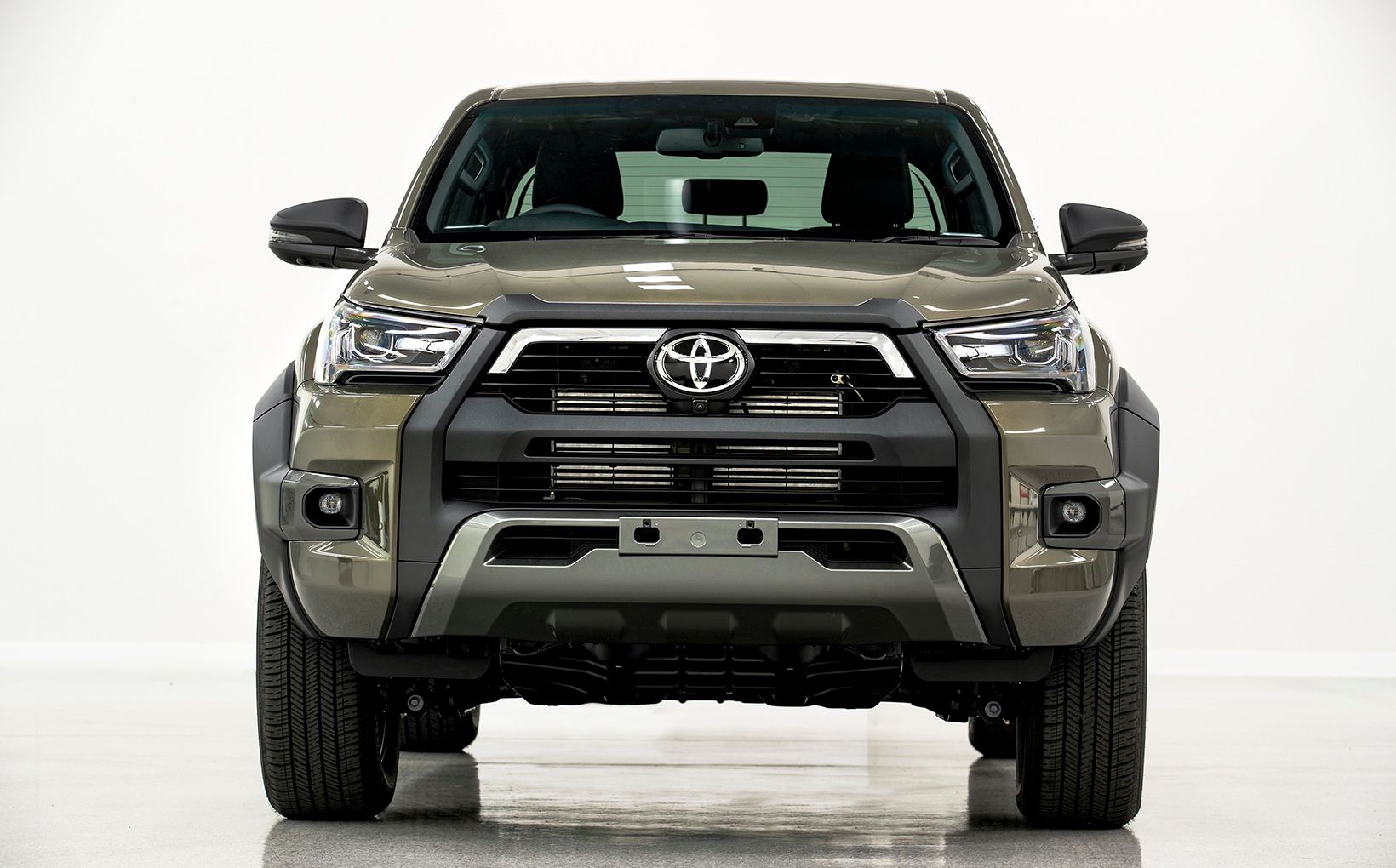 Shoehorning the 300’s V6 engine into a HiLux would elevate the Japanese ute flagship.

Toyota Australia hasn’t denied the possibility of a V6 diesel HiLux “down the track” but events overseas involving Toyota’s Gazoo Racing (GR) outfit suggest a V6 of some kind might be more likely than not.

Toyota already has a LandCruiser-powered HiLux of sorts in the shape of its GR DKR HiLux T1+ that competed in this year’s Dakar Rally with the 298kW/660Nm 3.5-litre twin-turbo petrol V6 from the US-spec 300 Series and related Lexus LX.

Apart from repositioning the factory intercooler, no changes to the engine were made as it was deemed capable and robust enough to operate under rally raid conditions in standard form.

Further fuelling V6 HiLux speculation is the fact that earlier models already had an engine bay big enough to accommodate the 4.0-litre petrol V6 that was dropped from the Australian market in late 2017.

Were Toyota to go for the Dakar-proven petrol V6 for its HiLux “Apex” model, it would comprehensively out-punch the Ranger Raptor’s 292kW/583Nm 3.0-litre V6 turbo-petrol. 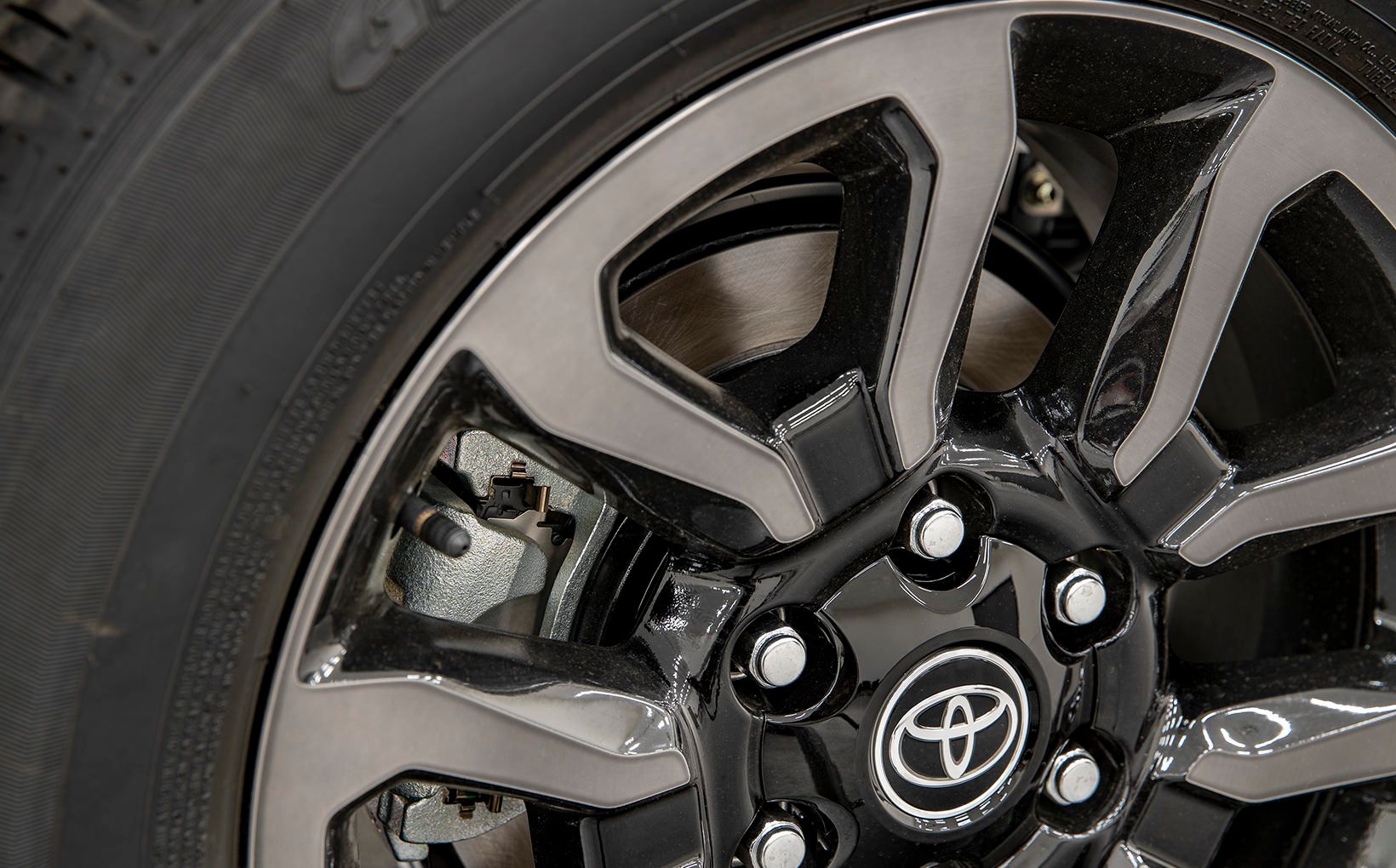 Toyota Australia hasn’t denied the possibility of a V6 diesel HiLux “down the track”.

As the HiLux Rugged X is being dropped from the range when wide body Rogue appears, it would suggest the “apex” model will be more off-road capable to take full advantage of the extensive revisions and re-engineering of Rogue.

The changes encompass features that HiLux owners have procured from aftermarket suppliers and providers in the past – Toyota Australia has the advantage of a local HiLux “skunk works” that continually develops the vehicle, tests new products and features locally and evaluates their worth for possible inclusion on Australia’s most popular vehicle.

Pricing details for wide-body Rogue were not available from Toyota, though the current variant goes for $70,200 plus on-road costs so the wide-body version is likely to be priced somewhere between that and the new $85K Ford Ranger Raptor.

Which then means an indicative price point around that $85K mark for the HiLux apex model.

“The significant suspension upgrades to the HiLux Rogue not only improve off-road capability but create a more stable and comfortable on-road driving experience,” said Mr Hanley.

“Continuous improvement is a key facet of Toyota’s philosophy and has been clearly achieved by this latest HiLux premium model.” 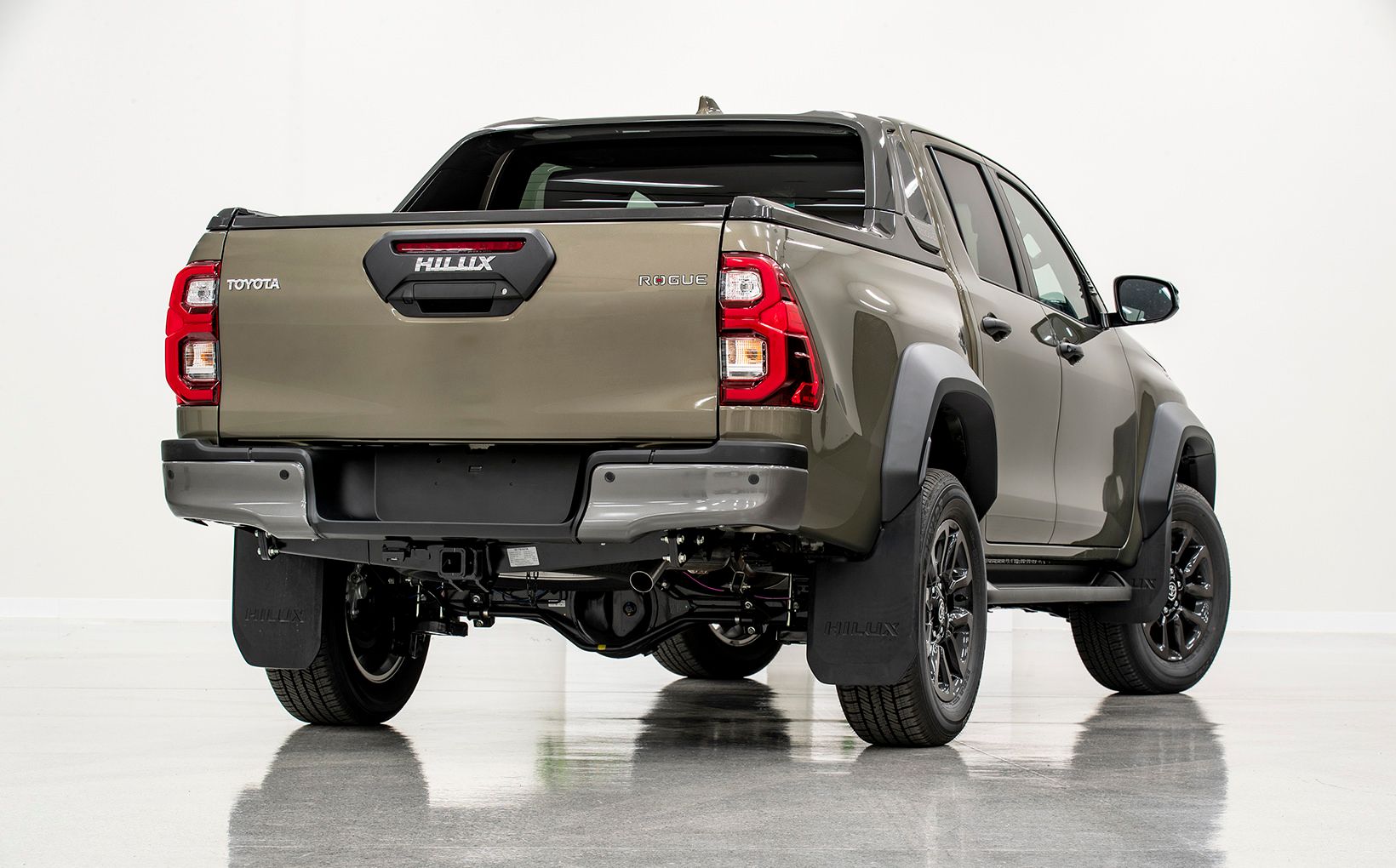 An “apex” performance version of the HiLux is likely to arrive later this year or in early 2023.

Coinciding with the arrival of the wide-bodied Rogue, Toyota is introducing upgrades to core variants of Australia's best-selling vehicle.

SR5 double-cab pick-ups gain extra active safety equipment as standard, with the addition of a blind-spot monitor and rear cross-traffic alert. These features are also included on the Rogue.

A panoramic view monitor has been added to SR5 double-cab pick-ups to help manoeuvre in tight spaces, as have puddle lamps, which replace heated exterior mirrors.

The steering column lock has been replaced by an ID Box anti-theft immobiliser on automatic SR5 grades and above, which adds an extra level of security when starting the car with the smart key.

Since launching in 2018, HiLux Rogue and Rugged X have accounted for more than 17,000 sales, establishing themselves as the halo variants of the HiLux range.