TOYOTA has ripped the covers off its long-awaited GR Corolla this month, the five-door hot hatch revealing bulging bodywork and a hi-po 224kW powertrain, traditional manual transmission, and a clever all-wheel drive system.

With mechanicals largely derived from the GR Yaris, Toyota’s hotted-up Corolla not only provides a bigger and more practical companion to the pint-sized Yaris, but it finally gives the Japanese automaker a proper rival to other hot hatches like the Volkswagen Golf R and Honda Civic Type R.

It’s a market segment Toyota hasn’t played in before, much to the chagrin of company president Akio Toyoda. Toyoda, grandson of Toyota Motor Corporation founder Kiichiro Toyoda, has spent the past decade rebuilding a performance product portfolio for the company, beginning with the first-generation Toyota 86 that launched in 2012, with the ultimate aim of eliminating the brand’s reputation for bland – but dependable – vehicles. 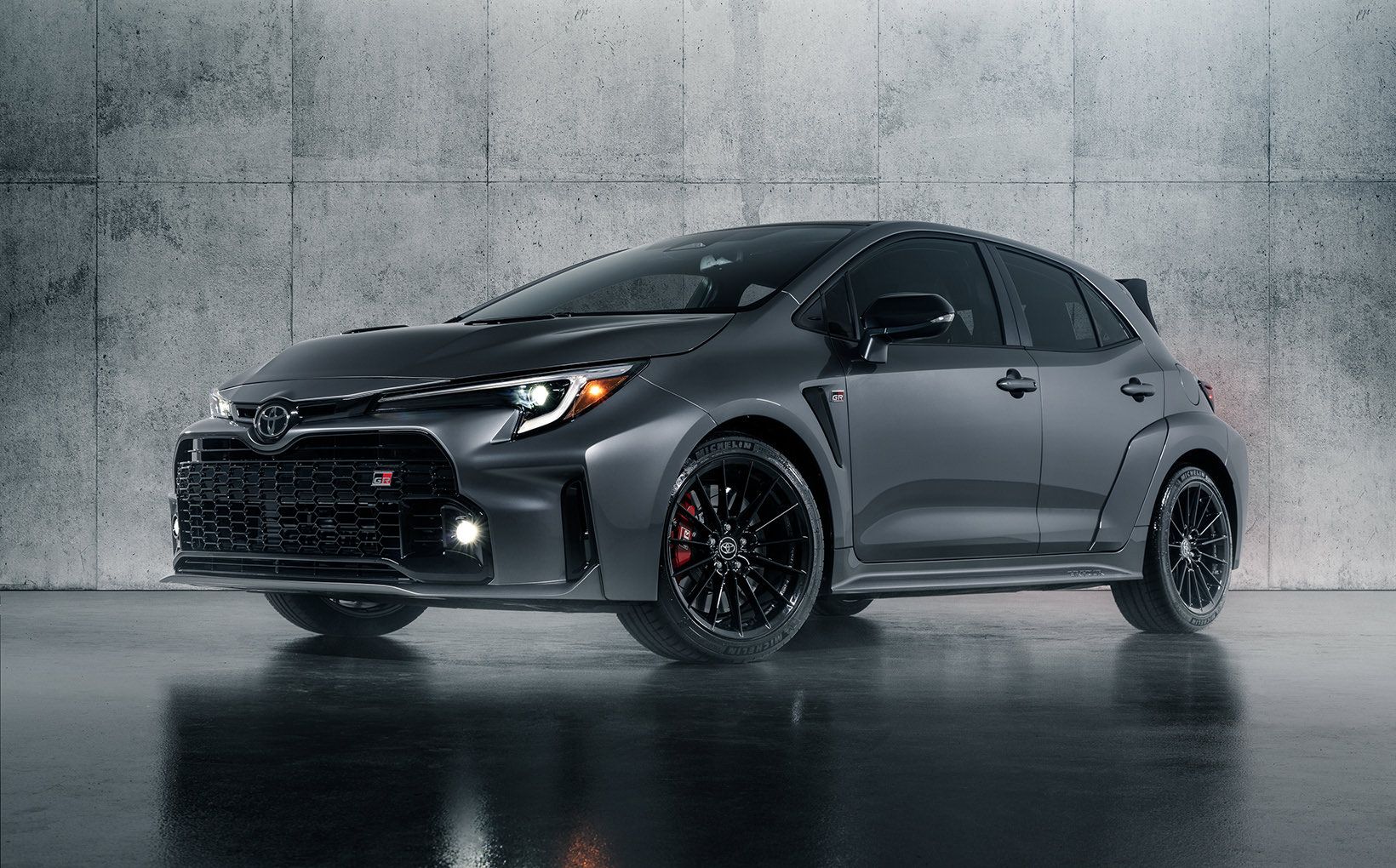 The GR Corolla uses much of the same driveline tech as the smaller GR Yaris.

Powered by a 1.6-litre three-cylinder turbo that’s based on (but not identical to) the GR Yaris’ powerplant, the GR Corolla produces 224kW at 6000rpm and 370Nm between 3000 and 5500rpm. That’s 24kW more power than offered by the Yaris, and while peak torque is the same, the Corolla produces that figure over a wider rpm range – the Yaris’ max torque tapers off from 4600rpm.

Some of that extra oomph may come down to faster-flowing plumbing on the exhaust side, with the GR Corolla sporting an unorthodox triple-tip exhaust arrangement that is claimed to reduce both exhaust backpressure and reduce noise when its bypass valve is set to Quiet mode. 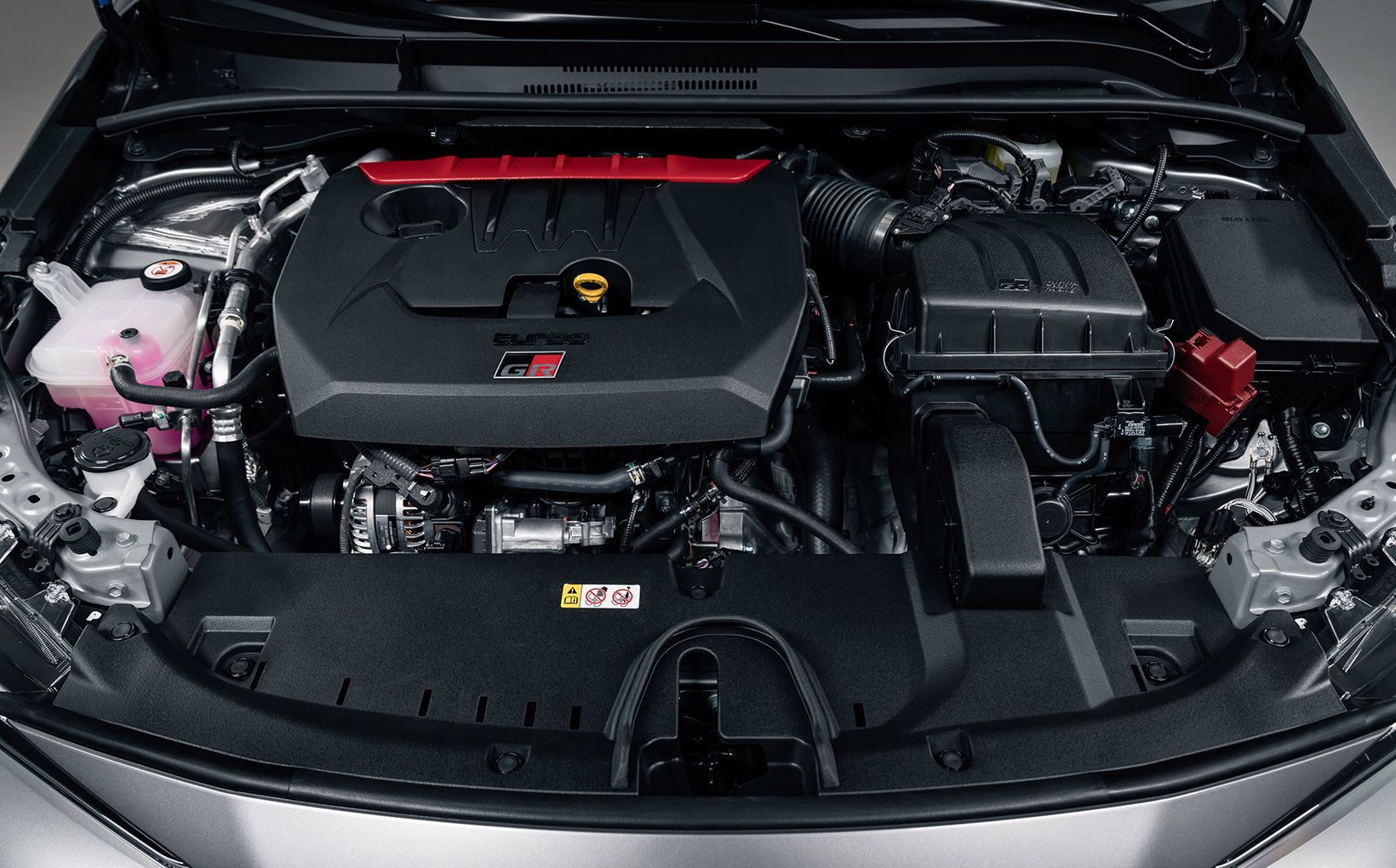 A six-speed manual is the only transmission choice for now, though it receives a short-stroke linkage to quicken gearchanges compared to regular manual-equipped Corollas.

Connected to the latest evolution of the GR-Four all-wheel drive system used by the Yaris, drive is taken to all four wheels with the front-to-rear torque split being varied by an electronic multi-plate clutch. However, unlike the Yaris, the GR Corolla divorces its torque bias settings from its other drive mode configurations, allowing throttle response and steering tune to be set independently of how much drive is being sent to the rear axle.

Torsen limited-slip differentials are equipped on both front and rear axles, and the car’s 18-inch cast alloy wheels are shod with Michelin Pilot Sport 4 tyres. 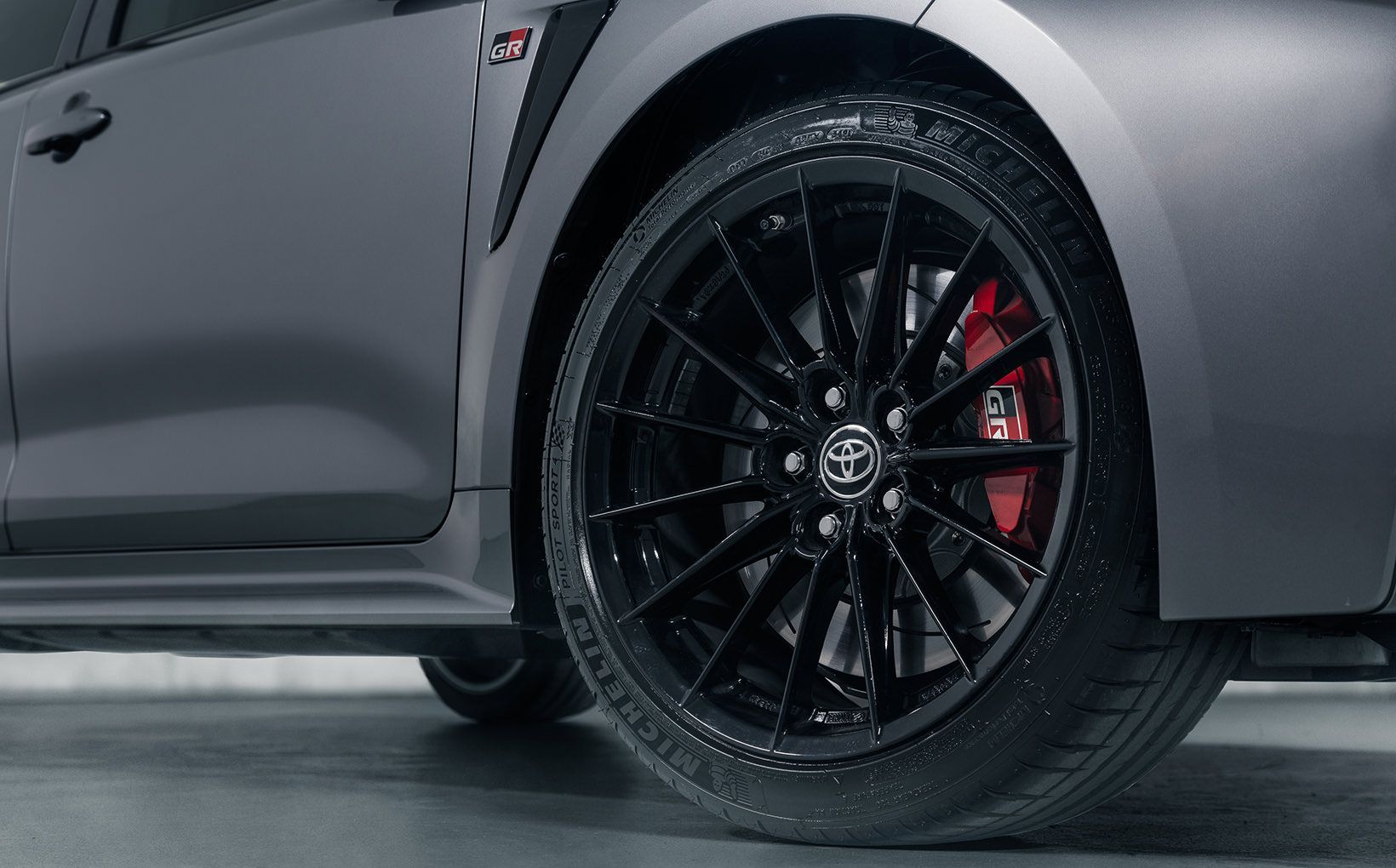 While the powertrain and drivetrain differ subtly between the two, suspension hardware and platform architecture are perhaps the greatest differentiators between the GR Yaris and the GR Corolla. The GR Corolla is entirely built on Toyota’s modular GA-C platform and offers a practical five-door, five-seat bodystyle, whereas the GR Yaris was a hybrid of the smaller GA-B front end and GA-C rear, and has a far more compact three-door, four-seat configuration.

Measuring 1850mm wide and 4410mm long, the GR Corolla is not only significantly larger than the Yaris, but also 60mm wider than a regular Corolla hatch thanks to its engorged bodywork.

Those wider fenders enable track width to be stretched by 60mm at the front and 85mm at the back, while more precise pillow-ball joints replace squishy rubber bushings for greater suspension accuracy and engage with uprated springs, performance-tuned shock absorbers and unique suspension geometry to enhance handling. 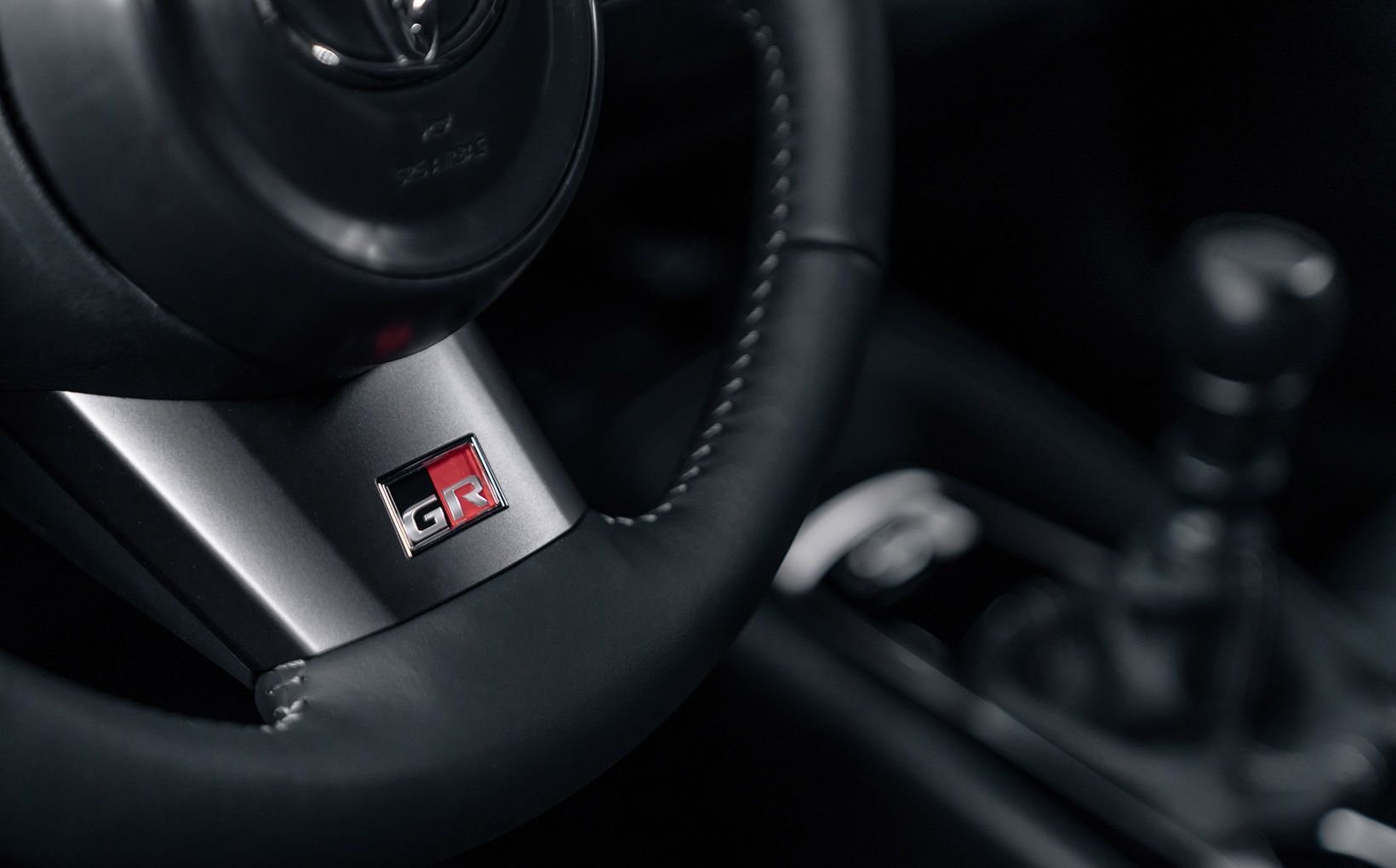 Sporting flourishes abound throughout the cabin, with GR logos aplenty.

The standard Corolla bodyshell also gets some extra help in the form of rigidity-boosting chassis reinforcements between the rear wheel wells, within the transmission tunnel and ahead of the fuel tank, providing the strength needed to harness the GR’s driven rear wheels and deliver better handling stability. The standard steel roof is also replaced by a carbon-fibre panel, reducing weight and increasing chassis rigidity further.

Keen drivers will appreciate the presence of a conventional manual handbrake, with Toyota even going as far as to specify in their press release the usefulness of that particular feature when drifting. Toyota is clearly keen to capitalise on the hoon demographic. 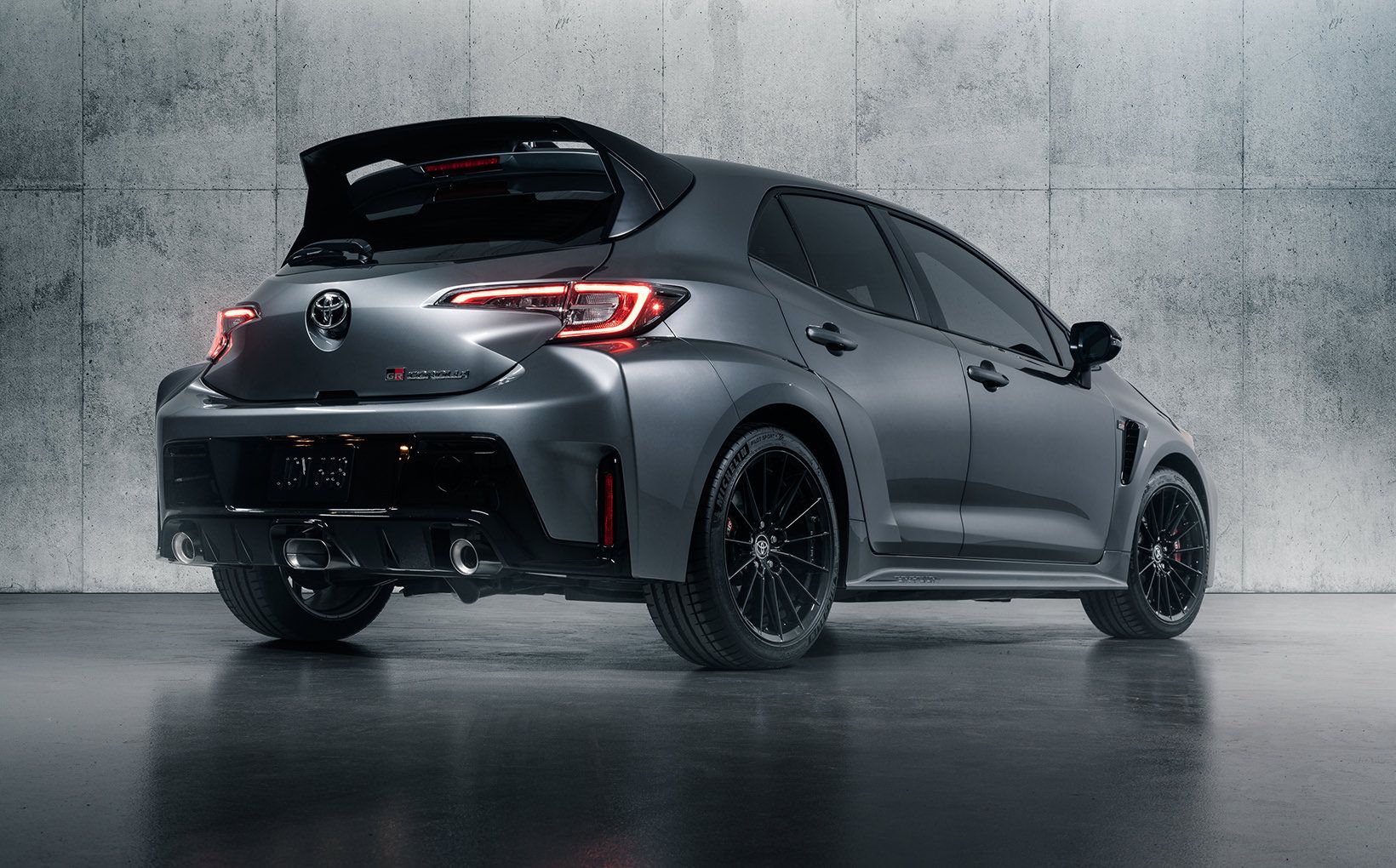 Pricing will be announced closer to the GR Corolla’s on-sale date later this year.

Australian sales are expected to begin sometime in the fourth quarter of this year, however Toyota Australia has yet to announce whether it plans to retail the GR Corolla via an online ordering system, as it initially did with the GR Yaris.

Pricing is also a mystery for now. With the GR Corolla’s Torsen differentials and Michelin tyres making it more akin to the $54,500 plus on-road costs GR Yaris Rallye rather than the entry-level $49,500 GR Yaris, a price tag in the high-$50K to mid-$60k realm seems realistic.

With the Mk8 Volkswagen Golf R offered at $66,990 before on-roads, it’s not unreasonable to expect Toyota’s first all-paw five-door performer to land somewhere near that figure.