The next Nissan Z car is on its way, albeit slowly, as teased by the new Z Proto

We say ‘almost’ because it is taking its sweet time and Nissan still hasn’t released anything concrete about the new Z apart from the fact it will have a twin-turbocharged 3.0-litre V6 pinched from Infiniti paired to a six-speed manual transmission.

Even the design has a few question marks hovering about because again, Nissan has not actually revealed the finished product, rather a very well evolved prototype.

That prototype is the Z Proto, a stylish, very yellow nod both to the past and future of the iconic Z lineage. 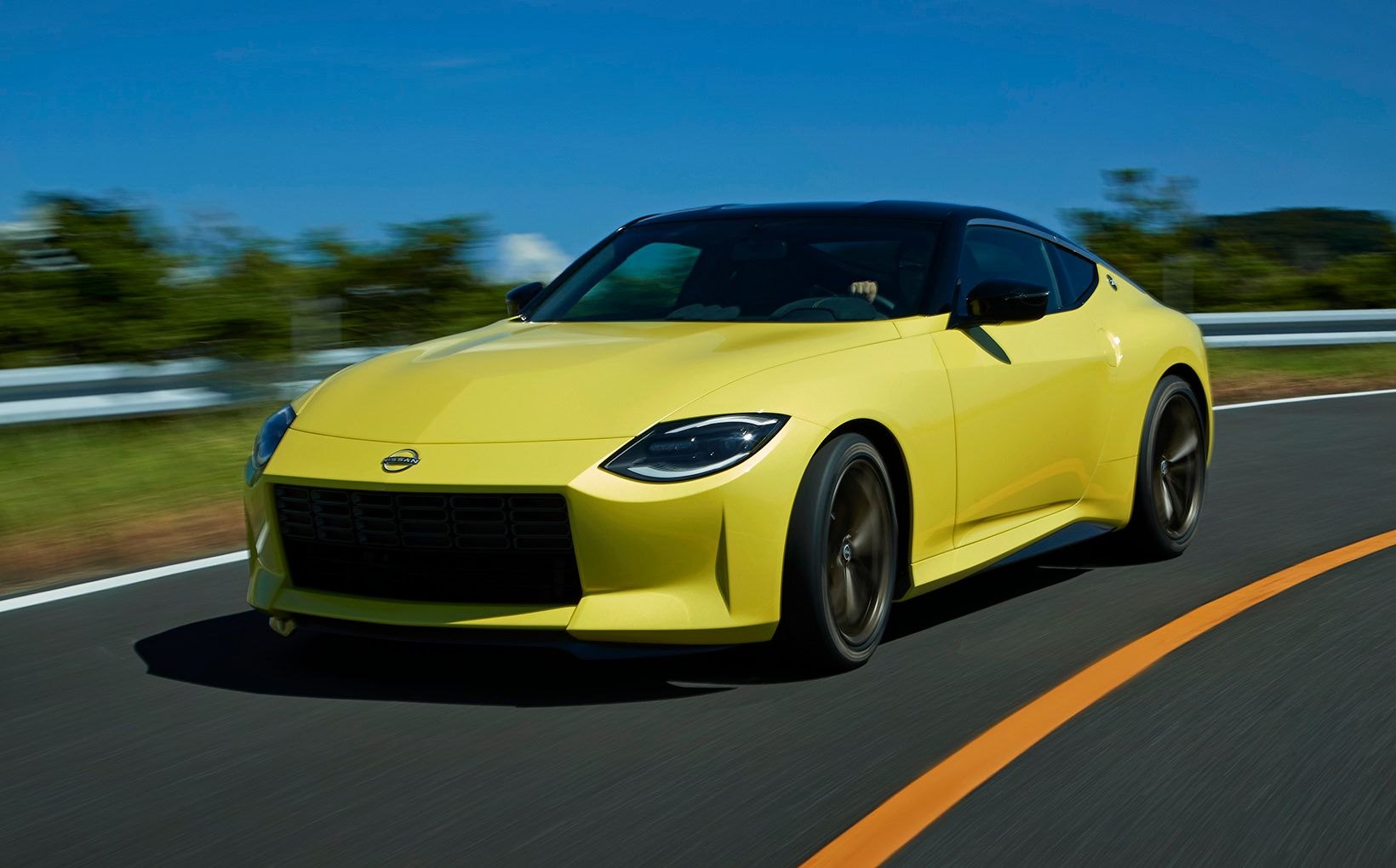 The Z Proto is our first taster of the next Z car’s styling.

Brandishing some of the classic styling cues from the original 240Z as well as some of the signature traits of the fan-favourite Z32 300ZX and present 370Z, the Z Proto is the result of countless studies and sketches carried out by designers.

“Ultimately, we decided the Z Proto should travel between the decades, including the future,” Nissan head of design Alfonso Albaisa said.

The overall silhouette is the classic cab-back arrangement as seen on all Z cars to date; the teardrop-shaped headlights, pointed nose and bright yellow pearlescent paint can all be seen on the original 240Z while the gaping rectangular intake has been lifted off the recent 350Z and subsequent 370Z. 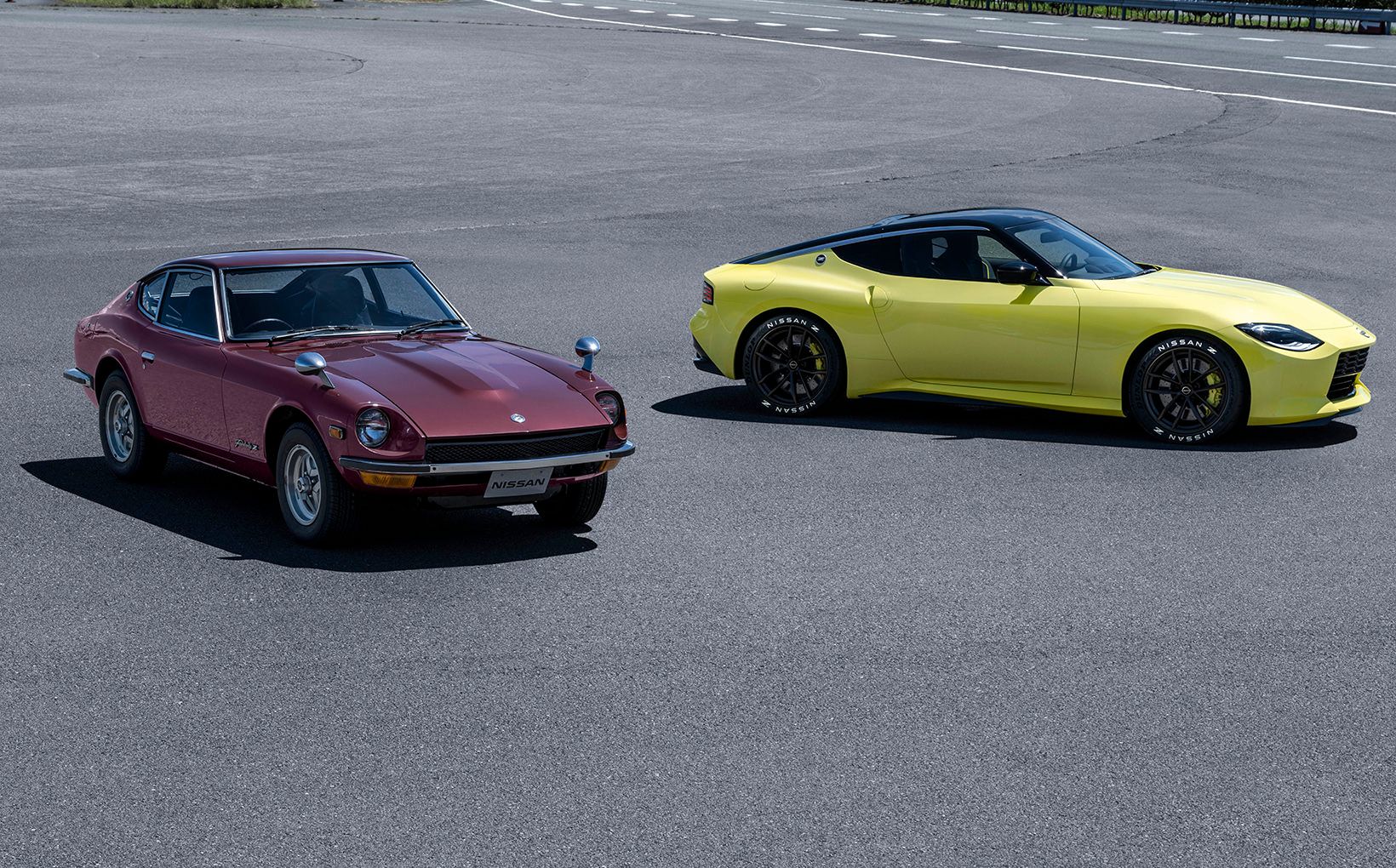 Special emphasis was placed on the silhouette with Nissan saying the link to the original Z is at its most obvious with the flowing roofline cut off squarely at the rear with the bootline sitting slightly lower than the bonnet line, recreating the original car’s “unique posture”.

“The silhouette is so important … we wanted this long bonnet and this slid-back cabin,” Mr Albaisa said.

“We wanted to make sure that the rear end of the car is lower than the hood of the car, which we feel if you really analyse the 240, is emblematic of this car.” 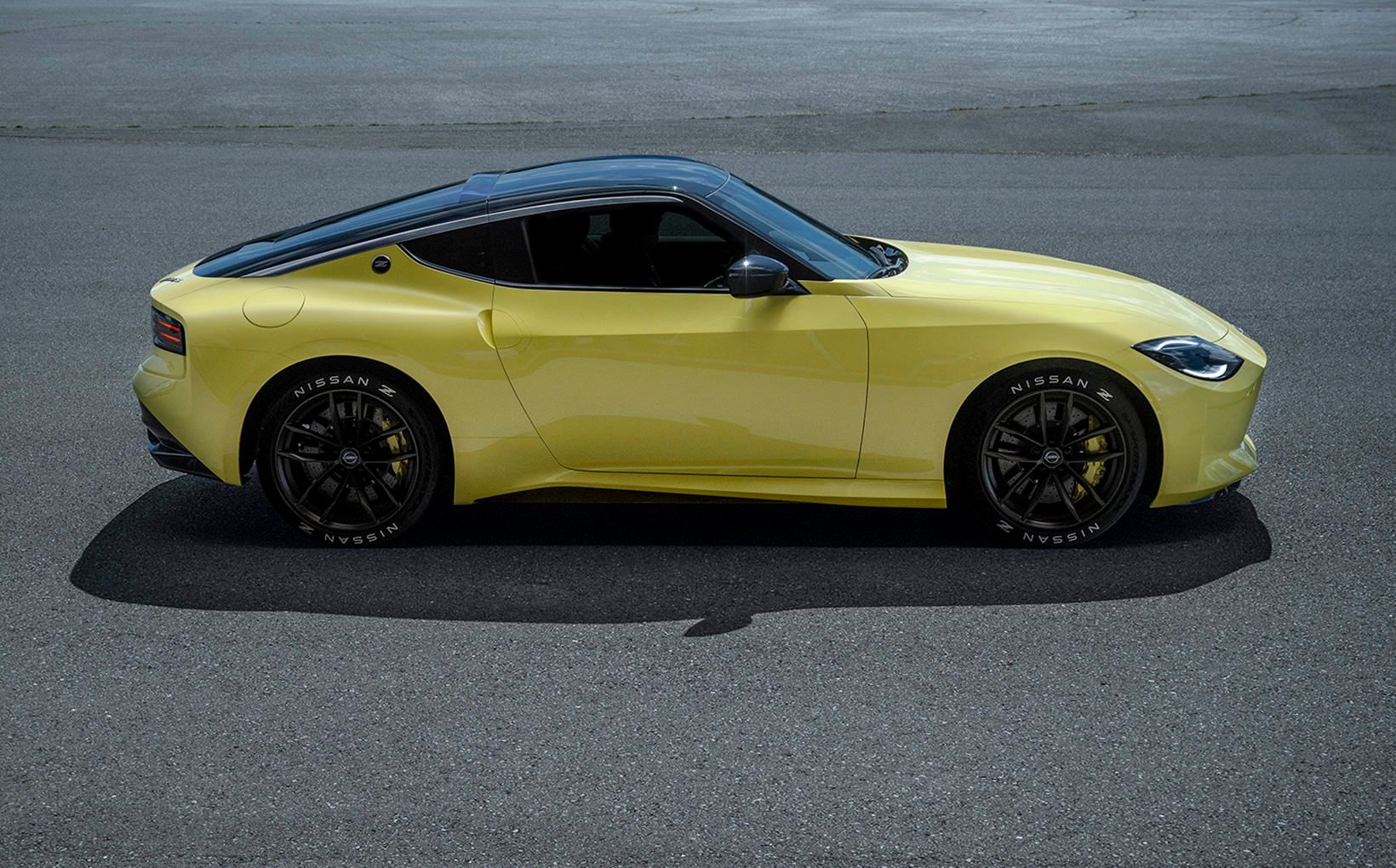 Maintaining the classic cab-back style was imperative for designers.

The horizontal tail-lights were directly inspired by the 300ZX, the pointed nose and subtle splitter are two more features inspired by the original while the curvaceous hip lip takes its cues from the 370Z and adds an extra sense of muscularity.

The rear bumper meanwhile is dominated by a new carbon-fibre diffuser from which protrude a pair of silver exhaust tips, another styling cue first seen on the 350Z back in the early 2000s.

A similar design philosophy has been adopted within the cabin too with the interior designed to “fit the driver and passenger like a glove” and to be as minimalistic as possible. 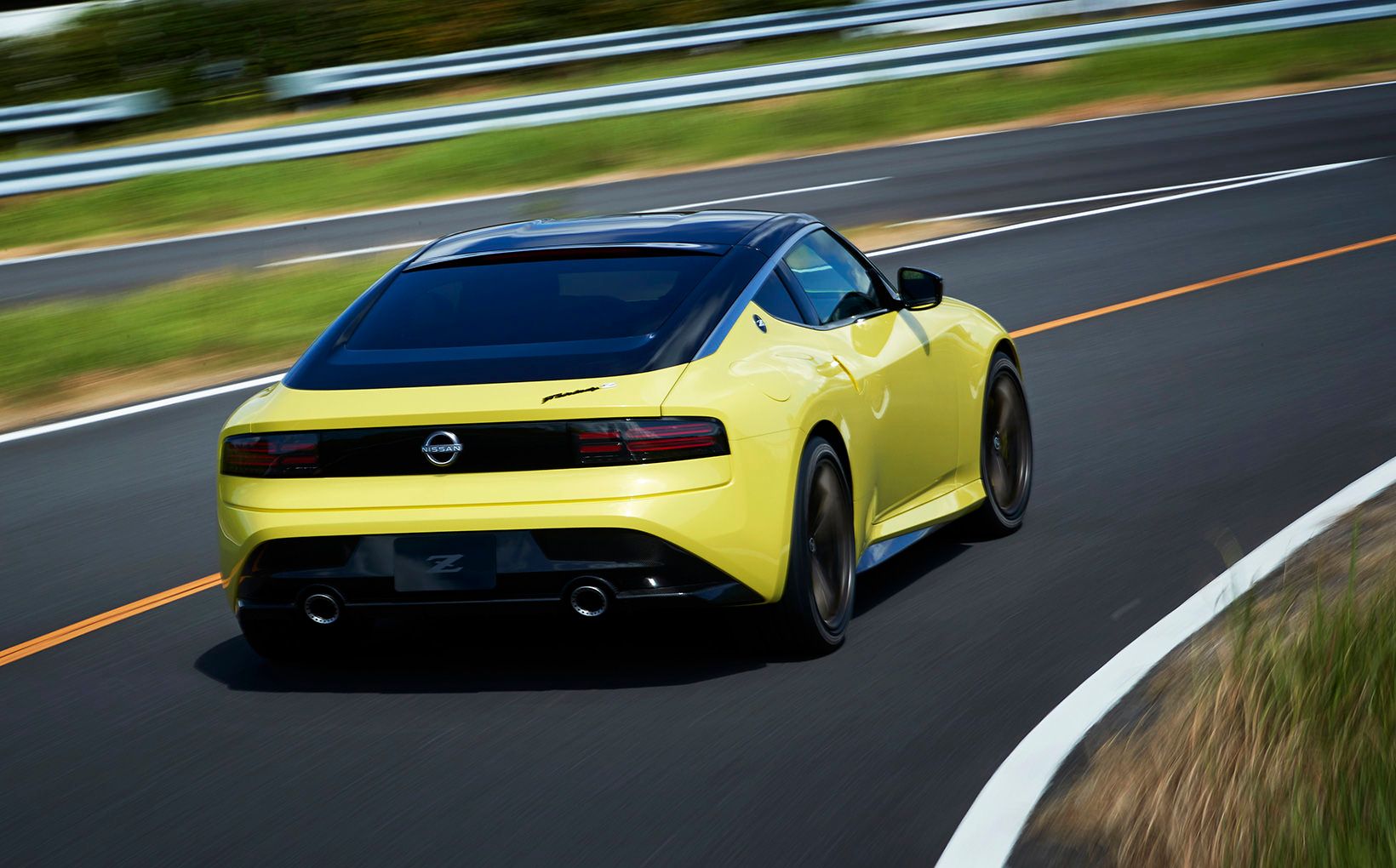 The tail-lights have been lifted almost straight off the Z32 300ZX.

Devoid of any great number of buttons and switches, the majority of functions are controlled via a large, centrally mounted touchscreen infotainment system on the dash however Nissan does not quote a specific diameter.

Another sign of designers looking to the future though comes in the form of the 12.3-inch all-digital instrument cluster which has been arranged specifically to display all key driving information – for both road and track use – to the driver “at a glance”.

Fittingly for a sportscar, the tacho is the star of the show with the red-line shift point being tactically placed at the 12 o’clock position while a boost gauge lays to the left. 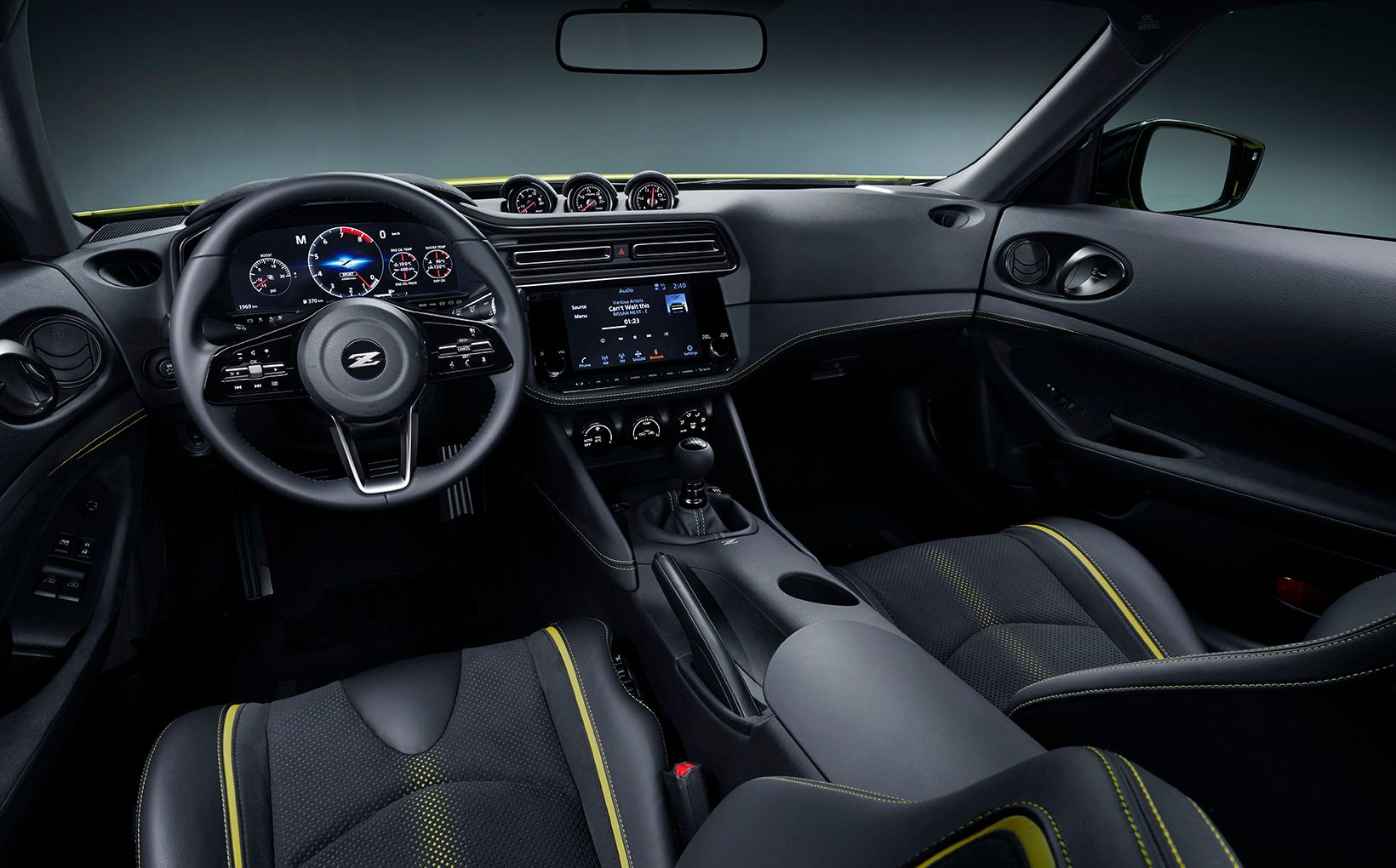 Like the exterior, the cabin blends a classically-inspired design with modern touches.

On the right are oil pressure and temperature gauges along with the water and differential oil temperatures while speed is catered for by a conservatively sized readout above and to the right of the tacho.

In another dash of tradition, three auxiliary gauges – boost pressure, turbo speed and a voltmeter – adorn the top of the dash.

As for the engine itself, as previously mentioned we know it will be a force-fed 3.0-litre V6 developing an as-yet-unreleased amount of power, all of which will be sent to the rear wheels via the classic three-pedal stick-shifter set-up. 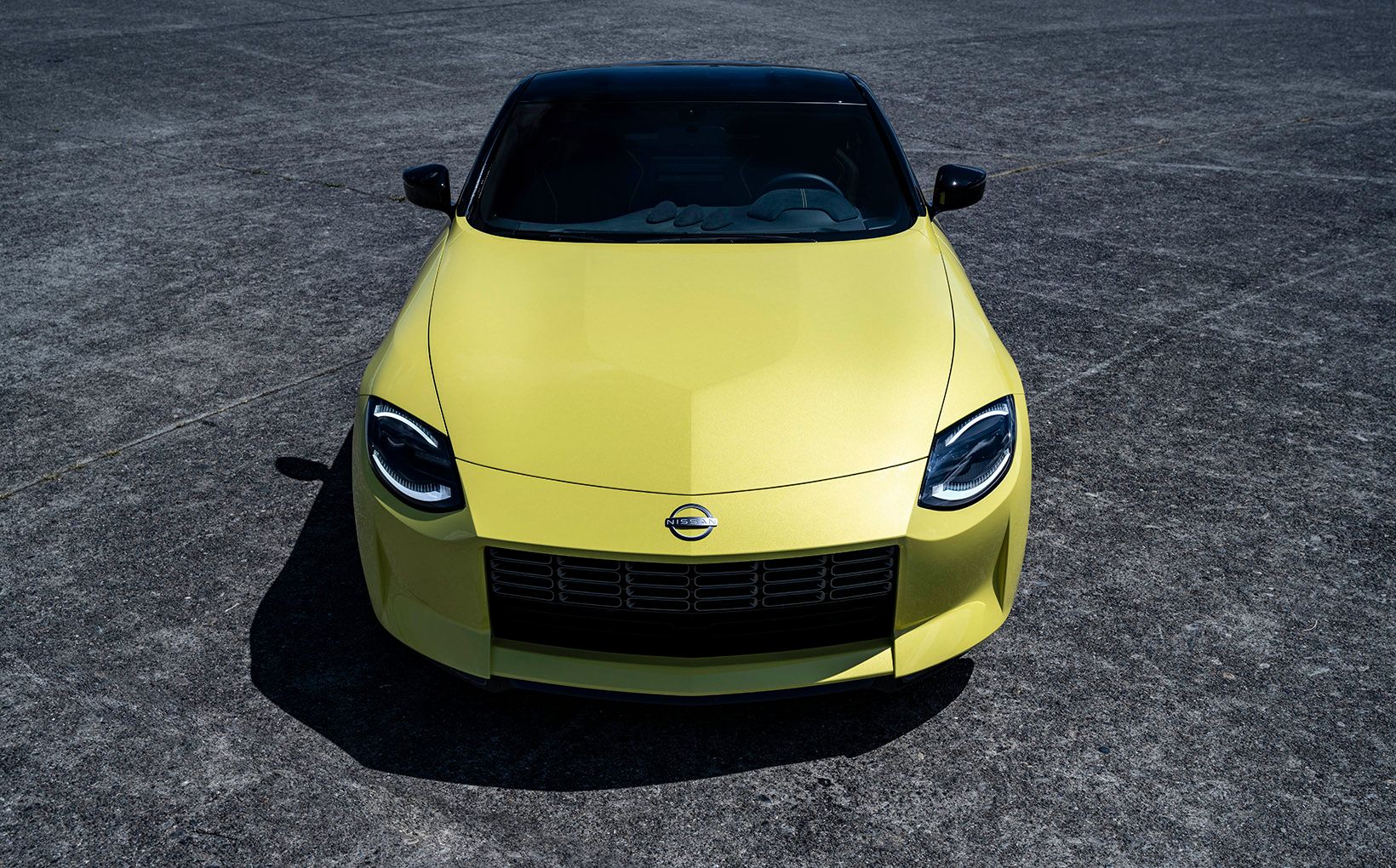 Only once before has the Z lineage featured twin-turbocharging.

Regardless of how much power the finished product ends up making, the next Z will face stiff competition from the soon-to-be-enhanced Toyota Supra which currently churns out 250kW/500Nm.

“The Z has always been a strong dynamic performer, making it easy for customers to enjoy its capabilities and feel as connected as possible to the car,” Z Proto chief product specialist Hiroshi Tamura said.

“This has been true through all its generations, and this is what drives our passion to innovate and challenge the norm.” 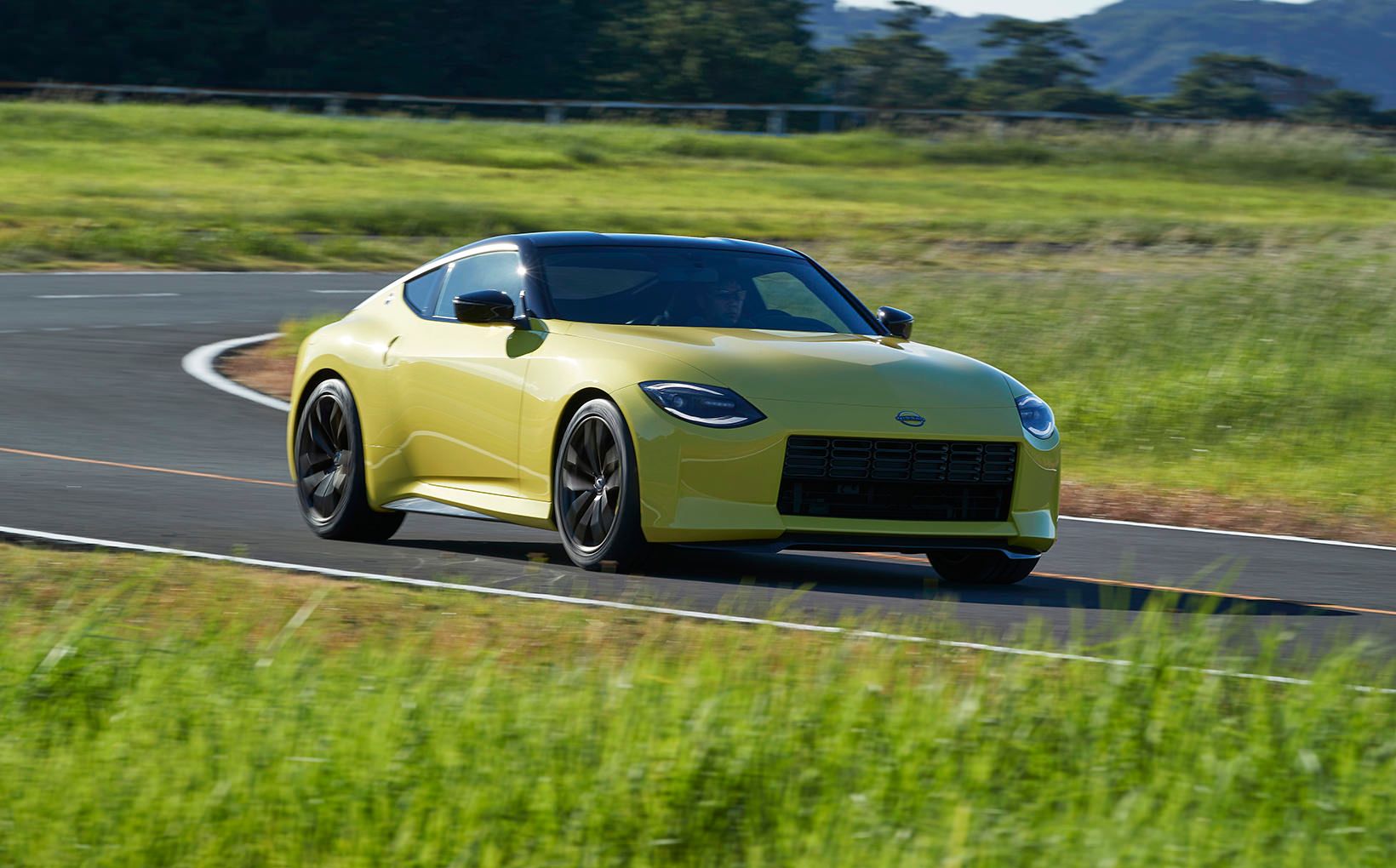 Regardless of name, design features or engines, the world needs more sportscars.

While an exact timeline is still shrouded in mystery, one thing is for certain about the new Z – it will be adding another contender to the disappointingly small mainstream sportscar market, and that can only be a good thing.