JUST like the sleek, stainless steel bodied DeLorean DMC-12 from 1985, the latest iteration of a DeLorean sports coupe, called Alpha5, is an attention grabber par excellence right down to its signature gull wing doors and sweeping fast back silhouette.

In a head nod to the original, it even comes with a metallic exterior finish or a rich burgundy red for the special launch edition.

John DeLorean would surely approve of the Alpha5 if he was alive today and being the consummate automotive engineer would also have approved of the Alpha5’s all-electric powertrain.

Further, if he was able to jump in the Alpha5 for some wheel time, he would have revelled in the available performance rated at supercar level… in near complete silence.

Added to that is the fact that Alpha5 is a singular design that channels some of the most beautiful supercars currently available, notably Jaguar’s F-Type (at the rear) and concept cars from makers like Audi in profile and around the frontal area. 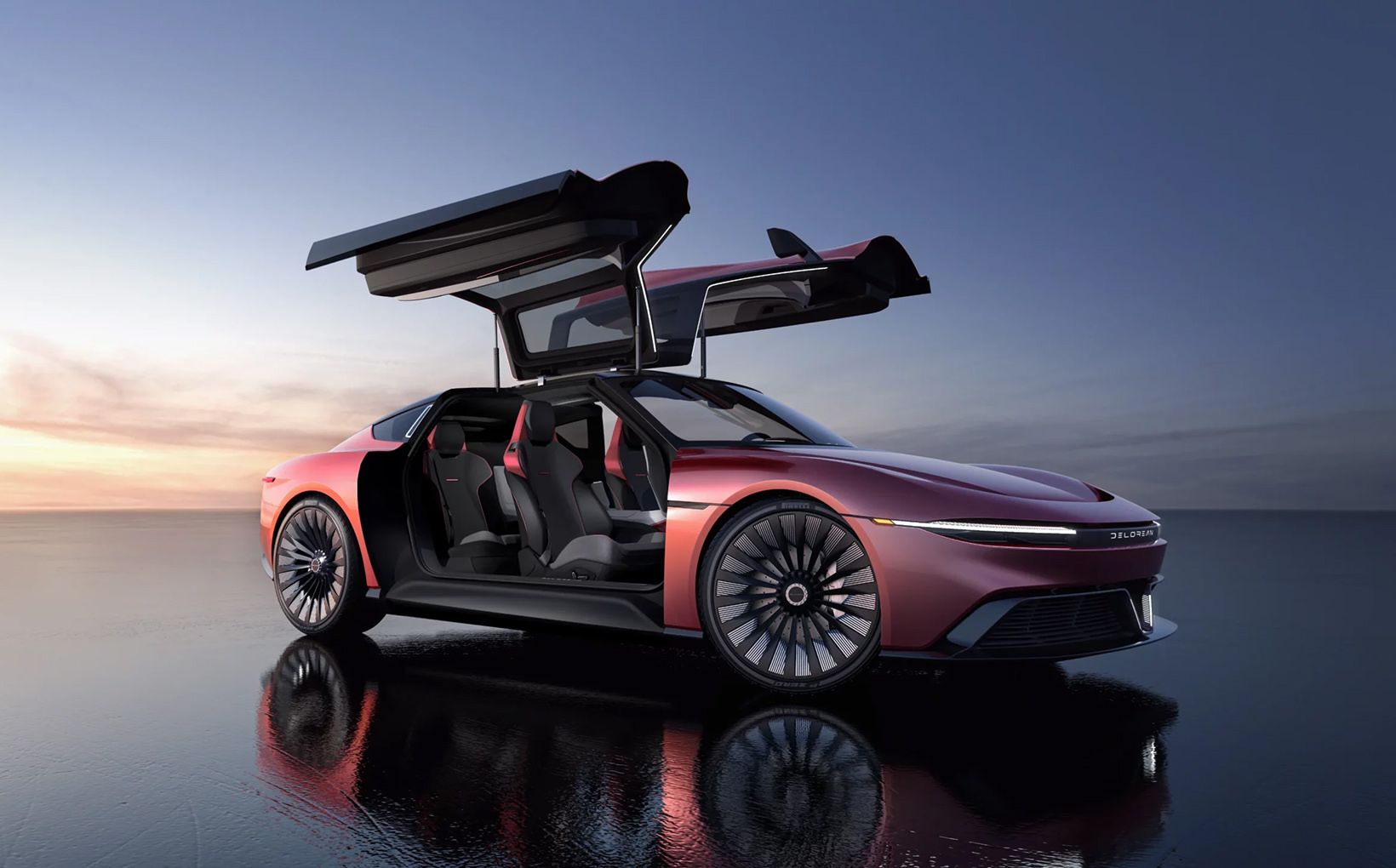 The Italdesign styling is a 21st century update of the original DeLorean retaining signature gullwing doors.

All that Back to the Future stuff aside, when you boil it all down, the new DeLorean deserves to succeed in the new millennium plagued by copy-cat cars with no soul.

This puppy certainly has soul, make no mistake.

DeLorean is keeping their cards close to their chest as to powertrain specifics suffice to say “adequate” power and torque is on tap commensurate with a sports car such as this.

Again, with scant details available as to Alpha5’s specs it would be naive to think it wasn’t equipped with the latest fast charging system along with possibly multiple electric drive motors, likely in each wheel.

DeLorean says the base performance model can be charged at home or via a public high-speed charger, its 100kWh battery pack providing up to 480km range, an estimated top speed of 250km/h and that 0-100km/h time of 2.9 seconds.

DeLorean CEO Joost de Vries says “The Alpha5 is for people that love to drive.” 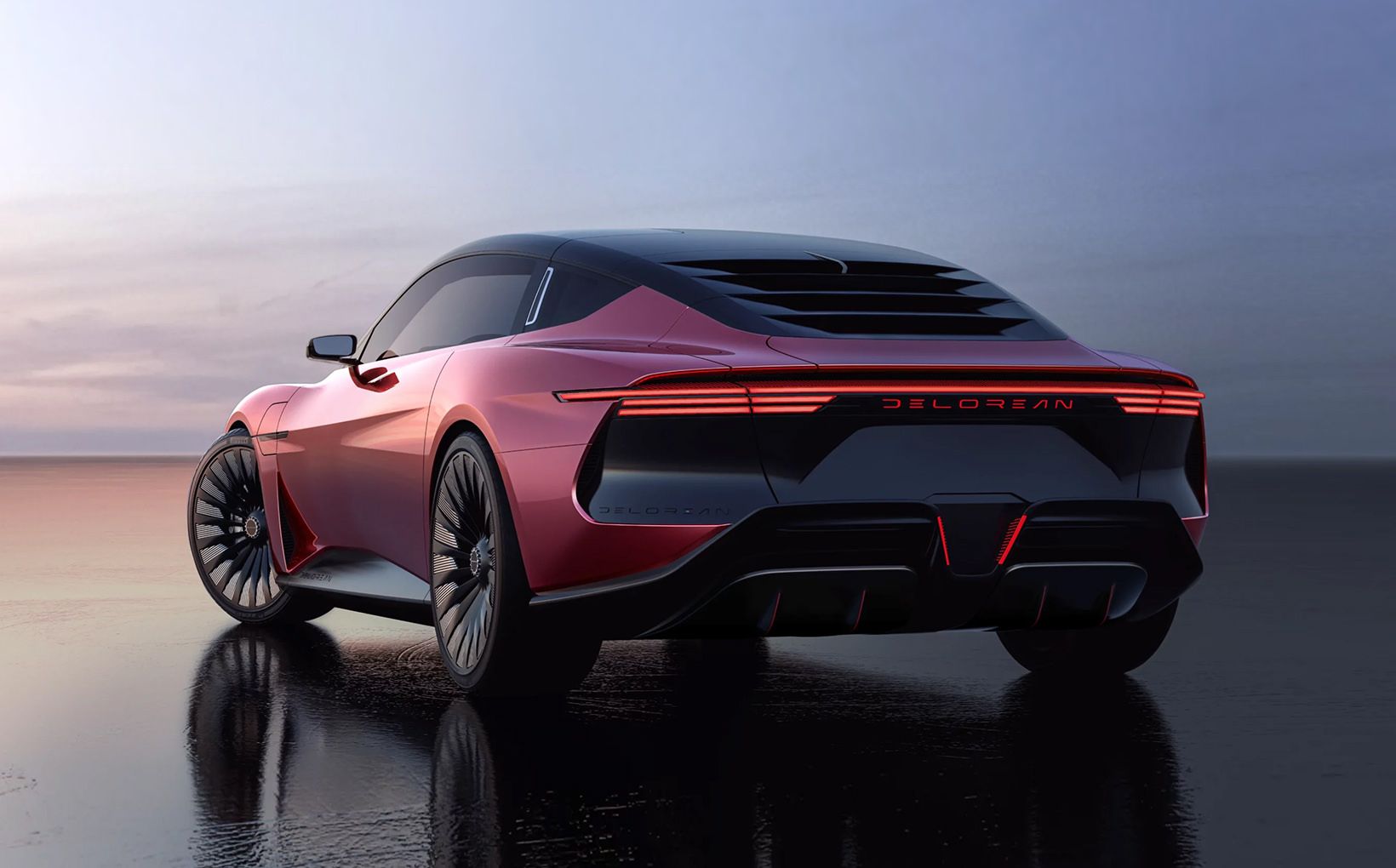 Alpha5 has an excellent pedigree coming from legendary design house ItalDesign – responsible for the original DMC-12.

In styling terms, the Alpha5 features elements of the 1985 original including horizontal-styled LED headlights and taillights, turbine style alloy wheels, gullwing outlines in the lower grille and rear valance, a louvre rear window cover and DeLorean badging stamped into the rear bumper.

The aerodynamically efficient Alpha5 cuts a low drag coefficient of a mere 0.23. DeLorean says the Alpha5 is based on a new chassis structure with an ultra-strong and light weight carbon-fibre tub. They hint at other models, namely the Alpha1, Alpha2, Alpha3 and Alpha4, on a newly launched microsite. There’s even mention of an SUV.

Inside is a study in minimalist Euro-chic offering room for the driver and three passengers in a compact arrangement. Four individual bucket seats are provided upholstered in a stylish but impractical white textile. The minimalist cockpit features a digital instrument cluster, floating touchscreen infotainment array, separate climate control panel and two-tier floating console. 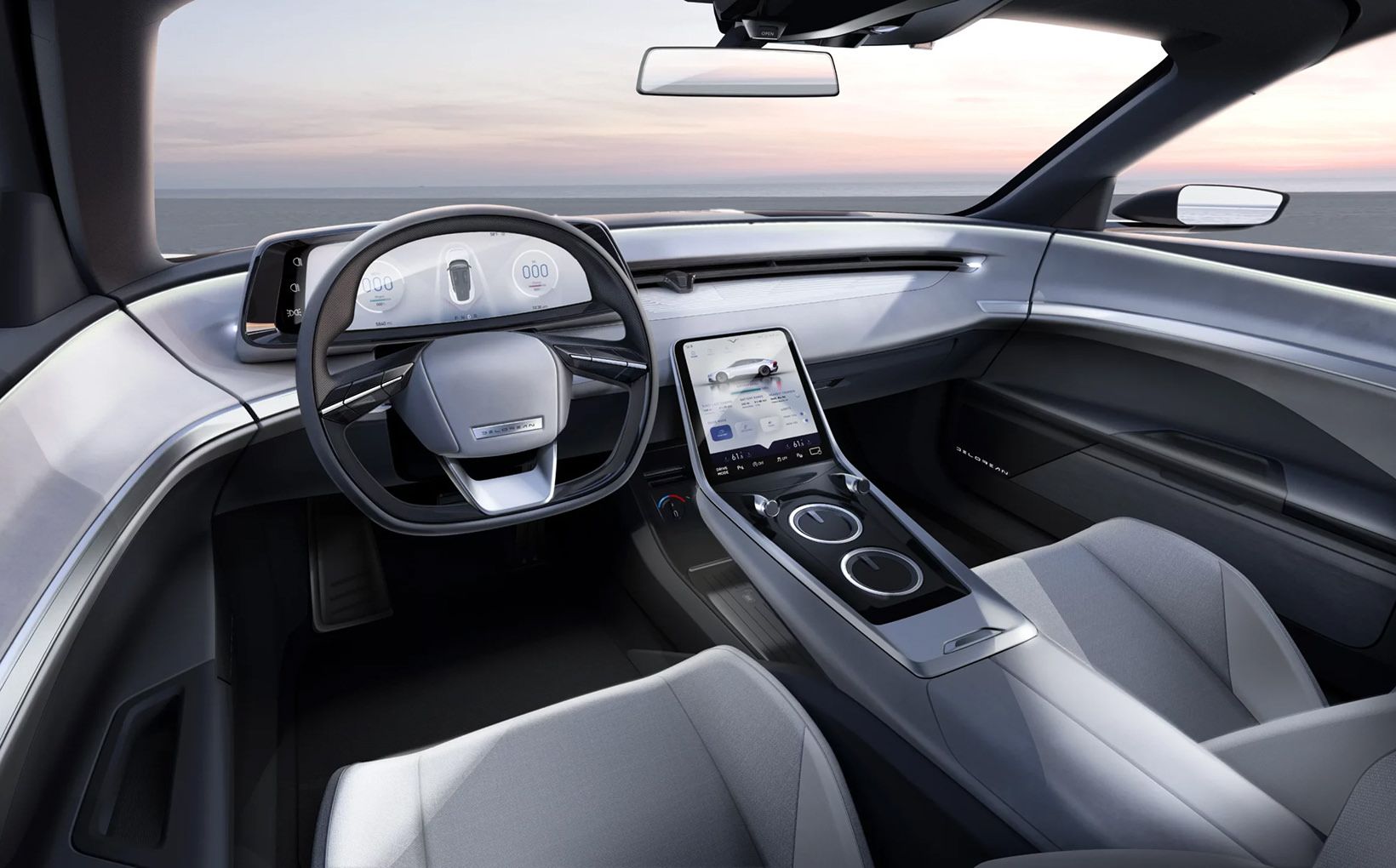 DeLorean Marketing boss Troy Beetz said “There was this enormous responsibility to make sure we honoured the history of the DeLorean brand, but an even greater responsibility in curating its future. I think we did both with the Alpha5.”

DeLorean says the Alpha5 will be produced in Italy with driveline components sourced from the UK.

Guaranteeing exclusivity is the production run of only 88 units, or approximately 8900 fewer than DMC-12’s total production number.

DeLorean points out that an electric sedan and a hydrogen-powered SUV are planned.

“We have been given the opportunity to reimagine a brand that has meant so much to so many people from all corners of the globe, for four decades,” said DeLorean vice president of brand and creative, Neilo Harris.

“DeLorean has touched so many lives and set the stage for so many memories. We are all now witnessing a new chapter of this amazing story.” 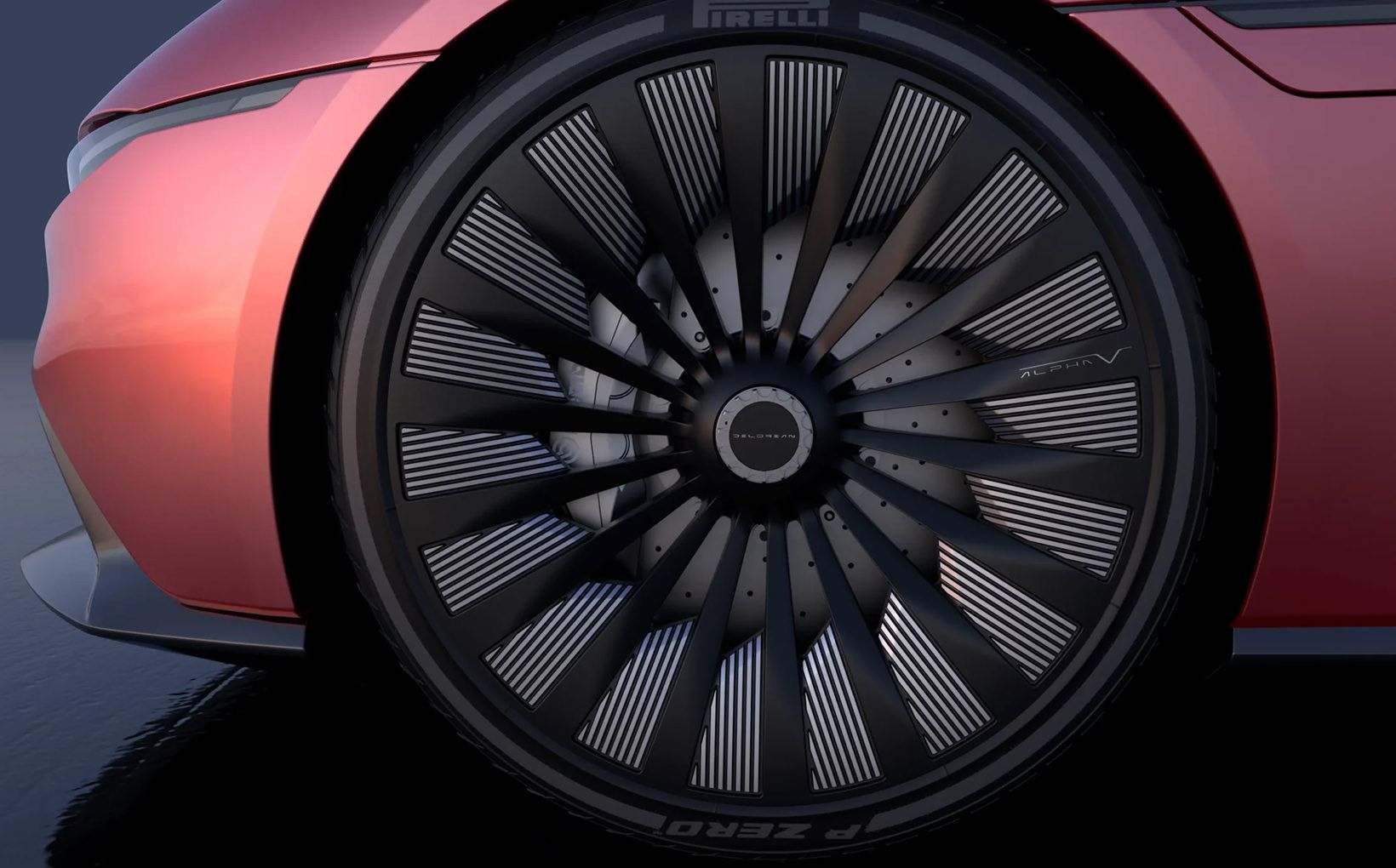 The Alpha5 was designed with a 100-kilowatt-hour battery pack, up to 450km range.

The Alpha5 prototype comes nearly 40 years after production ended on the original DeLorean in December 1982. In 2015, it was estimated that approximately 6,500 original DeLorean vehicles were still on the road.

The DeLorean Motor Company (DMC) was launched in 1975 by John DeLorean, a star at General Motors for his work at Pontiac, and closed its doors after a tumultuous run in 1982. The company only produced one model, the stainless steel-bodied, gullwing-doored DMC-12, and only 9,000 of them.

But the car refuses to die, especially after appearing in the Back to the Future movie franchise (complete with flux capacitor, of course), and the brand is now being revived with the all-electric Alpha5.

There have been several DMC-12s retrofitted with electric power, but the 2+2 four-seater Alpha5 is an all-new vehicle with smartly updated styling. 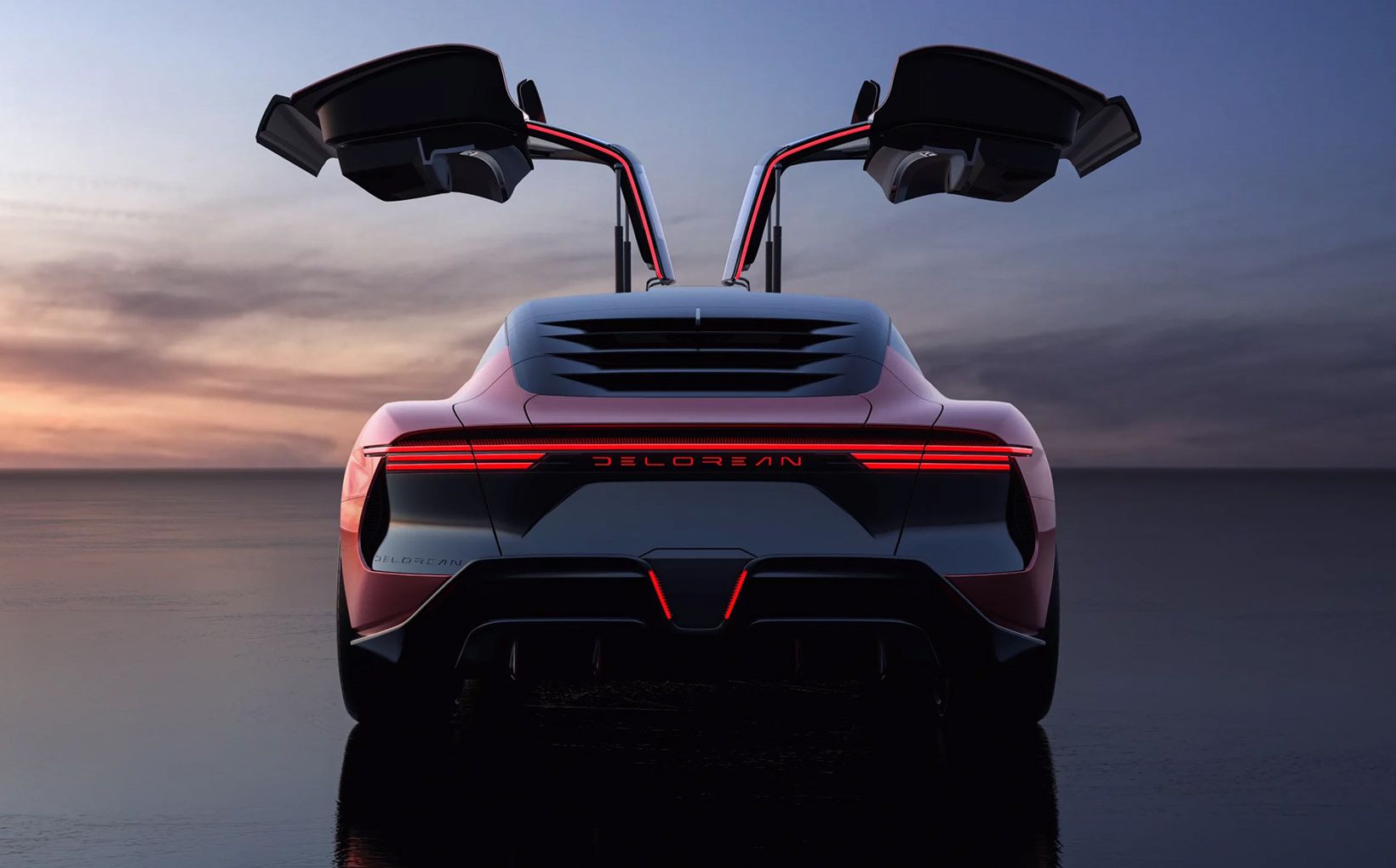 The Alpha5 has the classic gull-wing doors, louvered rear window, and three-layer taillights.

DMC is now based in San Antonio, Texas, and will locate its production plant there. Liverpool-born Stephen Wynne acquired the parts inventory and rights to the DMC name in 1995. He began selling parts (and still does), but also worked on electric conversions.

The DeLorean Alpha5 Launch Edition will make its official public debut on August 21 at the Pebble Beach Concours d’Elegance.

Now, if all goes well, DMC will have a second lease on life—and a second chance to get it right.