Porsche debuts its new-generation 911 GT3, and it means business

ONCE described by Richard Hammond as the “ultimate version of the world’s ultimate supercar”, the Porsche 911 GT3 has long been one of the performance and engineering pinnacles of the motoring world.

Whereas the ballistic Turbo and Turbo S are all about mixing brute force with day-to-day usability, the GT3 is aimed squarely at those who want a rawer, more engaging and focused driving experience, especially on the track, and Porsche has just debuted the latest 992 version.

Due to arrive in Australia in the second half of the year, the new GT3 will be the most track-capable and, in theory at least, the most focused vehicle within its current portfolio, that is until the 922 GT3 RS emerges. 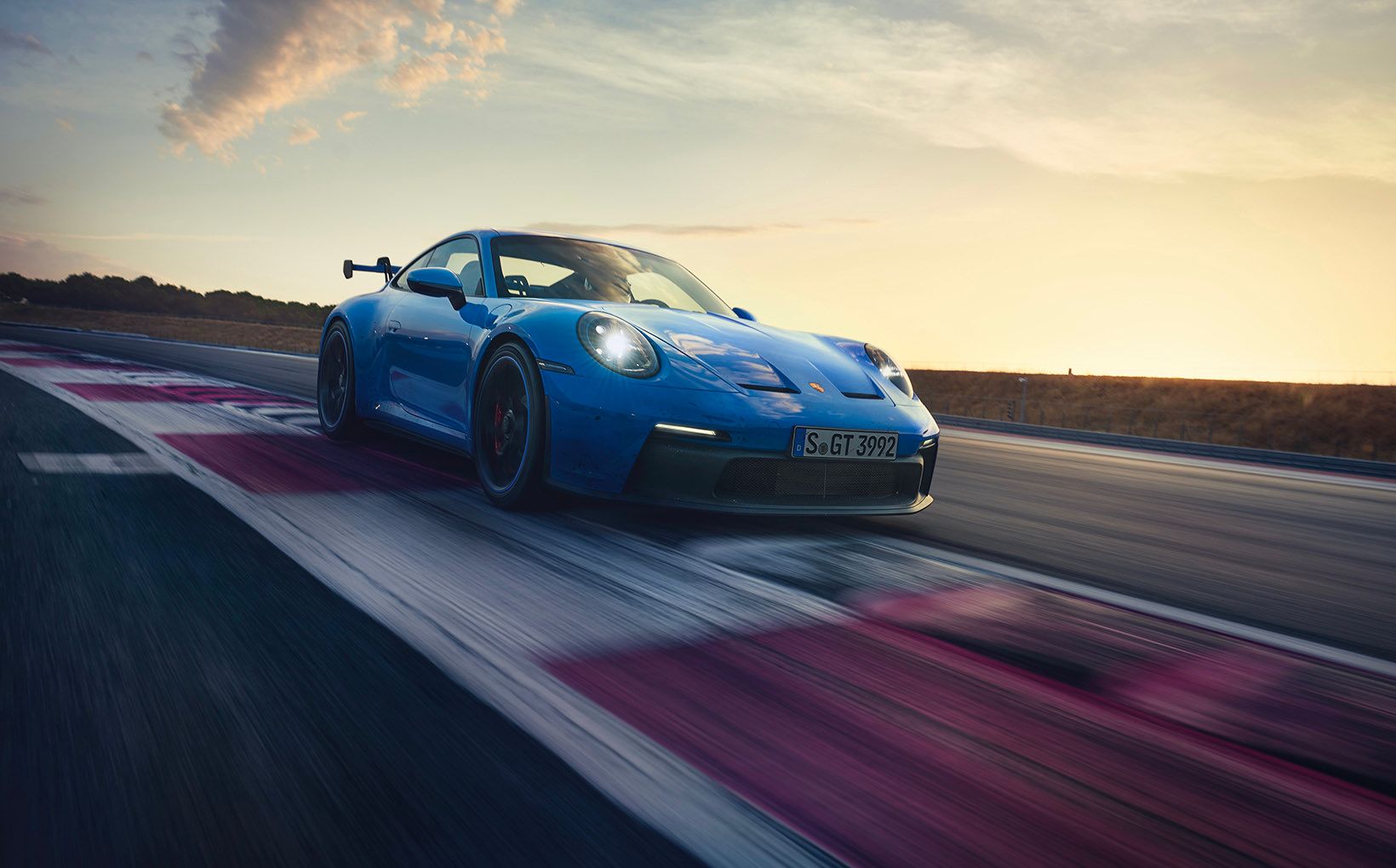 The GT3 is one of the pinnacles of 911 performance.

For the unfamiliar, the 911 GT3 is cooked up using a reasonably simple recipe: take a normal 911 and lighten it, add more power courtesy of a free-revving naturally aspirated engine and then extensively upgrade the chassis and underpinnings.

The star of the GT3 show has long been its rev-happy powerplant and that trend looks set to continue.

Just like the old model, the 992-generation GT3 is powered by a 4.0-litre naturally aspirated flat six which develops 375kW at a dizzying 8400rpm and 470Nm at 6100rpm with drive sent exclusively to the rear wheels via either a six-speed manual or seven-speed PDK dual-clutch automatic transmission. 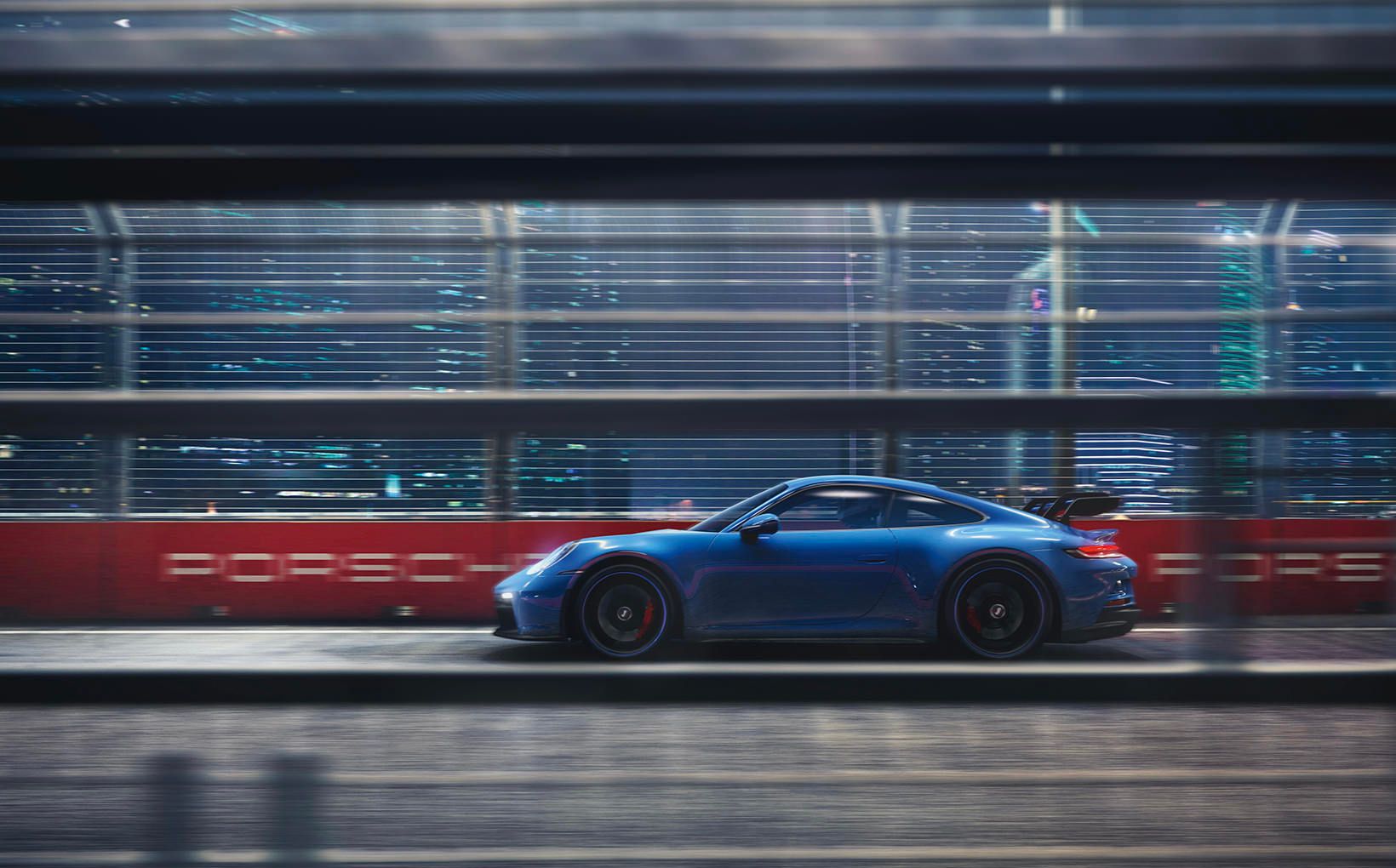 Developed to be as capable on the track and still usable on the road, the GT3 is all about old-school lightness and that flax six engine.

While down on the current Turbo and Turbo S, those outputs are up 7kW/10Nm over the previous GT3 and just 8kW shy of the last GT3 RS.

Somewhat predictably, the manual is slower off the mark and to the double tonne but its top speed is marginally higher at 320km/h. 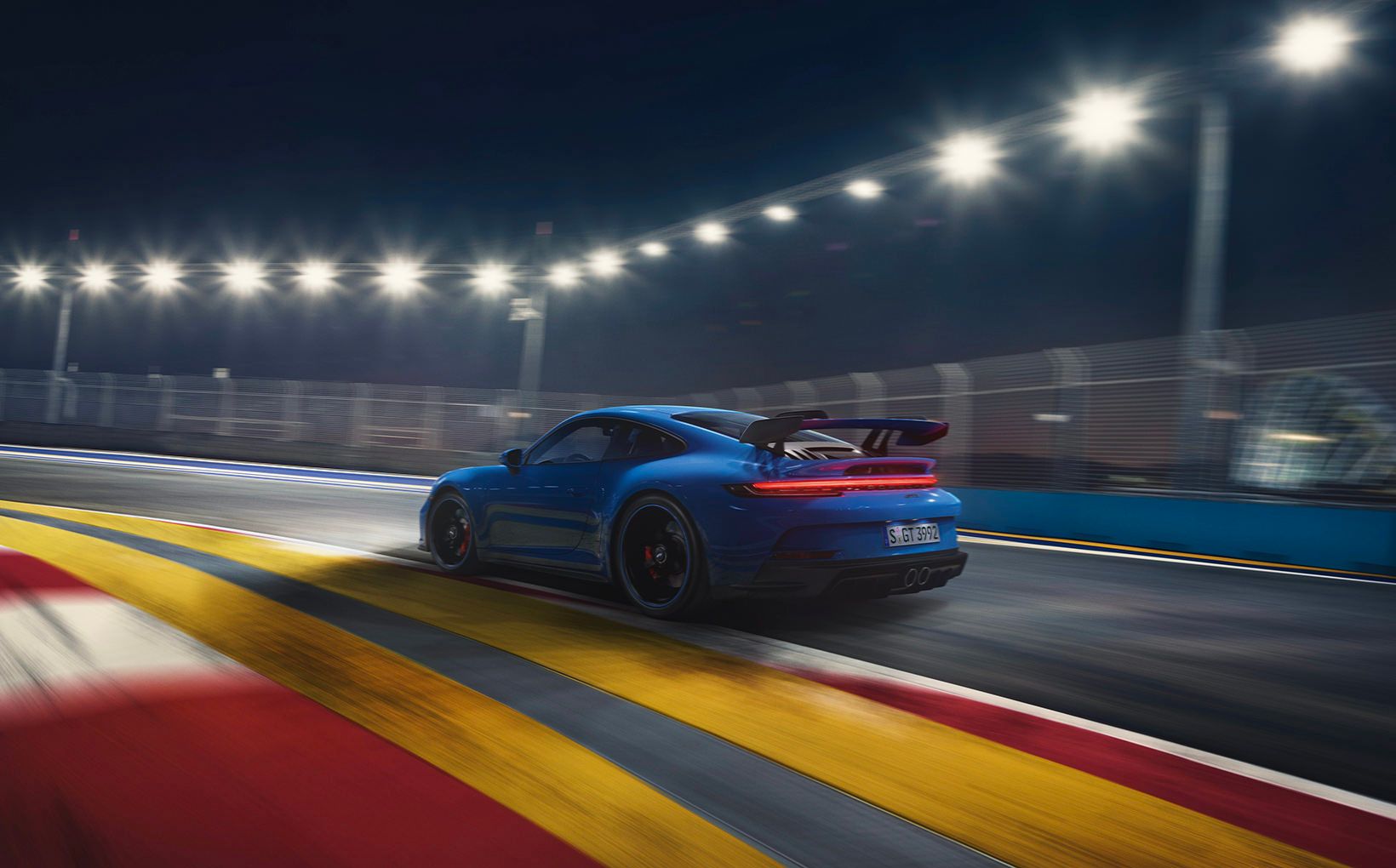 It’s fast, but its specialty is corners.

Weighing in at just over 1410kg, the GT3 is a definite lightweight among its other 992 stablemates and comes armed with some of the most aggressive aero features you’re likely to see on a road car… as standard at least.

More than just for show, all of the almost countless aero features do their part in keeping this juiced-up 911 anchored to the tarmac, aided though the bends by a locking mechanical differential on the rear axle and advanced torque vectoring system. 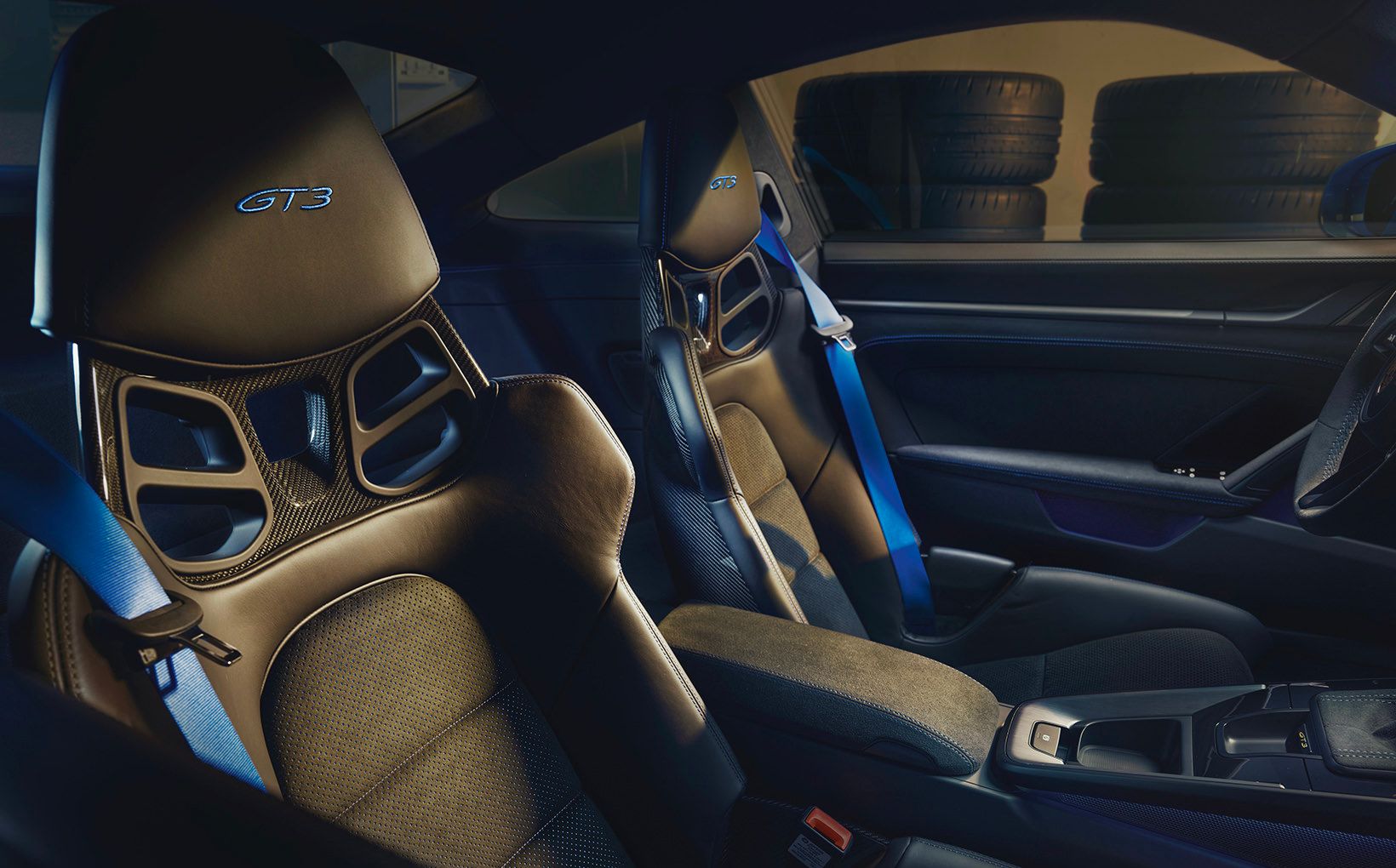 Thanks to the aggressive aero and track-derived underpinnings, the GT3 has spades of mechanical grip.

Being light is one thing but having a dialled suspension set-up is another and in classic Porsche style, the GT3 delivers exactly that, riding on a double-wishbone set-up up front with a multi-link arrangement at the rear, not to mention the adjustable Porsche Active Suspension Management system fitted as standard.

When all is said and done, the GT3 rides 20mm lower than a standard Carrera. 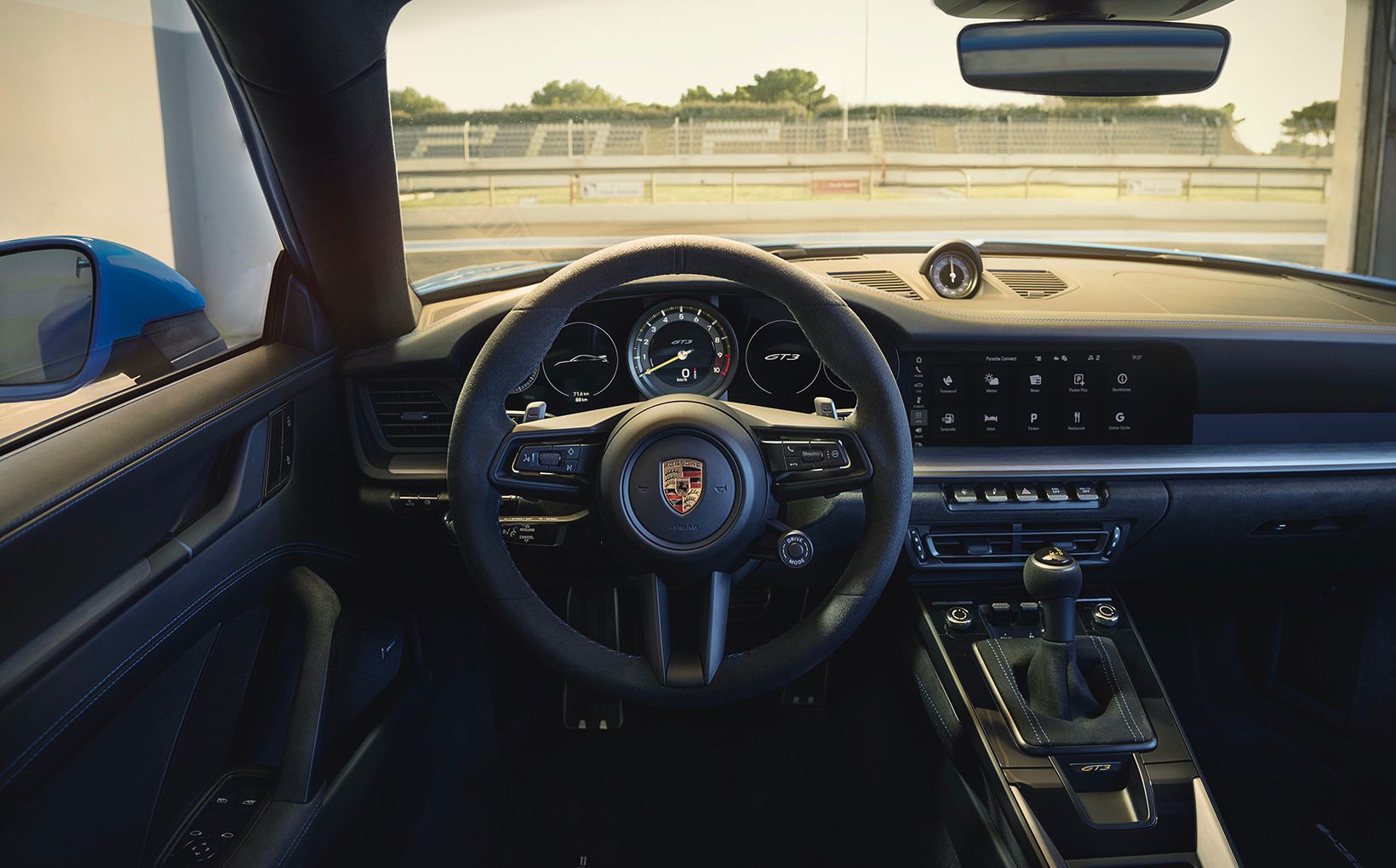 Is the GT3 the perfect blend of racecar and real-world capability?

The handling features don’t stop there though – also included is a variable ratio, electromechanical power steering system which acts on both the front (primarily) and rear axles.

Befitting of such a track-honed vehicle, the brakes are almost as beefy as the performance figures with six-piston callipers grabbing 408x34mm rotors up front and four-pot units clamping 380x30mm discs at the rear.

Just because it’s designed for track work doesn’t mean Porsche has forgotten the GT3’s road manners however with executives having commented previously on the genuine day-to-day usability of even the most focused GT and RS models. 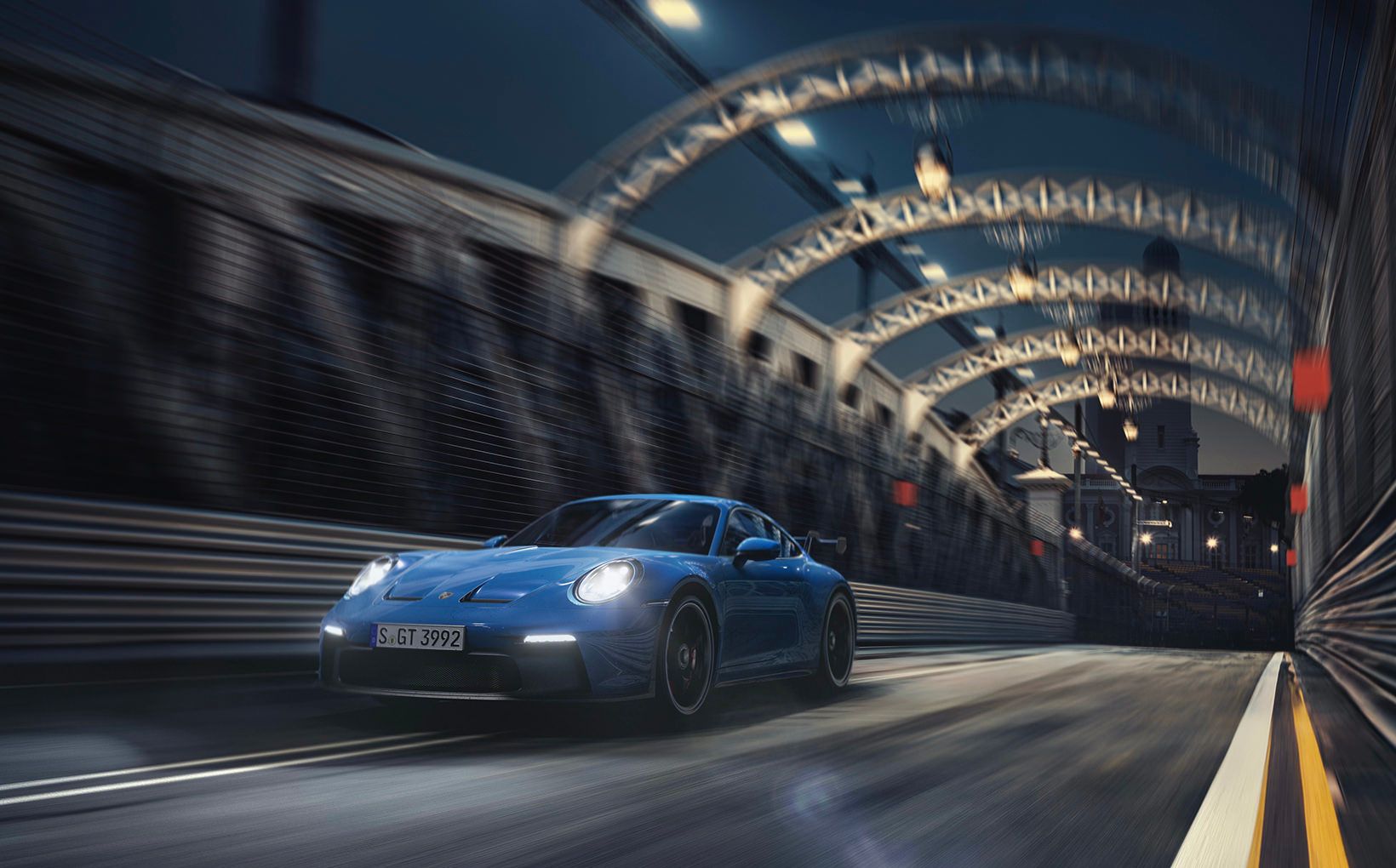 There is almost guaranteed to be an even more focused RS version along soon enough.

As a result, the GT3 scores most of the gear found on the rest of the 911 range, including the Porsche Communication Management (PCM) 10.9-inch touchscreen infotainment system and a pair of 7.0-inch instrument cluster displays (with track screen function).

One key piece of practicality that has been binned however is the regular 911’s 2+2 seating layout with the rear pews being ditched in favour of a body stiffening roll cage while the front seats have been swapped out for lightweight bucket units.

Those wanting even more track ability will be pleased to know the stage is set for new-generation GT3 RS to emerge at some stage in the near future while others hoping for a more subtle and low-key experience can likely expect the return of the GT3 Touring as well.