FORD has revealed tantalising details of its more powerful Ranger Raptor ahead of the high-performance off-roader’s end-of-year debut.

The model is further kitted out with heavily revised suspension, a reinforced chassis and extensively overhauled off-road equipment, including permanent four-wheel drive with front and rear diff-locks to create what its maker says is the ultimate performance truck. 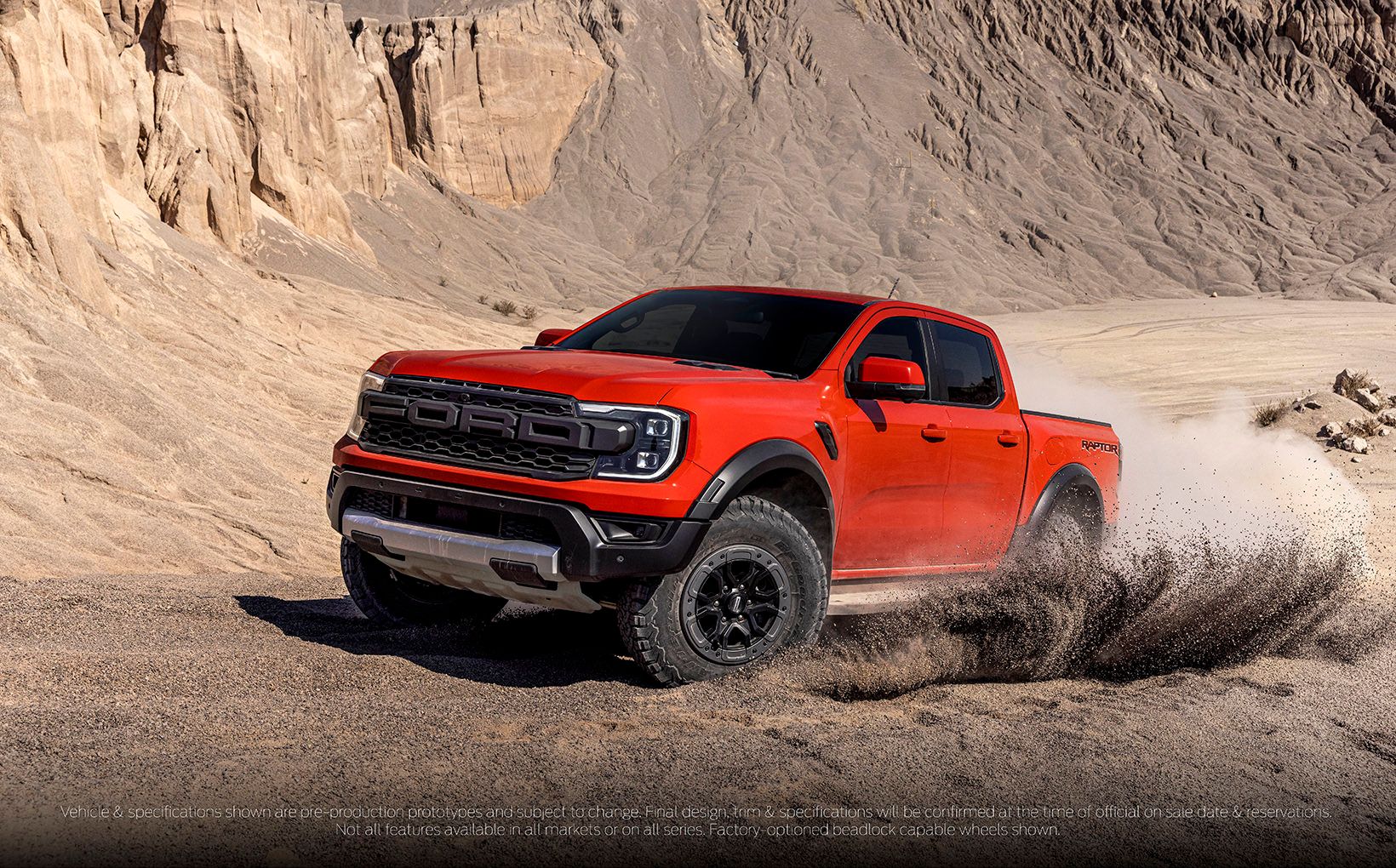 The new Ford Ranger Raptor will arrive locally at the end of 2022.

“When we started working on the truck, we decided pretty early on in the piece that we wanted to go all-out in the pursuit of creating the ultimate performance truck,” said Ford Performance chief program engineer for Ranger Raptor Dave Burn.

We had an excellent start with the existing Ranger Raptor, so our job with the new one was to lean hard into the Ford Performance DNA and to provide something that was both unique in its segment and would also be able to create a halo for the entire brand.

“At the core of all genuine performance vehicles is an emotive ownership experience – that means the appearance, the steering handling and braking, the acceleration and, importantly, the sound all come together in perfect harmony to give the vehicle personality, which in turn generates an emotional connection with the owner.

“I believe we've achieved that with the next-gen Ranger Raptor. And in doing so, we've reset the benchmark for what a mid-size performance track can be,” he added. 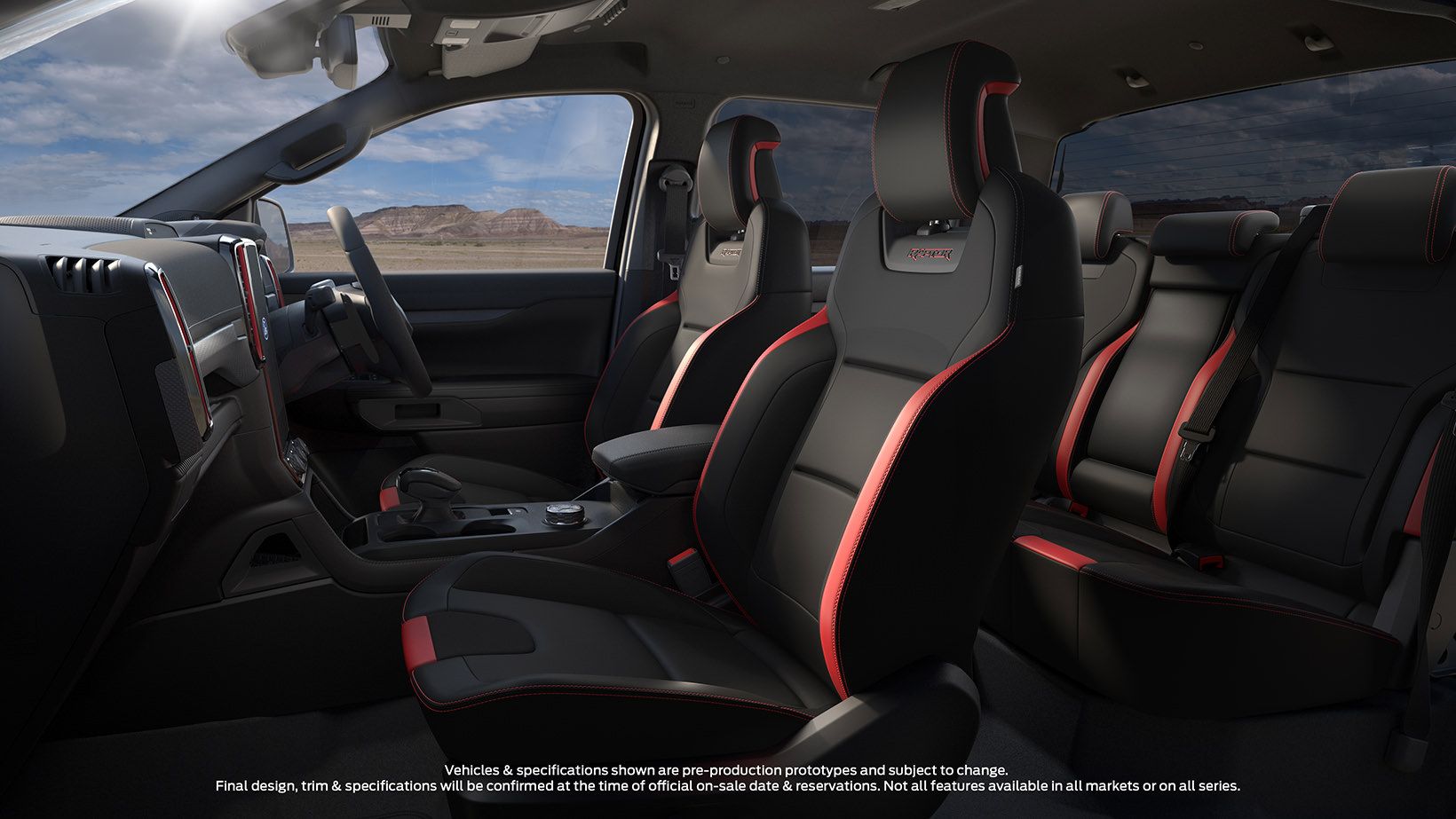 Moe technology and high-quality finishes throughout the new model.

Mr Burn said the performance of the new Ranger Raptor during extensive local testing of over a variety of terrains – and at varying altitudes – had proved that the character of the truck was an ideal match to customer expectations. What’s more, the newly adopted variable exhaust note gave the dual-cab utility a soundtrack that finally matched its looks.

Those looks – honed under the supervision of Ranger Raptor exterior design manager David DeWitt – were inspired in part by the Lockheed Martin F-22 Raptor fighter jet. Like the outgoing model, the new ute features additional flaring over the haunches and wheel arches, bonnet and fender vents, and a separate front bumper with rated recovery hooks.

The interior is highlighted by fiery red inlays on the dashboard and in the sports seats, with unique “Raptor” engraving set in the lower portion of the leather-wrapped steering wheel. 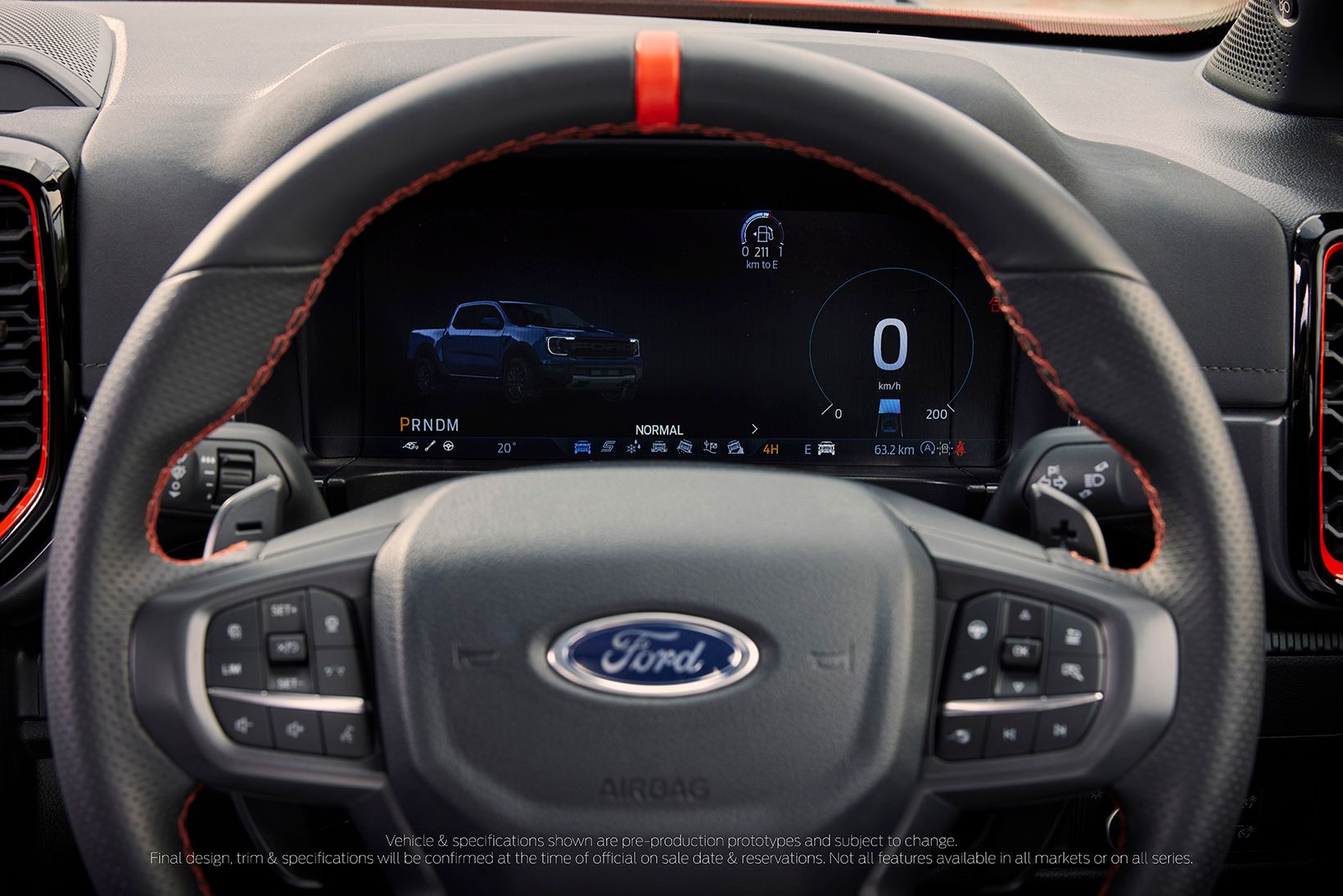 Pricing has not yet been revealed, but the outgoing Raptor started at $85k.

The new Ranger Raptor is equipped with a 10-speed auto, the calibration of which is unique to the flagship ute. It features real-time adaptive shift scheduling to ensure you're always in the right gear at the right time and is available with permanent four-wheel drive with the option of switching to rear-wheel drive.

“One of the key things when building a performance vehicle is the way it sounds. Sound helps to find the character of the vehicle, gives a car its signature, it adds to the overall driving experience and really reinforces the performance of the vehicle,” said Ranger Raptor vehicle engineering manager Peter Spence. 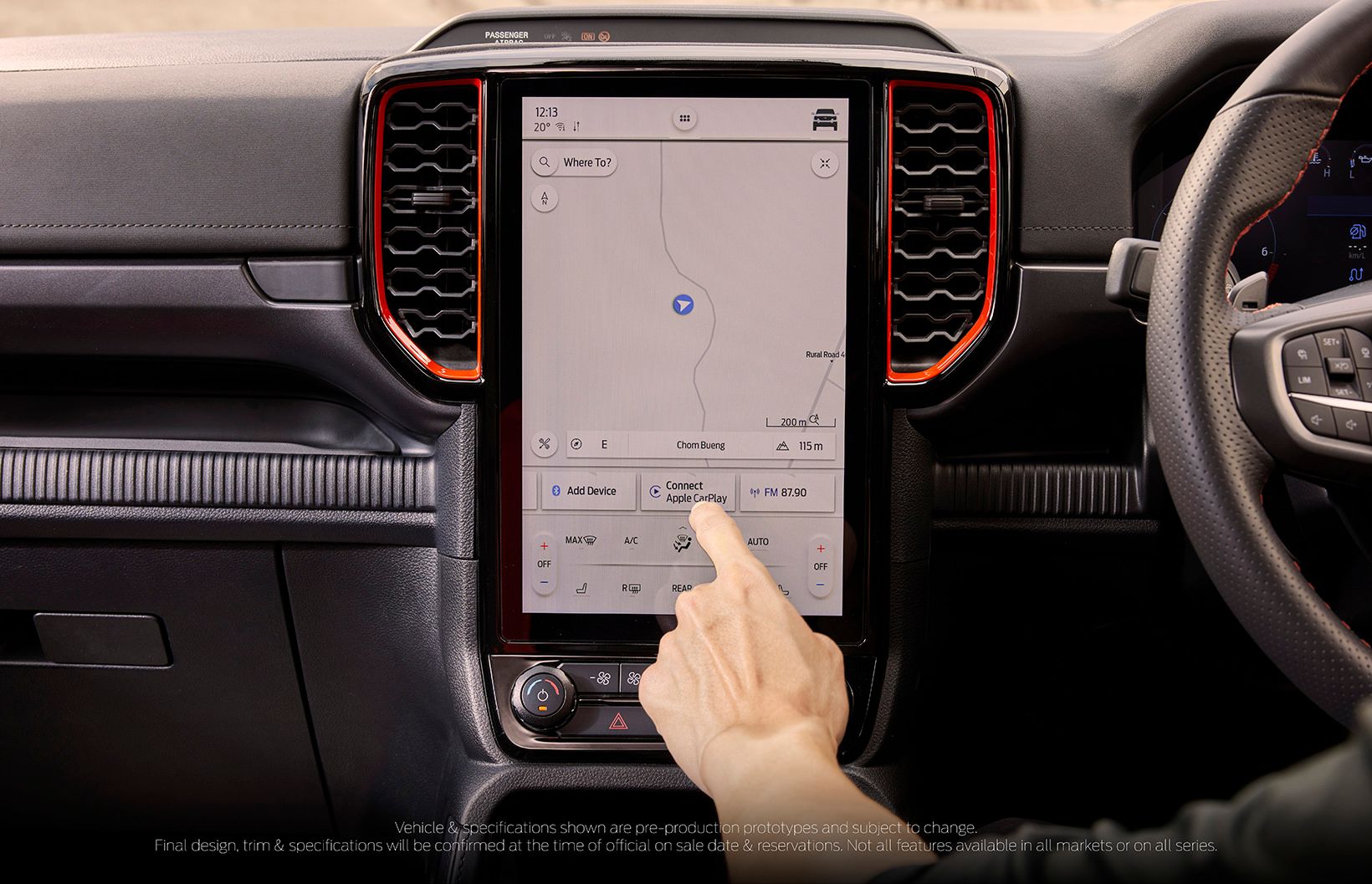 Drivers can select how loud or quiet the Raptor’s exhaust is at the push of a button.

“For the next-gen Ranger Raptor, we wanted to develop an exhaust note that was unique but purposeful, powerful; something that would make you want to lower your windows and turn off your radio so that you can fully enjoy the sound.

“The acoustic magic takes place in Raptor’s active-valve twin exhaust system. It can be controlled by the driver based on their preference or automatically, according to the drive mode they've selected.

“Inside the two-and-a-half-inch exhaust system there are two active valves that open or close to various degrees, depending on which of the four modes – Quiet, Normal, Sport, or Baja – has been activated … We also offer the ability to turn the sound of the car down so that Raptor owners can be good neighbours,” added Mr Spence. 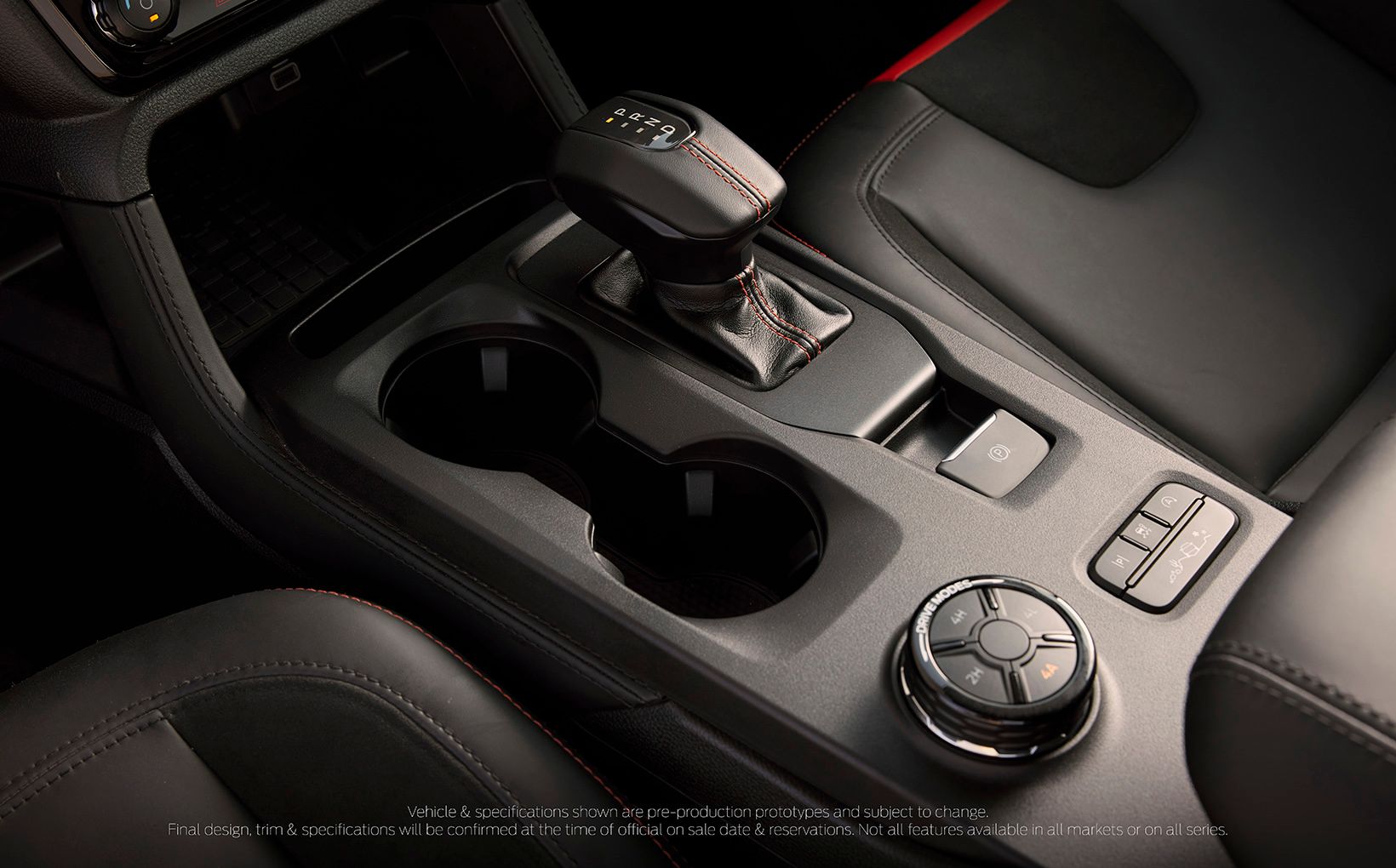 Every element of the Raptor includes a sporting touch unique to the grade.

The Ranger Raptor – which continues to feature Fox-sourced dampers – has undergone significant suspension tuning and chassis stiffening as part of its 2022 overhaul.

“A number of suspension frame changes were required to complement the new powertrain. We started by reinforcing the front shock absorber tower’s structure so that it could handle some of the punishing off-road conditions … and this truck is now able to take an incredible amount of punishment,” emphasised Mr Burn.

“We sourced the most sophisticated shock absorbers that we could find. We selected Fox’s two-and-a-half-inch live-valve shock absorber system. But they aren't an off-the-shelf kit – we spent time developing our ideal damper tune using a mixture of Computer Aided Engineering and real-world testing to ensure the shocks came with the kind of control and the capability we wanted.

“The team developed everything from the right height to the spring rates and the fine tuning of ride zones within the damper … The system is smart enough to predict suspension movement and can increase or decrease the damping support depending on the terrain and driving style. 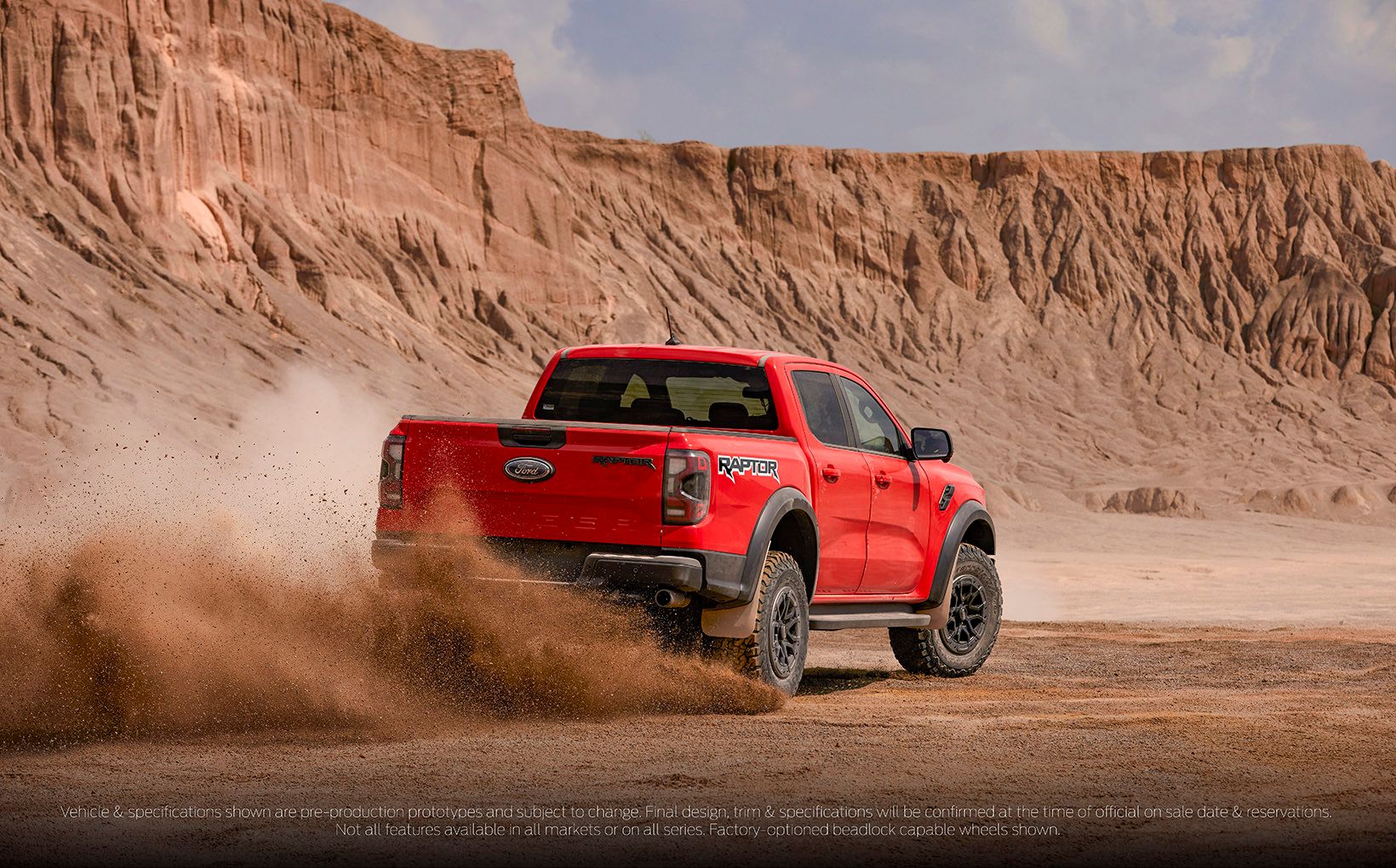 The off-road suspension can adjust damping rates 500 times per second.

“It's so fast that the system will have adjusted the damping before a driver has even noticed a change in the terrain. Sensors placed around the vehicle measure suspension displacement and velocity to adjust the damping rates of each corner up to 500 times per second,” he concluded.

Ford Australia said the Thai-built Ranger Raptor would be available before the end of the year. It will join the recently-revealed Ranger line-up – which is due imminently – as the flagship model. For the first time, its driveline won’t be shared with any regular Ranger variant.

The latest model is Ford’s first completely redesigned Ranger since the release of the T6 series in 2011 and will be released in five core variants: XL, XLS, XLT, Sport (new) and Wildtrak.