THE S-Class has been Mercedes-Benz’s flagship passenger car since it first appeared in 1972 and has been offered in no less than seven different generations to date, with the latest generation once again raising the bar in showcasing Mercedes’ technical know-how and abilities.

With the S-Class having always been the pinnacle of Mercedes luxury, the prospect of a new model can often lead people to wonder what the three-pointed star is going to come up with next, or rather, what they could possibly do next.

Well, with the recent debut of the seventh-generation S-Class, the answer was revealed… and it is a lot, primarily in terms of safety.

Mercedes has literally raised the S-Class to a new level of safety and tech with the optional inclusion of the E-Active Body Control suspension and Pre-Safe Impulse Side system. 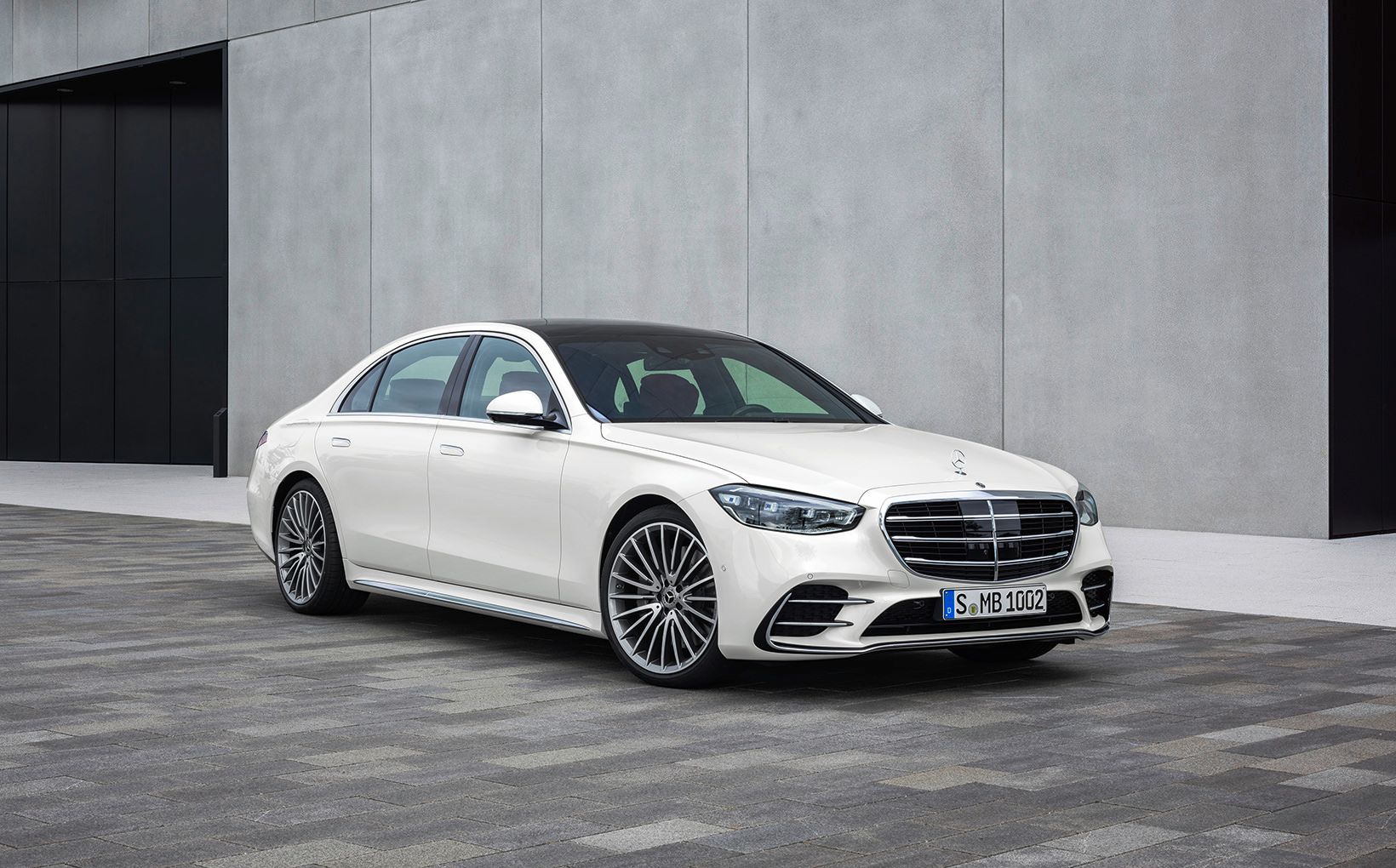 The S-Class is the shining light of Mercedes-Benz luxury and technological know-how.

Together, the systems will raise the body of the S-Class by 80mm if an imminent side impact is detected via the abundance of sensors and cameras spread around the car.

The thinking behind the new tech is that the energy generated by the collision will be diverted through the door sills, allowing the chassis to take the brunt of the impact rather than the cabin, thereby protecting the car’s occupants.

This is not the first time we have seen this tech – Audi recently launched a similar system on its flagship S8 – however at this stage it seems the system will be able to be optioned on any S-Class instead of just the range topper. 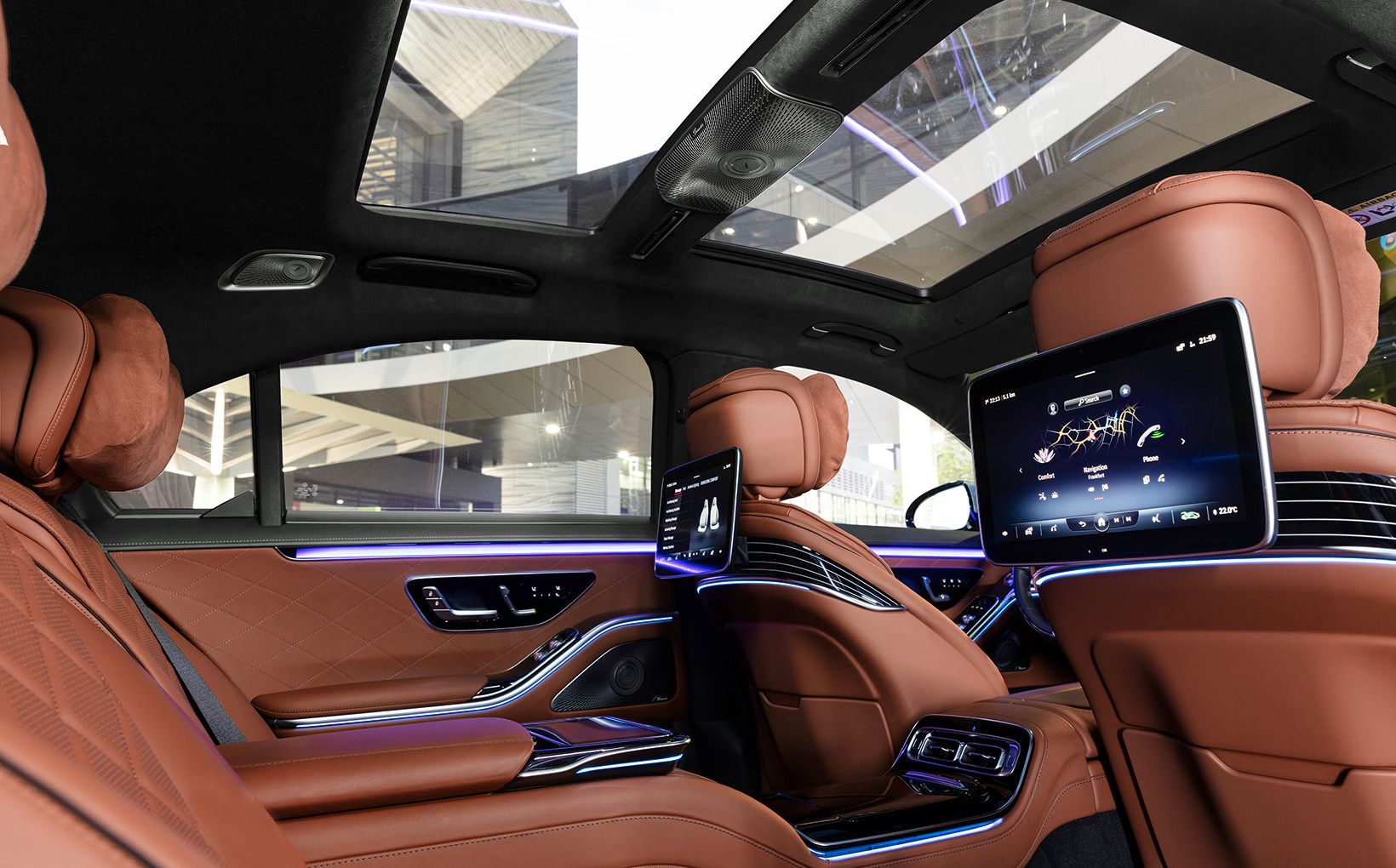 There is so much stuff in the S-Class that Mercedes only had space to single out and expand on the 10 key new features at the global debut.

Obviously there are way more features than this just these 10 packed into the more than 5m-long body, with even chief executive Ola Källenius describing the new S-Class a “technological tour de force”.

The other big talking point – in terms of tech at least – with the new model is the aforementioned debut of the second-generation MBUX infotainment system and corresponding MBUX Interior Assist.

One of the key new innovations of the second-gen MBUX system is its 3D driver display which “allows spatial perception of the scene with a real 3D effect thanks to eye-tracking” and voice-recognition.

The eye tracking – and other functions included in the MBUX Interior Assist system – comes courtesy of a camera mounted in the ‘overhead control panel’. 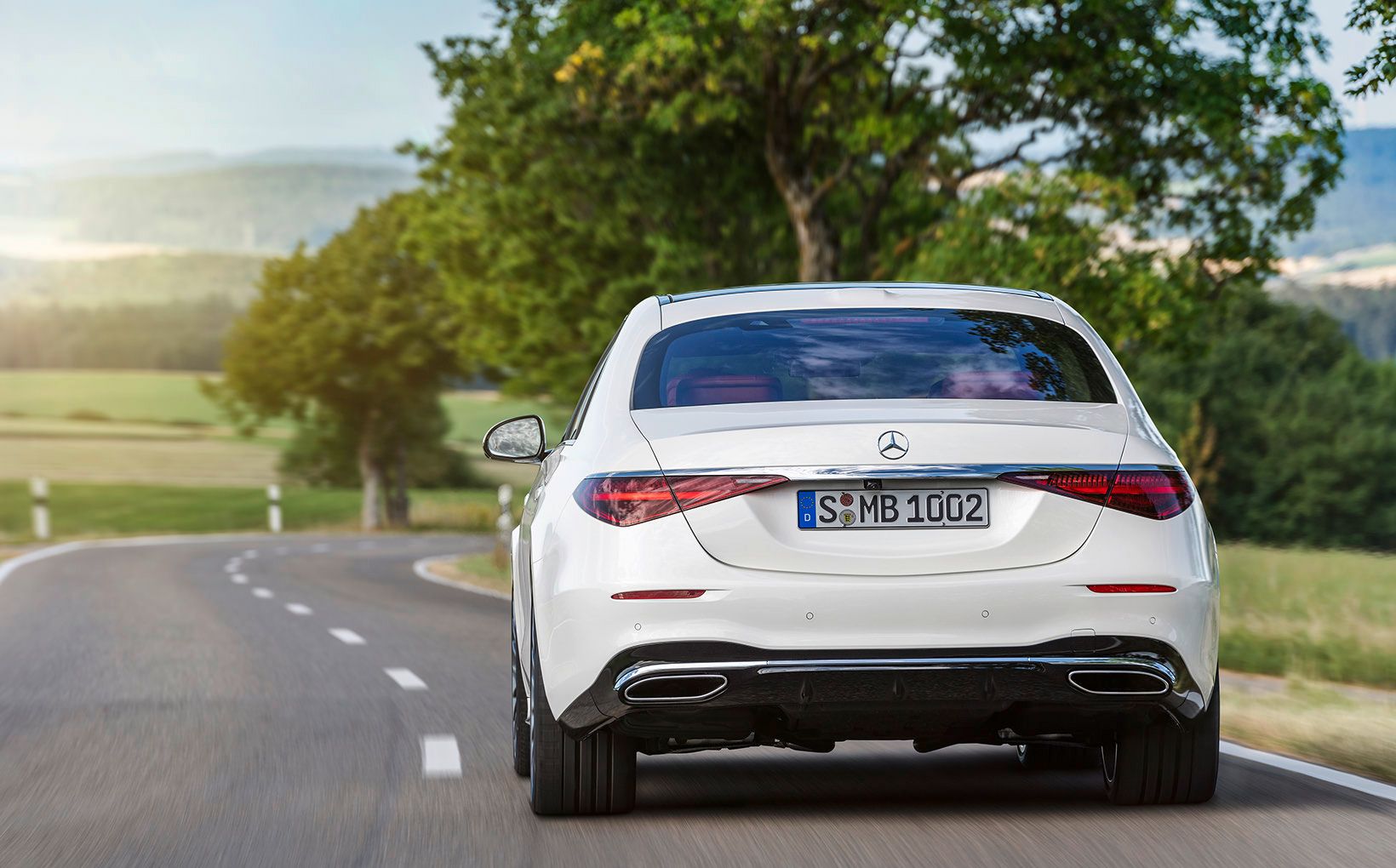 All the evidence points towards the S-Class being the first fully autonomous car from Mercedes-Benz.

The same system, along with new self-learning algorithms, is also used to perform many of the functions included in the new MBUX Interior Assist suite, marking yet another step towards autonomous driving taken by the S-Class.

According to Mercedes, the system “recognises and anticipates the wishes and intentions of the occupants” by analysing their body language, hand movements and head direction and then responds “with corresponding vehicle functions”.

“For example, if the driver looks over his/her shoulder towards the rear window, Interior Assist automatically opens the sunblind,” the brand said in a statement. 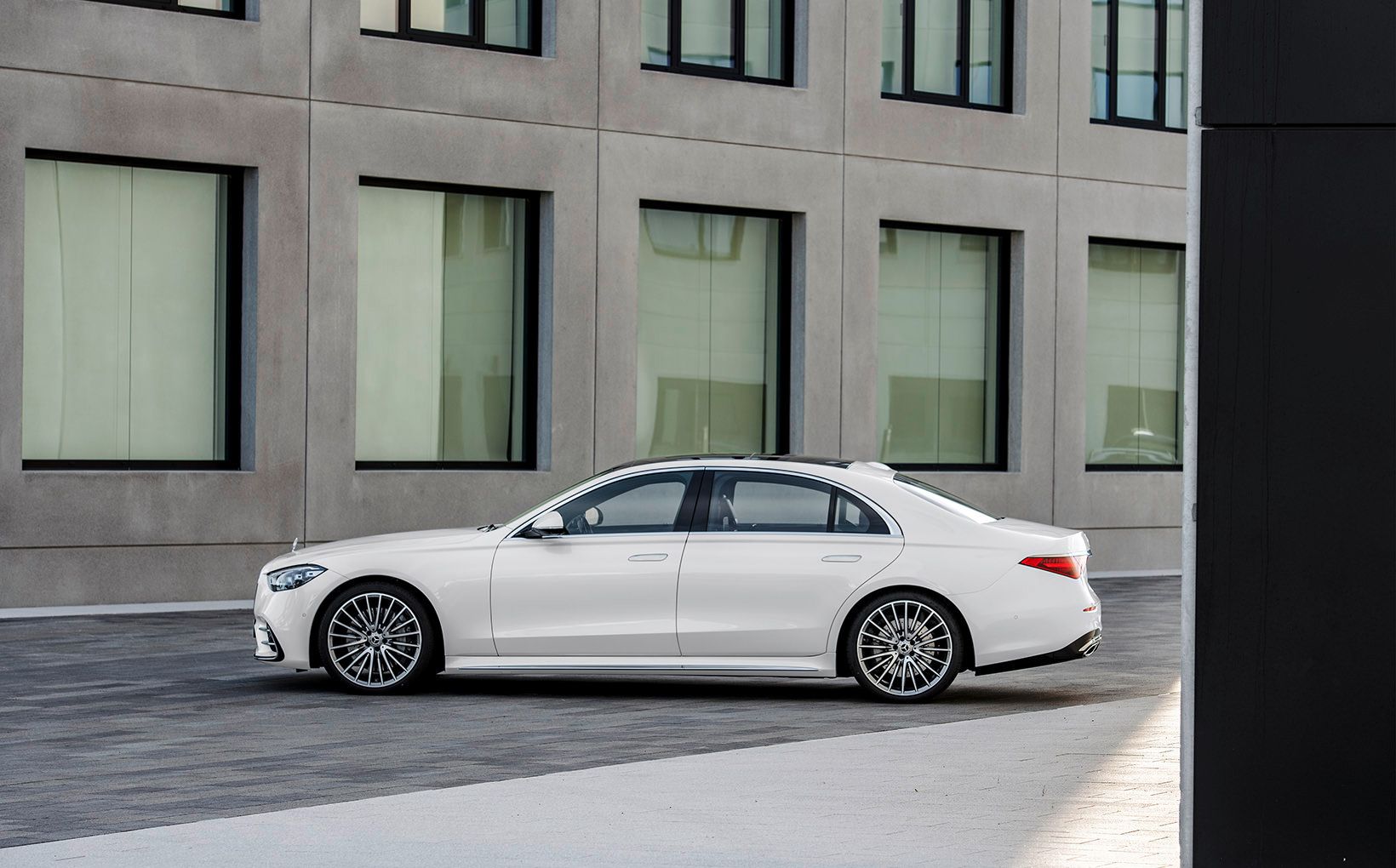 The S-Class was already a big car, and it’s got even bigger in seventh-generation form.

The long-wheelbase ‘L’ variants meanwhile have also grown, now measuring 34mm longer and 12mm taller than before, with both versions riding on noticeably longer wheelbases (+71mm/+51mm).

The extra length has resulted in an additional 41mm of legroom in the back of the short-wheelbase variants and 24mm for the long wheelbase, while a 36mm-wider front track has resulted in an extra 38mm of front ‘elbow room’ – one of the key points being emphasised by executives.

The rear track has also been widened by 51mm, combining with the longer overall body length to up boot capacity by 20 litres to 550L.

With such large proportions, it’s little wonder Mercedes has developed a new all-wheel-steering system (optional) for the S-Class which helps to shave 1.9m off the turning circle. 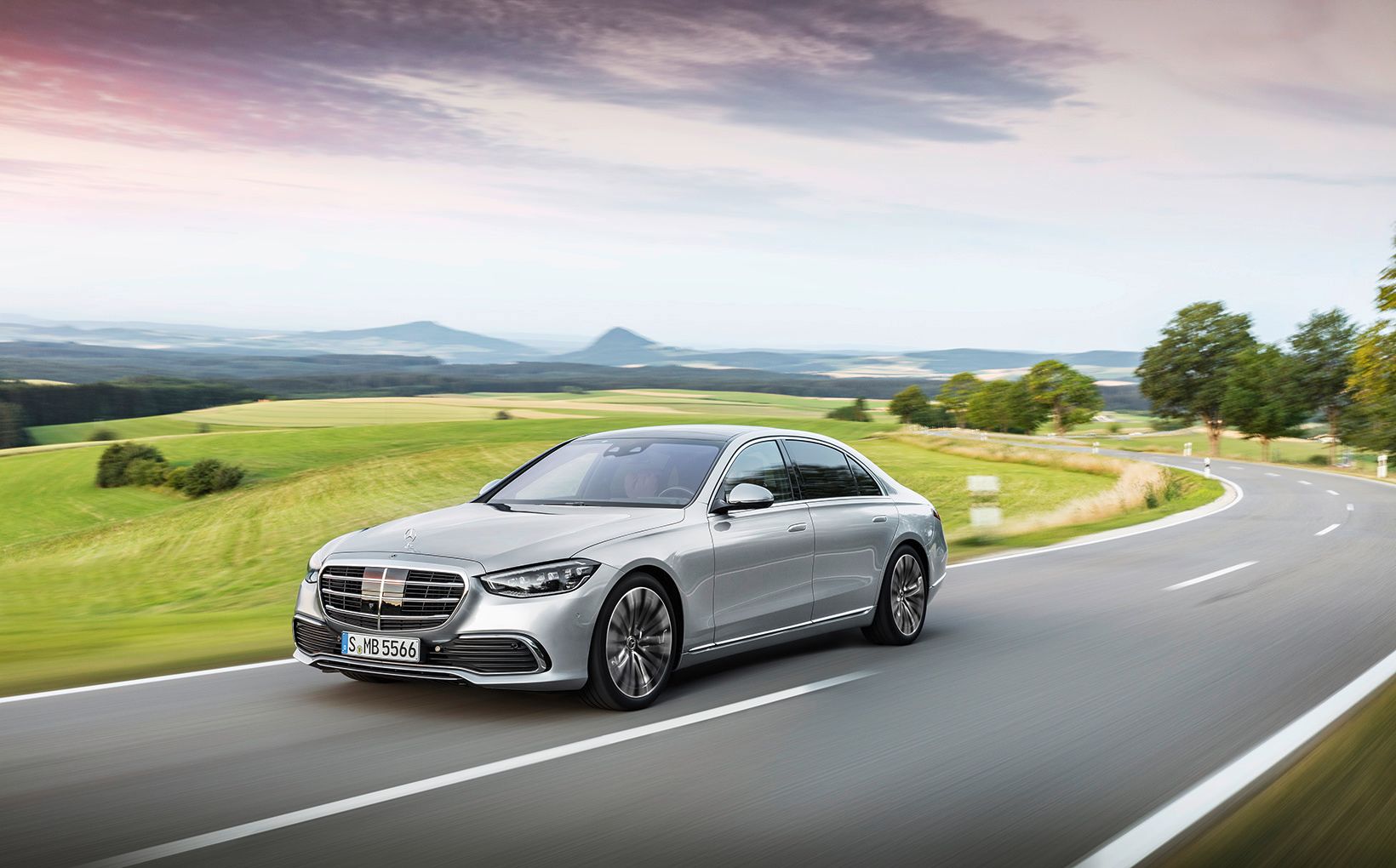 On the style front, designers have brought the luxo-limo more closely into line with the rest of the current Merc range with the big four-door sporting softer, more rounded features with gentler contour lines.

As is usually the case with a new model, the biggest changes have been made at the front where the previous model’s triple-intake lower fascia has been ditched in favour of a new full-width single unit.

The centrepiece of the new front end is without doubt the new enlarged radiator grille which dominates the front end beneath the bonnet-mounted tri-pointed star.

The new grille is flanked on other side by a set of longer, narrower headlights which add more of a frown to an otherwise classy but sedate look. 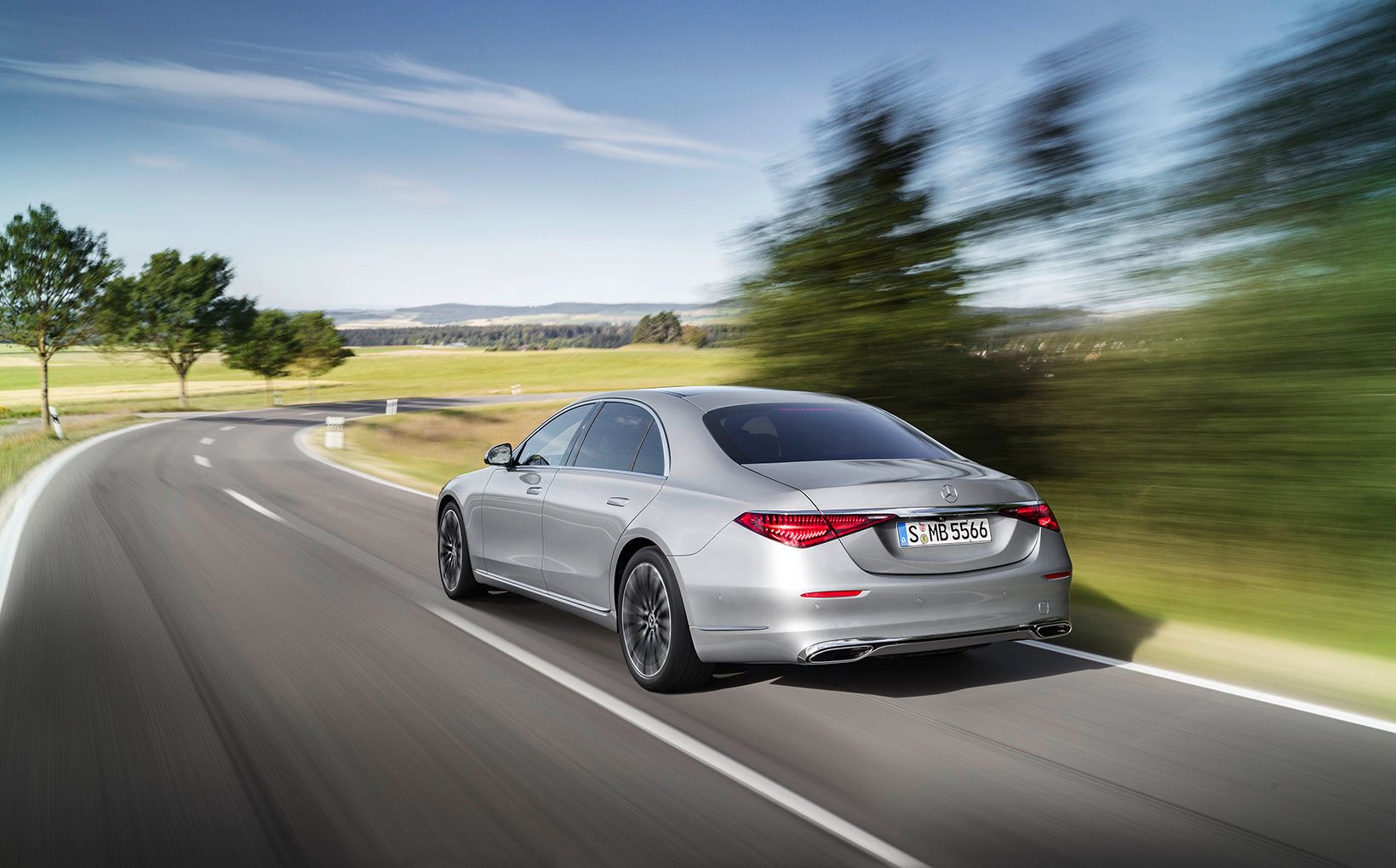 Elegance takes precedence over everything else in the styling.

Just two powertrains will be available from launch – both in-line sixes – with bigger, more powerful more units to come, including a V8-powered mild-hybrid and at least one offering from the mad in-house tuning arm that is AMG.

Before then though, the range will be opened by a 210kW/600Nm 2.9-litre turbo-diesel mill which will be responsible for motivating the S350d, S350d 4Matic and S400d 4Matic, although in the latter it will be tuned to develop a meatier 243kW/700Nm.

In either guise, the petrol engine is boosted by Mercedes’ proprietary EQ Boost starter-generator which can provide an additional 16kW/250Nm during acceleration. 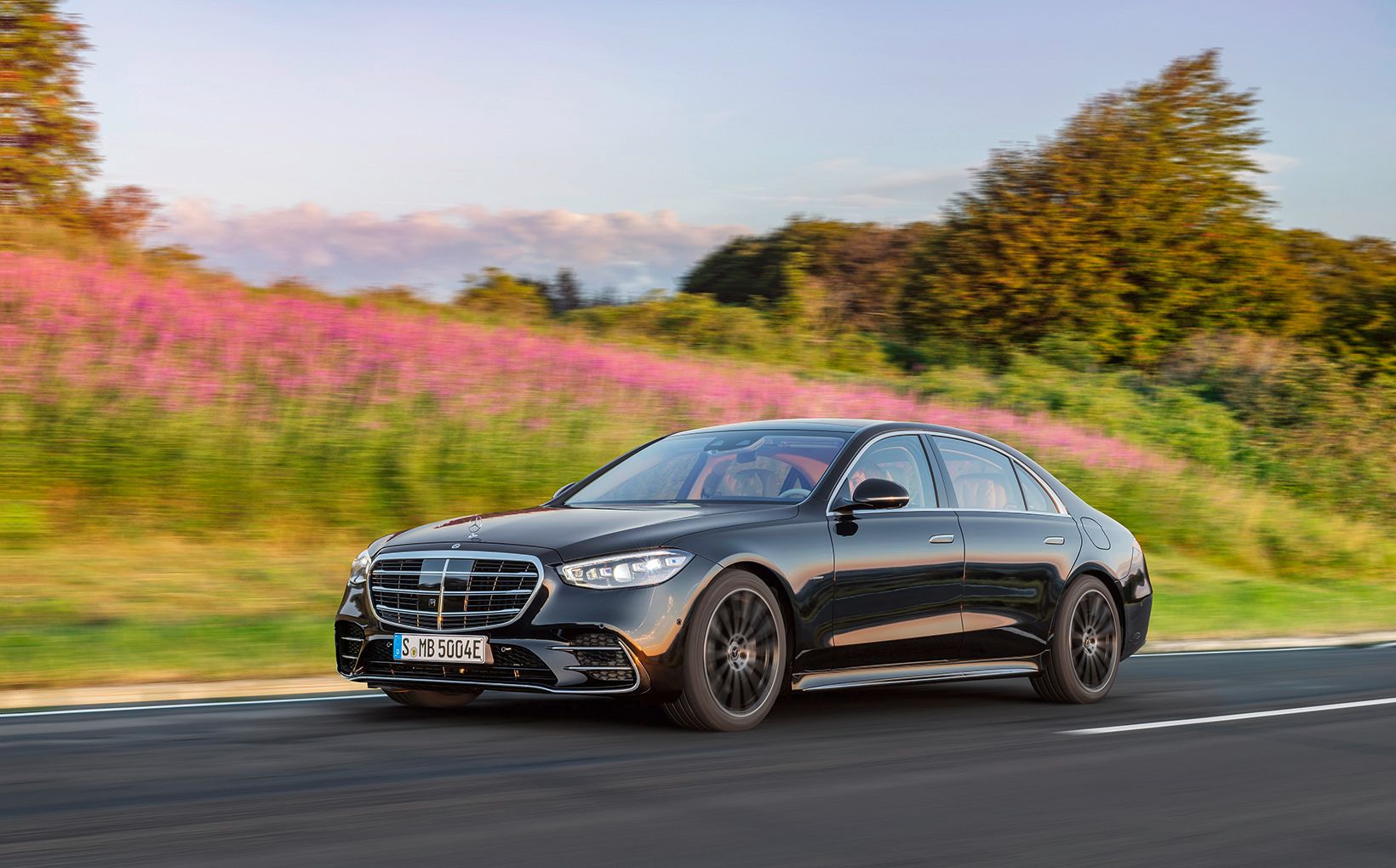 The promise of a looming V8 hybrid must have Mercedes fans everywhere excited.

Gear shifting duties are taken care of by a nine-speed automatic transmission regardless of drivetrain, with power sent to either the rear wheels or all four wheels in the case of the 4Matics.

For decades now, the world has waited with bated breath to see what gizmos and gadgets Mercedes will pack into the S-Class and with every new model, they still manage to surprise us… imagine another three or four decades down the line…

Protect your Mercedes-Benz. Call Shannons Insurance on 13 46 46 to get a quote today.