Founded in 2007, Carbon Revolution has industrialised the supply of the world’s first one-piece carbon-fibre wheel. The company quickly progressed from singular prototypes to designing and manufacturing wheels for car manufacturers such as Chevrolet, Ford, Ferrari and Renault.

The manufacturer – with multiple patents to its name – has six programs in production with three global OEMs, and a further nine programs in development, and says the state-of-the-art automated facility will combine advanced machine learning and robotics with VR and AI technologies to improve production flow and operational efficiency. 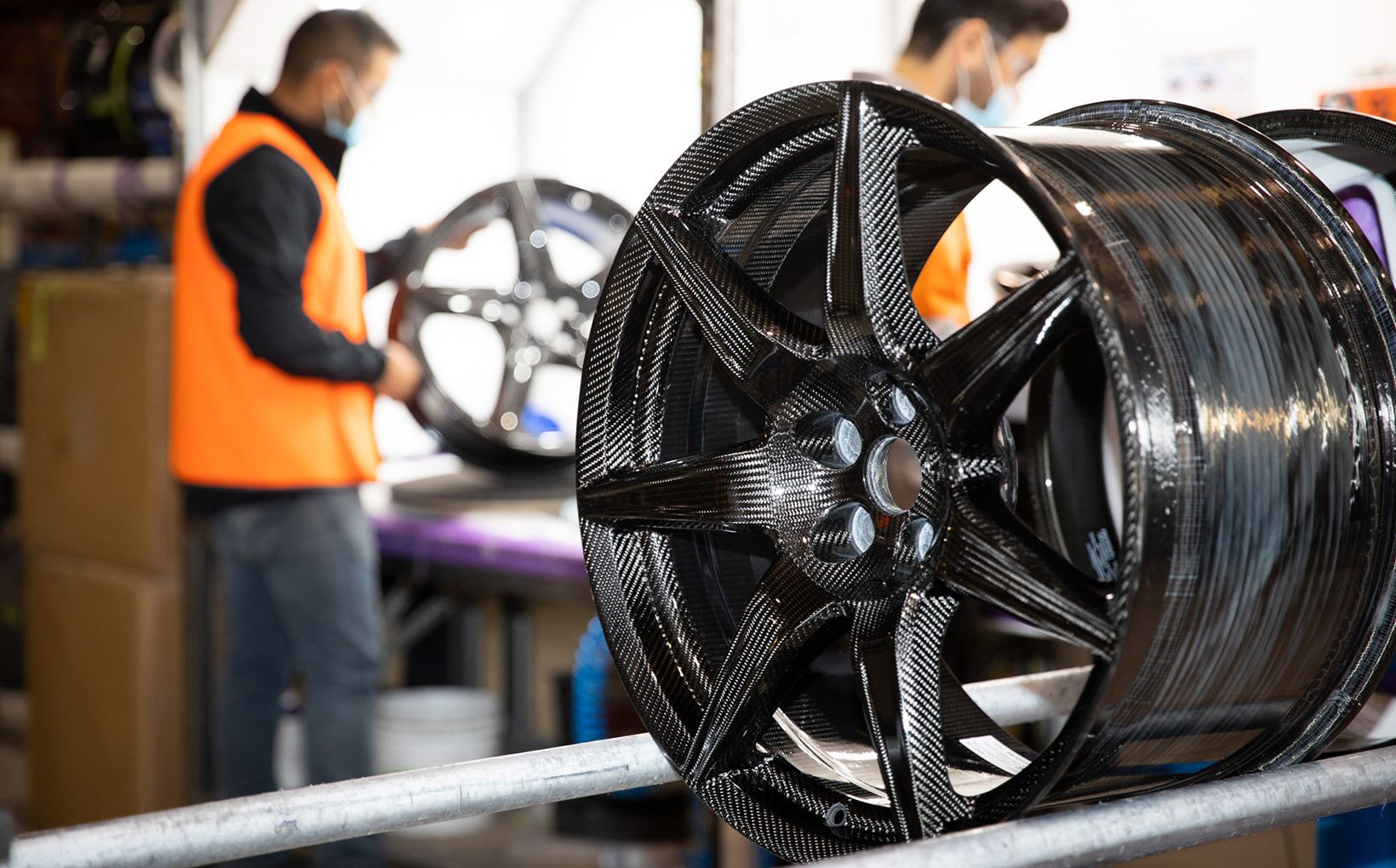 Carbon Revolution’s Mega-Line facility is the first of its kind in Australia.

Carbon Revolution CEO Jake Dingle says the use of cyber-physical production facilities will allow the firm to become even more efficient and productive – and less wasteful – and will utilise a network of digitally connected automated production systems to ensure its wheels are produced to the highest possible quality and in higher volumes than was previously possible.

“The Mega-Line is expected to provide a step change in production scale that will enable the company to deliver larger volume programs to a broader cross-section of the market,” Mr Dingle explained.

“Since we established the business, we have taken great steps to automate our production process. Many of these new automated processes have been iterated over the past few years, but the Mega-Line integrates them, in combination with a more automated part flow.

“It will mean a step change in production capacity and cost reductions for Carbon Revolution.” 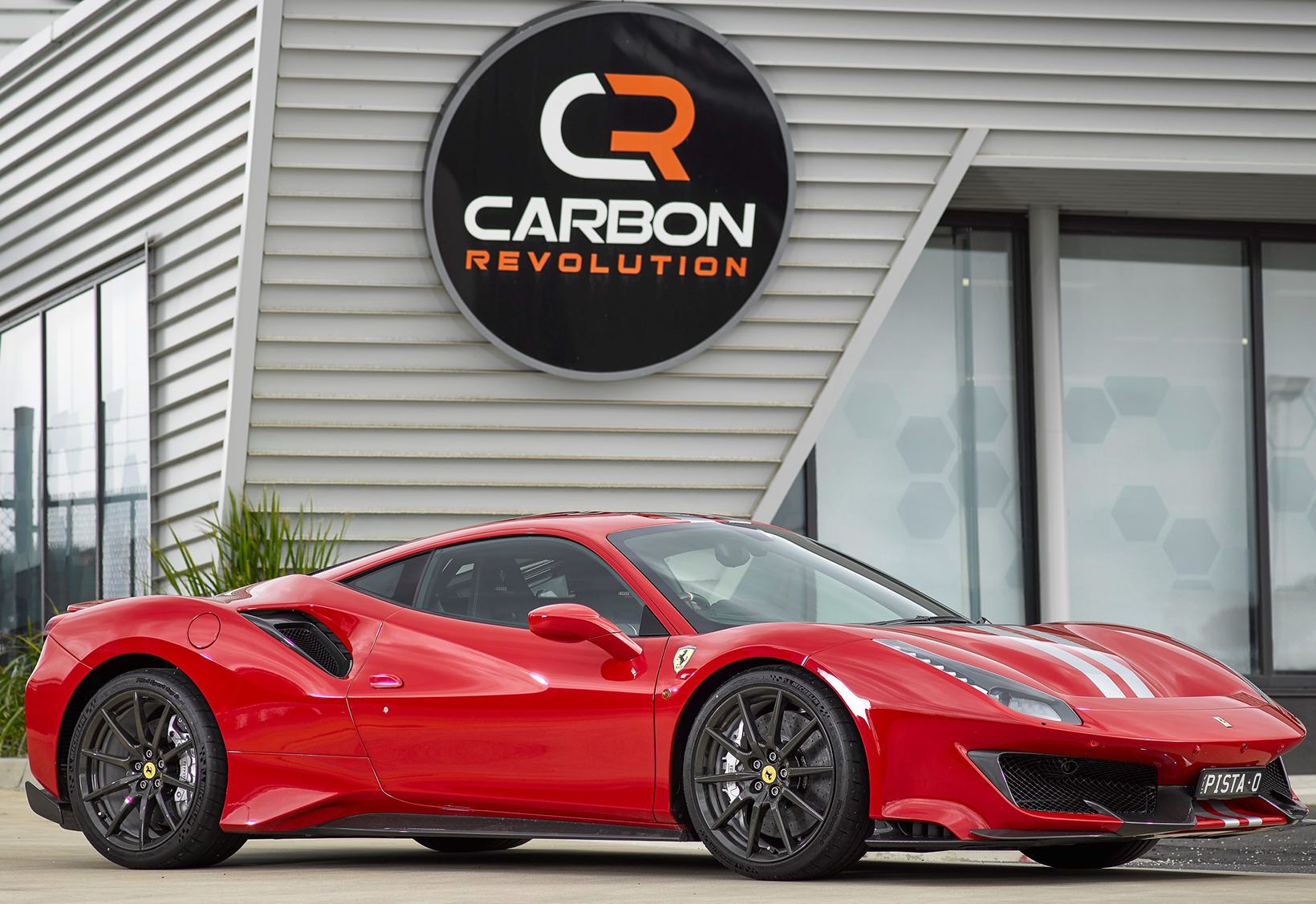 The Mega-Line upgrade is the second expansion of Carbon Revolution’s production facilities in four years and is expected to almost double the company’s output. The line will fit inside the existing premises on a newly created second level and significantly reduce the impact of wheel production on the surrounding environment.

The facility will incorporate new conveyor lines, automated tools and robots to improve throughput and, once operational, will approximately double Carbon Revolution’s capacity.

“It allows us to scale up greatly, while still maintaining the quality that we are renowned for among our OEM customers. Importantly, greater use of AI technology means we can run quality checks for a much larger number of wheels in an automated (rather than manual) way, which, obviously, is good for efficiency,” Mr Dingle said. 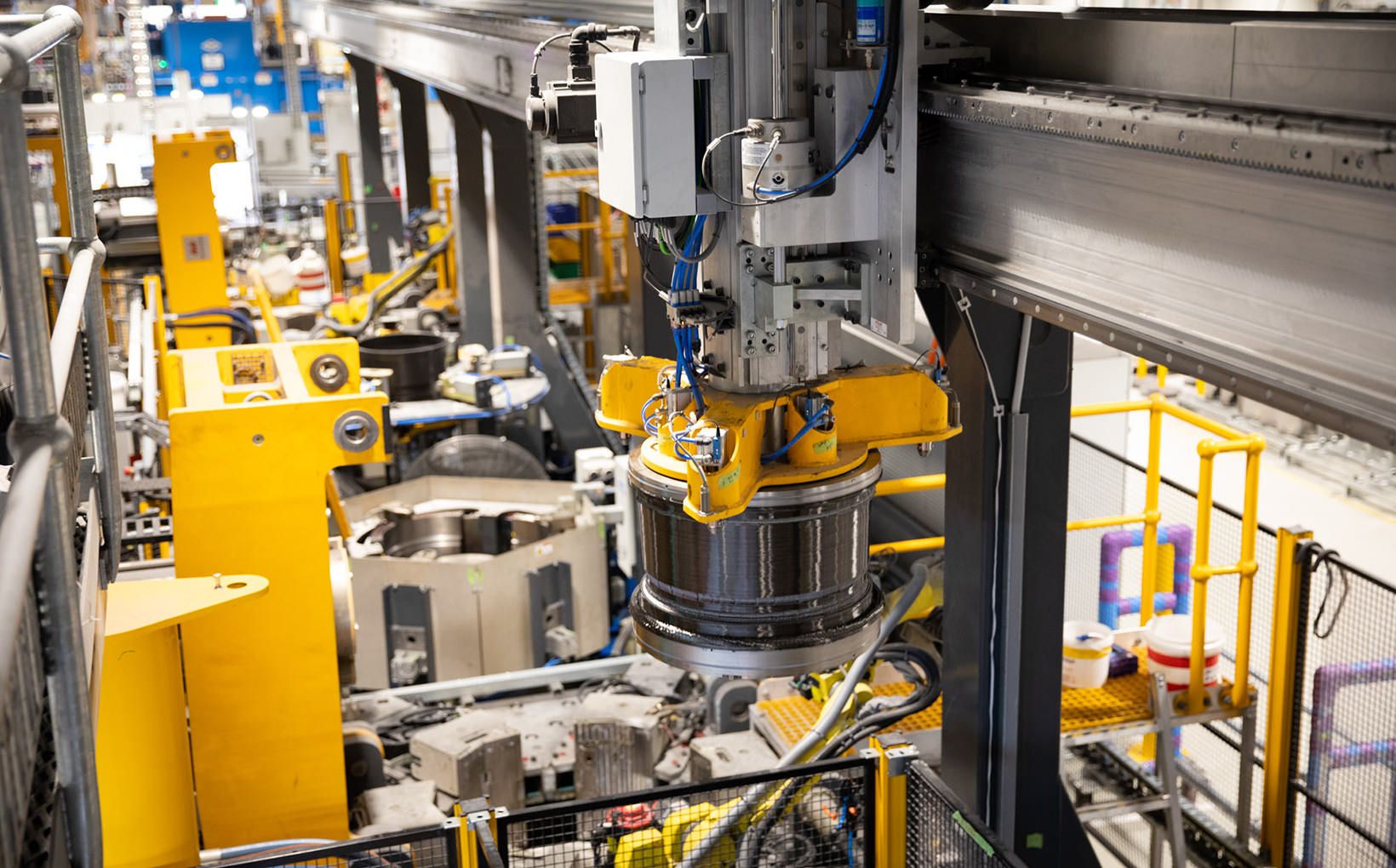 The company will manufacture an increasing number of wheels for electric vehicles.

“Previous research has that shown fuel economy or range extension benefits of up to five per cent are achievable with appropriately designed carbon-fibre wheels. The initial higher cost of our wheels versus conventional metal wheels has meant they were adopted first for performance applications,” Mr Dingle said.

“Now, we are confident that our wheels will be widely adopted globally, improving efficiency in a great number of vehicles and extending their range as the world transitions to an EV future.” 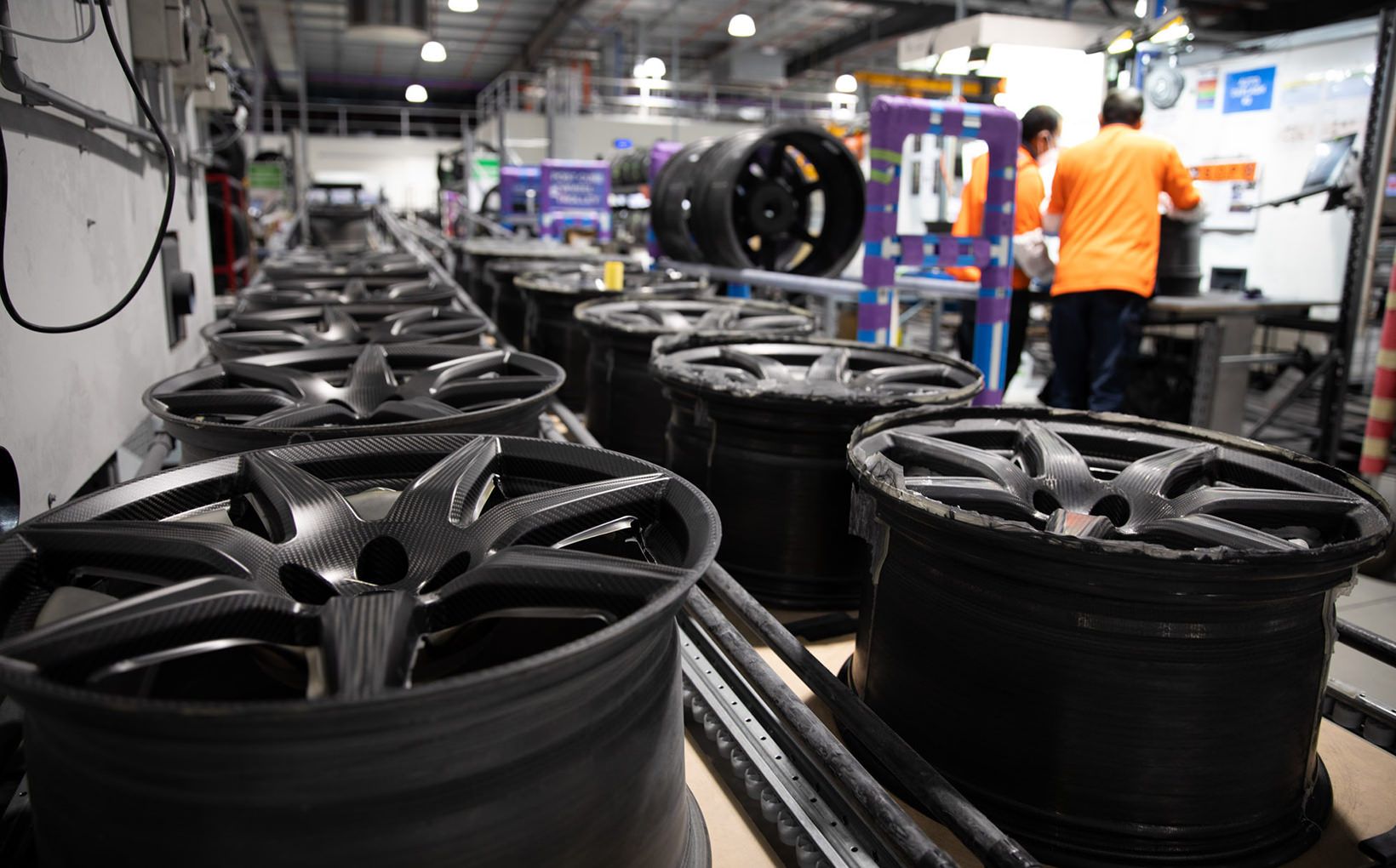 The decreased weight of carbon-fibre wheels compared with their aluminium-alloy counterparts – along with the ability to create an aesthetic design, which, at one point, would have been deemed impossible to produce – are also drawcards for EV producers. Given that wheel-well air turbulence accounts for as much as a quarter of a vehicle’s overall aerodynamic drag, it’s this change of design that is at the forefront of Carbon Revolution’s technological advancements.

“One of these advancements is the ability to produce wheel designs with low aerodynamic drag. These designs may be possible in metal wheels too, but, aluminium wheels with large surface areas tend to be exceedingly heavy, which negates the aerodynamic benefit,” Mr Dingle detailed.

“Carbon-fibre allows us to design and produce very efficient thin aerodynamic structures without incurring a weight penalty (noting that aircraft wings and helicopter rotor blades are also made of carbon fibre), which opens up great design flexibility for EV makers.” 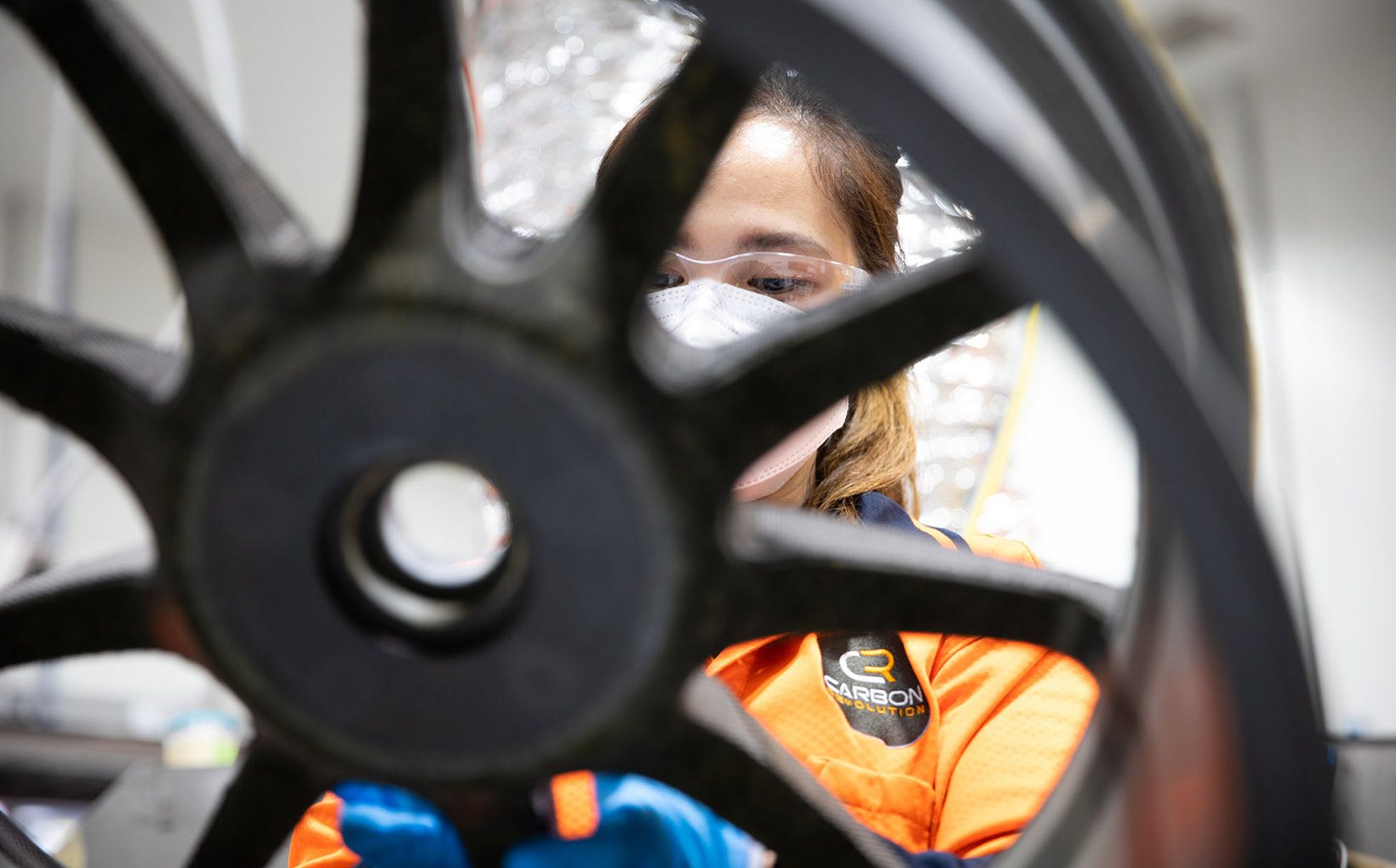 Carbon Revolution was recently announced as the supplier of carbon-fibre wheels for General Motors’ newest ‘Vette and the Geelong-based firm says its one-piece carbon-fibre wheels are the result of a five-year collaboration between GM and its own in-house engineers and designers.

The company’s largest and widest wheel features a unique, asymmetric spoke design that aids in strengthening the wheel while meeting the packaging requirements for the Z06’s brakes. 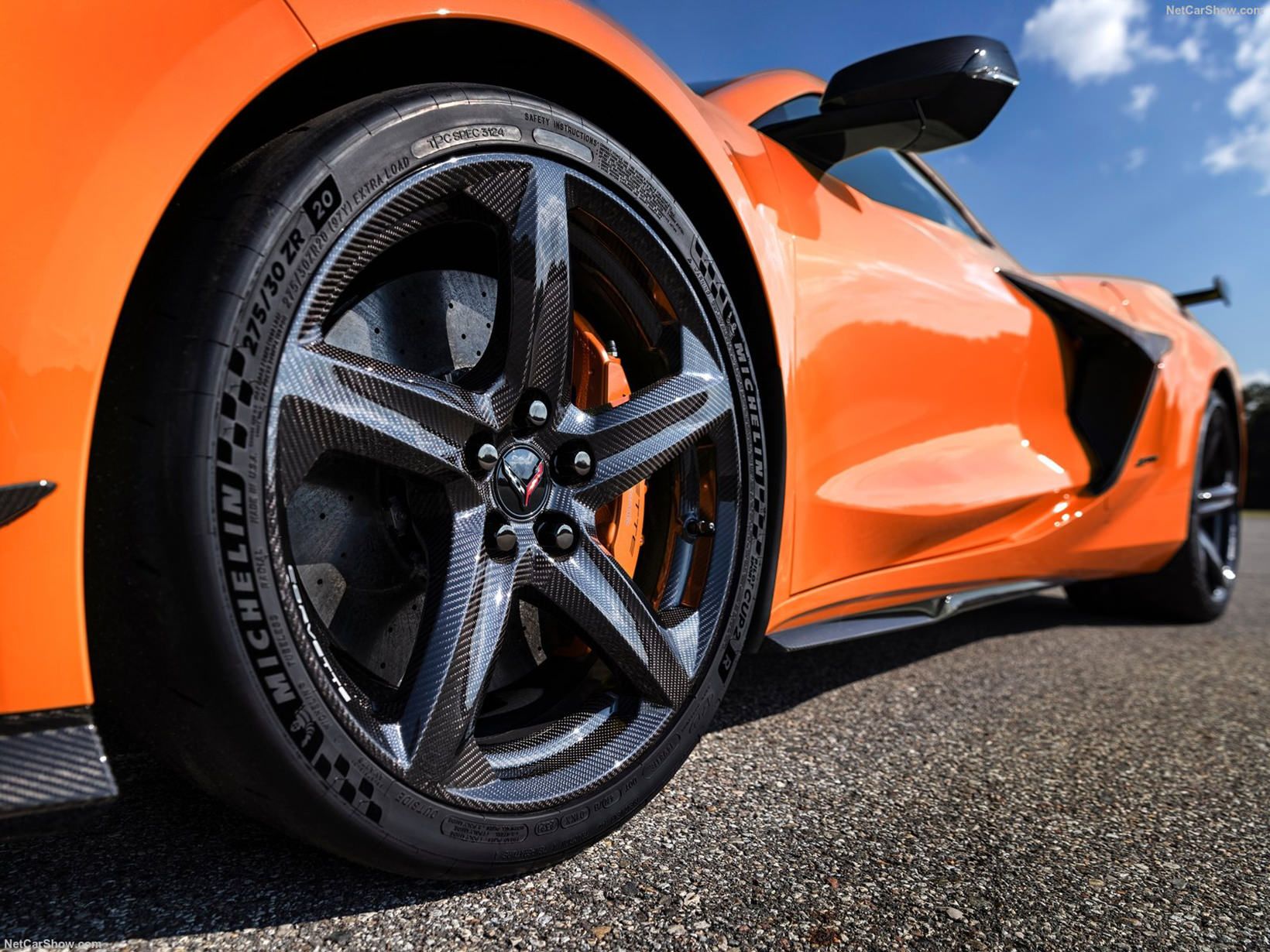 The carbon-fibre wheels of the Corvette measure a massive 21 x 13 inches!

The Corvette wheel will be available in a clear coat option that exposes the carbon-fibre weave and Carbon Revolution’s patent-pending Diamond Weave Technology finish. A painted variant, named Carbon Flash, will also be offered.