Ferrari shows off the latest iteration of its manic lightweight GT car; the 812 Competizione

Every new model the iconic supercar specialist launches considerably ups the ante over the previous one, but before it does so, it usually comes out with some rabid, stripped-down go-faster version that, more often than not, can prove bit of a handful.

Well now it’s the 812’s turn to go on a diet and get an injection of steroids because Ferrari has just launched the 812 Competizione, a lightened, hardened version of its flagship GT car.

Ferrari most definitely has form here – in 2010 it revealed and released the 599 GTO which was then followed in 2015 by the F12 TDF which were both light (for what they were) and extremely powerful. 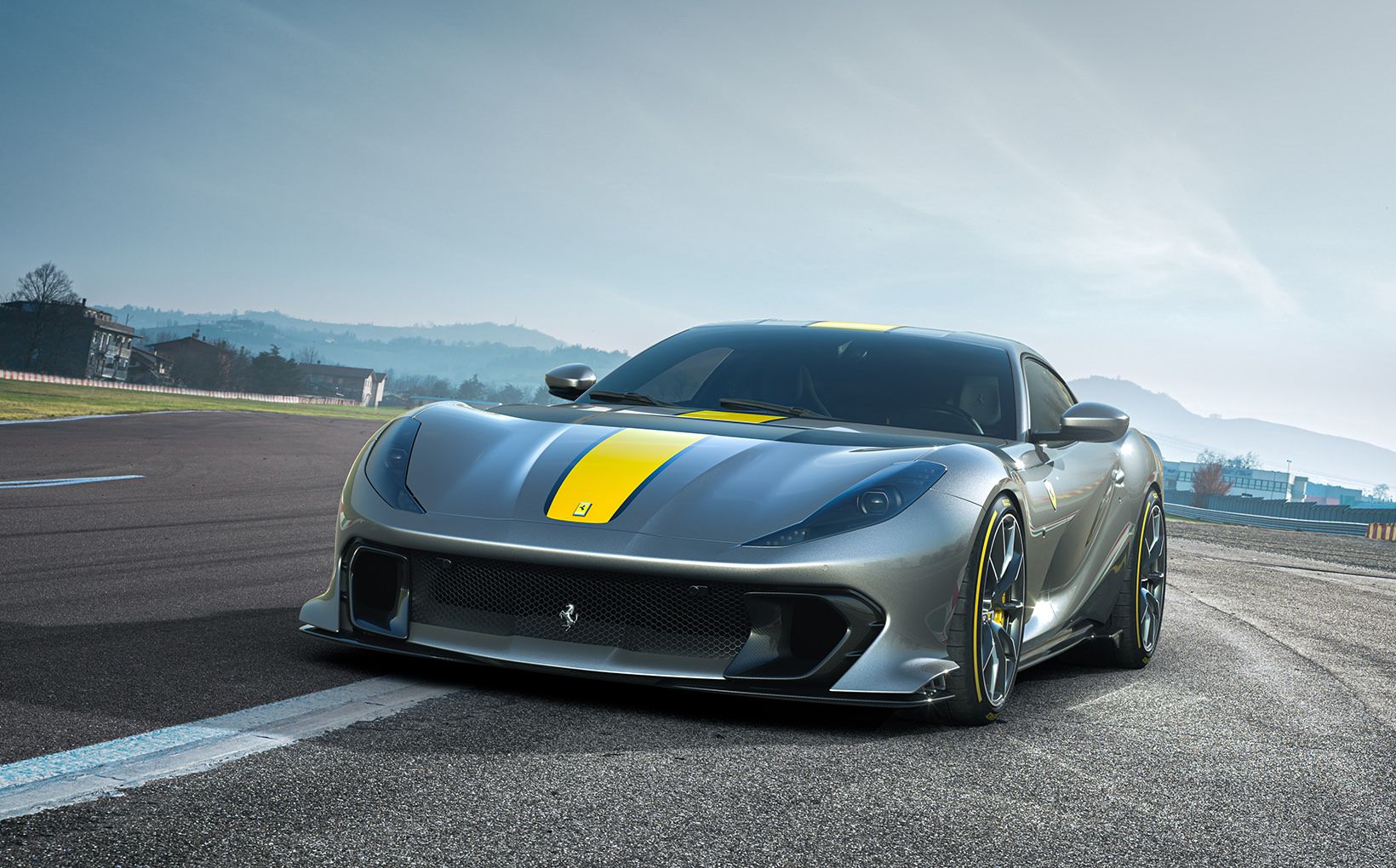 The 812 Competizione is the most savage Ferrari GT car to date.

Pretty quickly they both garnered a reputation for being pretty spikey when driven hard – the 599 GTO lapped the Fiorano test track a whole second quicker than the legendary Enzo supercar.

Just looking at the 812 Competizione, you know it’s going to be brutally fast and raucous… but then you read the spec sheets…

For reference, that’s 22kW more and 600rpm higher than the Superfast on which it’s based, but torque is down 26Nm. 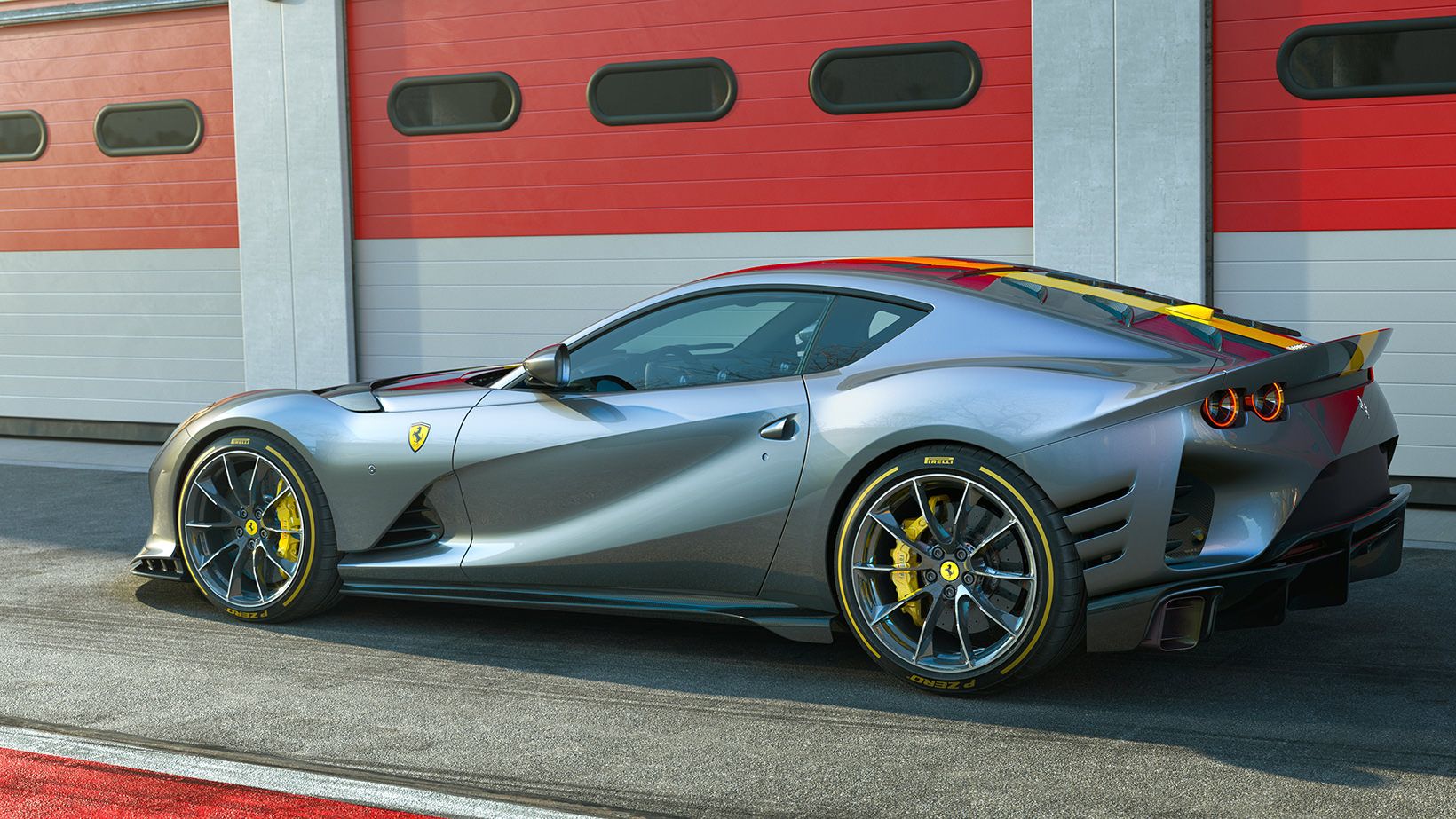 As usual for the flagship front-mounted 12-banger, all that fury is channelled exclusively to the rear wheels (via a seven-speed dual-clutch automatic transmission).

While the results may not initially speak for themselves in the standing start 0-100km/h times (2.85s vs 2.9s), the extra firepower and 38kg weight advantage start to shine more brightly as speeds build, with the Competizione beating the Superfast to 200km/h by almost half a second.

For many people that’s probably insignificant, but the 812 was already a blindingly quick car, and now the benchmark has been elevated.

But, the point of the Competizione isn’t to light up the drag strip, it’s to decimate the world’s racetracks and deliver an unparalleled driving experience within the Ferrari range. 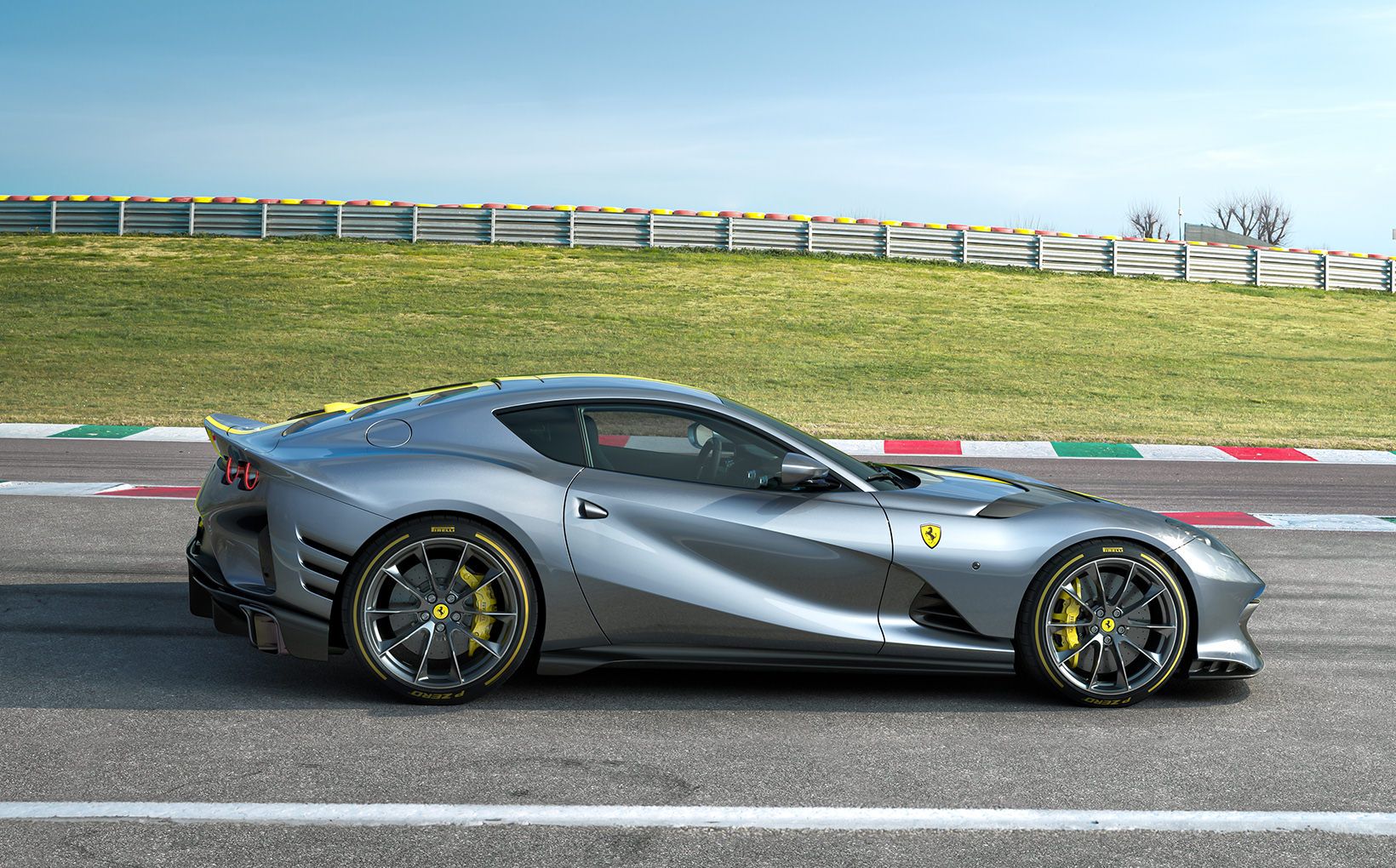 Less weight, more power, enhanced aero and more tech should make for a raw driving experience if ever there was one.

This is why the 812 was given a complete “aerodynamic redesign” with the goal of not only increasing downforce, but helping the special edition carve out an identity all of its own.

At the front, the main air dam has been widened, the chin extends lower and flaunts a new (more aggressive) splitter while the air channels skirting the inside of the headlights are notable only by their absence due to a new bonnet.

That new splitter is complemented down the flanks of the car by a matching set of carbon side skirts while the standard 20-inch alloy wheels have been swapped out for a set of all-carbon units.

At the rear, the integrated lip spoiler has been extended with the whole package sitting lower to the ground. 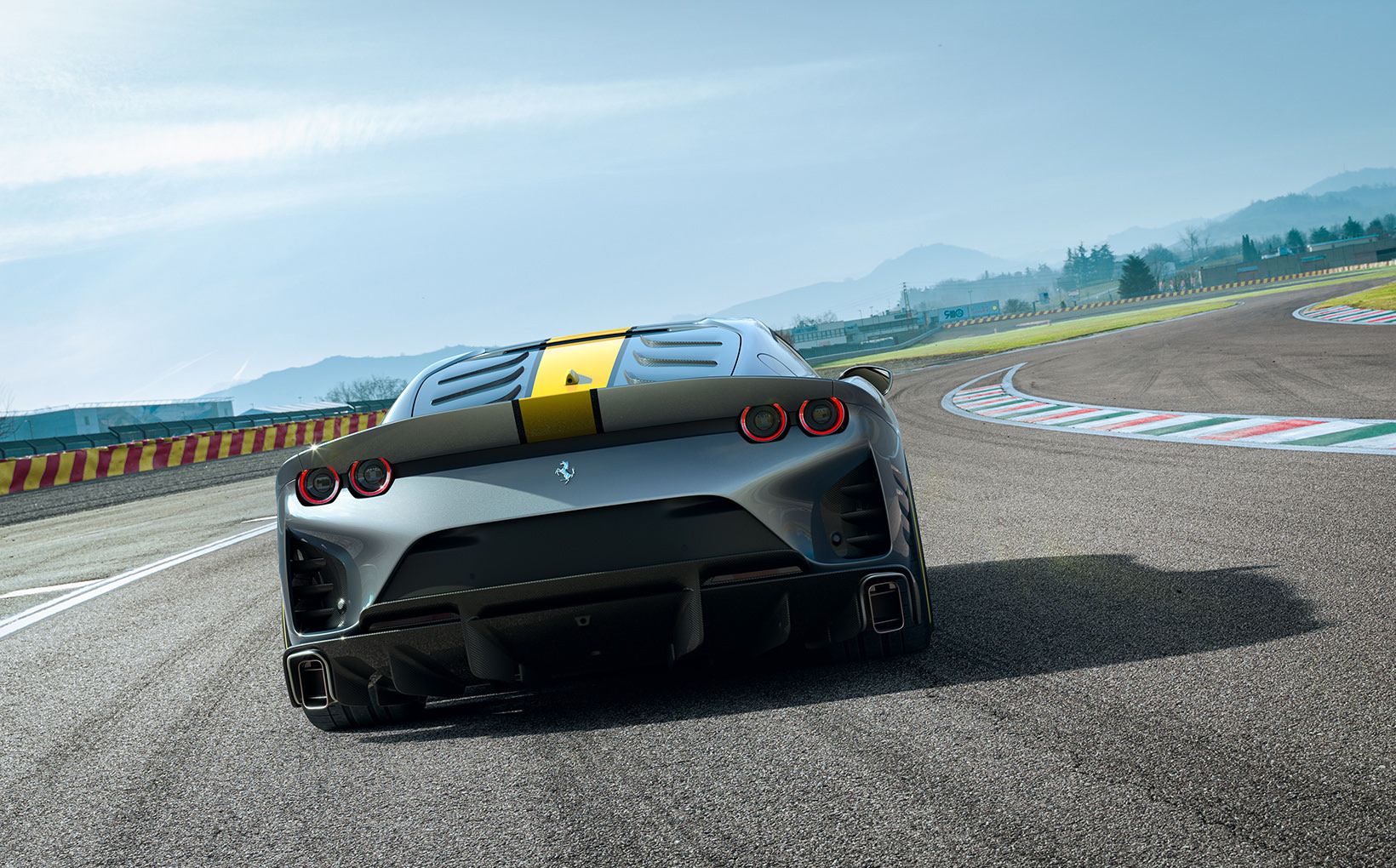 There’s an aerodynamic makeover, and then there’s a complete redesign.

In the place of the standard version’s rear window is a slatted piece of aluminium, the air vents adorning the boot lid are gone and the rear apron is dominated by a new full-width diffuser.

So it’s business as usual then in terms of both power and styling.

Lurking underneath that carbon-fibre body is the brand’s first-ever all-wheel-steering system, resulting in greatly enhanced cornering responses as well as the new seventh-generation Side Slip Control system to help keep the bespoke Michelin Cup2R tyres in check along with an electronic limited-slip differential.

As any even half-baked motorsport fan would attest to, braking is a key part of track performance which is why the Competizione has been gifted the ‘aero’ front brake callipers off the SF90 Stradale, clamping 398x38mm discs up front while the rear callipers grab slightly smaller 360x32mm rotors. 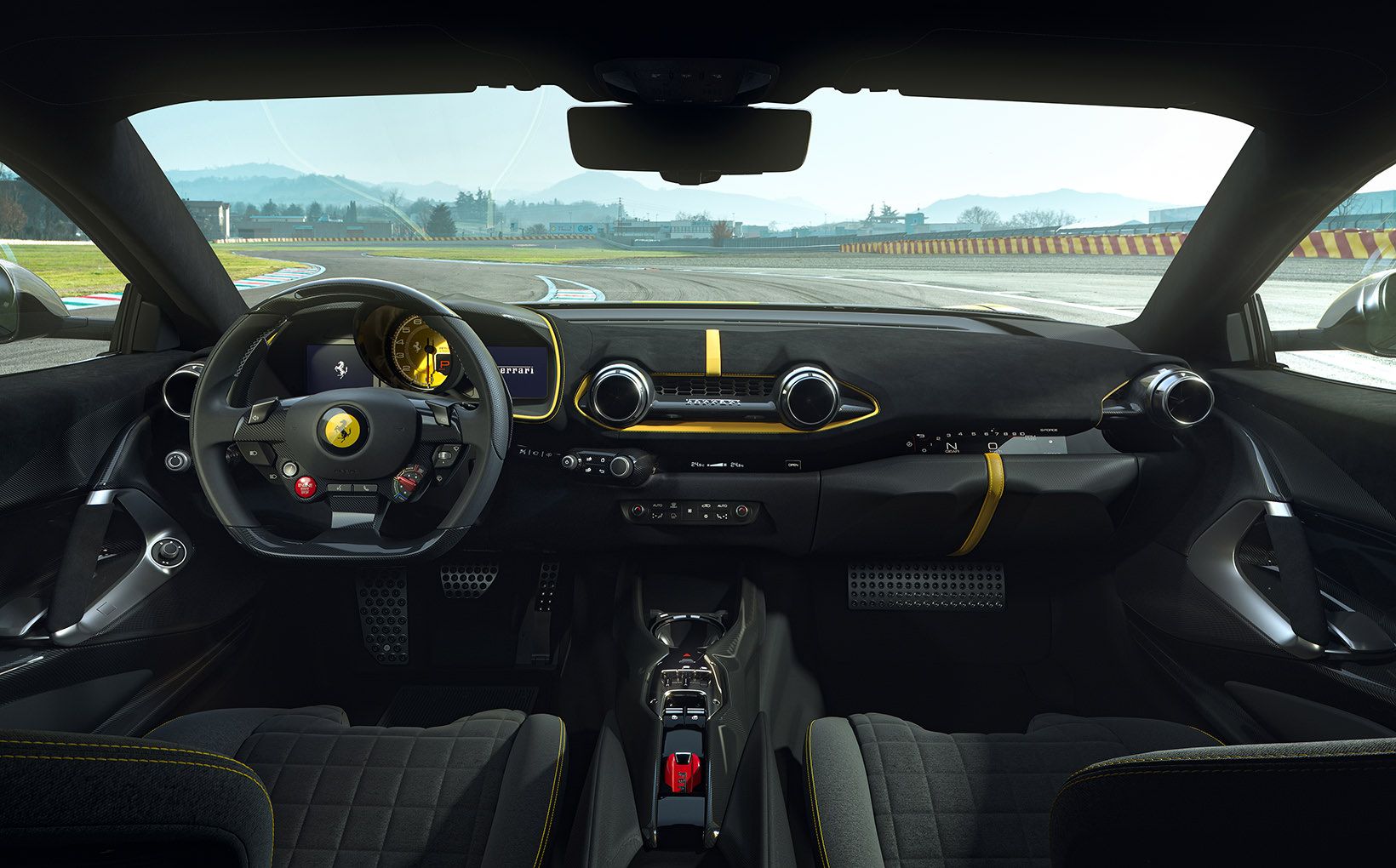 Ballistically fast but still comfortable enough to use on the street.

With the increased stopping power comes a greater need for better thermal management and so engineers have completely reworked and upgraded the brake ducting and cooling systems which work in tandem with the enhanced aerodynamics.

In stark contrast to the viscious exterior styling, the Competizione’s cabin has been left relatively untouched save for the lightened door panels and gear-gate centre console.

“The new model is the ultimate expression of Ferrari’s concept of an extreme front-engined berlinetta, honing the characteristics of the critically acclaimed 812 Superfast to a level never seen before,” Ferrari said in a statement last month when the car was first teased.

“The result is a car that encapsulates and epitomises the company’s 70-plus years of experience on the world’s circuits, drawing on its thoroughbred sportscar DNA to deliver a perfect marriage of performance, form, and function.” 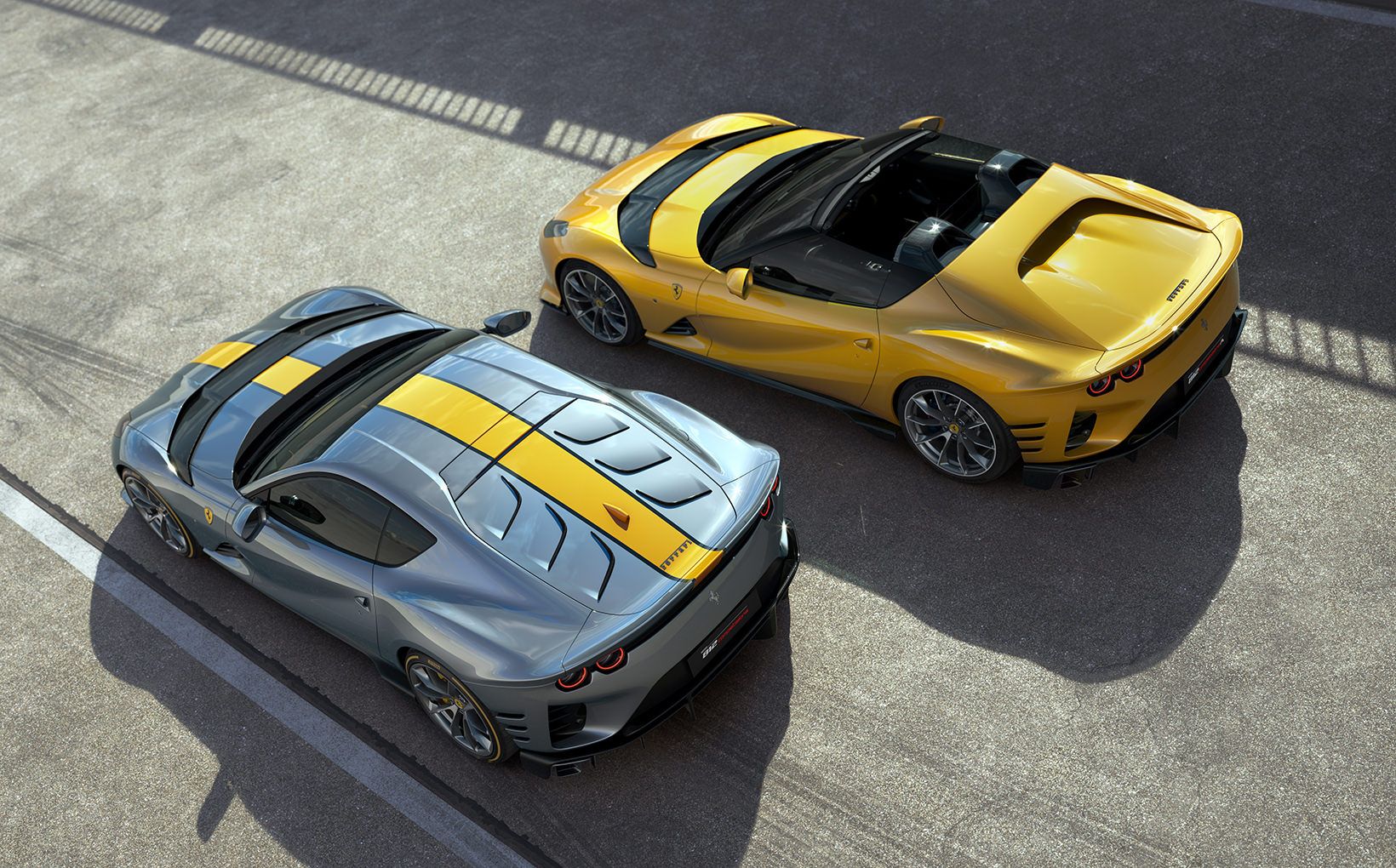 If you’re hard of hearing and want to experience the redline, go for the targa top.

For those of you currently salivating at the prospect of such a monster, brace yourself because it’s about to get even better… it also comes as a targa top.