Like many of us, you may be fascinated by the retro-inspired styling of the newly launched Ferrari Daytona SP3.

You may also admire the fact that it’s powered by the same naturally aspirated 6.5-litre V12 engine found in the 812 Competitizione and, you will probably love the fact that this exclusive model is one of just 599 examples available worldwide.

But, even if you desire all of those things so very, very dearly – and have an extra A$3.16 million sitting in your rainy-day fund – you’re plumb out of luck, because the Maranello-based company’s latest Icona-series high-performance supercar is completely sold out. 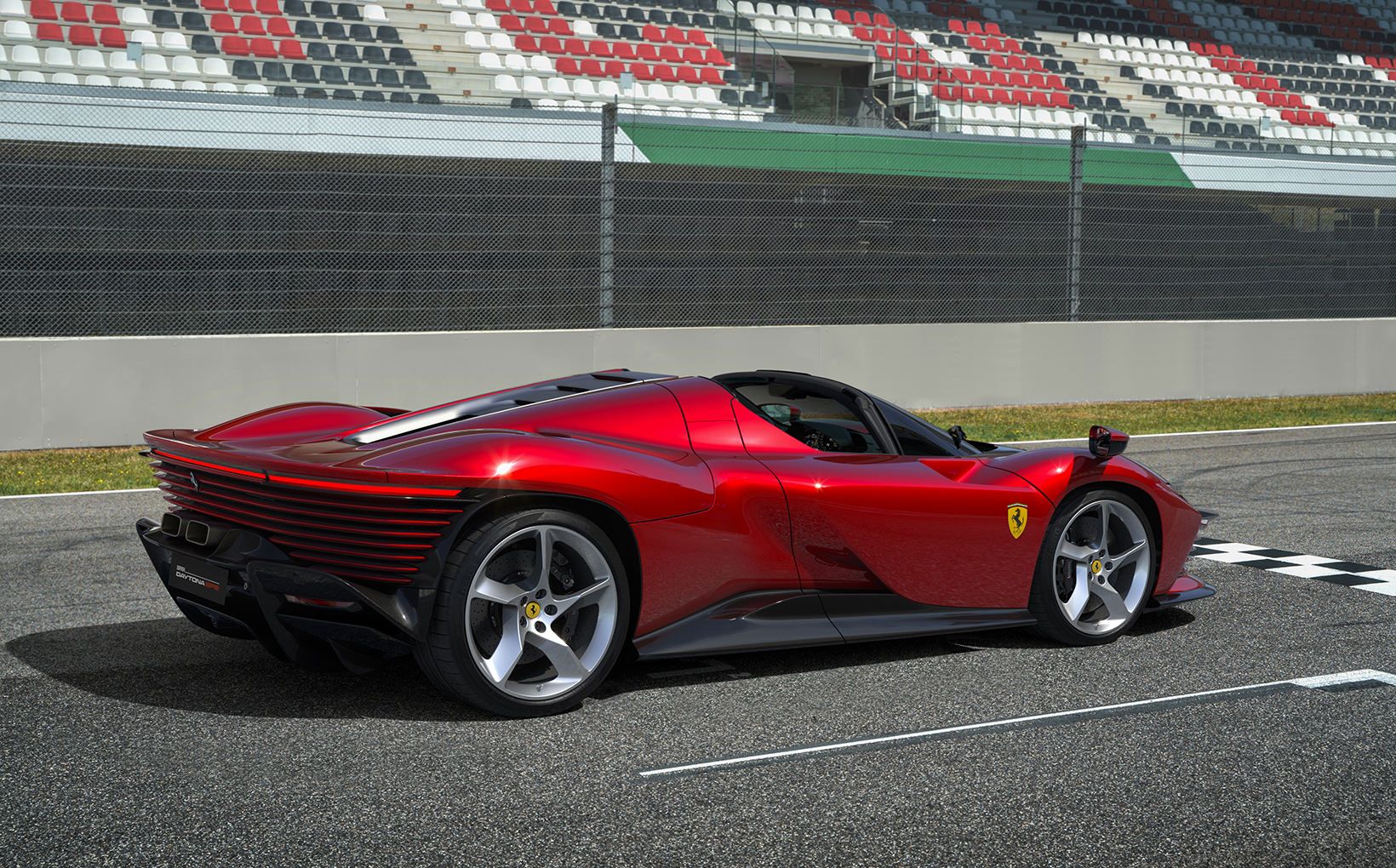 The Daytona SP3 is the most aerodynamically efficient road car Ferrari has ever built.

The limited-edition Daytona SP3 is the most aerodynamically efficient road car Ferrari has ever built. It makes use of passive aerodynamics to generate downforce; Ferrari’s chief technology officer, Michael Leiters, says the car produces approximately 227kg of downforce at 201km/h without the aid of any active aerodynamic devices.

Unveiled at this year’s Ferrari Finali Mondiali event in Mugello, the model pays tribute to the Prancing Horse’s historic one-two-three finish (with its 330 P3/4, 330 P4 and 412 P race cars) in the 1967 24 Hours of Daytona.

Its styling combines elements of historic as well as current Ferrari models including a low-set wraparound windscreen that pays homage to the P3/4 and double-crested front wings that reference models such as the 312 P, 512 S, and 712 Can Am. 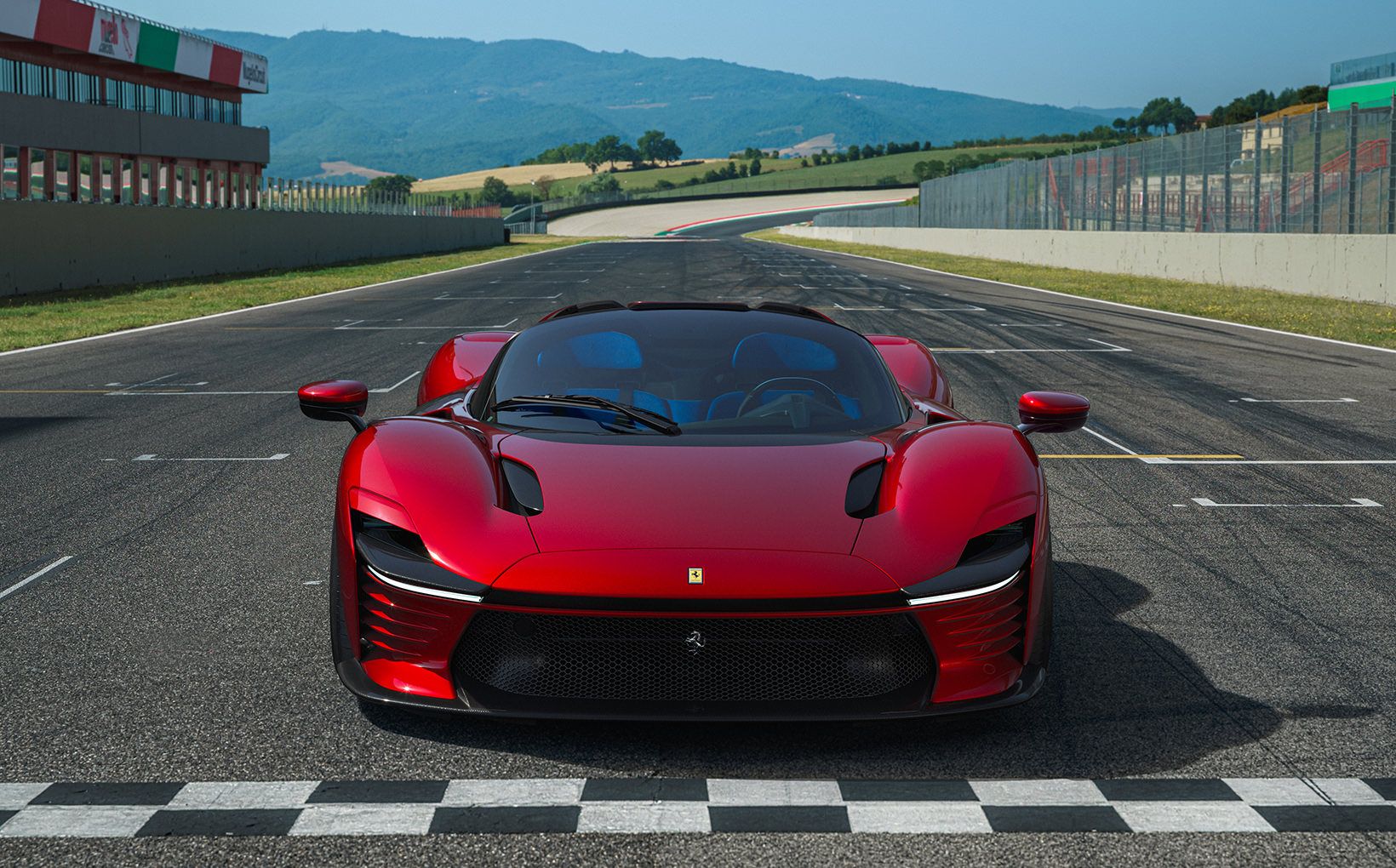 The airboxes are built into the SP3’s butterfly doors to channel air to the side-mounted radiators, while the wing mirrors are mounted on the front guards, just as they were on the 1966 330 P3.

The Daytona SP3’s rear-end design is distinguished by a stack of body-coloured and wraparound elements that sit beneath the light bar, into which the tail-light clusters are integrated. A pair of centrally mounted exhaust tips jut out above the dramatic diffuser.

The Ferrari Daytona SP3 is powered by the most potent naturally aspirated V12 engine in the Italian firm’s arsenal – it’s the most powerful non-electrified model it has ever produced. Sadly, it may also be the last Ferrari engine we’ll ever see without hybridisation or turbocharging. 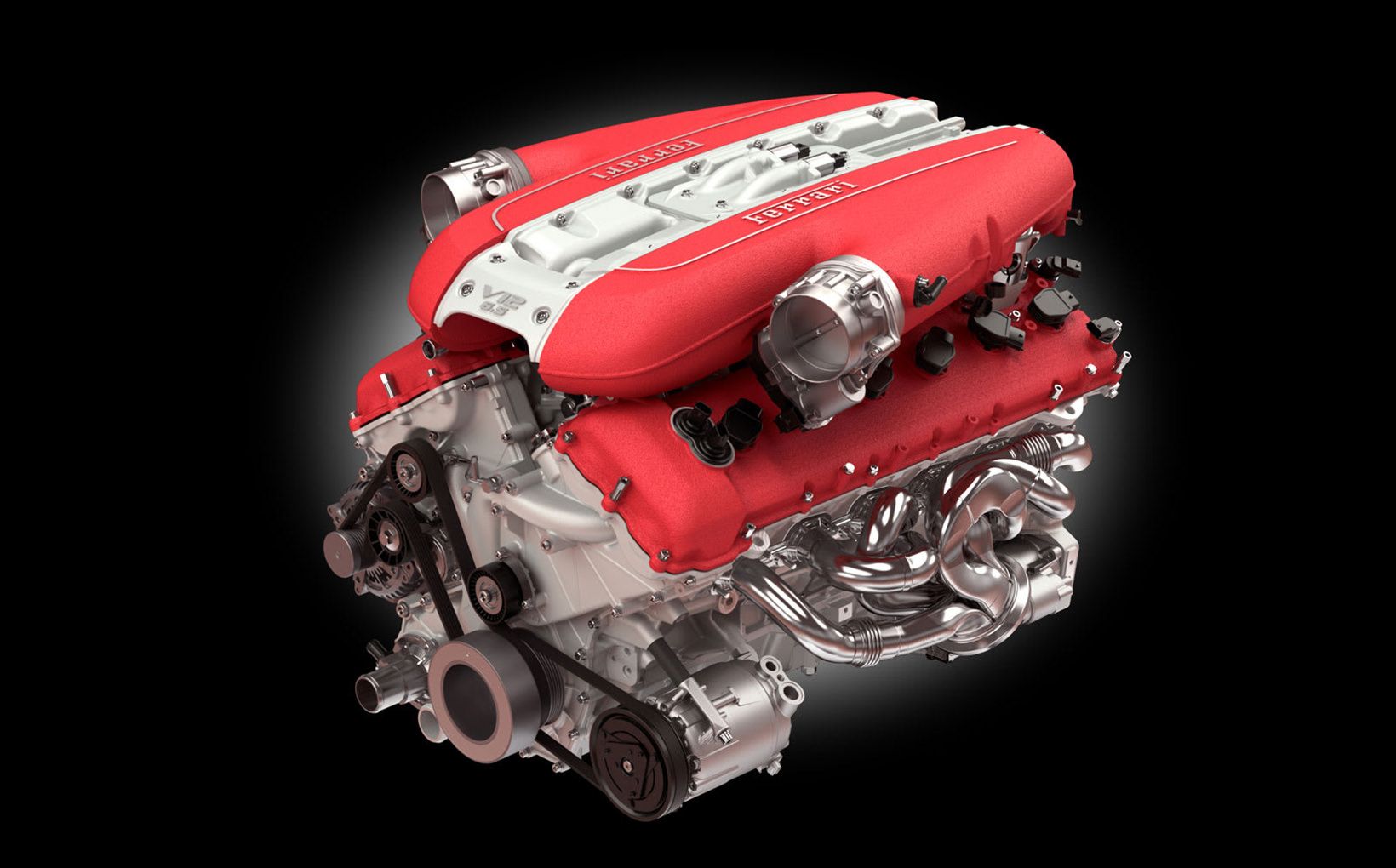 It is paired with an upgraded seven-speed dual-clutch transmission, which is said to be capable of executing a gearshift in as little as 200 milliseconds. 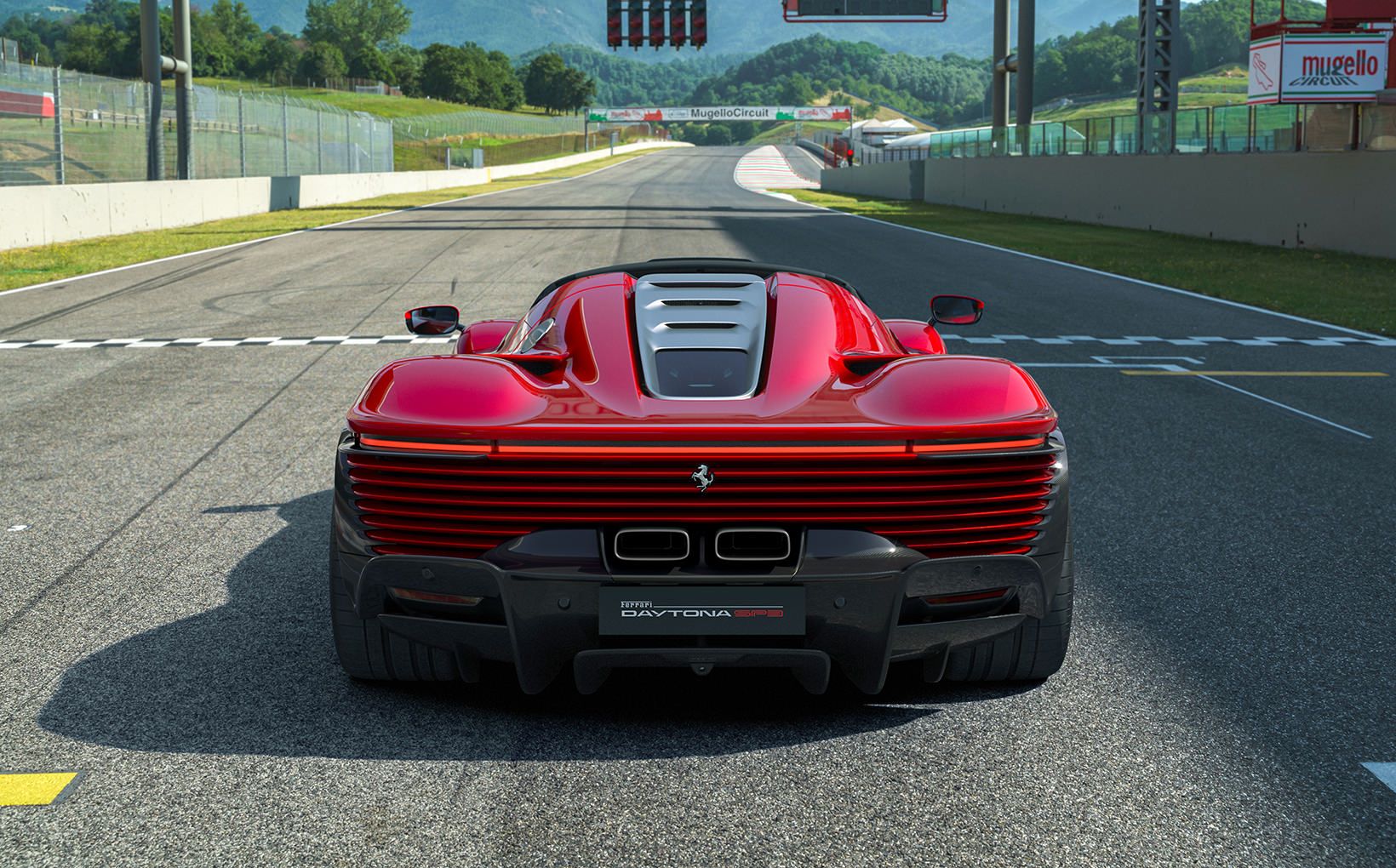 The tail-lights are integrated into a series of horizontal wrap-around elements.

The Daytona SP3 is based on the same platform that underpins the LaFerrari and features a carbon-fibre body shell with removable “Aperta” (open style) roof panels.

The extensive use of lightweight composite materials means the SP3 has a dry weight of just 1485kg – giving it an old-school power-to-weight ratio of 566hp to the ton – while its mid-engine configuration facilitates a front-to-rear weight distribution ratio of 44:56.

In addition, the newcomer comes shod with (bespoke to the model) Pirelli P Zero Corsa tyres – 265/30 ZR 20 at the front and 345/30 ZR 21 at the rear – and a new Dynamic Enhancer function, which controls pressure on the Brembo-supplied brake callipers under hard cornering.

The brake rotors are massive – they measure 398mm on the front axle and 380mm at the rear. 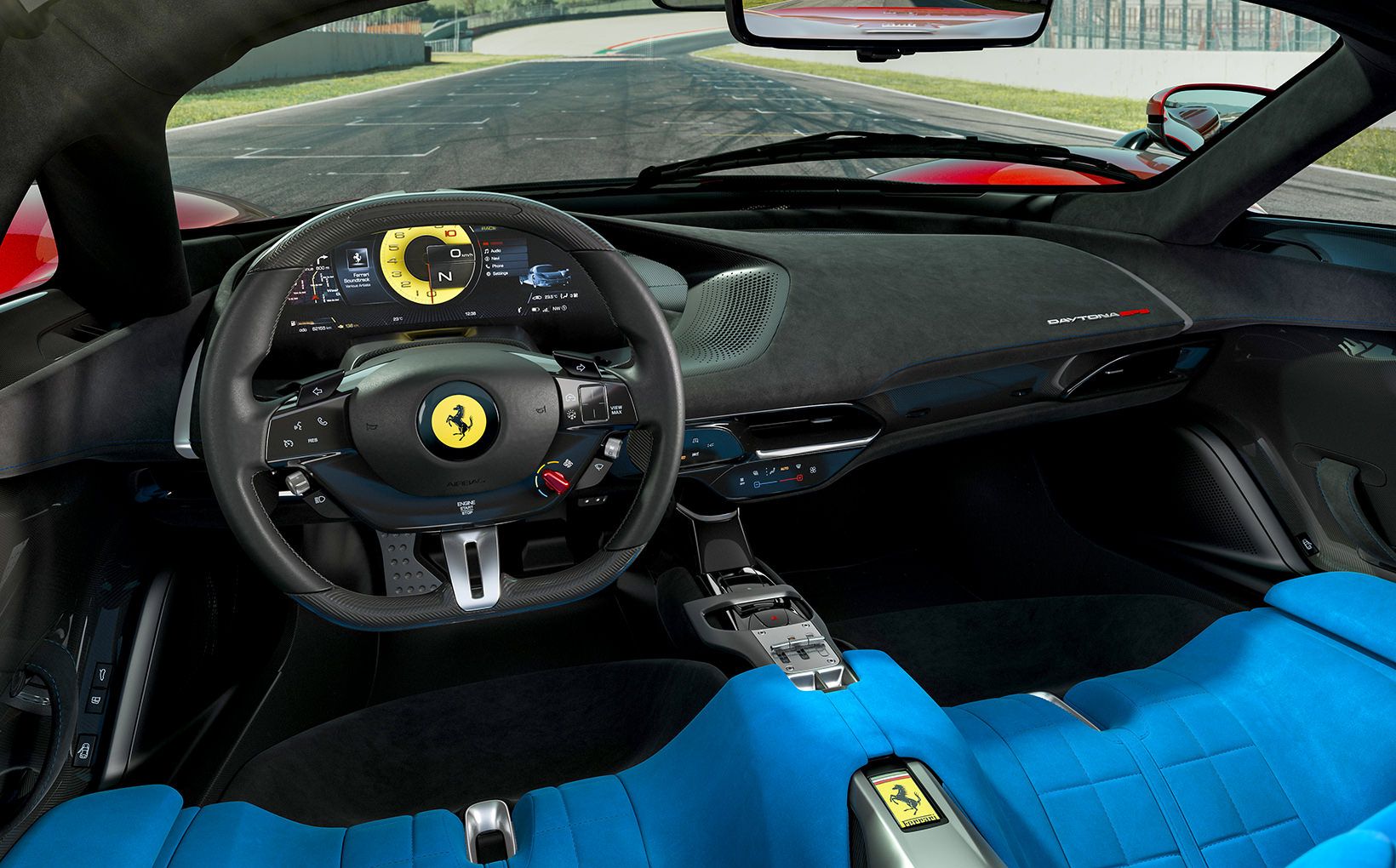 The seats of the Daytona SP3 sit lower than in any other Ferrari road car.

Inside, the driver and passenger sit lower and more reclined than in any other Ferrari road car. The two-piece seats are non-adjustable and their buckets and headrests are separate units.

Ferrari affixed the seats directly to the Daytona SP3's chassis, but the pedal box can slide fore and aft to compensate for drivers of differing heights. The steering column offers tilt-adjustment only.

The lower half of the carbon-fibre dashboard integrates Ferrari’s Human-Machine Interface (HMI) touch controls, which allows the driver to keep their hands on the steering wheel to control 80 per cent of the vehicle’s functions. 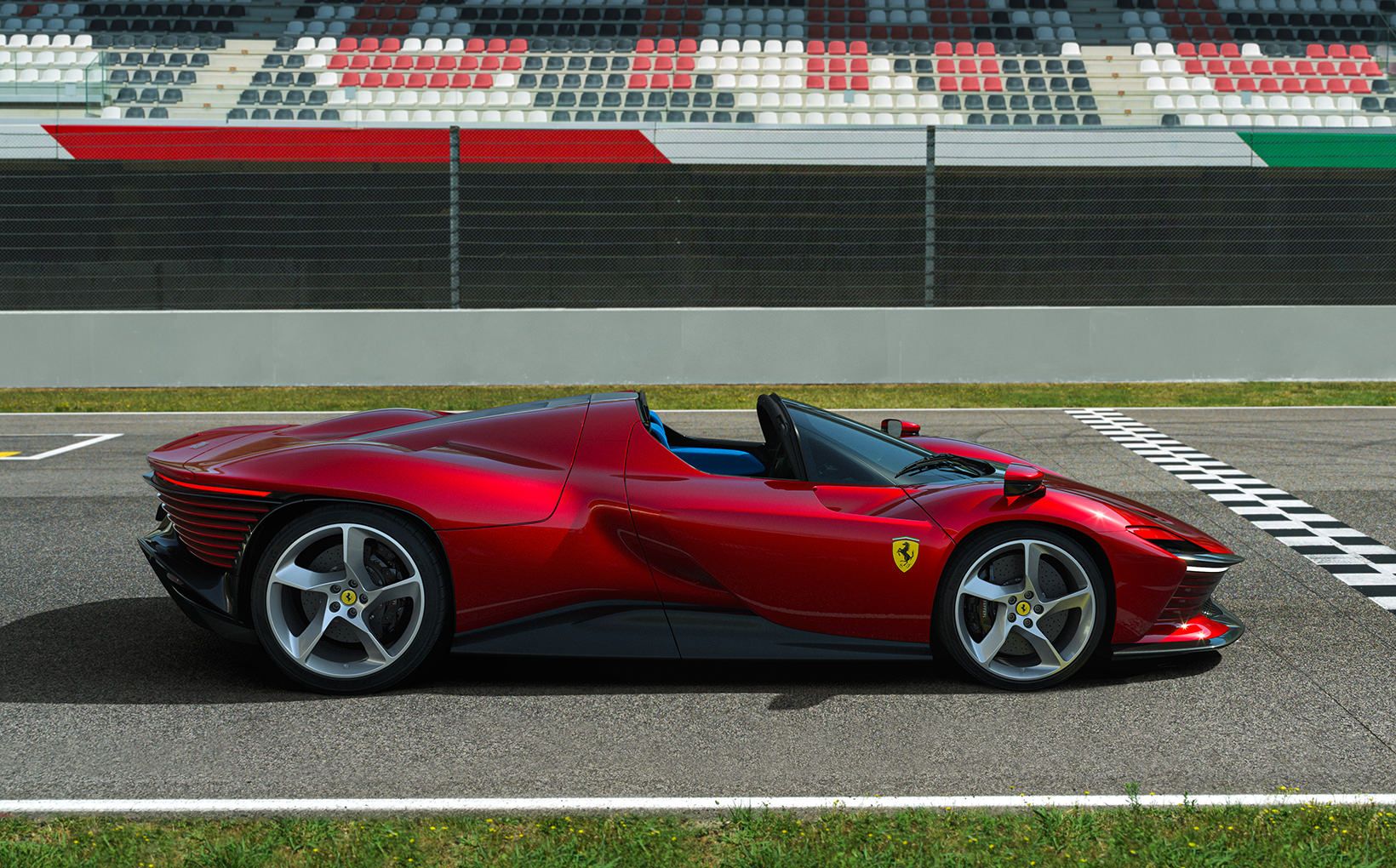 There’s no doubting that the Daytona SP3 is a future classic.

The minimalistic interior includes an LED display for data and telemetry and a 16.0-inch curved HD screen which “instantly relays all driving-related information”, Ferrari says.

The centre console design is inspired by the gated manual-transmission shifter of classic Ferrari models, while the carbon-fibre D-shaped steering wheel is said to be an advanced version of that fitted to the new Roma. The steering wheel retains the traditional Manettino dial for the selection of various driving modes and incorporates an LED gearshift strip at the 12 o’clock position.

Ferrari's head of sales and marketing, Enrico Galliera, confirmed that all 599 examples of the Daytona SP3 were pre-sold by invitation before manufacturing of the latest Icona-series model even began. He said 499 units were purchased by Monza SP1 and SP2 owners with the remaining 100 examples sold to private collectors who own previous limited-edition Ferraris.