FERRARI, the renowned Maranello supercar maker, has bolstered its GT car line-up with the addition of the $409,888 (plus on-roads) Roma, an all-paw, V8-powered coupe designed to turn even the longest journey into a piece of cake.

Already boasting a 12-month waiting list, the new Roma is unquestionably a pretty and desirable thing, even if it does bear a striking resemblance to the current Aston Martin Vantage…

As the Prancing Horse’s second-most affordable car after the $398,888 Portofino convertible, it’s little wonder Australia’s wealthy motoring fans are lining up in droves to secure their example, especially seeing as its twin-turbocharged 3.9-litre V8 engine is tuned to produce 456kW of power and 760Nm. 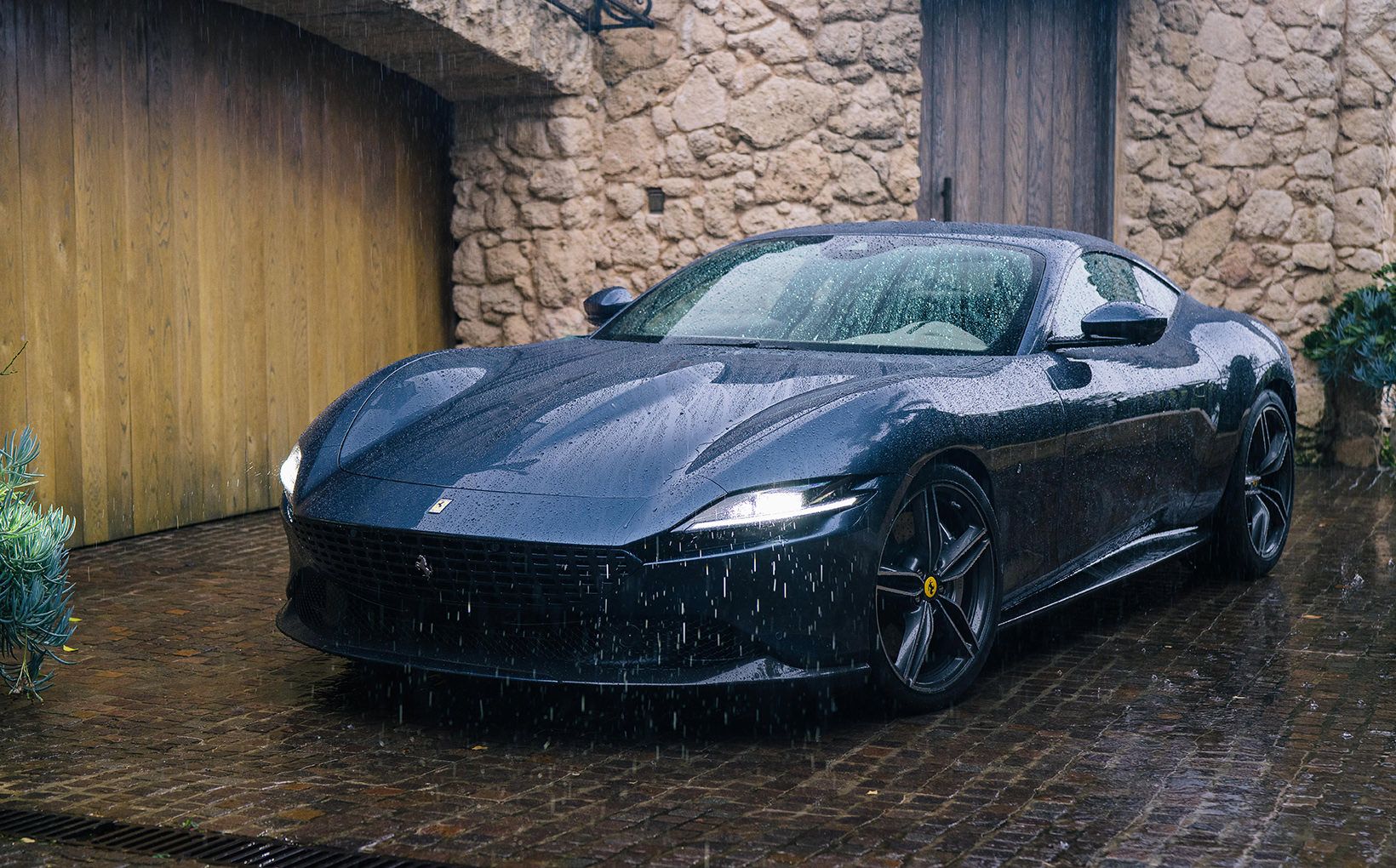 All this grunt combines with all-wheel-drive and a speedy eight-speed dual-clutch automatic transmission to dispatch in 0-100km/h in 3.4 seconds, 200km/h in 9.3 seconds and power the Roma onto a top speed of 320km/h.

Briefly back on cost, the Roma’s sticker price throws the Aston Martin DB11 range firmly in the firing line, undercutting the flagship AMR by more than $27,000 while near enough matching it on grunt – the AMR’s force-fed 5.2-litre V12 churns out 470kW/700Nm.

In terms of styling, the new Roma marks the start of something different for Ferrari, ushering in a new design language where it seems minimalism is the key with almost every line being curvaceous and elegant with no gaping intakes or vents to be seen anywhere. 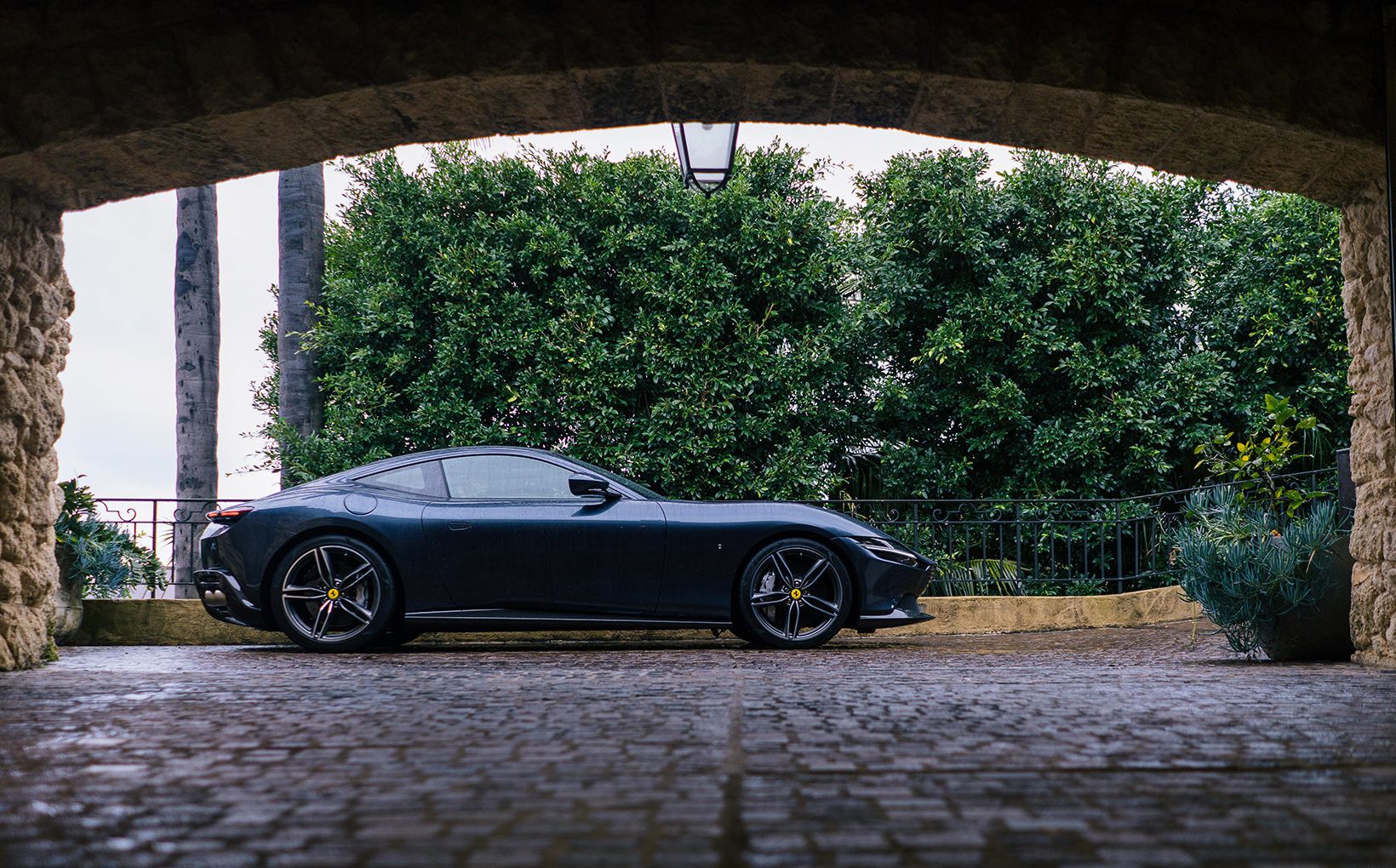 More than a few people have drawn parallels between the Roma and Aston Martin Vantage in terms of styling.

The grille is even finished in the same colour as the body and hidden beneath a sharp contour line – perhaps the only sharp line on the entire body besides the boot line.

The headlights are narrow and small, nestled into the front of the subtly bulging wheelarches while the tail-lights are little more than thin LED strips.

As an entire package, the Roma isn’t menacing to look at – rather, it exudes a quiet surety that while it may not shout about it, it is definitely a performance car with a lot of poke under the bonnet. 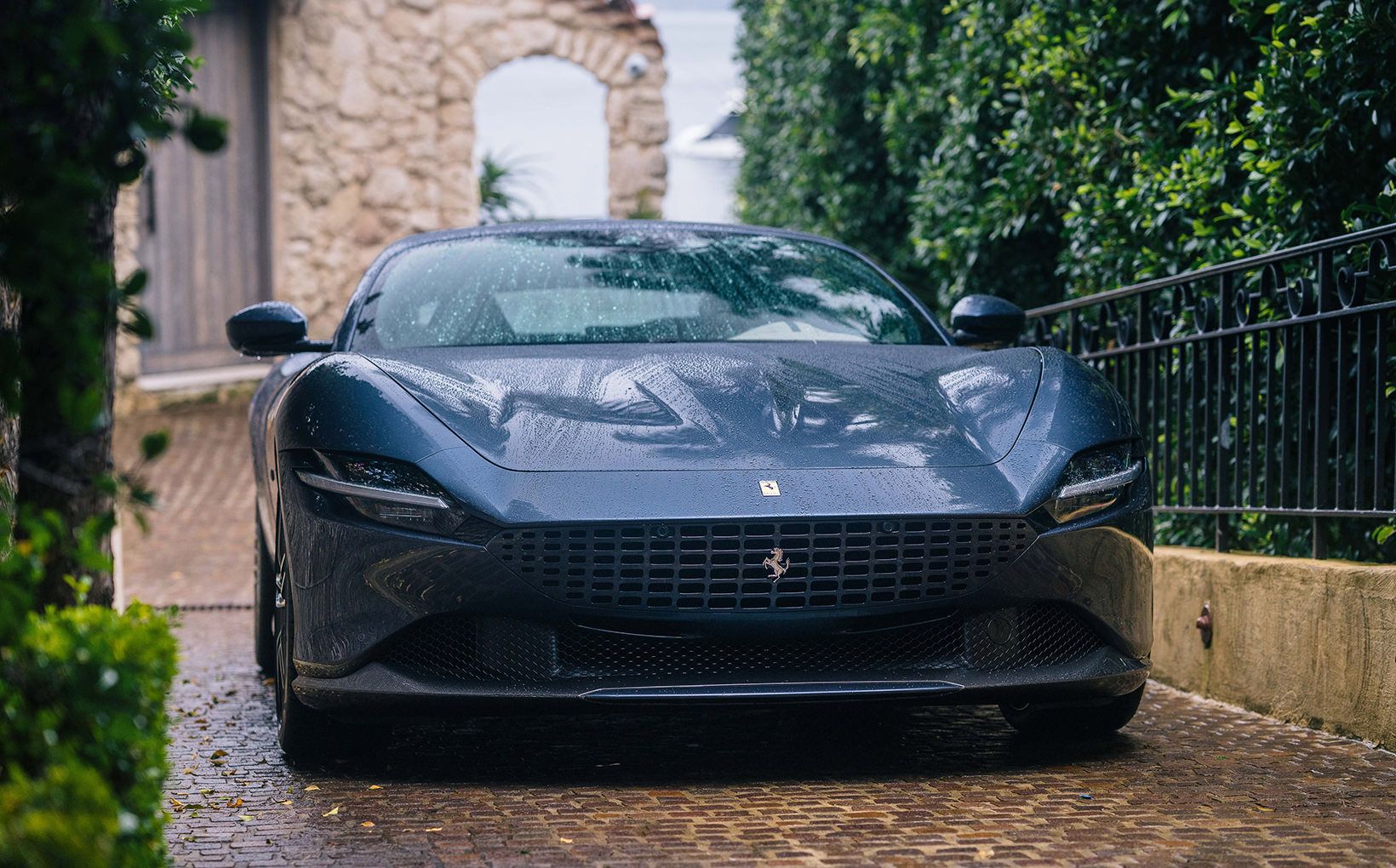 While subtle in style, its performance is far from plain.

Inside the cabin, the elegant theme is continued with a more subdued layout and finish compared to the more driver-focused arrangements of its mid-engine cars or monster V12s.

Frau leather, Alcantara, chromed aluminium and carbon-fibre have all been used throughout while the metal gear lever gate of yesteryear has been referenced through a new metal plate housing for its F1 controls.

As usual for Ferrari, the steering wheel features a raft of controls that allow the driver to control and adjust numerous functions without ever taking their hands entirely off it. 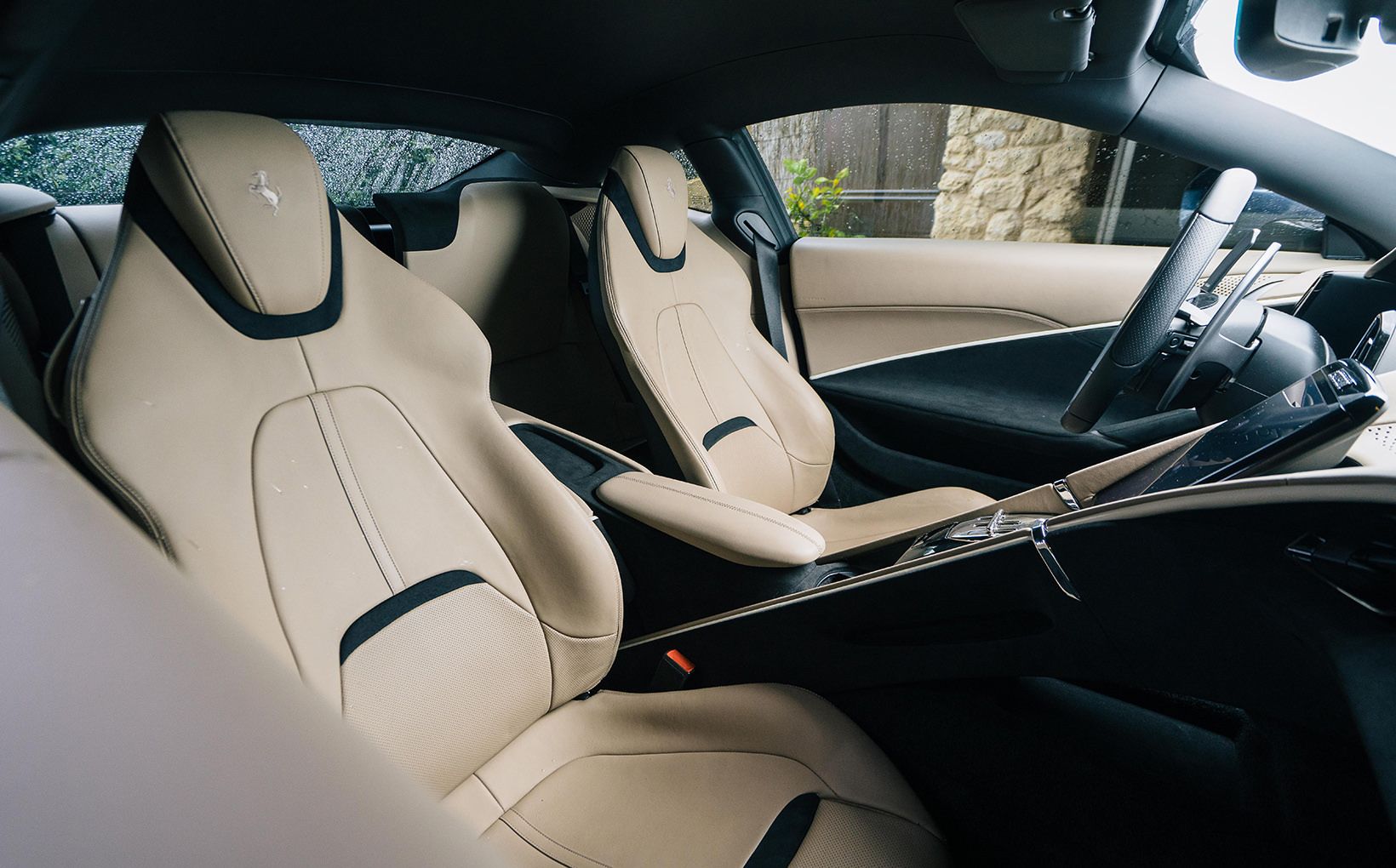 There is a far more relaxed approach in the Roma’s interior than in the supercars.

The instrument cluster meanwhile, pretty much like every other premium car these days, is a digital affair, measuring 16 inches in diameter with an abundance of personalisation settings available to tinker with.

Still in keeping with the motorsport heritage that effectively is Ferrari, the Roma also scores an optional 8.8-inch colour head-up display while the infotainment system is accessed via a GT-car-appropriate 8.4-inch touchscreen.

While undoubtedly a GT car and marketed technically as a four-seater, there wouldn’t be much point trying to fit anybody in the rear seats, not least because of the sloping roofline, but also the sheer lack of room due to the cab-back design, as is usually the way with 2+2 arrangements. 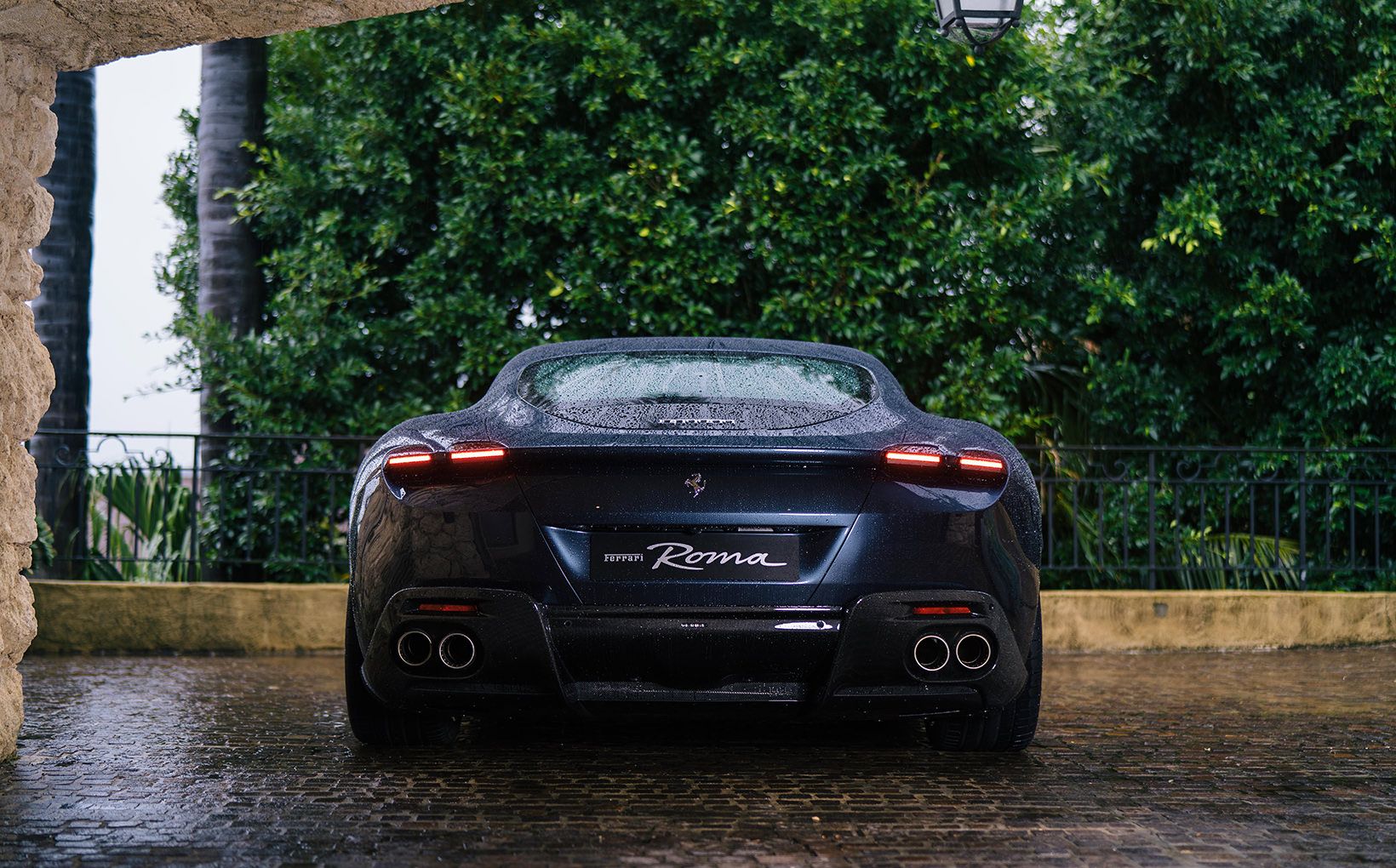 Those hoping to secure their own Roma will have to wait more than a year to get it.

In modern terms, the Roma is the third model of its kind for Ferrari, that being a front-engined V8 aimed more at the grand touring market than outright performance.

Its family tree sprouted with the California convertible back in 2008.

Powered by a 4.3-litre naturally aspirated V8, the California was aimed squarely at the Aston Martin DBS of the time with its party piece being its metal folding roof – no coupe was offered. 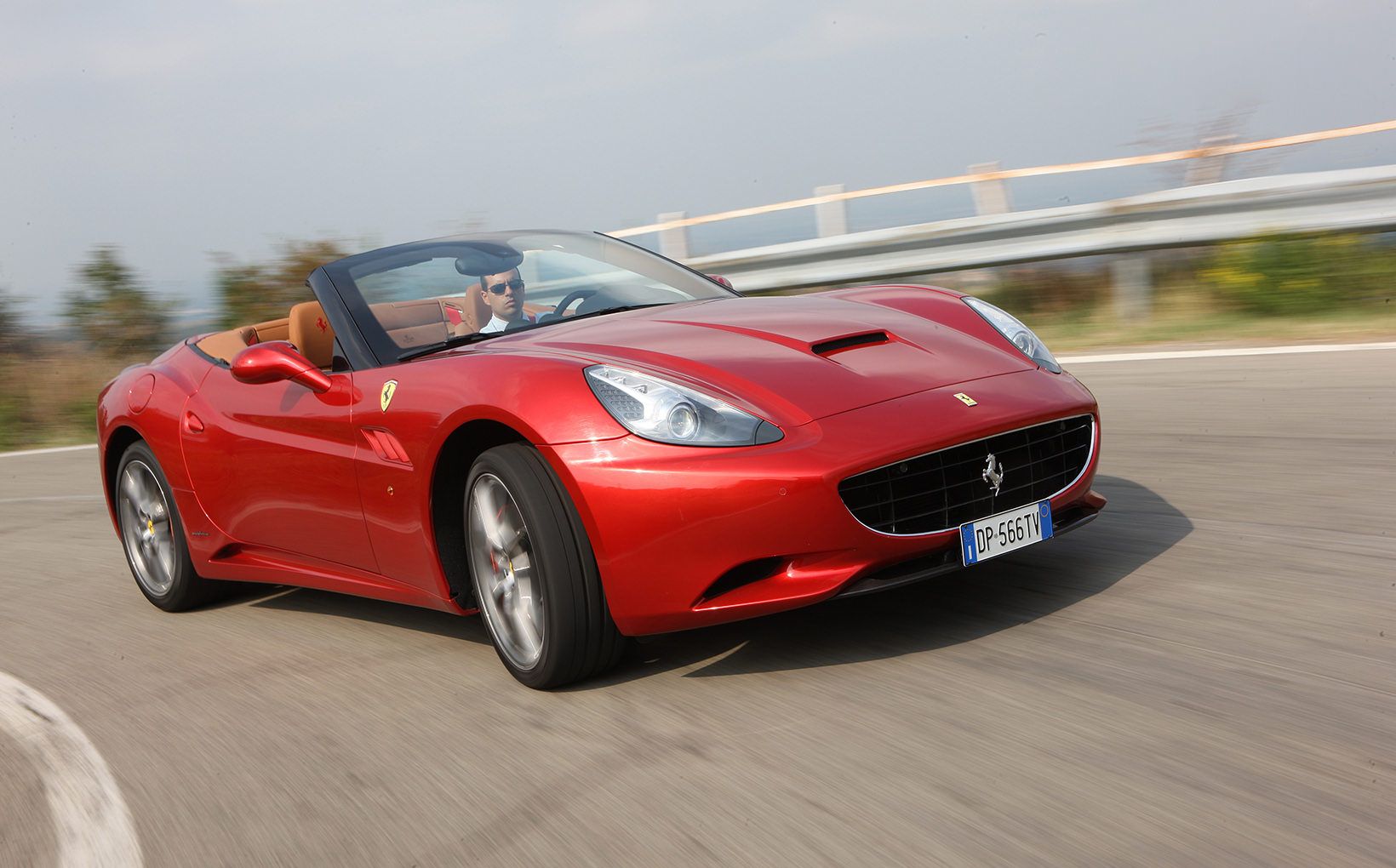 The California is the spiritual ancestor of the Roma.

When it came out, it was the first Ferrari with a front-mounted V8, the first to feature a 7-speed dual-clutch transmission, the first convertible with a folding metal roof, multi-link rear suspension and the first with direct petrol injection.

This same basic engine was then carried over – albeit tweaked a refined – into the succeeding Portofino in 2017, continued the California’s front-mounted V8 convertible recipe. 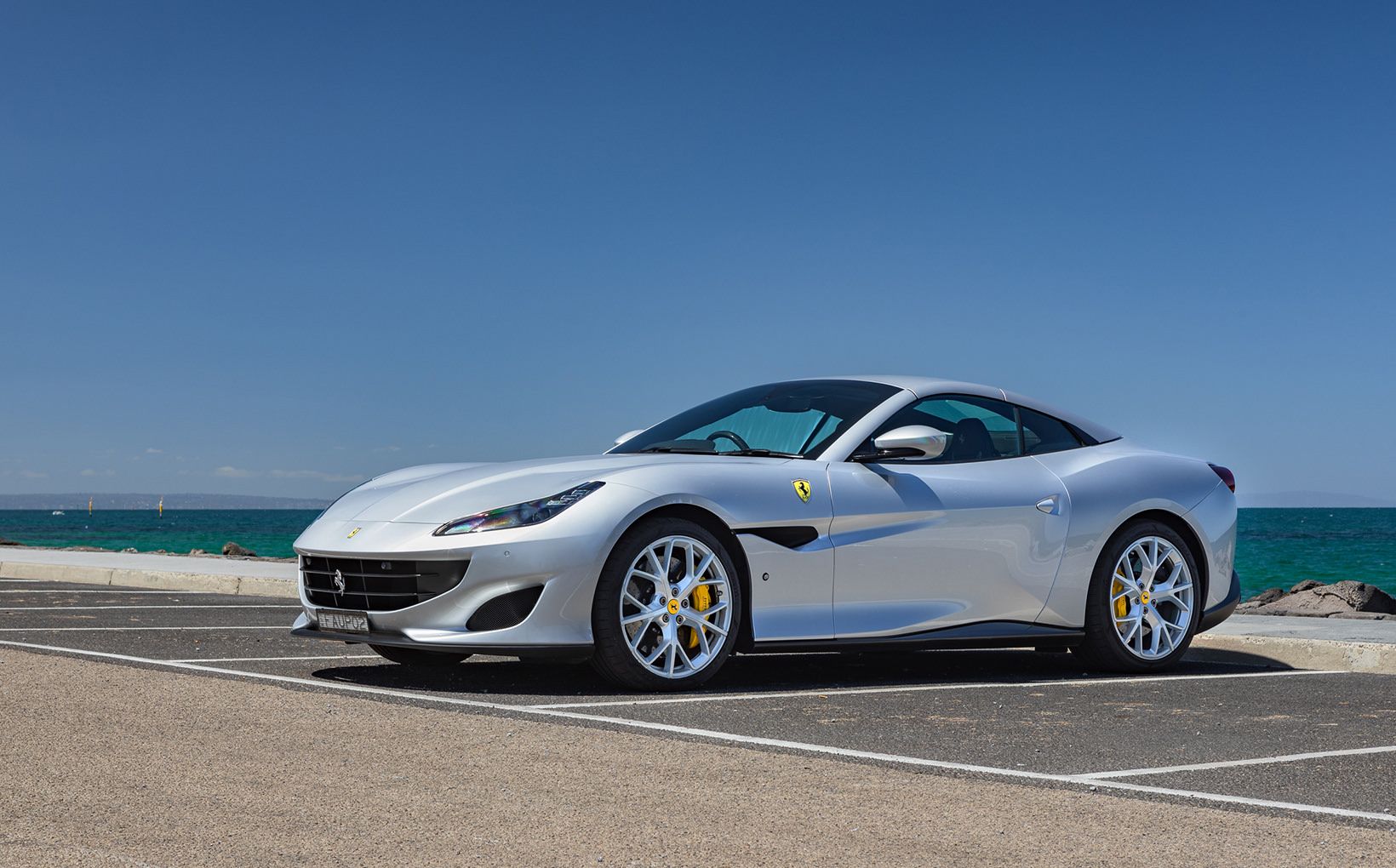 The Roma builds on the foundations laid out by Portofino convertible.

With the Portofino still on sale today, it makes sense that the Roma scores a tickled-up version of the same powerplant, expanding on the California’s legacy to be the first Ferrari coupe with a front-mounted V8.