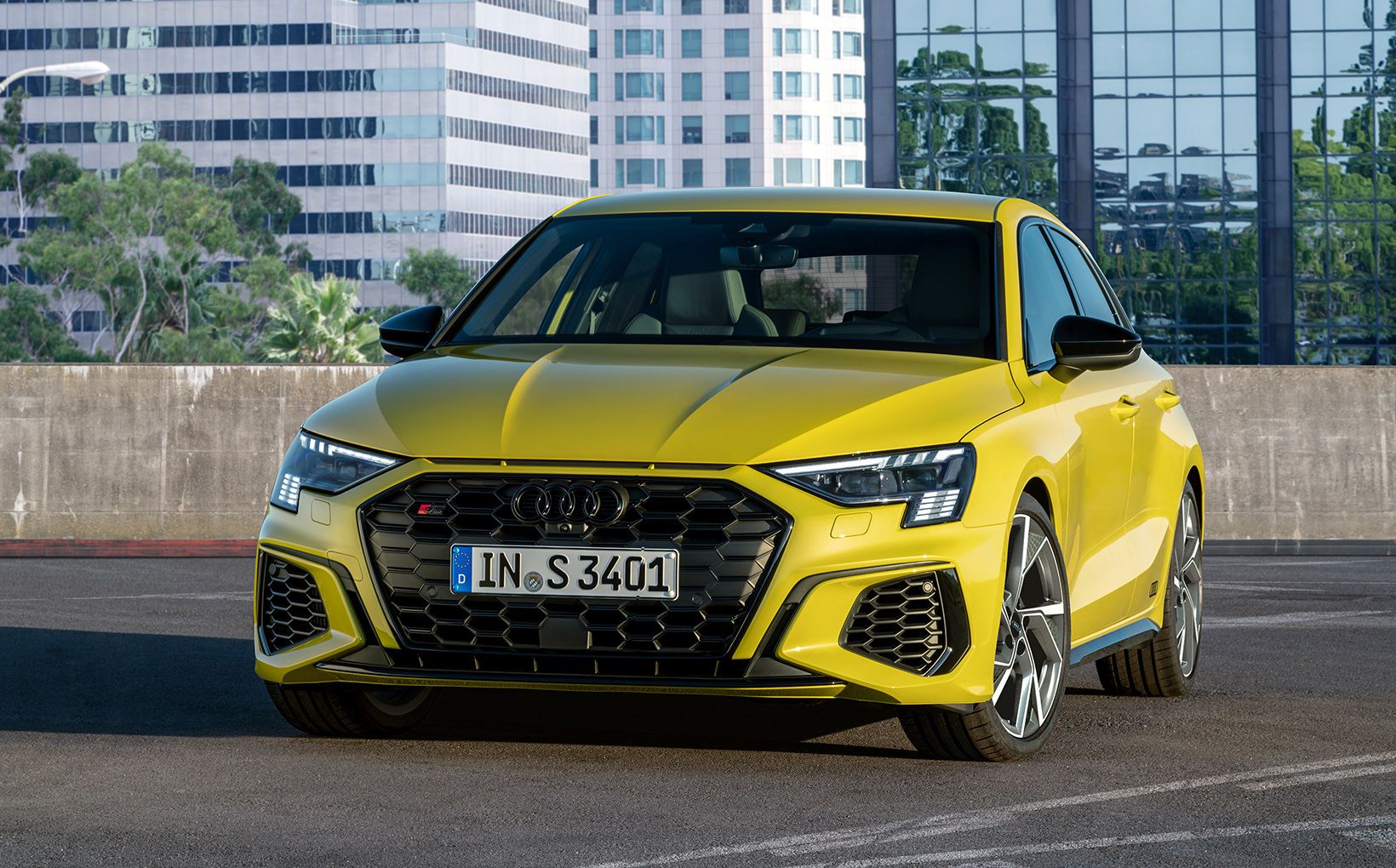 The Audi S3 may be Audi’s second-tier hot hatch, but it will still show a clean set of pipes to the mainstream offerings.

AS alluded to back in July with our RS3 report, Audi is one of the leading lights of the hot hatchback market, but not everybody has $80-100k to spend on a fire-breathing supercar muncher.

Happily, Audi also makes the S3 for those who don’t want to drop that sort of money on the second-smallest car in the range but still want a good dose of performance and practicality.

Priced from $69,900 and $72,400 plus on-road costs respectively, the latest S3 Sportback and sedan duo are on their way to Australian shores and while they may not be hardcore track devourers, they’ll still serve more power and performance than your average Hyundai i30 N or Volkswagen Golf GTI.

Powered by an uprated turbocharged 2.0-litre four-cylinder petrol engine shared with the Golf R, the new S3 punches out 228kW/400Nm which, as usual, is sent to all four wheels via a seven-speed dual-clutch automatic transmission. 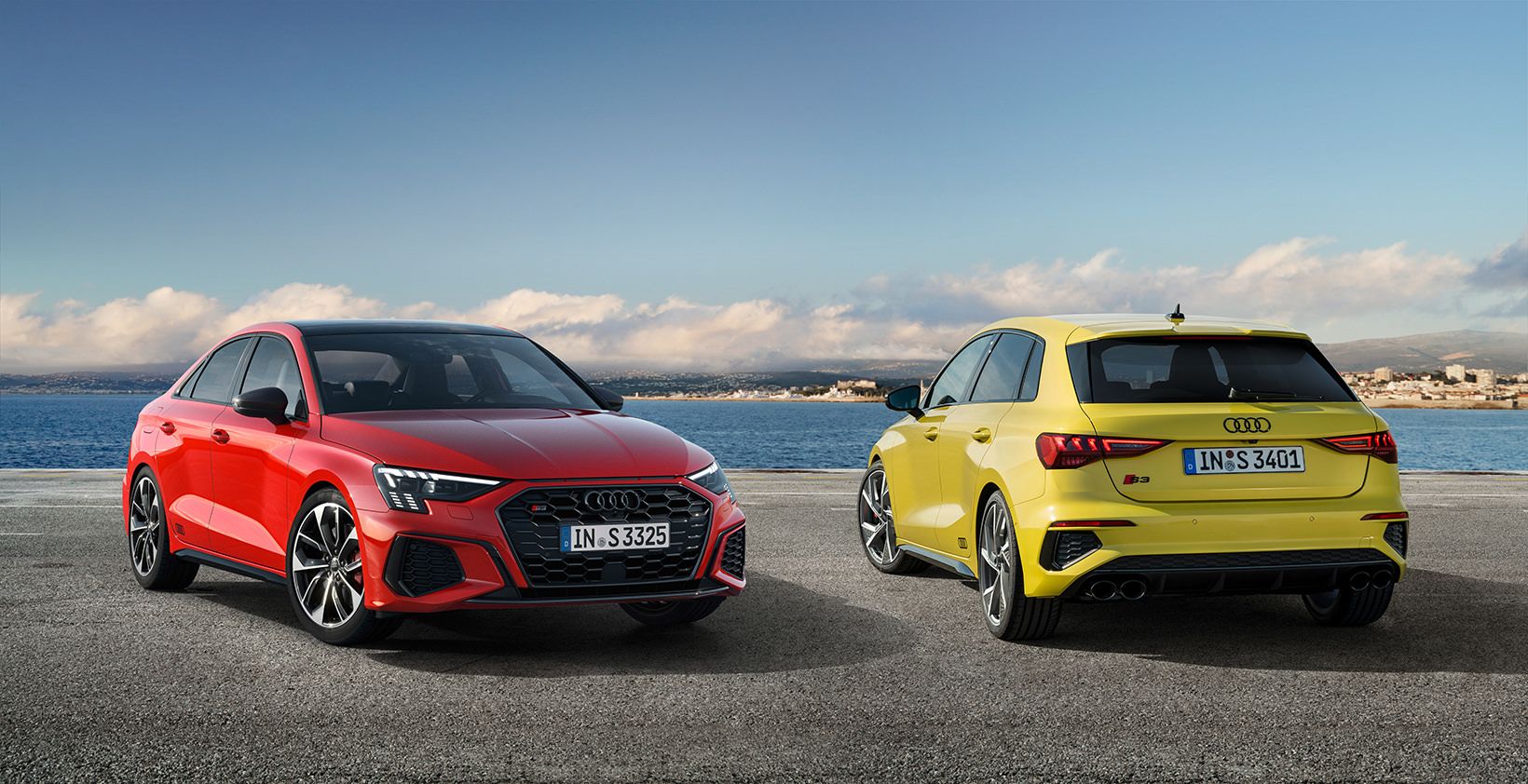 Just like the RS3, both Sportback (hatch) and sedan body styles are being offered.

For all the numbers fans out there, maximum power is developed at 5450rpm and stays on song right up to the 6500rpm redline, while peak torque on tap from 2000-5450rpm which should deliver delectably linear and useable performance.

In terms of outright figures, 0-100km/h is up in a claimed 4.8 seconds, nicely splitting the difference between the unhinged RS3 and the more mainstream offerings like the aforementioned i30 N and Golf GTI.

What’s more impressive though is that even with this level of performance available, Audi says the S3 will only consume between 7.3-7.4 litres of premium unleaded per 100km on the combined cycle, however repeated launches and spirited fangs will obviously drive that number up…

Helping the all-wheel-drive terror off the line is a set of fat (for the size of the car) 235/35 wrapped around aggressively styled R19 tyres, with subdued aggression being the overall theme of the whole package. 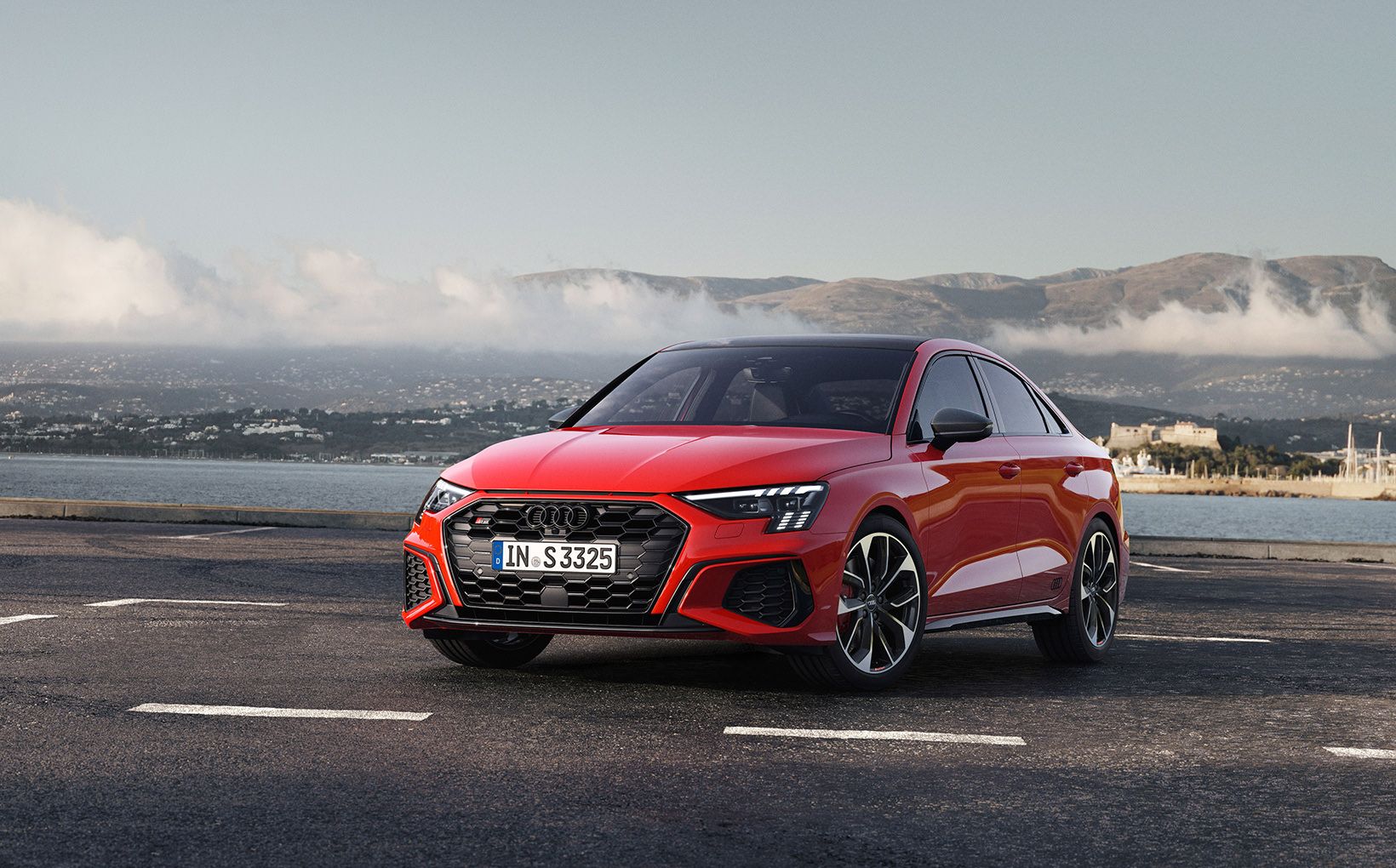 You’d be hard pressed to mistake the S3 for a normal A3, but it’s still more restrained than the bonkers RS3.

Whereas the RS3 announces its identity to the world courtesy of its lairy body kit, intense alloys wheel design, massive brakes and raucous exhaust note – among other things – the S3 is a little more restrained…but not by too much.

All the vents and grilles are bigger than on a standard A3 and all finished with black honeycomb mesh, the front bumper includes an integrated splitter, the headlights are angrier and more focused, quad exhaust tips poke out of the back and the whole package sits 15mm lower to the ground than a regular A3.

The sporty theme is continued within the cabin too, so much so that anybody who somehow missed the exterior cues would quickly realise they were in a sports model. 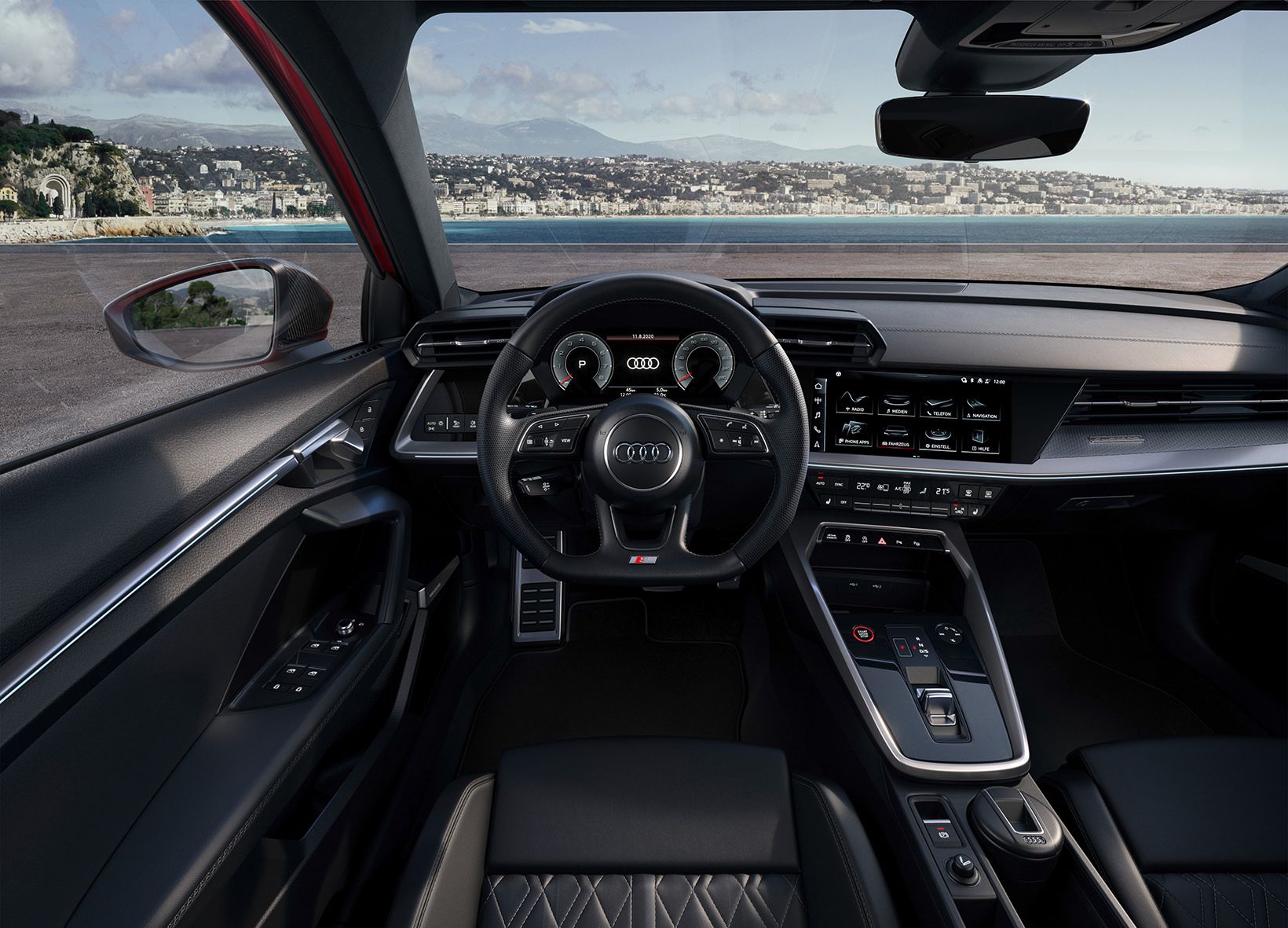 The interior is unashamedly sporty.

Comprising the controls, instrument cluster and centre console, the S3’s entire cockpit is oriented towards the driver who is greeted immediately by the flat-bottom Audi Sport steering wheel.

As usual the instrument cluster is an all-digital affair and as such is fully configurable to one’s tastes while infotainment duties are taken care of by a 10.1-inch touchscreen which pumps its audio through a 15-speaker Bang & Olufsen sound system as standard. 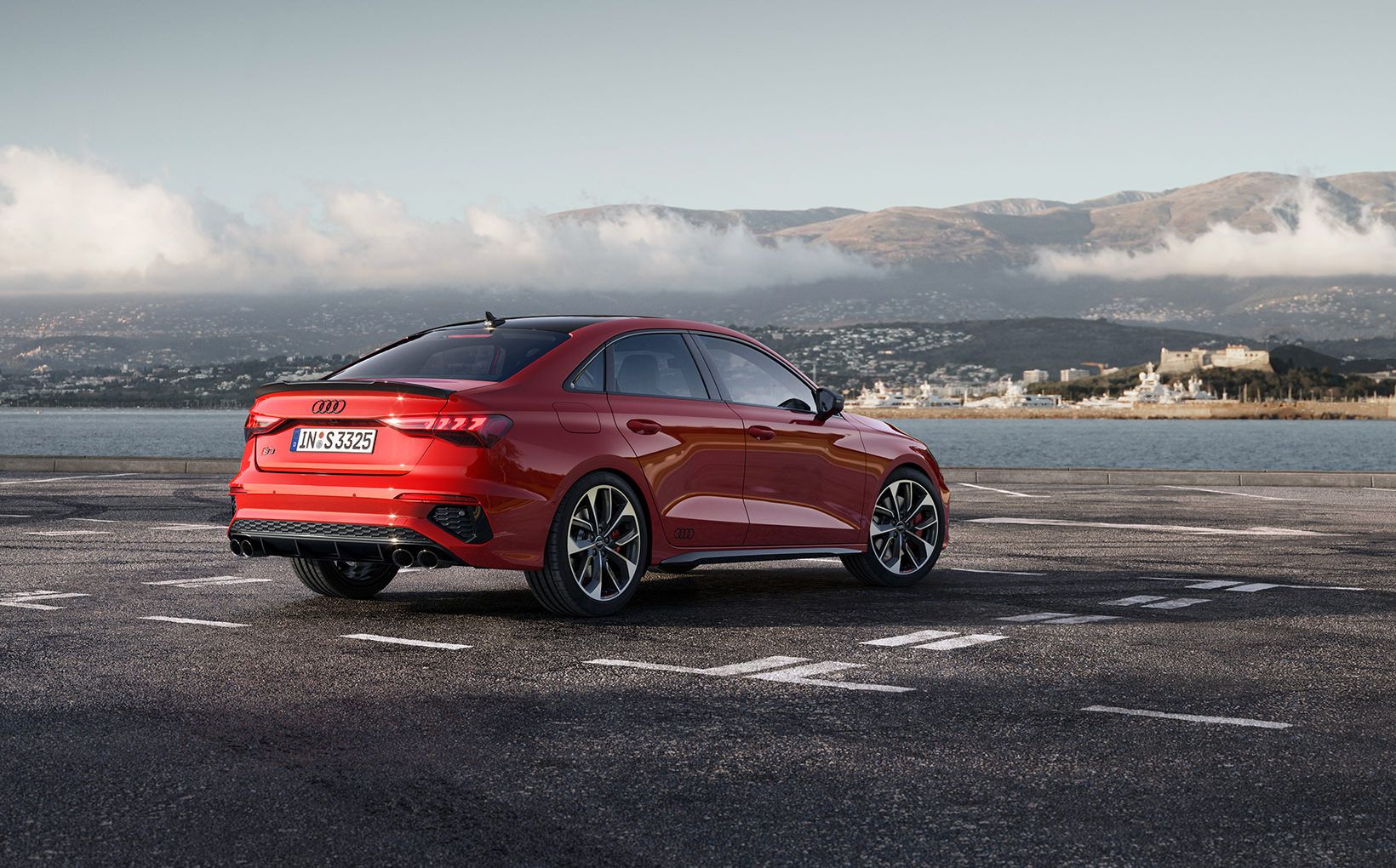 The sedan carries a $2500 premium over the Sportback.

Helping drivers get the most from their cars in terms of both performance and frugality are three drive modes – efficiency, comfort, auto, dynamic and individual – which as most people would know by now, alters the parameters of the engine, transmission, steering, all-wheel-drive system, and stability control systems as well as the standard adaptive dampers.

The whole point or main attraction of a hot hatch is its almost seamless blend of practicality with performance which is why the new S3 hatch offers up 325 litres of boot space which is by no means class leading, but I countered somewhat by the 40:20:40 split-folding rear-seats which expand the load volume to 1145L when stowed.

If any of you are reading this and are underwhelmed by the space on offer, it may be best to upshop to the bigger (and gruntier) S4 Avant or jump across to the Volkswagen dealer early next year and look at the 235kW/420Nm Golf R Wagon. 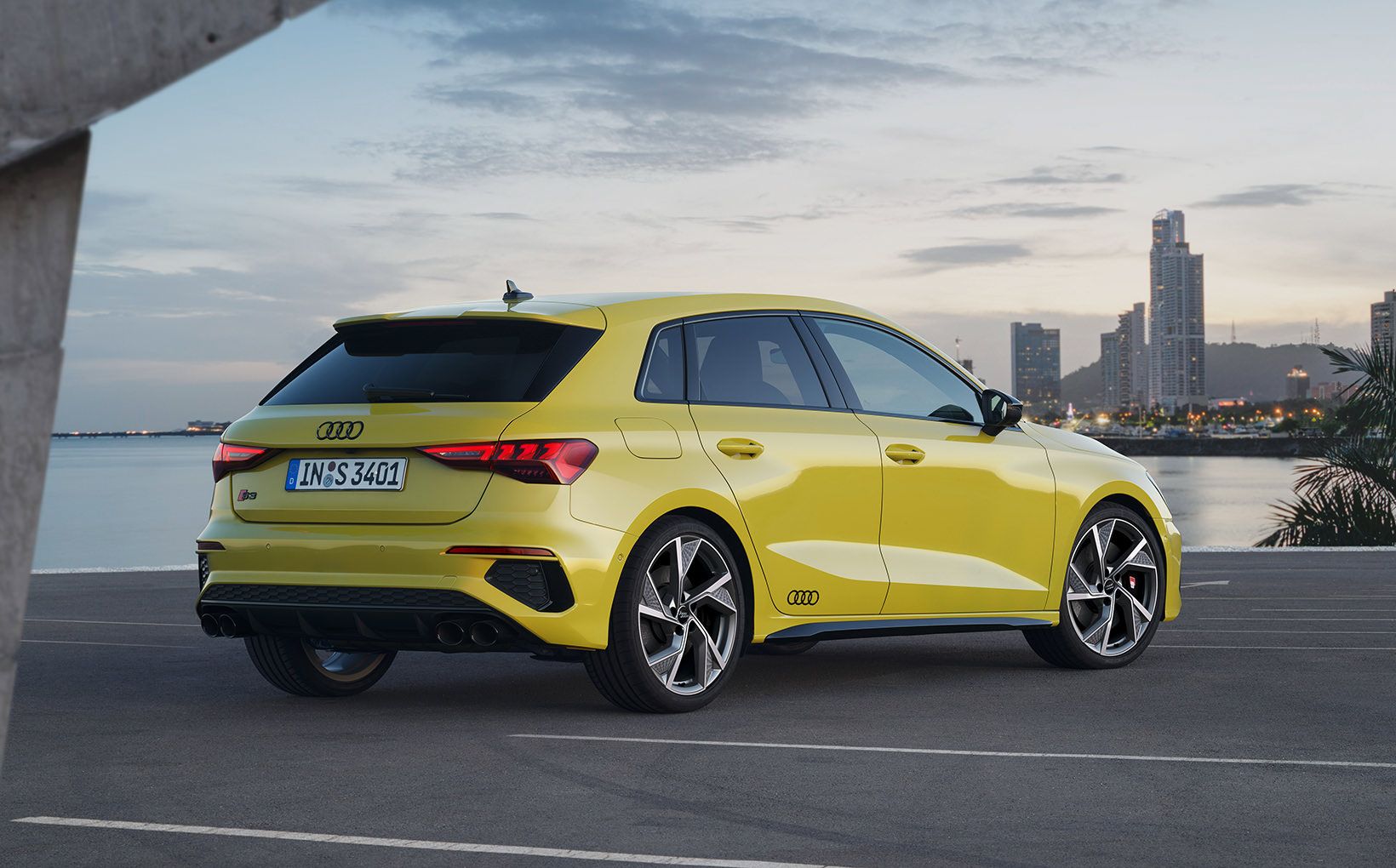 The hatch offers up 325 litres of boot space or 1145L when the rear seats are folded flat.