If ever there was a vehicle that would be high on the wish lists of local off-road enthusiasts, the Ford Bronco Raptor would be near the very top.

The Blue Oval recently unveiled a hardcore Raptor version of the North American-produced, T6-generation Ranger-based off-roader, replete with a stonking 294kW twin-turbo 3.0-litre V6 engine and a host of body- and mechanical upgrades.

The purposefully doorless Bronco Raptor is claimed to be the world’s first Ultra4 Racing-inspired 4x4 that’s as adept at scaling desert dunes at breakneck speeds as extreme rock crawling. It’s essentially Ford’s answer to the 350kW 6.4-litre HEMI V8-engined Wrangler Rubicon 392 that was unveiled late last year, although, like the Jeep, it’s likely to remain exclusive to the US market. 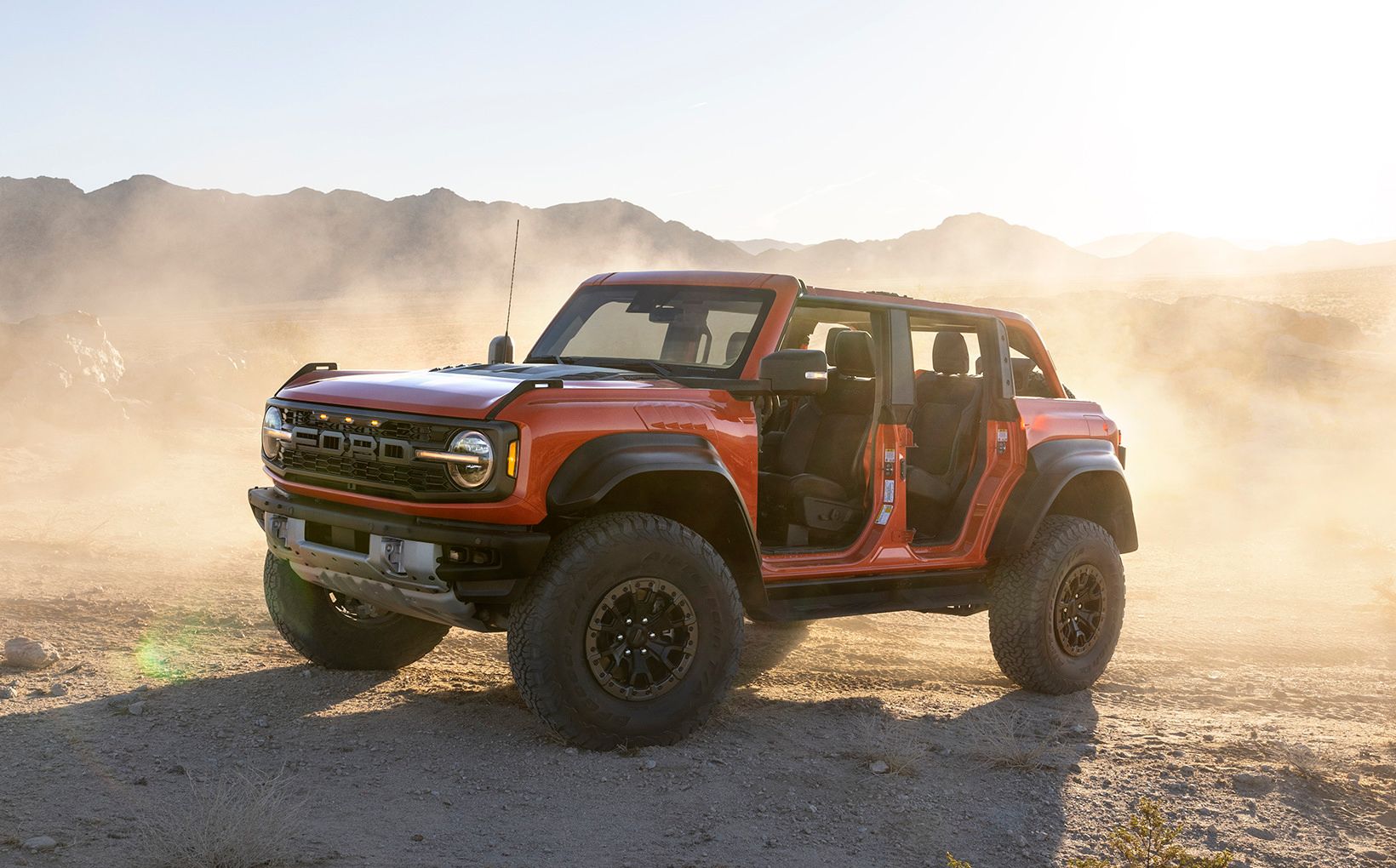 “The Bronco Raptor is our ultimate vehicle for hardcore off-road enthusiasts who demand more,” Ford Performance chief engineer Carl Widmann said. “Like the Ultra4 desert race trucks, the ‘Raptor of SUVs’ is equipped with competition-level off-road technology and hardware.”

This includes a fully boxed, high-strength steel frame with shock towers that facilitate increased wheel travel, as well as heavy-duty bash plates and skid plates. Courtesy of a B-pillar crossbar and C-pillar reinforcement, the Raptor’s body is 50 per cent more rigid than that of a standard Bronco.

The Bronco Raptor is no less than 249mm wider than the vehicle on which it is based. Because it is 2250mm wide, US legislation mandates that the Ford is fitted with a trio of orange lights across its grille! Plus, the Raptor’s competition-level axles make the off-roader’s tracks a 218mm wider. 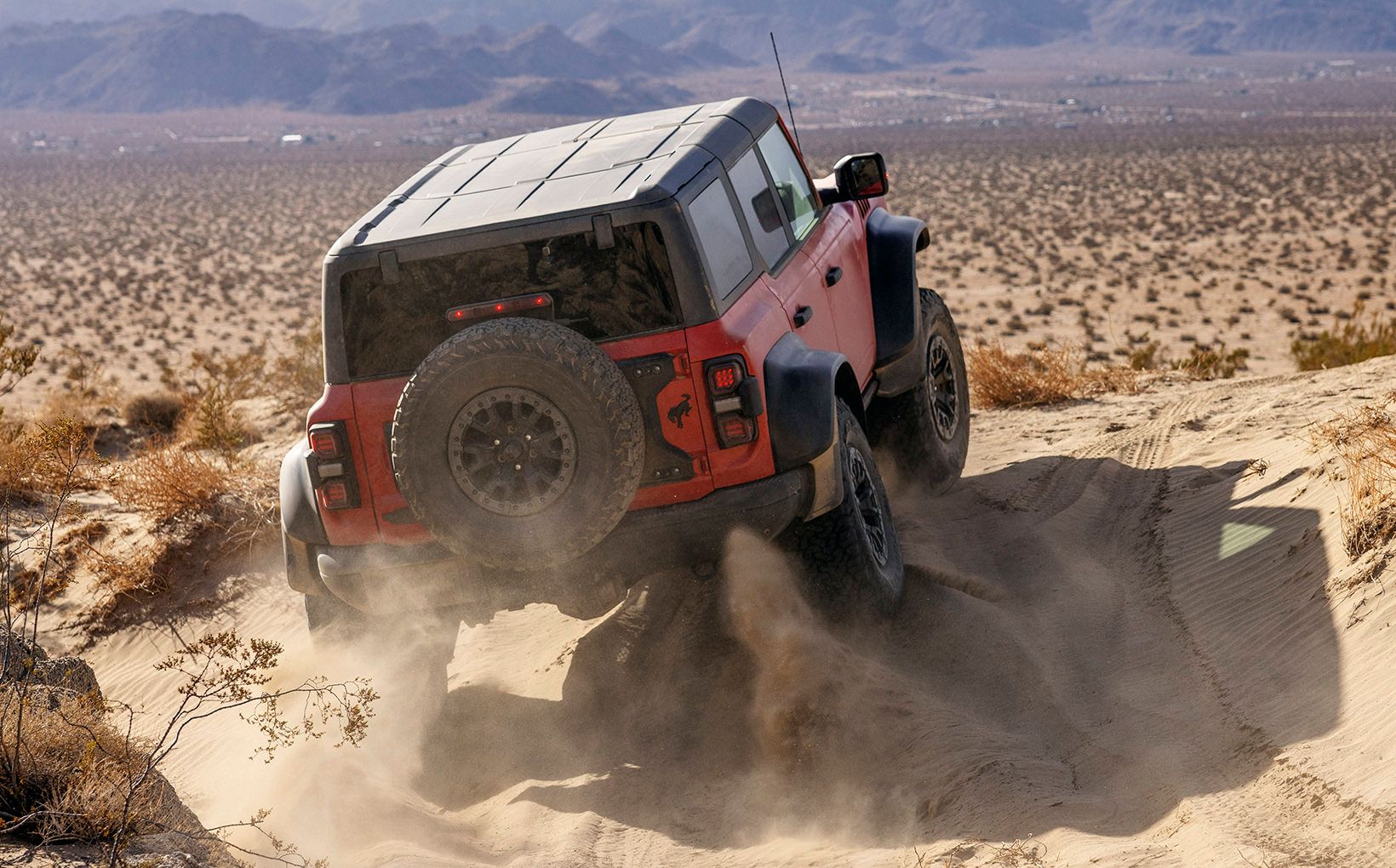 Like other Raptor models, the Bronco Raptor is wider and more rigid than its derivative.
The new off-roader’s heavy-duty steel front bumper features tow hooks, removable end caps for improved off-road clearance, and removable LED fog lights – plus a vented bonnet, which is made from sheet-moulding compound (SMC) and features Raptor badging.

Around the side, the Bronco Raptor has bespoke front and rear fenders, SMC wheel arches with integrated vents, wheel-arch extensions, and reinforced rock rails with removable side steps. To realise the newcomer’s off-roading aspirations, 37-inch BF Goodrich KO2 all-terrain tyres are fitted.

The powerplant, which makes the Raptor the most powerful road-legal Bronco ever, features uprated intercooler and air-induction systems to compensate for higher ambient desert temperatures. It’s mated with a beefed-up version of Ford’s 10-speed automatic transmission and an upgraded transfer case that features a 3.06 4x4 low ratio for up to 67.7:1 crawl ratio. 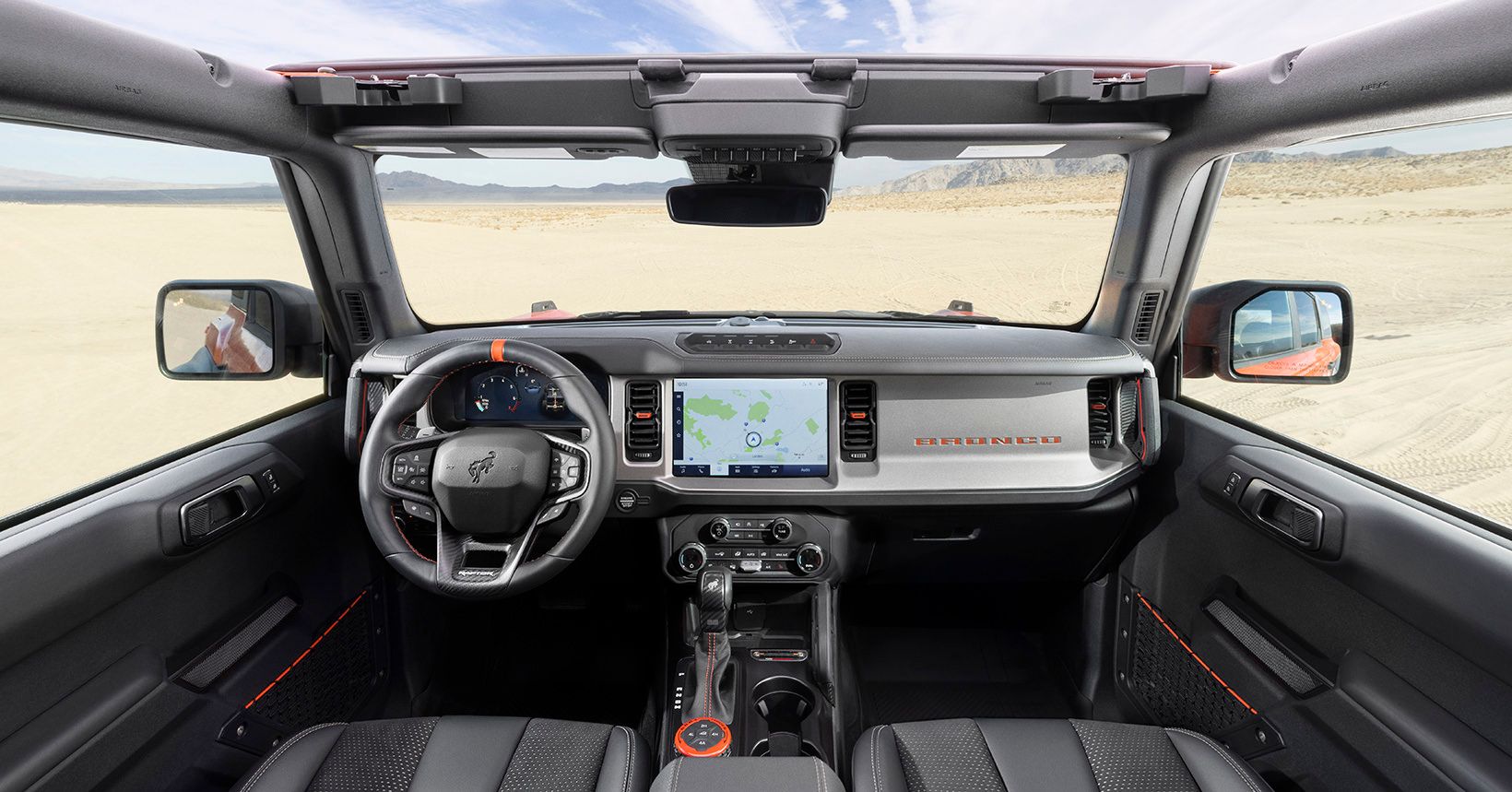 The 294kW/563Nm Bronco Raptor is the most powerful production Bronco ever!

The High-Performance Off-Road Stability Suspension 4.0 was co-developed with FOX and Ford Performance. The adaptive system features internal bypass semi-active dampers that deliver up to 60 per cent more wheel travel than before, while the ground clearance is a claimed 333mm.

To add to the Raptor’s sense of theatre, a dual exhaust system with active valve technology produces no fewer than four selectable exhaust notes including Normal, Sport, Quiet and Baja.

The Bronco Raptor further utilises Ford’s G.O.A.T. (Goes Over Any Type of Terrain) terrain management system, which offers seven selectable modes, including a uniquely tuned Baja mode and a Tow/Haul mode that allows for a maximum tow rating of 2041kg, the Blue Oval says. 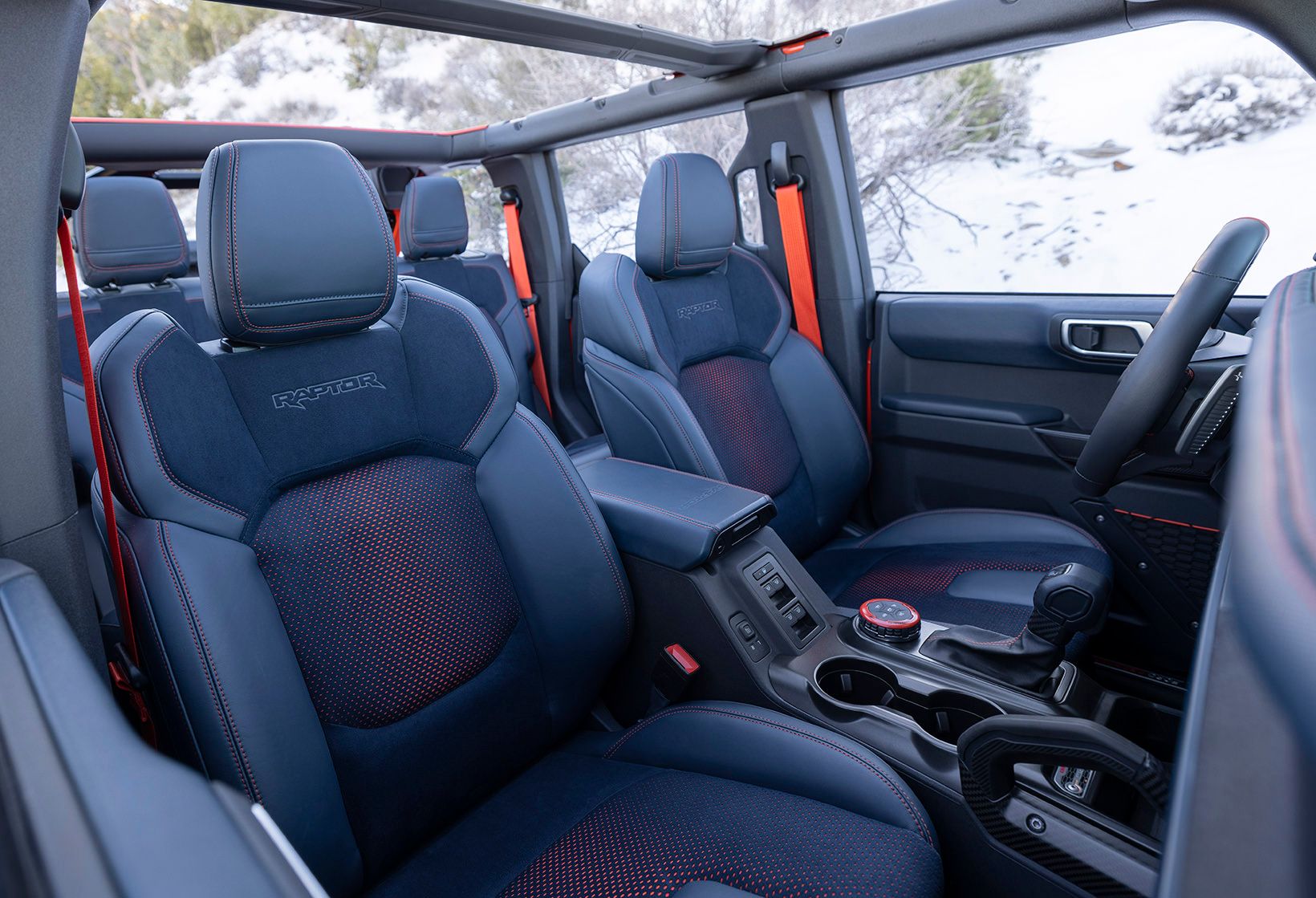 The off-roader’s interior is no less purpose-built than its hardcore exterior and is accented with Code Orange on the G.O.A.T modes dial, vents, door netting, steering wheel stitching and Bronco logo. The grab handles, steering wheel bezel and transmission lever have carbon-fibre accents.

Even though the Bronco Raptor is based on one of Australia’s top-selling models – the Ranger – it’s not earmarked for right-hand-drive production, which rules it out for our market. However, several of the off-roader’s mechanical elements, including perhaps its twin-turbo petrol V6, are likely to be incorporated in the next-gen Ranger Raptor, which should arrive Down Under in 2023. 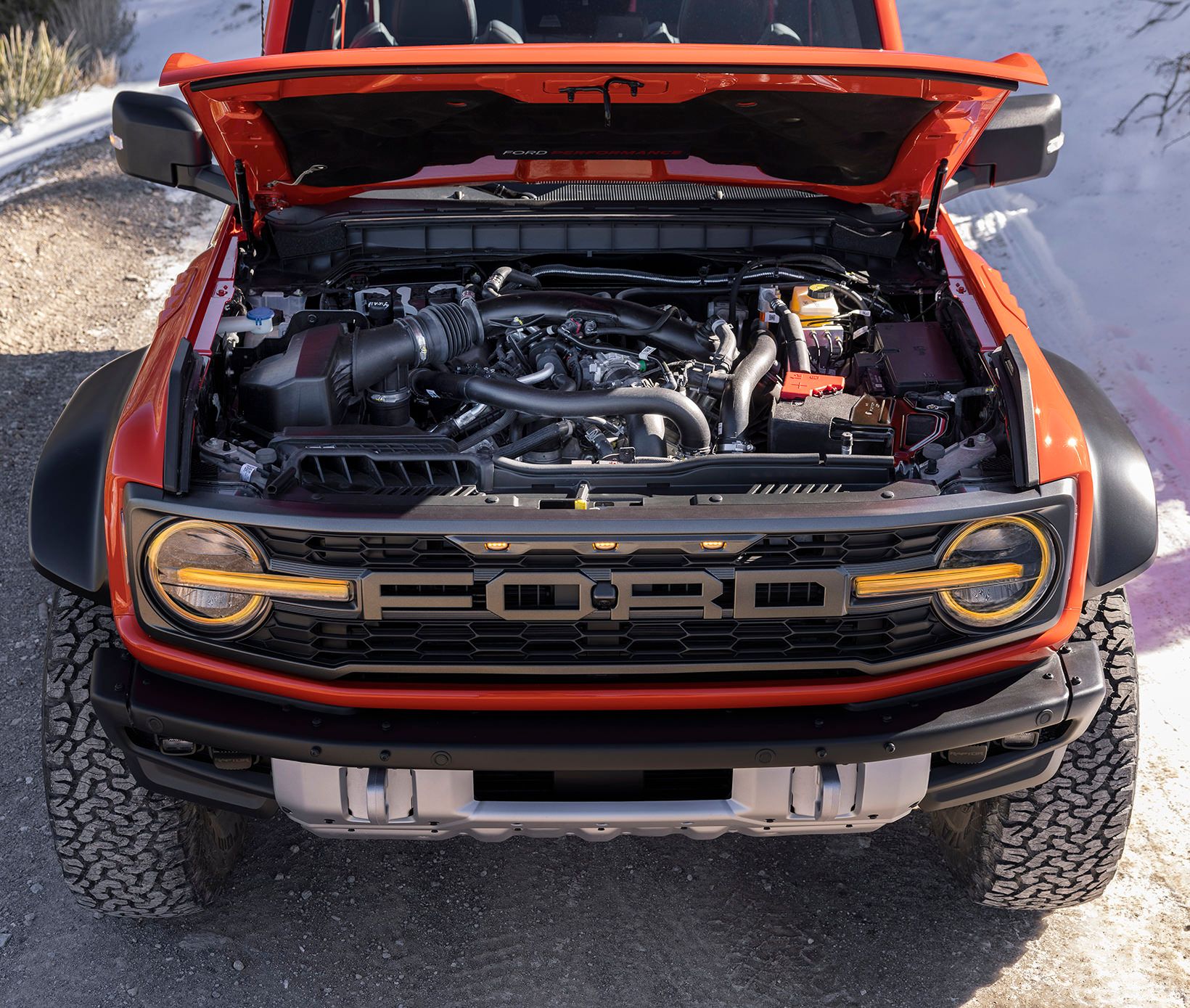