Just when it seemed the sedan was destined for extinction – apart from, perhaps, limousines – the electrification of the motor industry seems to have thrown a lifeline to the venerable “four-door”.

Make no mistake, many manufacturers favour crossover bodies for their upcoming battery-electric vehicles, but electric sedans are doing quite alright, thank you.

So far this year, the Tesla Model 3 is the best-selling electric car in Australia and the Porsche Taycan, having already overtaken the iconic 911 to become the third most-popular model in Zuffenhausen-based brand’s local line-up, has surpassed the BMW 5 series as the nation’s favourite large passenger car above $70,000. 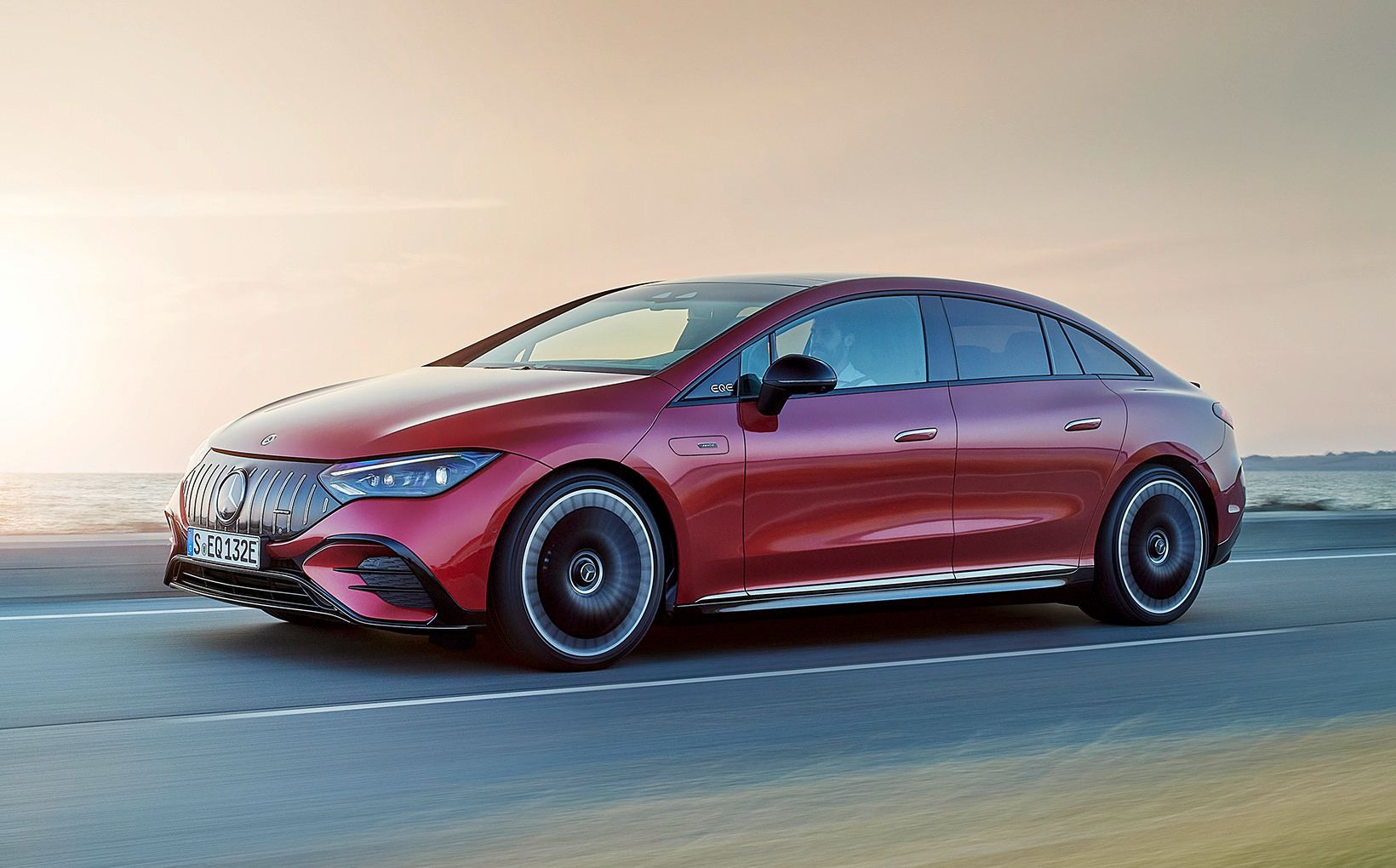 The all-electric Mercedes-AMG EQE could revive the four-door sedan market.

And don’t think that Mercedes-Benz Cars Australia will let its premium rivals steal the limelight for much longer. Having already introduced the battery-electric EQC medium SUV and EQA light SUV Down Under, the Three-Pointed Star has an, um, battery of all-electric models lined up for local introduction this year, including the EQB compact 7-seater and a brace of commercial vehicles.

The Mercedes-Benz EQS, which is the same size as the S-Class grand saloon, will be here soon and the Mercedes-AMG EQS 53 4Matic+ variant is poised to sit at the pinnacle of the brand’s local line-up of battery-electric passenger vehicles... However, the EQS’s smaller EQE sibling is heading here too, and the range is likely to be headlined by a 498kW/1001Nm Mercedes-AMG variant.

The Three-pointed Star recently unveiled the Mercedes-AMG EQE 43 4Matic and EQE 53 4Matic+, the latter of which will be available with an AMG Dynamic package and, although the Australian EQE line-up is yet to be finalised, it’s the 53 4Matic+ – not the 43 4Matic – that is coming here. 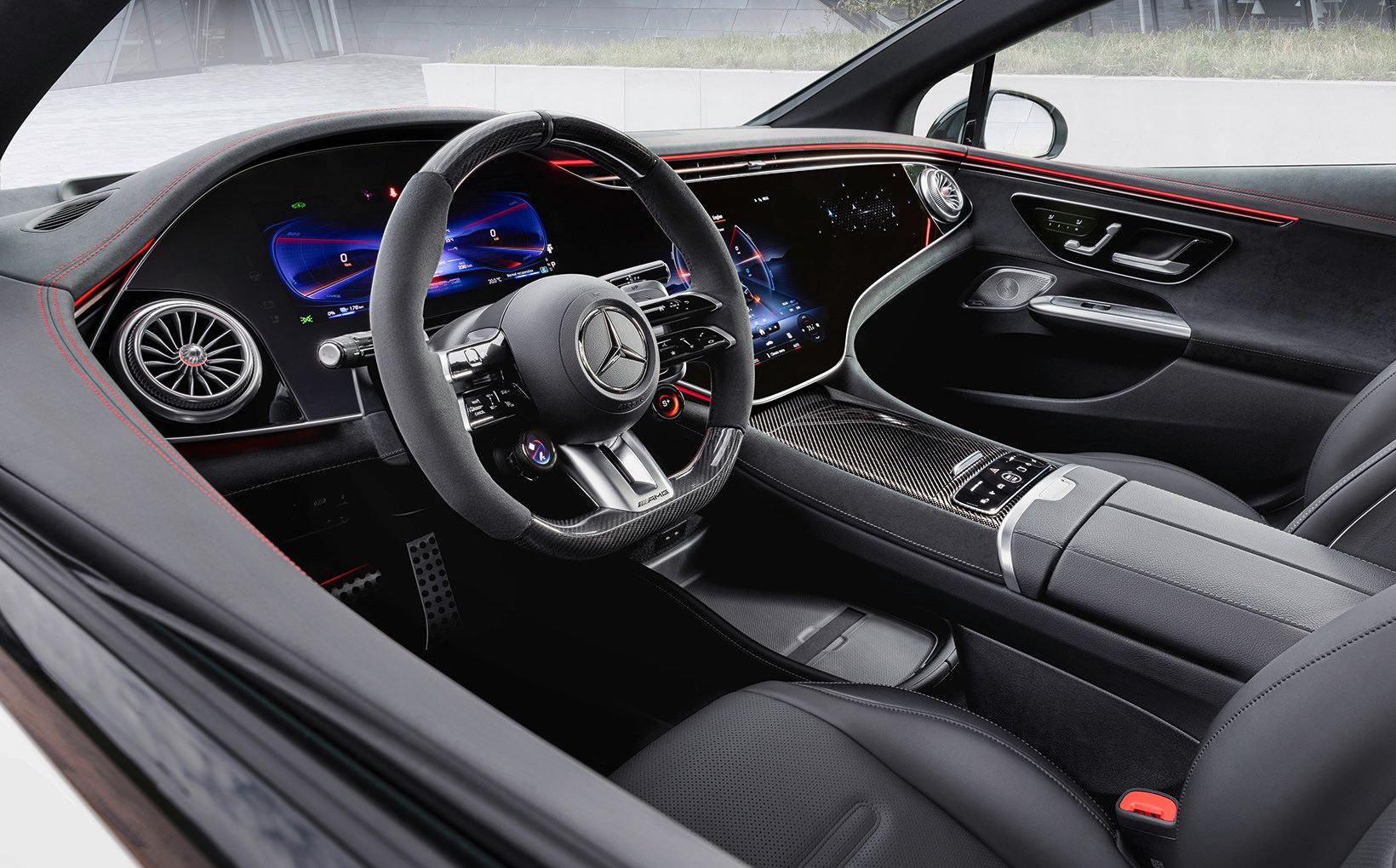 As opposed to some of its EQ model siblings, the EQE is not based on a conventional model, but rides on ‘Benz’s EVA platform, which also underpins the EQS. It’s slightly shorter, but notably taller and wider than its E-Class stablemate, which means it is also much more spacious inside.

As opposed to their non-AMG siblings, both the EQE 43 4Matic and the 53 4Matic+ have dual electric motors (one positioned at each axle) paired to a 90.6kWh battery. However, whereas the former produces 350kW and 858Nm, the latter delivers 460kW and 950Nm – in standard spec. 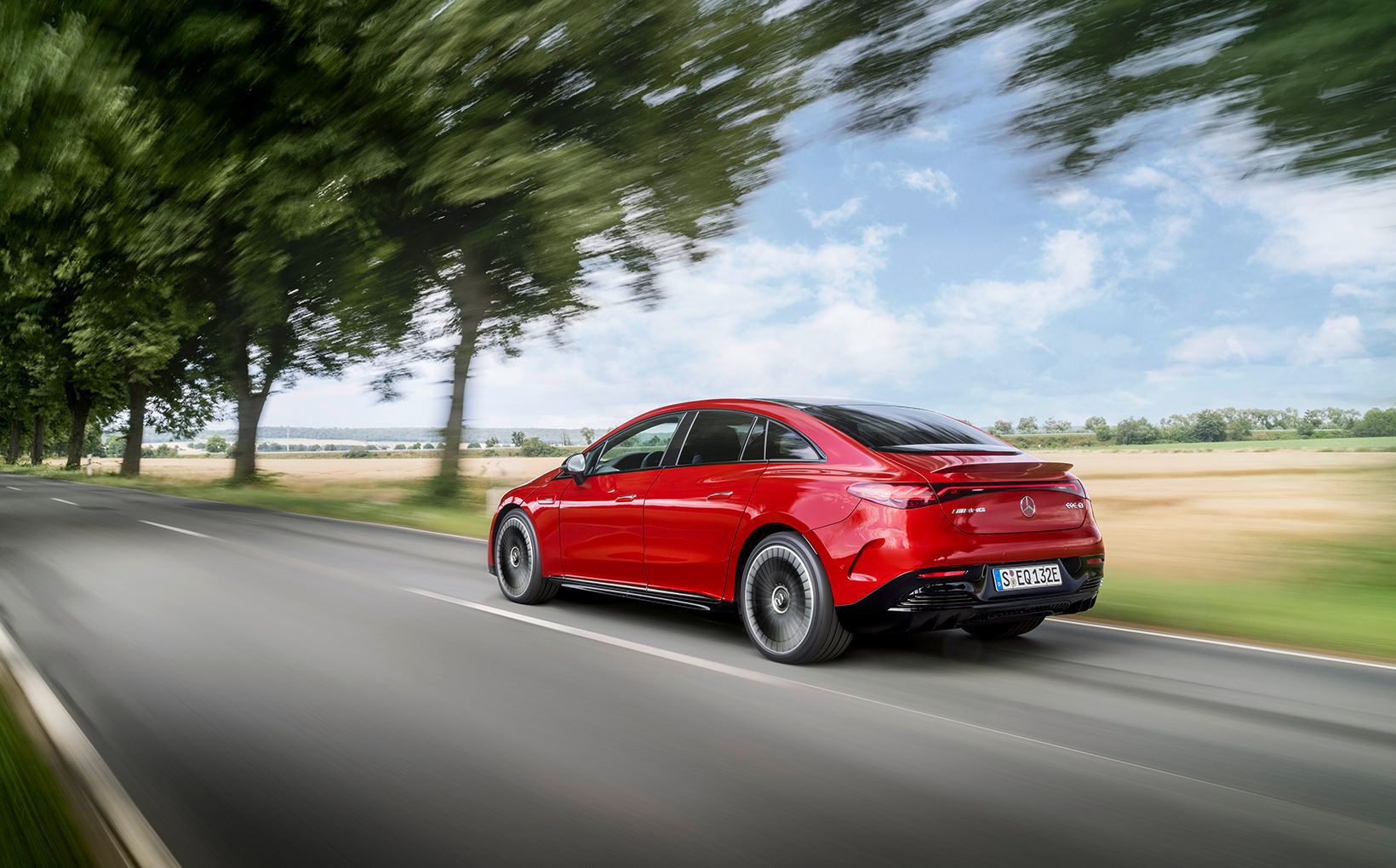 With the AMG Dynamic Plus package specified, the EQE 53 4Matic+ is claimed to accelerate to three figures in 3.2 seconds and top out at 240km/h. It has an 11kW onboard charger and fast charging (using a 170kW) outlet will result in 180km of range being added in just 15 minutes.

From a cosmetic point of view, the newcomer can be distinguished by its sporty bumpers, stripey black closed “grille”, 20-inch multi-spoke alloys, as well as sporty bumpers and side skirts.

The EQE’s cabin is dominated by the expansive MBUX Hyperscreen that spans the width of the dashboard and incorporates three screens (two of which is of the touch-input variety) under one uninterrupted glass surface. 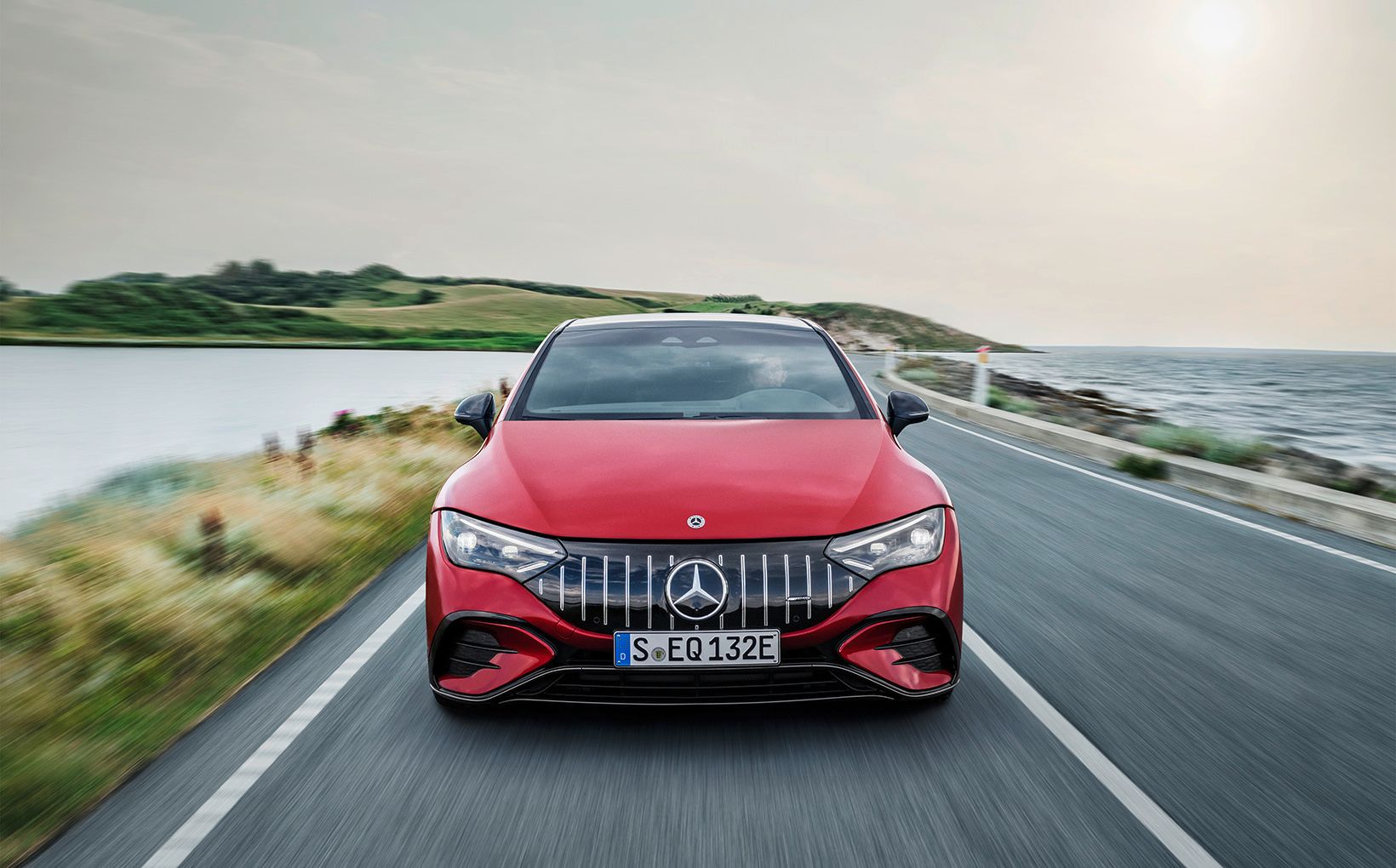 The EQE’s cabin is dominated by Ben’z appropriately-named MBUX Hyperscreen.

Mercedes-AMG models are renowned for their evocative exhaust notes, but the EQE 53 4Matic+ is all-electric, so does that mean that it will lose one of the brand’s unique selling propositions? 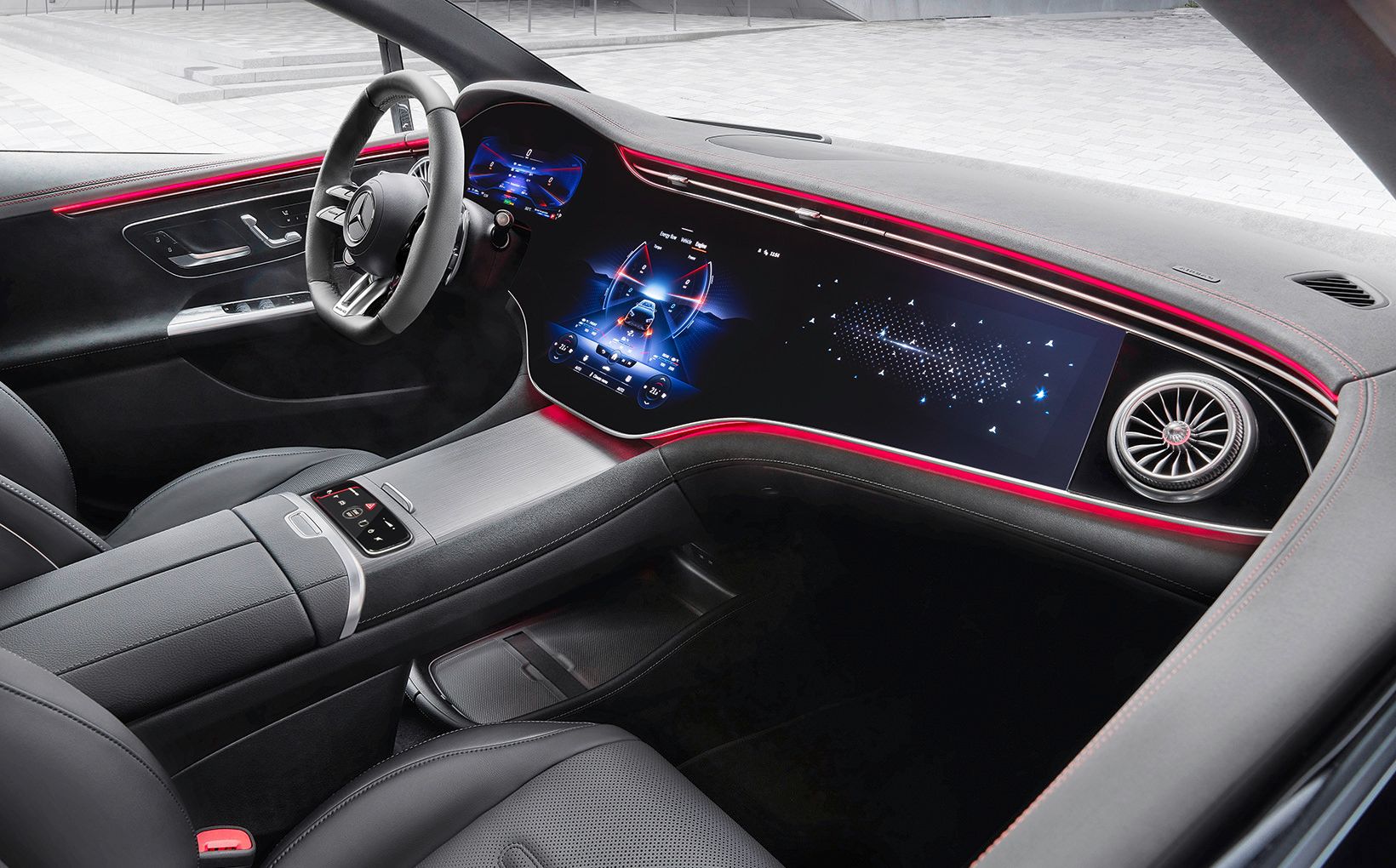 Pricing will be announced closer to the model’s local launch later this year.

Not entirely – to enhance the driver’s sensation of on-road performance, the EQE’s AMG Sound Experience system utilises special speakers, a bass actuator and sound generator to match drive modes with synthesised sound profiles such as Authentic, Balanced, Sport and Powerful.

The EQE is set to arrive Down Under in the latter half of 2022, possibly closer to the end of the year.