THIS past November saw the unveiling of not one but two of the most controversial new models previewed over the last decade. The first was the Tesla Cybertruck, and the other wears a Mustang badge.

Most people associate the latter with big, brutish Ford-built coupes and convertibles that are as American as Steve McQueen and his jaded cop character Bullitt in the 1968 movie of the same name, and incredibly unlikely car chases through the city of San Francisco. Stirring stuff.

It’s been that way since not long after the original Mustang surfaced in 1964. 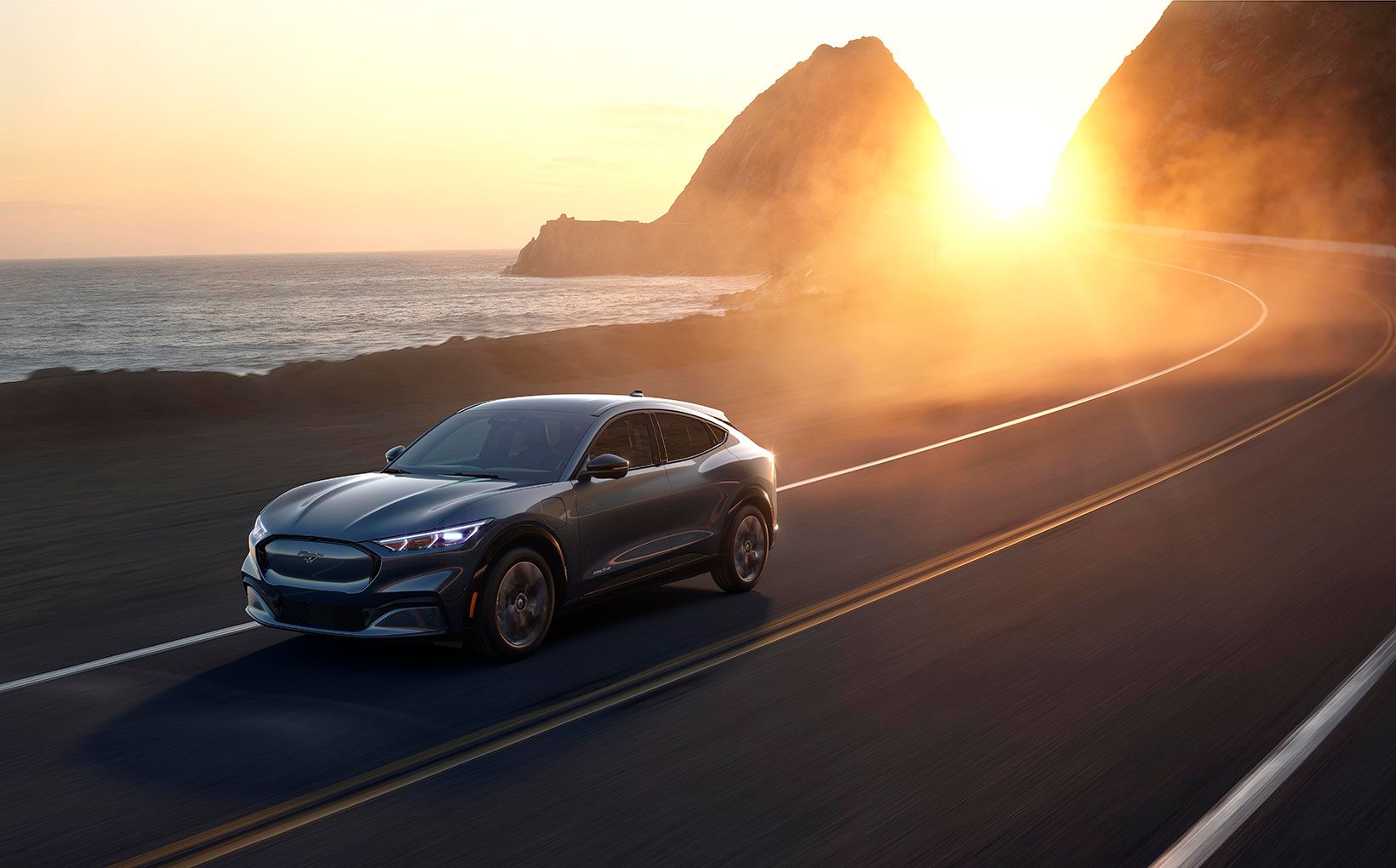 For the 2020s, however, Ford reckons the world is ready for another type of Mustang… a greener and cleaner type of Mustang, with four doors, five seats, a sizeable tailgate and the unmistakable altitude and silhouette of an SUV – albeit one with a hatchy/coupe attitude.

Welcome, then, to the all-new Mustang Mach-E, the Blue Oval’s first dedicated electric vehicle (EV), promising to combine supercar levels of performance as per the heritage of the famous nameplate, with family-friendly crossover practicality.

Due to be rolled out internationally from late 2020, is it the evolution or the desecration of a hallowed badge? And will we ever see the Mustang Mach-E in Australia? 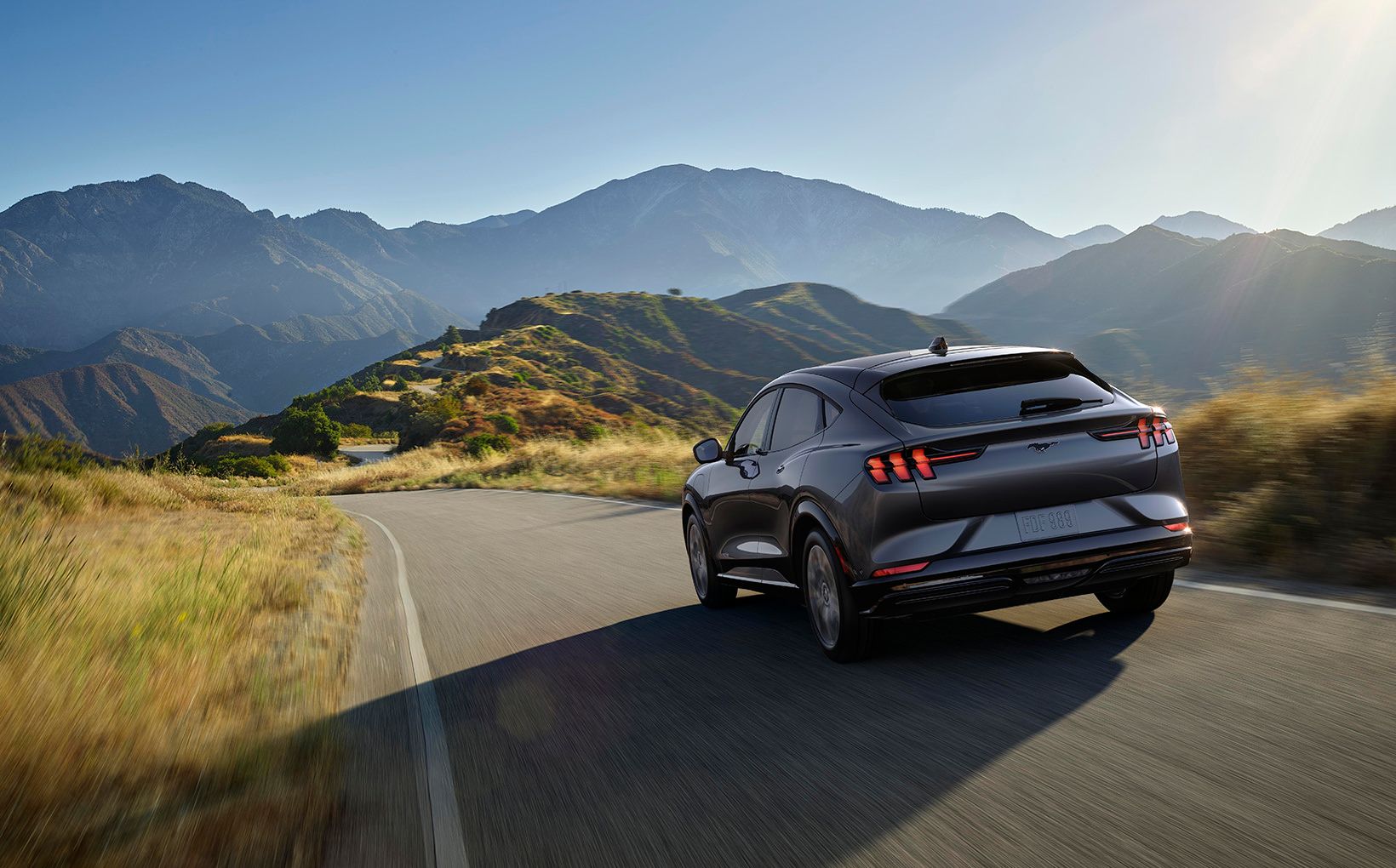 We cannot definitively answer the second question, but we can certainly break down what Ford’s massive multi-billion-dollar EV gamble is and why it might be the most important vehicle in the company’s portfolio for a very, very long time.

Perhaps that’s why the Dearborn, Michigan-based head honchos decided to lean so heavily on such a well-known name. Ford even released a 20-minute video featuring execs debating on the pros and cons of doing so.

Clearly, a lot is riding on this vehicle. Except, bizarrely, no Ford badge, just the galloping pony logo.

AWD versions will be able to apply torque independently to the front and rear axle, and has been calibrated by Ford engineers to provide optional traction in less-than-ideal conditions.

Let’s get one thing straight. Expecting the Mexican-made Mach-E to somehow look like ‘the Mustang of SUVs’ might be a stretch, because while there are some clear visual cues linking the crossover to today’s coupe/convertible – namely in the grille, kicked-up side window line and three-tiered taillight motifs – the shape isn’t too dissimilar to, say, a contemporary Mazda CX-something or BMW X4.

This immediately brings to mind the Jaguar i-Pace EV SUV, and that should be some clue as to what Ford’s aspirations are. Prices in the UK, for instance, will start north of $80,000 and probably breakthrough the $100K barrier (in Aussie dollars). This type of tech sure doesn’t come cheap!

So, precisely what is this tech, then? The platform is known as Ford’s Global Electrified 2 (GE2), which is a revamped version of the all-new C2 platform first seen in the latest Focus and soon to debut beneath the third-generation Escape – which is roughly equal in size to the Mach-E. 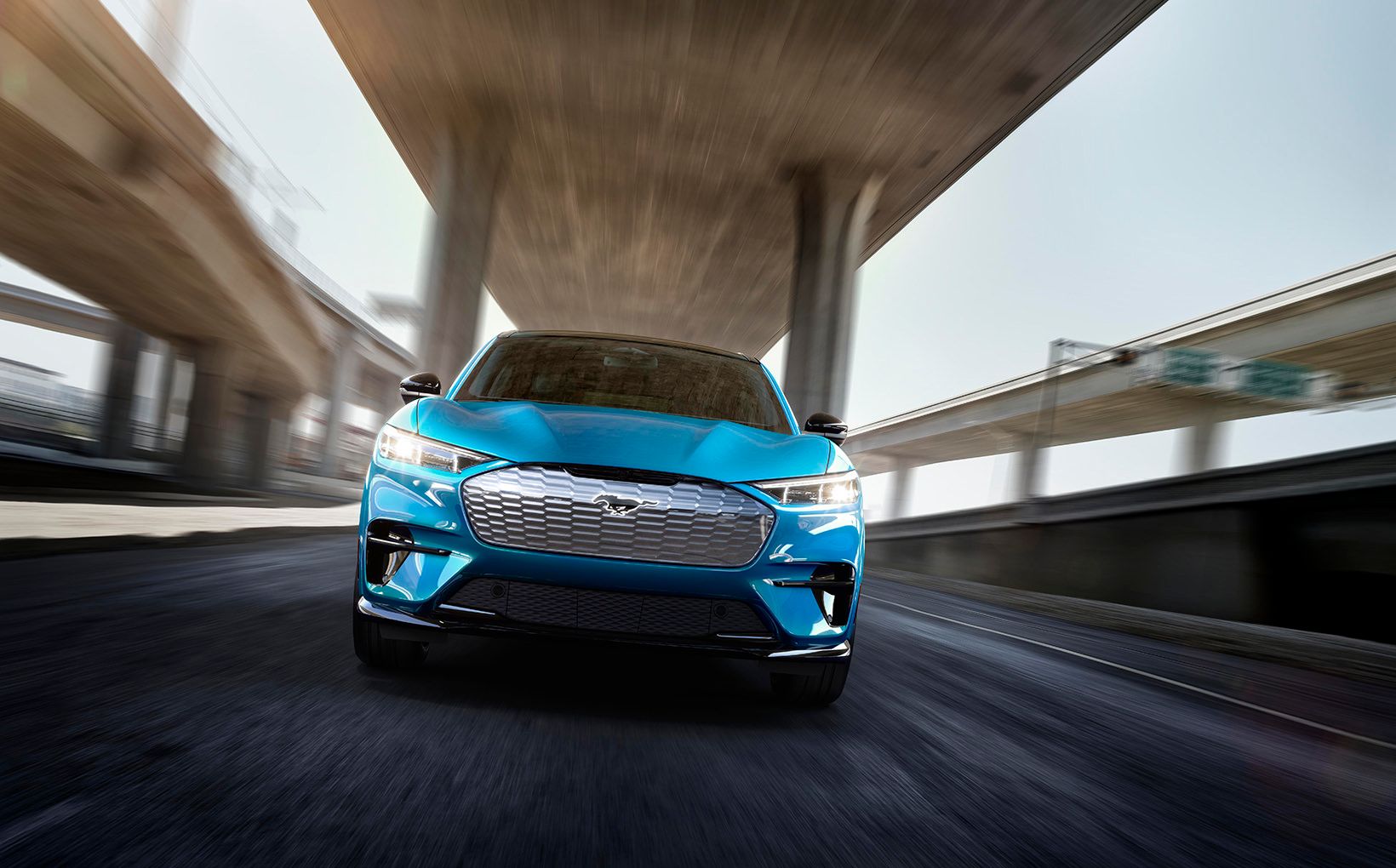 A magnetic electric motor is located on the rear axle, while the dual motor versions are all-wheel drive with a second on the front axle.

The standard Mach-E RWD will employ a 75.7kWh lithium-ion battery (located low down in the rear half of the vehicle), while extended-range versions up that capacity to an impressive 98.8kWh, meaning maximum range should be in the vicinity of 480km (on RWD versions).

Using a DC charging station, the 75.7kWh RWD model could achieve 80 per cent charge in under 40 minutes, while Ford is offering a wall box in some markets for home or office use, with 51km of driving range per hour of charge on a 240V outlet, needing under eight hours all up. Just plug it in overnight like a smartphone, then. 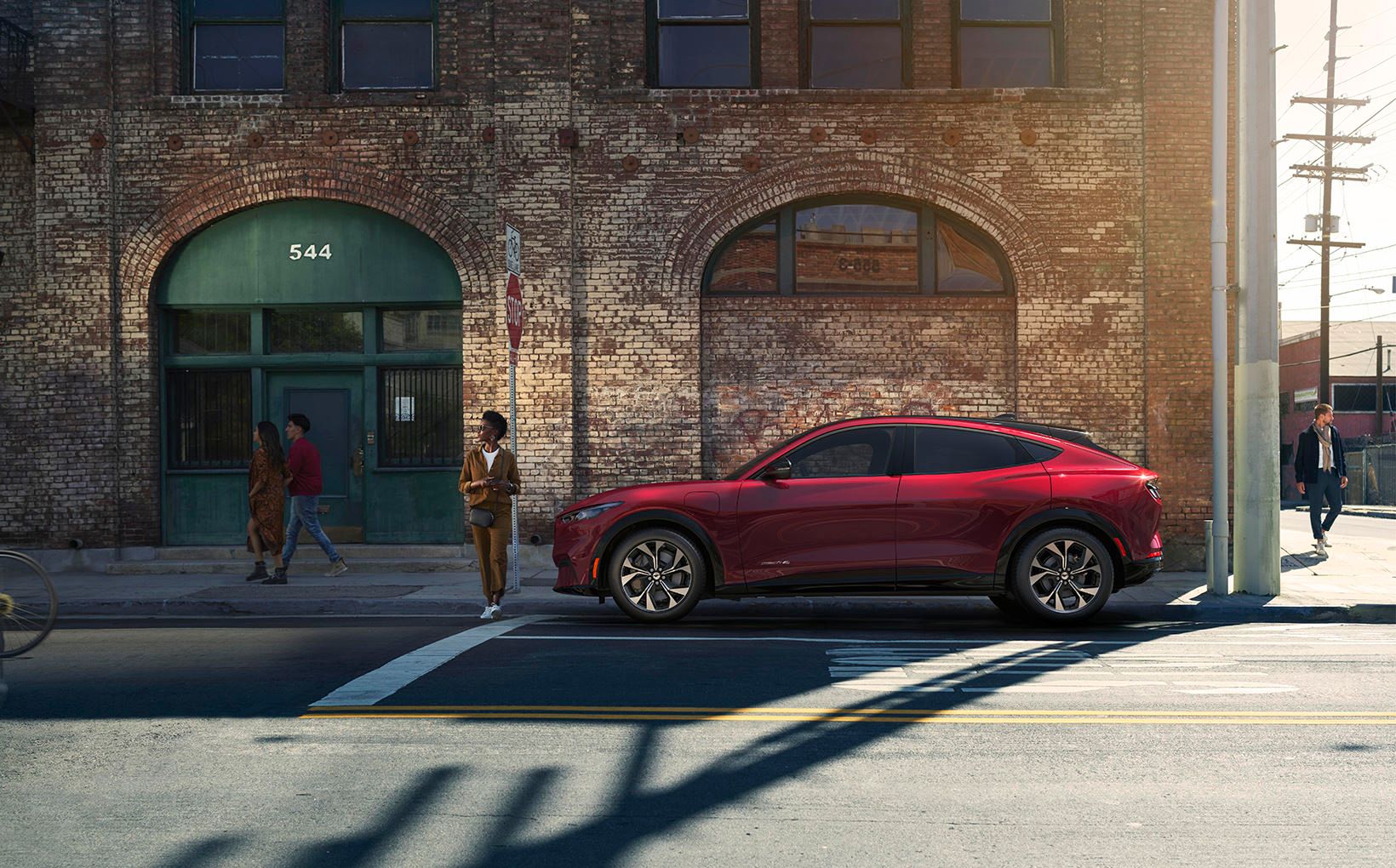 Look, no door handles! Instead of pop-out handles like a Jaguar i-Pace, the Mach-E has a nub at the base of the B-pillar with a button that can be pushed.

Power and torque outputs will range from between 190kW to 248kW and 415Nm to 565Nm respectively, depending on the battery pack and driveline.

For buyers seeking a bit more of that famous Mustang bite, there will also be a pair of high-performance models to satiate their need for a speedy steed – GT and GT Performance Edition, with the latter boosting outputs to around 342kW/830Nm.

These should be enough for the ultimate Mach-E GT PE to hit 100km/h in about 3.7s. To help drivers out, there are three driving modes available – Whisper, Engage and Unbridled. We reckon the latter might be akin to Tesla’s Ludicrous Mode.

Keeping all this horsepower in check on the flagship Mustang crossover will be optional Brembo brake callipers, while Ford’s adaptive damper system ought to cushion the ride on models with massive alloy wheels fitted.

On the practicality front, boot volume varies from 402 litres to 1420L if the rear seats are folded, while there’s also an additional 136L under the front bonnet – or frunk in Tesla-vernacular. Ford says it is waterproof and drainable so it can be used as an ice box.

Inside the surprisingly pared-back cabin, Ford’s engineers have attempted to meld the modern with the familiar, so while there is an abundance of screens, the basic packaging and switchgear elements are as per normal vehicles within the company’s range. 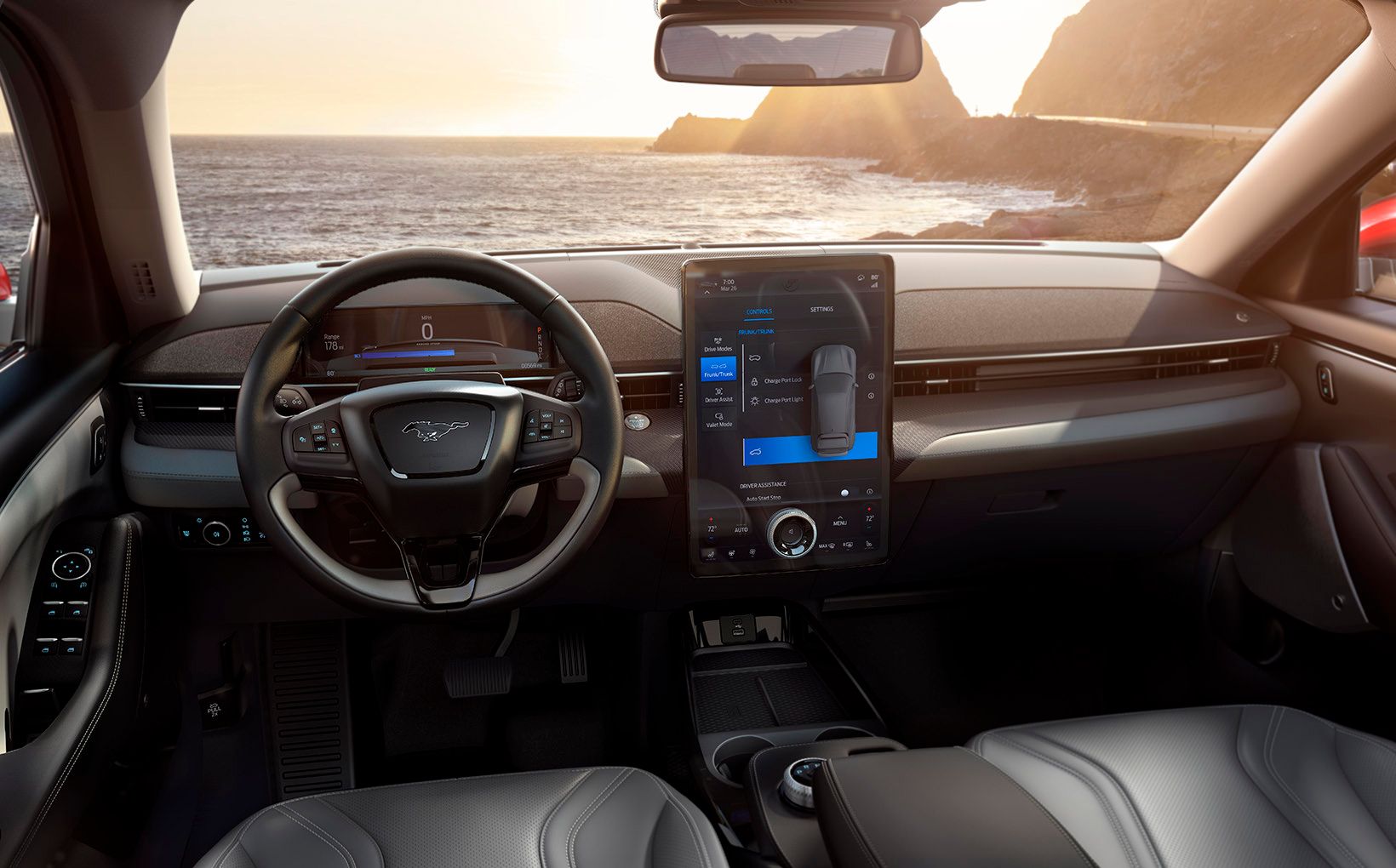 Lots of influences from other brands evident in the dash… BMW i3 in the instrumentation, Tesla Model S with the huge portrait tablet screen – but it all seems to gel quite nicely.

That said, the Mach-E debuts Sync4 – which is projected onto a large portrait-style 15.5-inch tablet that is again reminiscent of the Tesla Model S and X models. Among a myriad of other items, it offers smartphone-style touch, swipe and pinch controls.

There’s also a new ‘Phone as a Key’ system, allowing for keyless entry via smartphone proximity, while more money will secure a top-end sound system and the now-mandatory fixed panoramic glass roof option.

More Mustang Mach-E information will be available closer to the EV’s international launch sometime later in 2020. With Australia’s lagging low-emissions policies and EV infrastructure, it is unlikely Ford will rush this intriguing new vehicle to our market any time soon, but a lot can happen in a year and perhaps enough interest from prospective buyers might help change minds. 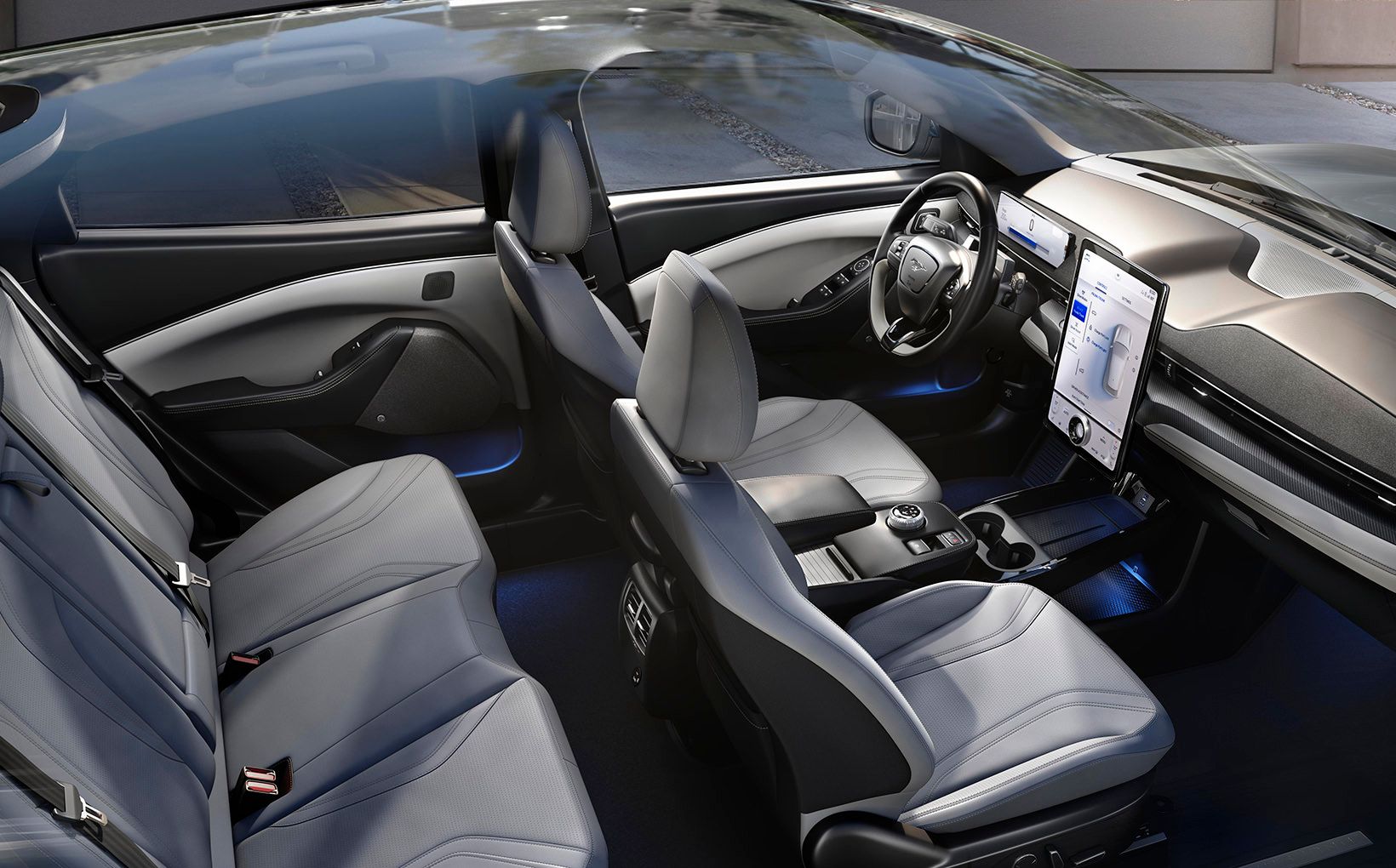 Ford claims there is space for five adults, making the Mach-E a proper family-focused crossover. Cargo capacity varies from 402 litres with the rear seatbacks erect to 1420 litres.

Whatever the case, is Ford brilliant or crazy hitching its EV horse on the famous pony car?