If people were asked to name Ford’s most iconic model, some may say the Model T that started it all for the Blue Oval; others may look at the F Series truck that regularly ranks as one of the best-selling vehicles across the globe.

Muscle car enthusiasts will likely have a different answer – the legendary Mustang pony car that has enthralled audiences since the first-generation version was constructed in Michigan in 1964.

Also synonymous with the Mustang is a burly V8 petrol engine, which has been offered on the Mustang in every generation since its launch, and forms a major part of the muscle car’s all-American identity. 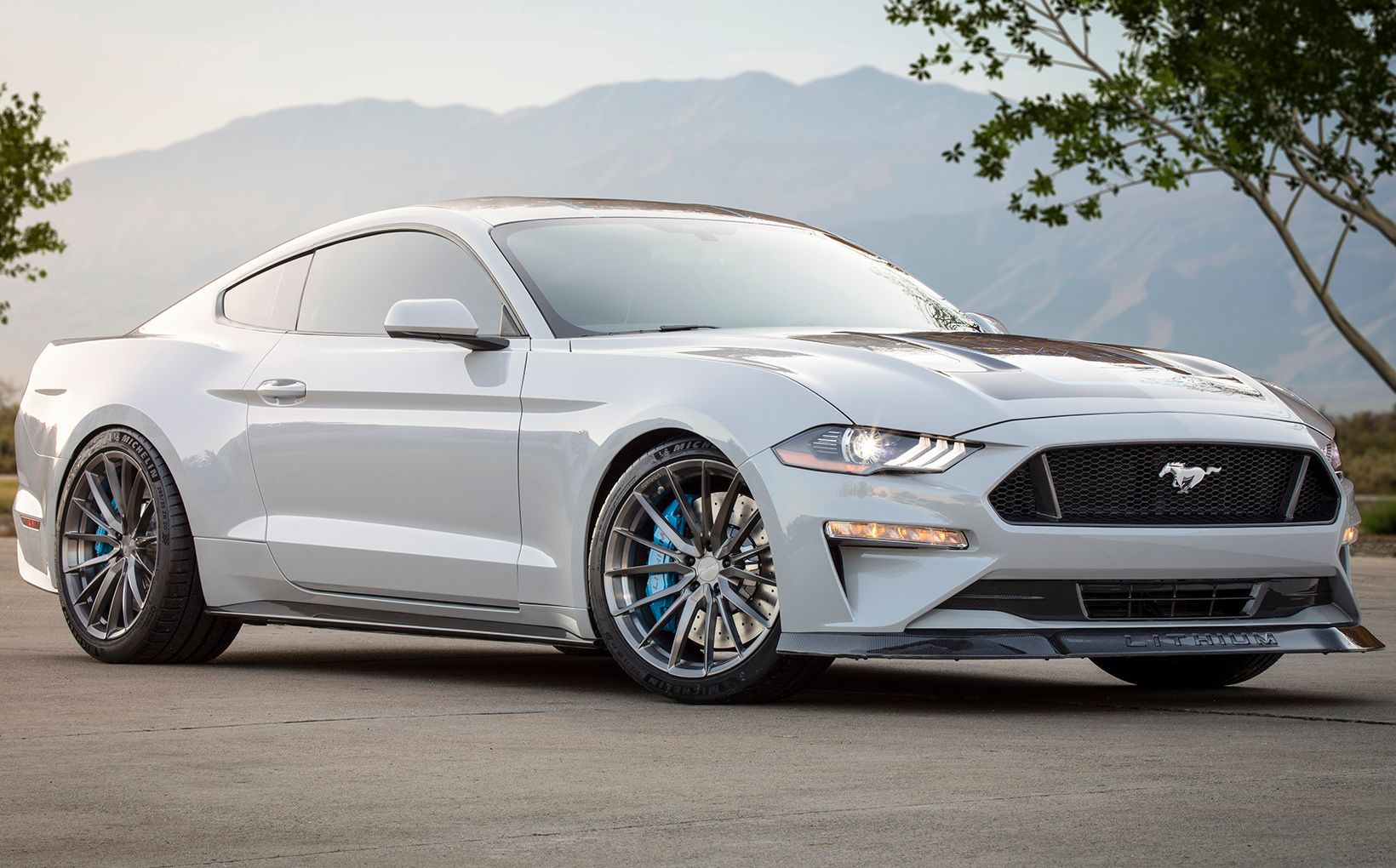 It may look fairly normal on the outside, but under the bonnet of the Ford Mustang Lithium concept hides some big surprises.

An all-electric, zero-emissions powertrain is about as far removed as you can get from a V8 engine, however the boffins at Ford have developed a green Pony Car called the Mustang Lithium concept that made its public debut at the SEMA show in the US in November.

While it may seem sacrilege to some, doubters of the all-electric Mustang will have second thoughts when they hear about its outputs, with the zero-emission, single-motor coupe able to punch out a fearsome 671kW of power and a massive 1356Nm of torque, enough to make any modern supercar blush.

To put it into perspective, the Lithium concept blows away the current top-spec 5.0-litre aspirated V8 in the Mustang GT, with the GT’s 339kW/556Nm falling a laughable 278kW/800Nm short of the EVs outputs. 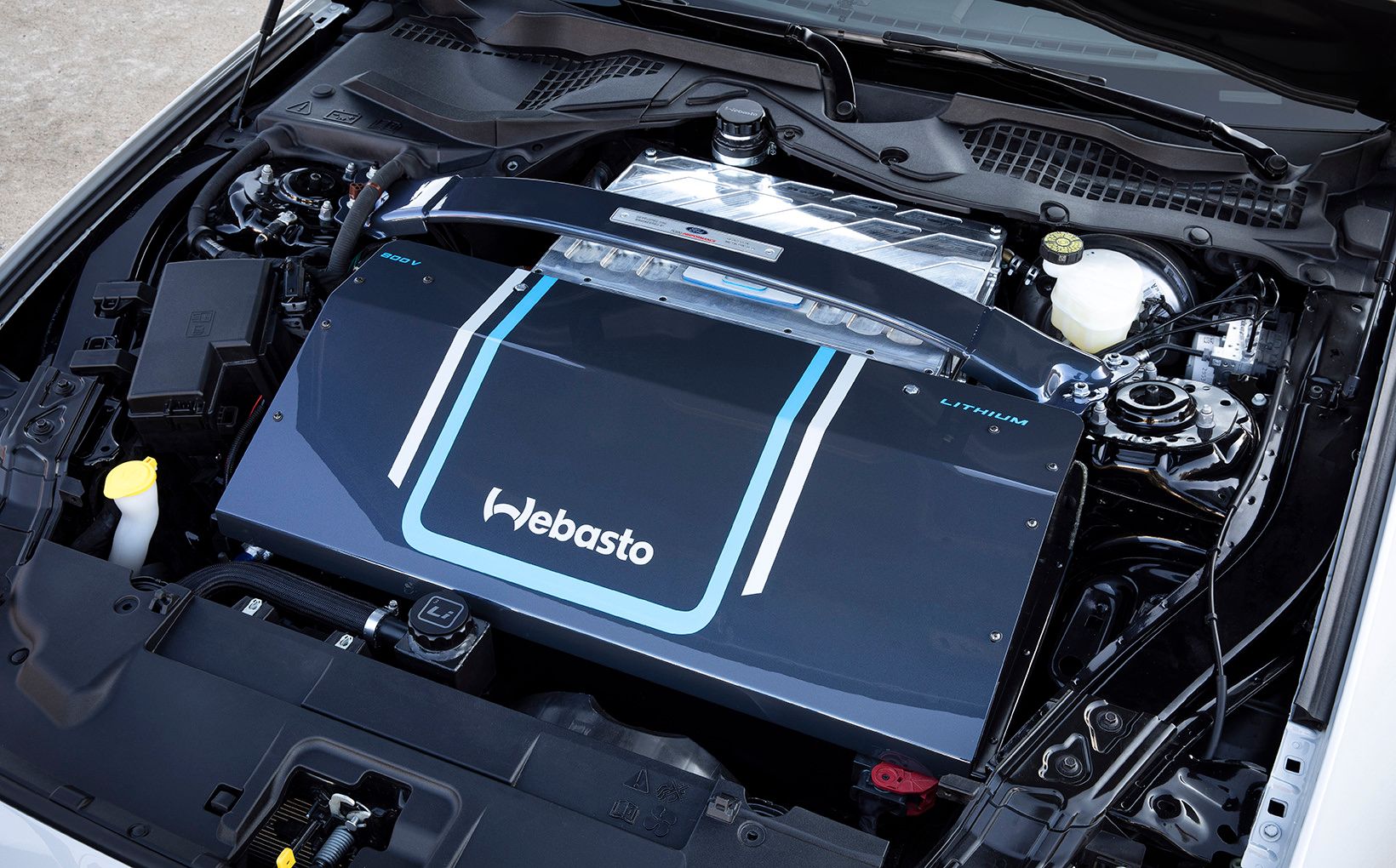 The all-electric powertrain packs a serious punch, with a monstrous output of 617kW/1356Nm.

Even the hardcore, supercharged Mustang R-Spec – due to land in Australia early next year – can’t come close to matching the Lithium concept, with its estimated output of around 522kW/827Nm.

To keep the Lithium concept slightly grounded in its petrol-powered roots, a six-speed manual gearbox is fitted in place of a single-speed transmission found on most EVs, more as a nod to the regular Mustang as opposed to serving a practical purpose.

The Mustang Lithium concept has been designed in collaboration with parts supplier Webasto, and is being produced to test the capability of Ford’s battery and thermal technologies. 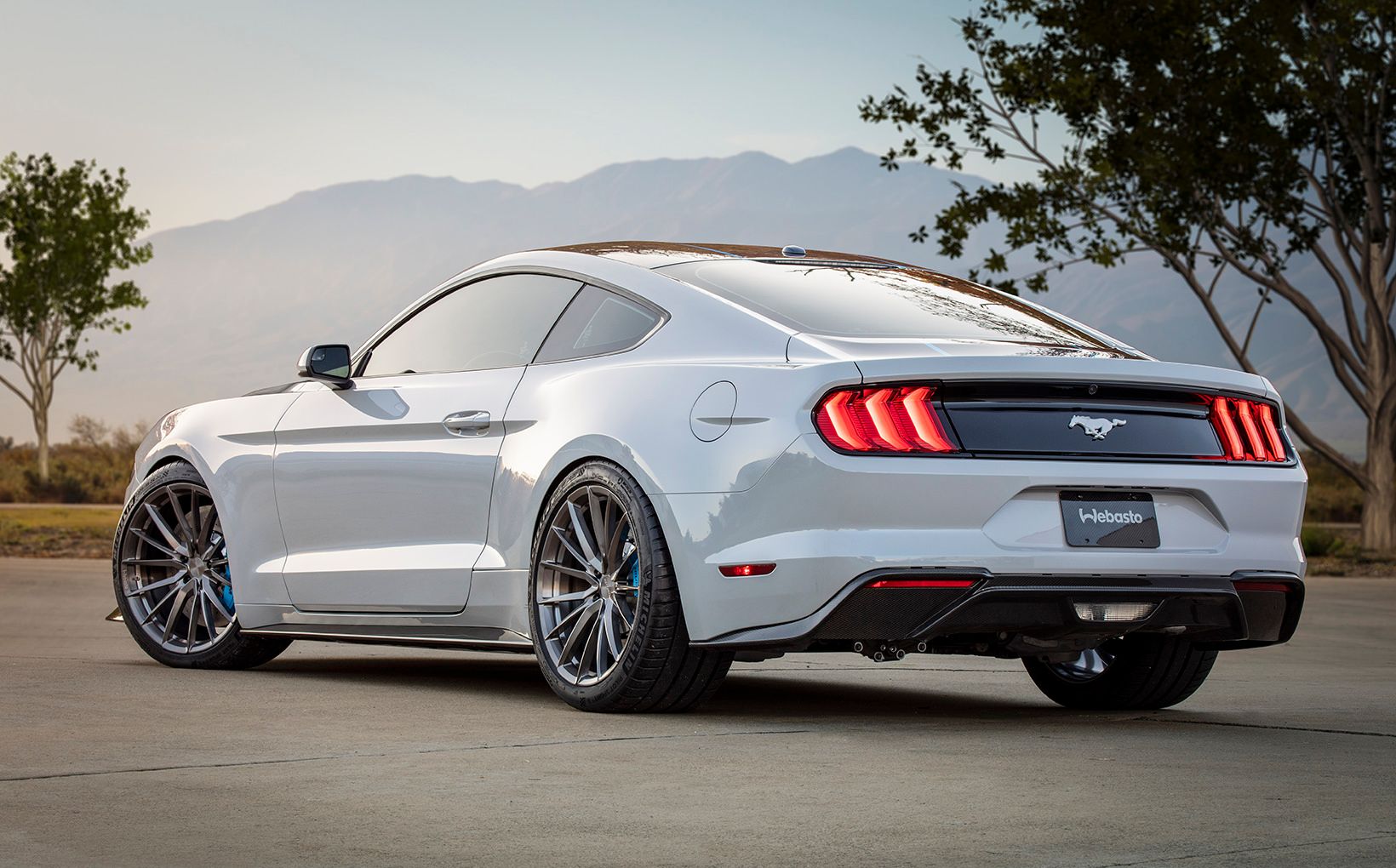 Unfortunately, the Mustang Lithium concept is a one-off, and will not make it into production.

Sadly, the concept is not slated for production, but rather plays a developmental role for the brand as part of its $11.5 billion investment into electrified technologies, that also includes the recently revealed Mustang Mach E crossover-SUV.

Ford has not yet released any other performance figures for the Mustang Lithium, only saying that it will feature “stunning quarter-mile acceleration”, which we are inclined to believe given the powertrain’s monstrous outputs.

Ford chief product development and purchasing officer Hau Thai-Tang said the brand wanted to put a new twist on one of its most iconic nameplates. 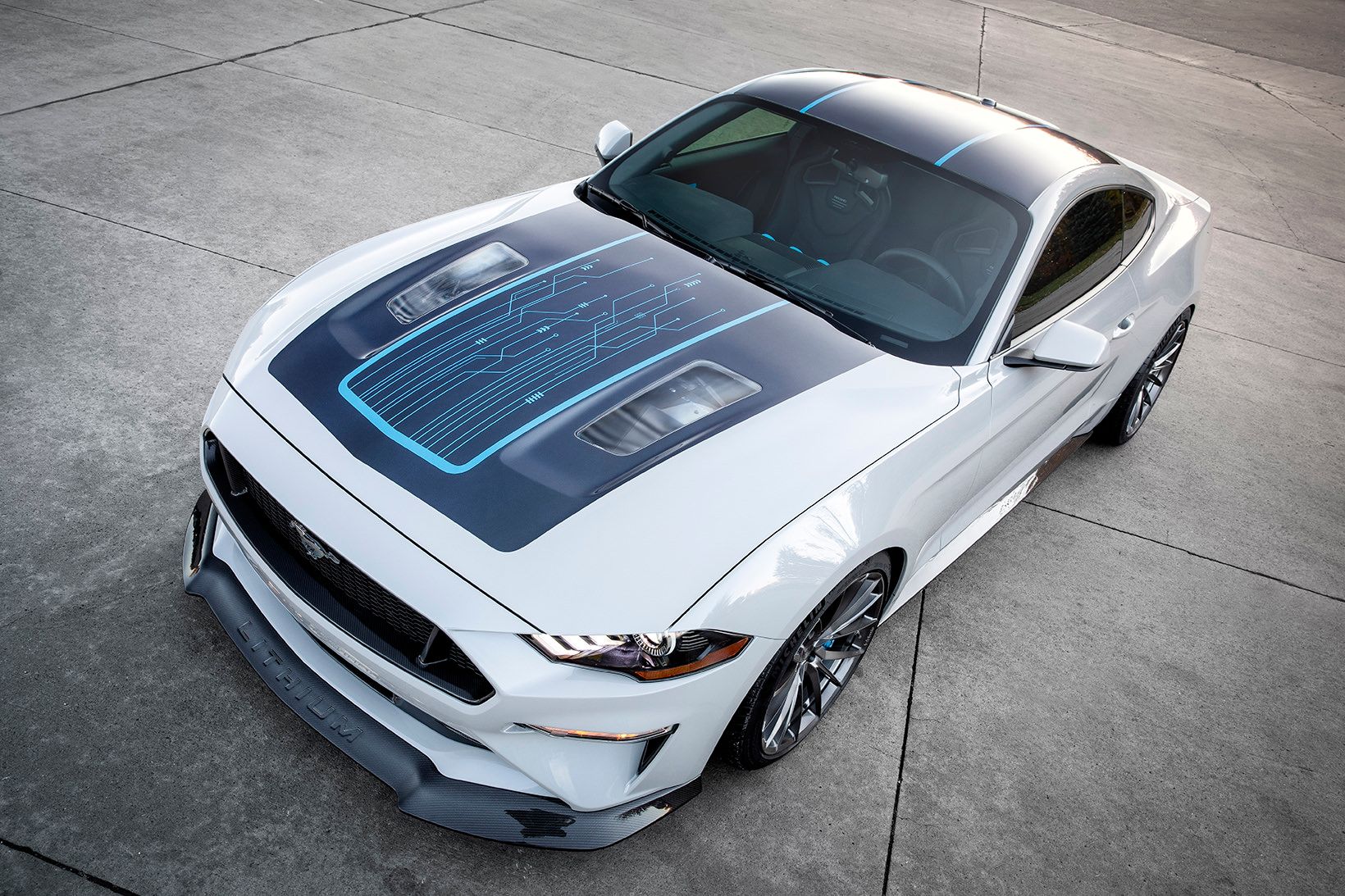 No zero-to-100km/h times have been given by Ford, however it is safe to assume the Lithium concept will be able to keep up with the best the supercar segment has to offer.

“This one-off Mustang prototype is a great opportunity for us, together with Webasto, to showcase to our customers what a new electrified powertrain can do for performance in a car they already know and love,” he said.

The Mustang Lithium seems to be an attempt to catch up to the likes of Tesla which has got the jump over most mainstream American manufacturers in the EV space, and Ford has even developed its own high-performance driving mode to match Tesla’s Ludicrous mode.

Called Beast, it is the most performance-oriented of four driving modes, which also include Valet, Sport and Track. 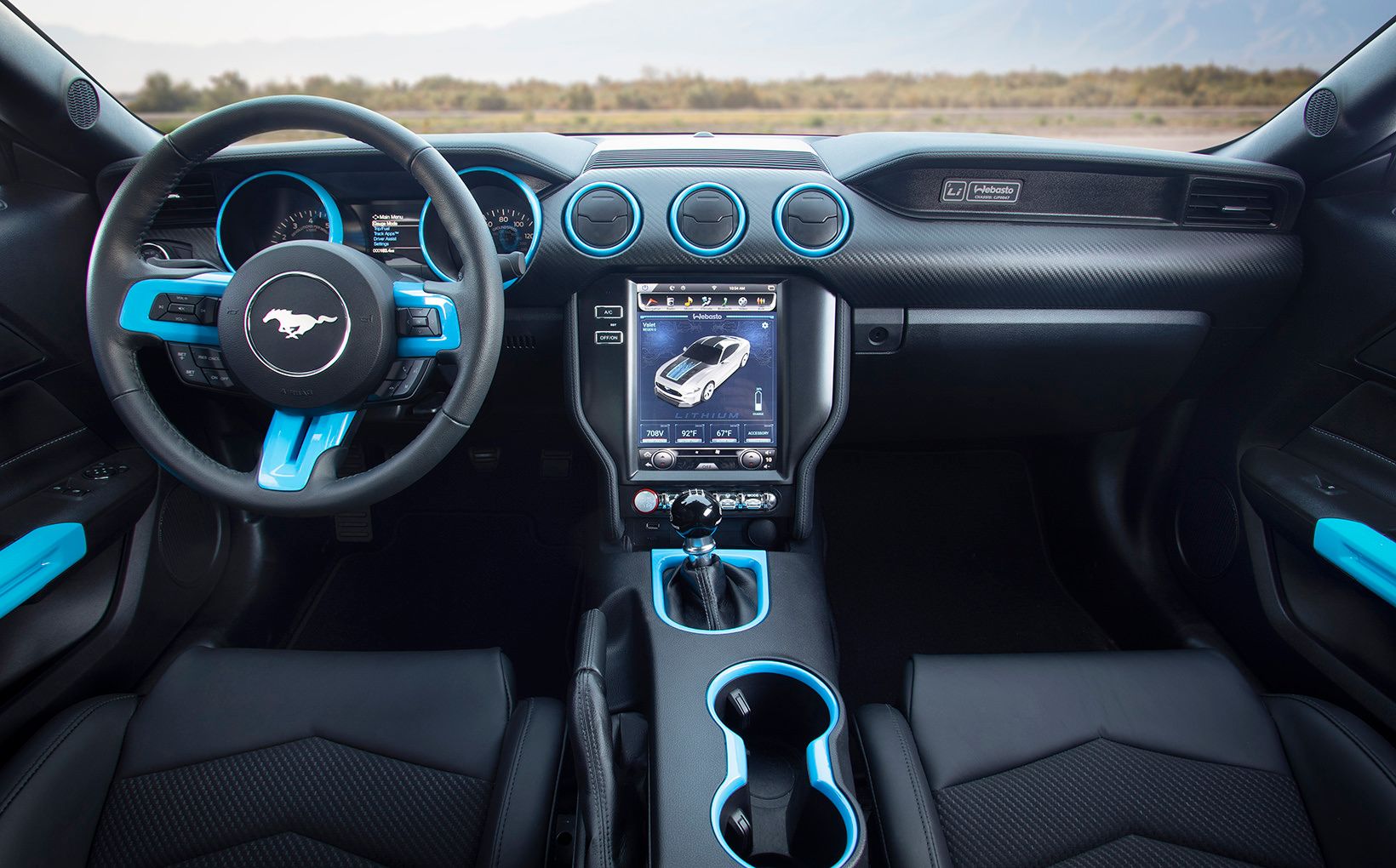 Unlike any other EV, the Mustang Lithium concept comes with a six-speed manual gearbox.

Power comes courtesy of a n 800-volt Webasto battery that is capable of discharging up to one mega-watt of energy, around twice as much as most other EVs.

Power is channelled to the rear wheels via a single PhiPower dual-core electric motor where most other car-makers will opt for multiple motors, which helps save weight and, according to Ford, generates less heat than other systems.

To handle the immense power and torque coming through it, the Getrag six-speed manual has been developed with the drag strip in mind, and features billet-steel innards. Ford Performance half shafts and a Torsen differential help ensure power is channelled to the road without broken internals and a huge waft of tyre smoke. 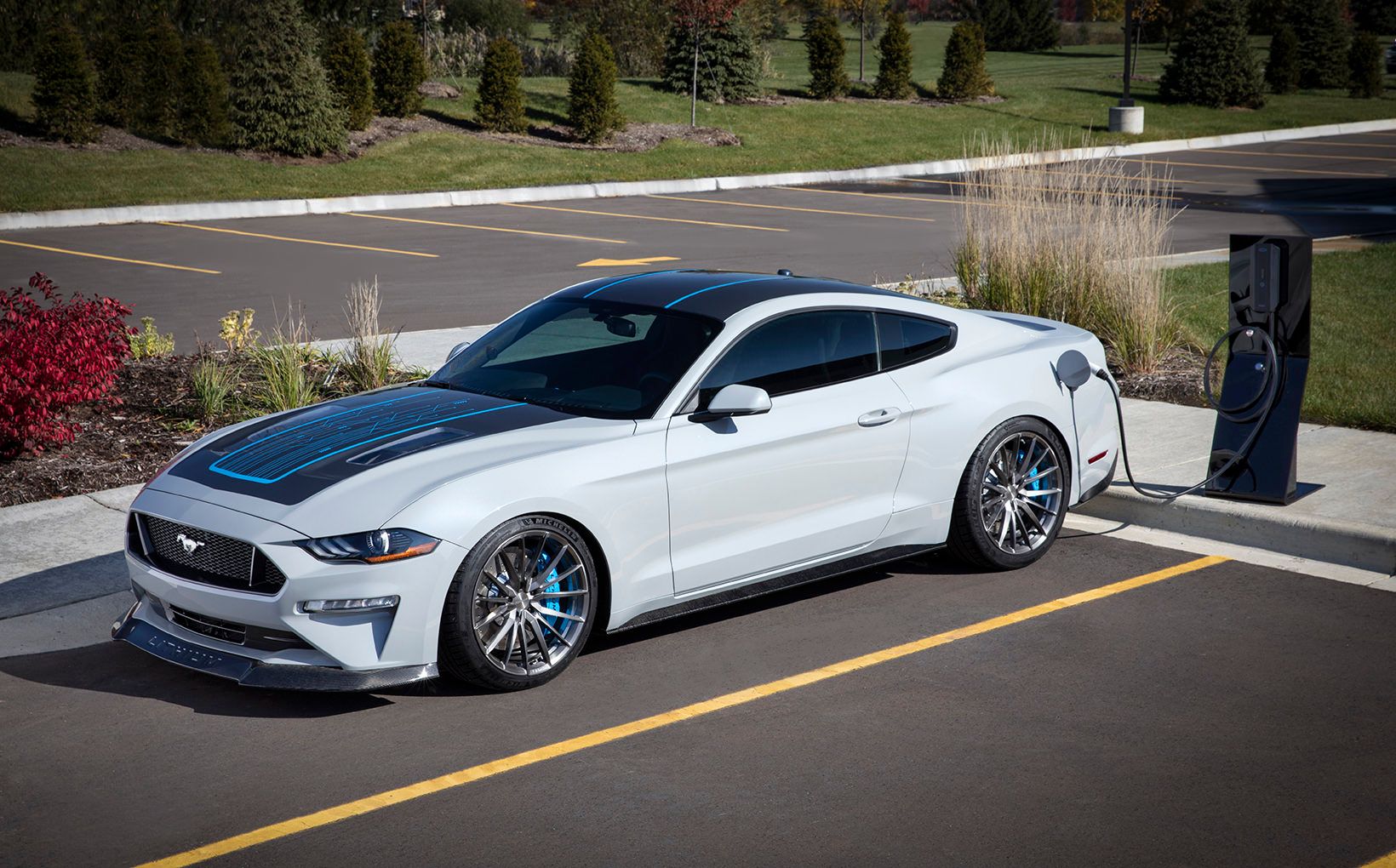 Inside, the Lithium is differentiated by a number of blue trim elements and a portrait-style touchscreen.

The Lithium concept is a far cry from the first Mustang that was released in the mid-60s, the most powerful of which produced 202kW/423Nm from its 4.7-litre Windsor V8. 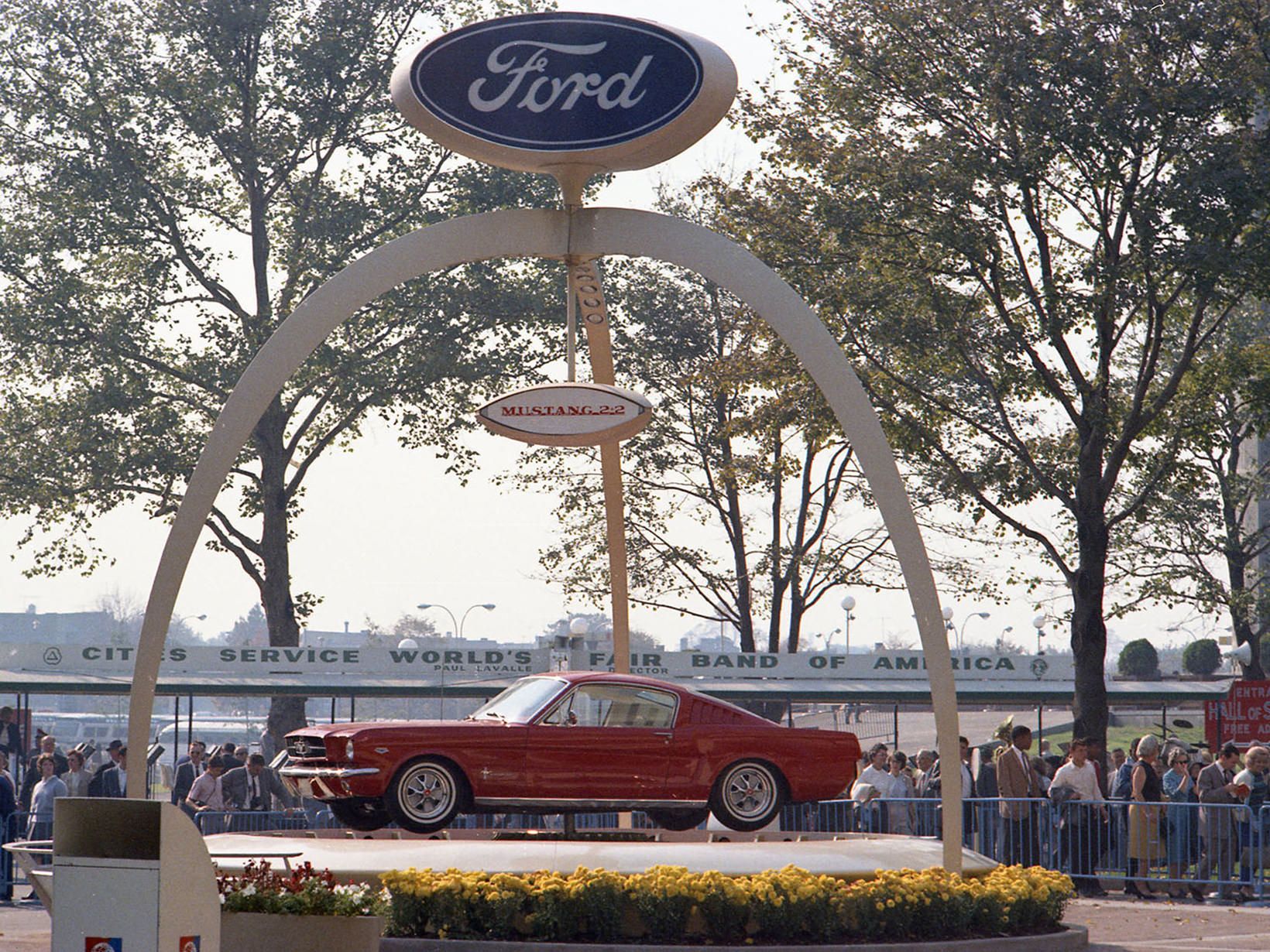 The original production Ford Mustang was first introduced at the 1964 World’s Fair.

The first right-hook Mustang arrived in Australia in 1966, and over the course of six generations has embedded itself into popular culture through movies such as Goldfinger,Bullitt and Gone in 60 Seconds, and songs like Mustang Sally.

The current, sixth-generation version arrived in Australia in early 2016 and found sales success Down Under, with Ford offering both the 5.0-litre V8 and a 233kW/423Nm 2.3-litre turbo-petrol four-cylinder in either Coupe or Convertible body styles.

While the Lithium concept is not slated for production, its emergence, as well as the reveal of the Mustang Mach-e SUV, suggests electrification is a matter of if, not when, for the legendary Pony Car.