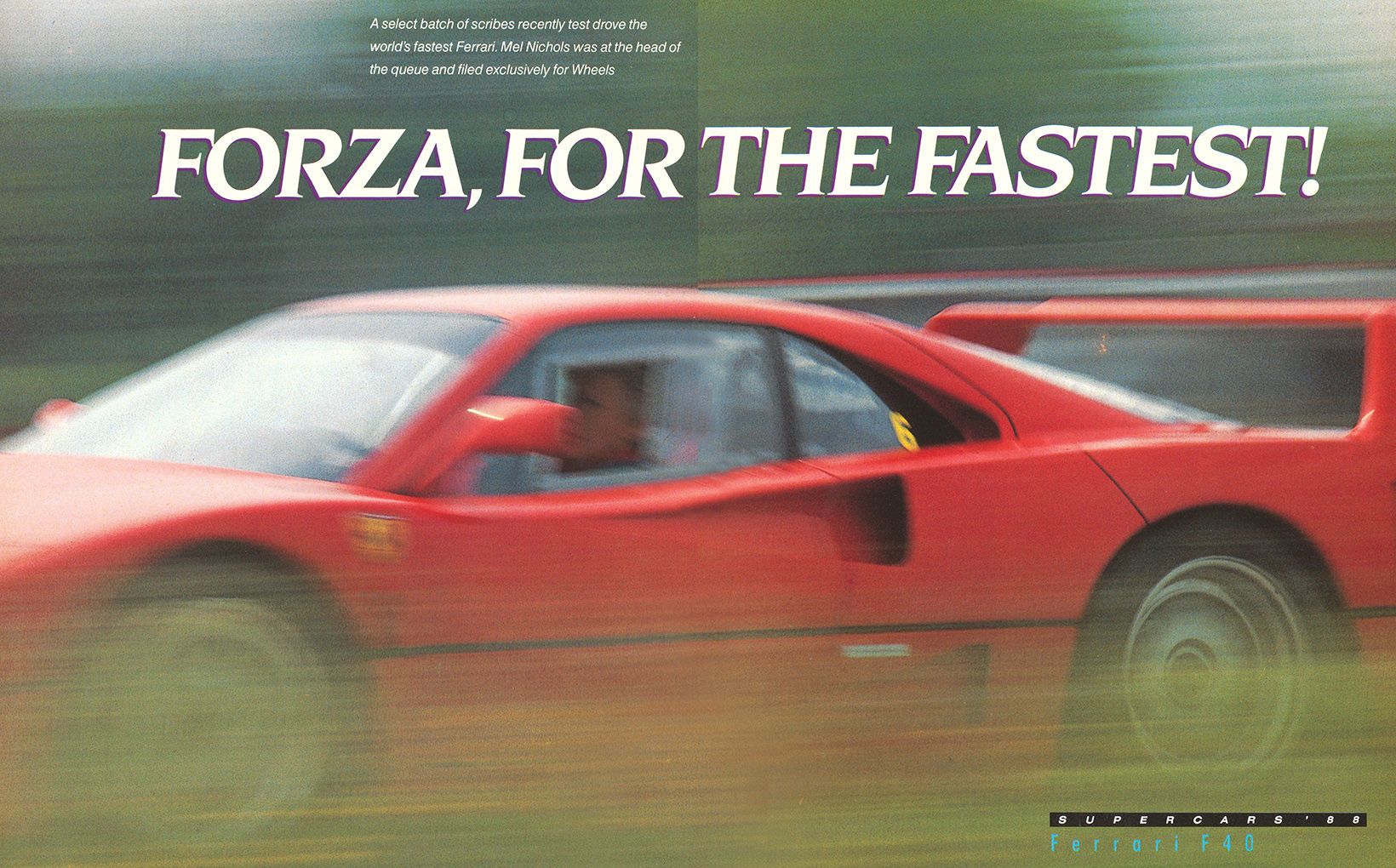 How easy it is!

After the trepidation and wariness about driving the fastest Ferrari ever built for the road, it turns out to be such an effortlessly stirring experience.

Wariness? Well, the twin turbo V8 just behind the F40's seats punches out 356 kW (on 478 horses) at 7000rpm. Its torque is a staggering 578 Nm at 4000rpm, and all of this is in a two-seater weighing about 100 kg more than a Golf GTi. Above the snarl of the engine I'd heard the intermittent chirping of the rear race-bred Pirellis as they were pushed, despite their 13-inch width, to the verge of wheelspin all the way through first and second and into third. And, just before it was my turn to squeeze into the driving bucket and cinch up the racing harness, Ferrari test driver Doriano Borsari happened to mention that he'd recently clocked the F40 at a two-way average of 326 km/h.

Compared to the four-wheel-drive computer-controlled Porsche 959, the F40 is a simple car. It is essentially a fairly light mid-engined two-seater, packing a great deal of power, with little out of the ordinary in its layout or construction. Some observers have condemned this simplicity, and Ferrari's motives, as a cynical moneymaking exercise hatched after Maranello's marketing men saw how much buyers were paying second hand for the limited edition 288GTO – and how hotly in demand the 959 was at $360,000.

Ferrari dismisses these suggestions as ludicrous. Giovanni Perfetti, from the marketing department, says the F40 harks back to Ferrari's roots. "We wanted it very fast, sporting in the extreme, spartan and not particularly comfortable," he says.

Whichever way you look at it, the performance potential and desirability of a late- '80s Ferrari packing almost 500bhp in a composite materials body designed by Pininfarina wasn't lost on a host of prospective buyers. As soon as Ferrari announced a plan to make 400 F40s more than 3000 people, clutching fat deposits, began haranguing dealers. Although Ferrari has now lifted the run to 950, they will go only to faithful and long-standing Ferrari customers. In the UK, the delivery price is £163,000 ($A390,000}. Sixty of the 300 Britons eager to pay will be lucky, and so will 400 Americans. In Australia, there will be only six. 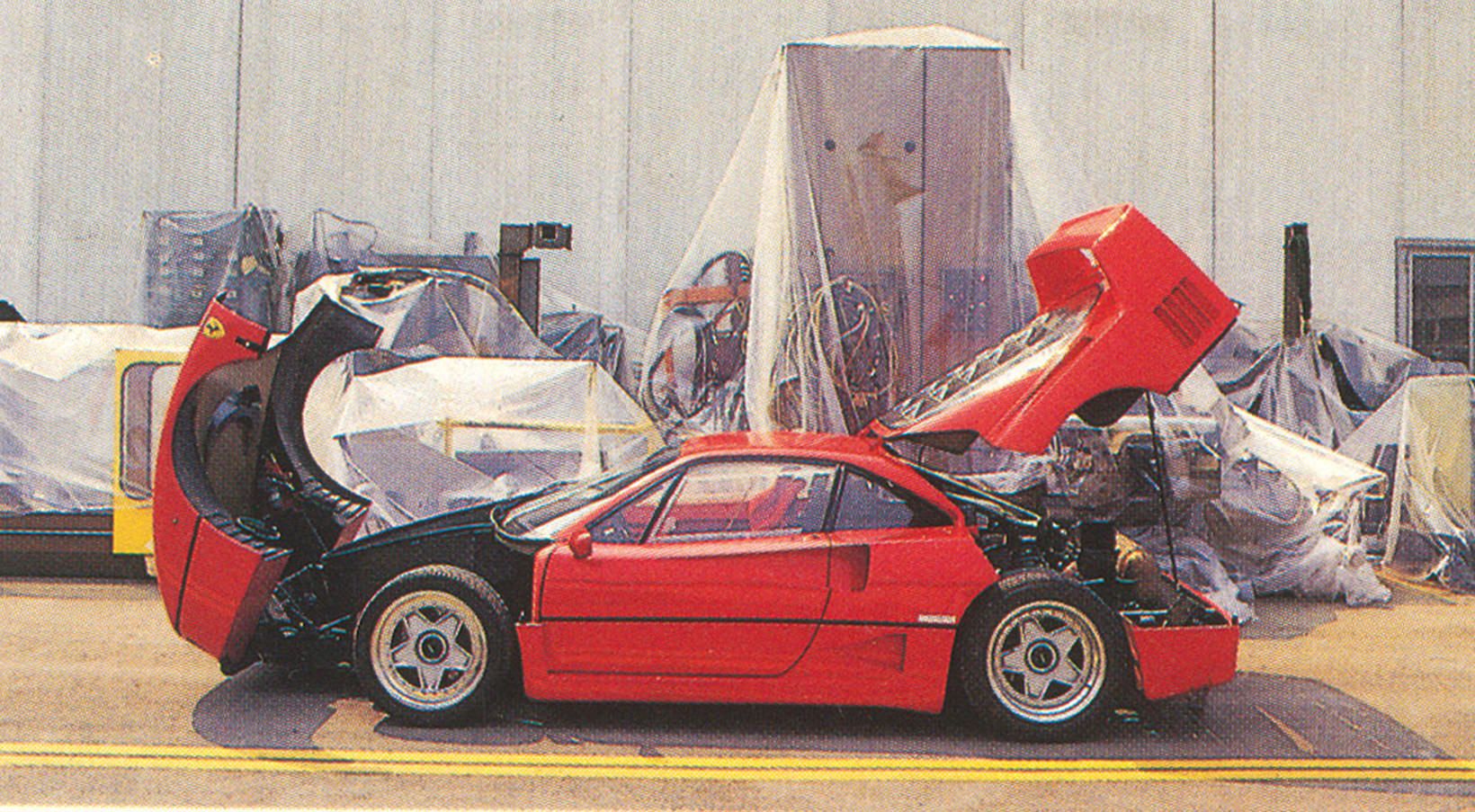 What are they getting? A car whose dramatic looks begin with a needle-like nose and flow on over a 328-like centre section peppered with NACA ducts to culminate in a vast rear wing; a car that finally steals the Countach's visual thunder. It's a mean car, but there's beauty in its balance. Using materials and techniques adopted from Ferrari 's Formula One cars, the F40 is built by cladding a particularly strong and rigid tubular steel platform chassis and cabin section - a kind of cage that enshrouds the occupants and provides the mounts for the suspension and the engine. The panels, moulded from light but immensely tough Kevlar, are bonded to the frame with advanced adhesives. The materials and methodology meet Ferrari 's objective of cutting weight by 20 per cent while increasing torsional rigidity threefold over an all-steel construction.

Just as the car's shape, if not its construction, is inspired by the 328 and the GTO Evoluzione that flowed from it, so the engine's roots rest there. The 90-degree all-alloy V8's bore has been enlarged, taking its capacity from the GTO's 2855cm3 to 2936 cm3, and its two watercooled IHI turbochargers deliver boost to 1.1 rather than 0.8 bar. Its new crankshaft is ducted for better lubrication; the con rod bushes are silver/cadmium; the pistons have a pronounced squish effect and are cooled by oil jets directed inside their crowns; the 32 valves have hollow stems and heads; and the inlet's eight butterflies operate as one. 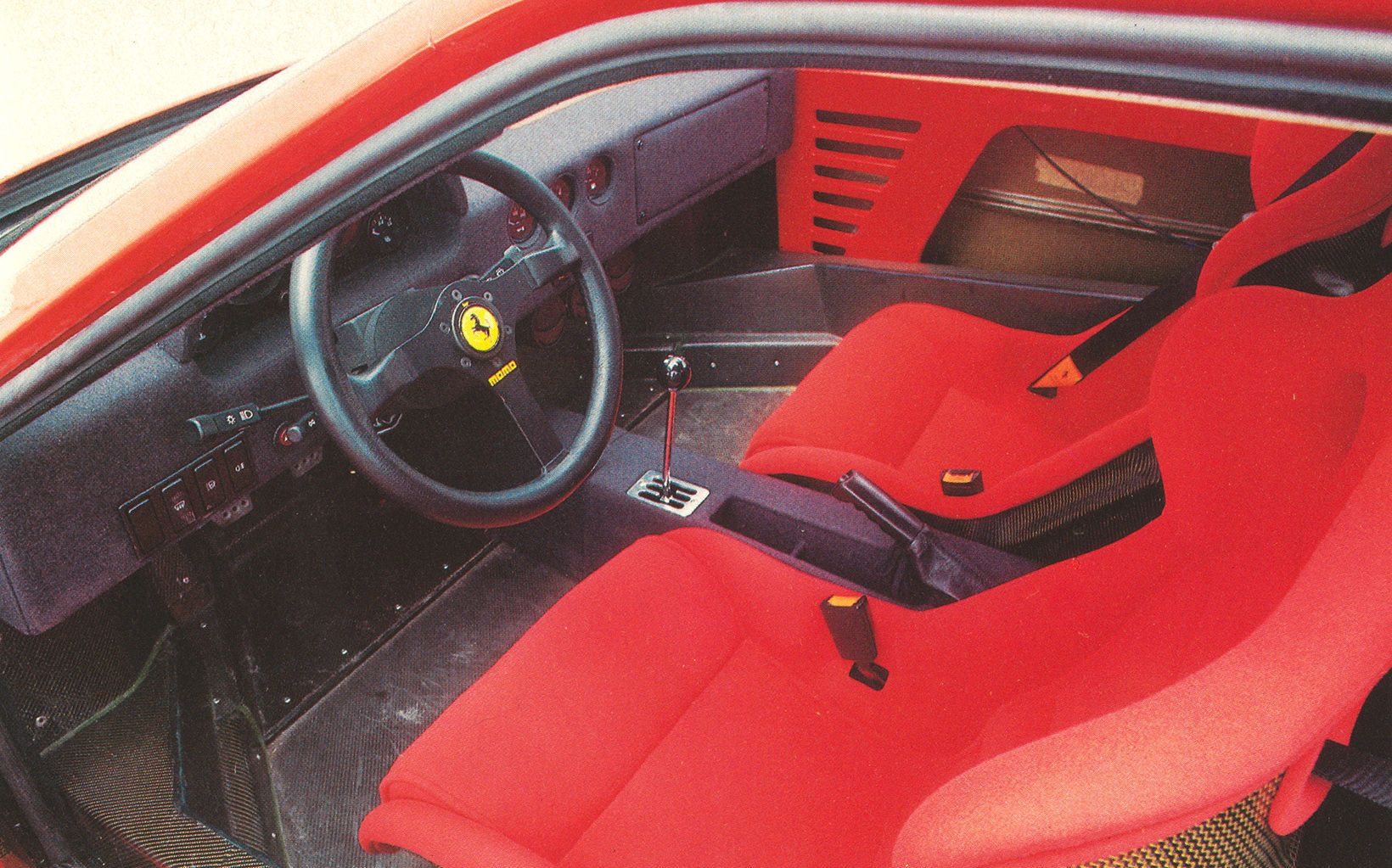 The complex Weber-Marelli injection and ignition system has sequential injection, twin injectors per cylinder and many features used in Formula One engines. Basing its calculations on butterfly angle and engine revs, it also measures the supercharging pressure before allocating the precise measure of fuel.

The F40's suspension follows the proven and rarely-bettered path of wide-based and unequal length upper and lower wishbones. There are anti-roll bars at both ends and the suspension components are fabricated like works of art. At the rear, the coil spring and damper units rise inwards from the top of the alloy upright; at the front, they sit between the upper and lower wishbones. The steering is, of course, rack and pinion and the massive vented and drilled disc Group C brakes have alloy centres bolted to their cast iron braking surfaces to reduce unsprung weight. 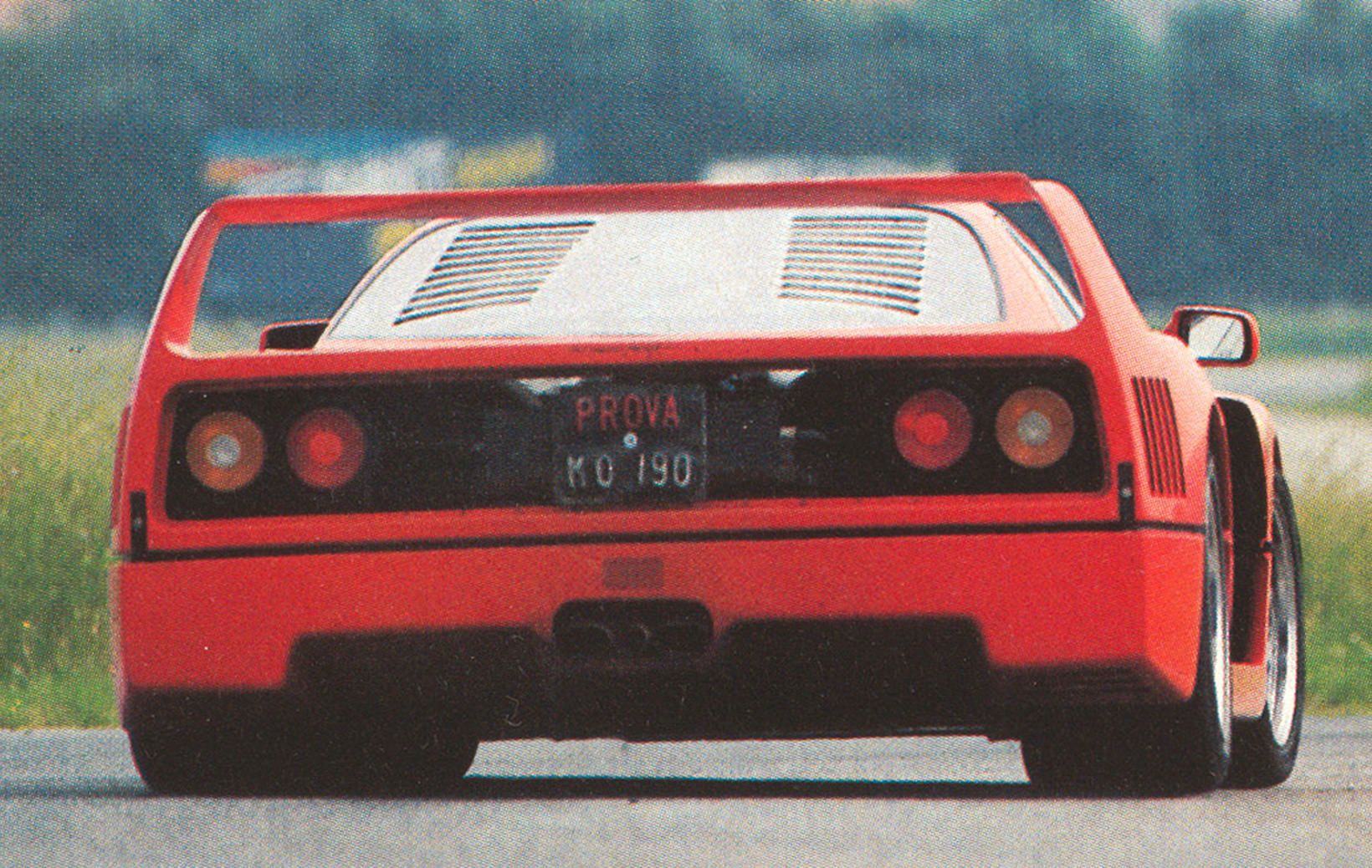 It's not easy getting Into the tightly moulded bucket seat. But owners will be fitted for one of the three sizes available.

The key operates only the fuel and electrical systems. The starter responds to a small, squishy rubber button on the dash just to the right of the wheel. Press it once and the V8 snaps immediately into life and idles smoothly. The clutch works through a tiny, firm stroke. When you feed it out, it takes up evenly and easily; you're not going to stall. The shift, as you go up through the gears for the first time, has the familiar notchiness of the 328, but it's not too difficult. Nothing hard or nasty about the drivetrain.

There's a pleasing naturalness about the steering. It's direct, smooth and not too heavy. Turn it and the car responds flatly and without a trace of lost motion. Everything feels right - perfect - there. In a surprisingly short time you feel ready to start pressing on. 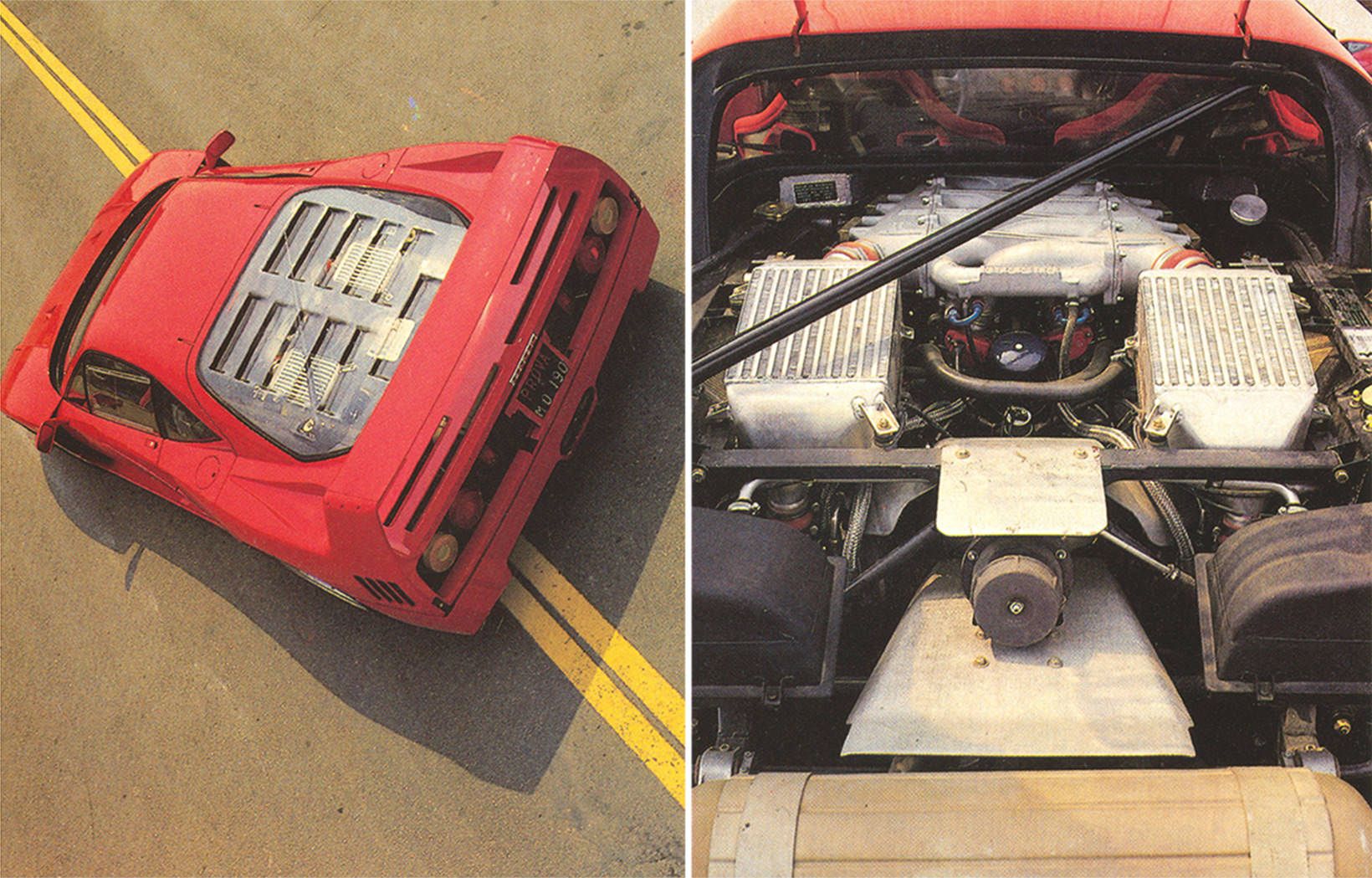 And when you do that, slowing back to a trickle and reengaging first and then flooring that tall, drilled metal throttle, the F40 runs through a short period of tameness before coming up to 3000rpm. It builds, then as the tachometer needle nudges 3800 the tornado begins to unwind. There's a frantic rush as the car grabs the ball and takes off, pinning you hard into the seat. It's smooth, but God, it's potent and you keep your eyes darting between the road and the tachometer, seeing that needle slash around towards the 7750 redline.

The take-up into the next gear is flawless, and with the turbos cranking hard, the blast of acceleration just goes on again and you seem to be in a blur of time conquering distance, gearshifts and noise. Not that the noise is overwhelming, but if you switch your attention to it for a moment you're well aware of the level of the growl and then the whirr and the great hollow wail. It has the tonal quality of a Formula One engine, if not the sheer ferocity.

But, to be honest, when you're behind the wheel there's too much else to consider, at least when you're on an open and challenging track. It takes only the first couple of bends to demonstrate the precision and response of the steering, and the sheer grip that's lurking beneath you. You start coming into successive bends harder and find that the F40 edges into a nice, modest, deliberate-feeling understeer. The feel is such - through the wheel and somehow through the whole car - that you know instantly what's happening. And you can choose whether you lift or power on. If you lift, the nose tightens instantly and obediently, but without a trace of viciousness. Even if you come off deliberately abruptly, having had a lot of power on, the tail moves but does not snap out. The car has poise and balance and manners, not to mention sheer roadholding, and it's all with such a satisfying meaty feeling.

If you choose to power on, the car pushes swiftly through its understeer and tightens progressively through to full power oversteer. The wonderful thing is that you can feel it, degree by degree, and balance the attitude as finely as you like. The communication comes through the seat as beautifully as it does through the wheel, and precision of the throttle response is as keen as that of the steering. 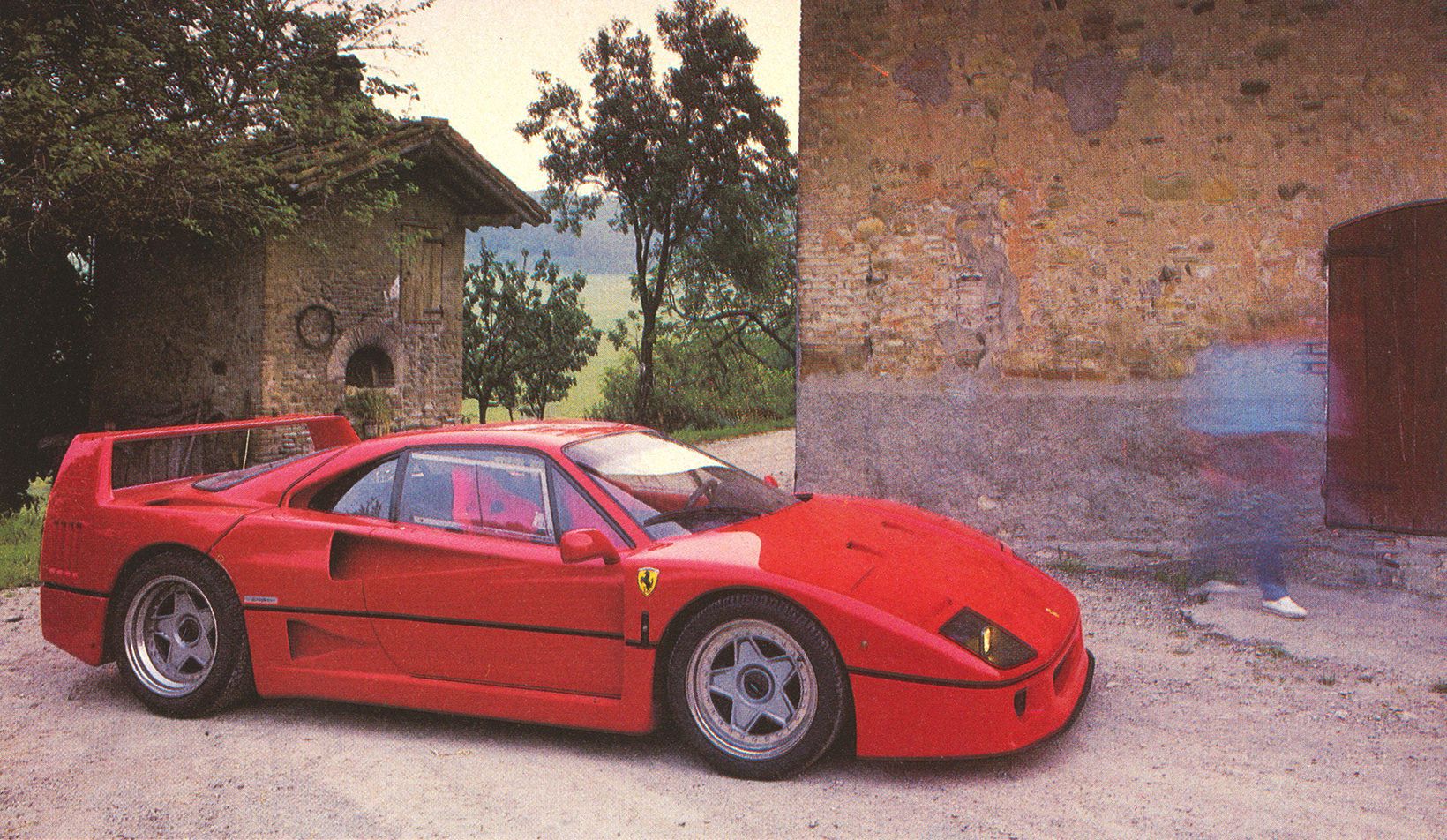 What matters, though, is how many revs you've got. If you've stayed in an overly high gear for a tight bend and the revs drop much below 3000, the engine feels flat and you wait, in the understeer attitude, until it climbs back to around 3500 before you've got the power you want. From anywhere upwards of 3800, the response is electric and you're driving. The F40 is the most delightfully precise and easy car to drive, as well as being downright exciting.

As you open up the power and feel the rear edging round in complete obedience, you simply adjust minutely with the throttle or counter by winding off lock and sweeping right out to the edge of the road. It's magical and you delight in the fact that this stunningly potent car is so accessible. Within just a few laps, the wariness has long been despatched in favour of respect. 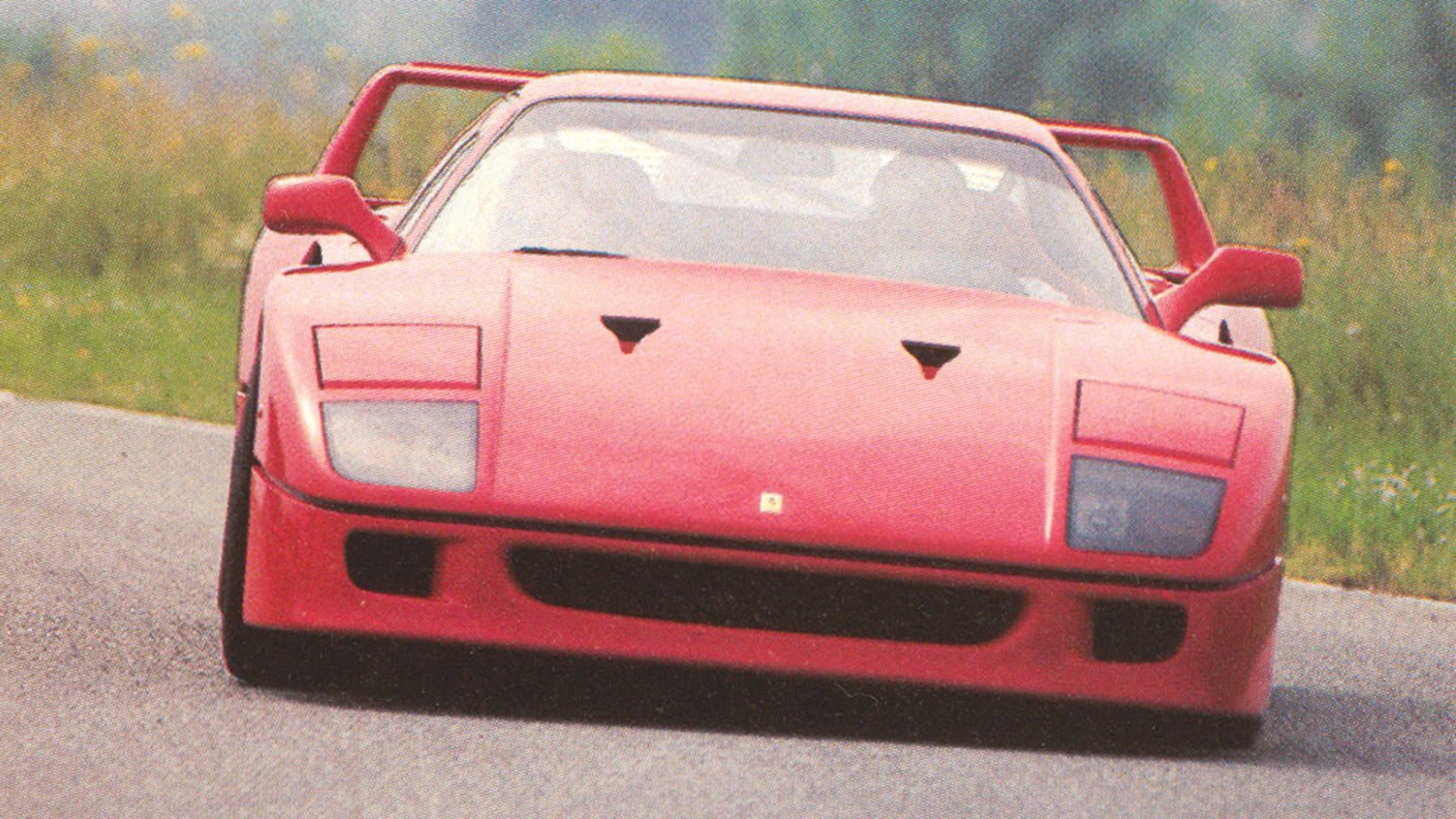 Beautiful outside, spartan within. Nothing hides raw carbon fibre on the inside. Inner door openers are mere cord-tuggers.

Opening right up out of the bends means the most ferocious blast down the straights - Ferrari gives the 0-200km/h time as 12 seconds- and you need to be watching and reading the distances accurately, for it can be so very easy to go too fast. This car gives; it does not fight. It's impeccably stable at speed too - at least up to the 260 km/h or so that's possible at Fiorano test track. What becomes clear is that the F40, because of its enormous rigidity and more recent development,\ is a less nervous car than the GTO.

I do not yet know whether the F40 is intractable in traffic, fearsome in the wet, uncomfortably harsh on bumpy roads or too noisy on long journeys. It has no luggage space and getting in and out is awkward and it may well be difficult to live with if you try to use it too frequently in the wrong conditions. But I do know this. On a smooth road it is a scintillatingly fast car that is docile and charming in its nature; a car that is demanding but not difficult to drive, blessed as it is with massive grip and, even more importantly, superb balance and manners. You can use its performance - the closest any production car maker has yet come to race car levels – and revel in it. A rich boy's toy it may be, but given the right conditions it is the very essence of a sports car.