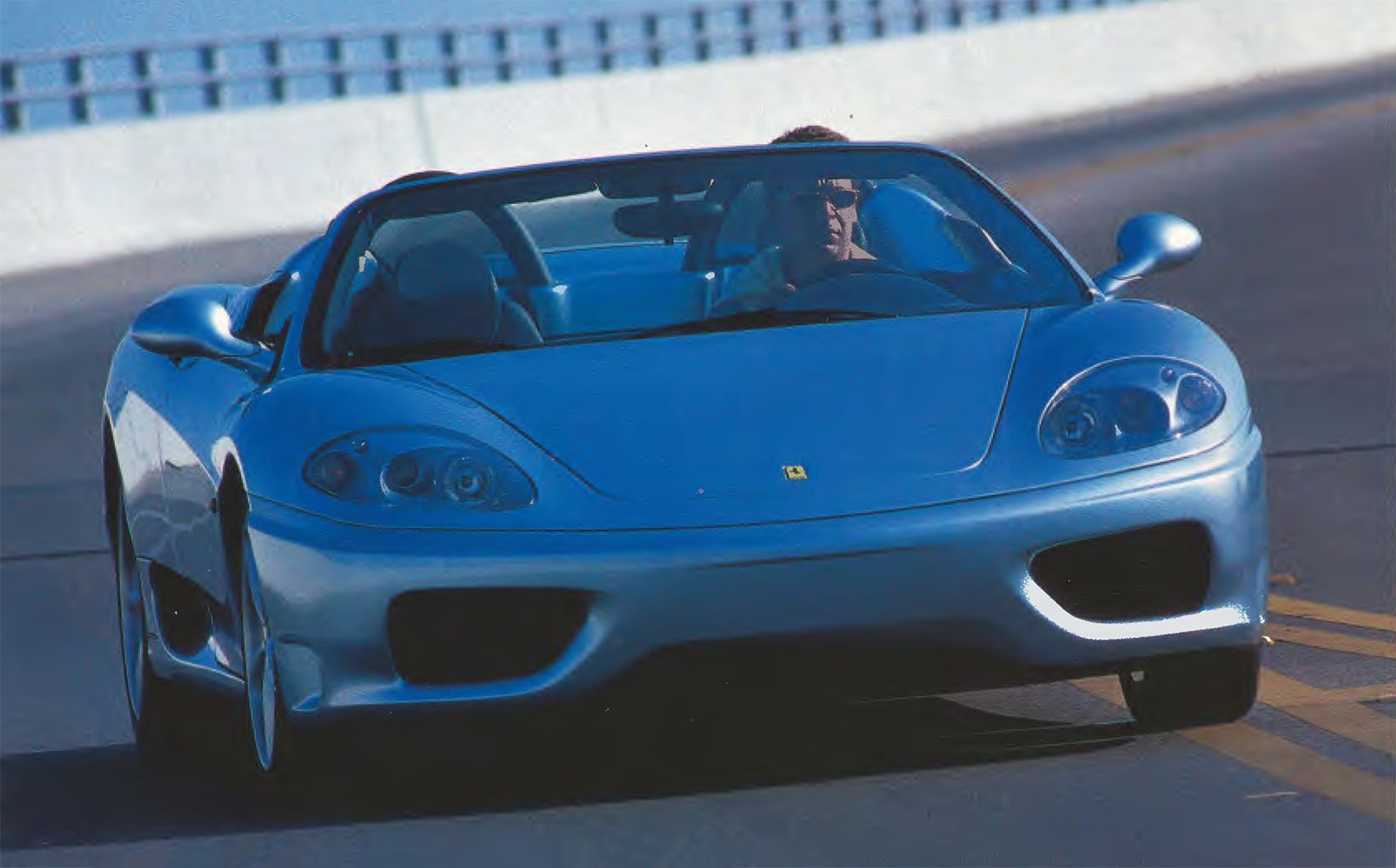 There will be one pleasure that only people who buy Ferrari's new 360 Spider will be able to experience: blasting through tunnels. It's the closest any mortal comes to understanding how obscene the sound of Schumacher's Fl Ferrari might be screaming through the Monte Carlo tunnel.

Coincide arriving at the tunnel entrance with picking up the lowest possible of the 360 Spider's six forward gears. Then blast up through the gearbox at 8500rpm, the screaming engine's echo multiplied a thousand times. The sound, so chaotic it rips at the body and sets the eardrums quivering, leaves you breathless for more. Call it childish pleasure, yet once sampled, this sound generation is addictive, an aural drug.

No coincidence that on the autoroute above Monaco, where Ferrari launched the new 360 (no Modena) Spider, there are dozens of tunnels of varying lengths within 25km. Enough to perfect the noise-multiplying technique. 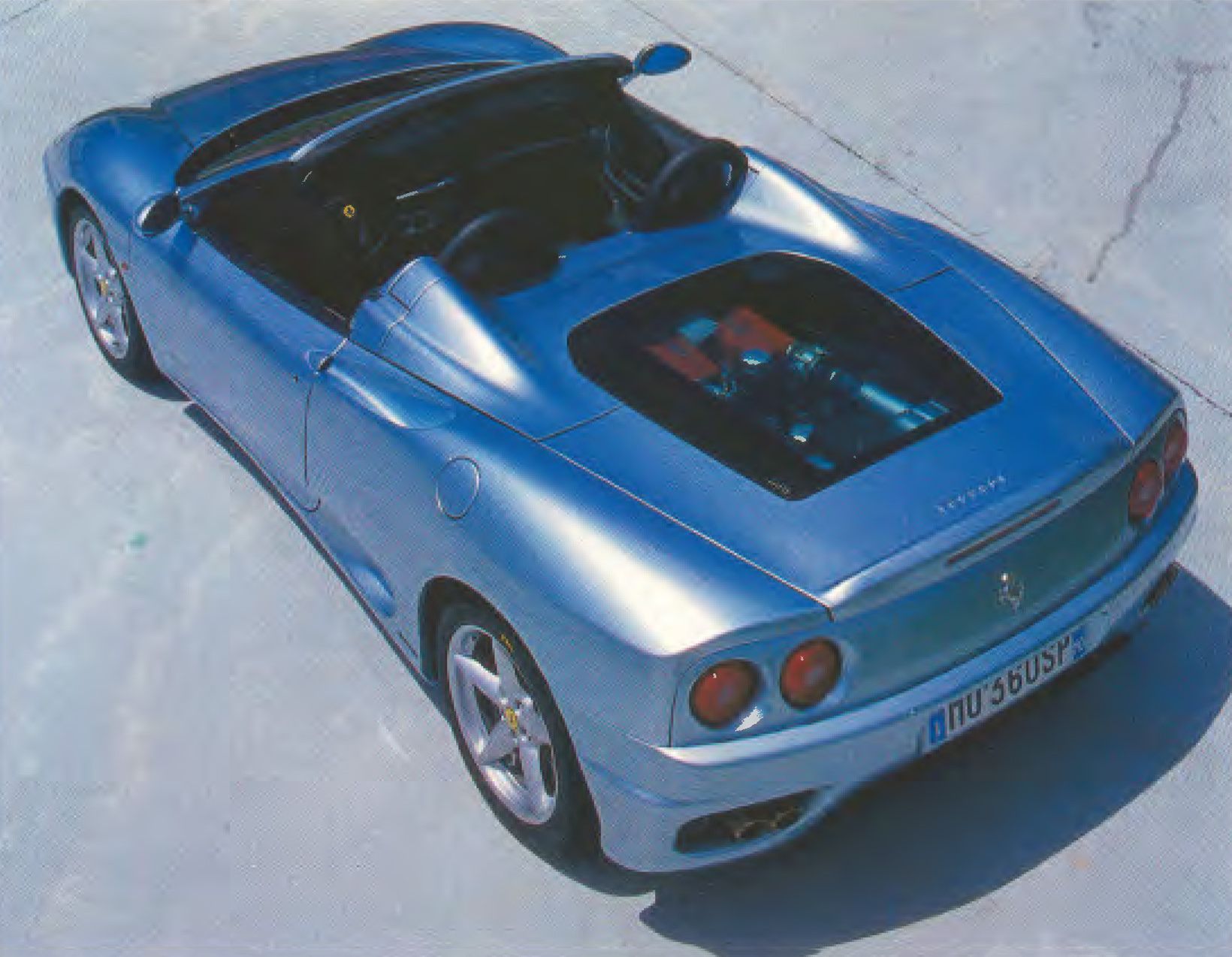 There was always going to be a topless 360. Pininfarina styled the coupe and spider simultaneously to allow the engineers to maximise the benefits of all-aluminium construction. At 1450kg, the new Spider weighs around 60kg more than the Modena, but the real advantage of the alloy body is better explained by the 250kg body-in-white, 95kg less than the F355 despite a 29 percent improvement in torsional rigidity.

Ironically, the 360' s hood was developed as a module by CTS (Car Top Systems), a joint venture company between Porsche and Mercedes-Benz. The complete module arrives from Stuttgart preassembled. Ferrari claims the roof goes through its electro-hydraulically operated contortions in just 20 seconds (not surprisingly, the movement is a slightly more complex version of the Porsche Boxster). It's a thoroughly professional execution that works brilliantly. The structure feels rigid and the steering wheel never moves - only a slight shiver from the top of the windscreen over irregular surfaces disturbs the body. Not quite the best yet, but close.

Changing the roof-up profile to a near three-box shape takes the Cd from the Modena's 0.33 up to 0.36, despite the addition of a small lip on the trailing edge of the engine cover. Open, it rises to 0.44. You still get to see the engine through a now flat glass screen built into the engine hood. Topless or roof erect, the Spider's proportions emphasise the 360's long tail and forward driving position.

Nobody will deny the Spider's presence, yet it's not a classically pretty Ferrari. One compromise is the retention of a plastic rear window, the only way to get the folding roof to fit in the available space.

However familiar you may be with the 360 Modena, nothing really prepares you for the Spider. The dynamics, extracting the ultimate in G forces, simply aren't as important as they are in the Modena. You can still drive the Spider hard; it's just not as natural an extension of the car's personality.

The lightness of the 360's steering still comes as a surprise. But, though it comes on the same Pirelli P-Zeros as the disappointing 360 coupe we compare to the 911 Turbo this issue, there's less nervousness. It's more confidence-inspiring; tum-in is less aggressive. There's no roll and the ride seems better able to cope with bumps. This car has real handling balance, though it doesn't telegraph the approach to loss of adhesion as well as a Boxster.

The biggest improvement is in shift quality of the paddle operated manual gearbox. The Fl change is easily the smoothest I've tried.

The V8 thrives on revs but it's also happy to amble, something the Spider inevitably will experience in full measure. Ferrari dain1S that there's a 0.1sec split to 100km/h between coupe and spider.

The 360 Spider is due in Australia in October. Sell the house and buy it for the drama of its operatic behaviour, and almost as a bonus you'll be getting a thoroughly practical sports car.