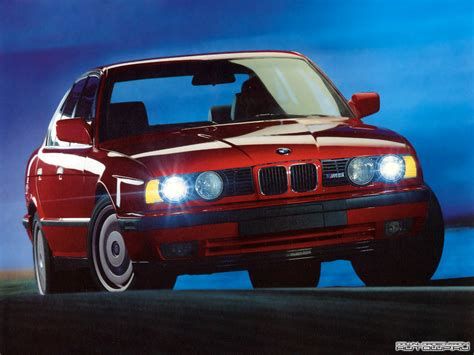 October 1984: Jet-lagged and suffering sensory overload on my first overseas trip, I wander the vast spaces of the old Lingotto factory where the Turin Salon is being staged. This is a different world from Australia, where the XF Falcon is still hot news.

Back home in Australia, the fastest factory Ford is a four-speed Falcon 4.1 EFI which can struggle breathlessly to almost 190 on the You Yangs speed loop. A factory issue VK Commodore V8 automatic can’t quite crack 200km/h at Lang Lang. Only Peter Brock’s hotrodded Holdens even aspire to the speeds at which the burghers cruise their BMW and Mercedes so nonchalantly on the autobahn.

In late 1984 BMW already made one of the two fastest sedans in the world, the M535i with its 230km/h V-Max. Who outside the Bayerische Motoren Werke could have foretold that just four months later at the low-key Amsterdam Motor Show, the Bavarian company would trump its own ace? Paradoxically, this new M5 was less extroverted than the M535i. But it was answering an automotive question no-one had yet thought to ask: if Ferrari and Porsche aren’t interested in creating a four-door supercar, why shouldn’t BMW? 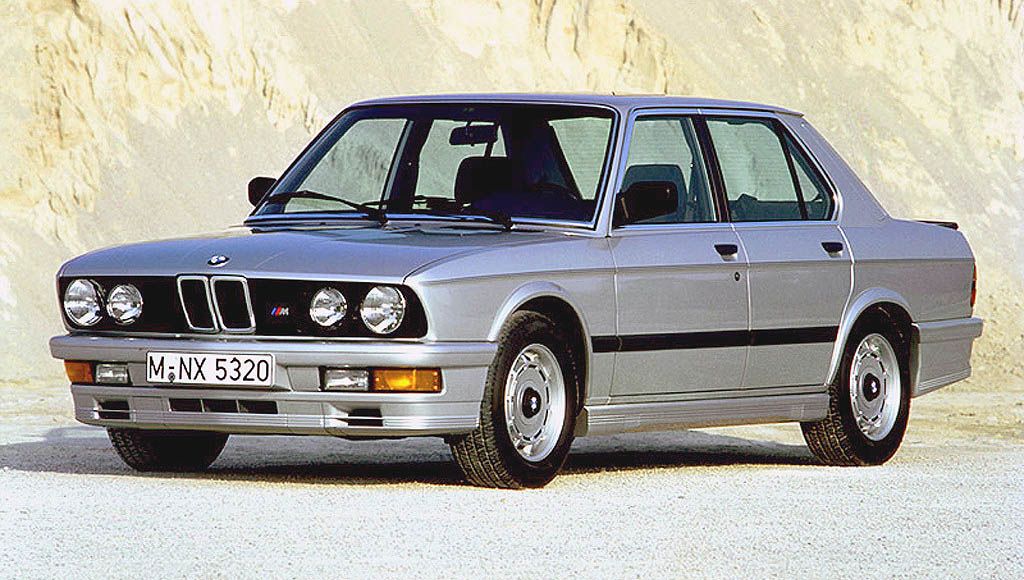 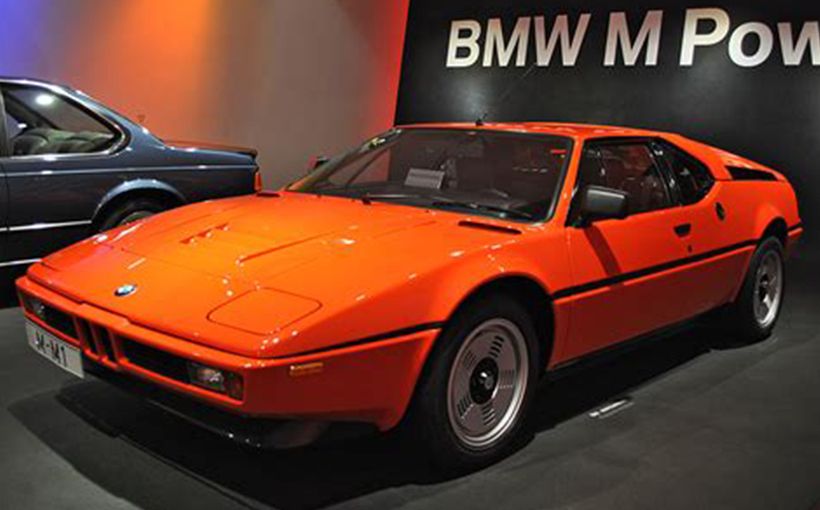 The M1 is arguably the most inspirational BMW ever made.

Arguably, the most celebrated car BMW had ever made before the M5 was the (1976) M1 supercar, a drop-dead gorgeous two-door coupe. Here was BMW Motorsport – the famous M division – on display. This was its first car. The heart of the M1 was its dry-sumped 24-valve 3.5-litre six, just possibly the most famous in-line six-cylinder engine in history (although for some it is impossible to look beyond Jaguar’s XK). It comprised a cast iron block topped by a light alloy head.

The M5 came to market five years after BMW ceased production of the M1. A mildly revised version of this awesome engine was simply shoehorned into the E28 Five-Series. Unfortunately, the visuals failed to convey the message. The E28 was a rather boxy sedan that looked faintly outdated even when brand new in 1981. There was a remarkable incongruity at work here. In a mid-sized sedan that looked less sporty than, say, an XE Falcon ESP, lurked sufficient performance to beat a 911 down the dragstrip. 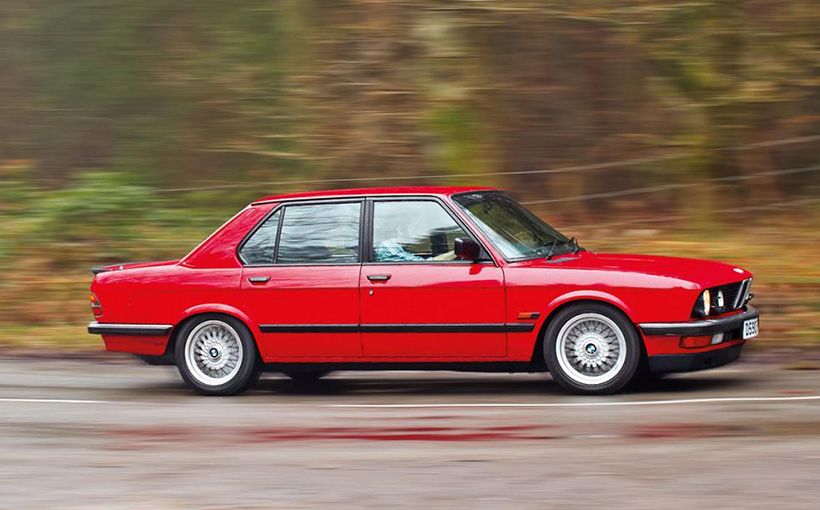 BMW has always offered stylish alloy wheels, but they are not always standard equipment!

Researching this story, I flicked through the 1985-86 edition of Automobile Year (number 33) until I found an image of the M5. At first, I couldn’t. All I found was a standard 535i, until I read the caption: this was actually the M5 in a conservative royal blue, looking utterly incognito. 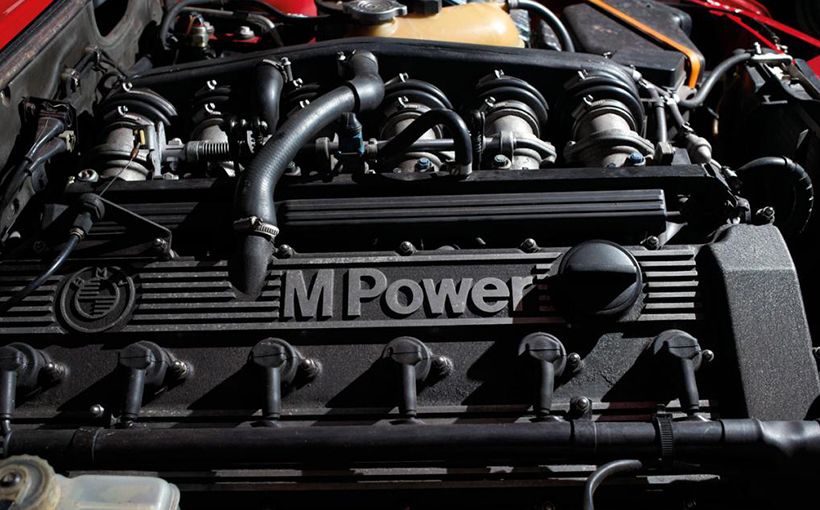 The heart of any M-Series BMW is always that superb engine.

The question is, why did BMW play such a subtle game with this phenomenal machine? This was the same Bayerische Motoren Werke that had given the world the in-your-face ‘Batmobile’  and the 2002 Turbo with its name spelled out in reverse on the front spoiler to come up as ‘2002 turbo’ in the rear-view mirrors of drivers about to be overtaken. Maybe someone senior was embarrassed by the fact that the E28 was showing so much age and conservatism by 1985? 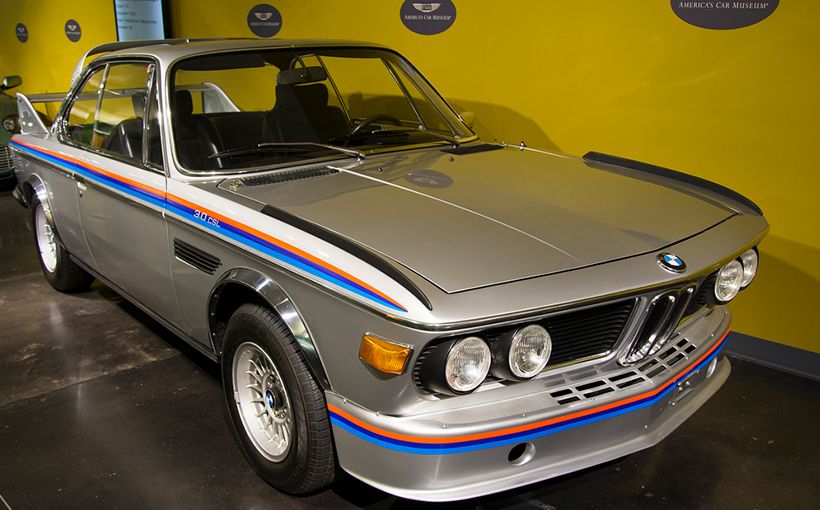 The E28 5-Series superseded the E12 original which had made its debut back in 1972. It looked like a cleaner and less memorable version of that car. It seems that in the 1970s BMW had lost its styling mojo after the triumphant E3 and E9 six-cylinder sedans and coupes. Much the same could be said of the 2000 to 2019 time frame!

BMW had certainly developed a reputation for producing magnificent six-cylinder sedans. The E3 3.0Si sedan of the early 1970s had a standing 400 metre time of 15.6 seconds and a top speed of 132 miles per hour in those pre-metric Australian days. Had it weighed a couple of hundred kilograms less, it could have been a serious Bathurst outright contender! And, how elegant! 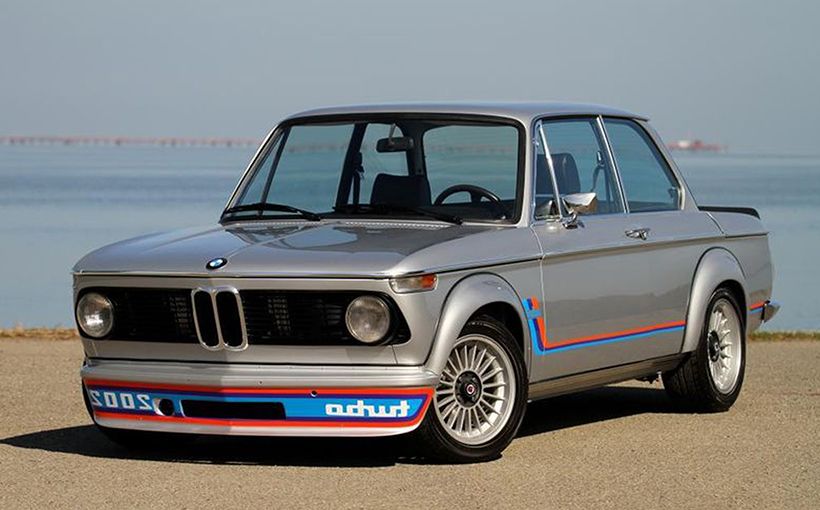 No mistaking the 2002 Turbo in your mirrors.

If anything, then, the E28 M5’s upright and narrow looks made its sheer capability all the more incredible.

Maximum power was 210kW in an era when even 100kW less was considered a healthy output; the Alfa Romeo GTV6 , for example, delivered 117kW. Peak torque was 340Nm, which didn’t arrive until 4500rpm. It has been said that BMW deliberately understated the M5’s acceleration times in order not to eclipse the flagship M635CSi coupe (heavier and using the same engine) . Even so, figures in the mid-six-second range for zero to 100km/h were remarkable; the reality was closer to six flat. Top speed? About 240.

This freakish car was destined to be hand-built in very low numbers and to carry a daunting pricetag. It was never sold in Australia. Fewer than 2500 were produced. Even so, BMW faced a successful law suit in the US. Because more were sold over a longer period than BMW had promised, the company had to give every customer a cheque for $4000 in March 1993. Doesn’t that sound like having your cake and eating it, too?

To put that maximum power figure into further perspective, consider that this was the number claimed for the E36 M3 more than eight years later!  Interestingly, it was also the output of the E39 540i in the late 1990s. Only supercars had upwards of 200kW in the mid-1980s … and precious few of them. The first generation Honda NSX, half a decade later, also made 210kW. 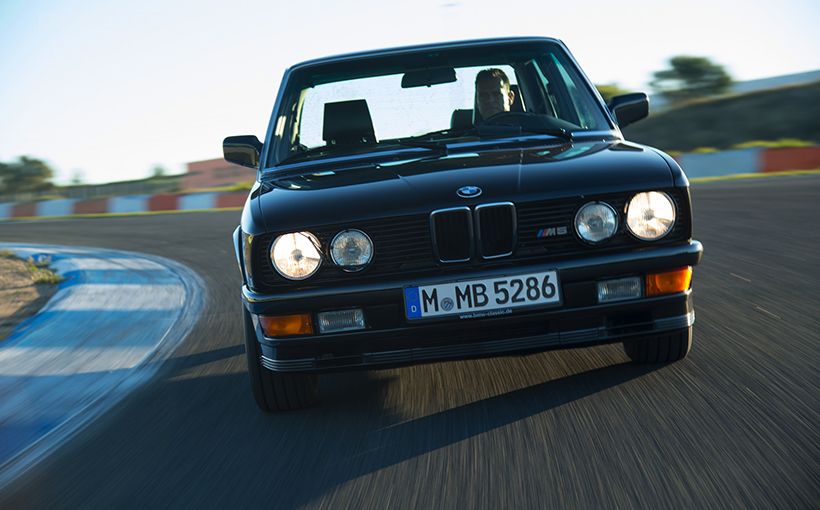 The E28 M5 was, then, a new kind of car; arguably it was to the European market something like what the Ford Falcon GTHO Phase III had been to the Australian scene a decade and half earlier. The M5 stood at a greater performance remove from an entry level E28 5-Series than the Jaguar Mark 2 3.8 manual  stood from a 2.4 automatic. So, why no glorious double-page spread in Automobile Year? (What a pity it now seems that the unique territory BMW carved out for itself in the 1970s and 1980s with its Motorsport Division has now been largely usurped by both Mercedes-Benz and Audi!) 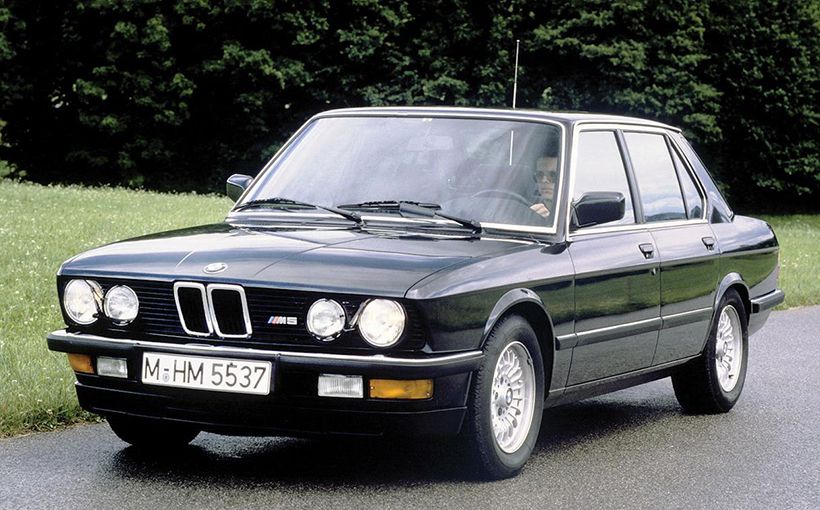 In September 1988, the much sleeker E34 M5 was introduced and this one did go on sale in Australia. In the tough job of being a motoring journalist, I got to drive one for a week. I wrote:

Because of the agreement among West German car manufacturers (except Porsche), the M5 is governed to a top speed of 250km/h. But the eager-eyed BMW engineers suggest it would run comfortably to at least 280km/h were that device bypassed.

Yet outwardly the M5 is not much different from a 525i. There’s no swagger here. Parked beside the VN Commodore Group A, BMW’s muscle machine looks muted and modest, bereft of look-at-me addenda. It puts me in mind of Mr Universe in black tie.

Naturally, the people at Wheels magazine decided to pit the second M5 against the said Commodore Group A. The September 1990 editions puts the two maroon cars on its cover, Commodore in the foreground. Editor, Angus MacKenzie, concluded:

…the M5 is the nearest thing yet to a four-door Ferrari, combining exoticar performance, braking and roadholding with the comfort and practicality of a top quality sedan. No other full four/five seater comes close, at any price. 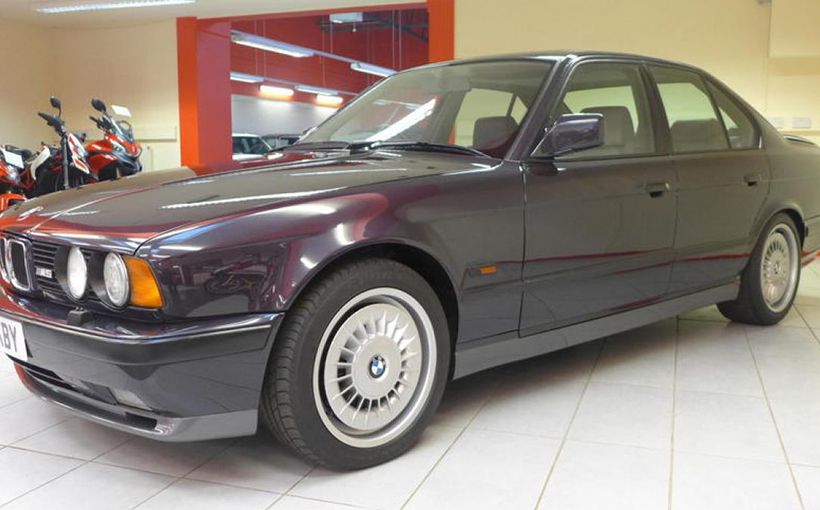 That weight was quite a negative. Ascending Mount Panorama in a Citroën BX 16-Valve in the 1992 James Hardie 12-Hour production car race, I noted how much more quickly the Bond/Seton Saab 9000 Turbo closed on me than the Jones/Longhurst/Crichton M5, though neither approached the astonishing speed of the new RX-7 Twin Turbo. Creditably, the BMW finished second outright despite some mechanical issues, but that race indicated to me that here was the ultimate four-place grand touring car rather than a trackday special. It weighed 1670kg (without the rollcage). 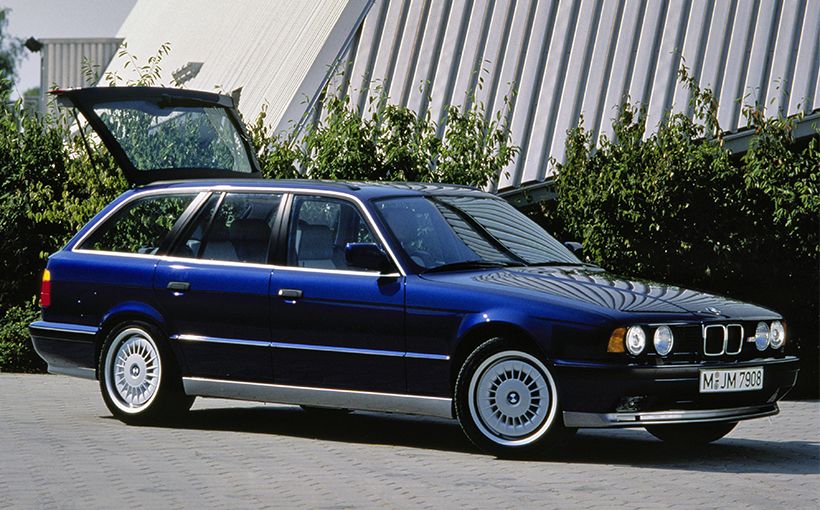 What an astonishing piece of kit, the M5 Touring, built by hand.

While no more extroverted than its predecessor, the second-gen M5 boasted a cleaner aesthetic. Typifying BMW’s thorough approach were those striking 17-inch alloys with their unusual covers. At first glance, they resembled hubcaps but were in fact race style cast magnesium centres with integral turbine blades mounted on (obscured) five-spoke black alloys. These ‘M-System’ centres were said to increase air flow to the brakes by 25 per cent.

(In 1992 they were dropped in favour of ‘M-System 11’ ‘throwing stars’ for even better cooling. In 1994 more conventional 18-inch alloys with no finned cover were fitted.)

For model year 1992, the engine was enlarged to 3.8 litres. Power climbed to 250kW and acceleration to 100 was half a second quicker.

In 1994 a six-speed gearbox replaced the five-speeder. 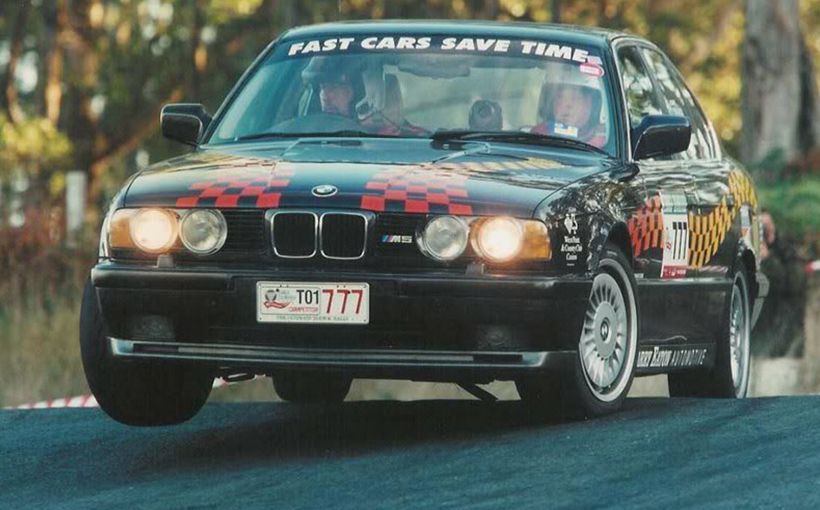 A total of 12,224 E34 M5 sedans were produced, all of them built by hand. The last ever production M car to be made in this diligent and time-consuming fashion must number among the all-time great Q-cars, namely the M5 Touring (wagon). Eight hundred and ninety-one were produced. Can you imagine the astonishment one of these would have caused typical non-enthusiast drivers of S-Class Mercedes, as it cruised past at 250km/h?

In summary, the first two M5s faced no direct rival, but in subsequent decades, BMW’s arch-rivals have thrown up serious alternatives. Arguably, at the time of writing, the Mercedes-AMG models carry greater charisma than the M-cars. It seems to me that BMW’s ongoing dilemmas with design have played a decisive role here and we can see a clear example of this in the almost ludicrously understated original M5, surely one of the greatest – if not the greatest – performance cars of the 1980s. 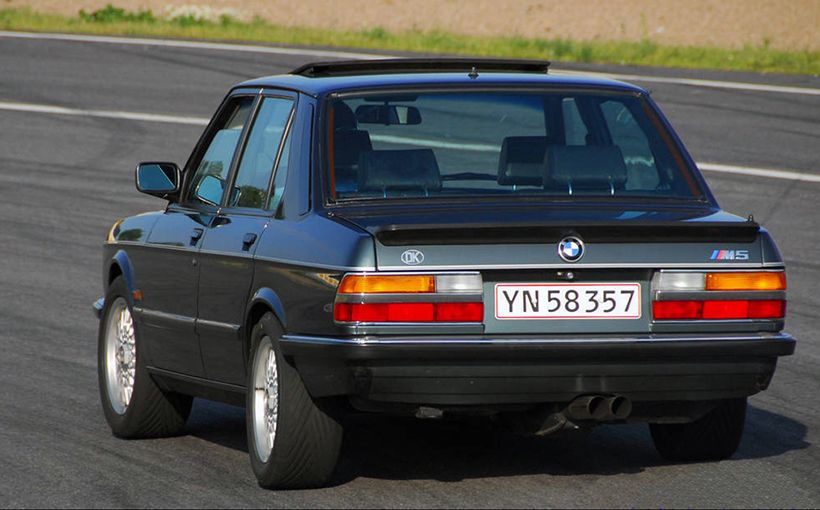