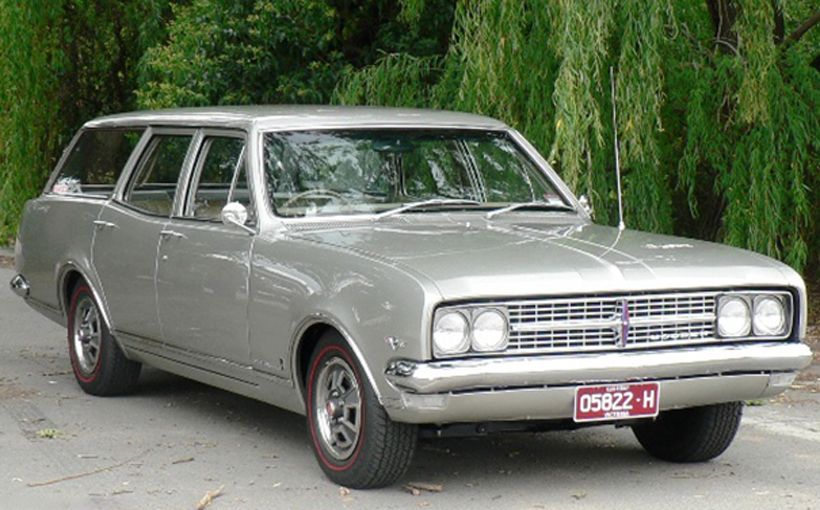 The HK Premier wagon, after the Monaro, was the most impressive HK model as it was the first local model to offer four headlights and exclusive front styling at this level. The wagon was also completed after the HK’s second wheelbase stretch with a deeper rear section that was a much better match for the stretched front guards. Under Holden’s new options game, a Premier wagon very similar to this was depicted in the HK brochure. (Photo from gopixpic.com)

The January 1968 launch of the “New Generation Holden” HK series marked so many firsts. It was the first Holden re-defined by a rival in mid-development. It was the first to offer a V8 option, the first to offer a first gear synchromesh option on the base manual and the HK Premier was the first four headlight Holden. The striking Monaro which followed in July 1968 was the first Holden coupe and the first Holden to win Bathurst. Yet Holden was not ready to give up on its old ways completely.
None of these exciting new HK advances were standard on the most popular mid-range model despite its flash new Kingswood badge. If new Australian Design Rules hadn’t dictated the HK’s comprehensive safety package across the range, several of its new safety features may well have been an option as well. For evidence of that mindset, Holden postponed its first standard heater-demister in anything other than a Premier until the 1969 HT facelift as dictated by ADRs. To be fair, all HK models came with front lap-sash belts and GM’s new Saginaw fully collapsible steering column at a time when the XT Falcon had lap belts only and a crash pad on the steering wheel.