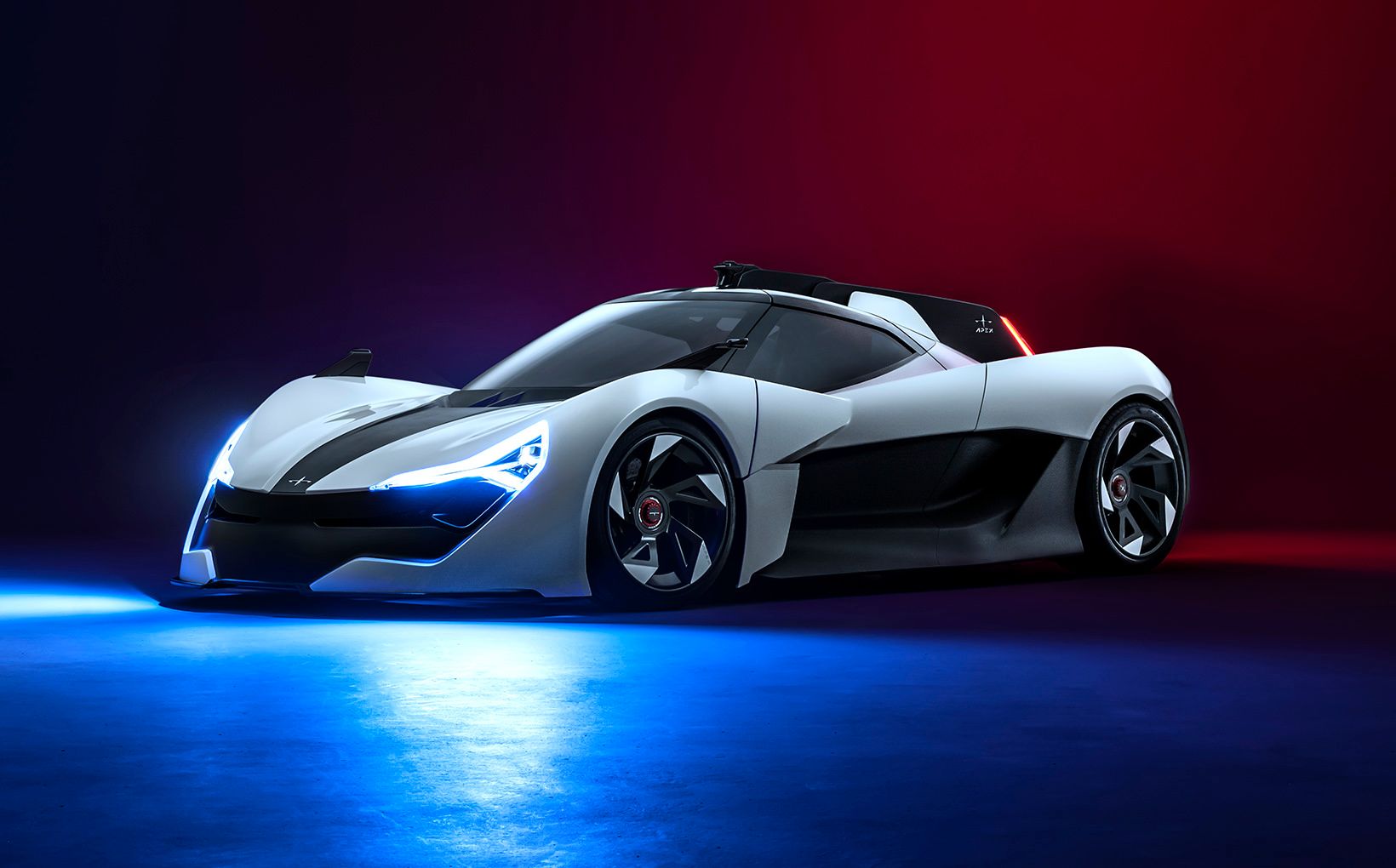 It would seem as though the electric car revolution has inspired innovation in the automotive industry, with a number of previously unknown car-makers coming to the fore with exciting zero-emission models.

In the last few months alone, we have seen the reveal of multiple exciting, new EVs, such as the Lucid Air and Fisker Ocean, as well as ballistic hybrids such as the Czinger 21C.

Even the mainstream manufacturers are starting to see the potential of an EV powertrain in a performance car, with the Porsche Taycan and Lotus Evija on the way, and even reports of AMG working on its first EV based off the EQS sedan.

The one common denominator with the aforementioned start-ups is that they are all based in the US, or more specifically California, which is emerging as an epicentre for electric vehicle innovation.

However across the pond, other newcomers have begun taking notice, such as Apex Motors – a car-maker that aims to make a splash in the EV sportscar market, with a new model previewed by its AP-0 concept car.

Initially scheduled for a reveal at the Geneva motor show before its cancellation, the AP-0 is designed with a light kerb weight and considerable power output in mind – two ingredients that certainly put you on the right path to creating a great sportscar. 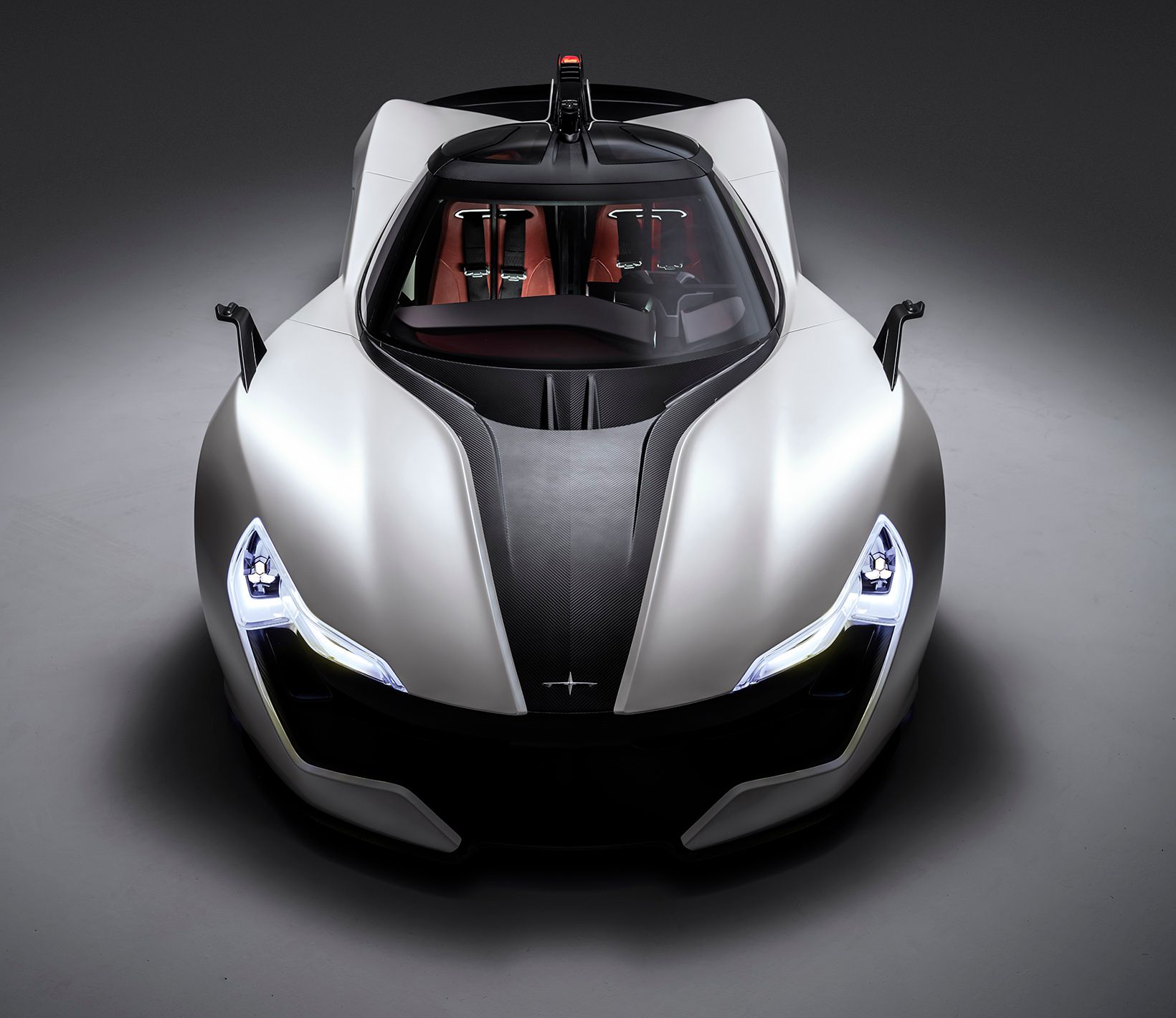 The AP-0 is motivated by an all-electric powertrain good for 484kW/580Nm.

Despite the fitment of heavy lithium-ion batteries, Apex has managed to keep the AP-0 Concept fit and trim by using liberal amounts of carbon-fibre in its construction, resulting a kerb weight of just 1200kg.

Fitted under the vehicle floor is a set of 90kWh batteries, which allow for a considerable output of 484kW/580Nm, impressive figures on their own, but are made even more special with its power-to-weight ratio, a massive 403kW per tonne.

All that power is delivered exclusively to the rear wheels, with the AP-0 able to mow down the sprint from zero to 100km/h in just 2.3 seconds on the way to a top speed of 306km/h – enough to put the most savage performance models available today on notice. 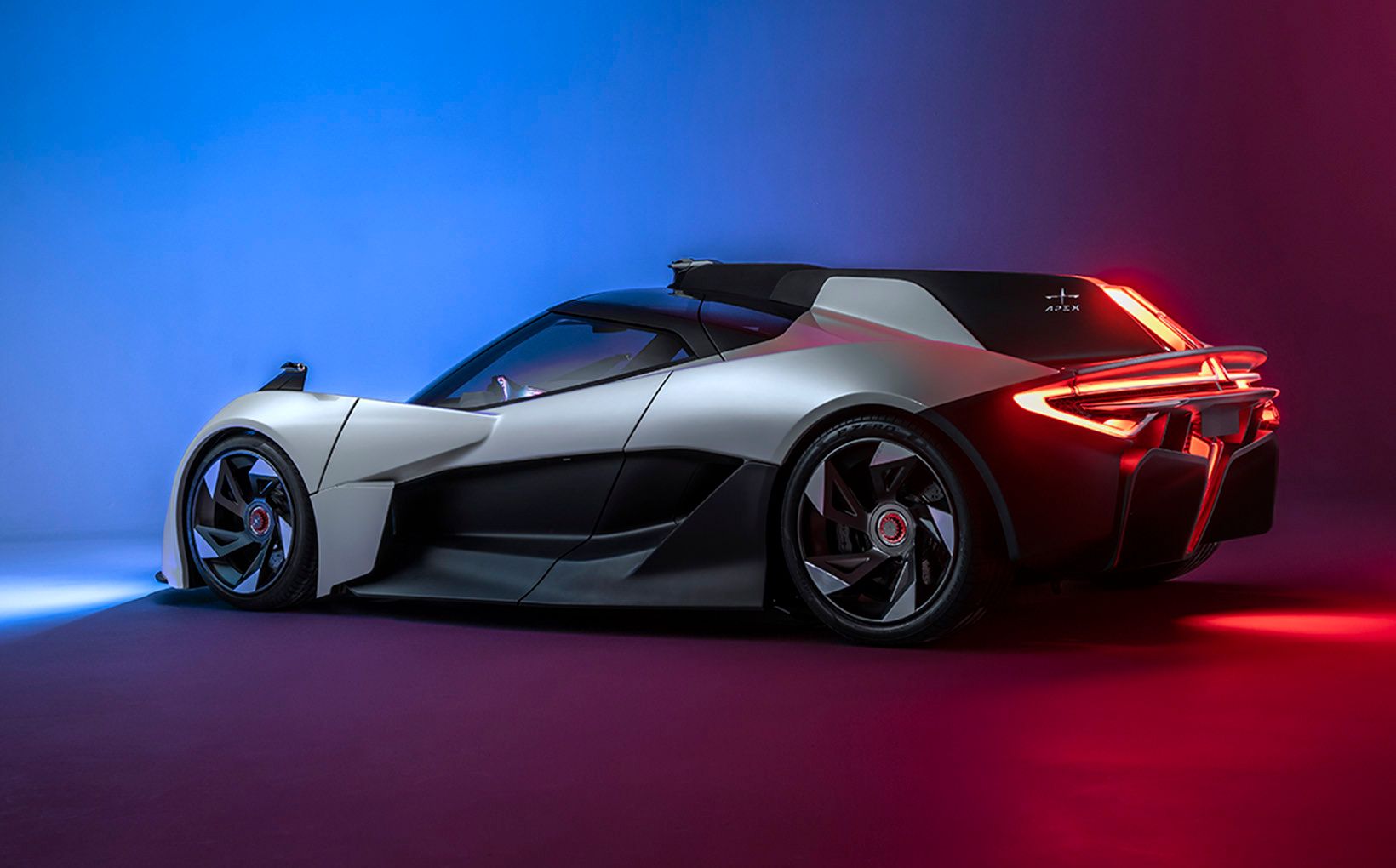 Its lightweight carbon-fibre construction allows for a fearsome power-to-weight ratio of 403kW per tonne.

Apex claims the range of the AP-0 concept extends to an impressive 515km, with the battery able to be charged from empty to 80 per cent in under 15 minutes using Combined Charging System, Type 2 and GB/T charging compatibility. A full charge on a type 2 connector is estimated to take eight hours.

Both the body tub and door panels are crafted from carbon-fibre, while the AP-0’s handling prowess is enhanced by F1-style push-rod suspension with adjustable coilover shock springs and dampers.

Visually, there is no mistaking the AP-0 Concept’s styling, which will be easily identifiable once production starts in the fourth quarter of 2022, with a number of design features that help it stand out from the crowd. 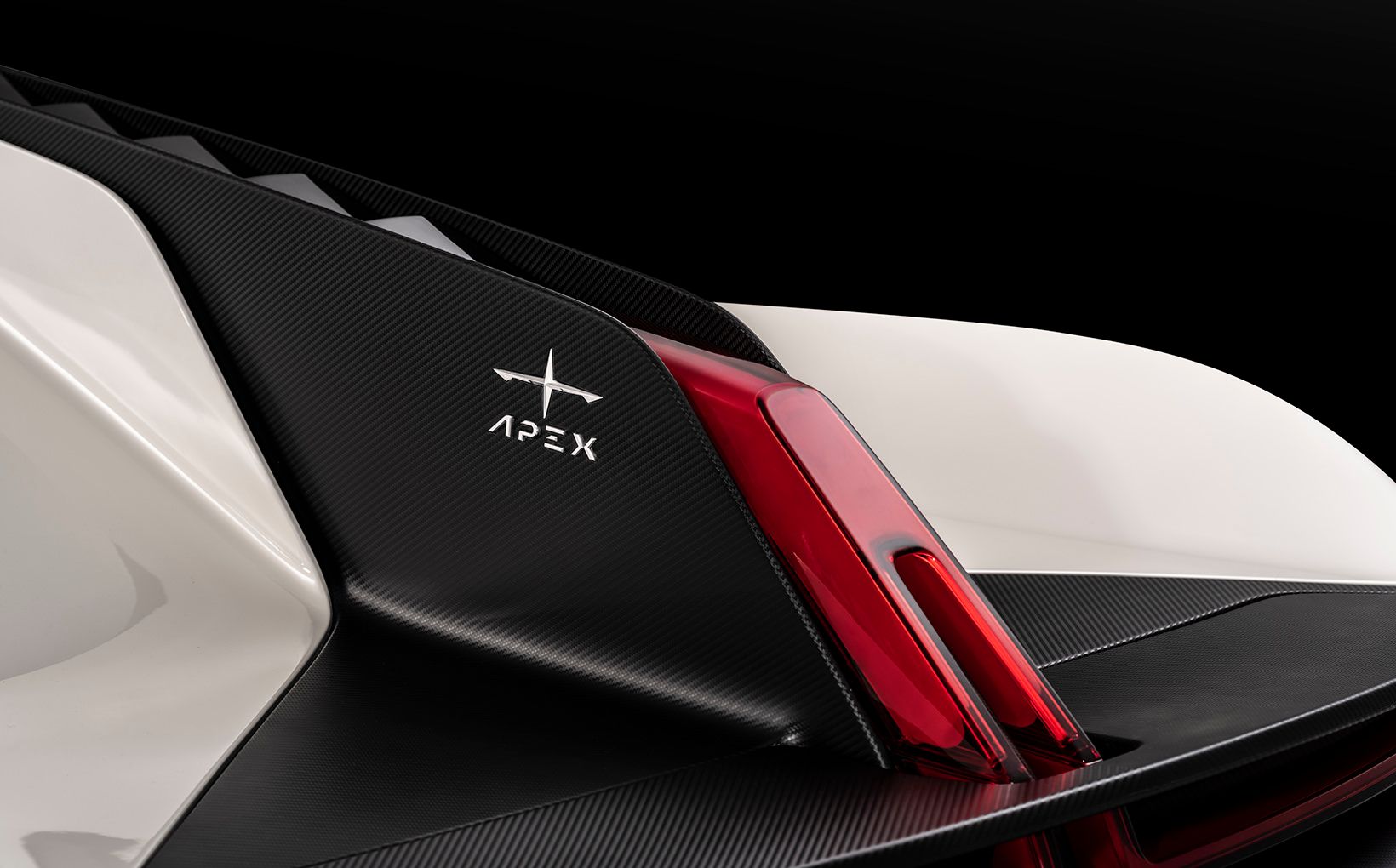 The massive sharkfin running along the spine of the car is undoubtedly the AP-0’s signature design feature.

The AP-0’s signature design element is undoubtedly the mid-mounted sharkfin that runs down the spine of the car, all the way from the roof into the integrated rear lip spoiler.

Made of exposed carbon-fibre, the spoiler melds with the car’s stylish LED tail-light cluster, with a lighting motif that reflects Apex’s cross-like emblem.

The sharkfin also dominates the AP-0’s side profile, however underneath is a silhouette similar to other compact, mid-engined supercars, along with aggressively sculpted wheelarches and flanks, giving it a muscular look. 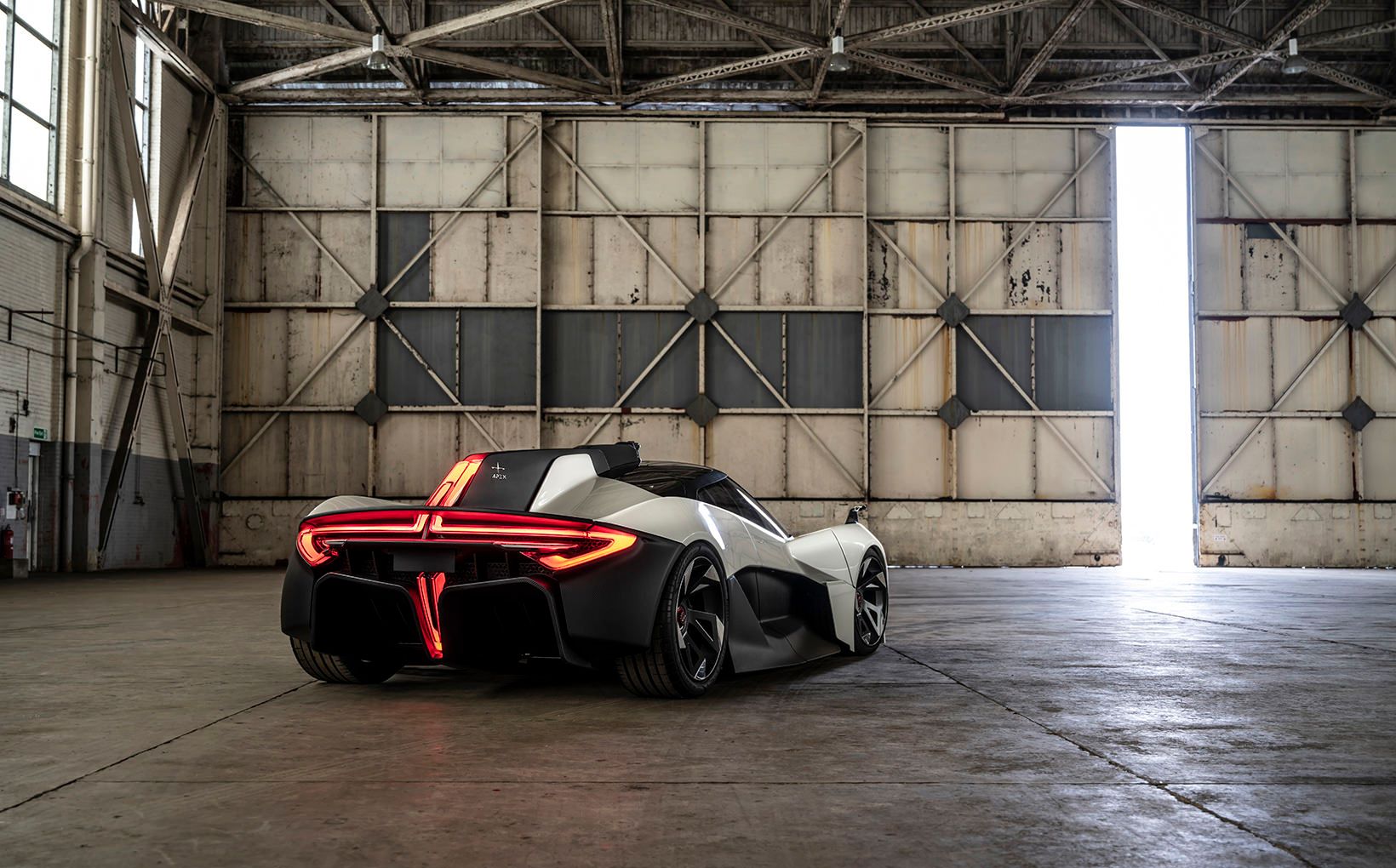 At the front, a raking bonnet flows into the blacked-out grille and aggressive front splitter, while lighting duties are taken care of by an LED strip shaped in an almost triangular style.

Cameras have taken place of the exterior mirrors, while ingress and egress is facilitated by stylish butterfly doors.

Sitting only 95mm off the ground, the AP-0 rides on mixed five-spoke carbon-fibre alloy wheels, measuring 19 inches at the front and 20 inches at the rear. 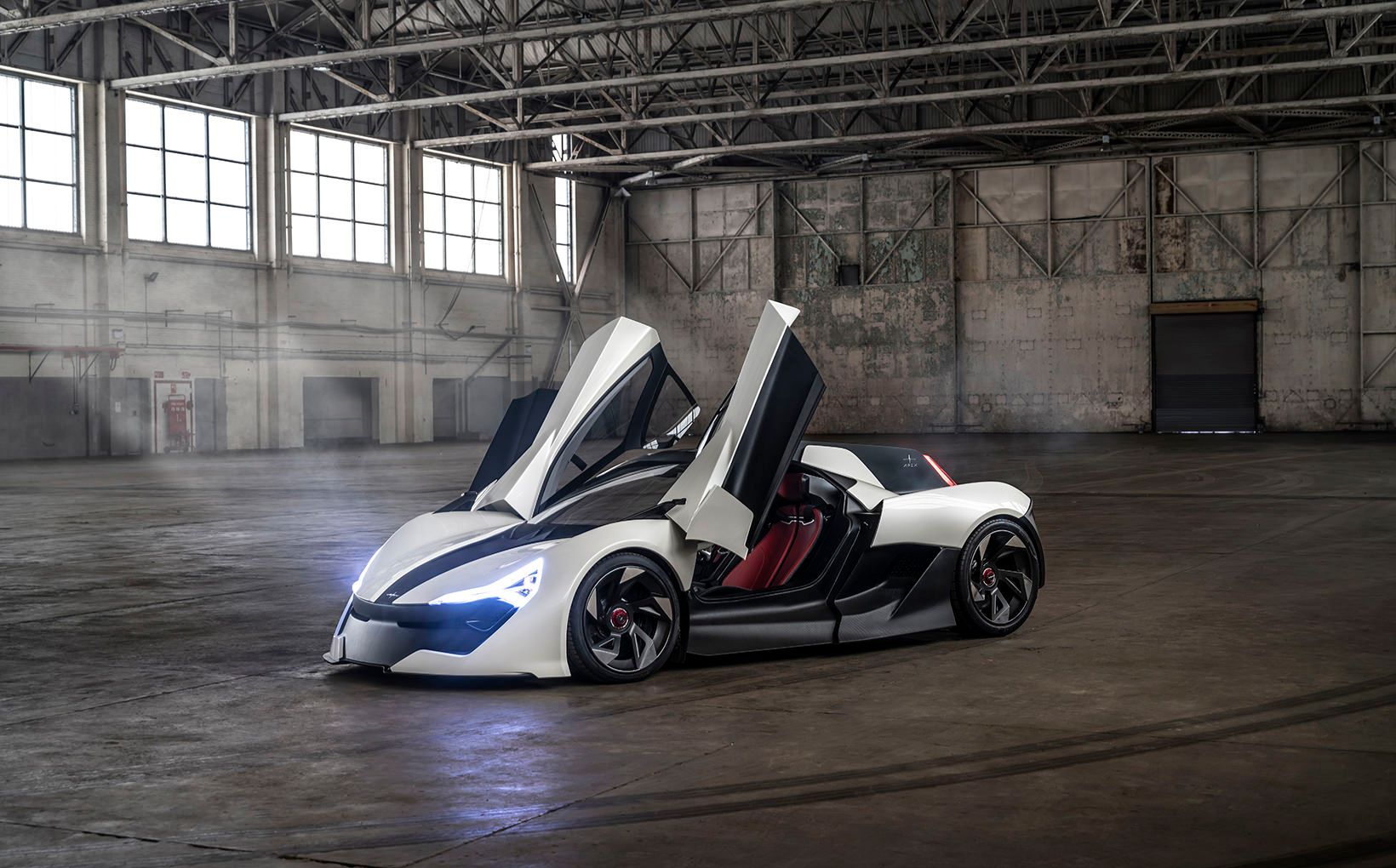 Butterfly doors give the Apex AP-0 extra design flair – as if it needed it.

Entering the cabin, the AP-0’s bucket seats are crafted entirely from carbon-fibre, while an F1-inspired square steering wheel pairs with a fully digital instrument cluster spread over three separate screens.

Also reminiscent of a race car, the rest of the AP-0’s interior is sparsely specced with essentially no other buttons or storage, with naked carbon-fibre serving as the only interior trim.

Along with its aerodynamic functionality and head-turning style, Apex claims the sharkfin design houses the car’s primary safety equipment – a range of hi-tech LiDAR sensors. 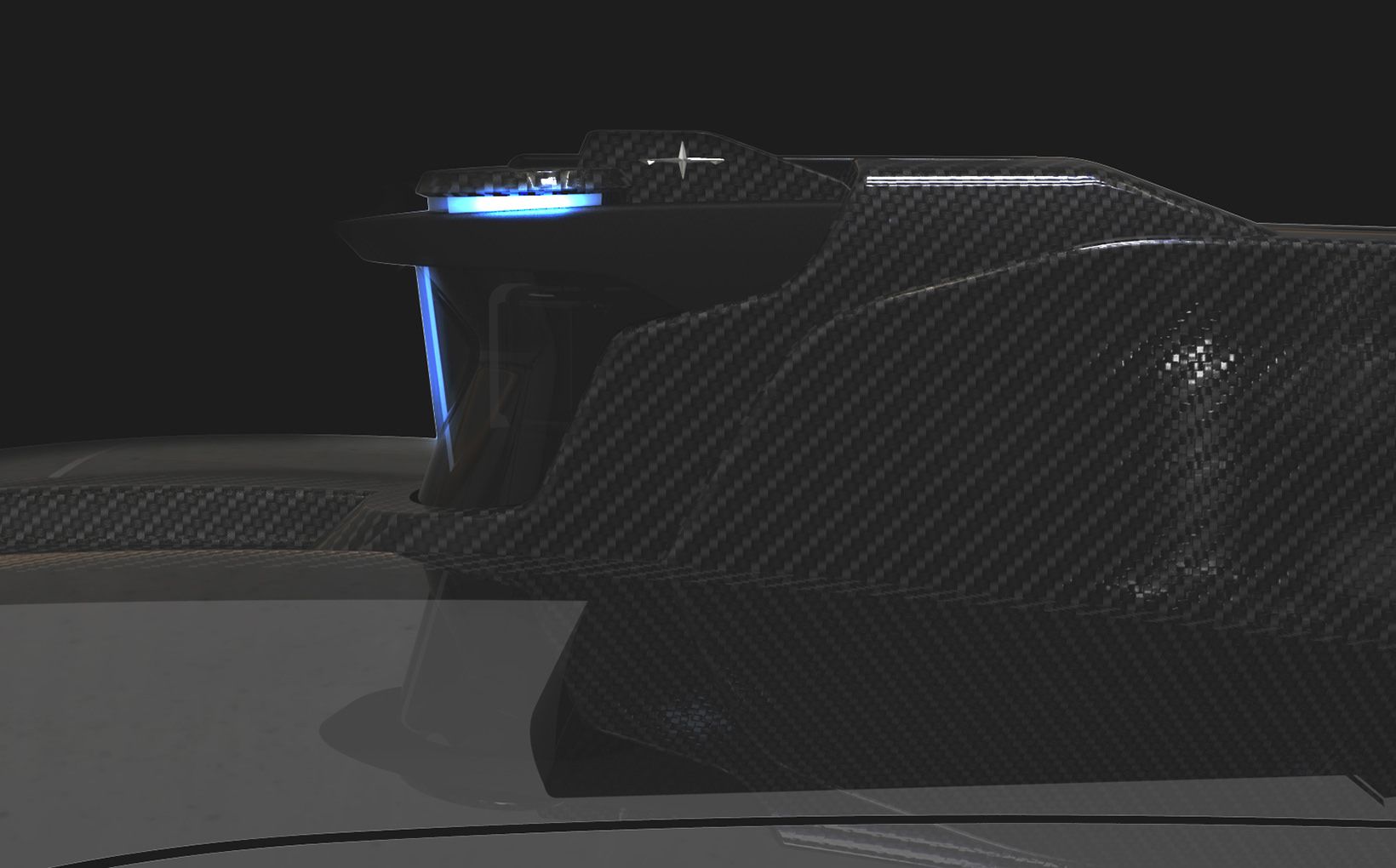 By using the sensors, the car’s driver assistance systems are able to generate detailed maps of the AP-0’s surroundings including vehicles up to 100m away, all accurate to within a few centimetres in any weather.

It is still unknown whether the AP-0 will come Down Under – being produced in right-hand drive will help its case – however if it does, the pricetag will likely be north of $300,000, given British customers will have to fork out £150,000 plus on-roads.

In any case, the AP-0 marks an exciting shift in the sportscar market, with previously unknown players keeping the mainstream brands on their toes with the exciting evolution of performance EVs.