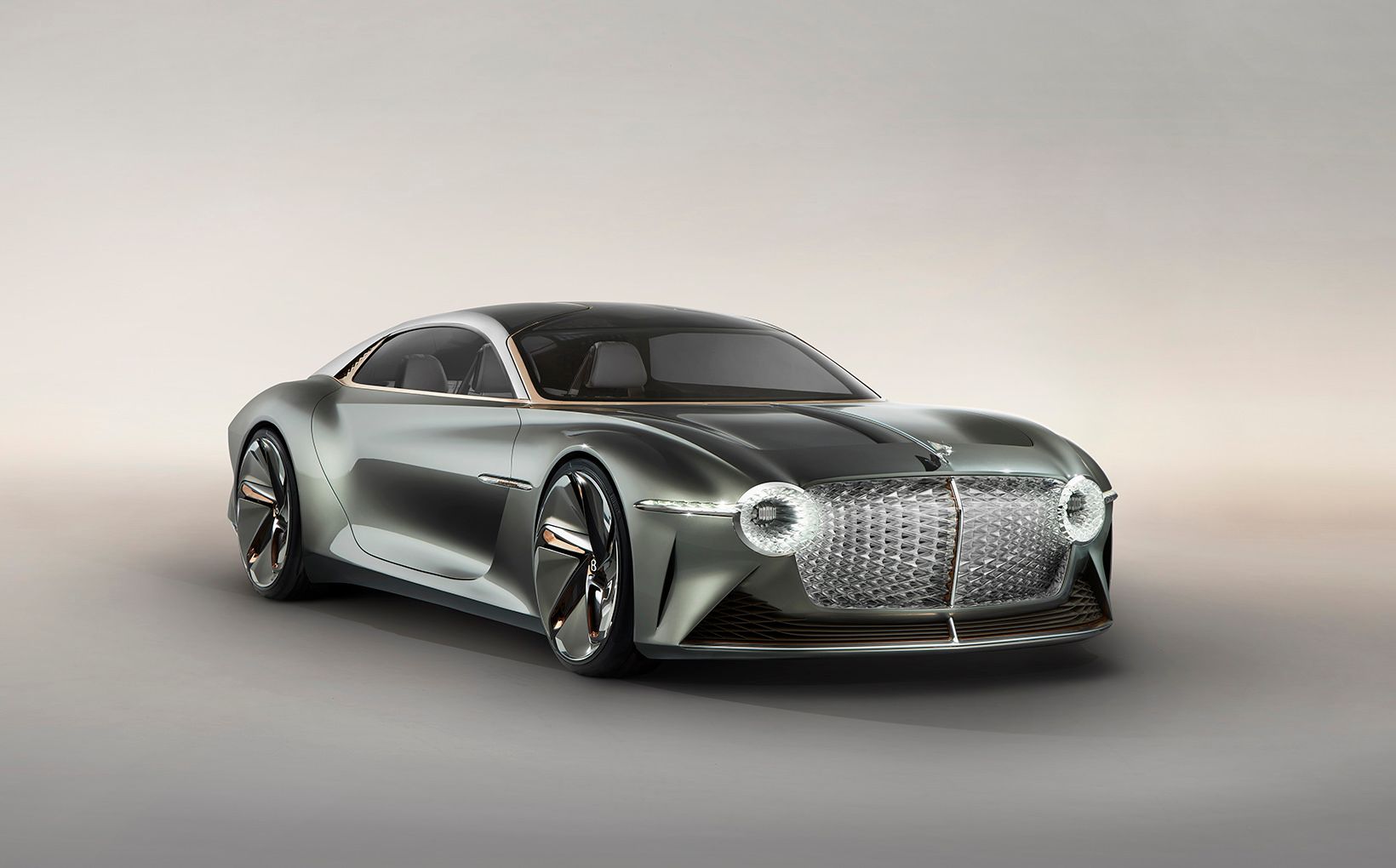 WHILE it might be customary to receive a letter from the Queen of England on your 100th birthday, Bentley is an automotive brand, not a person, so it had to celebrate the occasion a little differently.

What better way to celebrate the past than to take a look into the future? Well, that’s the way that Bentley approached it when it concocted the EXP 100 GT – a grand-tourer concept that is equal parts breathtaking and futuristic.

Described by the British luxury marque as “a physical embodiment of the future Bentley brand”, the EXP 100 GT is a case study of what its flagship grand tourer might look like in 2035.

Measuring 5.8m long and 2.4m wide, the EXP 100 GT cuts an imposing figure, especially when you consider that its 2.0m-long doors pivot outwards and inwards (to almost three metres) to ease ingress and egress.

Nonetheless, the EXP 100 GT is instantly recognisable as a Bentley grand tourer thanks to its signature round headlights, long body (made of aluminium and carbon-fibre) and rear haunches, even if its Compass exterior paintwork is unusually made of recycled rice husks.

This green theme also extends to the EXP 100 GT’s powertrain that – in a sign of the times – is all electric. While Bentley hasn’t released all of its details yet, we do know it comes armed with four motors that together provide a colossal 1500Nm of torque. 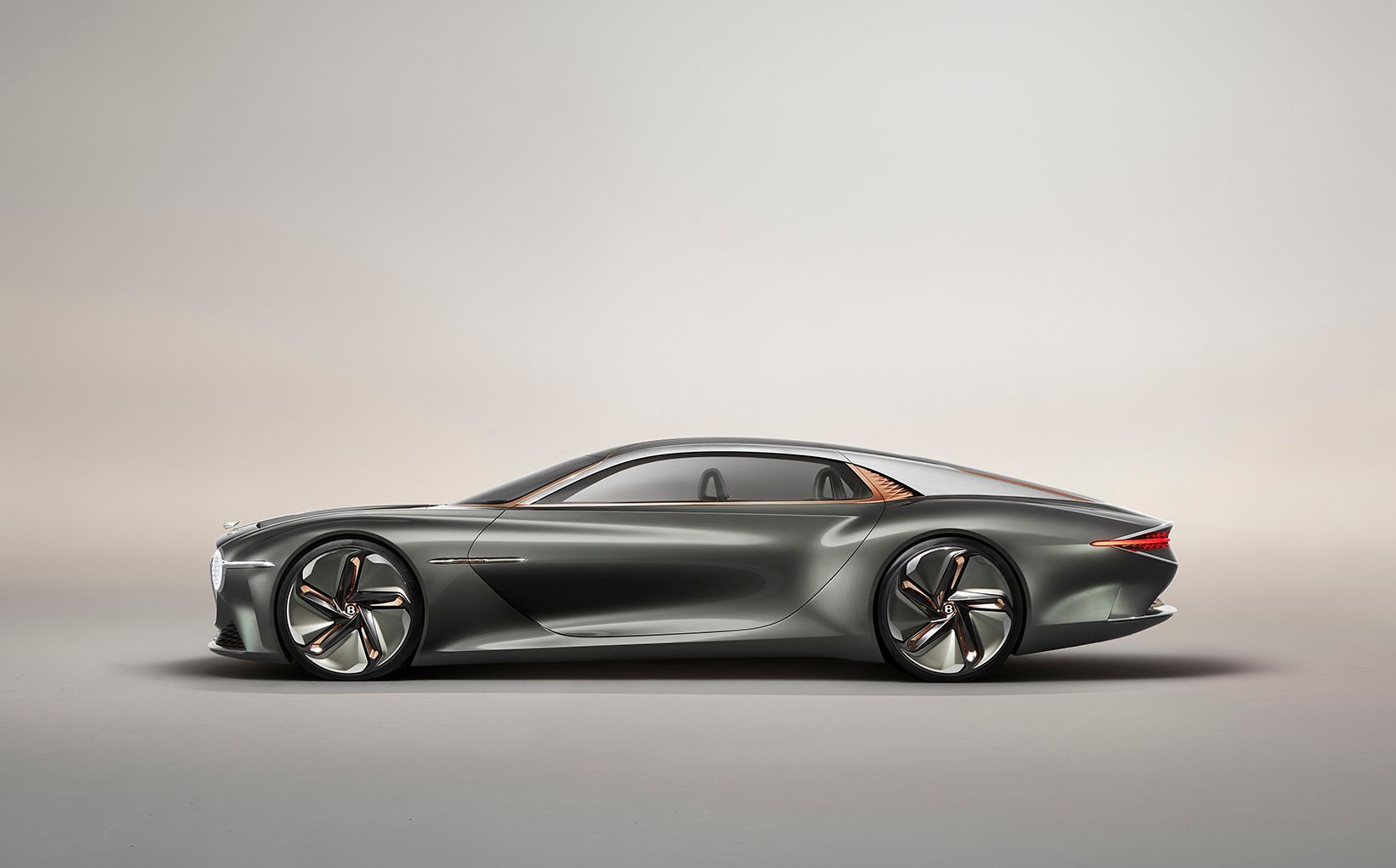 The EXP 100 GT is 5.8m long and 2.4m wide, and has 2.0m-long doors that pivot outwards and inwards to optimise cabin access.

Dubbed ‘Next Generation Traction Drive’, the all-electric powertrain uses torque vectoring to distribute its combined outputs to all four wheels, enabling a blistering zero-to-100km/h sprint time of less than 2.5 seconds and a mind-warping top speed of 300km/h.

And thanks to the presumed advancement in battery technology come 2035, the EXP 100 GT’s power supply will have five times the energy density currently available.

This means the EXP 100 GT’s battery can provide up to 700km of driving range and be charged from flat to 80 per cent in 15 minutes, with both claims ahead of today’s standards. 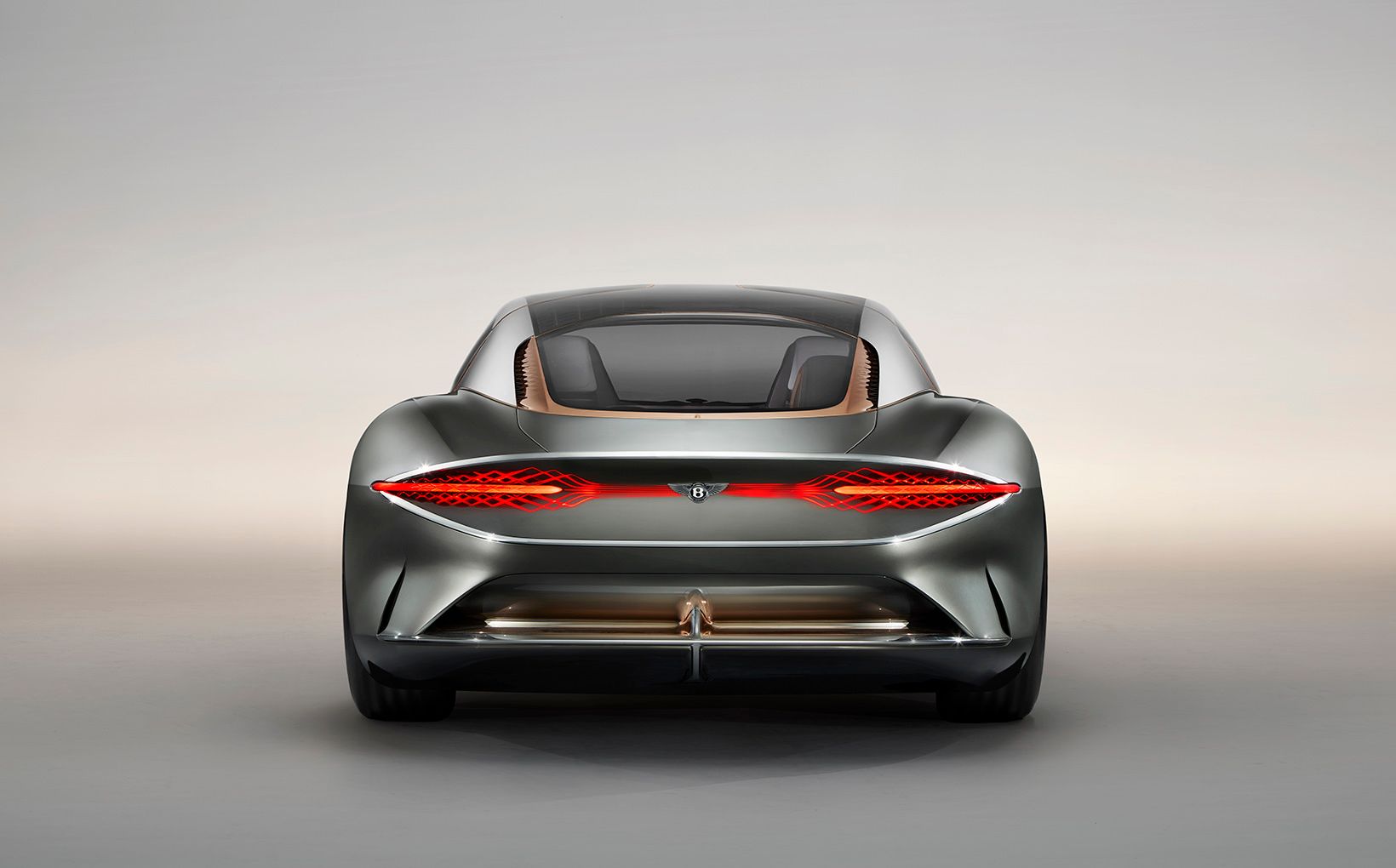 Four electric motors putting out a combined 1500Nm of torque ensure that the EXP 100 GT has zero tailpipe emissions.

While this is all very well and exciting, none of the above can truly be considered ground-breaking, which is why the EXP 100 GT’s real party tricks are the ones you can’t see.

No surprises here, but the EXP 100 GT supports autonomous driving, however it elevates that experience with Bentley Personal Assistant – a fully integrated artificial intelligence (AI) system that the marque says is “emotionally intelligent”.

While this might sound silly, Bentley is dead serious when it says that the technology – which is controlled via touchscreen in both rows of the EXP 100 GT’s four-seat cabin – can monitor external conditions as well as each individual passenger’s mood and behaviour. 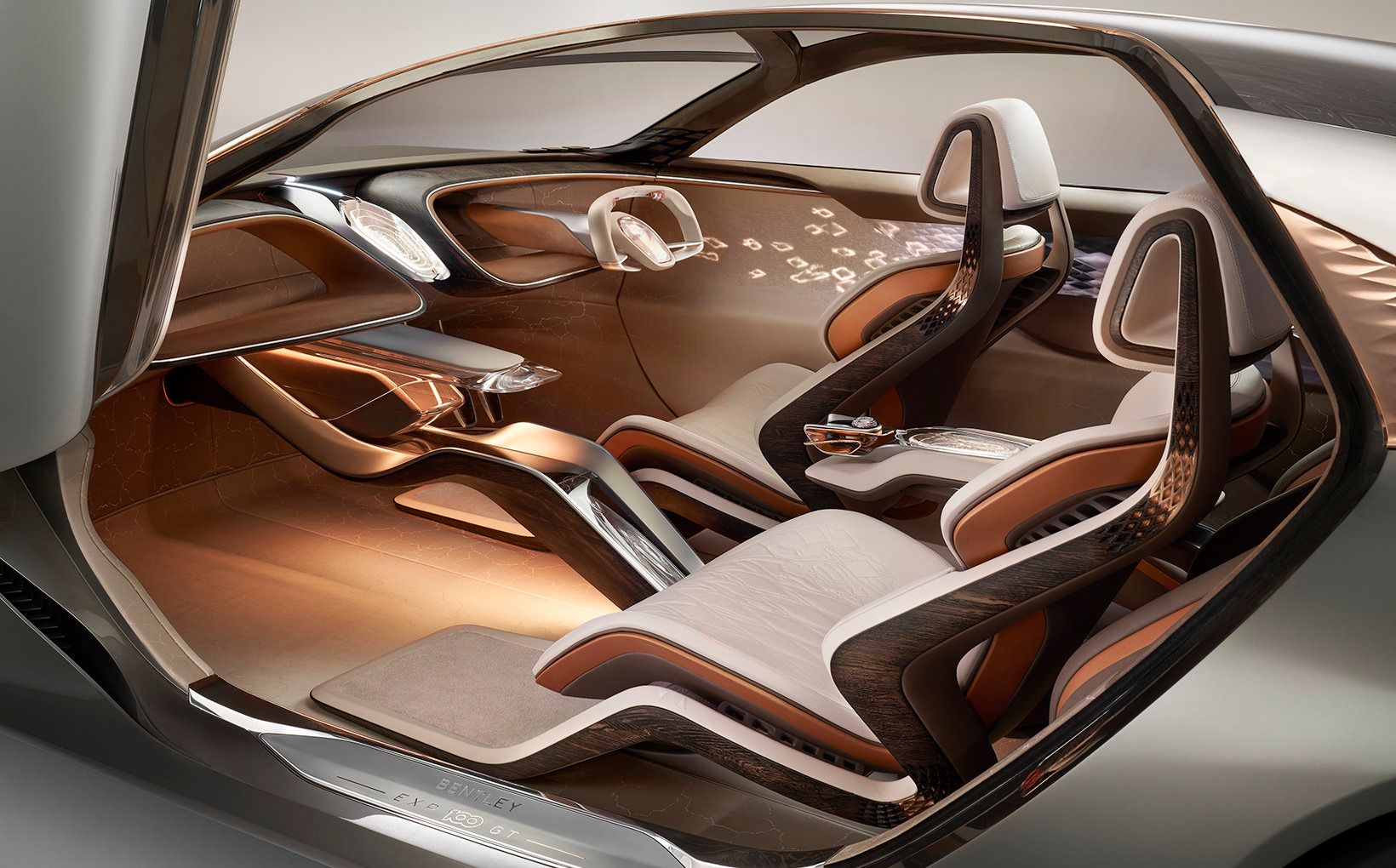 The EXP 100 GT has a configurable cabin with four biometric seats that respond to changes inside and outside of the vehicle.

Bentley Personal Assistant then uses this information to tailor the driving experience with features that respond to their wellbeing and therefore increase comfort.

For example, the configurable cabin has adaptive biometric seating that reacts to changes in temperature, passenger position and environmental conditions by automatically adjusting the level of seat support as well as other adjustments, all of which are made on the move.

Using hand gestures, passengers can select even individual modes, including Enhance (drawing in light, sound and smells from outside as if this was a cabriolet) and Cocoon (creating a private cabin experience with opaque glass and heightened air purification). 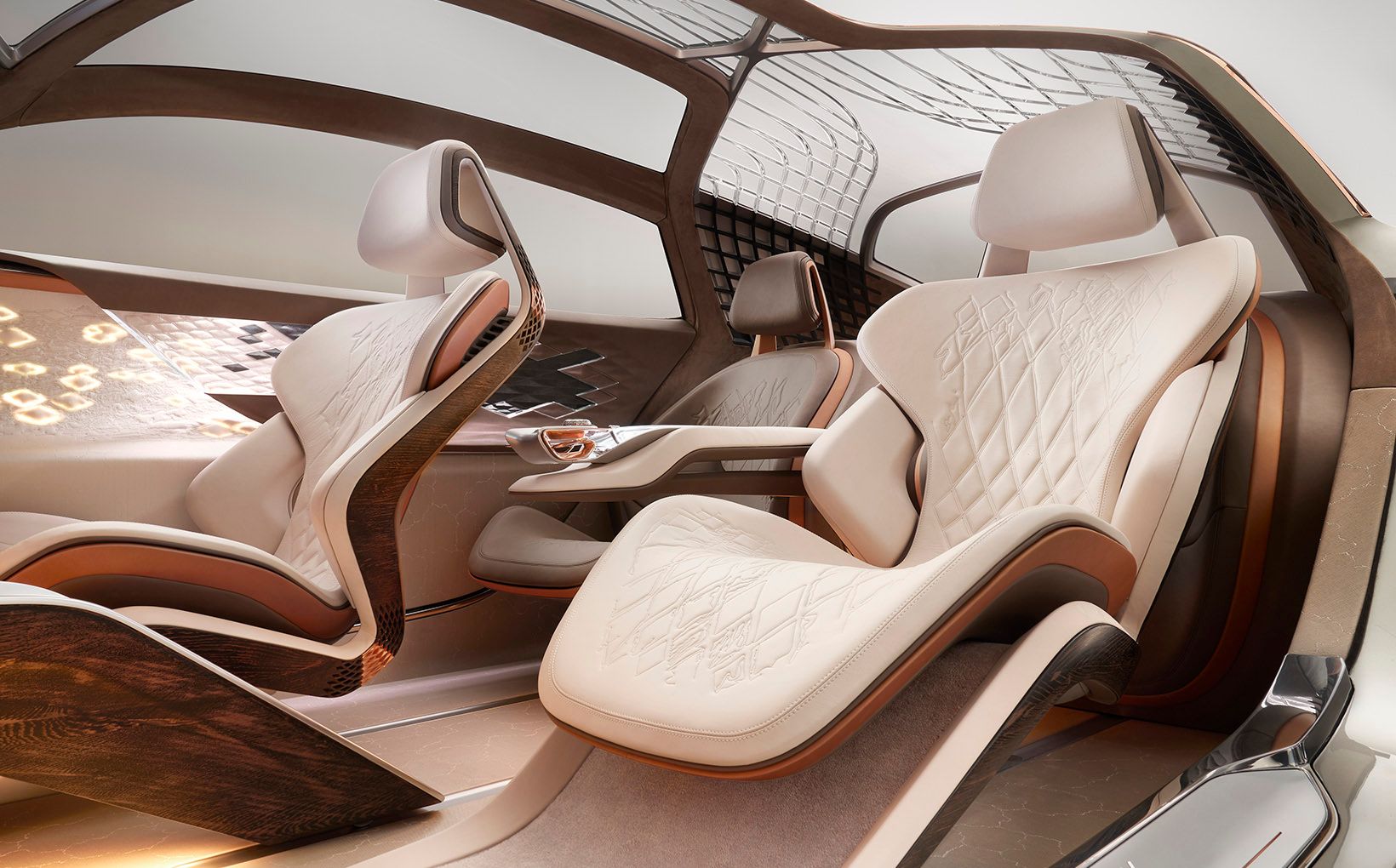 Bentley Personal Assistant uses artificial intelligence (AI) to respond to the needs of the EXP 100 GT’s passengers while on the go.

Not to your taste? Why not give Capture (recording experiences from inside and outside the car) and Re-Live (replaying highlights of the drive) a go instead?

The AI system can even act as a tour guide. For example, it will monitor children who are staring out at the clouds and then automatically provide them with content inside the EXP 100 GT that explains what they are seeing.

The cabin itself is predictably a lesson in opulence, with Bentley saying “sustainable innovation” is realised via 5000-year-old copper-infused river wood, organic leather-like textile from wine-making, British-farmed wool carpets and embroidered cotton surfaces. 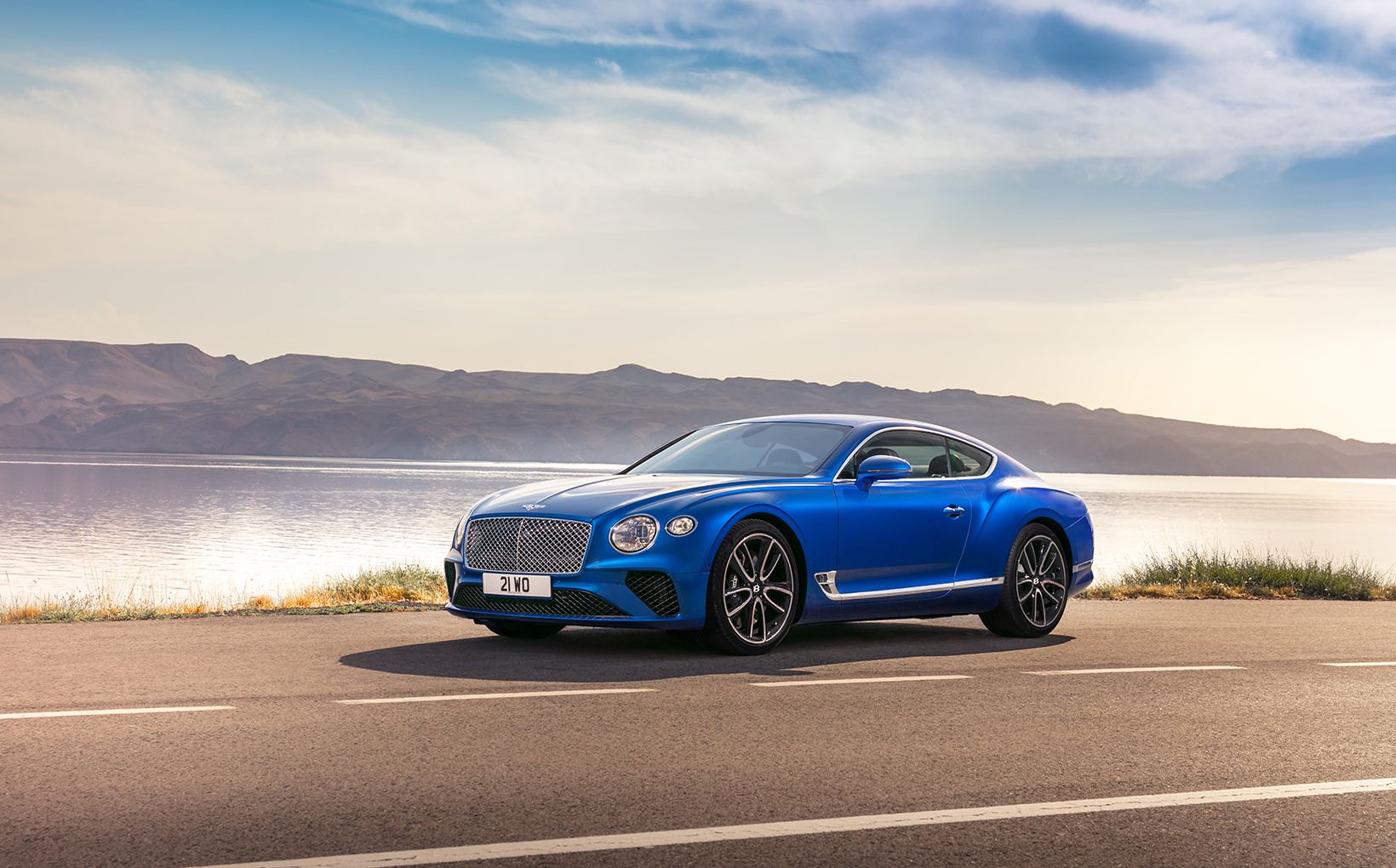 Compared to the EXP 100 GT, Bentley’s current flagship grand tourer, the Continental GT, feels much older than it actually is.

Considering the third-generation Continental GT is only about to celebrate its second birthday, the EXP 100 GT makes it feel, well, about 18 years old.

Bentley’s current grand tourer hammers home its ‘dinosaur’ status with its mighty 6.0-litre twin-turbocharged W12 petrol engine that churns out 467kW of power and 900Nm of torque. We suspect it might be retired by the time 2035 rolls around.

So, what’s your flavour? A contemporary Continental GT that runs on fossil fuel and requires a driver 24/7, or a futuristic EXP 100 GT with zero tailpipe emissions and the option of self-driving? We know which one we’d choose.

Protect your Bentley. Call Shannons Insurance on 13 46 46 to get a quote today.