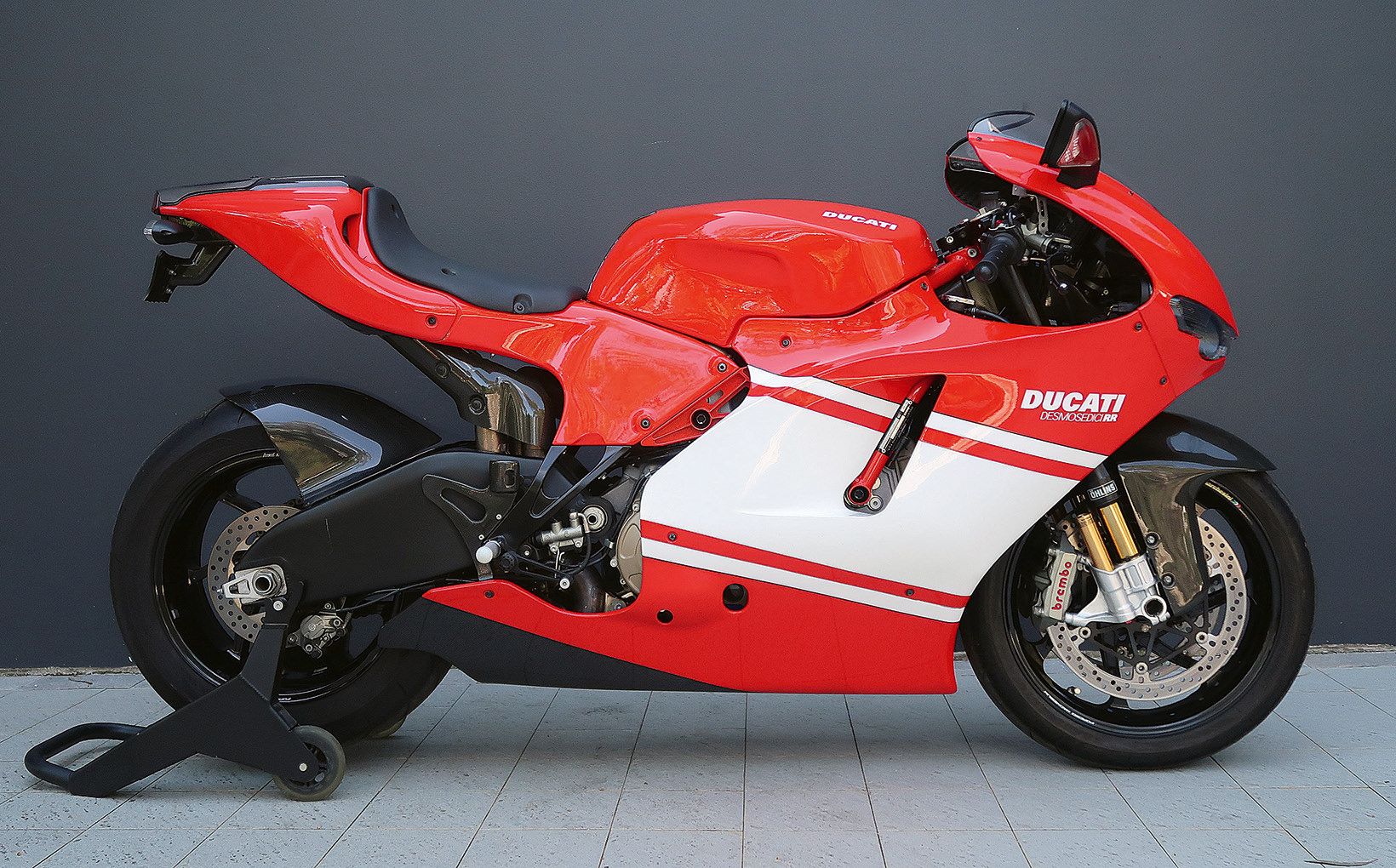 Eight very collectable Ducati motorcycles spanning 37 years have joined Shannons Spring Timed Online Auction from November 11-18. This brings to 37 the number of classic and collectible motorcycles and scooters out of the total of 176 lots on offer. 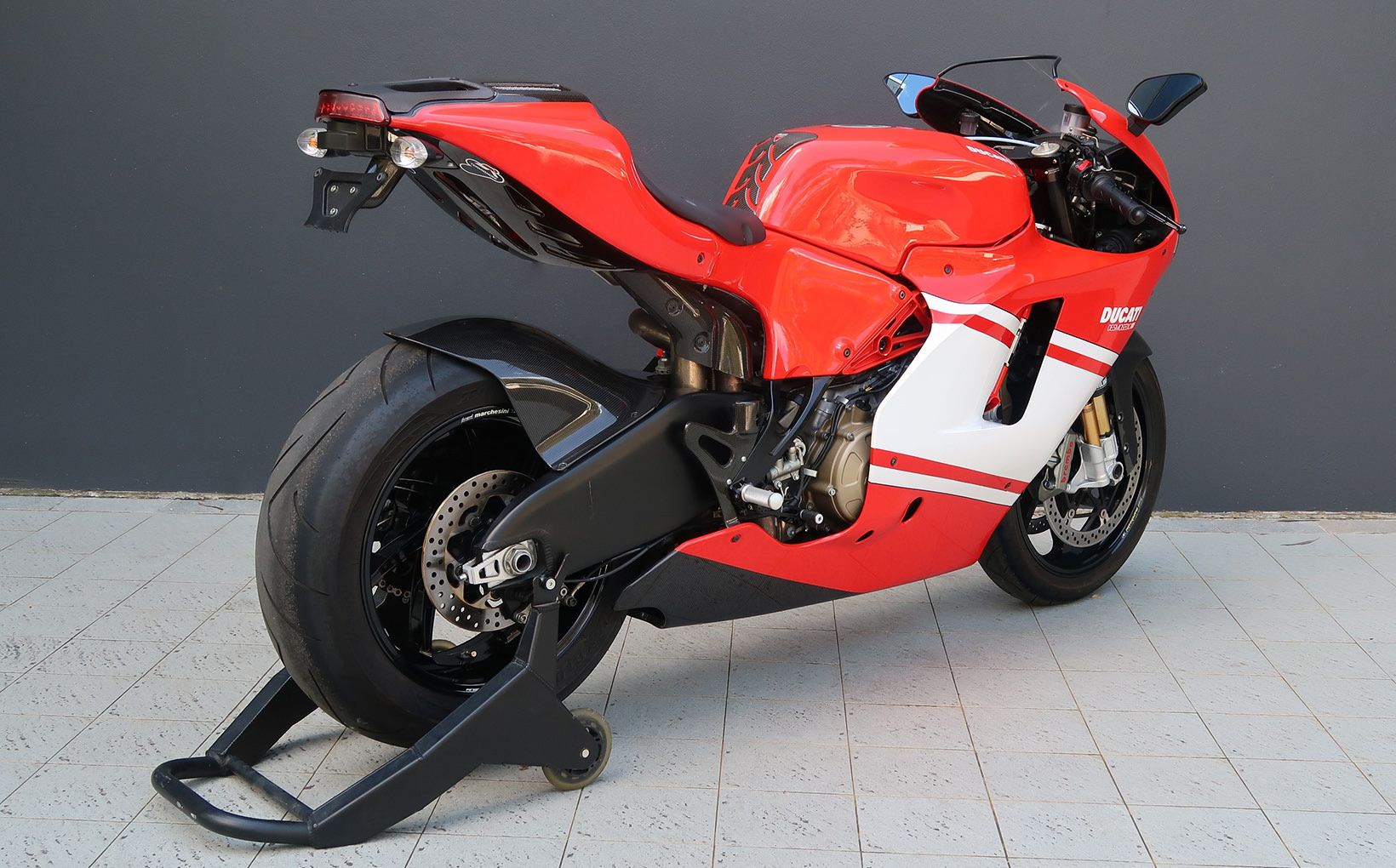 The standout of the ‘Dukes’ on offer is a 2008 Ducati Desmosedici RR limited edition road-going replica of its then current MotoGP machine.

The RR with its 200HP liquid-cooled, D16 989cc V-four engine, with its 13,800 rpm redline and 300km/h plus top speed and six speed gearbox, offered true Grand Prix bike performance, The pristine example being auctioned is No 0606 of the 1500 units built and all were spoken for by the time production began, with the first reportedly going to Hollywood superstar Tom Cruise.

Just 120 were allocated to Australian customers and despite a sticker price in excess of $100,000 all were snapped up, helped no doubt by Casey Stoner’s first championship win for the legendary Italian team.

Now a modern classic, the Desmosedici RR is the ultimate MotoGP race replica that is still regarded with awe by enthusiasts more than a decade after its launch and is one of Ducati’s most collectible bikes. Offered in stunning condition, it is supplied with its books and history and is expected to attract interest in the $65,000-$75,000 range. 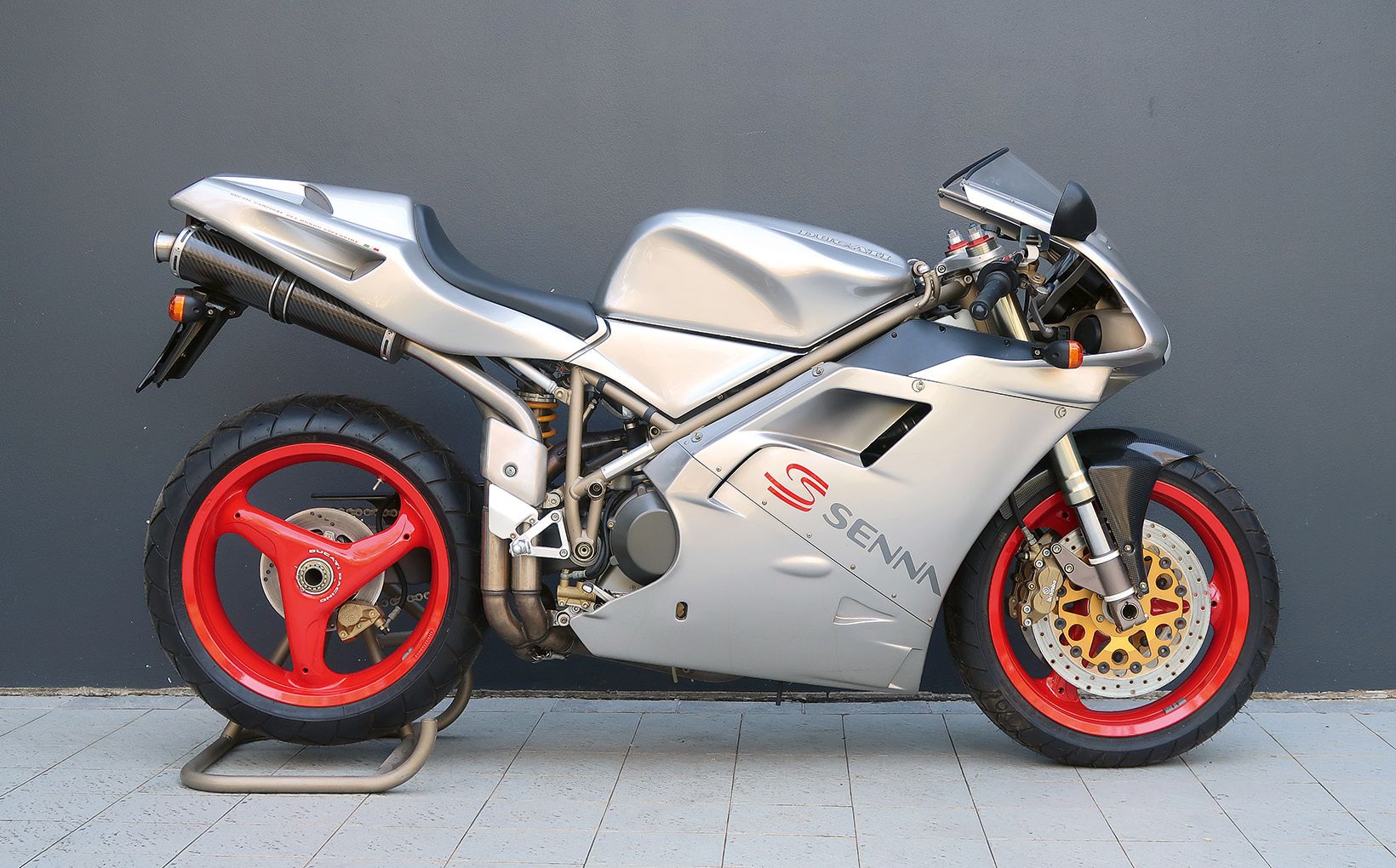 Never ridden and still in new condition with just 11km showing on its odometer, the Senna with its fuel injected, 4-valve, liquid-cooled, 90-degree, V-twin engine in a trellis frame is No 092 of 300 built, making it very attractive for collectors of the marque.

The model was released to commemorate Formula 1 World Champion, Ayrton Senna, an avid Ducati enthusiast and owner who endorsed its release shortly before his death in May 1994. Ducati released three Senna editions in 1995, 1998 and 2001 and in every instance, net proceeds were donated to the Instituto Ayrton Senna charity. For its iconic status, it is expected to sell in the $45,000-$55,000 range. 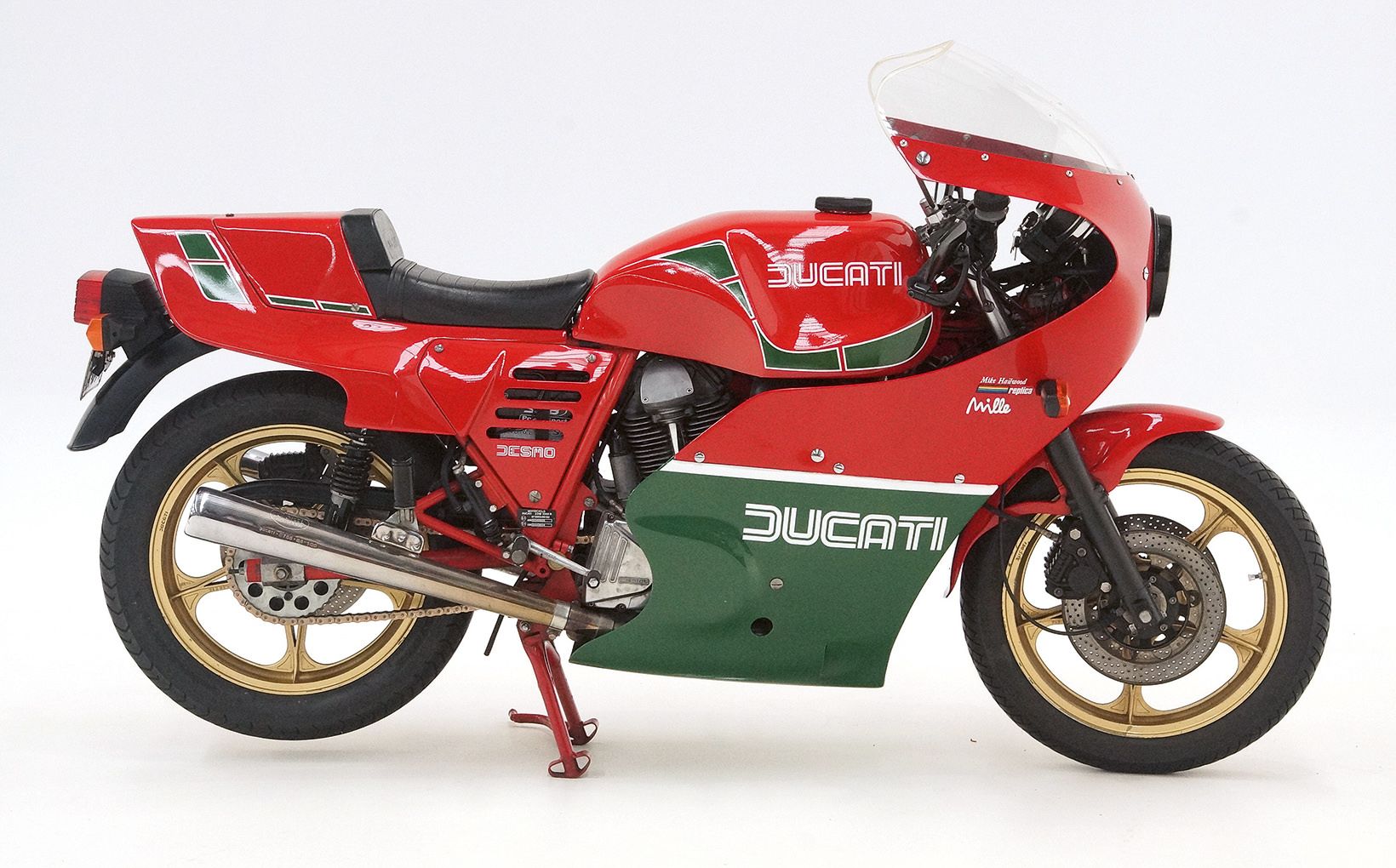 Another very collectible Ducati in the online auction is a 1986 Ducati Mike Hailwood 1,000cc replica ‘Mille’, from the final year of production, regarded as one of the most collectible of these limited-edition bikes.

Introduced to celebrate the accomplishments of legendary motorcycle and F1 car race ace Mike Hailwood, the V-Twin 973cc MHR (Mike Hailwood Replica) arrived in 1984 as a replacement for the already potent 900 MHR.

The example being auctioned is beautifully original, with its signature red-and-green paintwork and gold alloy wheels both in good condition, as is its black vinyl seat and all the other details. Fitted with the factory-optioned Conti mufflers, the bike has a nice patina of age, but nothing that needs obvious attention.

Just 1,100 of these Mille models were made in ’86, the final year of production, making this one of the most collectible Mike Hailwood tribute Ducatis of all, with Shannons expecting a sale in the $30,000-$38,000 range. 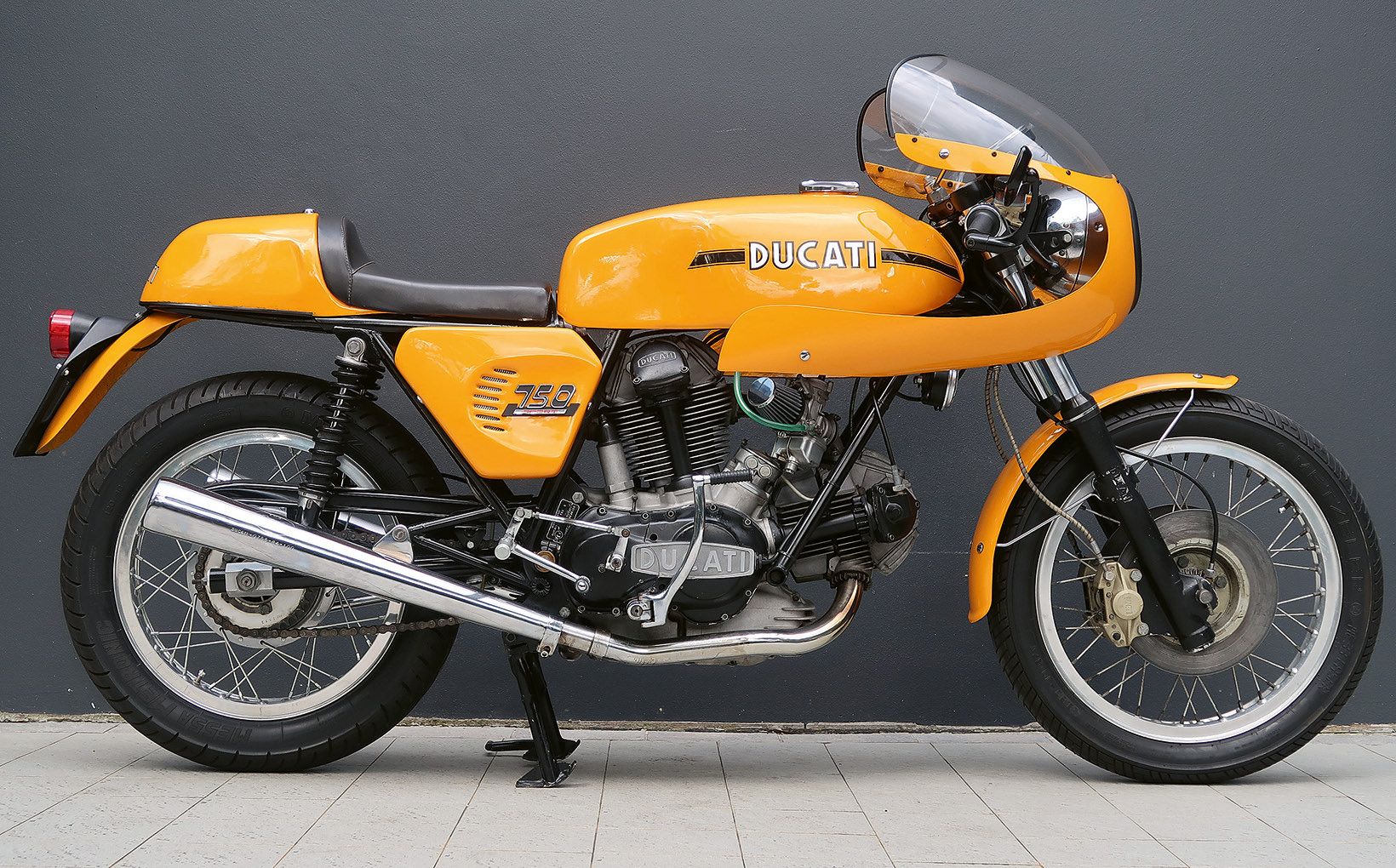 Finished in the marque’s iconic yellow, the Ducati features Dellorto PHF32A carburettors, a steel fuel tank, Conti pipes, Borrani wheels and Brembo front brakes. Last registered many years ago and stored for some time, the bike has been started and runs well, but will require some minor recommissioning before being used. With good provenance, this is a rare opportunity for the Ducati collector to acquire one of the most iconic models built in the 1970s, with Shannons projecting a selling range from $38,000-$44,000.

With an estimated 823 sold to Australia, these bikes today are seen as significant models in Ducati's history, employing the V-twin and desmodromic valve actuation that made the marque's legendary reputation. Superbly proportioned, the 750 GT also has undoubted charisma that spans the gap between classic and modern styling, with this iconic ‘Duke’ expected to bring $25,000-$30,000.

A potentially-cheaper alternative from the same era finished in period ‘orange’ is a 1978 Ducati 860 GT 'Café Racer' that is being offered with ‘no reserve’ and is expected to bring $15,000 - $18,000, representing great value.

Another fabulous Ducati road racing replica is a late production 1988 750 F1 with updated spec. Production of this road-going production version of the of the Pantah-based 600 TT2 and 750 TT1 bikes of the early 1980s and although production of the 750 F1 officially ended in late 1986, the bike remained on sale in the United States until 1988. 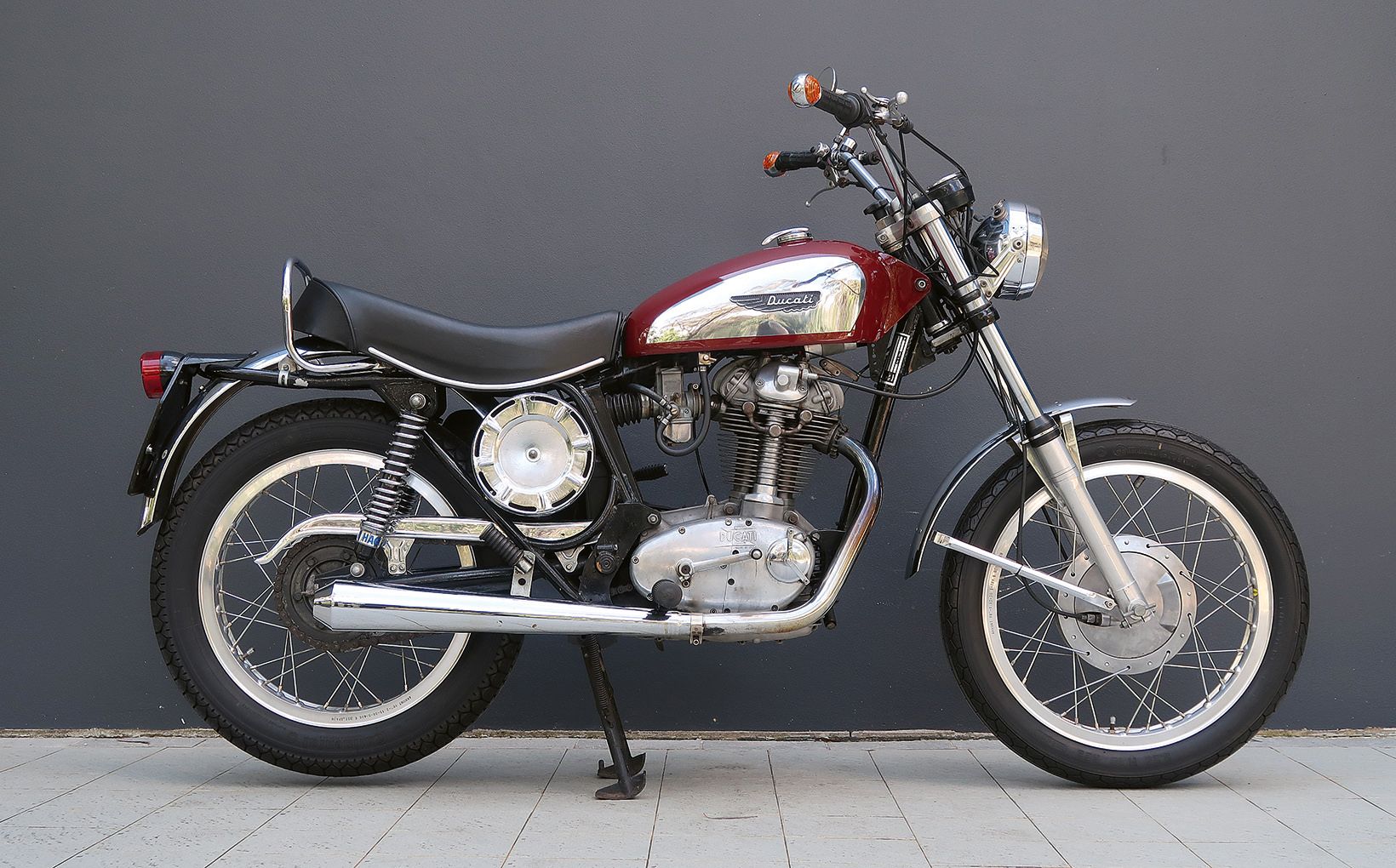 Scramblers are making a market return in many motorcycle ranges, but this rarely-seen 1971 Ducati 450 Scrambler that has had one owner from new, was one of the originals.

Finally, with many motorcycle brands bringing back Scrambler models to their line-up in recent years, Shannons are offering a rarely-seen 1971 Ducati 450 Scrambler that has had one owner from new and comes to the online auction fresh from a recent engine overhaul.

With its 436cc capacity engine, the 450 Scrambler was the precursor of the modern Motocross bike and Ducati was at the forefront of the craze in the early 1970s with a series of overhead-camshaft singles designed specifically for riding on dirt.

Always a dual-purpose bike, the 450 Scrambler also performed well on the road and remained a popular member of the Ducati line-up until 1978.