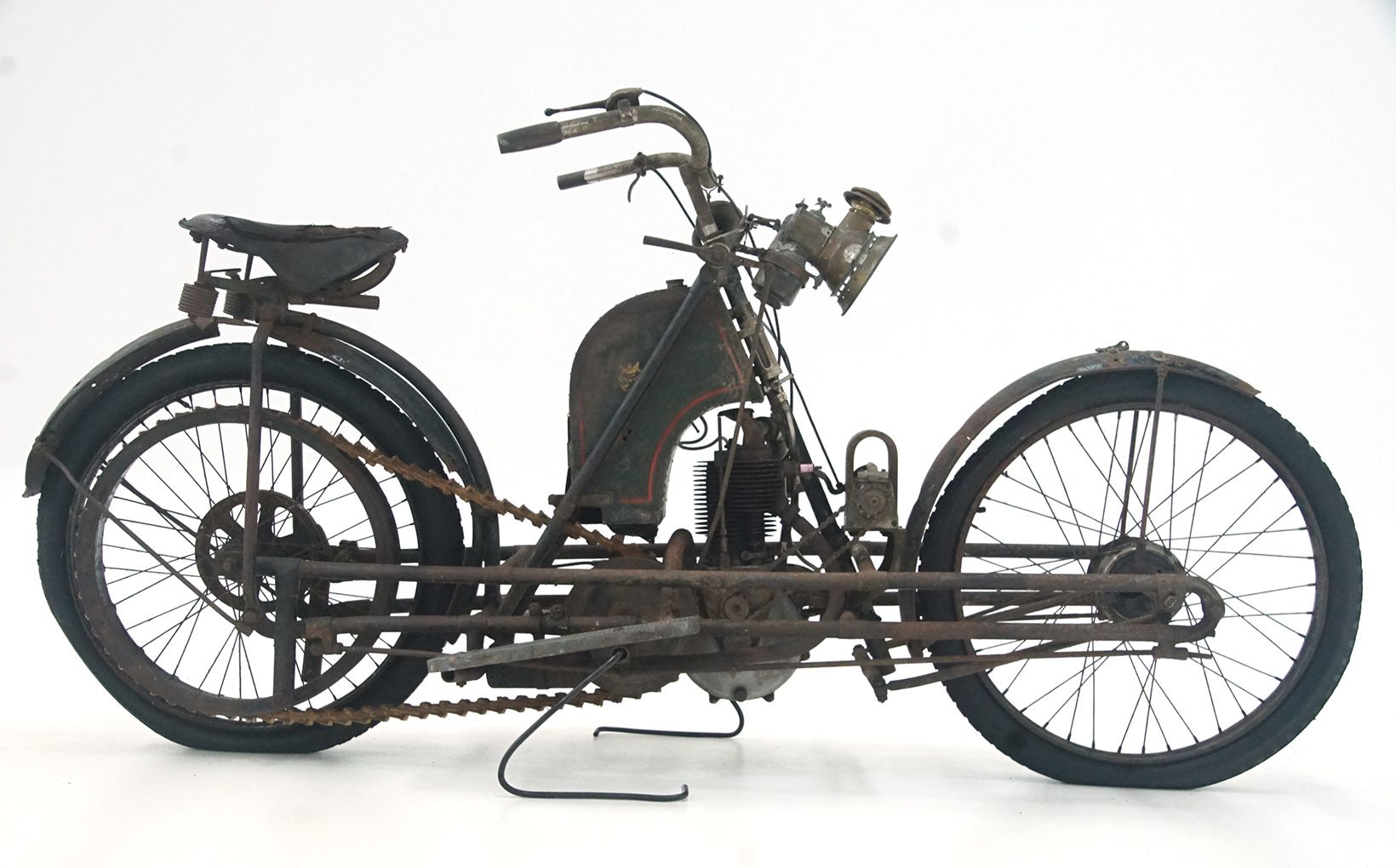 A fabulous assembly of rare veteran and vintage motorcycles from noted Victorian collector and enthusiast Warren Hicks is an early highlight of Shannons Timed Spring Online Auction from 11-18 November.

With build dates ranging from circa-1907 to circa-1925, the six special motorcycles in Hicks’ collection are all being offered with ’no reserve’, giving two-wheel enthusiasts the opportunity to either start, or add to, a unique collection of early machines. 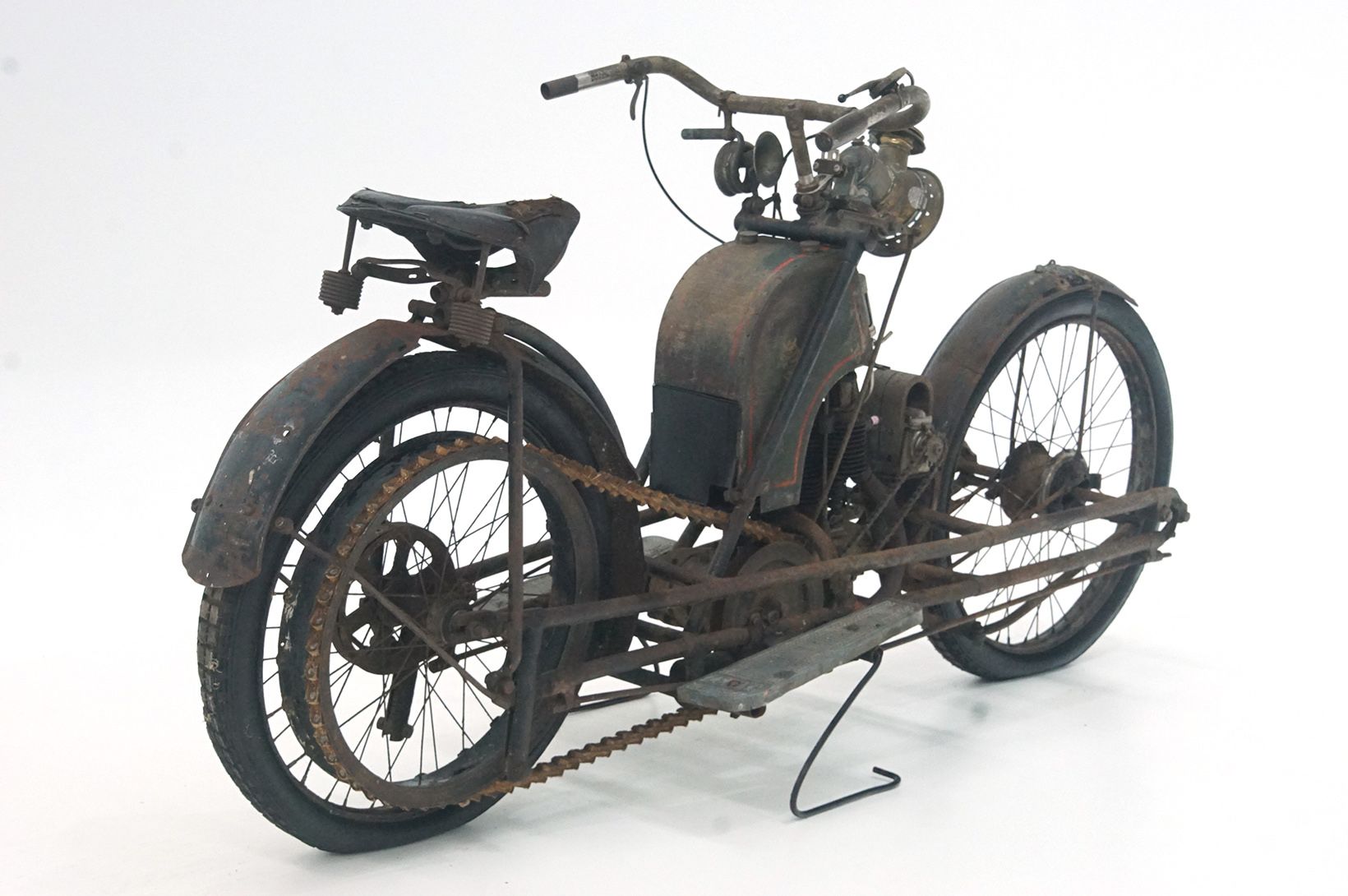 This circa-1907 Zenith Bi-Car that is the only known example to exist of this radical design with its front wheel hub centre steering, is expected to attract strong international interest in the $50,000-$70,000 range.

Although each of the motorcycles is rare by world standards, the historical standout is the earliest – a circa-1907 Zenith Bi-Car, frame No 3, which is the only known example to exist of this radical desig, with its front wheel hub centre steering.

A true survivor, offered in ‘barn find’ condition, the Zenith Bi-Car has mythical status in the International motorcycle scene and the example being auctioned has not been seen in public since 1974. 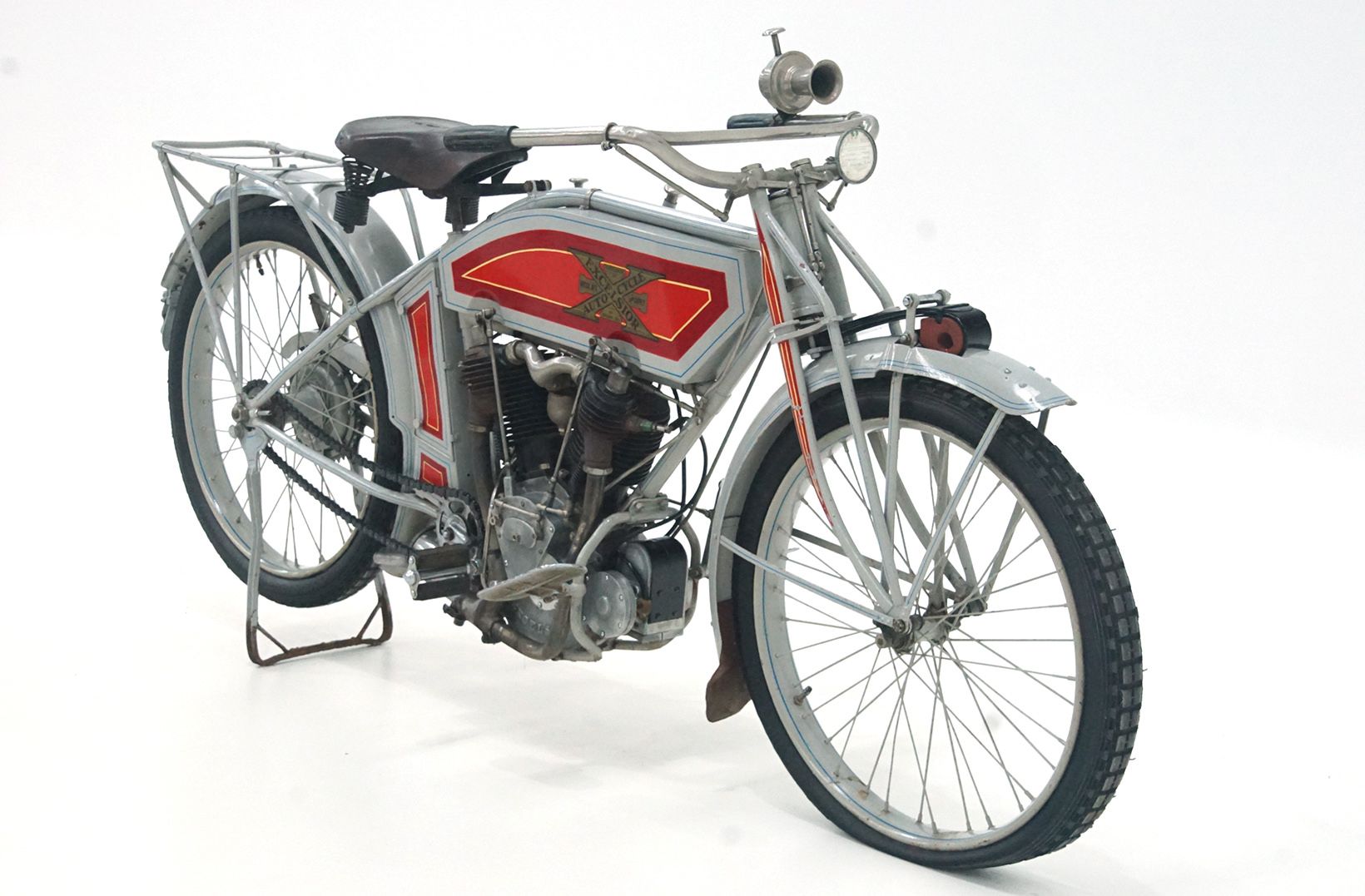 Equally appealing to serious collectors is a circa-1914 American Excelsior V-Twin 1000cc ‘Two speed’, whose ‘X’ designation distinguishes it from a English Excelsior.

Complete, but not run since 1978, the Excelsior features a 1,000cc V-Twin engine, cast iron footboards and a foot brake pedal.

The Excelsior is notable as the first of the two speed gearbox motorcycles, with its left handlebar grip operating its clutch and as such is expected to sell in the $40,000-$60,000 range. 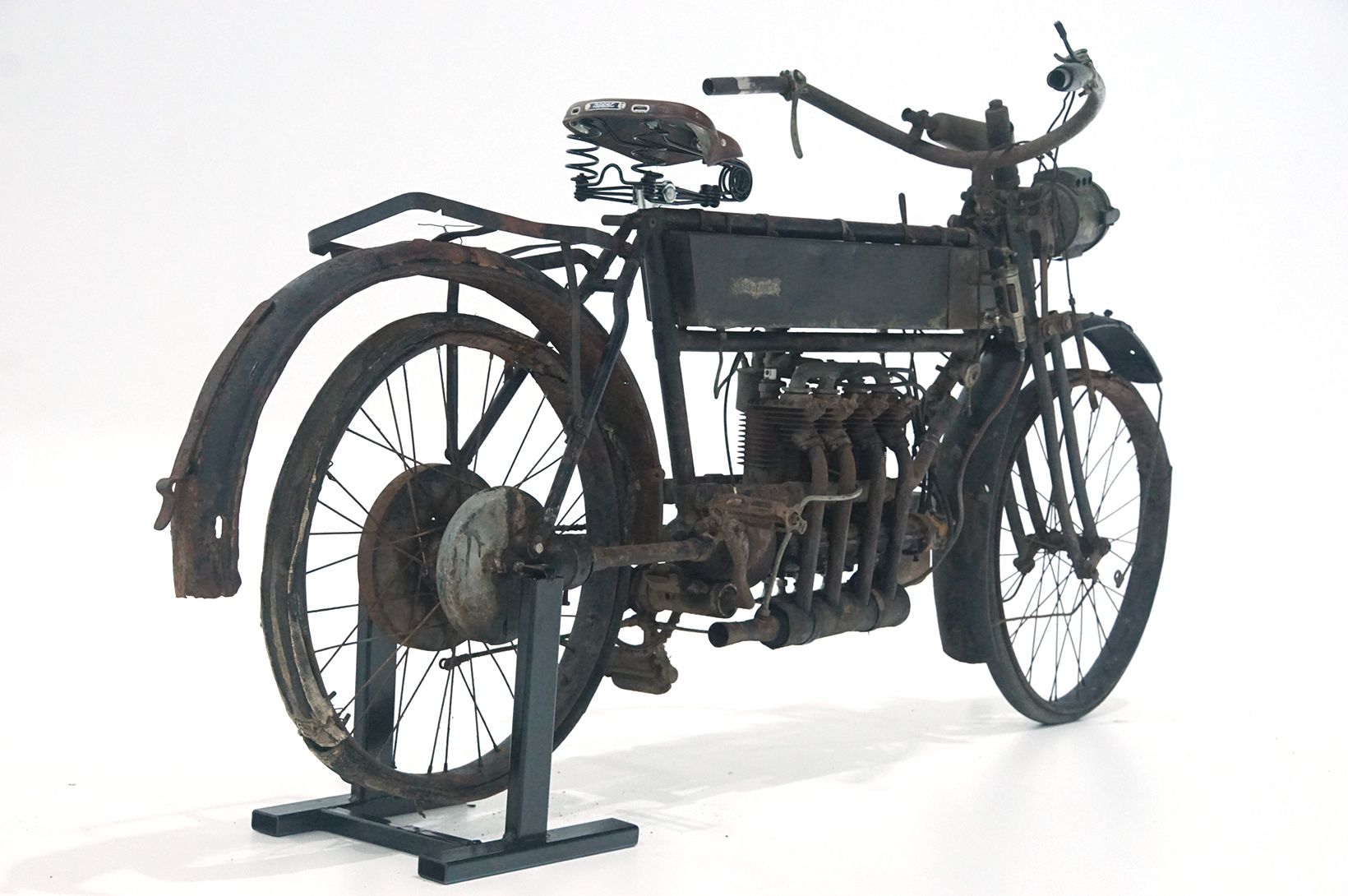 A circa-1910 FN ‘Four’, presented in very complete and original but unrestored project condition, is also expected to be in demand with early motorcycle collectors.

This very rare four cylinder early single-speed, shaft-drive motorcycle has a great local history, having been with its current owner since 1970 after beginning its local life in Broken Hill.

Certain to command world-wide interest, it is expected sell in the $40,000-$50,000 range, complete with a package of parts, including spare four cylinder engines. 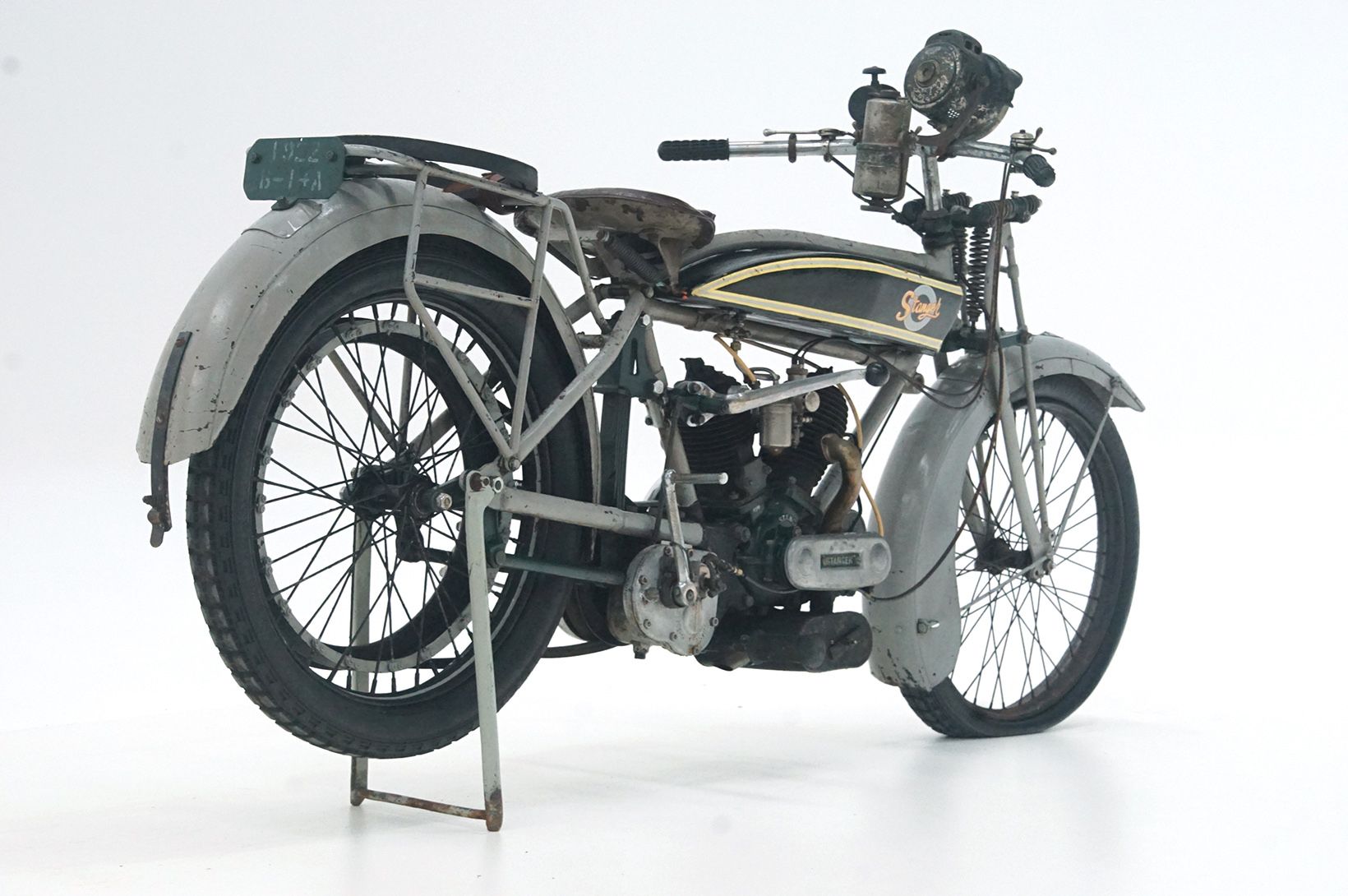 For a similar investment, there is an exceptionally rare circa-1922 Stanger V-Twin 538cc ‘two-stroke’ motorcycle – one of just two known survivors worldwide out of just 20 made – with the only other know survivor currently in a British museum.

Moving into post-World War I Vintage motorcycles, there is a circa-1922 KG Cito Special 500cc OHV and a circa-1925 Villiers-engined Diamond 147cc.

The 500cc OHV German-built KG Cito is one of just three believed to exist today, as the company was taken over by Allbright in 1923.

Equipped with shaft-drive and a Bosch generator for its electric lighting, this very rare early German motorcycle is expected to sell with ‘no reserve’ in the $40,0000-$50,000 range.

The Diamond 147cc is the last of the chain-cum-belt motorcyles built and being an ultra-lightweight basic commuter machine of its day, has no front brake, clutch or kickstart. Offered with ‘no reserve’ and in nice, complete condition, it is expected to bring $5,000-$8,000.

For further information, or to arrange a virtual video tour or inspection appointment of any specific lot, contact the Melbourne or Sydney auction teams on 13 46 46 (Option 6), or by email on auctions@shannons.com.au