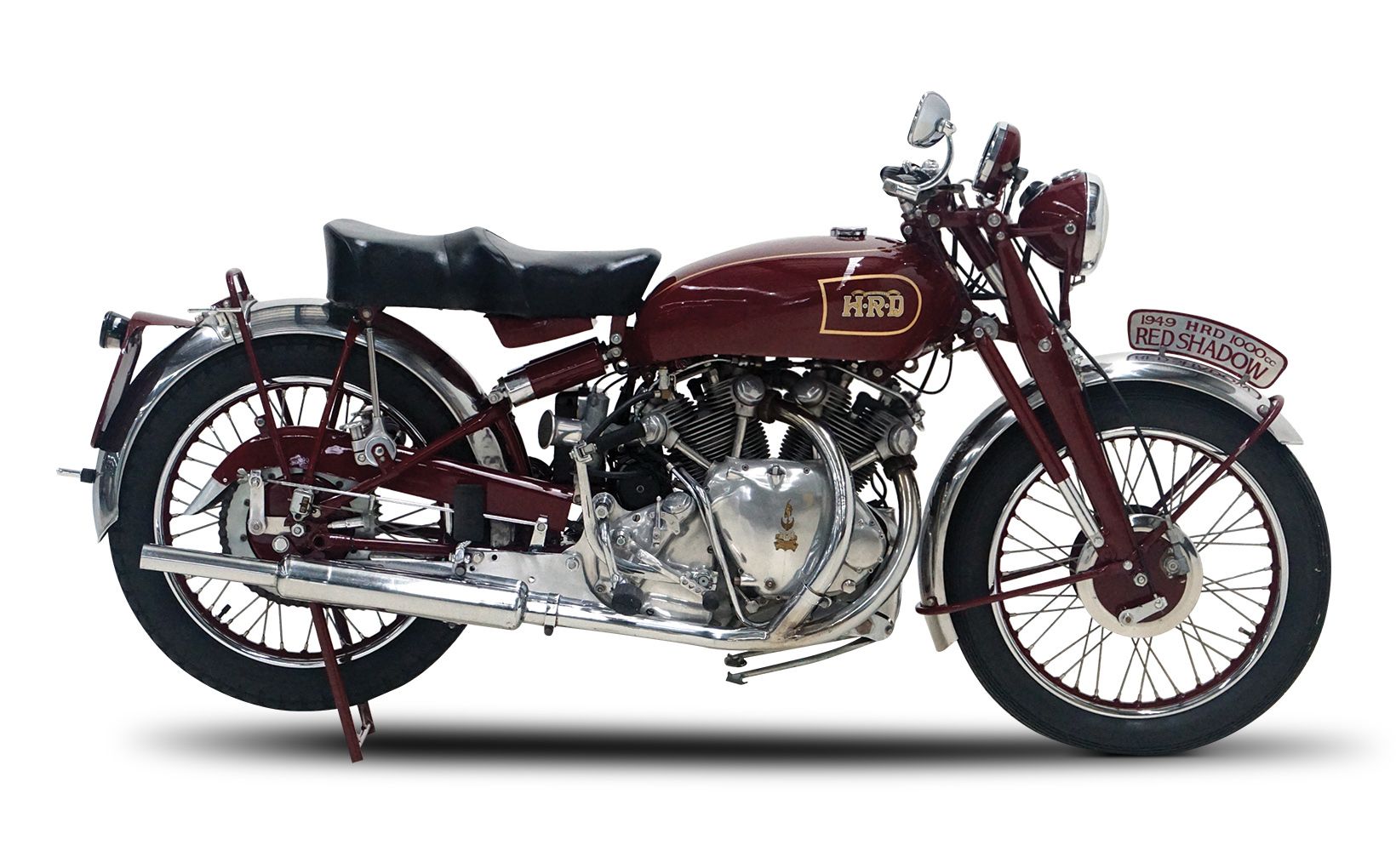 There’s something for British motorcycle enthusiasts of all ages in next week’s Shannons Timed Online Autumn Auction that runs from May 17-24.

For serious collectors, the leader of the pack is unquestionably a legendary fully-restored 1949 Vincent H.R.D Rapide C-Series motorcycle from the collection of Bruce Armfield, former president of the H.R.D Vincent motorcycle club collection and an authority on the subject.

Manufactured in 1949 and factory fitted with 1-1/16th inch carburettors, a 120mph speedometer and 3.00 x 20in front and 3.5 x 19in rear rims, the bike has been fully restored some years ago and still presents beautifully today.

Regarded as one of the greatest motorcycles of the 20th century and maintained by a Vincent enthusiast, the ’49 Rapide is now ready for a new chapter in its long history.

Because of its world-wide collectability and restored condition, it is offered for sale with ‘no reserve’ and expected to sell in the $80,000 - $100,000 range. 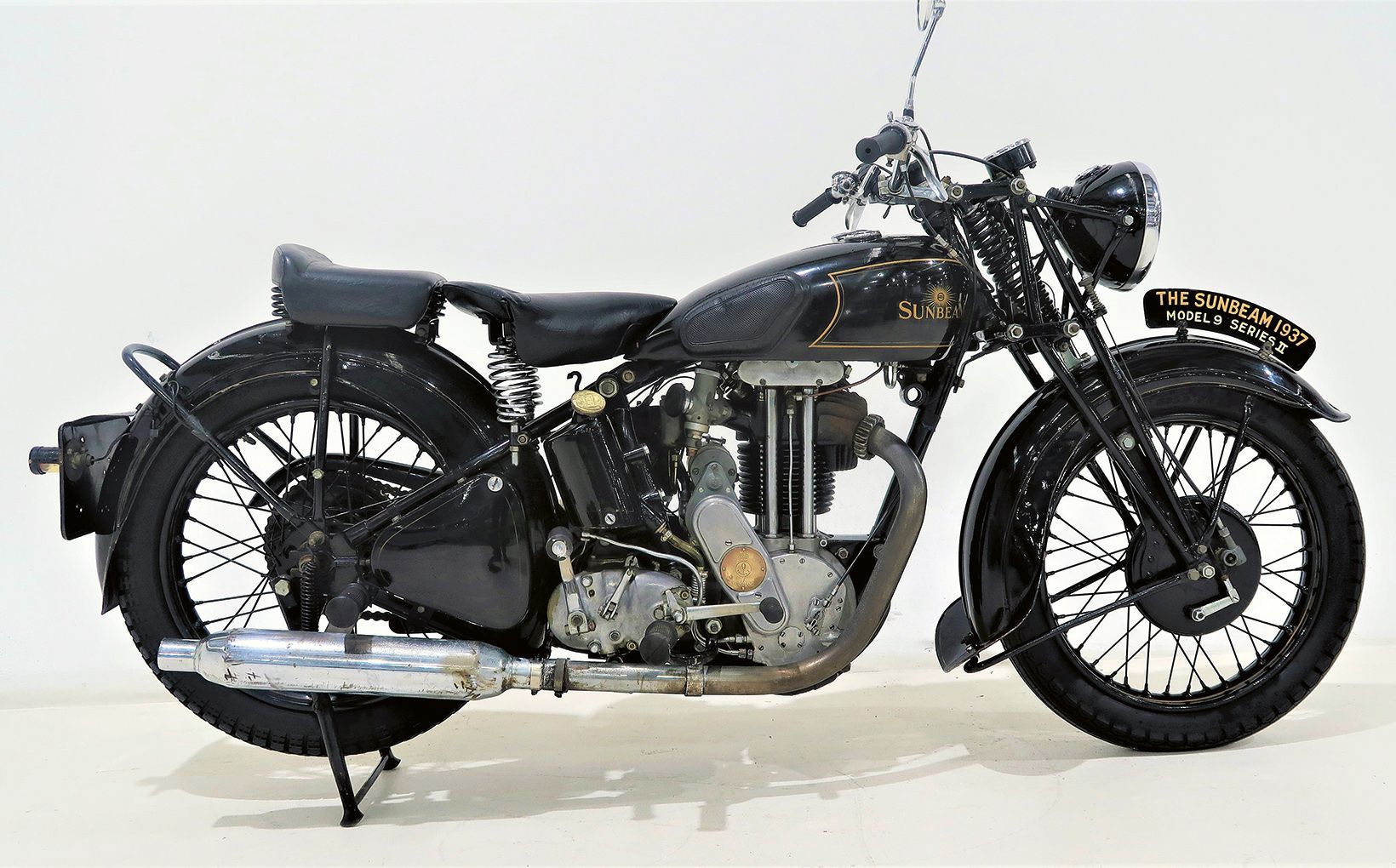 Other great British motorcycles in the auction include a 1937 Sunbeam Model 9 Series II Motorcycle that was at the forefront of modern motorcycle in its era, with an all-new frame design with a saddle tank for the 1929 model year.

Other changes made in 1930 included enclosed pushrods and valve gear, dry-sump lubrication along with a six-spring clutch and adjustable damping on the front fork, while a twin port cylinder head, Lucas Mag-dyno electric lighting and a sidecar were the other options catalogued in 1930.

As these classic British motorcycles are rarely offered for sale in Australia, Shannons expect this lovely example of Sunbeam’s sporting Model 9 with its interesting history dating back to 1937 to sell in the $16,000-$20,000 range.

Now eligible for all manner of historic motorcycle events, this rare and desirable British classic is expected to be demand with collectors and sell with ‘no reserve’ in the $15,000-$20,000 range.

The c1955 Tiger T100 Alloy is from the Bruce Armfield collection and is a very nice older restored example, having not seen much use in recent years.

The 1965 Bonneville T120C was famous motorcycle engineer Edward Turner’s last new design and was named after the famous salt flats in Utah where Triumph and others set multiple speed records.

Perhaps the world’s most famous motorcycle, the ‘Bonny’ is offered in beautiful condition and appears to have been the subject of a complete rejuvenation that includes the fitting of a rare luggage rack on its tank.

Based on Triumph’s classic 6T Speed Twin that on its launch in 1949 could rightfully claim to be the most powerful parallel twin available on the market, the 1960 Thunderbird was popularised by Marlon Brando’s appearance in the 1953 movie ‘The Wild One’,

The 1960 model Thunderbird had its twin cylinder engine bored from 500cc to 649cc, and featured a larger carburettor and a compression ratio raised from 7.0:1 to 8.0:1, allowing it to develop 34 horsepower.

To demonstrate its performance , Triumph arranged for a series of high-speed demonstrations at the famous banked Montlhéry circuit near Paris, covering 800 kilometres at a then-incredible average of more than 145 km/h.

Fully restored and fitted with a sought-after ‘Ramp Cam’ factory engine and an unusual ‘bathtub’ rear fairing, it is expected to sell with ‘no reserve’ for $20,000-$25,000. 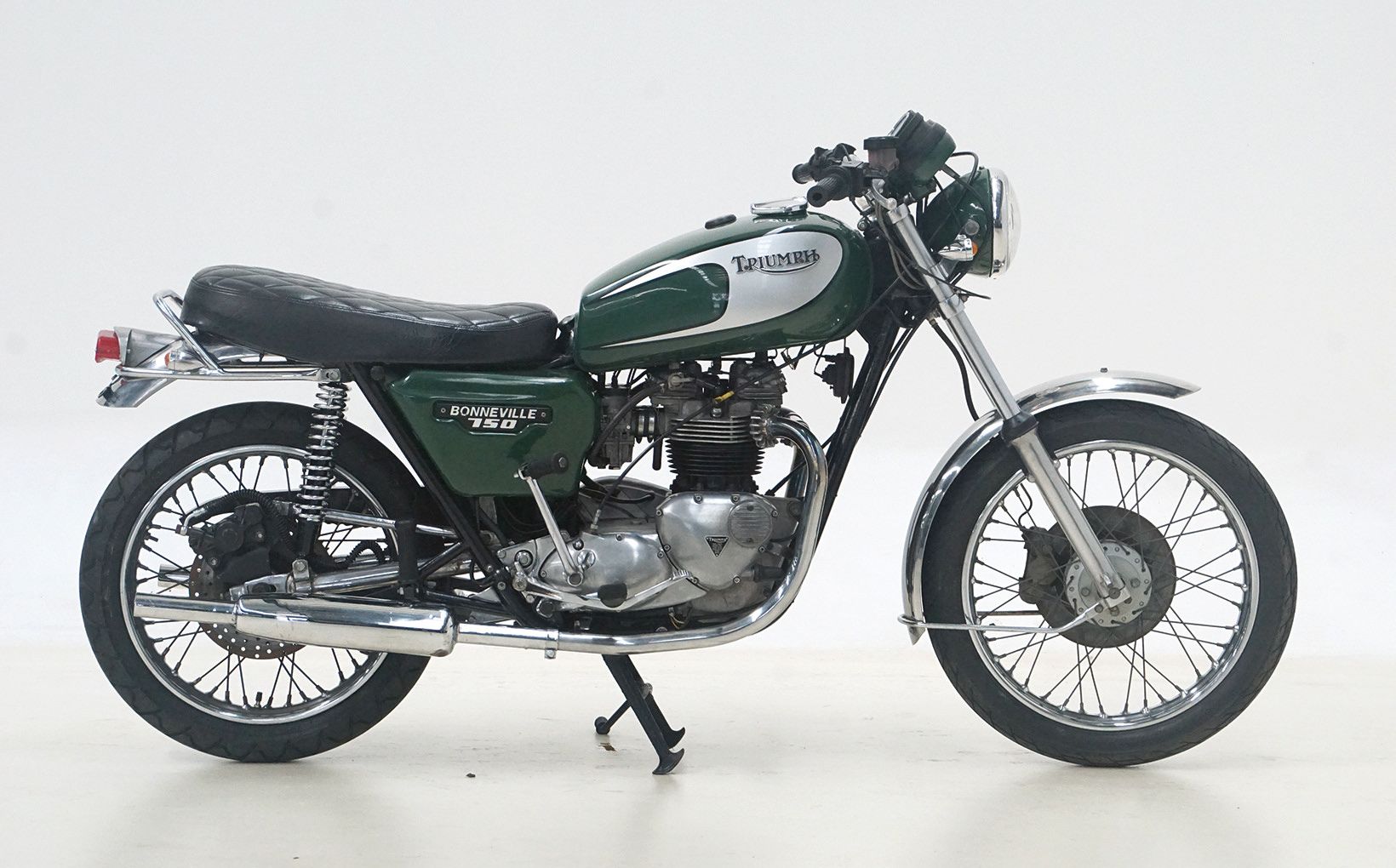 There is also a 1982 Triumph Bonneville 750cc in excellent original condition that indicated just 21,510 miles at the time of cataloguing.

Launched in 1959 by Triumph as "The Best Motorcycle in the World", the Bonneville T120 was aimed mainly at the lucrative US market where enthusiasts were demanding extra performance. In 1968 the T120 gained a new and more reliable ignition system for its powerful 750cc Triumph parallel twin engine and with an upgraded drilled rear disc rotor, the Bonneville being auctioned is offered in great shape and ready to ride. 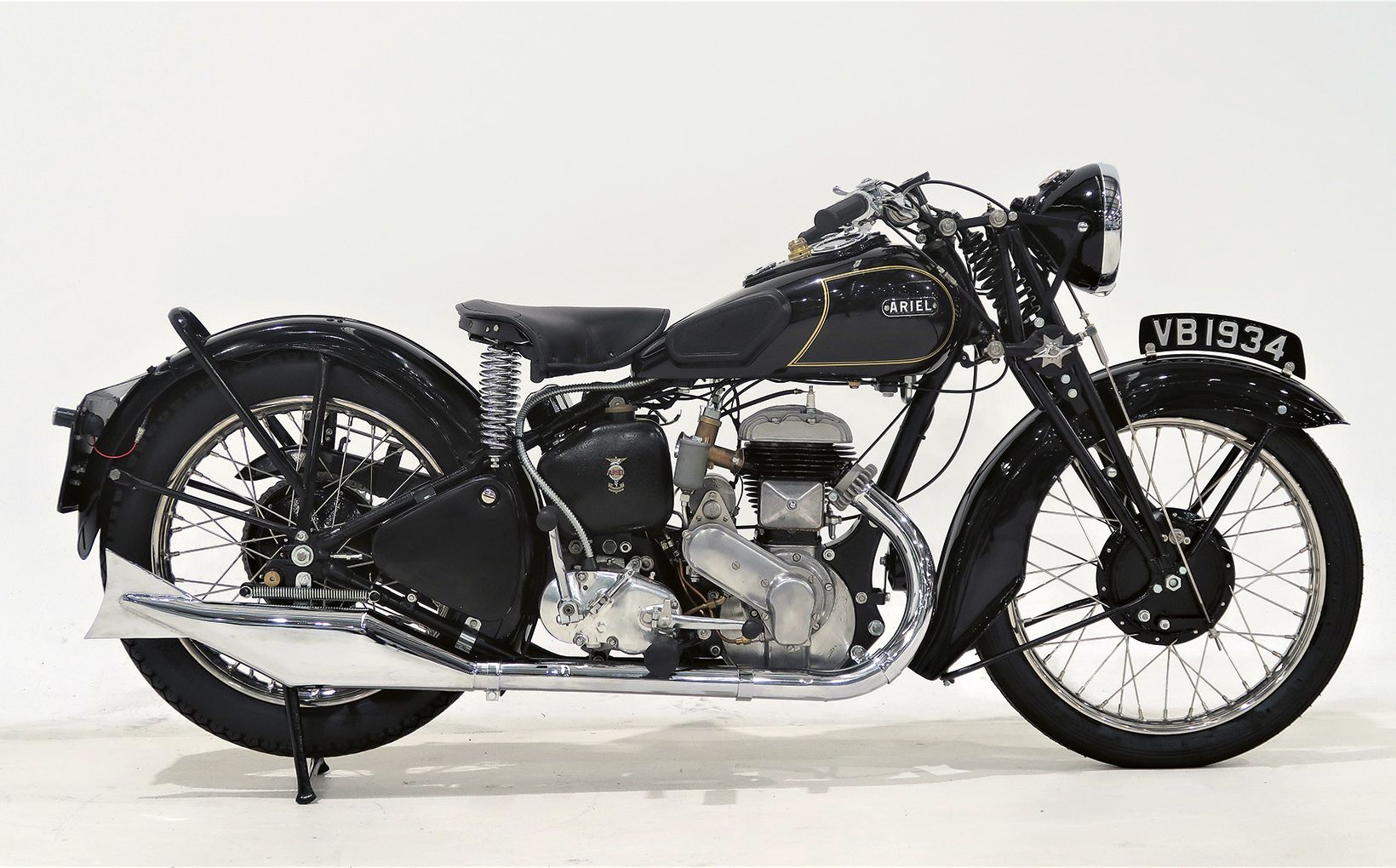 Mated to a Burman four-speed gearbox, the side-valve VB 600 with its torquey four-stroke 18 horsepower single cylinder engine, had a supremely comfortable upright riding position and safe, predictable handling, making it ideal for a sidecar combination.

Freshly restored with no expense spared, the Ariel is supplied with a Dating Certificate, making it an excellent club machines today. 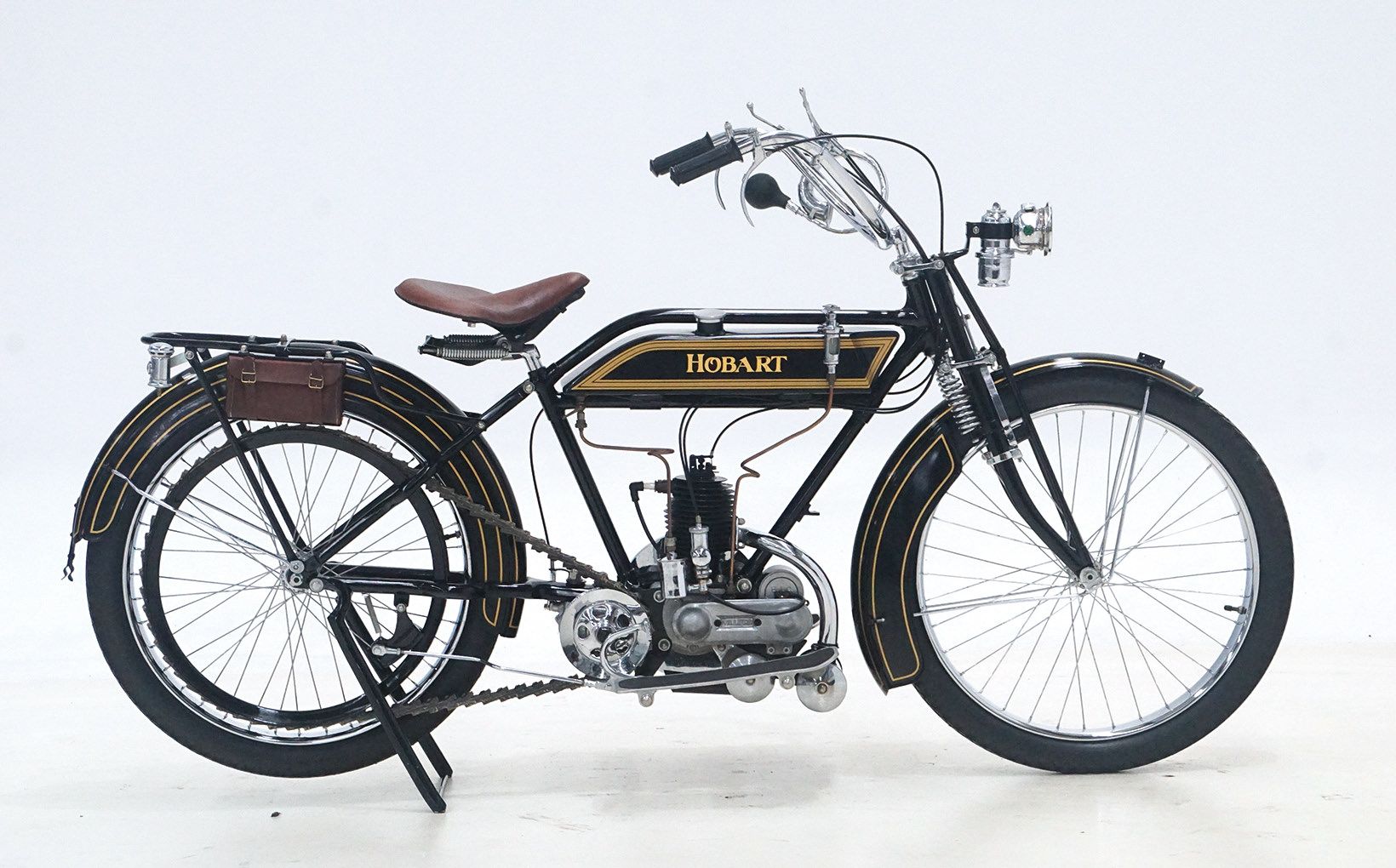 Finally, for collectors of early motorcycles, there is a c1914 Hobart 225cc Two Stroke motorcycle in the auction.

Representing a superb restoration, the origins of this super-rare UK-built motorcycle date back to 1892 when an advertisement appeared for a ‘Hobart’ bicycle being produced in Wolverhampton.

Part of the Bruce Armfield Collection, the Hobart has been superbly restored and presents beautifully. It is powered by a 225cc two-stroke single cylinder engine, has a rear brake only, a bulb horn and an acetylene headlight with only a few small touches required to complete this outstanding example of a globally rare early motorcycle.

The auction also includes a number of significant Japanese, American and Italian motorcyles, mini-bike and scooters.