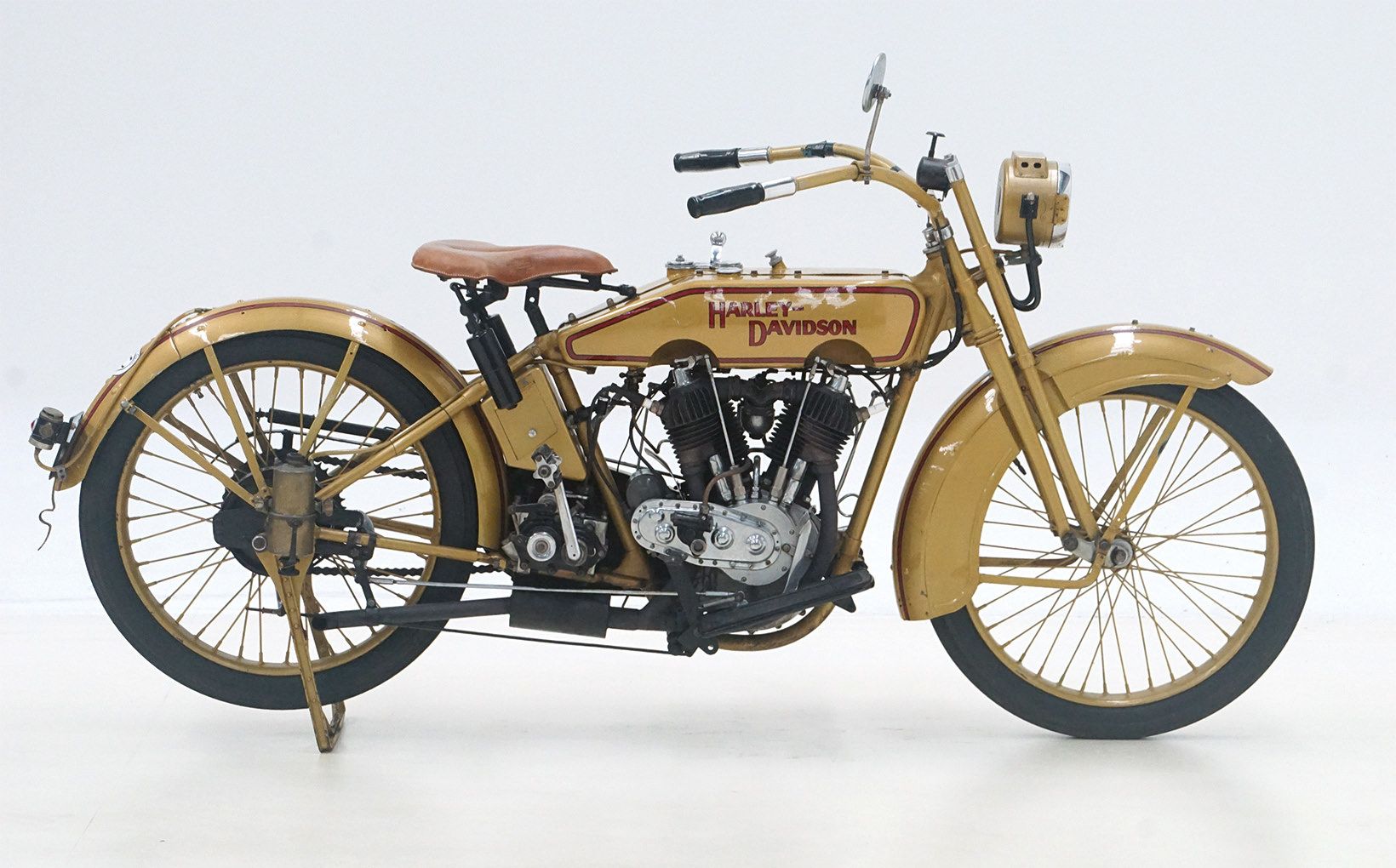 A total of 35 motorcycles, including a number of rare and collectible US models as well as some great British and Japanese classics, are lining up for Shannons 40th Anniversary Timed Online Auction from 23-30 November.

Representing the top of Harley-Davidson’s line-up at the time and fitted with the most powerful engine then in the company’s range, the Model F is an iconic bike well recognised by all motorcycle enthusiasts.

Painted in period ‘Olive Drab’ and fitted with a genuine Harley Davidson-branded tan leather seat, Acetylene lighting and a Claxton horn, the bike has been well looked after and is in good general running condition, making it an excellent candidate for events such as the Cannonball Endurance Rally motorcycle run at its expected selling price of $54,000-$60,000.

The four other Harley-Davidsons on offer include a fully-restored 1942 WLA with Dustings sidecar. Presented in running condition with full WWII livery, this is one of the best examples to come to market in recent years and is expected to sell for $35,000-$45,000.

For avid Harley collectors, there is a rare, totally unrestored 1934 VFD 1200cc Solo – one of just five produced – that was found under a house in the Melbourne suburb of Glen Waverley where it sat undisturbed and undiscovered for more than 50 years. This rare VFD is a sought-after motorcycle jewel and although not currently running, it is expected to bring $60,000-$70,000. 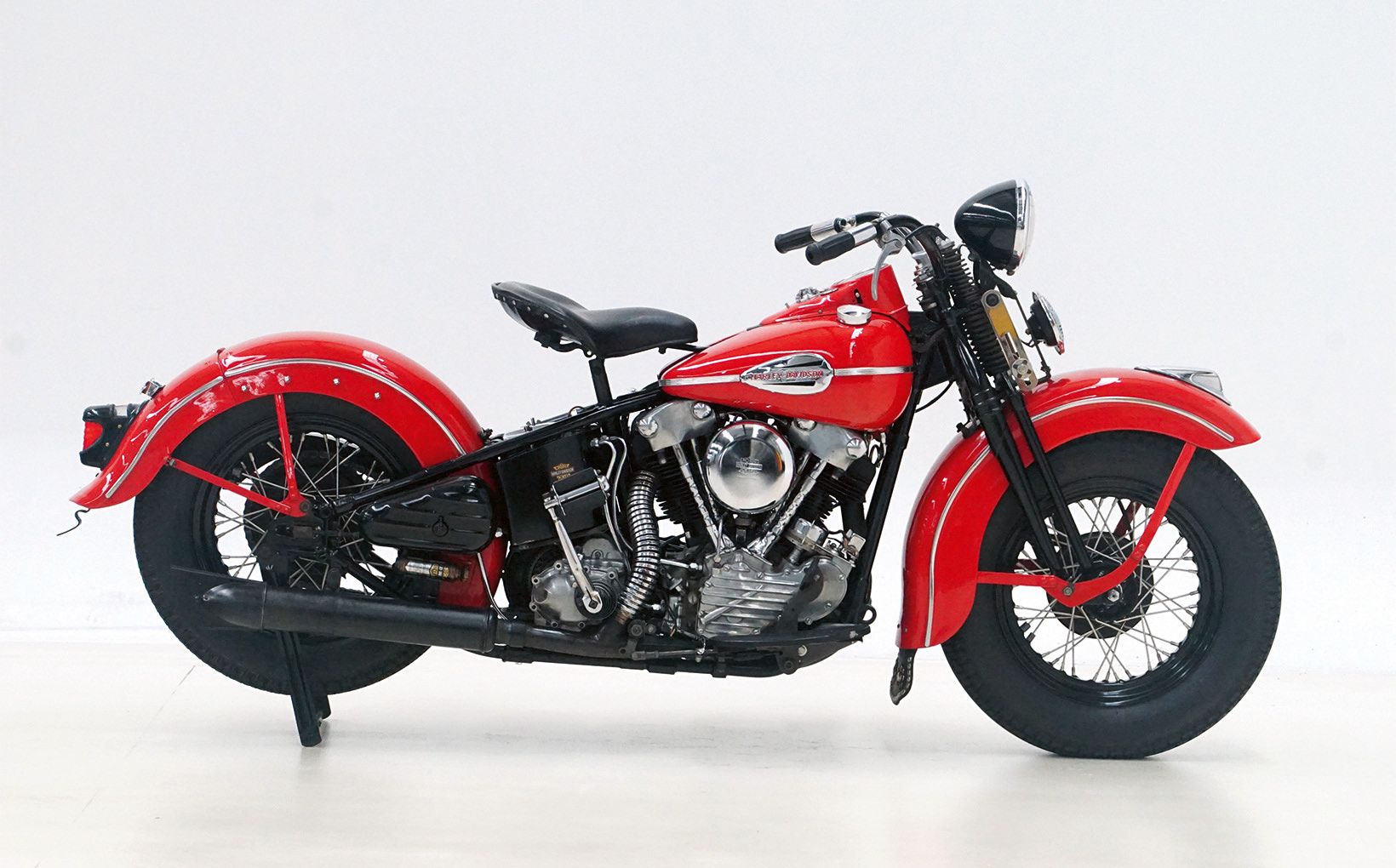 Harley Davidson knew all about overhead valve motorcycles even before 1915, when the company designed its first eight-valve racers. This advanced feature in 1936 was incorporated in the new EL model, also known as the ‘Knucklehead’.

The new technology, along with a reliable, proper recirculating oil system, was immediately embraced by the public, with a nicely-restored 1941 EL Knucklehead 1000cc solo – one of less than 2,500 made in 1941 – presented in running condition expected to sell for $75,000-$85,000.

The most modern Harley in the auction is a one-off 2014 XL1200cc Sportster Custom motorcycle that has covered just 2,515km since its completion six years ago in the one ownership of a renowned car and motorcycle collector and is expected to sell for $15,000-$25,000.

Three great Nortons from 1949-1975, a mighty Triumph Bonneville, a 1970 Royal Enfield and a spectacular Triumph Hurricane, are other British bike stars on offer.

Particularly notable is the 1949 Norton Dominator 600cc presented in the style of the famous London Café Racers of the 1950s, which is offered in running condition. Offered with ‘no reserve’, it is expected to sell in the $12,000-$15,000 range. 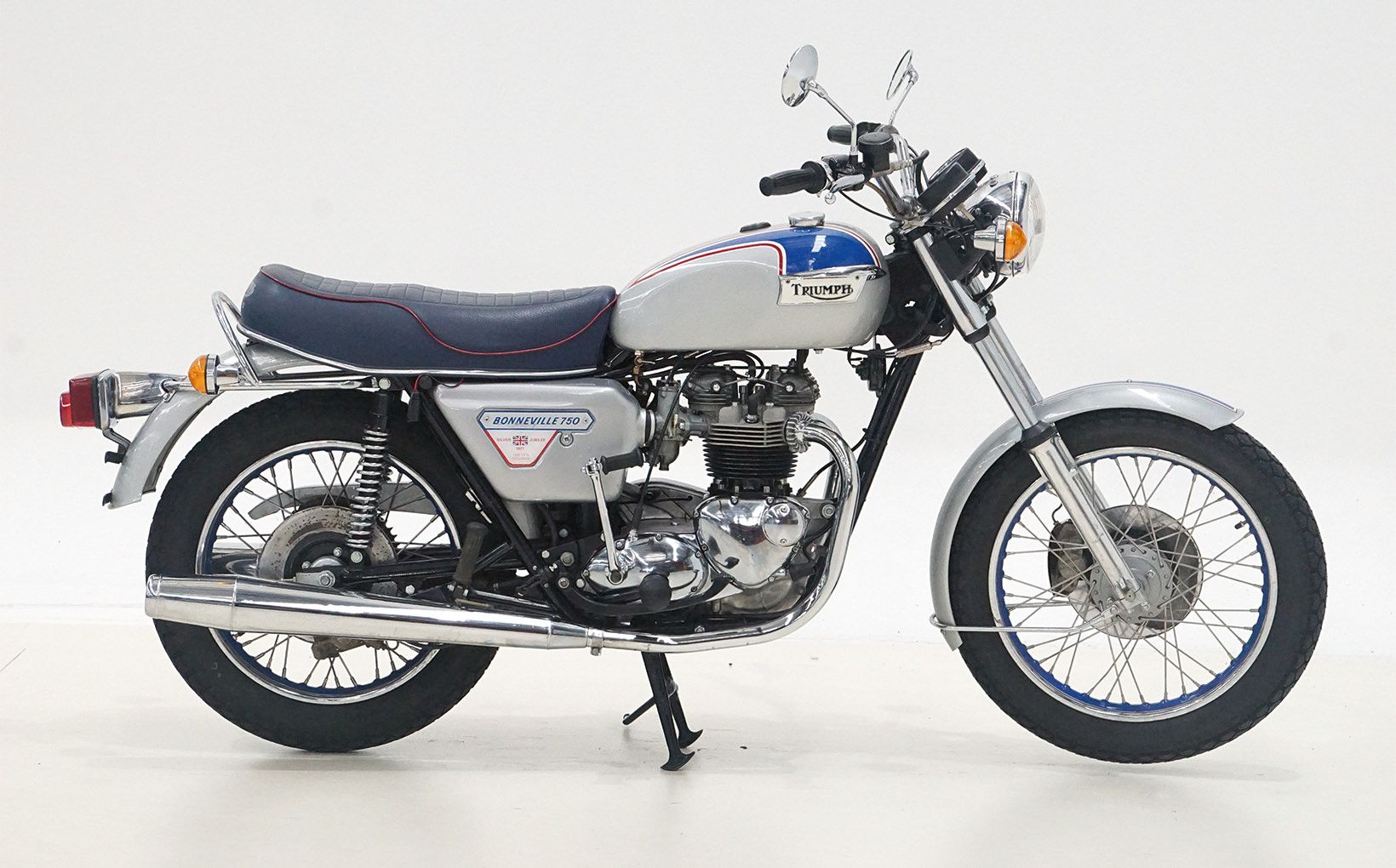 Also very desirable for Triumph collectors is an immaculate and rare 1977 Bonneville 750cc Silver Jubilee motorcycle – a model that marked the 25th Anniversary – the Silver Jubilee – of Elizabeth II being crowned Queen of England, in 1952.

One of just 1,000 made initially, all featuring Girling’s then-new ‘Upside-Down Shocks’ with exposed springs, the bike is presented in excellent condition, ready to enjoy on club runs and events, or simply to display, with its expected sale price of $15,000-$18,000. 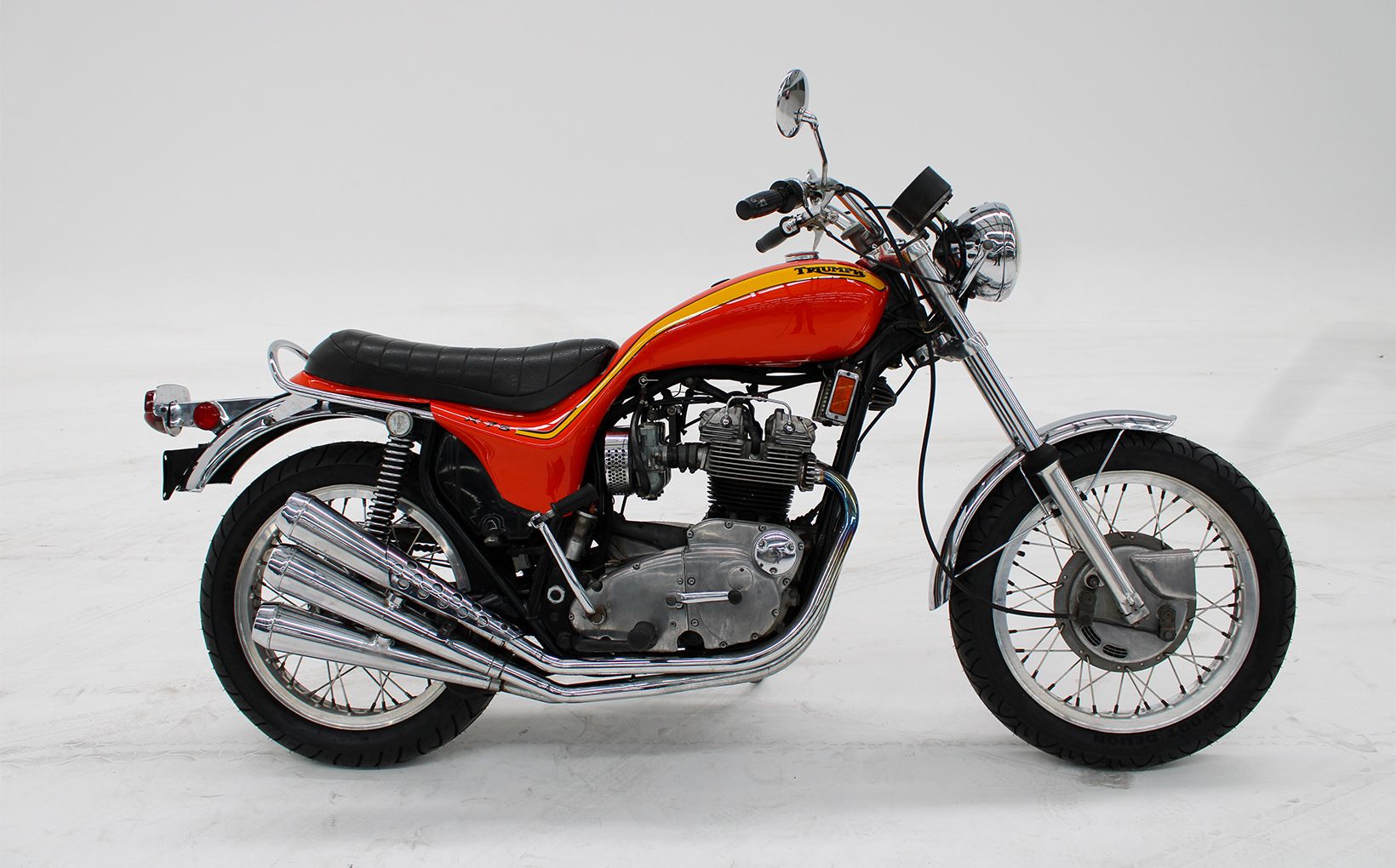 Undoubtedly one of the most trendsetting motorcycles of its day, and a ‘hero’ of the auction is a 1972 Triumph Hurricane X-75 Motorcycle – a triple-cylinder model rarely offered for sale.

It represents a worthy motorcycle hero of the auction, with the radically-styled and trend-setting cruiser being one of just 1172 built and showing just 12,674km on its odometer, expected to sell in the $36,000-$42,000 range.

Rare in this country, the 1970 Royal Enfield Interceptor Series II has been owned by the vendor since it was just a year old. Presented in immaculate condition following a four-year restoration, it is expected to sell with ‘no reserve’ for $10,000-$15,000.

Italian motorcycles are represented in quality if not quantity in the auction, with the stand-out being a stunning 2003, four cylinder Yamaha-powered Bimota YB11 Superleggera that combines Italian suspension with a top-level Yamaha engine to create a unique sports bike.

Recently pulled down and re-assembled over seven weeks and presented in magnificent condition, it is expected to bring $20,000-$25,000. 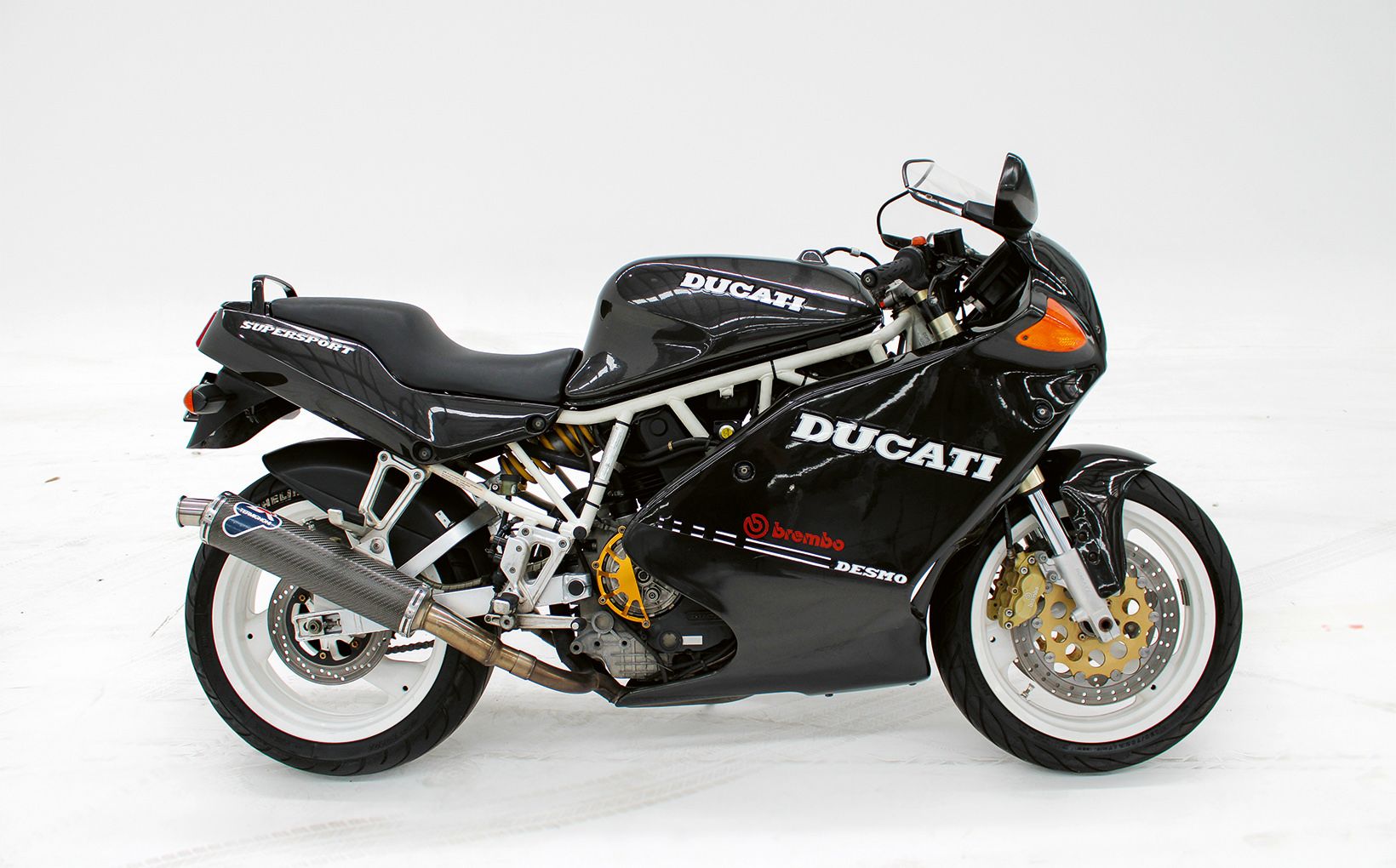 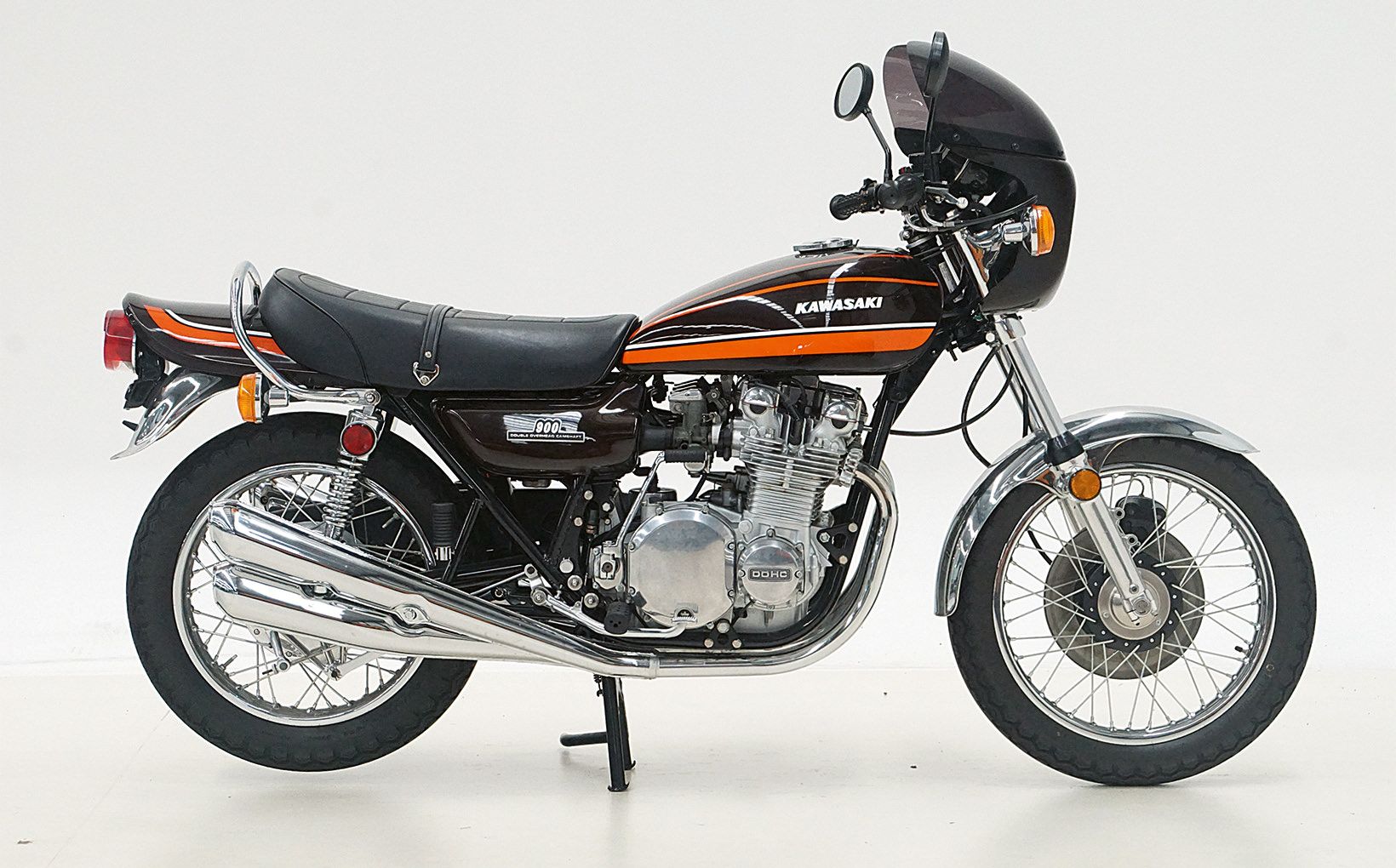 Four Yamahas are on offer, with the most radical-looking being a 1978 twin cylinder XS650 Storm 'Phil Little' Special Edition with very low kilometres that has the classic, custom look of a Triumph Hurricane for a much lower estimated selling price of $10,000-$14,000.