What better present for the legion of rusted-on (no pun intended) Alfisti out there than the ultimate version of the best car the Italian brand has made in decades? 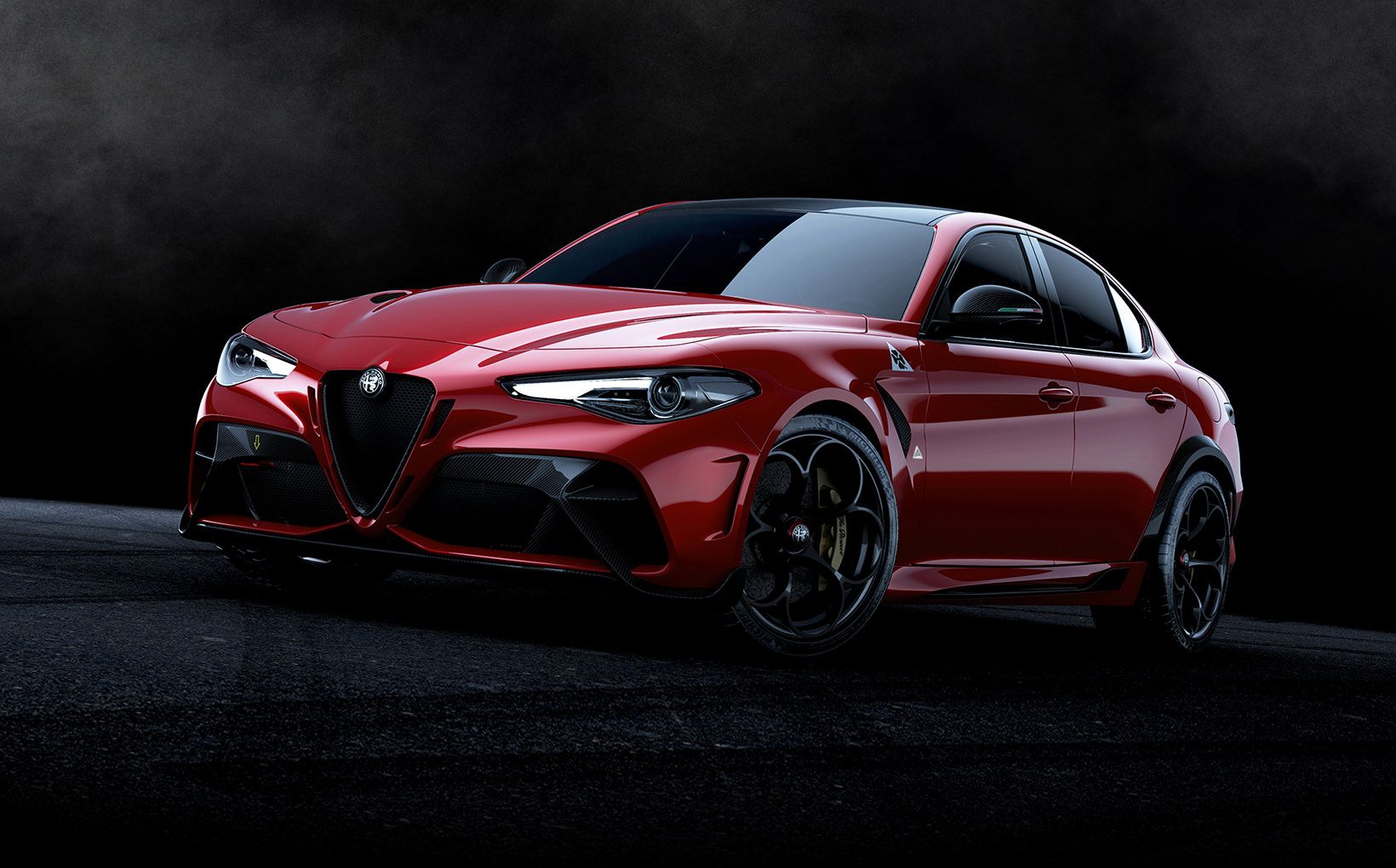 The ‘standard’ GTA is a more road-focused sports sedan, with a much smaller rear spoiler as its easiest identifier.

While the 952-series GTA commemorates Alfa Romeo’s 110th birthday, it’s a pretty exclusive piece of kit, limited to just 500 units worldwide. Furthermore, whether we’ll actually even see it reach Australia is anybody’s guess at this stage.

We’re immensely glad Alfa’s developed this be-spoilered fire-breathing beast anyway, because it is also a desperately needed fillip for a range that is all-too unfairly ignored by the buying public, despite much fanfare as the company’s comeback kid back in 2016.

The hope is that more premium medium sedan buyers – especially those who value driving verve above all else – will take a long and hard second look. 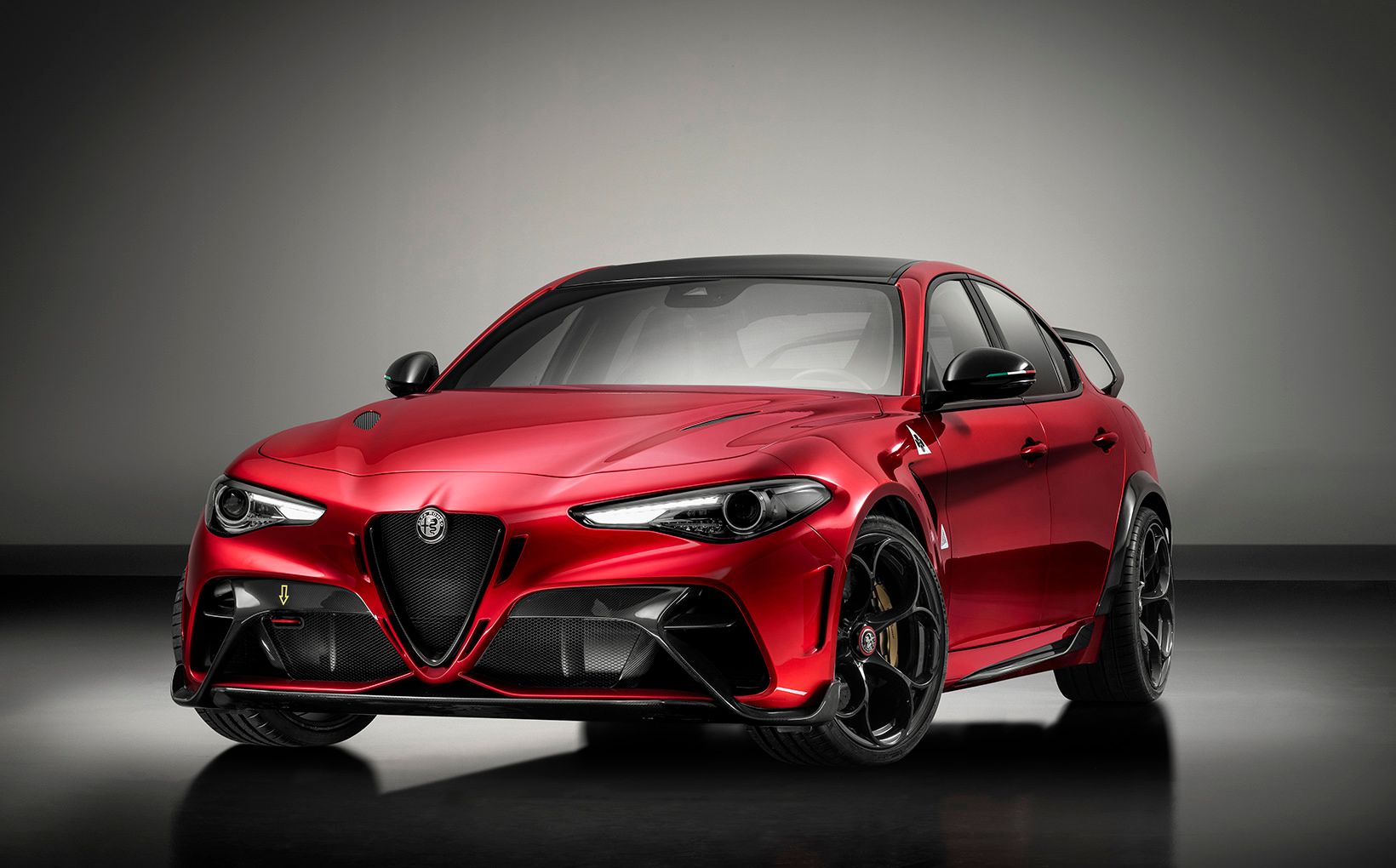 With a 50:50 front-to-rear weight ratio and a 100kg diet, the GTA should be even more dynamically electrifying than the superb Quadrifoglio on which it’s based upon.

Looking at the GTA, with its striking body kit, is certainly hard to miss – but that’s only the beginning.

Like the rear diffuser, roof, bonnet, mirror housings and rear wheelarch extensions, all are finished in carbon-fibre to shed kilos, while a central titanium Akrapovic exhaust helps to further reduce weight. 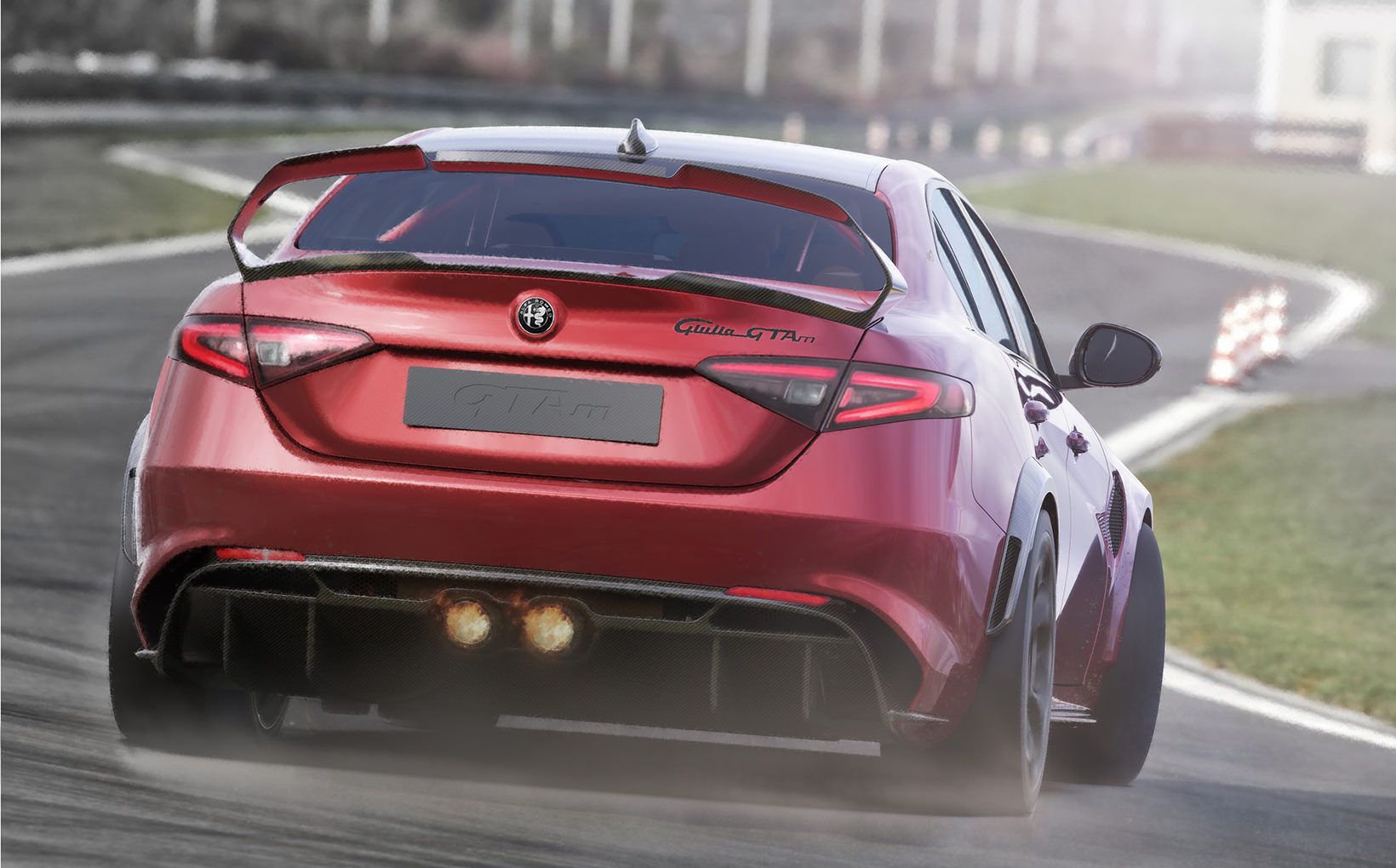 Under the skin, you’ll also find carbon-fibre in the driveshaft, while the engine, doors and suspension components are made from aluminium. The upshot is some 100kg of excess mass has been slashed from the Giulia.

The bold, brash newcomer is based on the current performance flagship Quadrifoglio (QF), but rises above the BMW M3, Mercedes-Benz C63 and Audi RS4 triumvirate by being even more hardcore.

And that’s quite a thing, given that the existing Giulia QF is the closest thing we have to a three-box Ferrari sedan. 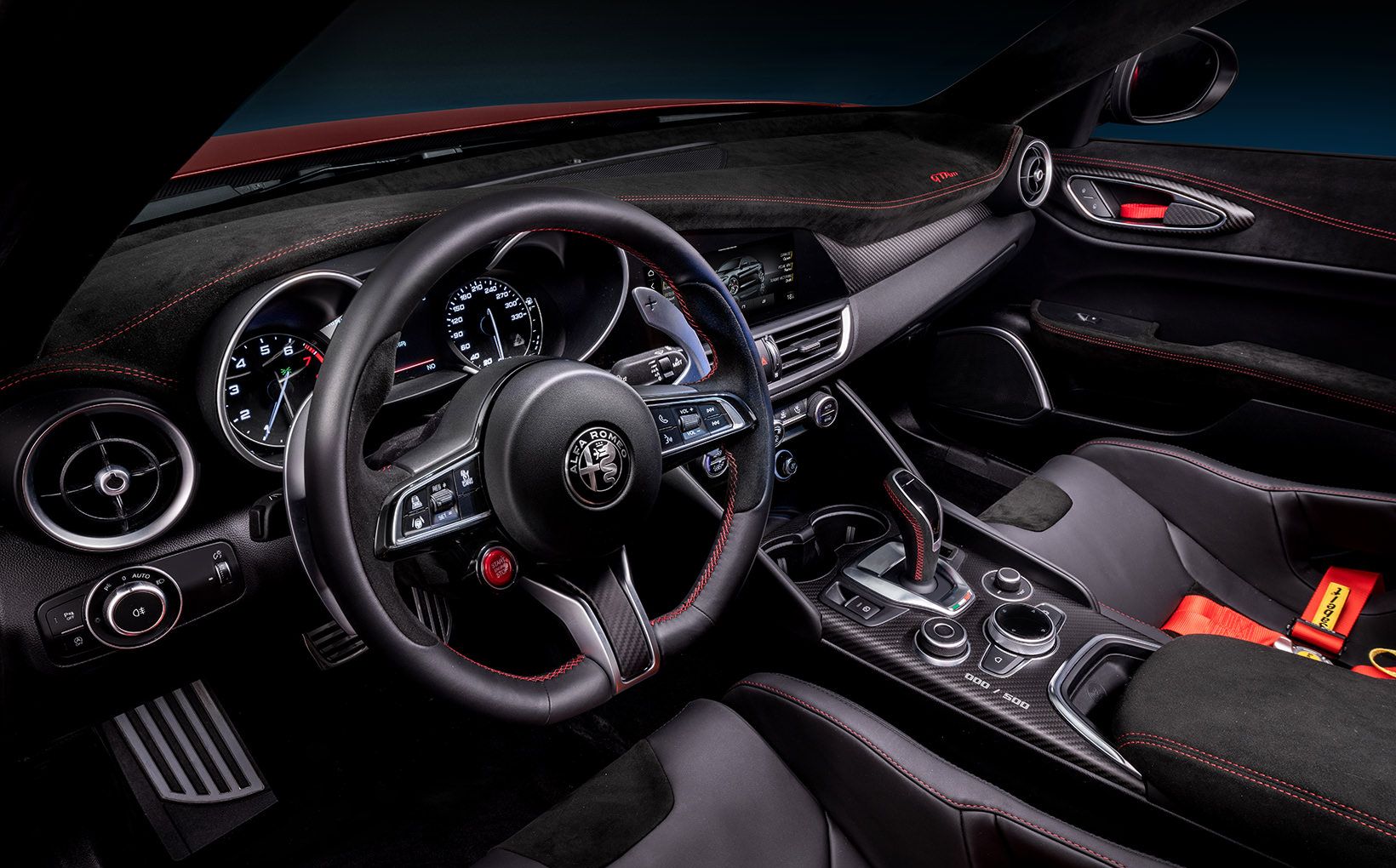 Alcantara swathes most of the interior, though the seats in the two-seater-only GTAm are special racing items with harnesses to strap you in.

Speaking of the Prancing Horse brand, Ferrari had a huge hand in the development of the QF’s 2.9-litre twin-turbo V6, which is one of many reasons why it is so special – and arguably the greatest four-door machine to come out of Italy today.

For the GTA, peak power leaps from 375kW to 403kW, though the maximum torque figure remains steady at a still-very-considerable 600Nm. 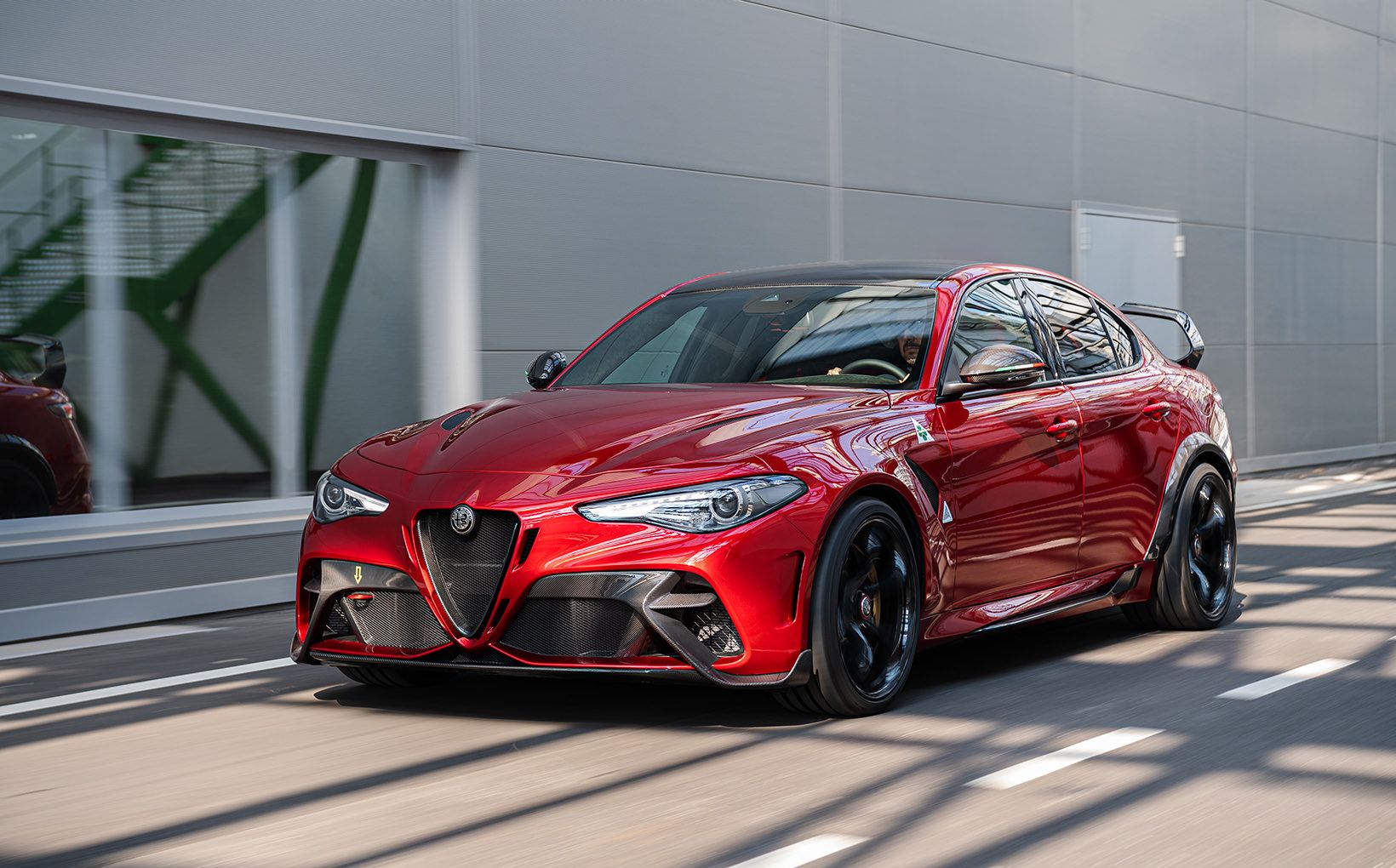 Alfa partnered with Sauber Engineering to develop a unique set of aerodynamic enhancements for the Giulia GTA – useful on the racetrack.

Drive continues to be sent to the rear wheels, via a ZF-supplied eight-speed torque-converter automatic transmission and a torque-vectoring rear differential that can send 100 per cent of torque to either wheel as required.

With sweet memories of the Giulia QF still lingering to this day, we cannot wait to get our hands on the wheel of the GTA.

To help keep the Italian super-sedan in control, Alfa’s engineers have also breathed on to the QF’s already-enhanced chassis, with the front and rear tracks both stretched out by 50mm, new dampers, springs and bushings for the independent suspension system. Doesn’t it just fill out those wheelarches exquisitely! 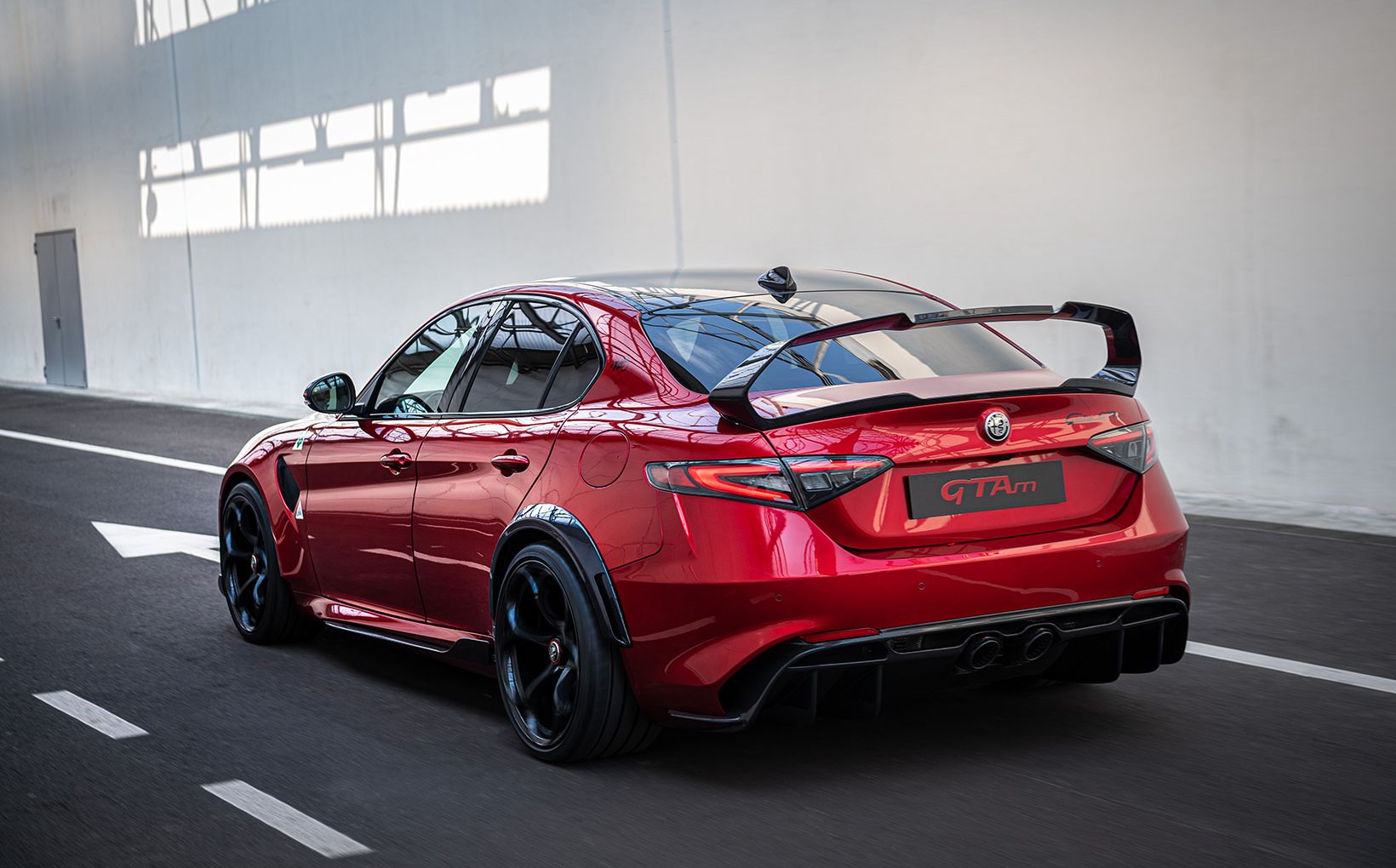 The GTAm’s larger rear wing is specially designed to maximise downforce at speed, though it also helps boost the Giulia’s track cred.

There’s also the rawer GTAm – the track-focused but street-legal version, which introduces an even more aggressive front splitter and towering boot spoiler to shame a Mitsubishi Magna Ralliart’s, as well as polycarbonate resin windows to further cut the kilos.

Controversially, it also ushers in a pair of carbon-fibre racing seats with six-point harnesses up front, as well as a huge roll bar and fire extinguisher behind them… in place of where there used to be a rear bench. Your kids may have to sit this particular version of the Giulia out!

Typical Alfa, Alcantara upholstery finds it way on to the GTA’s dashboard, door panels, glovebox, side pillars and central seat trim, to help justify what we reckon would be a pricetag nearing or even exceeding $200K… given that the QF currently sits at $145,900. 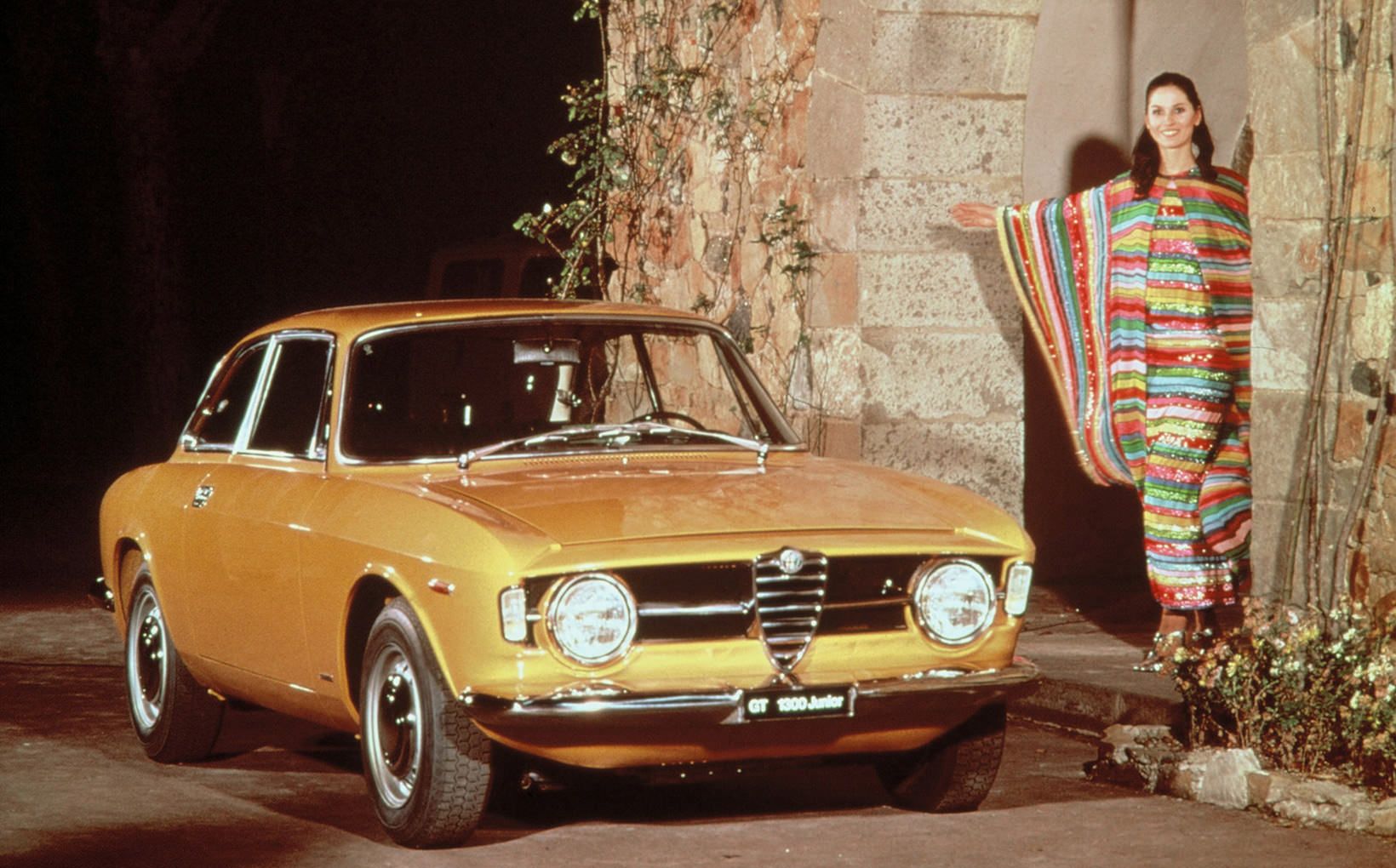 The GTA (for ‘Gran Turismo Alleggerita’) first found its way on a production Alfa in 1965, as part of the timeless 105 Series Giulia range (GT 1300 Junior pictured).

In Europe anyway, customers will receive a one-to-one purchasing process, with a product specialist following each buyer from purchase to delivery. Very VIP.

The GTA, then, is limited to 500 units. Each will be individually numbered and certified to help motivate enthusiasts and collectors. 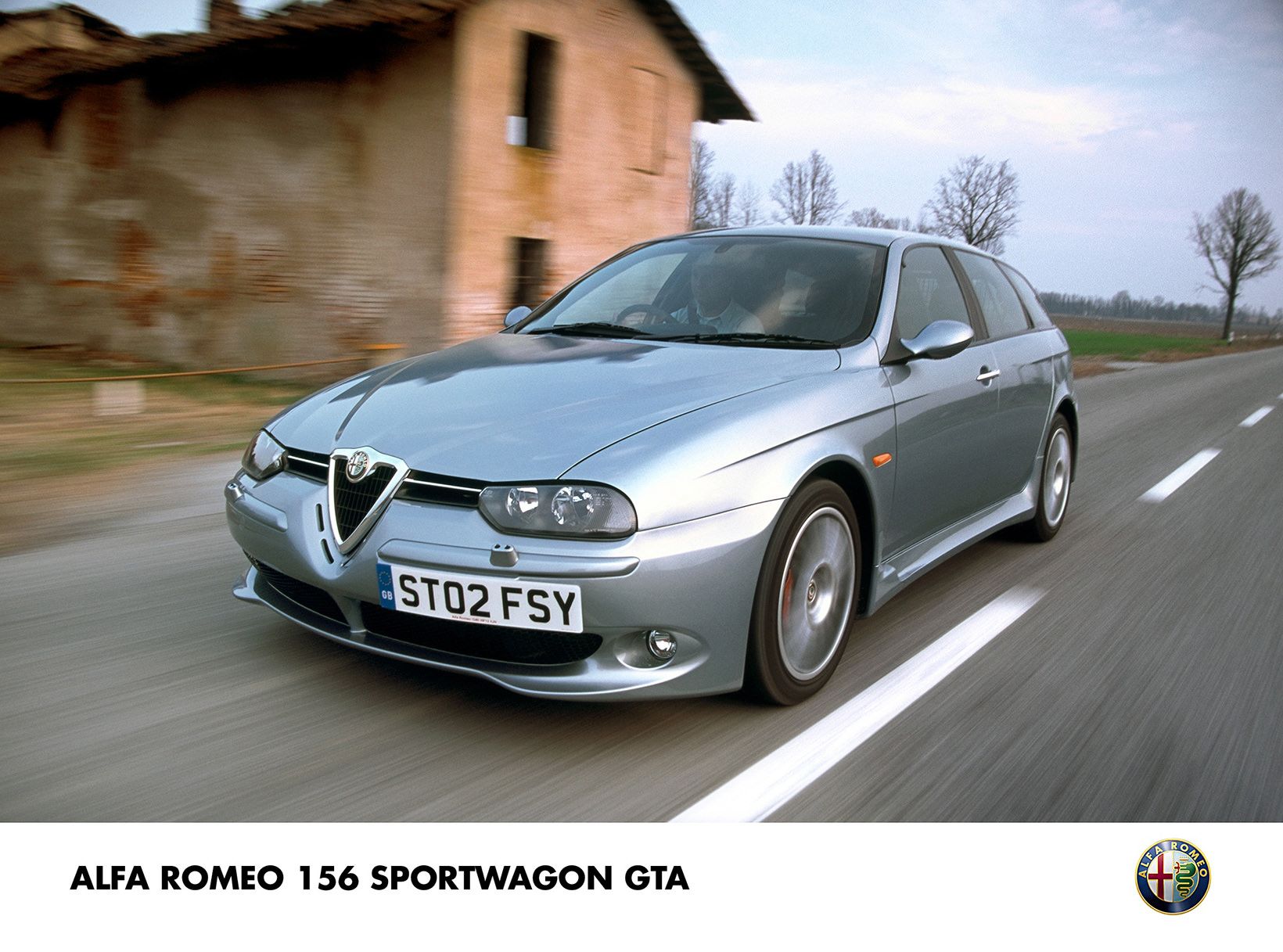 If Australia does miss out, then please remember how truly sublime the standard Giulia QF is anyway.

In any case, happy birthday, Alfa!