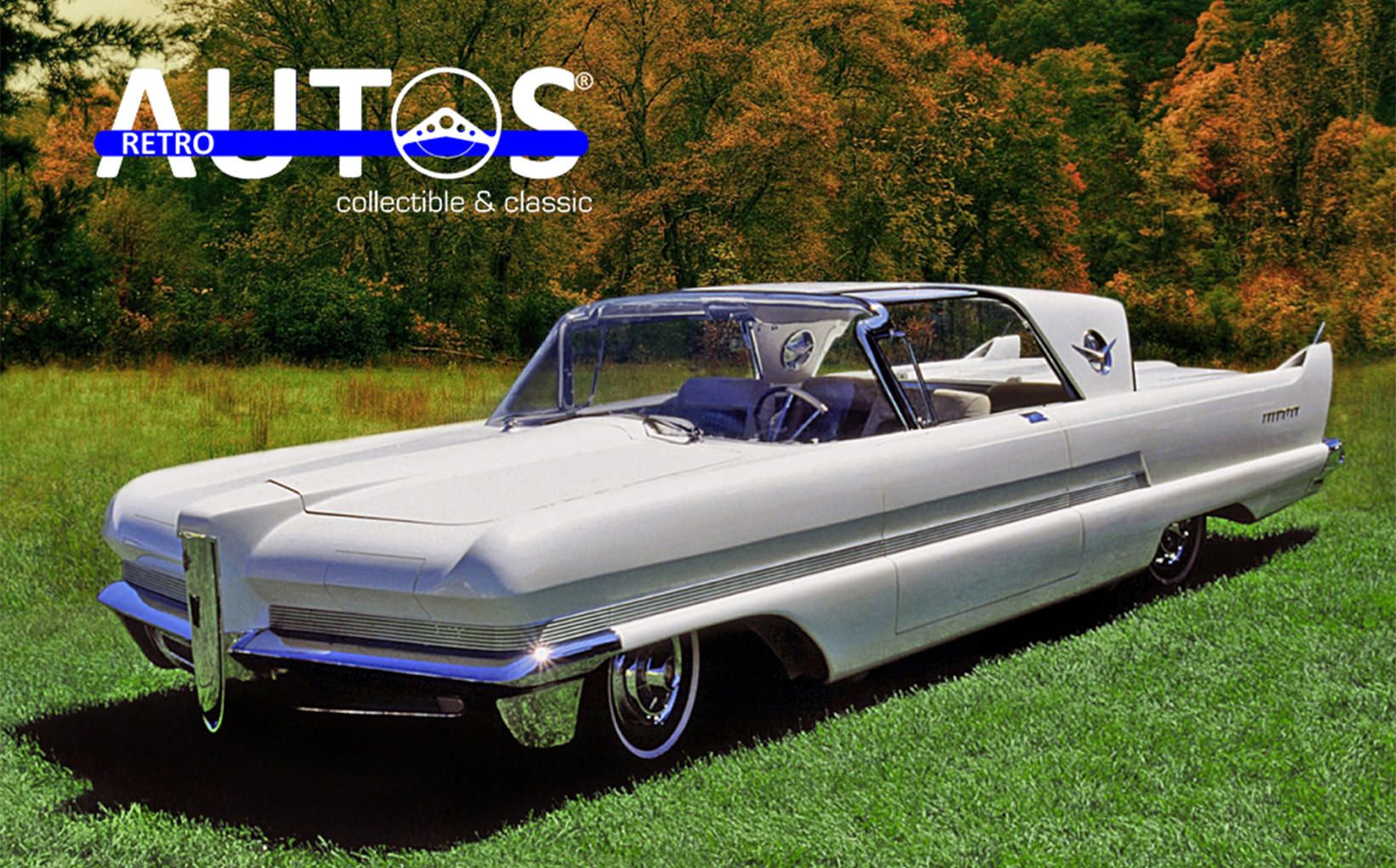 If ever a concept car was ill-timed and wrongly named, then Packard’s 1956 Predictor is it.

The fully operational hardtop coupe was intended to point the way to the future for the luxury American brand.

It was supposed to excite potential buyers and subdue the rapidly growing anxieties, of the company’s dealers and bankers, about the financial wisdom of Packard’s 1954 takeover of the cash strapped Studebaker.

Instead, it heralded the end of the line for “real” Packards.

From 1957 onwards all Packards were badge engineered Studebakers, as the struggling company tried to save money and avoid bankruptcy.

The Predictor made its debut in January 1956 at the Chicago Auto show to great fanfare and acclaim. It was then paraded around the American auto show circuit and Packard-Studebaker dealerships. 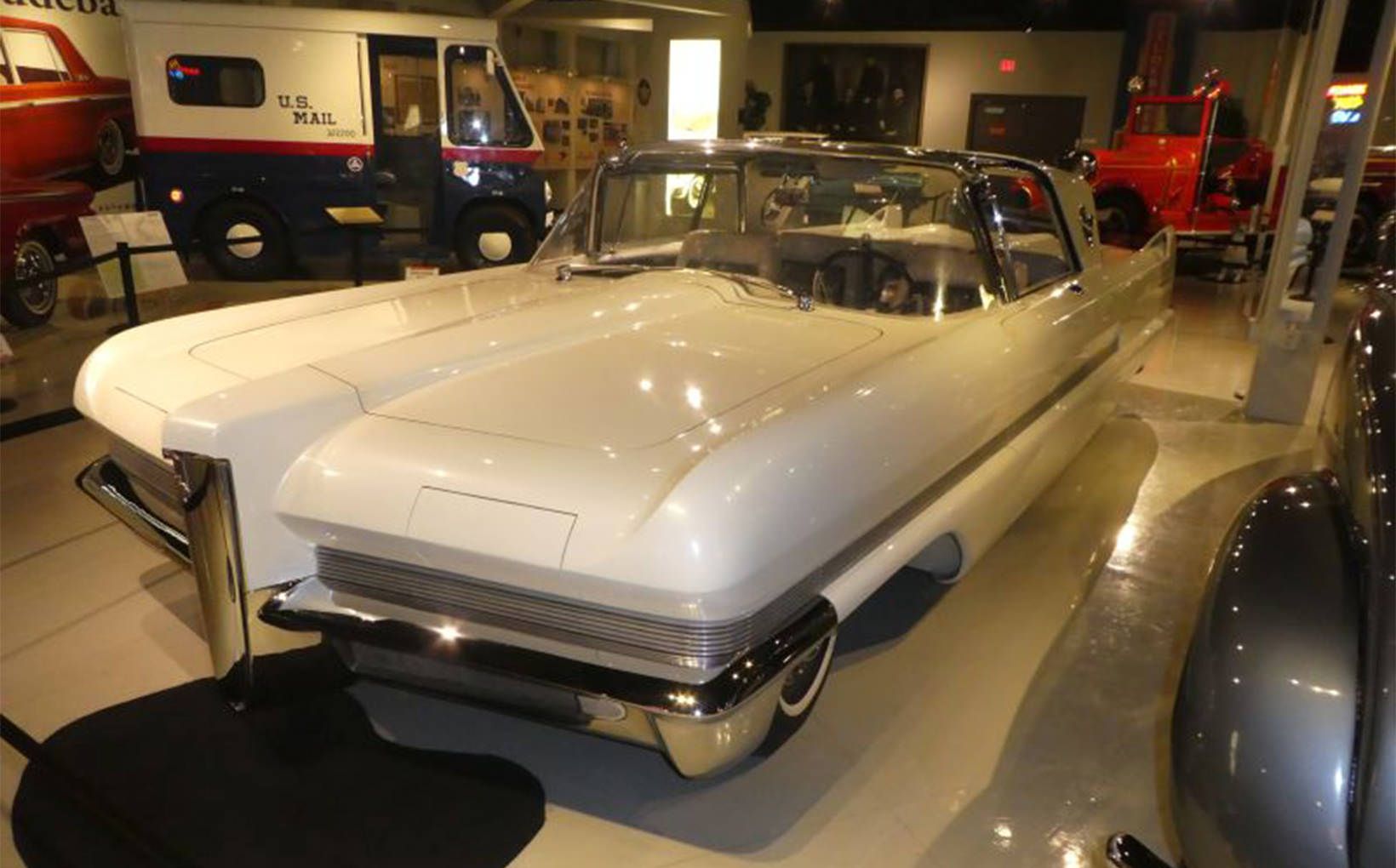 The company’s president, James Nance, and design vice-president, Bill Schmidt, created the idea for the Predictor.

Schmidt already had a famous concept car on his resume. While he was at Ford a couple of years earlier, he had styled the Lincoln Futura, which became the Batmobile. (Here’s the LINK to the Retroautos January 2020 story about the Futura.)

The project was given to Packard’s chief stylist, Richard Teague, who assigned a couple of his team to do the initial work, including Dick Macadam.

The Predictor was originally to be called the Projector, but this was changed just prior to its first appearance. Teague had wanted to call it the “Javelin”, and small-scale models carried this name. He eventually used the descriptor on American Motors’ pony car offering in 1968.

I saw the Predictor at the Studebaker Museum in South Bend Indiana in 2019.

Let me tell you, at 5.6 metres long and 2.15 metres wide it is an imposing automobile in its pearl white paint and chrome accents. 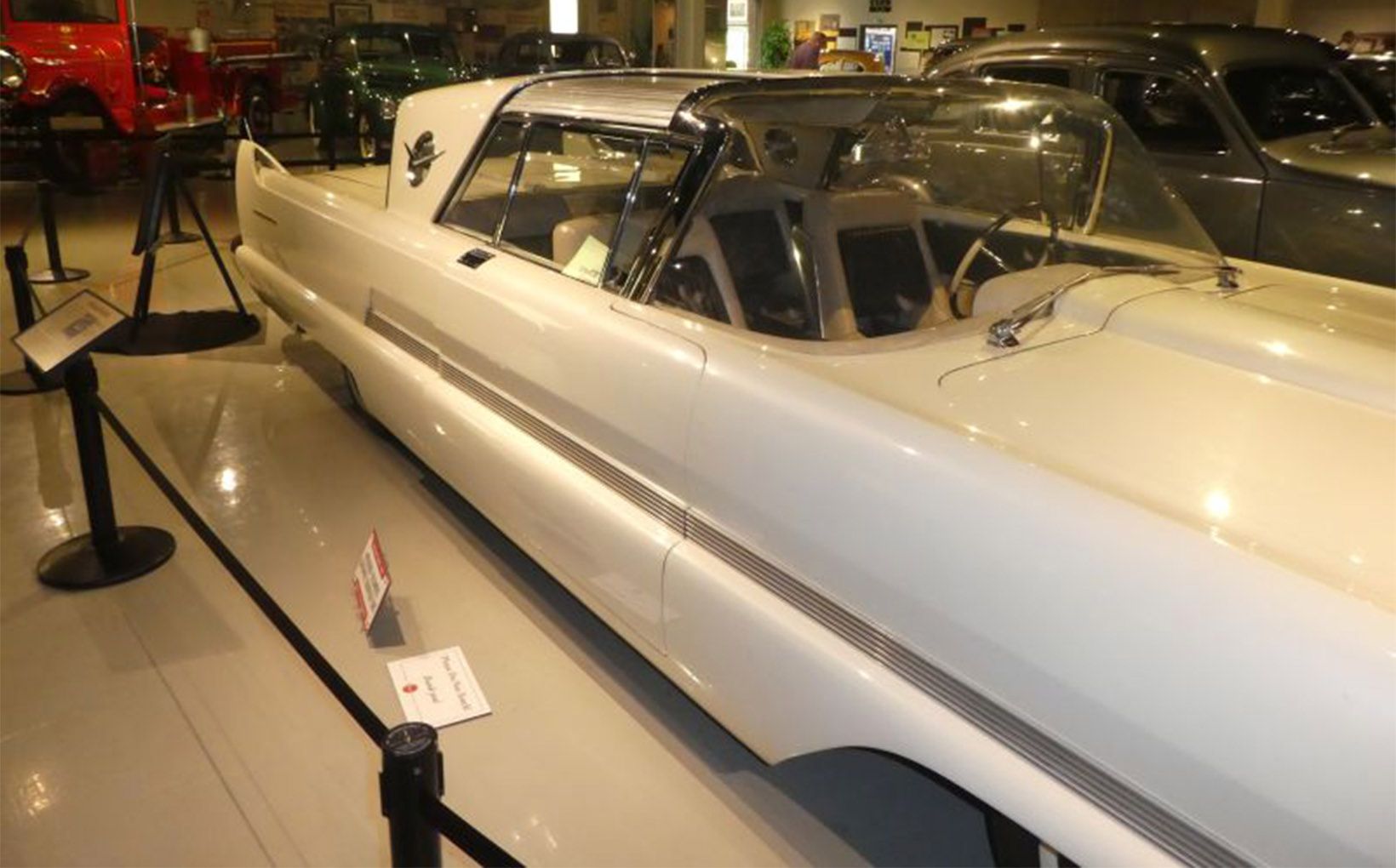 The Predictor is large automobile, even for an American car of the era.

The front end of the Predictor is a variation on Packard’s “ox-yoke” grille, with a decidedly vertical shape. The front end has quite a restrained appearance when compared to the complicated and chrome laden grilles of Packard’s main competitors, Cadillac, Lincoln and Imperial.

Mind you, the front is eerily similar to the “Bunkie” Knudsen inspired grilles of the 1968 Pontiac and 1970 Ford Thunderbird. 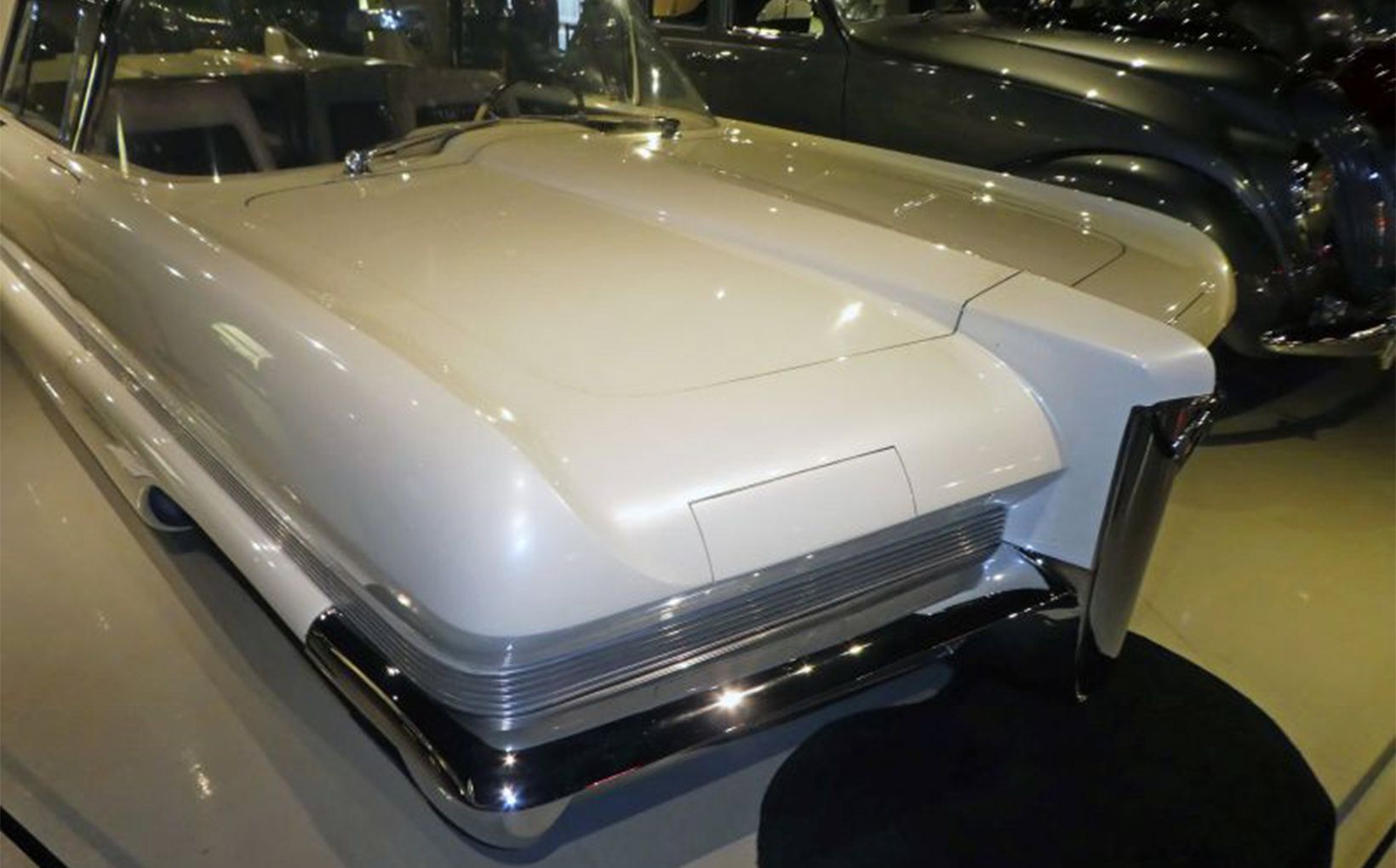 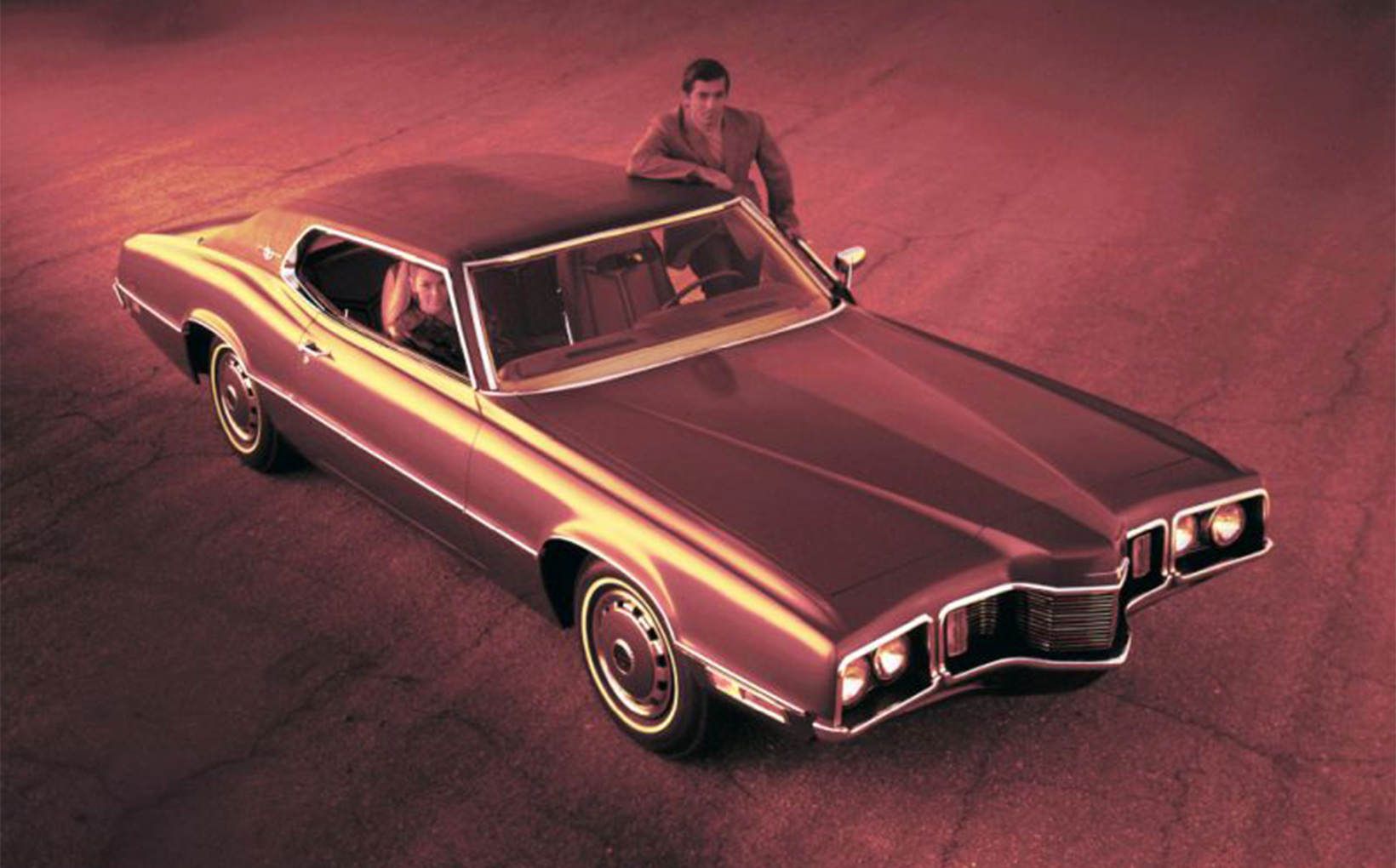 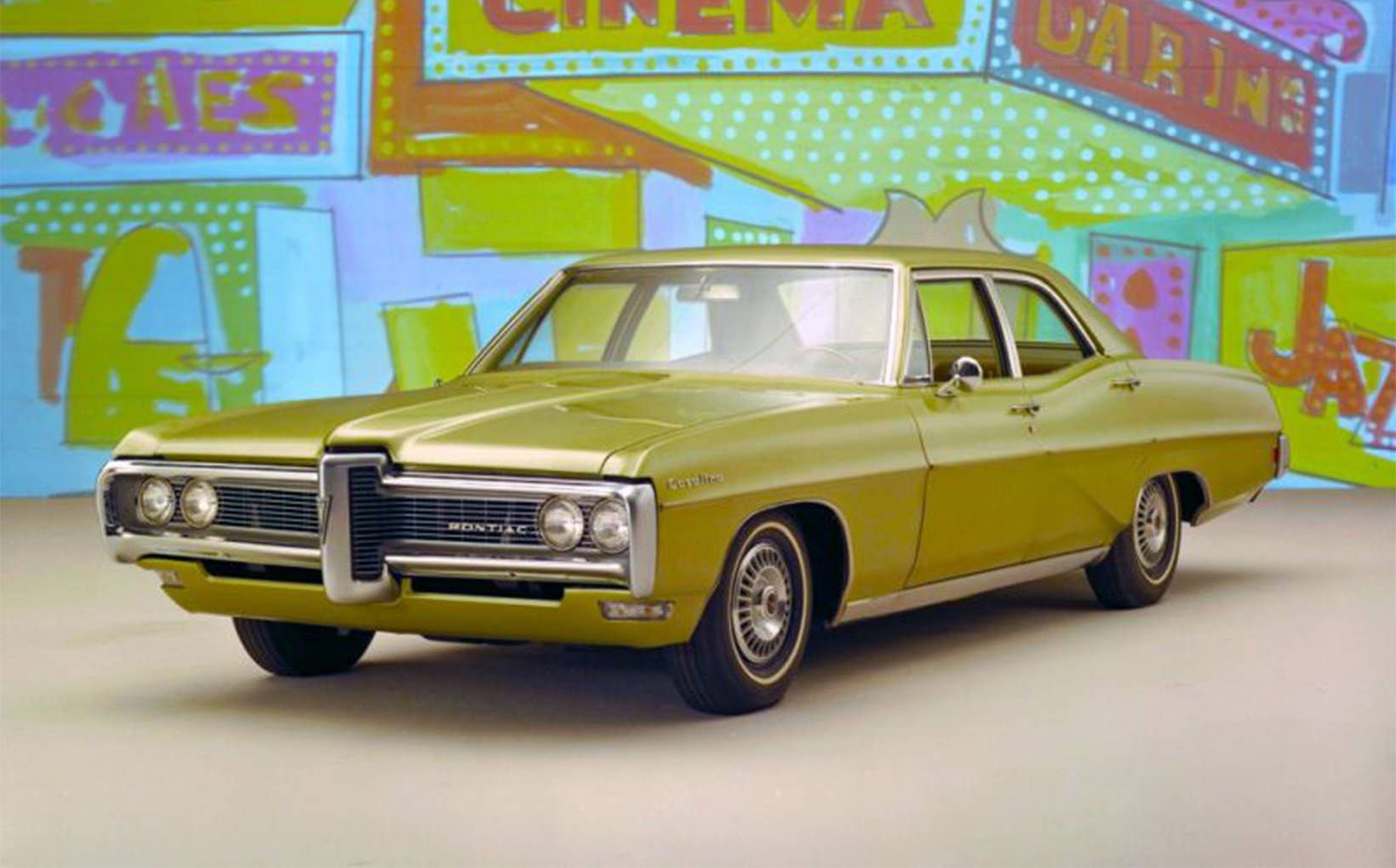 The front end of the Predictor is eerily similar to the 1970 Ford Thunderbird and 1968 Pontiac.

The bonnet has a raised centre section that sweeps back from the grille and flows under the wrap around windscreen to inside the car where it forms part of the dashboard. It is a very striking design feature. 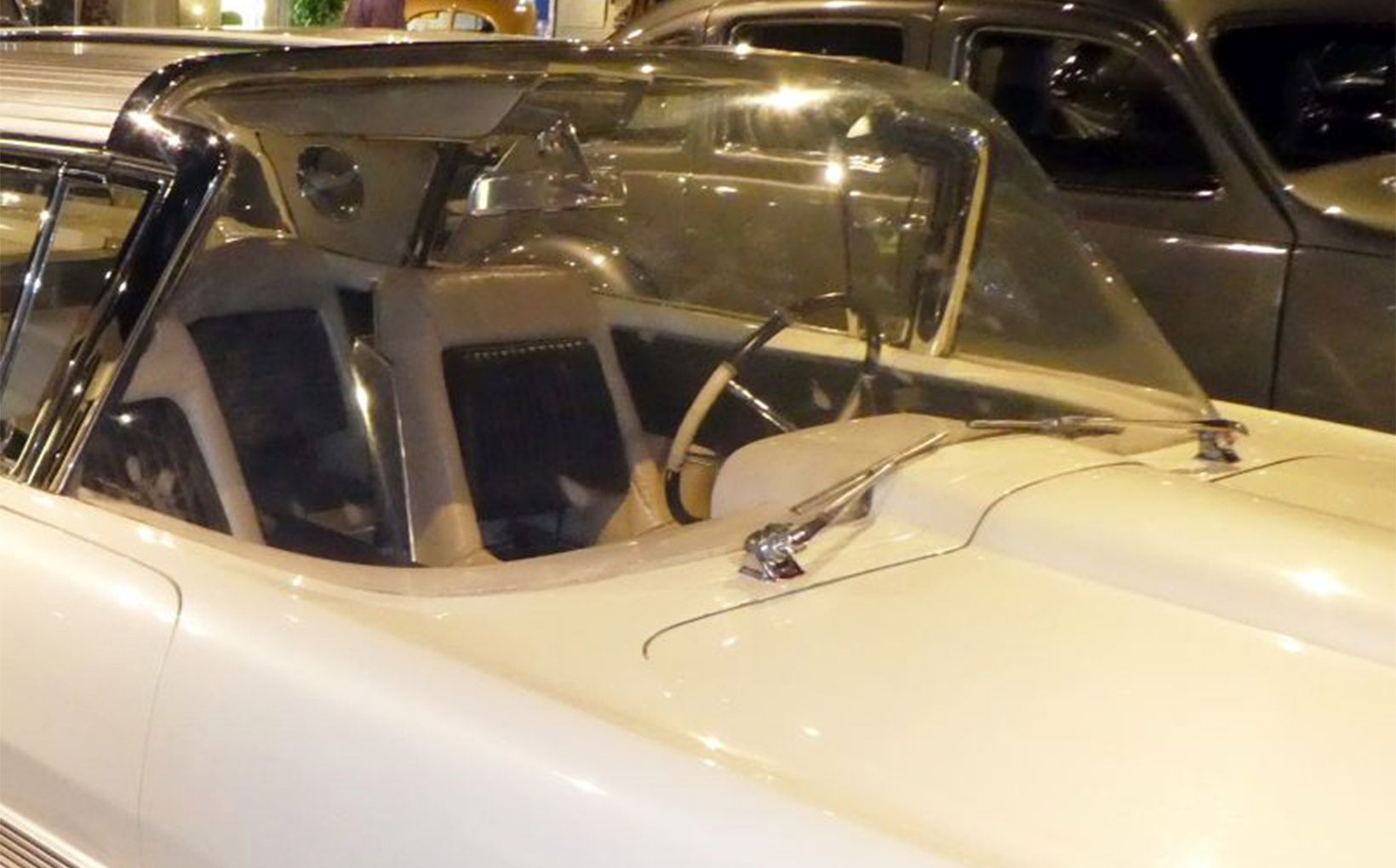 The raised centre section of the bonnet flows under the windscreen and forms part of the dashboard. This is an eye-catching styling idea.

The headlights are hidden behind powered clamshell covers.

At the other end of the car emphatically tall fins, resembling the sails of the Sydney Opera House, rise out of long fenders. The extended bumper bar ends in “jet pods” through which the exhaust pipes exit either side of a reversing light. 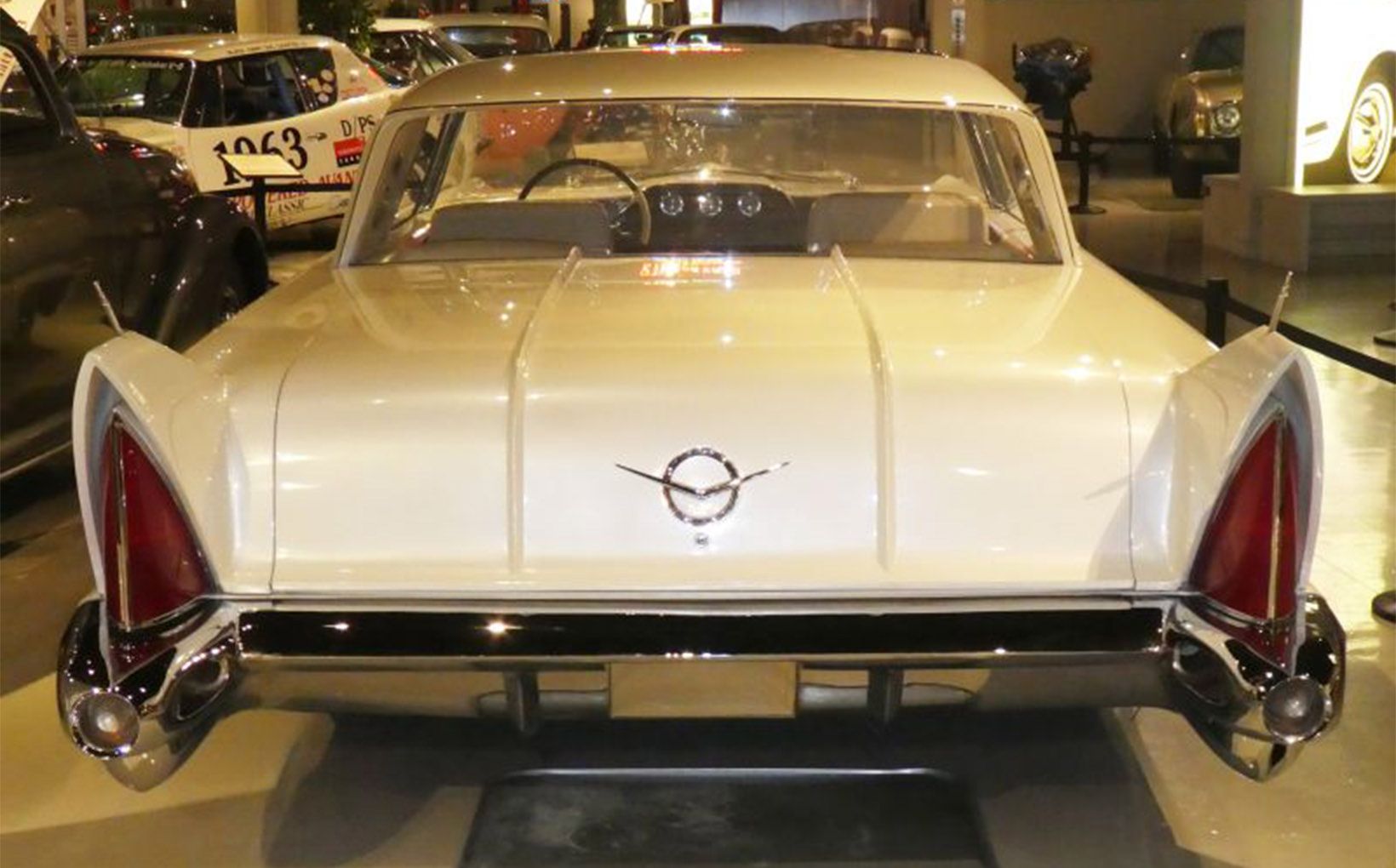 Big fins for a big car. The Predictor did not escape this must-have design theme of the 1950s.

As you can see in the photos the Predictor has portholes on its C pillars, which also appeared on Ford’s Thunderbird. Its reverse slant rear window, which could be electrically raised and lowered, had already been showcased on the 1953 Packard “Balboa” concept car.

The large gold “V” emblem which appears on the boot lid and portholes of the car was Teague’s idea. He wanted to establish a symbol for Packard that matched the three-pointed star of Mercedes-Benz. 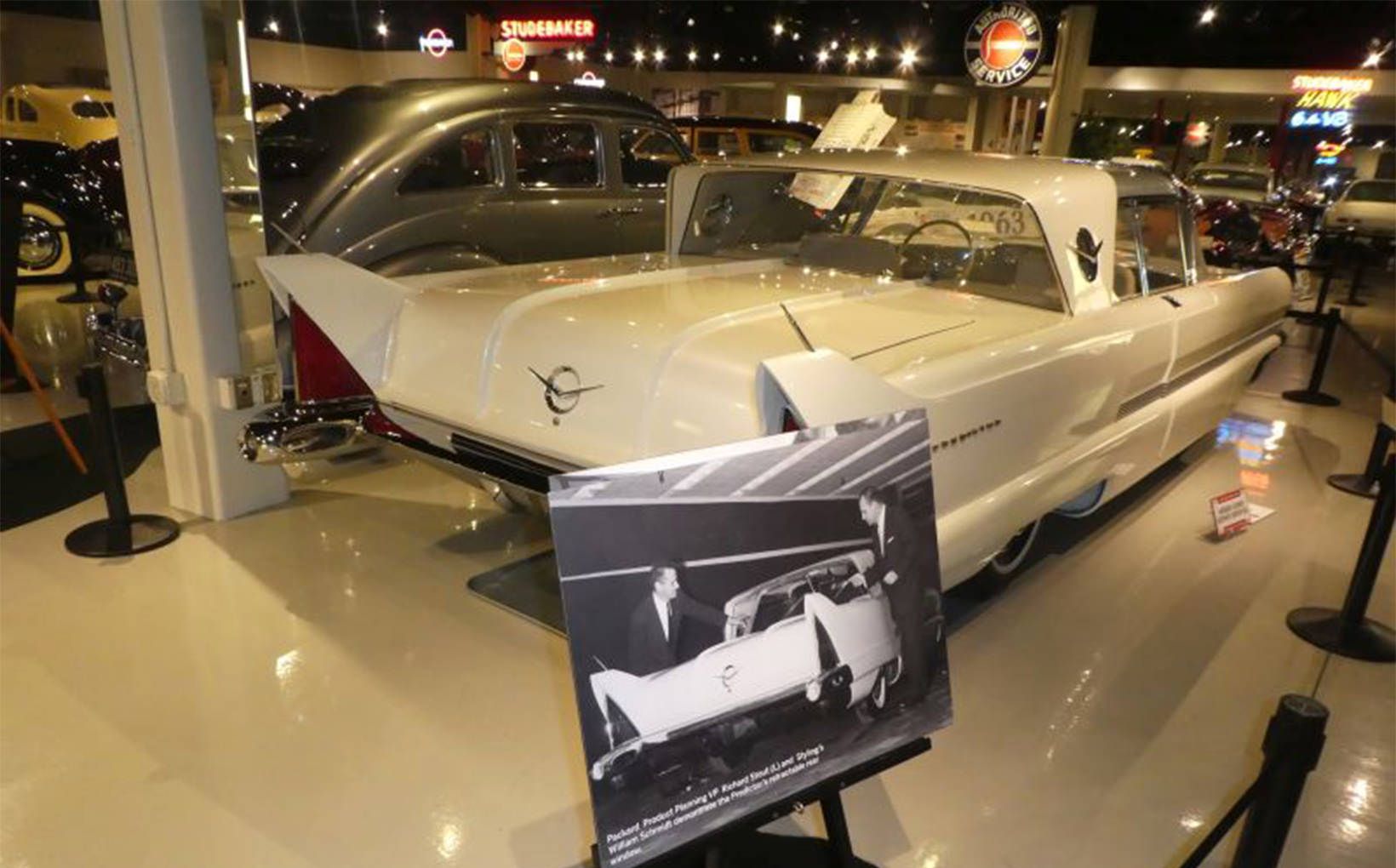 The gold V was an attempt to create an enduring symbol for Packard that matched Mercedes Benz’s three-pointed star.

To ease access to the low-slung car—it is just 1.37 metres high— there are thin metal panels above the doors which slide into the roof when a door is opened or activated by a switch inside the car.

The interior features an aircraft theme. Four bucket seats are separated by a console that houses many of the switches that activated the windows, headlights and roof panels. Other switches were located on an overhead panel, reinforcing the in-flight sensation. 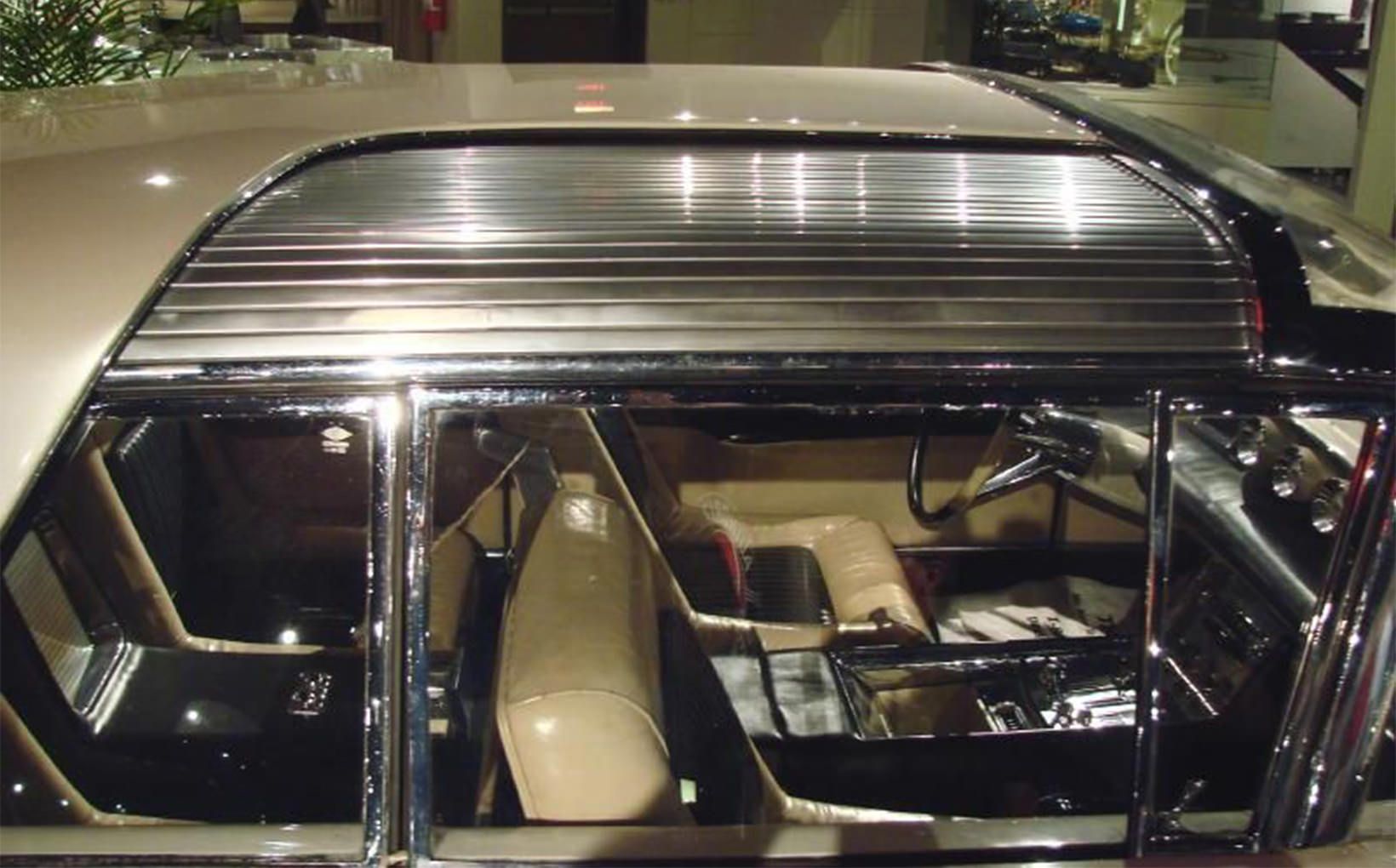 These thin metal panels slide into the roof when the doors are opened to make entry and exit easier.

The seats have reversible covers: leather on one side, fabric on the other. Strangely, the front seats have no fore and aft travel, but they swivel to, supposedly, make it doubly easy to enter and exit. However, contemporary reports complained that the low height, dog leg A pillar and fixed seats made it very difficult to get in and out of the car.

Packard’s 6.1 litre V8 is attached to the company’s self-developed Ultramatic transmission. The gears are selected via push buttons.

Using a standard Packard chassis, the car was constructed by Ghia in Italy in just 90 days. Problem was, they botched the complex electrics and the car almost caught fire after it had been shipped back to the USA. It was re-wired by Creative Industries in Detroit, who were specialist concept car builders for all the major American automotive companies.

The Predictor was supposed to form the basis of a new line-up of Packards and a couple of prototypes were built. But nothing could save the brand from becoming a rebadged Studebaker as financial pressures mounted.

Packard’s Detroit production facilities closed in 1957 and it all moved to South Bend, Indiana, including the Predictor. It was tossed into corner of the factory where it sat for years under a tarpaulin until Studebaker itself stopped producing cars.

It sat around in various warehouses until, in the 1980s, the Studebaker National Museum acquired it and had it restored. That the Predictor survived at all is one of those automotive miracles that occur from time to time. 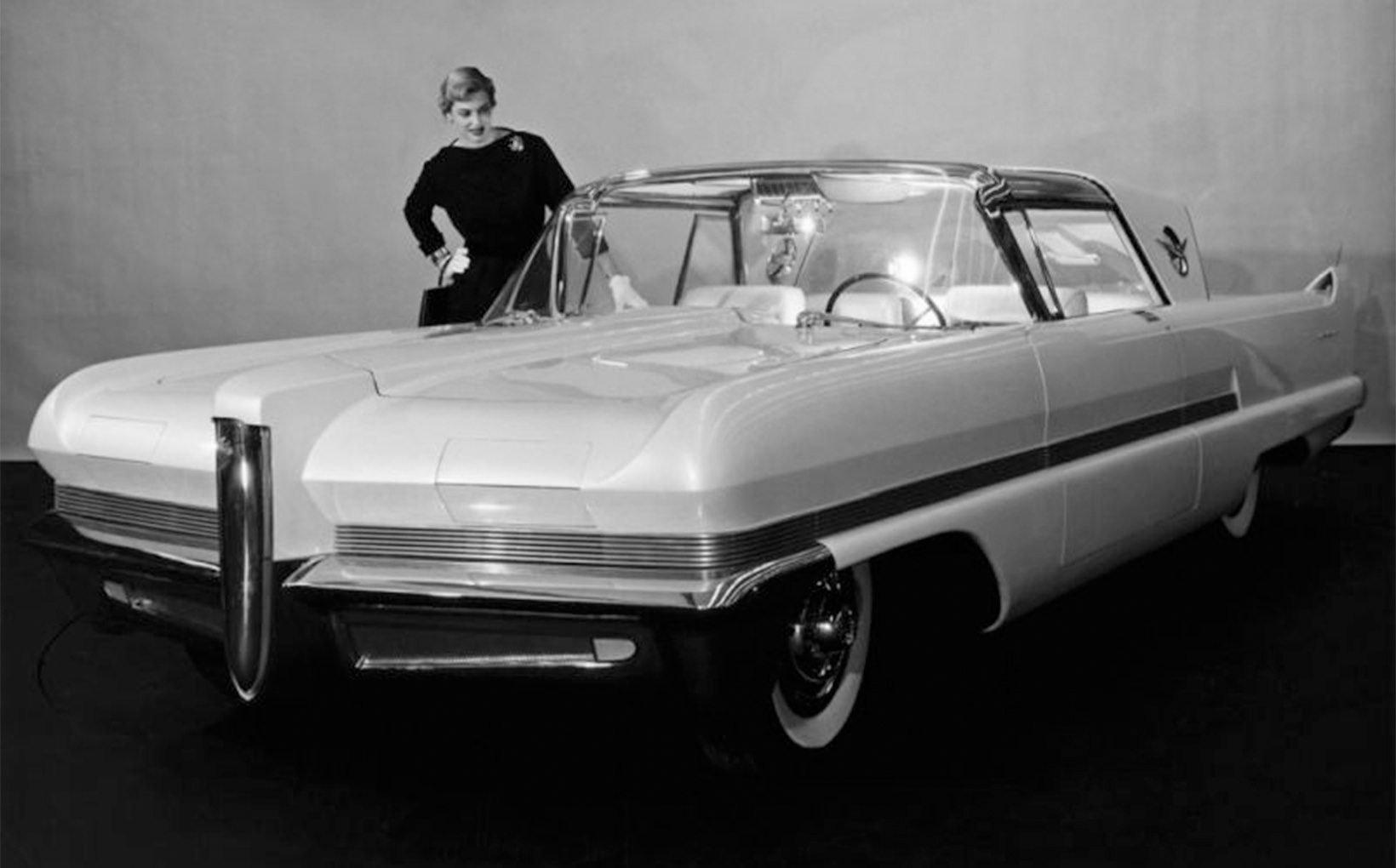 By good fortune or simple fate, the Predictor survived the closure of Packard and Studebaker.

And what of the Predictor’s creators? Well, they could see that the Packard-Studebaker organisation had a limited future.

Schmidt left in late 1956 and went to Chrysler. In 1959 he established a very successful design consultancy. Go to Retroautos September 2019 (LINK) for the story on Schmidt’s eventful time at Chrysler.

Macadam moved to Chrysler in 1957 and took over as its design supremo in 1973 when Elwood Engel retired.

Teague also left Packard-Studebaker in 1957 and headed to American Motors’, via Chrysler, where he was its Design Vice President during the 1960s and 1970s and championed some of the best designs of that era. 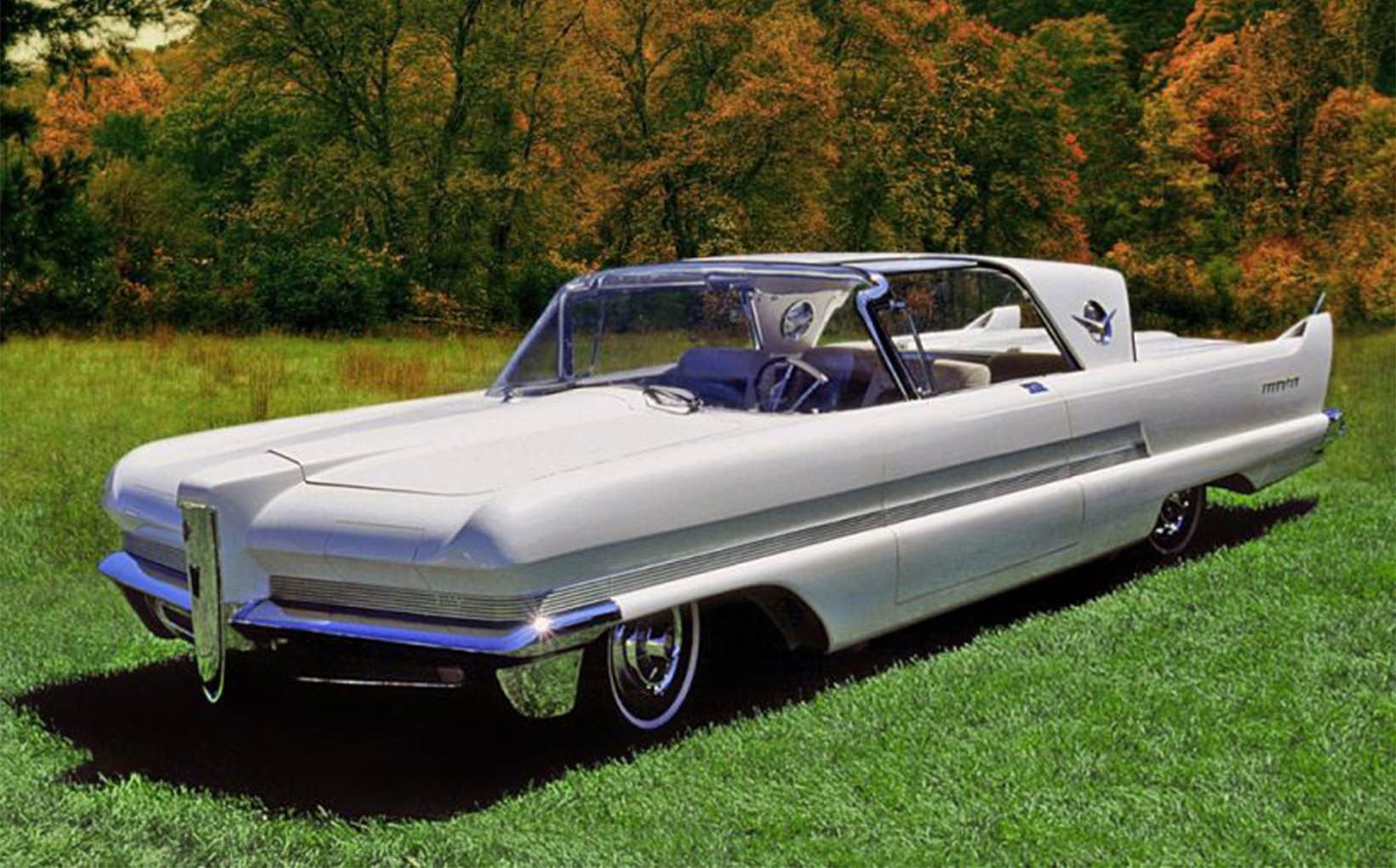 The Predictor is often seen at the major classic car shows around the USA.

Also, in the Packard-Studebaker design studios at the time was Duncan McRae, who would later style the 1959 Studebaker Lark and then move to Ford USA and end up as Ford Australia’s design chief in mid-1969. In Retroautos February 2019 edition (LINK) I revealed the story behind McRea’s development of the 1959 Lark and why it resembles the 1960 Valiant.

Other Packard-Studebaker alumni included the legendary John Z. DeLorean, who was a senior engineer.

James Nance left the company in 1956 and went to Ford to head up the Mercury-Edsel-Lincoln division. He departed Ford 1959 in the wake of the Edsel’s falling sales.

Was it just co-incidence that the Edsel had a Predictor-like upright grille? 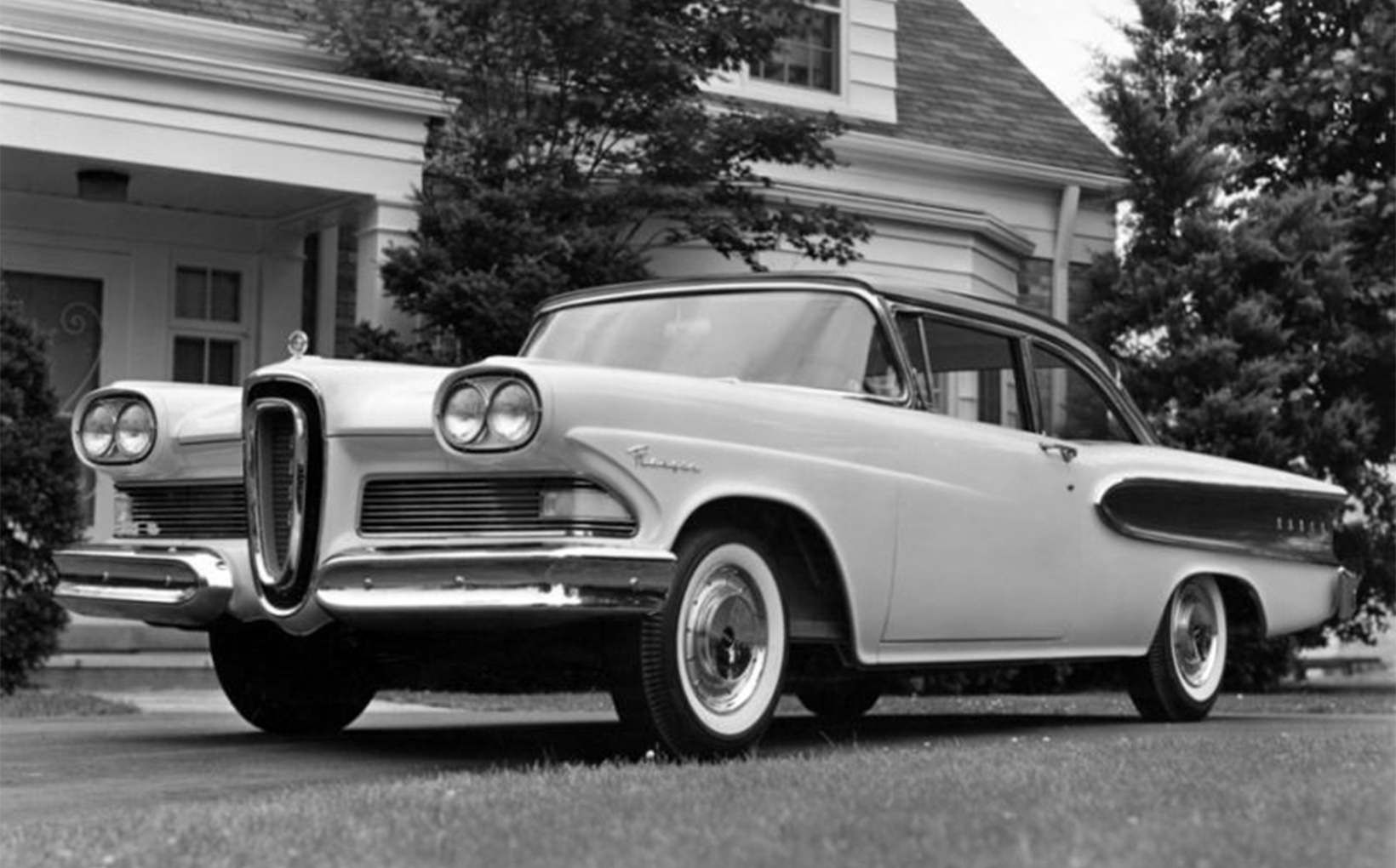 The controversial Edsel front end design has an upright stance similar to the Predictor.