This is my 1951 Sunbeam Talbot MK2 90 MM Special Restoration Blog to keep the history of this vehicle alive.

What was originally left the Rootes Manufacturing Company in the UK was exported to Australia on the 1 November 1951, as an 4 door Gunmetal Grey Saloon, was soon about to be part of Australian Car Racing history.

The vehicle was purchased by Melbourne Restaurant Owner & Racing Car Driver - Lou Molina. A very active and competitive racing identity who was supported by good friend Sil Massola and together set upon building their own race cars.

Australia saw its racing special’s in the 1950’s develop to a degree well beyond most other nations, largely due to shortage of pedigree racing cars and components, being so far away from the epi centre of engineering overseas. And so, the local racer had to improvise and invent in order to be competitive.

Coach builder Brian Burnett, who also built the body of the famous Maybach Racer, assisted Sil Massola with the development of Lou Molina’s first racing car, the MMSpecial, he never used drawings as the entire creative concept took place in his head. Every vehicle he produced was a once off production with no prototype. Over the years they also produced the famous 1957 Monza Holden Racer which featured on movies with Gregory Peck and carried the first Australian Holden Grey Motor that changed the face of Australian Motor Racing.

I purchased this vehicle as part of classic barn find - the last 2 owners had stored this vehicle for over 40 years. It was periodically started and run stationary in almost operational state.

It was a mystery car to start with, it was mistakenly sold as an 1955 Drop Head Coupe with the owner at the time having plans to turn it into a hot rod.

With persistence and research along with help from Sunbeam Talbot Owners Face Book Club the history of the vehicle came to light. 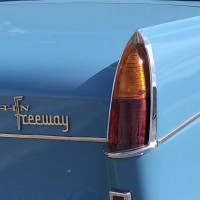