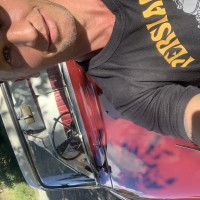 Purchased her in 1998 (I was in the Navy) from Melbourne, and started repairing the rust, drove her to Sydney where she got a new 186/192. Drove back to Victoria where I was posted for 9 months and repairs continued. Put her on blocks while I went to the gulf war, whilst there I projected an image of her onto paper and drew her without the roof and longer doors. I looked at it everyday for 6 months, on return to Australia, I flew to Victoria, got her off the blocks and drove her back to Melbourne from Geelong to get converted, this process took over 18 months, by then I was posted to WA. As I moved frequently the car was made to be legal in every state. I flew to Melbourne, put a new battery in her and drove to Adelaide and trained it back to Perth, then moved back to Qld and shipped her here, since then she’s lived in 8 different houses. Just recently she got twin strombergs and a new accelerator pedal and cable as the linkages broke, now she’s purring again, two years ago I gave a panel beater $3k deposit to start some body repairs, what i got was a car back with yellow overspray, a hole in my new front seat and I had to basically ‘steel’ my car back from the yard, as the panel beater took off with my $.., so trying to save up to get work done to her, so winning some prizes would help get me closer I hope. Hope there are not to many other stories like this re panel beaters! 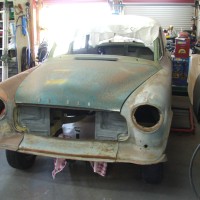