I bought my Brougham in 1997 when I was 21, spotted it at a new car yard where it had been traded in on a new Camry!!!!????
I was told about it and that it was a Premier, not all that interested I took a look and to my utter delight discovered it was a HK Brougham!!
It wore new paint and new Cheviot mags and fresh tyres.......for $1500.
Somebody else had their name down but they couldn't get finance, so when the car yard called me I couldn't get in there fast enough.
The interior was original with factory optioned flip front buckets, T-bar console and Air-con.
The old 307 was a slug driving the Powerglide and 1:2.78 LSD, but it was a cool cruiser and I loved it. It travelled all over Vic., towed the speed boat and a bike trailer, went camping......even slipped and slid through the river clay flats after getting caught in a downpour one easter.....
My Grandfather had one exactly the same as this, colour and spec, only 15 years earlier and I loved it.....sadly that car was sold to a local yob and was slowly destroyed, ending in a rollover.......
Sadly after taking the Brougham off the road 6 years ago to swap the diff and do some repair work it has not been registered since.....other projects have popped up, but I will get back to my baby one day, she's too cool.

Swapped the 307 for a mild 400SBC in 2005.....woohoo, what a difference that made :) Except the old LSD didn't like it and spat the dummy so I fitted a VR commodore BTR LSD with 1:3.55 gears. Tyres don't stand a chance any more.
Also added a console tacho and full instrument 120mph dash. 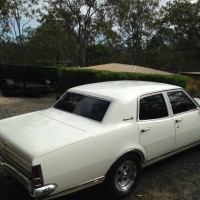