My Dad bought this truck in October 2014 from a bloke in Wentworth.
Originally a Buronga NSW Rural Fire Service truck, this old girl has only travelled a little over 5000 miles original!! It was fitted with a large water tank and pump gear for fighting bushfires and was retired after a decade of use I believe.
It was then donated to the Wentworth SES to be refitted with the appropriate storage cabinets but only went as far as having the original fire fighting equipment removed as the SES went down a different route. Because of this, the Austin sat unused in the Wentworth yard for many years before being bought by a Wentworth resident in the eighties with a view to turning the Austin into a touring camper.
His plans also were not achieved and the Austin sat untouched in his back yard in Wentworth for a decade and then some.....

Come October 2014 and the Austin was for sale on facebook, half heartedly bid on and duly accepted.......the wife wanted it gone!!

2017 update:
Two and a half years later the Austin has been given a lot of love. Brakes completely checked over and freshened, stainless cylinder liners, new diaphragm etc., new tyres and some reupholstering. A new hurdle and low drop sides have also been fitted along with a canopy frame and some wiring upgrades.
The motor is beautiful, runs so smoothly all you can hear is the air being sucked through the oil bath air cleaner when it is running and the gearbox feels tight, like a new one.

Now, all of this has been done for a great reason. No museum for this old girl!!
My dad is currently on a four week expedition with his cousin who is piloting a 1924 Model T Ute, starting from Red Cliffs, Vic. they are heading North to Birdsville via Cameron's corner and Innamincka. As I write this on 3rd of May 2017 they are heading West from Tibooburra to Cameron's corner to arrive on Friday.
After reaching Birdsville they will be heading back south via Maree, Burra and Renmark, then back home to Red Cliffs. EPIC !!!

September 2018:
Dad and I just used the Austin as a transporter for our Morris 8 Sedan to attend the 2018 Bay to Birdwood. The little Morris just fit on the tray, with some modifications to the wheel arches and some new aluminium ramps to make it work. 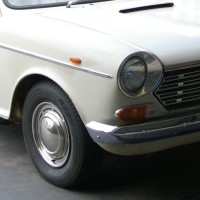