The only history we know is from the previous owner, a friend of my Dad's. He bought the truck in Orange as a young guy in the 70's. He was at an auction and had bought a heap of furniture for himself then wondered how he would get it all home.......until the Kb-3 went up for auction.
The truck went cheap and got loaded up and taken home.
Some time after, with new wife on board, the KB-3 was used for the honeymoon trip to Tasmania where it was tootled around the island and brought them home safely again.
Soon thereafter the family relocated to the Sunraysia area and the truck has been in constant registration the whole time, gaining a Vic reg plate at some point in time.
My Dad has had this truck for a few months now and we have both enjoyed driving it around, being used to cart garden rubbish and taken into town just for the hell of it.
The truck recently sat beside our 54 Ford Skyliner at the local 2012 Sunassist car show in Mildura, and it was amazing and funny to see how many people walked straight past the nice shiny cars to get to the old truck!!

The crash box has been an education learning how to change smoothly, but smooth downshifts still elude me......and the flat 6 motor is grunty enough down low but 80 km/h is when it says no more. In fact you find yourself driving around like a grandpa on Sunday in this truck........what's the hurry?

Future plans for the truck are to fix up the tray so it doesn't shake and rattle, maybe replace the boards and re-fit the tailgate and we have just found the original hand turn signal hiding behind and under the seat, so that will be going back on too.
A second brake/tail light will also be fitted, found one the same at the Bendigo Swap last year.

In case anyone is wondering, the flathead 25 kVa Ford V8 powered generator on the back of the truck is a WW2 unit built to power spotlights in Darwin. It saw service and was sold off afterwards making its way to Red Cliffs where it ran the local open air theater. My Dad remembers going when he was a kid and was chuffed to bring a piece of local history home again.
After its theater duties, the unit was sent to the S.A. outback where it was used to run equipment while the owners house was being built and continued service connected to the house until power was brought to the area some time after.
The unit was then bought by a man in Lobethal, S.A. He gave the whole thing a birthday, painted it in industrial grey and used it for a while until we bought it two years ago.
Makes for a cool period piece on the back of the truck. 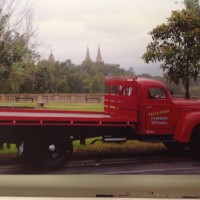 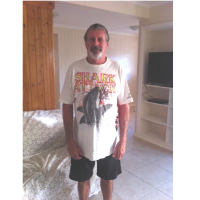