This Ford Blitz crane was purchased by my Dad some time in the 2000’s (can’t remember what year exactly) from a fellow grape grower in Cardross. The previous owner had supposedly rebuilt the motor a few years before, then only used it for another season or two before retiring it (parking it under a big tree).
It had been used to load wine bins onto semi’s during harvest.

My Dad heard about the crane and was really only interested in it for the rebuilt flathead ford V8 in it, with the view of putting it in his 35 Ford sedan that is still waiting restoration........ But after having a drive and a play we realised it’s actually a pretty handy thing to have and it has certainly grown on us.
The V8 is healthy and provides plenty of power and the cable operated crane is in good order and has been used plenty of times. Most recently it was used to load our WWII flathead powered power unit onto the 52 Ford truck for the local inaugural TRACS show in Mildura.

Previous to its life in the Sunraysia region, this crane (obviously) came from Adelaide as the "Churchill’s of Parafield" signage on the crane indicates.
A search for this business name has resulted in no information so if there is anybody out there that can shed some light on the business that would be greatly appreciated.
The truck has 70’s era Victorian plates on it still, as well as its earlier and original 6 digit South Australian plate on the front. 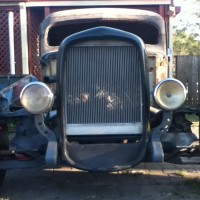