Sold in South Eastern South Australia or Western Victoria. Recovered from McDonald's sawmill yard in Mount Gambier in the 1960's as spare parts for a 510 in Adelaide. Subsequently purchased for $25 in 1969 and restored. The original front axle and wheels were recovered in the 1970's from the sawmill property, but the diff assembly had already been buried. Approx 430 of these sports versions of the standard touring car were made, but only about 15 are known to have survived. 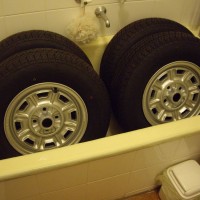