Austin 7 Special 1937
I bought my first car in 1958 from a bloke who built it in his backyard. I was a student at the time, and it cost £58 ($116) earned from holiday jobs. It was an Austin 7 two-seater sports (ha ha ha) 'special'. Although I have labelled it a 1937 model, it was both a bit more and a bit less than that, having a 1928 radiator, crankcase and block with 1.125 inch 'bent-wire' crankshaft, 3-speed synchro-less gearbox, magneto (converted to distributor) ignition, a 1937 chassis, wheels, brakes, cylinder head, manifold, carby (side-draft Zenith, the 1928 model being up-draft) and 1958 external exhaust system (along the passenger side – careful!) and front cycle guards. Weather protection included a folding top of indeterminate age and origin, and a hand-operated windscreen wiper.

It was a fun car to drive*. However the fact of it having no doors meant that passengers had to be of the semi-athletic type and wearing trousers to access the seating. This eliminated most women, something that never ocurred to me prior to purchase. The roof made access so difficult that it was fitted only when absolutely necessary. The gearbox was great for clutch-less changes, as the straight-cut gears allowed them to be simply slid across from one ratio to the next. That's why it was called a 'crash' gearbox. That and the noise!

When turning at speed, the weight-shift caused the outer rear quarter-elliptic springs to flatten and lengthen and the inner ones to shorten, the resultant rear-wheel steering sometimes causing an involuntary ground-loop. Fortunately this caused few problems, there being far fewer cars on the roads in those days. On one occasion, the clutch pedal unscrewed and fell through the hole in the floor onto the road. Fortunately the gearbox allowed the car to be slipped into neutral and brought to a halt, allowing the pedal to be retrieved and replaced.

Sensibly, it was supplemented with a 1935 Austin 7 Ruby saloon some three years later.

* Not when wet, due to no side curtains, poor roof fit, hand-cranked wiper and spray from the front wheels. 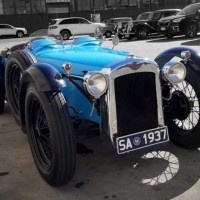