The idea of producing a special racing model was perhaps a natural progression once the Black Shadow had evolved from the Rapide. In what was a very big year for Vincent HRD, the Earl’s Court Show, which had disappeared in 1938, was rescheduled and received enormous support from the British and European manufacturers. Vincent chose to launch its new Series C models with the company’s own Girdraulic forks and hydraulic rear damper, the new single cylinder Comet, and the exciting Black Lightning. Details of the latter were kept secret until just before the show in November, mainly due to the fact that the machine had yet to be built! The Lightning caused a sensation at the show, despite its whopping 400 GBP (plus the home tax of 108 GBP) price tag. From this point on, we are into the mystic subject of just how many genuine Black Lightnings were produced, where and to whom they were sold, what happened to them, and where the survivors are now. Arguments rage interminably, and there is no doubt that the real figures have been polluted with replicas and rebirths, complicated by the use of Lightning engines in racing cars, false number stamping, and the appetite for engines in speedway and road racing outfits. Nothing polarises opinion amongst Vincent buffs like the Lightning numbers, but it is generally thought that 30 complete machines were built, plus several engines. The first two ’Lightningised’ engines for Surtees, and Brown’s ’Gunga Din’ were numbered F10AB/1A/70 and F10AB/1A/71 respectively, and the special Shadow sold to John Edgar in July 1948 was F10AB/1B/900. Subsequent Lightning’s all carried the ’IC’ middle number, and the third of these to leave the factory, F10AB/IC/1803, was sent to Sydney in March 1949 and purchased by champion sidecar racer Les Warton. In the four years 1949-1952 beginning with Warton’s machine, which varied from what was to become accepted Lightning specification by having standard pressed steel brake drums and HRD crankcases, six complete bikes plus one engine came to Australia. These were sold via agents such as Sven Kallin in Adelaide or Jack Carruthers in Sydney, and two more were privately imported, one such being South Australian Gordon Benny’s bike, which he found in Singapore. John Penn’s proposed record breaker was privately imported but carried no engine number. 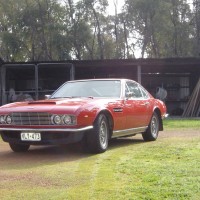 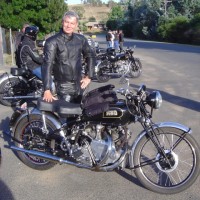