When I was 18 I had a Landau I was going to do up but it didn’t happen and I ended up parting it out 20 years later I seen a Landau that had been sitting in a driveway not moved in years so I knocked on the door to see if they would sell it. Turned out to be the same people I sold parts out of my original one to it must have been fate, after some negotiations they handed me the keys and it was mine, next 2 year was spent rebuilding it into the beautiful machine it is today. 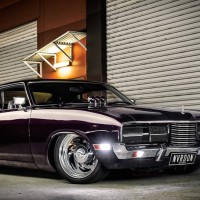