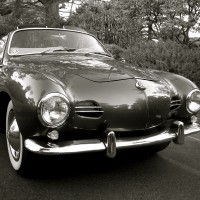 In 2002, I bought a 1961 Karmann Ghia coupe. I decided to dismantle it in order to restore it in the appropriate manner. It was at this stage whilst I was researching as much information on Karmann Ghia on the website that I stumbled across a reference to Karmann Ghia Company of Australia (www.karmannghia.com.au). The proprietor of this company is Jerry Heldt, who I am proud to say has now become a good friend. Jerry was more than liberal with his knowledge on Karmann Ghias and I found him to be easy to talk to and always helpful. After discovering that his reproduction parts were second to none world wide, I realised that it would make more sense to get Jerry to restore my vehicle.

The vehicle required a lot of work. It was mainly just the body with some metal missing and some rust. It had incorrect floor pan, no motor, no gearbox, no interior, no glass and no hood mechanism.

After purchasing the vehicle in February 2004, I sent the body to Perth to be restored by Jerry Heldt. Although Jerry and his staff repaired, restored and rebuilt the vehicle, I researched worldwide for parts and correct detail information to help Jerry in the restoration process.

The restoration process took approximately 3 years to complete, in which time I visited Jerry in Perth twice. The first time being also the first time I met Jerry in person. The restored car was returned to me in Adelaide in early 2007.

According to the vehicles birth certificate issued by Volkswagen Stiftung AutoMuseum in Germany, my Karmann Ghia was built in 1958, model number 141, 30 bhp 1.2 litre, the original color was L431 Bernina and was exported to San Francisco USA. The car has been restored to the original specifications except for the color which I chose L428 , metallic graphite silver which was an original 1958 Karman Ghia color. Some of the original (and often difficult to source) features on the vehicle are the Firestone white wall crossply tyres; 1958 Sapphire 1 Bendix Radio; correct steering wheel and horn ring; original optional tacho and owners manual.

During the restoration process I have gained a lot of knowledge on early "low light" Karmann Ghia's. The restoration process was a true collaborative effort to the point where I was able to help Jerry reproduce correct early convertible door glass, chrome hood trim, and Lack Kontrol stickers etc. My 1958 Karmann Ghia Cabriolet is recognised worldwide as one of the finest example of that model. Although it is my vehicle full praise must go to Jerry Heldt at Karmann Ghia Company of Australia. Also Kevin Ferguson at Trimtec Restoration Co, for his great work in upholstery and trimming work and my good friend Tony Barnett for his encouragement and attention to detail in the area of graphics in relation to the reproduction of factory stickers, signs and artwork for the Sekurit logos on the glass.