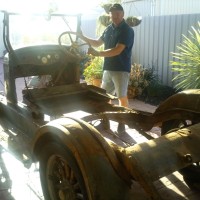 Car 110-375 was purchased new as a “tourer” by Gallipoli & Western Front veteran Alexander Chapman Walder (shown behind the wheel of the vehicle in 1952) from the Canada Cycle Company in Latrobe Street Melbourne, in December 1926. The purchase price was approximately £300.

From there the car was driven some 200 miles to its new home at “Rivery”, a dryland sheep & grain farm about 6 miles west of Watchem, in north central Victoria.

The car served mainly as transport for the family from the farm into town for supplies, which included groceries, farm supplies, benzene & other vehicle servicing needs from the Watchem Garage (in Camp Street). It also attended most Agricultural Shows at either Donald or Warracknabeal for the next 20 years or so. A dent in the front right guard was beaten out by Alex following a collision with a gate post at the Warracknabeal Show in 1937.

A big return trip of about 300 miles was undertaken in the summer of 1938 to Mildura, which took several days of driving on rough Mallee roads to get there & back. Not a problem for the old Dodge - never broke down or even got bogged.

Not much use was had during the Second World War years due to fuel shortage and after the War it was time for the family to upgrade to a more comfortable modern vehicle - a Morris Oxford.

The Dodge Tourer was eventually cut down into a buckboard” for agricultural use in 1951, with parts from an old horse-drawn cart used as the tub. Alex’s son Jack (born in 1929) used the vehicle around the farm & kept it registered until around 1959, after which it was retired to the shed, but later it found itself out in the open, and its condition deteriorated even further.

Jack & his son Peter decided the car should be restored about ten years ago, but due to its condition (& the fact that it was no longer complete) it was not an economic proposition to restore. So, the vehicle was resurrected as an amalgamation of 110-375 and a similar donor car bought at a clearing sale by Peter at Swan Hill in 2011.

Both vehicles were fully disassembled & the best components chosen for the resurrection – the chassis, axles, springs & guards were sandblasted & painted whilst all the timberwork was replaced, using the old pieces as templates. Jack refurbished the motor & gearbox himself and an aged canvas hood was re-fitted .

The car is now on club registration & insured with Shannons. It gets a weekly run from the Rivery farm into the Watchem pub by Peter, and has proven to be a reliable & head-turning form of transport.

There'll be a big celebration in 8 years time for the cars 100th birthday (most probably at the Watchem pub...) 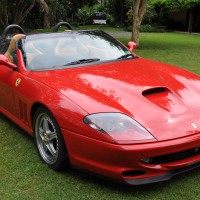 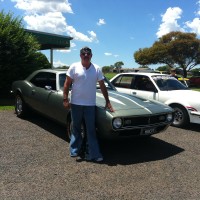 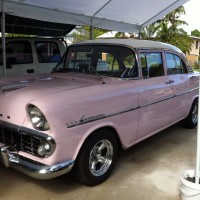