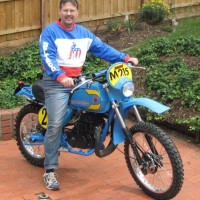 I bought the Bultaco Frontera 370 Mk11 as a rolling restoration project. I had a Mk10 Frontera in my teens and always wanted the Mk11 resplendent in its stand-out blue paint job. Throughout the 60s & 70s the Spanish dirt bike brands of Bultaco, Montesa & Ossa led the way before the Japanese manufacturers eventually dominated. The 1978-79 Frontera was one of the best off-road enduro bikes you could buy. (Sold locally by Bert Flood MC) It had a powerful 370cc 2 stroke engine, 260mm long travel suspension, a side & centre stand, an up-pipe for ground clearance and a tool kit fitted to the fuel tank. It had full ADR so could be legally road registered.
The bike came with many NOS parts including a new cylinder, exhaust pipe, new guard & headlight. Over the next 18 months the Frontera was fully restored to original spec including a powder coated frame, new paint & graphics, new gas rear shocks, stainless steel spokes, all fittings re-plated, new seat cover etc. The end result was a 'Trophy Queen' which looks better than the day it left the factory. 'Bultaco - Built to Go!'