I picked this 244 up to try my hand at restoration. It came from an elderly fellow in Sans Souci who bought it new in 1977, and was originally sky blue.

It had rust everywhere except the chassis and floor pan, so I got to cutting and honing my welding skills. I rebuilt the motor, converted it from 3 speed auto to manual, all factory spec thanks to a pretty complete donor car. After about 15 months of slow work, I had it ready for paint. Originally I was going to restore the factory colour, but having spent so much time on it, I thought, nah, I want this to stand out from the crowd. So I was a bit cheeky and borrowed a colour from Saab, Monte Carlo Yellow. I painted it in acrylic with a white basecoat and no clearcoat. 18 months later all my work seems to have held up. There's a rust spot in one spot on the guttering, which is not surprising given how hard that area was to weld, but other than that it's going well.

The car is a dream to drive, and as it's basically all new and sees only a few thousand km of travel each year, it requires very little maintenance beyond basic servicing. The wheels are Geminis, originally from late-80s Volvo 740s, but I think they are probably the single nicest wheel Volvo has ever produced, and had to have them on the 244.

The interior is all original and in great condition. I made a single change - I added a digital radio and a pair of 6x9 speakers on the rear parcel shelf. I didn't have the heart to cut into the door cards, so it's a 2-speaker system only, though there is space under the dash for a single 4x6 front speaker.

It rides on Bilstein touring shocks and King lowering springs (in the rear) and DVS Performance (based in Victoria) front springs, which give it a nice rake.

Currently in the works is a B21A motor with Volvo R-Sport blow-through carby turbo kit. These kits are extremely hard to come by and the one I found was in poor condition, so I am slowly rebuilding everything up. I am excited to have probably the only running R-Sport carby turbo Volvo 240 in Australia. 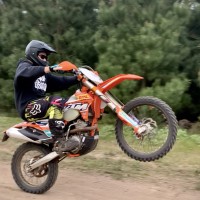