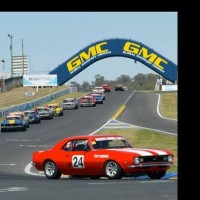 this chevy was bought new by a farmer in kyabram it was used for many years as a family toureer , during the depreshen it was converted to a pickup and use for a few years on the farm, when a new vehicle was purchased the old chevy was driven into the hay shed where it stayed for over 40 years , it was only out side for four weeks because the hay shed fell down and a new one had to be built, i bought it from the nephews of the original owner in 2014