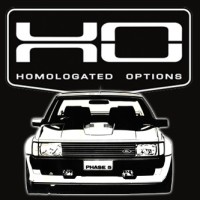 Wayne Draper designed Falcons at Ford (XB to EA), and was the brainchild behind the Phase 5 & 6 Falcons under the HO Phase Autos banner in the early 80’s. Along with Murray Carter he got the XD and XE onto the race track. After Ford abandoned HO, they gave the name to Wayne to help him and Bob McWilliam sell the Phase 5 and 6 through dealerships so the Falcons were eligible to race. His son Rob keeps the flame burning at HO Phase Autos to this day.

HO Phase Autos (builders of the Phase 5 & 6 and Allan Moffat EB Falcon) are the original manufacturers of the Group C racing Falcons and they're still going strong. This Series II Phase 6 is HO’s pride and joy. It was Wayne Draper's final build.

The Series 1 Phase 6 was altered (like the Phase 5) to fit CAMS regulations.

For the Series II, Wayne has put XF mirrors and door trims on the car, which he originally intended to do with the XE, but didn’t because Ford wasn’t ready on the manufacturing side.

Another Wayne Draper design was the ESP Snowflakes of the 80’s. Wayne made sure some wide ones were put on this car to fill out the flares. If he'd had his way, this is what the ESP's would have looked like. Afterwall, the Group C XD (Phase 5) was his original design for the GTHO before Ford dropped out of motor racing.

Hope you guys enjoy the car as much as we do.